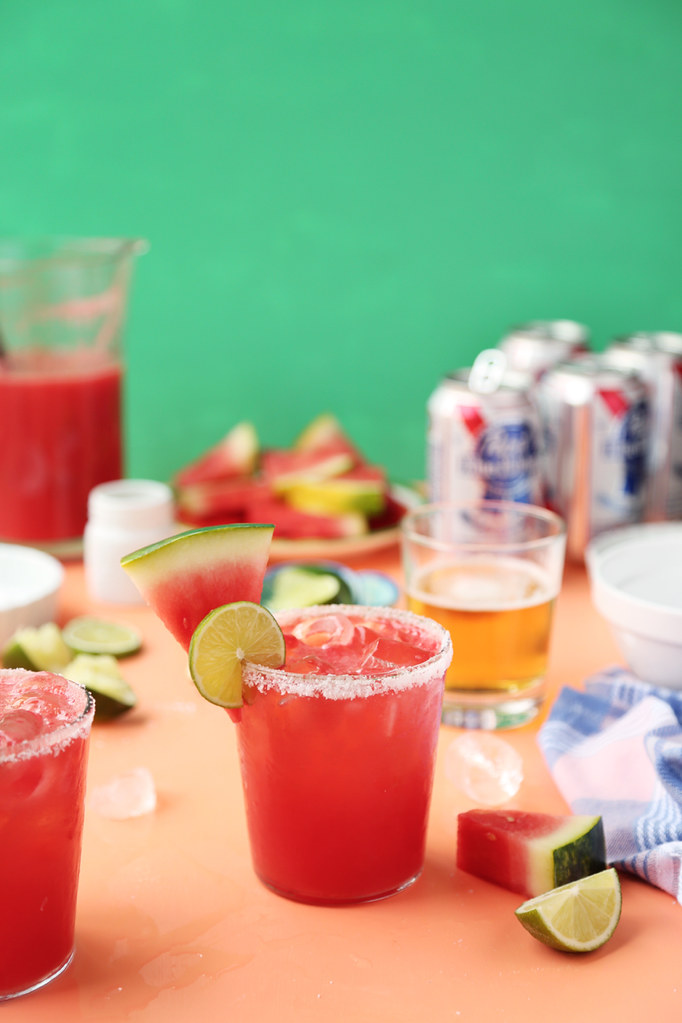 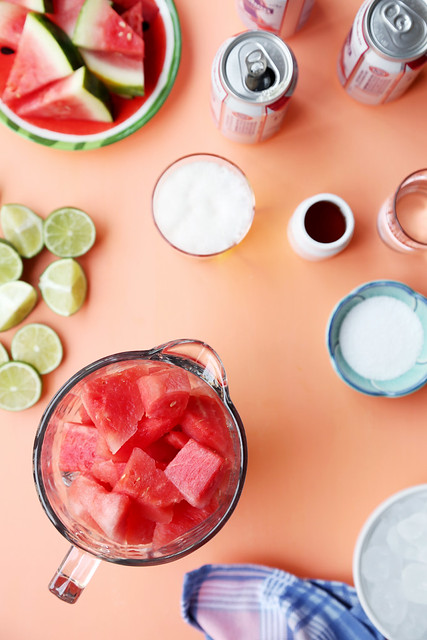 Start by cutting a small watermelon into chunks and placing the chunks into a blender. Blend on high until completely smooth. Pour the watermelon juice into a large pitcher, through a fine mesh strainer to remove all of the pulp.

**Tip: If you’re using a larger watermelon, half will be more than enough. Also, make sure it’s seedless. You don’t want to be sitting there picking out all of the seeds. Sounds like a hassle. Sounds like more time working than drinking which we can’t have.** 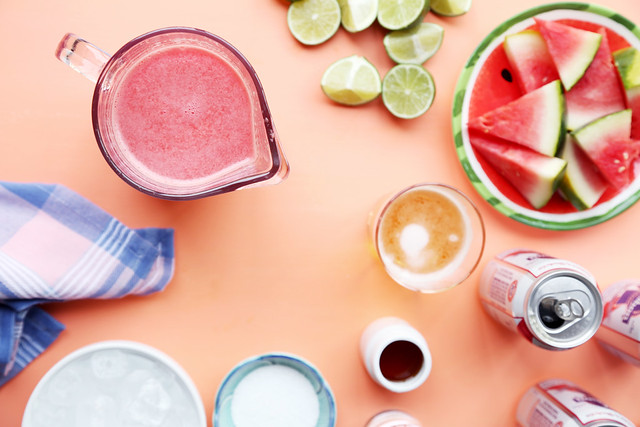 Pour in the orange liqueur and tequila into the watermelon juice and stir until well combined. Place in the fridge and allow to chill for at least 30 minutes.

**Note: You can add as much or as little tequila as you’d like. Keep in mind that we will be adding beer to the cocktail later on as well. If you want to keep things simple with just beer, you can omit the tequila and use fresh squeezed orange juice instead of the orange liqueur.** 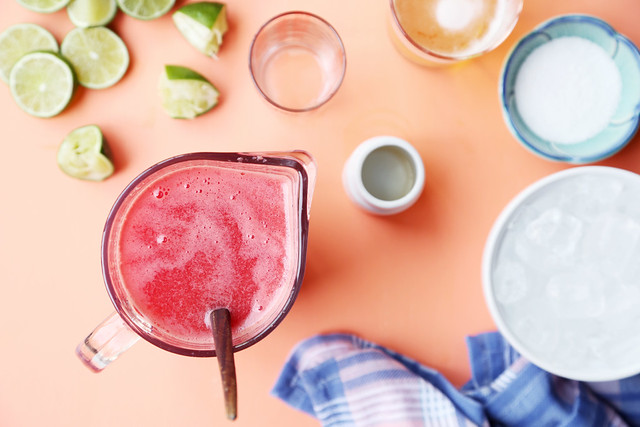 Right before you’re ready to make and serve the cocktails, you can prepare the glasses. I’m using short glasses for this margarita (in case you were wondering, which I’m sure you were). Dip the rim of the glasses into a small dish filled with lime juice and then into another dish filled with coarse salt. 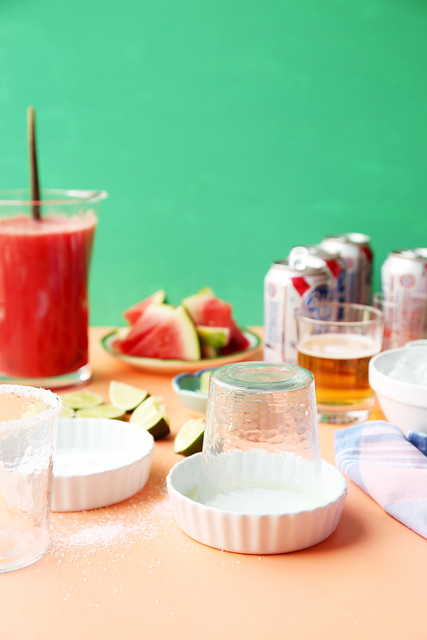 I think this margarita (because of the beer) is better served over ice instead of blended. Which is tough for me to admit because I love a blended margarita. Fill the glasses with ice. 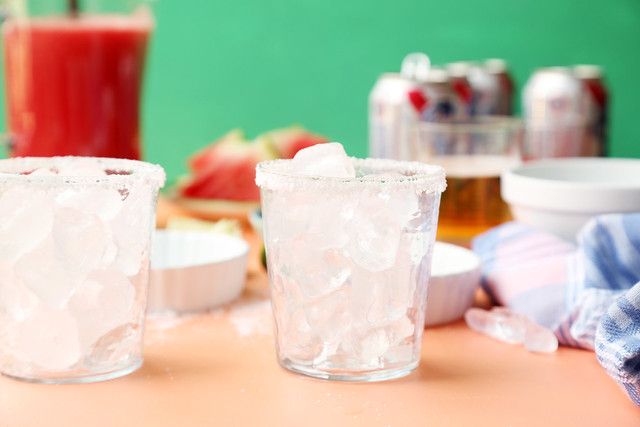 Pour in the chilled boozy watermelon juice we made earlier (give it a stir because it might separate in the fridge), about half way up. We need to leave room for the beer, which is the main ingredient in this cocktail. 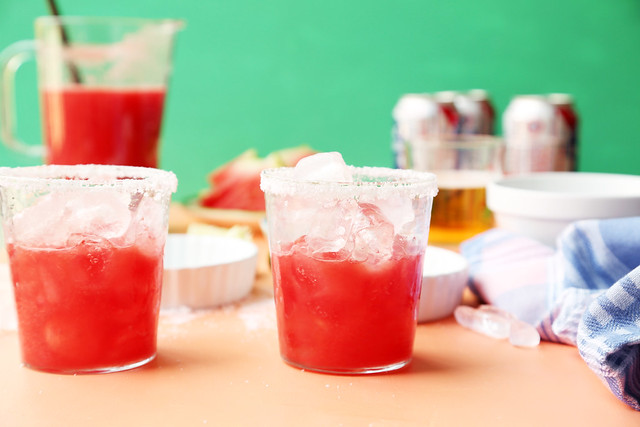 Top off the cocktails with the beer and give them a gentle stir.

**Tip: I’m using Pabst Blue Ribbon, but any other pale colored beer that you prefer will work great for this. You can even try it with corona!** 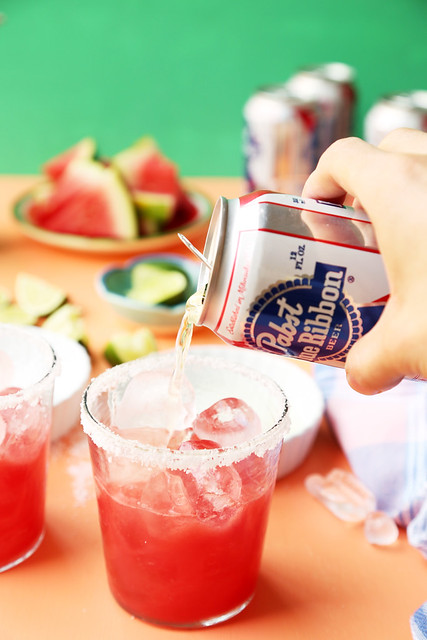 It’s not a cocktail until there’s some sort of fancy garnish so finish of the drink with a lime slice and a watermelon wedge. Garnishes officially make the cocktails what they are. You can quote me on that. 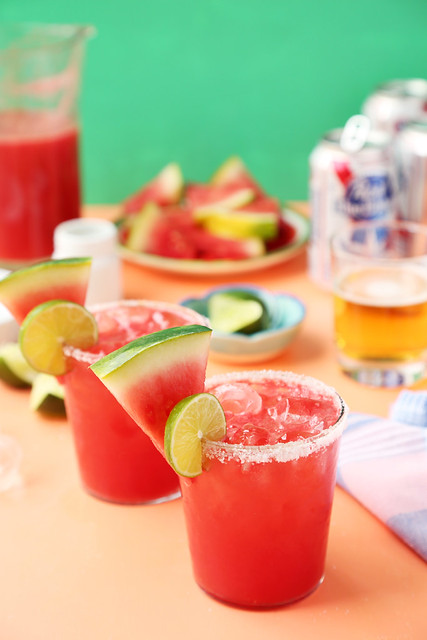 You can do the same thing with fresh strawberries, raspberries or pineapple. Really you can do it with a lot more than just those but those are the first fruits that popped into my head and the ones that sounded super delicious to me at the moment. Blend whatever fresh fruit you like (within reason, don’t get carried away and blend pears or whatever) and strain out the pulp and seeds. You’ll be good to go. I chose watermelon, again, because it’s my favorite fruit but also because the mini watermelons were on sale this week at the grocery store. 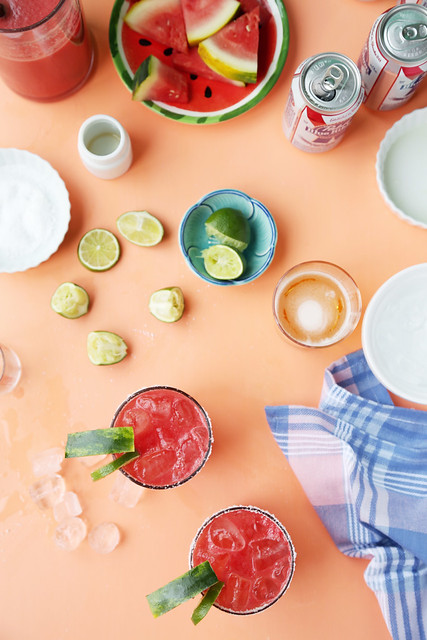 I like making these for a party or gathering during the summer (or just any regular day in LA since it’s always hot) because you I can easily make a giant pitcher of this stuff and just top the cocktails off with the beer as I need them. Everyone can kind of just make their own so it saves me from the hassle of making cocktail all night. Try it at your next party. Fill large pitchers or those fancy juice jugs with the spouts, with the boozy watermelon juice and then have a few different beer options for people to juice from. It’s a great way to get people interacting at the party but also to get them to do all the work for you. Shhhh. 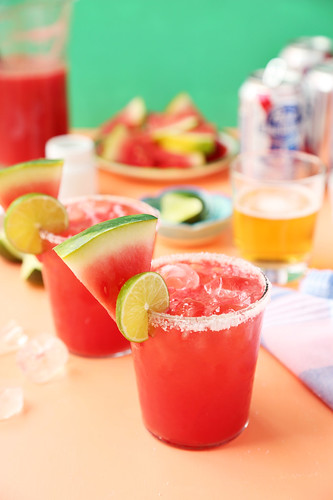 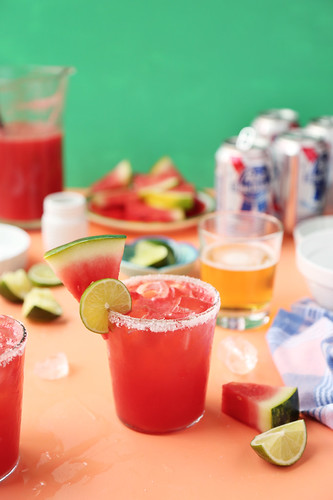 Just in case you need a bit of inspiration, I like to make these on Friday after work, or Saturday afternoon with a batch of this Mushroom and Chorizo Queso Fundido from the site. They compliment each other so well. But this cocktail is also great with my Kale and Artichoke Dip. Either way, you need to make some dip and drink some cocktails this weekend. You won’t regret it. Enjoy! 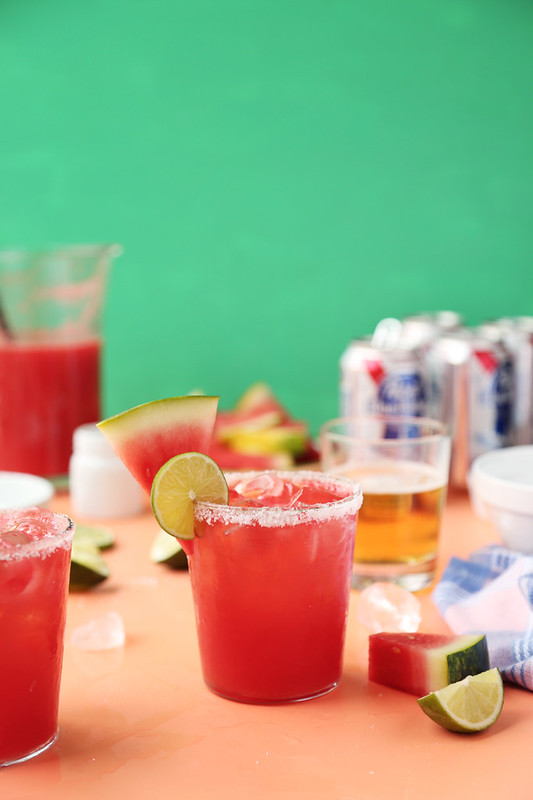 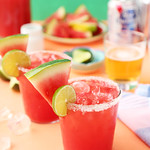