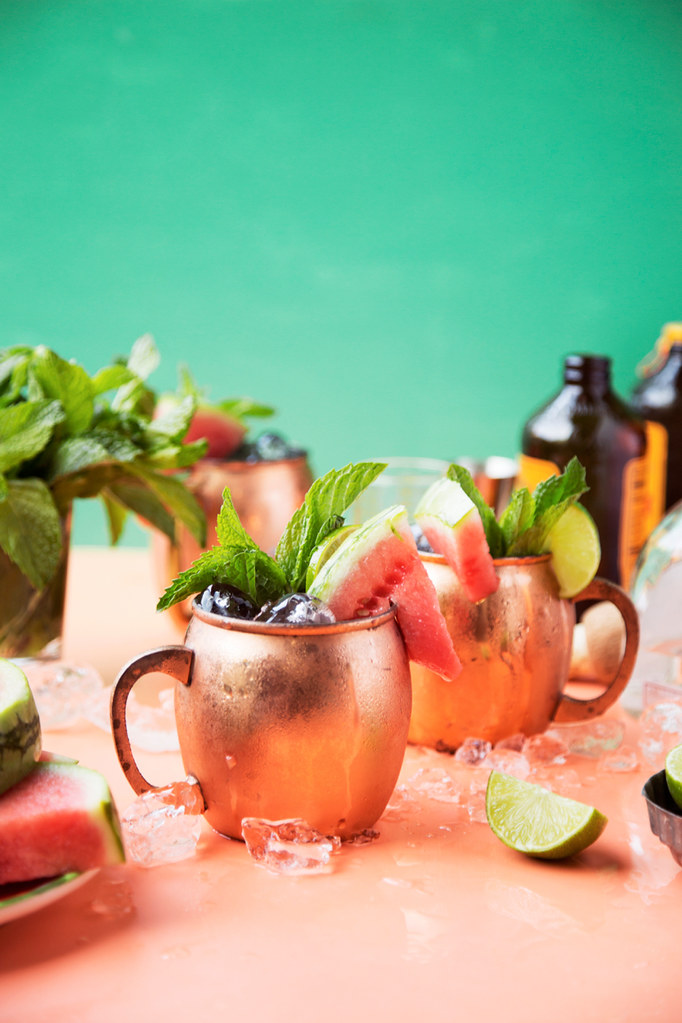 It’s September. Saying the year is flying by would be a severe understatement (and make me sound like a grandpa), but I’ll say it anyway. The year is just flying by. September marks many an exciting occasion. It’s the beginning of the end of summer. I’m excited about this in particular because in case you weren’t aware already, I hate the summer. Before you start coming at me with pitchforks though and begin calling me a freak, let me be more specific. I hate the sun and everything about the summer weather. Hot and ever so slightly humid days and nights under the scorching sun are not for me. Summer I put a curse on you. Now be gone. There, I think I cleared things up. September also means that autumn is right around the corner which means Halloween is almost upon us which means Thanksgivings isn’t too far away which means Christmas is basically next week. Basically.

The most important thing about September though is that last year September Julian and I took that giant leap and made the big decision to move in together. This means that we’ve officially been living with one another successfully for 1 year. We’ve got 365.242 days under our belt, there’s like a million more days to look forward to. I’ve learned so much about living with someone else (other than my family of course), but not just in general, I’ve also learned a lot about myself. It can be difficult and scary having to adapt to someone else living in the same space as you. I mean hello, you’re bringing two different adults together. That’s two different personalities, two different ways of thinking and two very different methods of doing and folding laundry (my way is the right way). It isn’t always fun and games, although for the most part it is nothing but fun and games. Everything in life takes time and I feel like with each day, week and year, it only becomes easier and even more natural. It’s important to remember that you’ll have your ups and downs and you won’t always agree with one another, but it won’t be the end of the world. Eventually you start getting into a rhythm that works for the both of you, and you find the perfect balance between the two of your ways of living.

Among the many things I’ve learned this past year, here are some of the highlights. 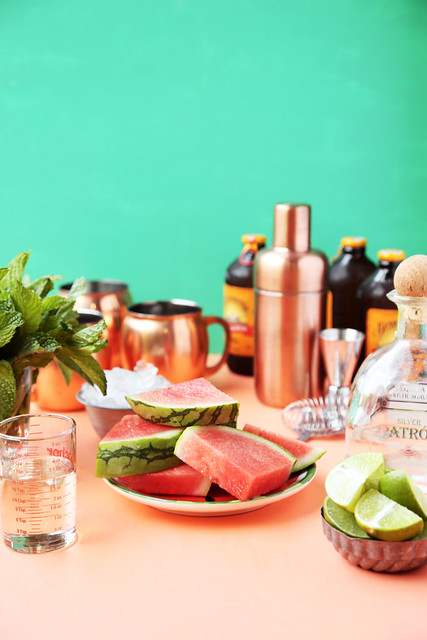 This is a fairly easy drink to make which happens to be really important because it is Friday and when we want a drink, we want it right away. Thirst waits for no one. 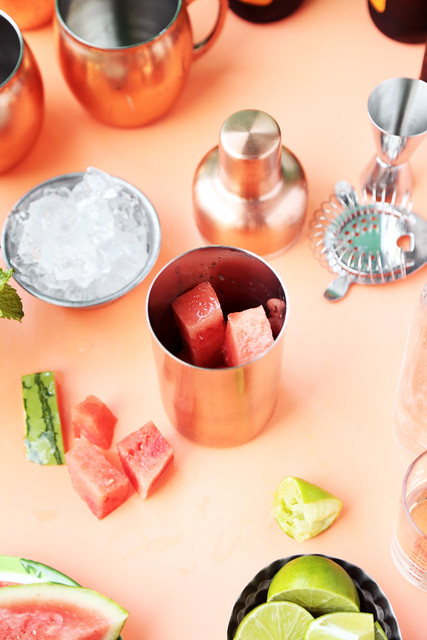 Cut the watermelon into large chunks and throw it into a cocktail shaker.

**Tip: I’m not one for breaking down a giant watermelon (who has that kind of skill?), so I just use those small personal watermelons. Grab one, cut it in half and cut half of it into chunks and the other half into wedges, for garnish! No fuss no muss.**

Add the simple syrup and lime juice to the watermelon, and then muddle into a pulp using a wooden muddler or spoon. 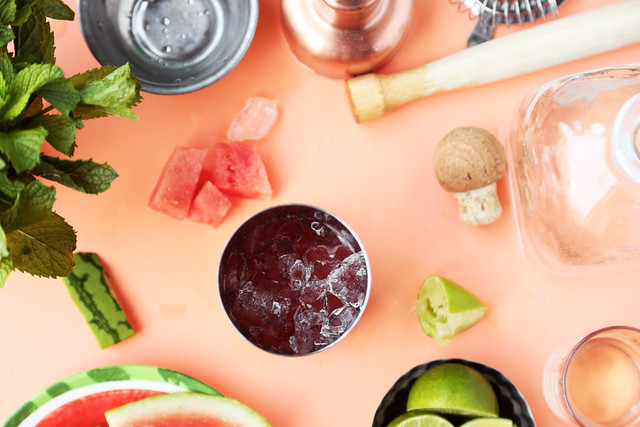 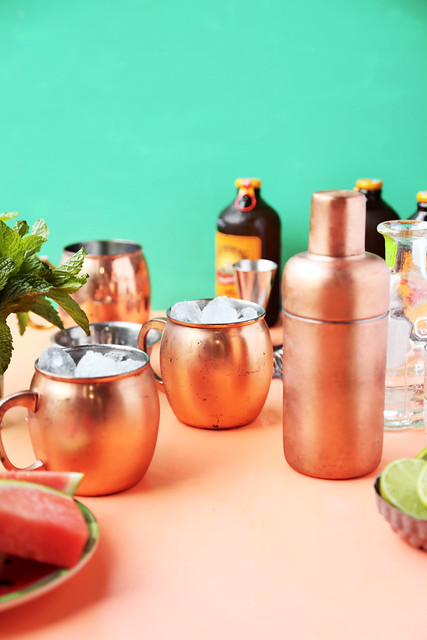 Traditional Moscow Mules are served in copper mugs, like the ones I used. If you want to keep things traditional you should grab some. You can find them online or at some kitchen supply store. I know, they’re more than a few dollars so it’s definitely not necessary. Any glass will do. In the end, we’re just looking to get our drink on, no matter the glass it comes in. 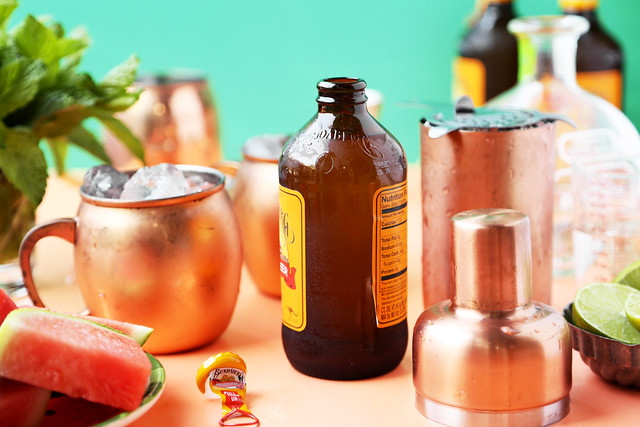 Let’s talk about ginger beer for a second. It’s good, it’s bubbly, and it’s like ginger ale but 100 times better. It’s stronger in ginger flavor and it happens to be nonalcoholic (despite it’s name) so anyone can have it.

Pour the cocktail into the prepared glasses, dividing it between the two. Then top each off with a splash of ginger beer. 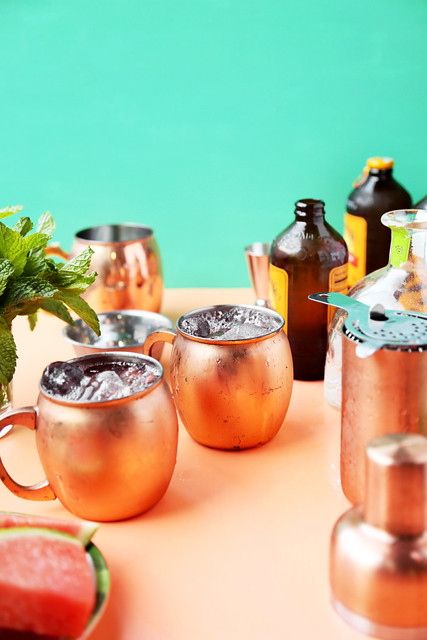 Because we’re fancy people, and we like to impress, let’s not forget to garnish our cocktails with a sprig of mint, a lime wheel and a wedge of watermelon. 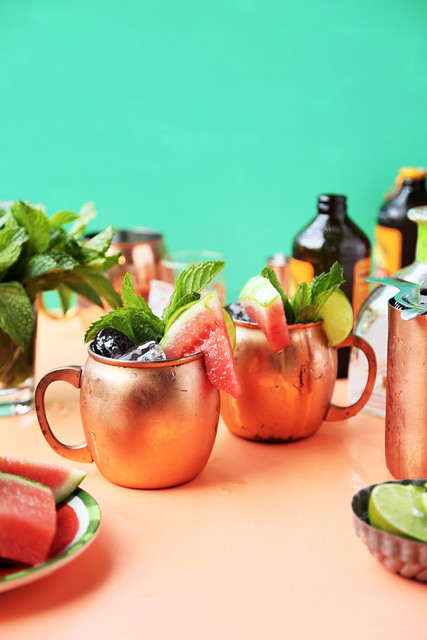 A traditional Moscow Mule, which is what this is based off of, is made with vodka. You can definitely keep things traditional and just have a watermelon Moscow mule with the vodka or you can be adventurous and try it with the tequila or switch things up even more and use Irish whiskey instead. Then you’ll have an Irish mule. Any one of those will work perfectly in this recipe. 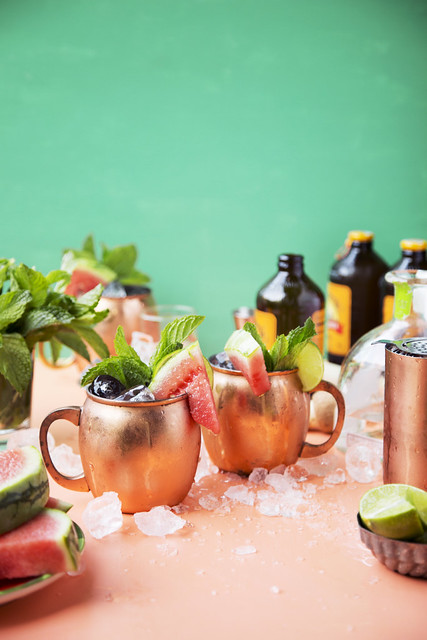 If you’re feeling super brave you can swap out the watermelon for any other fruit that is in season. Strawberries, raspberries, blackberries, pineapple and even kiwi would be amazing in this drink. I think the only way to decide which one is better is to make one of each and then decide for yourself. We’ll call it research. No one needs to know. 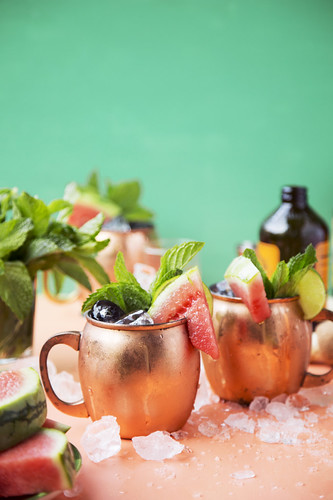 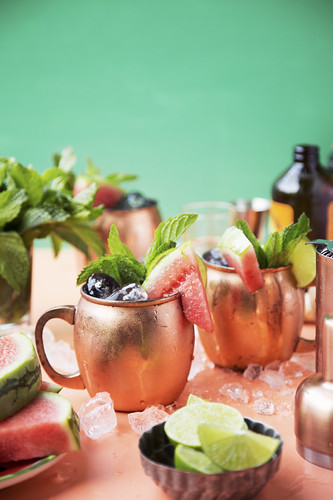 **Tip: If you don’t like a watered down cocktail, cut watermelon into cubes and freeze overnight. Then fill your glasses with the frozen watermelon instead of ice and when it thaws, it won’t water down your drink. Then at the end, you’ll be left with boozy bites of watermelon perfect for snacking on. It’s a win win either way.** 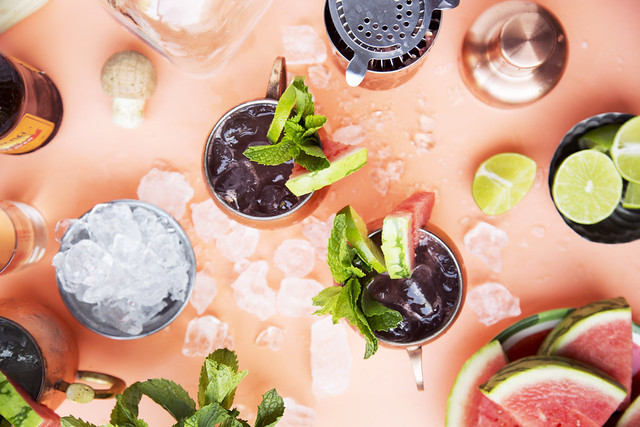 Just in case you need a refresher course on simple syrup. Remember that it’s equal parts water and granulated sugar. Combine 1 cup sugar with 1 cup water in a saucepan. Set over medium heat and bring to a rapid boil. Lower the flame and simmer until the sugar has completely dissolved and the syrup has started to thicken. Remove from heat and allow to cool down completely before using in your cocktail.

**Tip: You can transfer any leftovers to a mason jar with a tight fitting lid and store in the fridge for up to 1 week.** 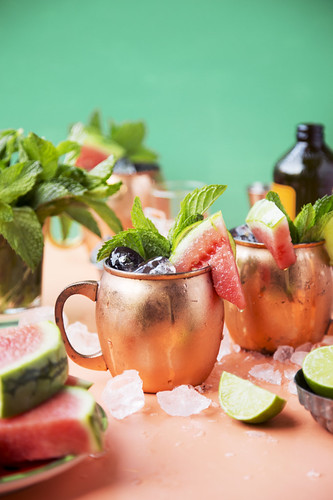 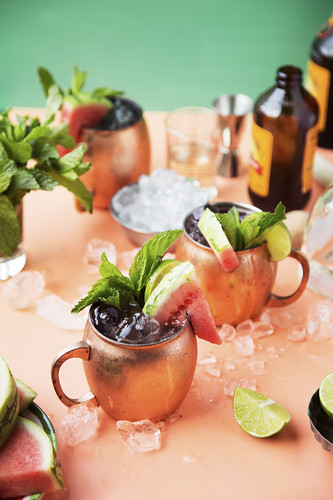 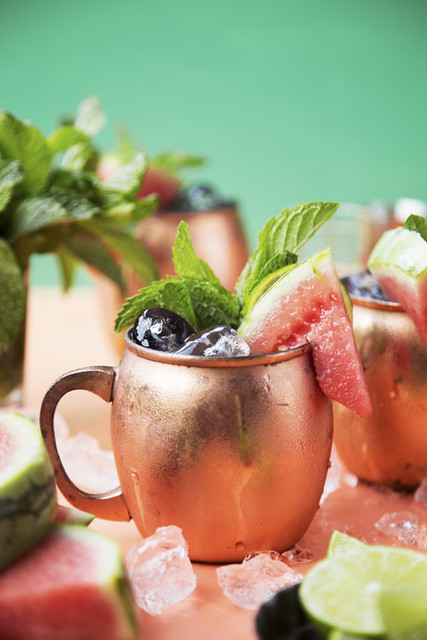 Summer might be coming to an end soon, but we can still keep it going with these Watermelon Mexican Mules. With labor day right around the corner let’s shake things up and step away from the drinks we’re used to. Be adventurous with your cocktails and step outside of the box. Take advantage of the face that watermelon is in season and remember that tequila is your friend. Enjoy! 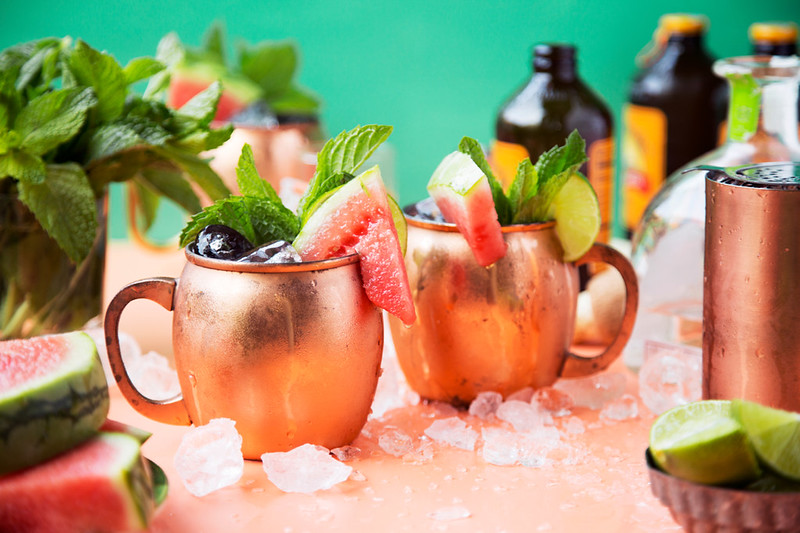 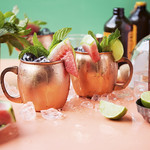 Print
Prep time
5 mins
Total time
5 mins
These are a great summer drink that takes the traditional Moscow Mule and reinvents it with the help of fresh watermelon and tequila.
Author: The Candid Appetite
Serves: 2 cocktails
Ingredients
Instructions
3.5.3226