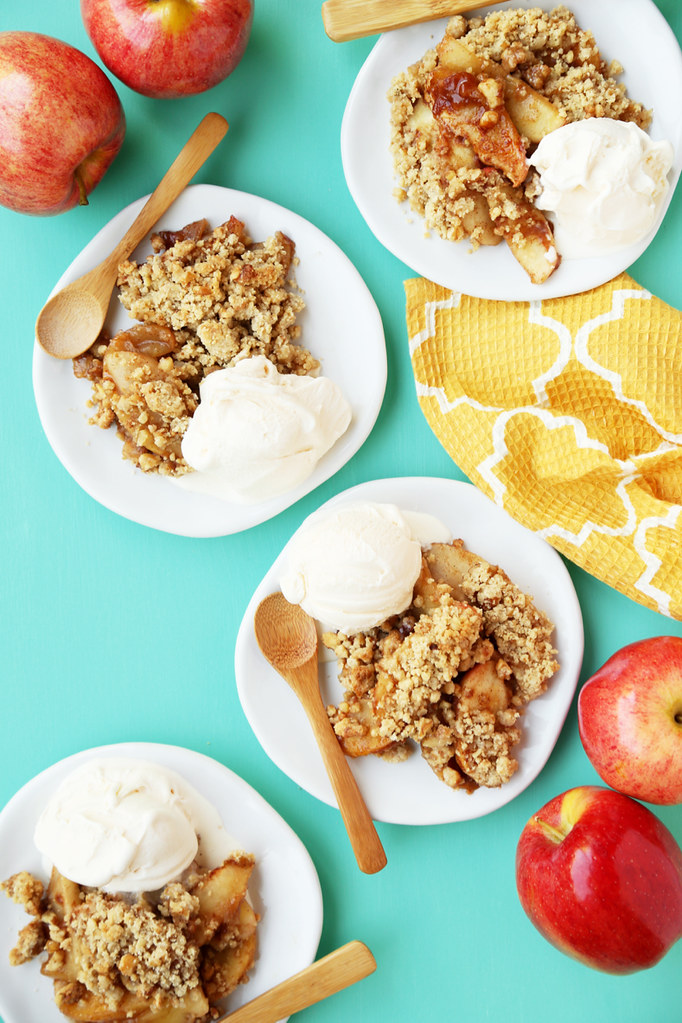 I wanted to take a second to tell you all about my friend Billy’s (creator of Wit and Vinegar) new book, WHIP IT UP! If you like fun, easy and in your face recipes, then you and this book will be the best of friends. Do yourself a favor and pick up a copy right now, and get to cooking because you’ve got a lot of catching up to do. The recipes are definitely the kind of dishes you’ll want to make over and over again. I like that nothing is too complicated and each one of the recipes are easily attainable. Did I mention there’s an entire chapter dedicated to TACOS?! Tacos! Yes, tacos. I’m all for any book that has a chapter in the name of one of my favorite foods. 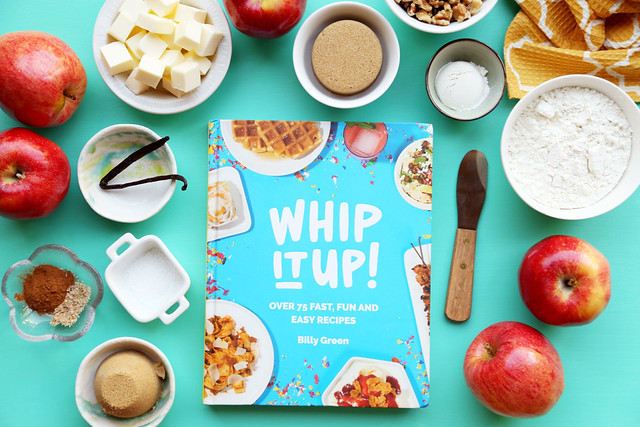 Since it’s autumn and since apples are looking so good at the grocery store right now, waving at me to buy all of them, I thought it would be best if I made the Vanilla Apple Crumble from the book. I think it was the best decision I’ve made all week. Also because I was really craving ice cream and for whatever reason I thought my choices in life would be much more acceptable if I ate the ice cream on top of a warm dessert involving fruit. I like fruit desserts because then I don’t feel too bad about eating something sweet. And if I go in for seconds, I just tell myself, “Self, go ahead and have that second helping. Fruit is healthy. Nothing to worry about here. You’re making the best decisions today. I’m so proud of you, self.” Then I go about eating a second helping, even bigger than my first because I just told myself how awesome I am, and I deserve it. 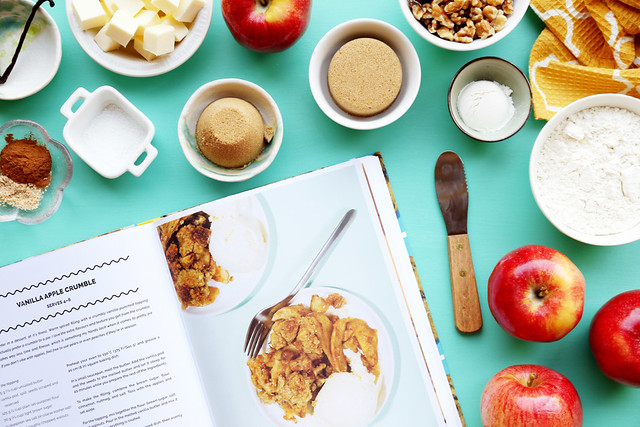 Let’s start by infusing some butter with vanilla, because we’re that fancy but also because…we’re that fancy. Melt a stick of butter, low and slow, in a small saucepan and then add a vanilla bean, that you’ve cut down the middle and scraped out the seeds. Throw the seeds and the pod into the butter. Remove from heat and let it do it’s thing aka let it cool down and infuse.

**Note: You can find vanilla beans in almost any store nowadays, right in the spice aisle. It usually comes in a jar (one or two pods per jar). It can be a little pricey, but well worth the flavor. I promise.** 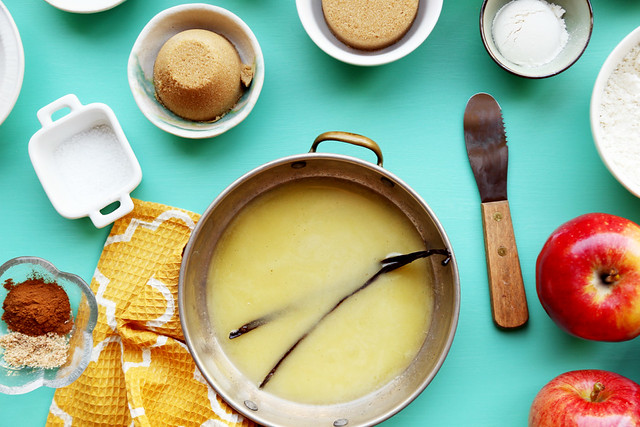 Meanwhile, cut the apples and place them into a large mixing bowl. Toss with the sugar, flour, cinnamon, nutmeg and salt until fully coated. Set aside.

**Tip: Fuji or gala apples work really well for this recipe, but any other firm tart apple will work great! Pick your favorite!** 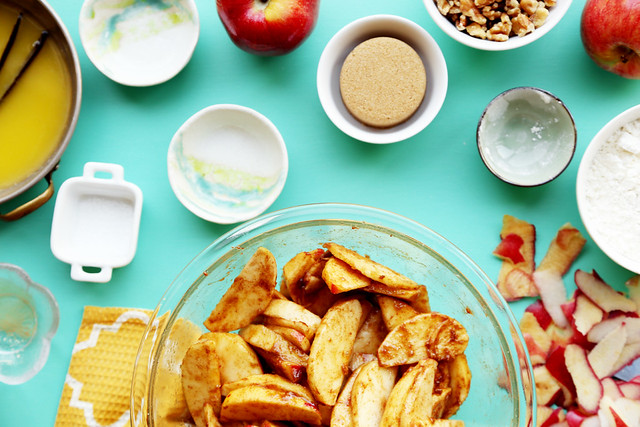 Once the butter has cooled, you can discard the vanilla bean pod and then get working on mixing together the crumb topping. Which if you ask me is the BEST PART of any crumble. In a large bowl, combine the flour, sugar, salt, walnuts, and vanilla butter. 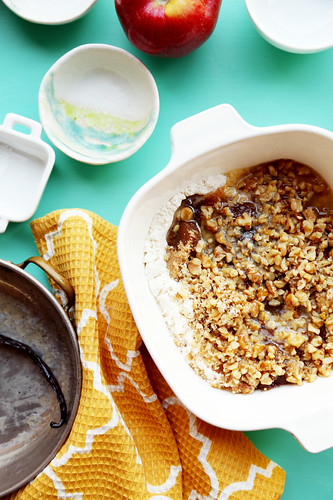 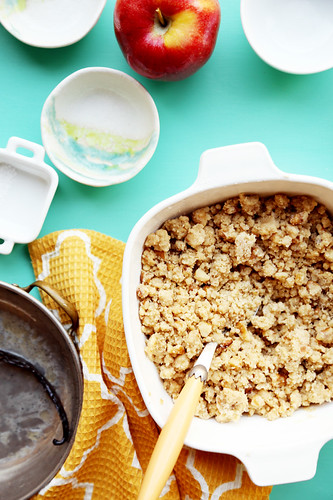 Pour the apples into an 8 by 8-inch or 9 by 9-inch square baking dish and then top with the crumb mixture.

**Tip: You can also bake this in an 8 or 9-inch cast iron skillet if you have one of those on hand. That would make this dessert look rustic and you can take it right to the table to serve after dinner and everyone will be impressed and think you’re a cooking prodigy. Doesn’t that sound nice?** 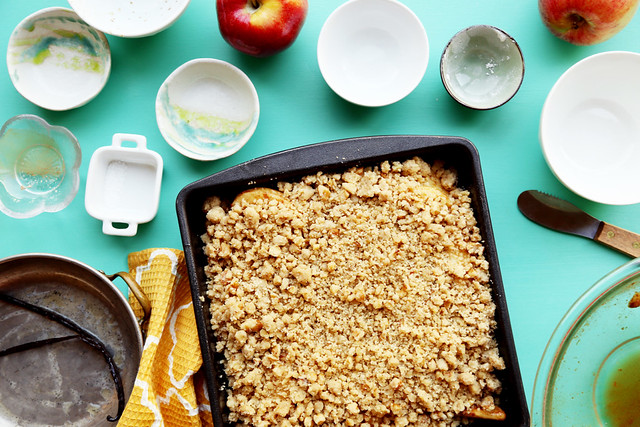 Bake the crumble until golden brown and bubbly around the edges, about 30 to 40 minutes. I like to rotate the baking pan halfway through baking so that it browns and cooks evenly. I don’t know about you, but my oven can be a bit janky (yes, I just said janky) sometimes so, it’s best to rotate whatever I’m cooking in there and checking it a bit before the time stated, is an even better idea. 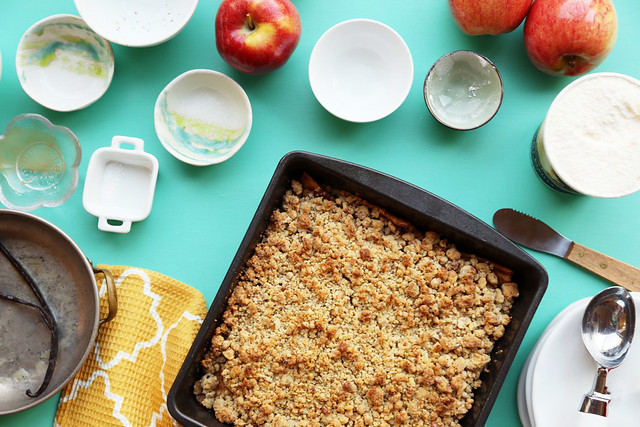 Let the crumble cool for a few minutes, so that you don’t burn your mouth and tongue and yell out obscenities and then everyone in your house/your next door neighbors think you’re insane. Not that that’s happened to me before or anything. I’m just saying. Total hypothetical. 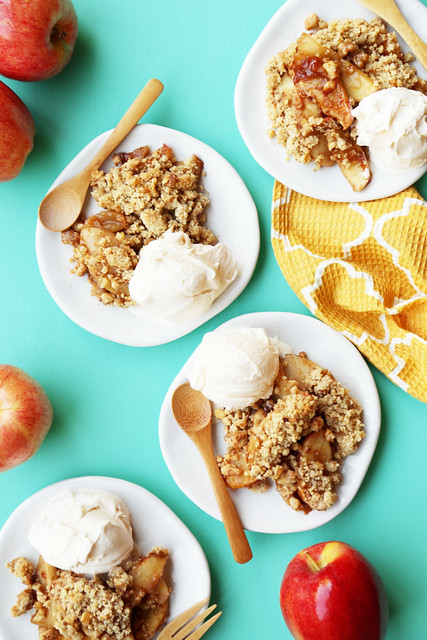 Serve the crumble warm with a scoop of vanilla ice cream. The ice cream is a must. Make sure you have some on hand before you make the crumble. If you don’t have any in your freezer, take off those fuzzy slippers (or go like that) and run to the grocery store for a tub of vanilla bean ice cream. You’ll thank me later. I know it. 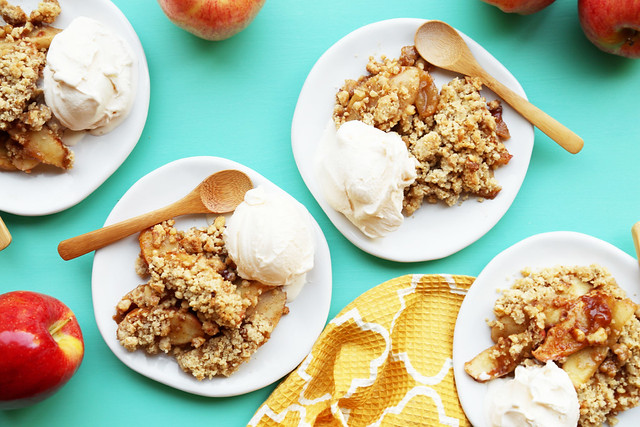 You can make the crumble in advance, bake and cool completely. Then just wrap in plastic or aluminum and store in the fridge until ready to eat. Rewarm in a preheated 350ºF oven for about 10 minutes before serving. This would be a great dessert to make if you’re having a dinner party or gathering of some sort. It’s a real crowd pleaser. 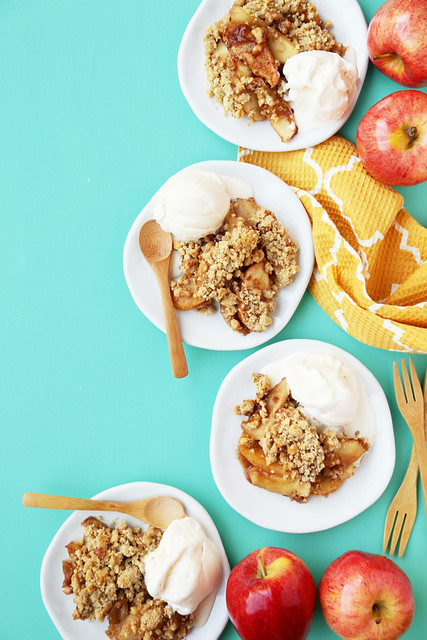 If you really want to be decadent and you just don’t care about anything in life, a drizzle of salted caramel, or just regular caramel I’ll forgive you, would be amazing. Scratch that. It would be life changing. Caramel, warm apples, crisp crumb topping and ice cream are meant to be together forever. No matter what you do this week/weekend you totally need to WHIP IT UP! 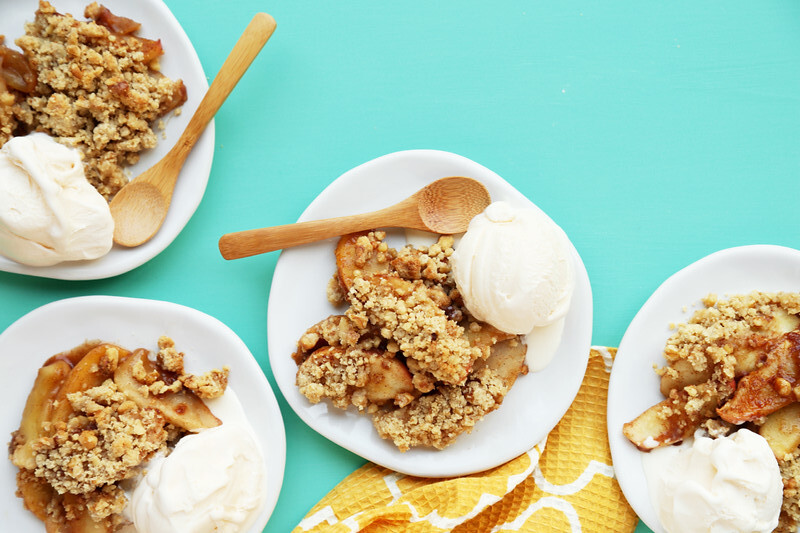 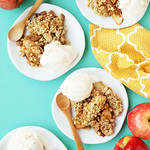