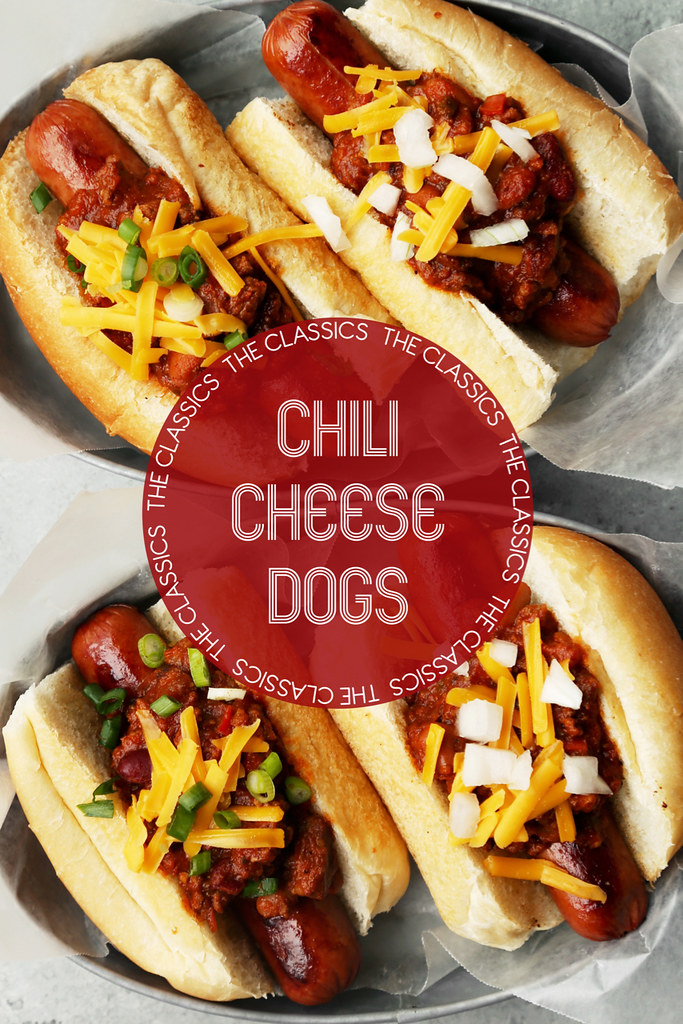 Perhaps you guys can help me settle a long time debate I’ve had with everyone in my family. Actually, with all the strangers I’ve ever come across in my life. I won’t say that I always ask the same question to every single stranger I encounter, because that would make me a weirdo freak, but I also won’t say that I don’t ask the same question. I insist that the hot dog links themselves are called weenies. That’s what I’ve always called them, even when I was a kid. Somehow though, everyone always laughs at me and tells me that they’re actually called hot dogs. We end up getting into a big debate because how else are you supposed to distinguish the weenie and the weenie and bun combination from each other? Weenie is the proper name. I know it. You know it. And it’s about time everyone else knows it. I think you all should leave a comment down below and tell my family how wrong they are. Jonathan knows best. Weenies for life! (End rant).

Let’s really get down to business now. It’s time for another installment of The Classics. It’s been a while since we’ve talked about classic recipes on here and I think that now is a good time as any. The last time around I was tempting you with a Yellow Cake covered in chocolate buttercream frosting. A real childhood favorite of mine. I’ve been doing this classic series for a while now and just in case you don’t remember some of the other recipes, I’ll happy to refresh your memory. That’s what I’m here for. We kicked things off in the first installment with Buttermilk Fried Chicken. The fried chicken of your dreams. We then moved on to some of America’s favorites like Cinnamon Rolls, Apple Pie, and Bacon Cheeseburgers. Click on the links and experience them for yourself.

The biggest piece of advice I can give you at this very moment is that you really need to be putting chili and cheese on top of everything this summer. Everything. Don’t you dare let the season end without making a big pot of chili at least once. If you make it more than once, you’ll be my new best friend, though.  I know what you must be thinking, “Jonathan, it’s so hot during the summer! Why should we make a big pot of steaming hot chili, slaving away in the kitchen over a hot stove stirring chili all day long?! That’s madness!” Well, when you put it that way it does sound a little kooky, but come on people…it’s chili! Chili never needs an explanation. I shouldn’t have to force you to make chili. That’s blasphemous. Just in case you weren’t convinced enough though, I decided that hot dogs topped with chili and lots of shredded cheese needed to be involved. They’re invited to the party and they want you to celebrate with them. Are you going to leave them hanging? These chili cheese dogs are calling out your name. I think you better answer. It’s the only way to celebrate the summer. Trust me. 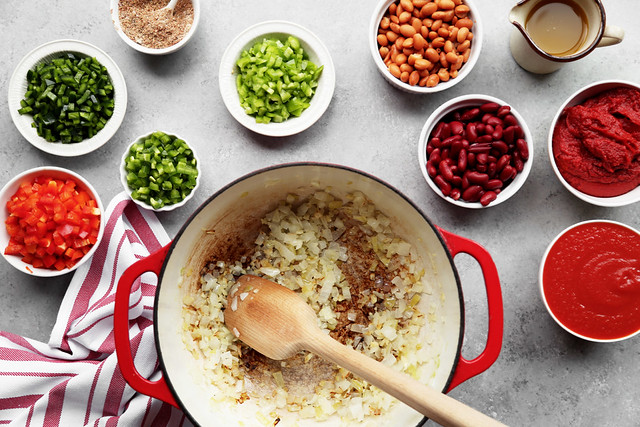 We’re not going to go crazy and make homemade buns or hotdogs or anything. I’m not that cool. But we are going to make the chili from scratch because that is the most important part of this post after all. Let’s start by sautéing the onions and garlic first. Then throw in the remaining veggies. 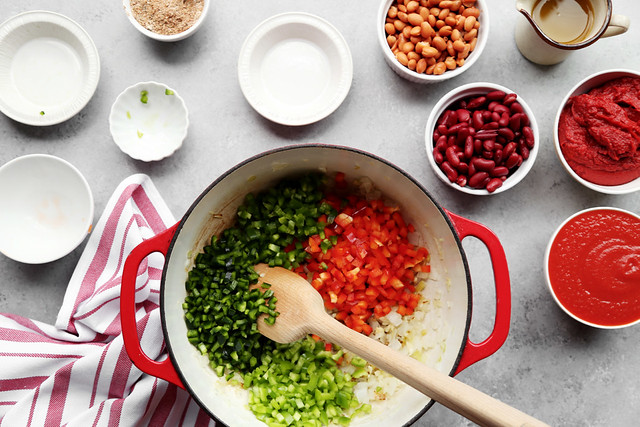 Stir everything together along with all the vegetables and allow to cook for a couple of minutes to soften, about 4 to 6 minutes. Make sure to stir every once in a while so that it doesn’t stick to the bottom of the pot and burn.

**Tip: I like using a heavy duty dutch oven to make my chili in because I feel like the heat is more consistent but also it keeps all of the flavor in better because the lid is so heavy. If you don’t have one, a regular pot with a tight fitting lid will do.** 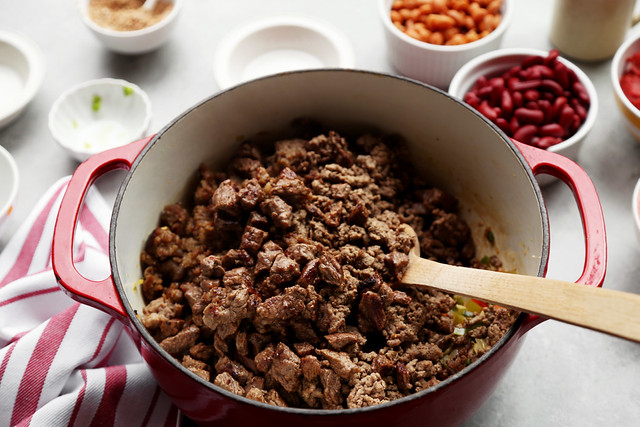 After the vegetables have softened and begun to brown, you can add the browned meats. For added flavor and color, I like to brown the meats separately in a separate pot or skillet and then add them to the vegetables.

**Tip: I’m using three different types of meat for this chili. Ground sirloin, ground Italian sausage, and boneless chuck roast that I diced. You can use all ground sirloin though if you prefer!** 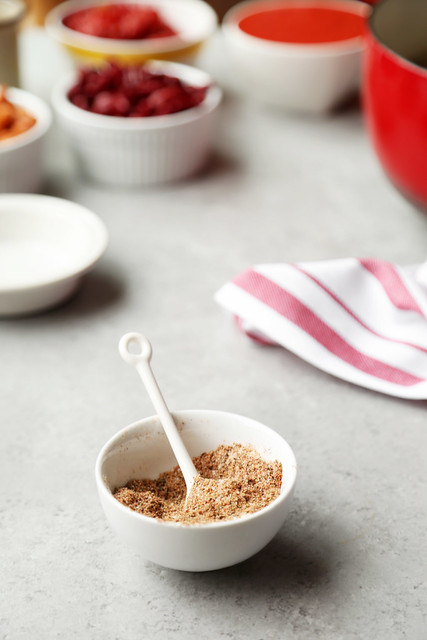 I just combined a bunch of spices and seasonings in a small bowl. You can use all of them (if you have them on hand) or use whatever you have on hand. Here’s what I used: Salt, pepper, chili powder, paprika, ground coriander, cumin, granulated garlic, granulated onion and dried oregano. Add to the pot, give it a big stir and allow to cook for a minute or two. 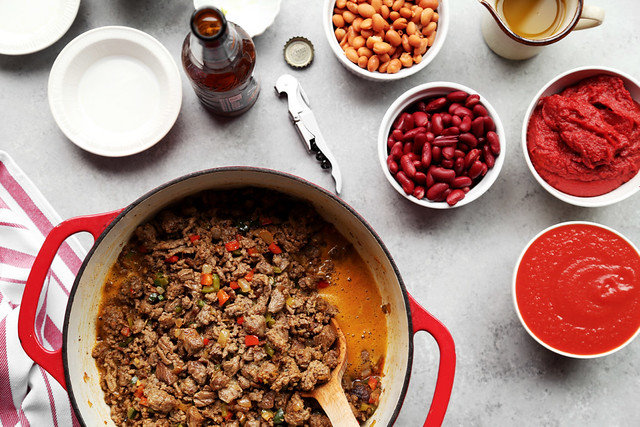 At this point there’s going to be a lot of bits and pieces stuck to the bottom of the pot. That’s all flavor, I promise. So in order to pick up that flavor, we need to deglaze the bottom of the pot. I’m deglazing it with beer because chili and beer just go together. I used a Sam Adams Lager (not promoted, just what I like for chili).

**Tip: If you’re not an alcohol drinker, you can omit the beer and just pour in the beef stock at this point. The stock will still pick up those bits and pieces from the bottom of the pot.**

Next, stir in the tomato sauce, tomato paste, and beans. 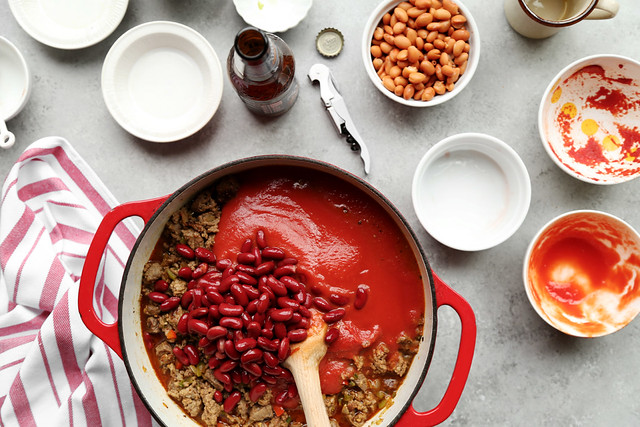 Stir everything together once again, lower the heat to low, cover and allow to simmer for about 2 hours. Make sure to stir the chili every now and then, to make sure that it isn’t sticking to the bottom and burning. That wouldn’t be good. Also keep in mind that it’ll be bubbling and splattering as soon as you open the pot so be careful. 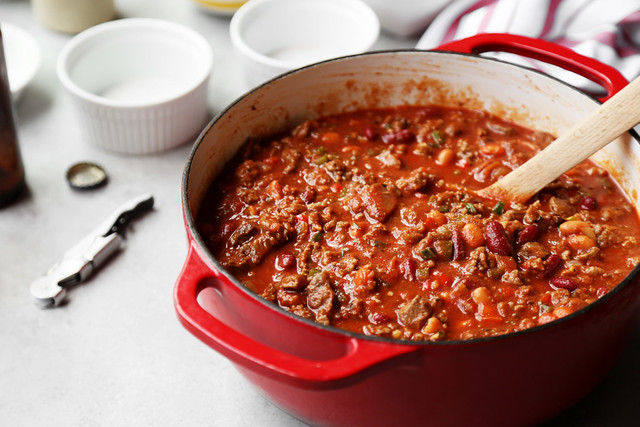 **Note: The longer the chili sits on the stove, simmering away, the better tasting it will be. Also, it’ll only get better the next day and the day after. Trust me on this. Chili takes its time to mature.**

When you’re ready to eat you can serve it by itself with the usual toppings, or you can serve it with spaghetti. There are a million different ways you can eat it. It’s the bomb dot com in baked potatoes, but it’s also amazing on hot dogs. These are chili cheese dogs after all and so hot dogs are a must. 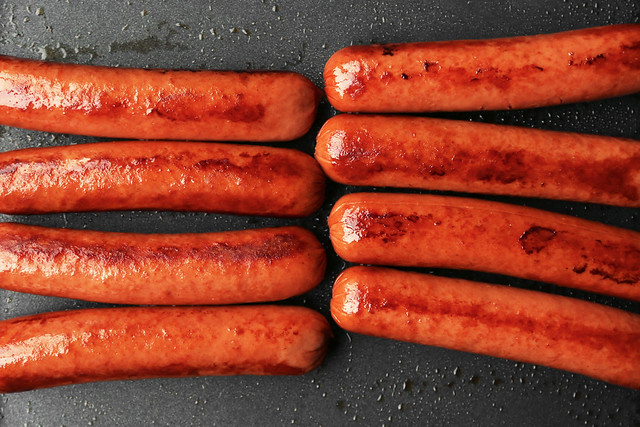 If you’re not a crispy dog kind of person, feel free to boil or steam them. I know that some people, depending where you’re from, have some pretty strong opinions when it comes to hot dogs. I like crispy and charred. 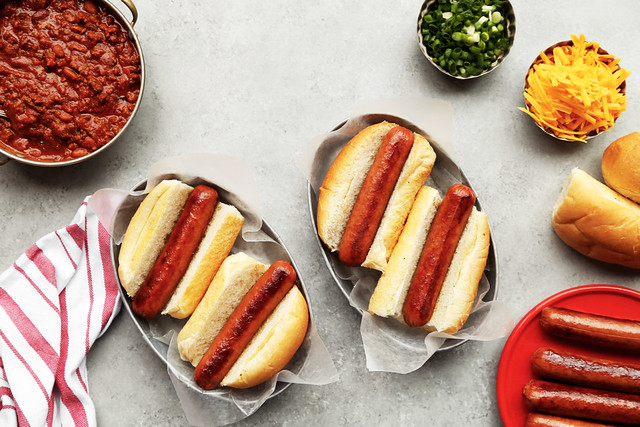 Top the hot dogs with copious amounts of our homemade chili. Don’t be shy, and just pile it on. As you’ll notice, there is a lot of chili which is perfect for leftovers! You can thank me later for this. Although, you might realize this is the perfect recipe for a party, so you might not have leftovers. 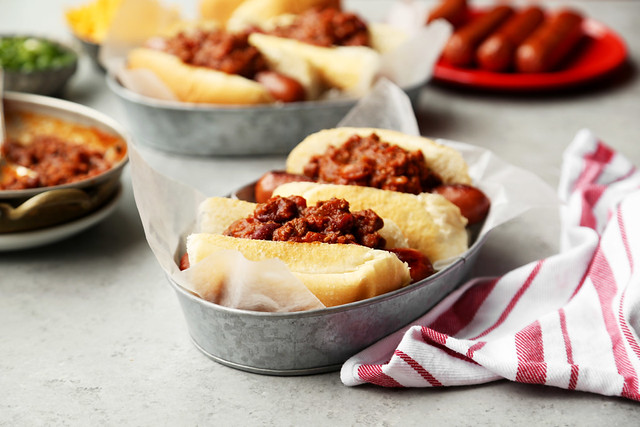 But if you do have leftovers, here’s a good tip on how I store them and save for later!

**Tip: I like to portion it out into sandwich bags (or plastic containers) and pop them in the freezer. Then when I feel like having chili, I just thaw it out in the fridge the night before and go crazy the next day. It’s perfect.** 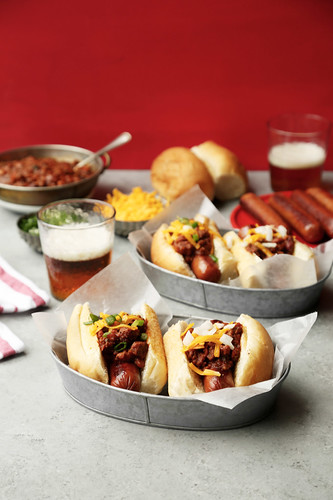 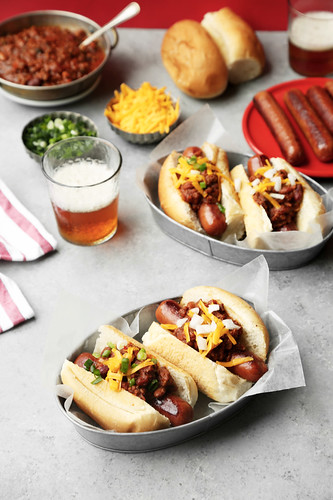 If you don’t have time to whip up this chili, but still really want to be able to devour it all, I got you covered. Skip all of the steps and just throw all the ingredients into a slow-cooker. Try to breakdown the meat as best you can. Turn it on low (or high if you need it faster) and then sit back and relax or go do things you have to do because you’re a busy person. I understand. 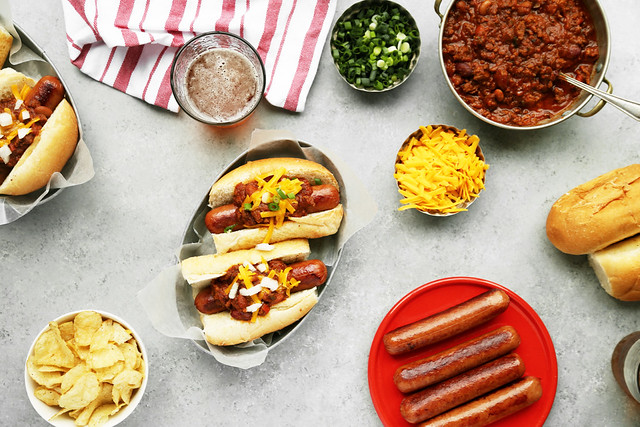 You might not be a hot dog person. I get that. I grew up with one sister who hates, more like loathes, hot dogs. It was better for me because I got to eat hers. And now I live with a guy who loathes, more like hates, hot dogs. Go figure. It’s better for me though because I get to eat his portion. The point of this tangent is that you can skip the hot dogs and serve the chili on something else. I won’t be angry. 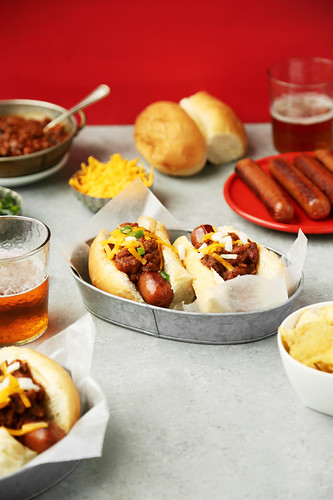 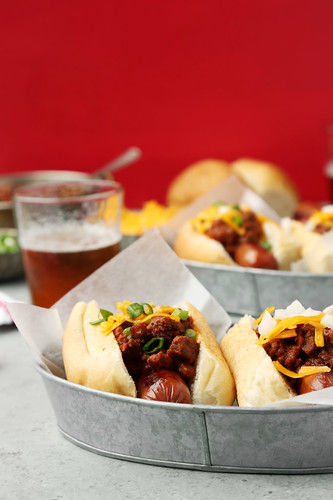 You might think that making homemade chili is worth the two hours of simmering away on the stove, but I guarantee you that it’s well worth the effort. Not to mention that canned chili smells like dog food. You don’t want to eat dog food. You want to eat the best chili in the world. Just a few simple steps and a handful of ingredients, you’ll be putting chili on top of everything. Everything. 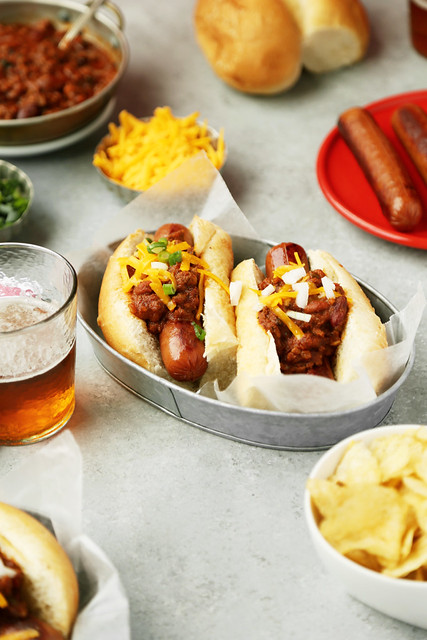 Don’t forget to tag your Candid Appetite classic recipes with #TCAclassics on facebook, twitter, or more importantly, instagram. I want to see all of your photos! And if you think that I don’t look at them, well you’re wrong, that’s all I look at. So you might as well tag me in them so that I don’t have to stalk you in some creepy way. Then it’s no fun for anyone. Also, it’s great when we’re all a part of a hashtag. Let’s make it a thing. A big thing. I just really want you to make some chili and pile it on top of hot dogs with some cheese. Does that make me a bad guy? If that’s wrong, then I don’t want to be right. Enjoy! 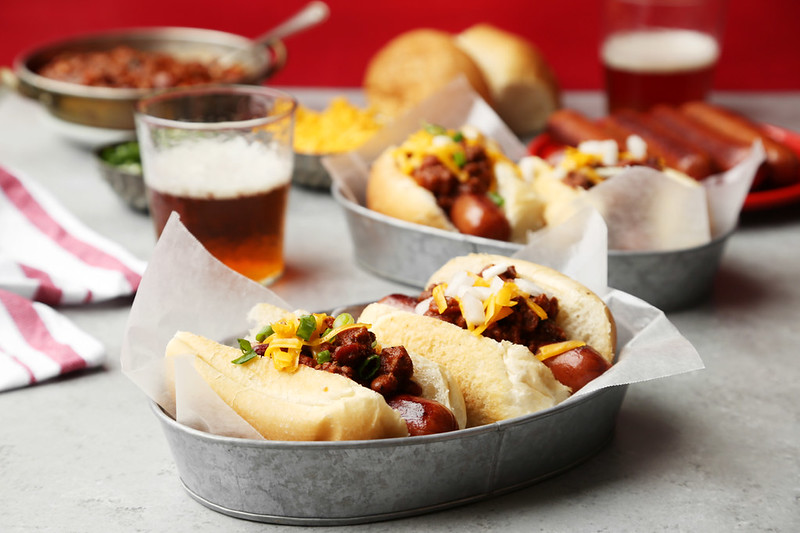 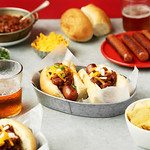