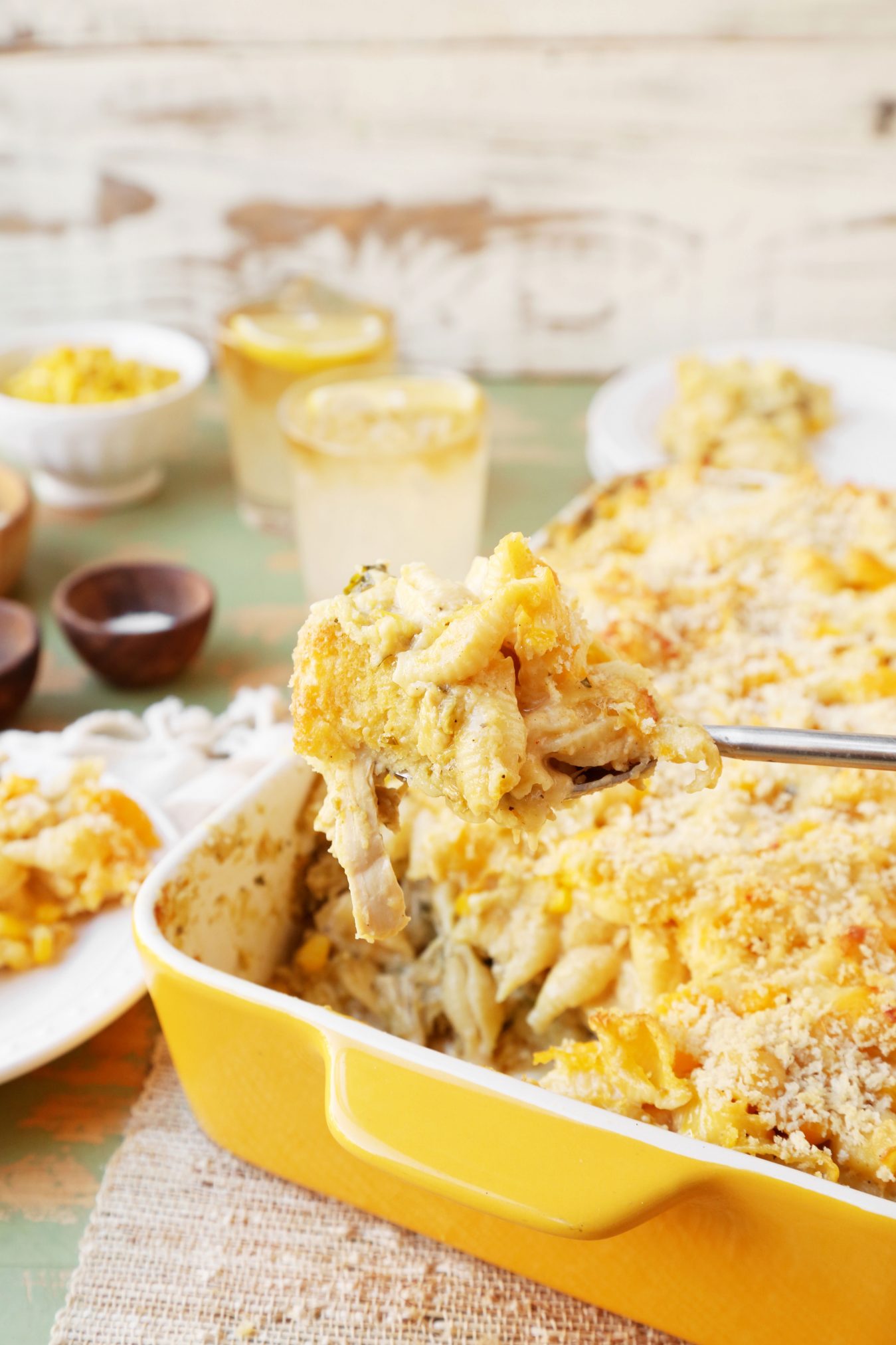 I’m a big fan of tamales, my favorite being the green chili chicken variety, and I’m also a really big fan of mac and cheese (don’t even get me started on that front). So this Tamale Mac and Cheese is the best of both worlds. Two of my favorite dishes colliding into one mega casserole because that’s what this blog is all about. Taking two recipes and mashing them together in unexpected ways. I wanted to create a new and exciting mac and cheese recipe for the site, and so I asked Julian what he thought I should make. So he out of the blue without missing a blue was like, “a tamale mac and cheese would be awesome!” Then we both sort of brainstormed this green chili chicken tamale mac and cheese. This dish features a bottom layer of masa, then a layer of green chili chicken sauce and then of course topped with a mountain of homemade mac and cheese, and a layer of crispy bread crumbs and more cheese. Then it’s baked until bubbly and I kid you not, it tastes JUST LIKE a green chili chicken tamale. It’s crazy and cozy and comforting and calling out your name. It might by slightly over the top but sometimes you deserve to treat yourself with a melty cheesy pasta-filled dish, especially during this time of year. It’s great for potlucks or family gatherings. So keep it up your sleeve until you’re ready to have your life changed or when you’re in need of an out-of-this-world recipe that will impress everyone. 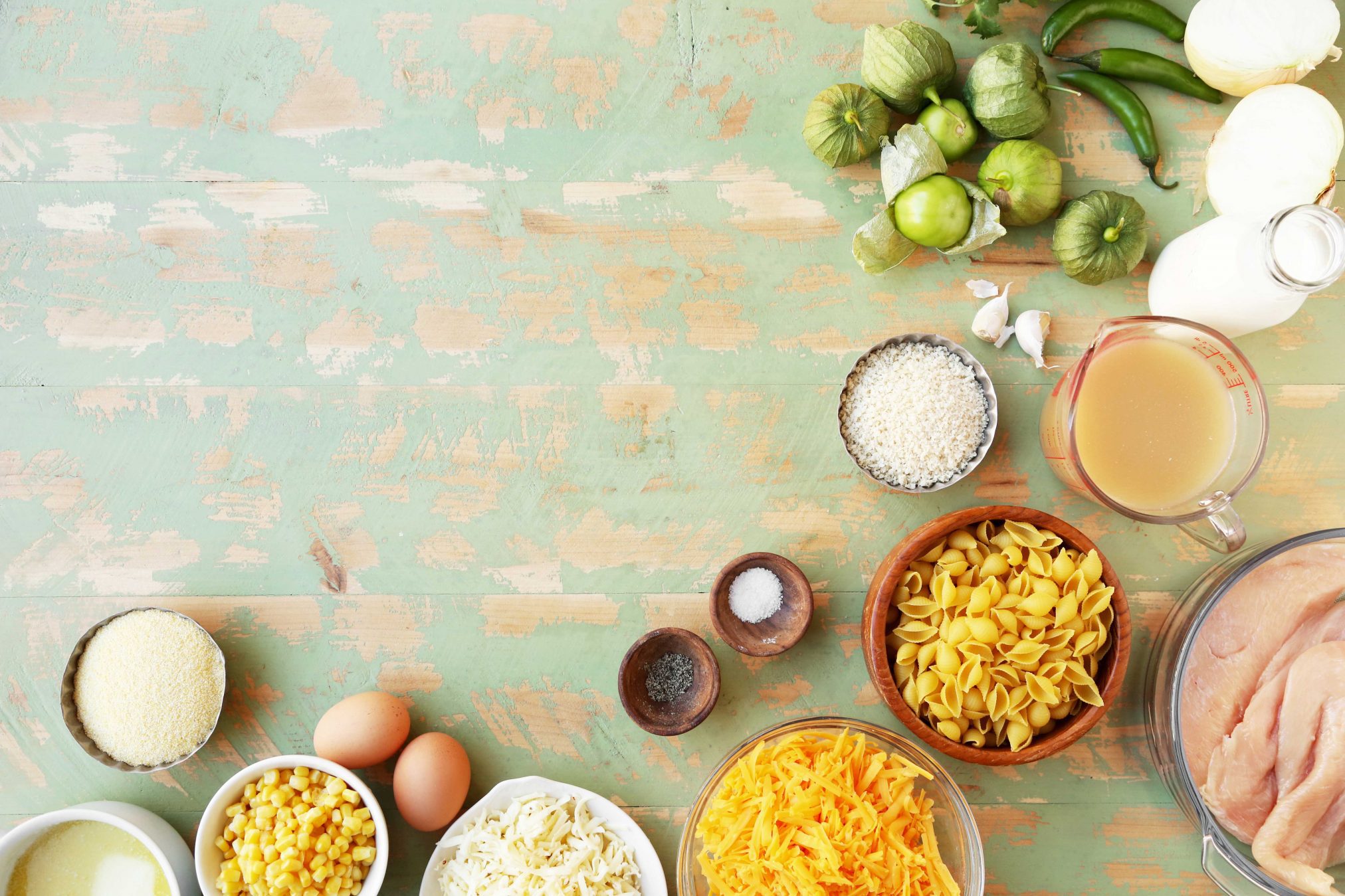 Before we start, I have to tell you that there are a few steps to this casserole. This isn’t something you make during the week when you’re tired from work or have had a long day. This is a special occasion, super filling, super impressive type of casserole that you make when you want to woo people over. The first thing to do is roast the tomatillos, chilies and onion. 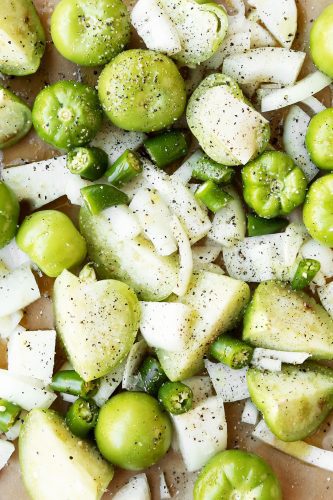 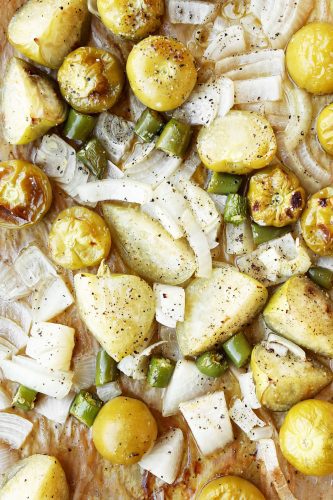 Once cooled, transfer to a blender, along with chicken stock, garlic and cilantro and blend until smooth. 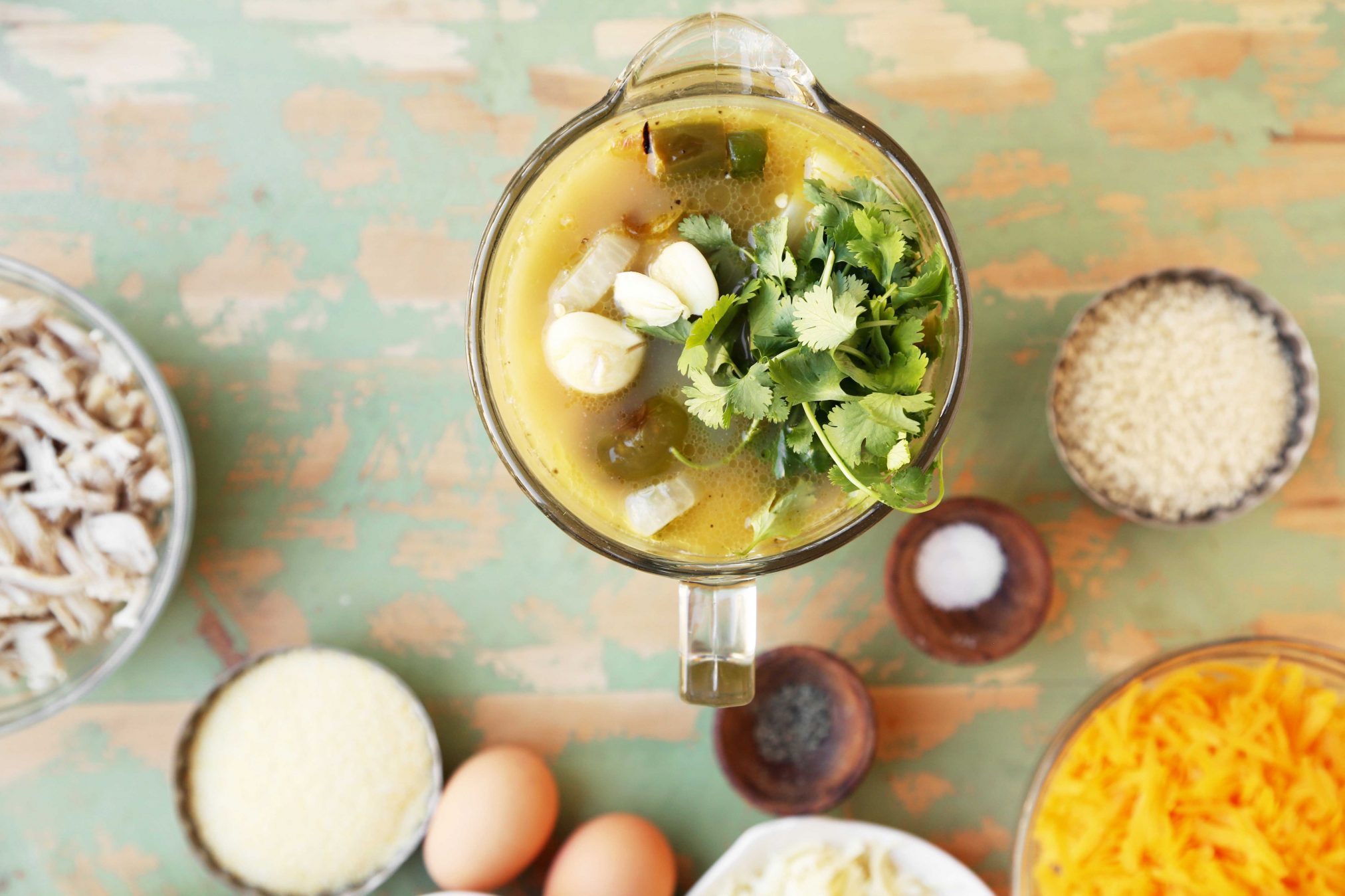 Place a large pot over medium-high heat, along with a few tablespoons of canola oil. Once hot, pour in the blended sauce and cook until thick and reduced by more than half, about 1 hour over low heat.

**Note: Make sure to keep stirring every so often so that the sauce doesn’t stick and burn to the bottom of the pot.** 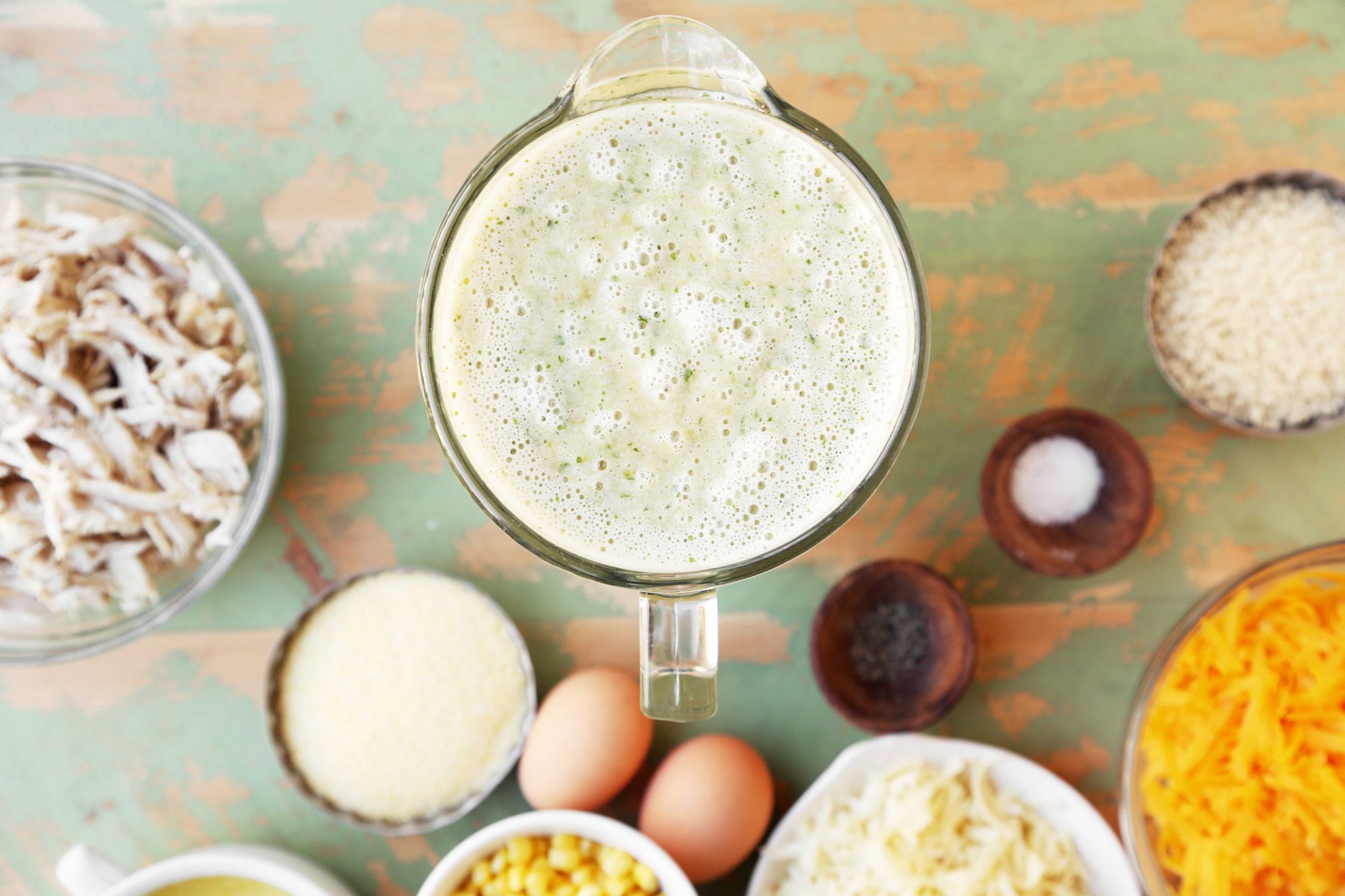 So while that is going, let’s turn our attention to the bottom layer of this casserole. It wouldn’t be a tamale mac and cheese without the masa layer of the casserole. In a large bowl, whisk together the cornmeal, masa harina, flour, baking powder, baking soda, salt, eggs, butter, and buttermilk until smooth.

**Note: Masa harina is prepared corn flour that you can find in almost any grocery store nowadays in the flour or hispanic foods aisle. Most times it’s in the flour aisle called Maseca!** 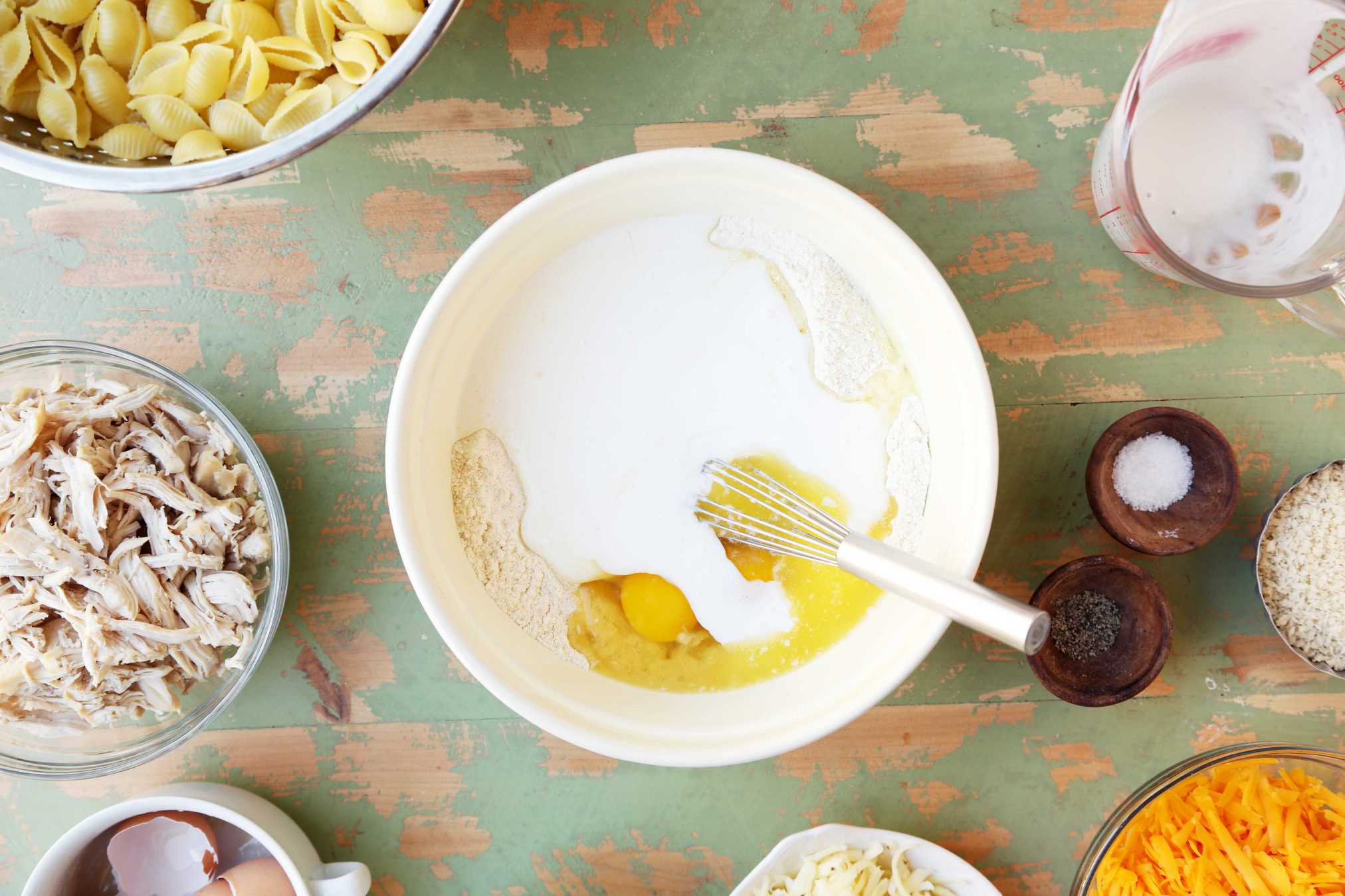 Pour the batter out into a prepared 8 or 9-quart rectangle baking dish, spreading it out into an even layer. Set aside. 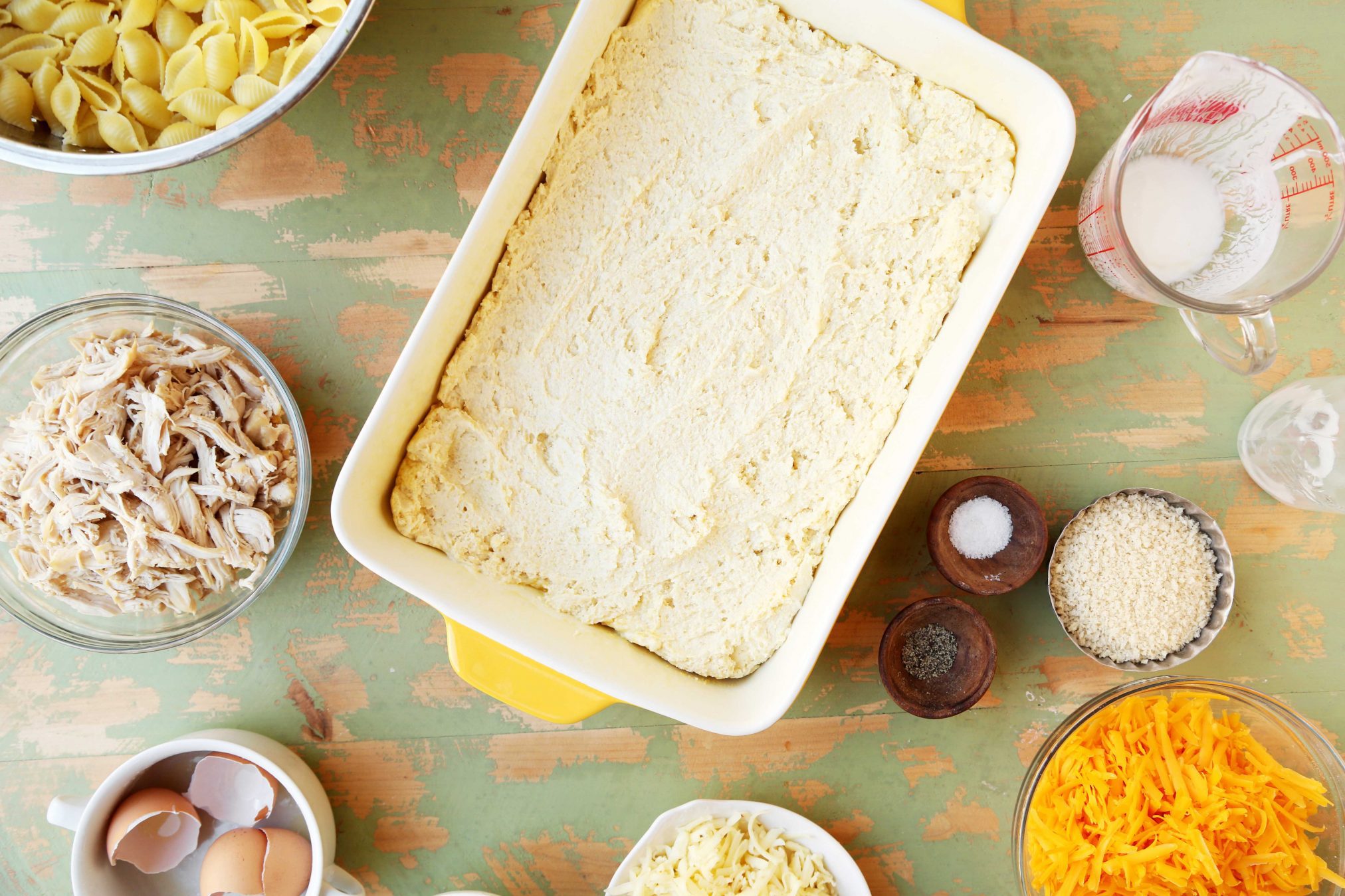 Once the sauce has thickened and reduced, stir in the shredded chicken and some more cilantro. Give it a taste and adjust seasonings accordingly, adding more salt or pepper as needed.

**Tip: You can use store-bought rotisserie chicken for this recipe, just shred it and stir it in. Or if you want you can buy boneless skinless chicken breasts, boil them in water or chicken stock until cooked through and then shred.** 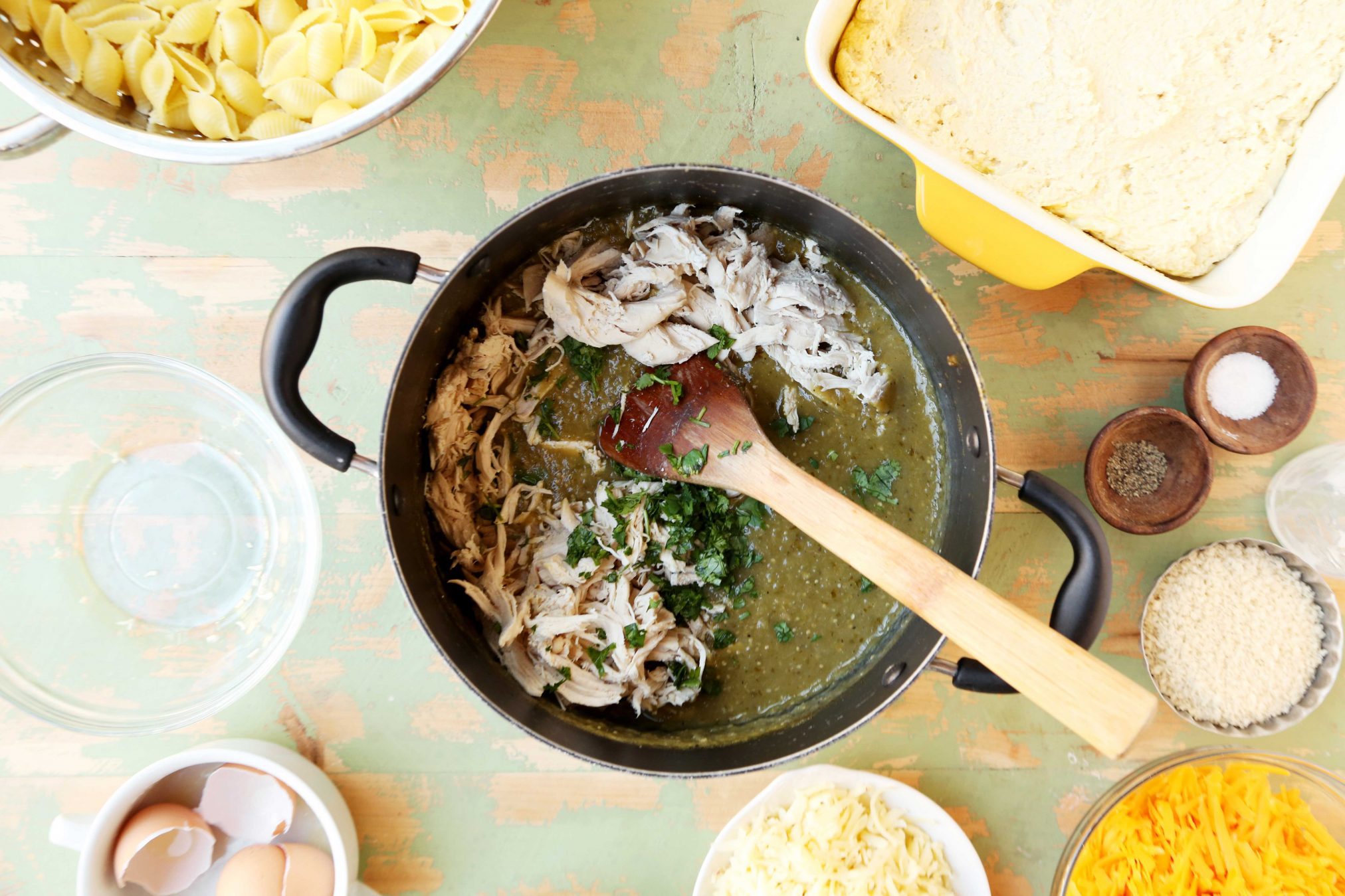 Pour the green chicken chili sauce over the masa layer and spread it out into an even layer. Then let’s make the cheese sauce for the mac and cheese. Set a medium saucepan over medium-high heat with butter. Once melted, whisk in the flour and cook for about 30 seconds. Slowly whisk in the milk and cook until thickened, about 10 minutes. Season with salt, pepper and chili powder. Remove from heat and stir in the cheeses until melted and smooth. 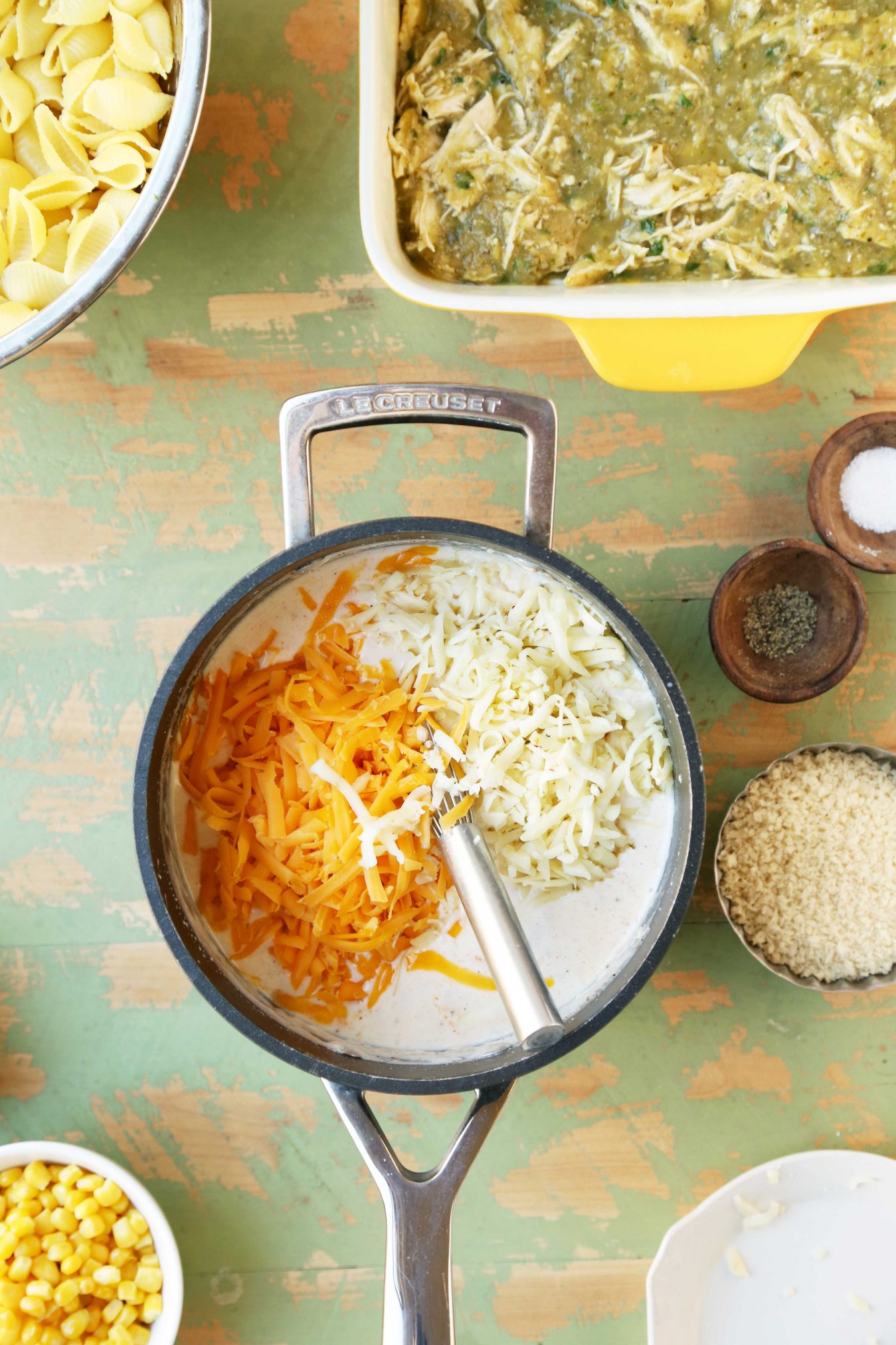 Toss together the cooked pasta with the cheese sauce until well combined. Just cook the pasta according to the package directions, about al dente, so that it doesn’t get too mushy when it continues to cook in the oven. 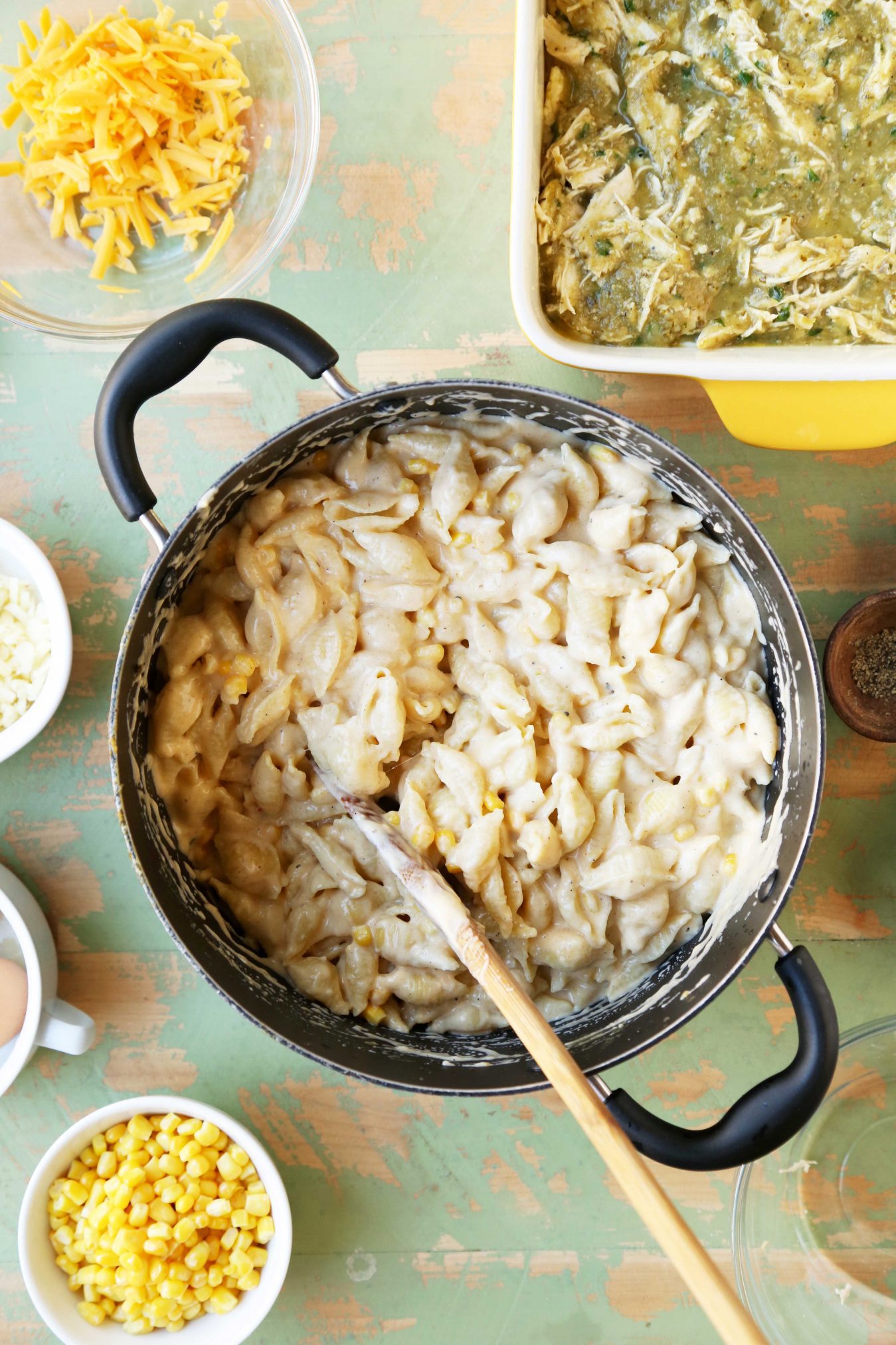 Spoon the mac and cheese over the green chicken chili sauce layer, making sure to really pack it in. Don’t be afraid. 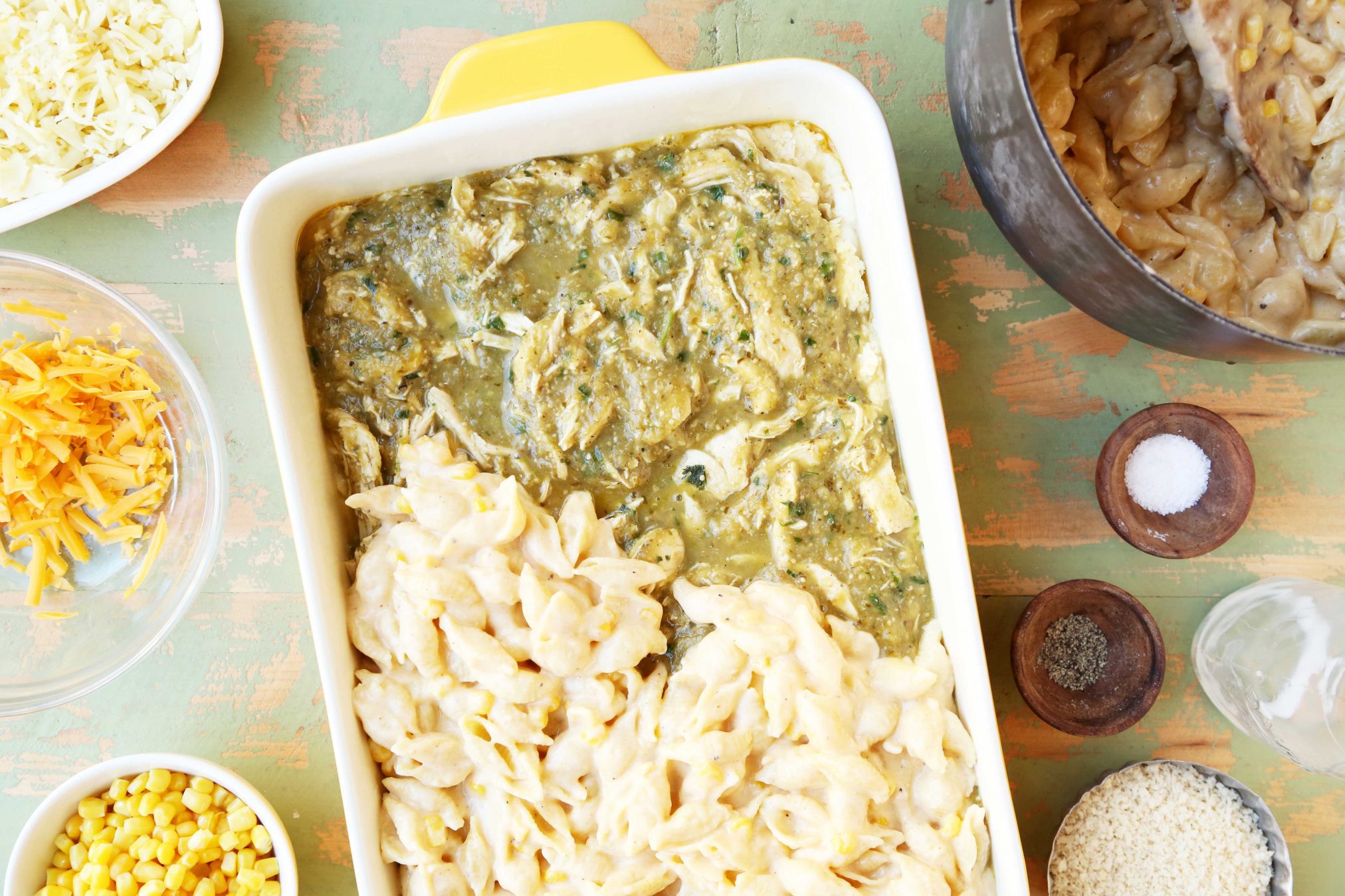 Top the mac and cheese with panko bread crumbs and some more shredded cheddar and pepper jack cheese. This will make a super crispy and crunchy crust on top. 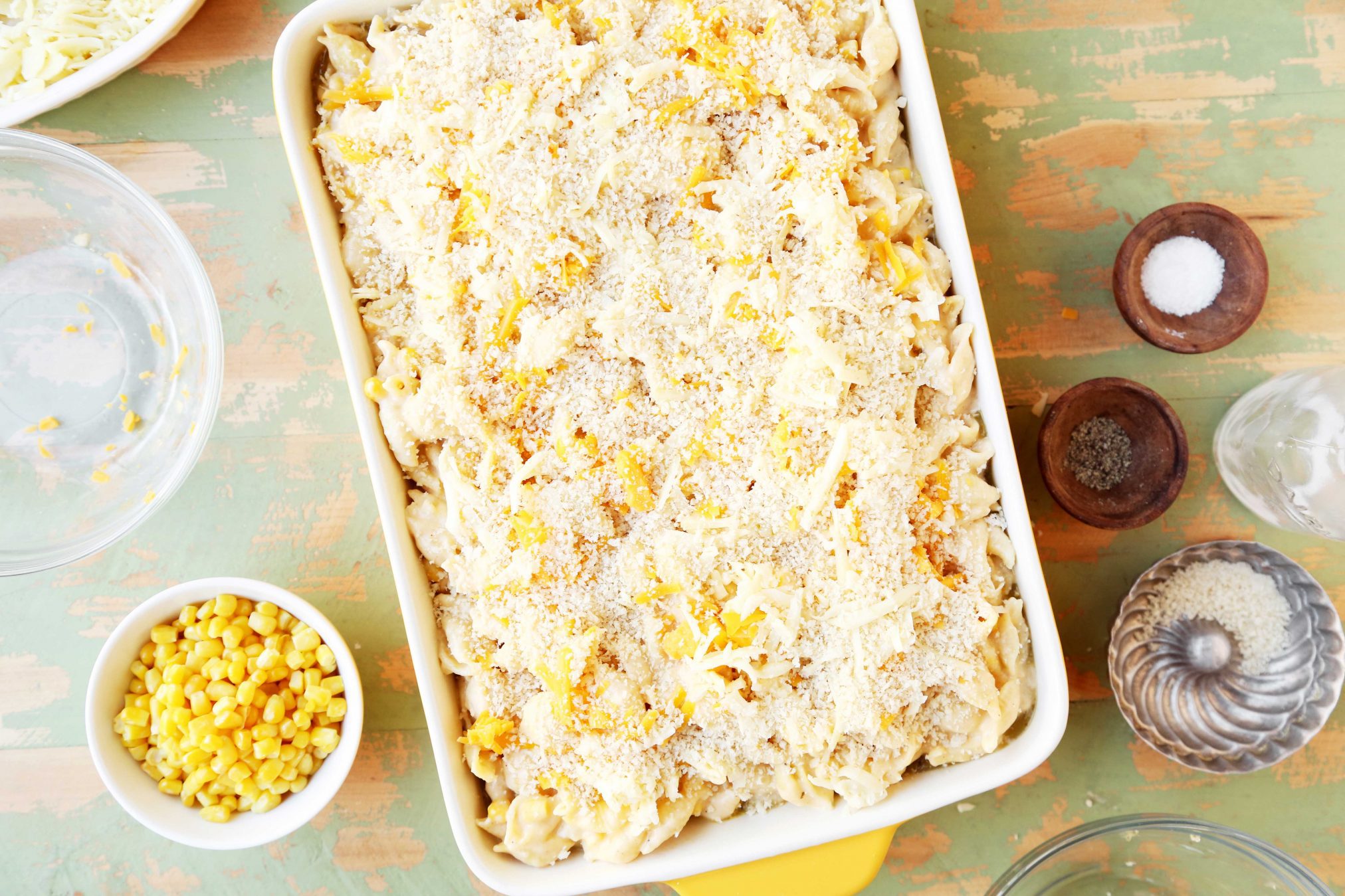 Bake in a preheated 350 degree oven until bubbly and golden brown on top, about 25 to 30 minutes. 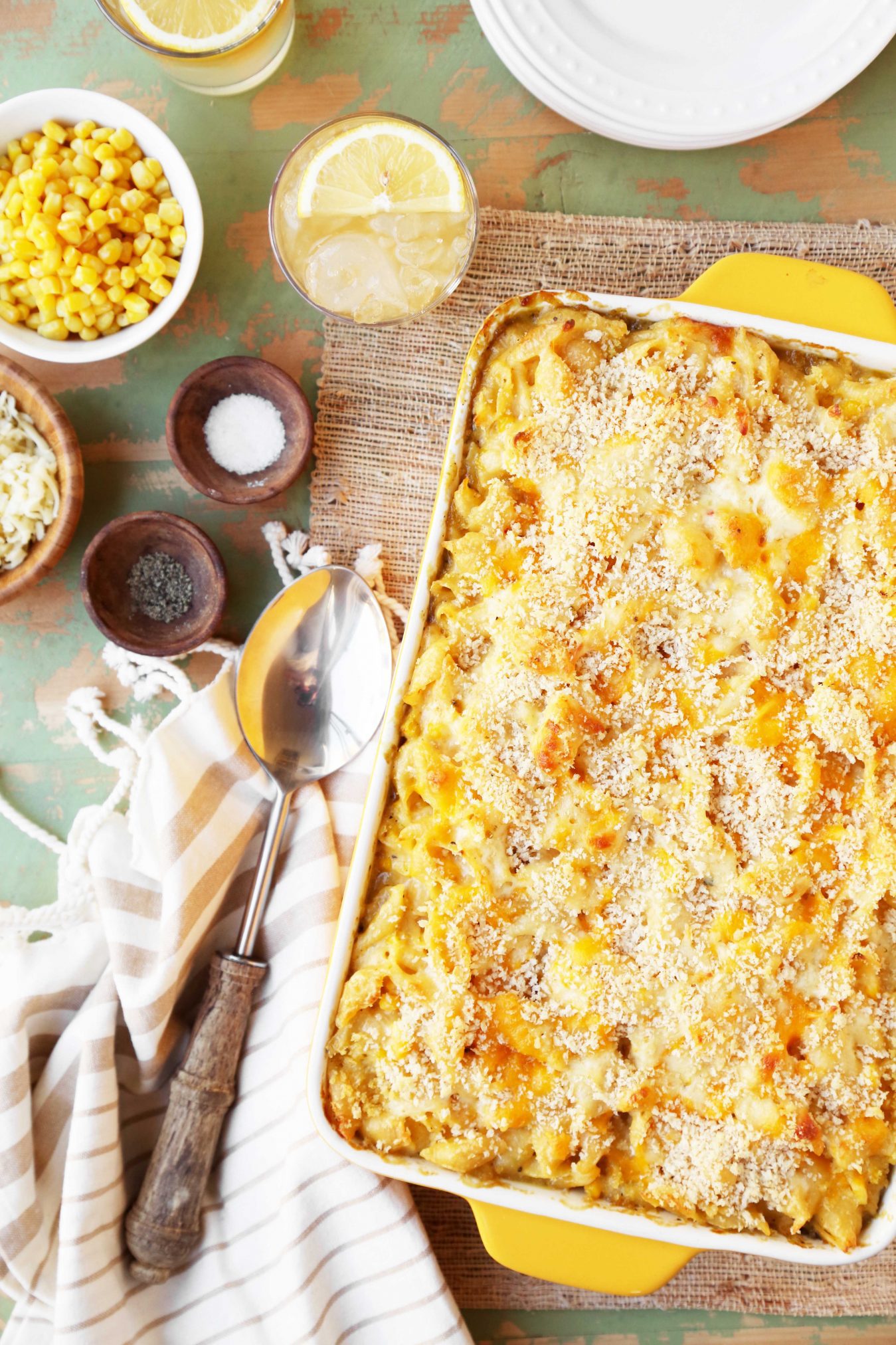 If you want to make this ahead of time, you can top the mac and cheese with the bread crumbs and shredded cheese, and wrap it with plastic wrap or foil unbaked and keep it in the fridge. Then once you’re ready to bake, you can cook it in a preheated 350 degree oven for about 30 to 35 minutes. 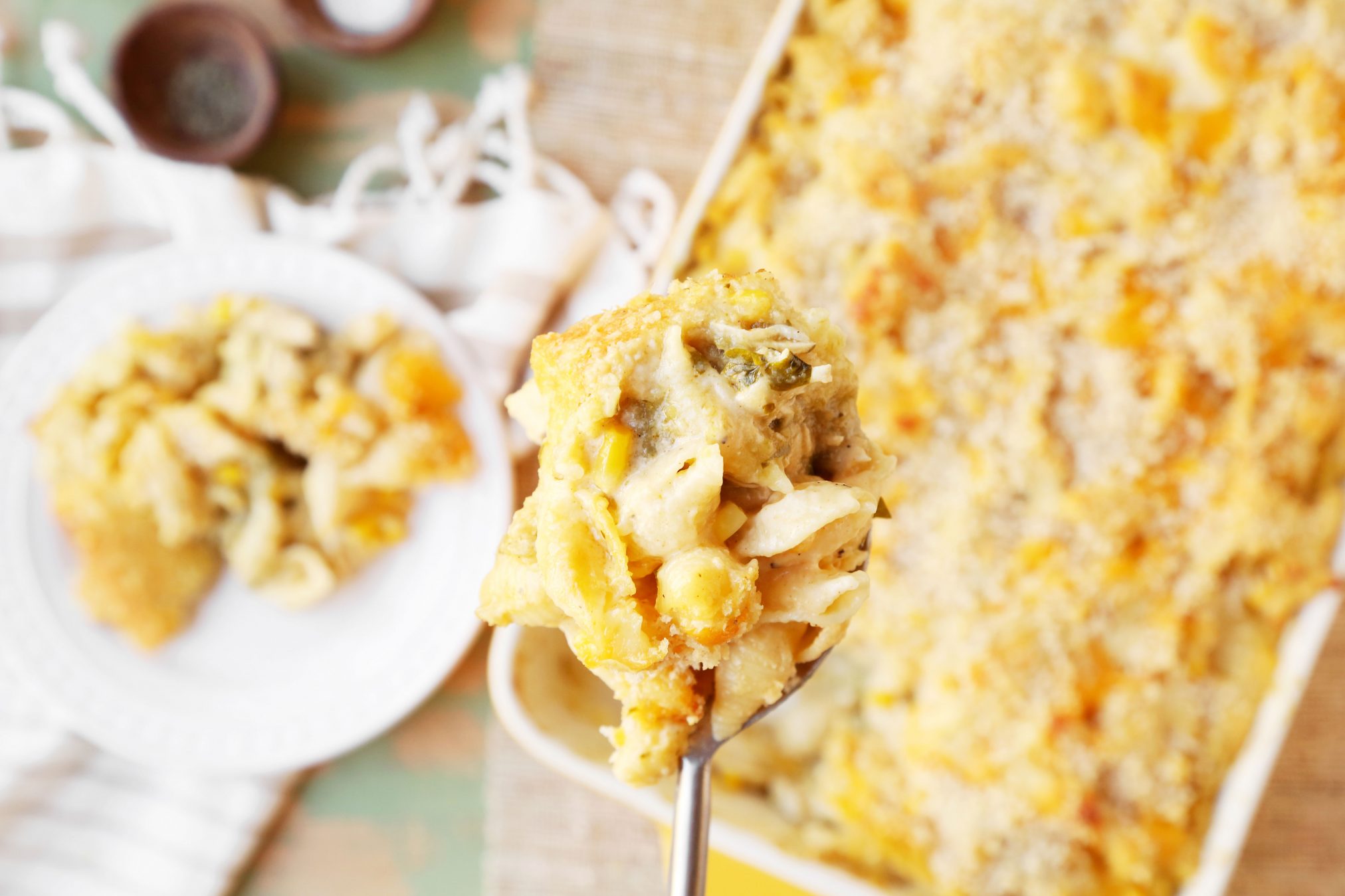 This is a very filling mac and cheese casserole, so it’s great on it’s own, but if you want a full and complete meal, try serving it with a healthy salad. It’ll make you feel better about eating multiple servings of this tamale mac and cheese. 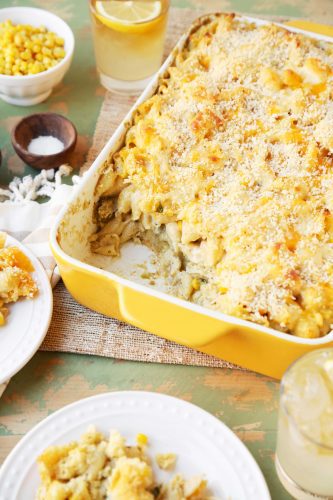 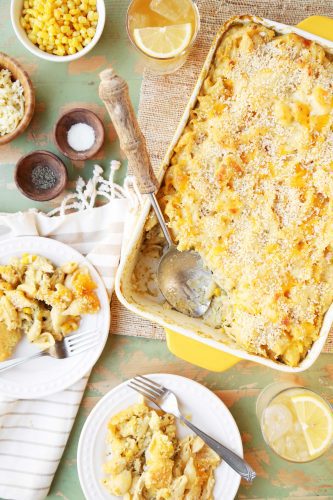 If you want to keep this vegetarian, you can easily omit the chicken. You won’t be missing out on any of the flavor because all of that lives in that homemade green chili sauce. 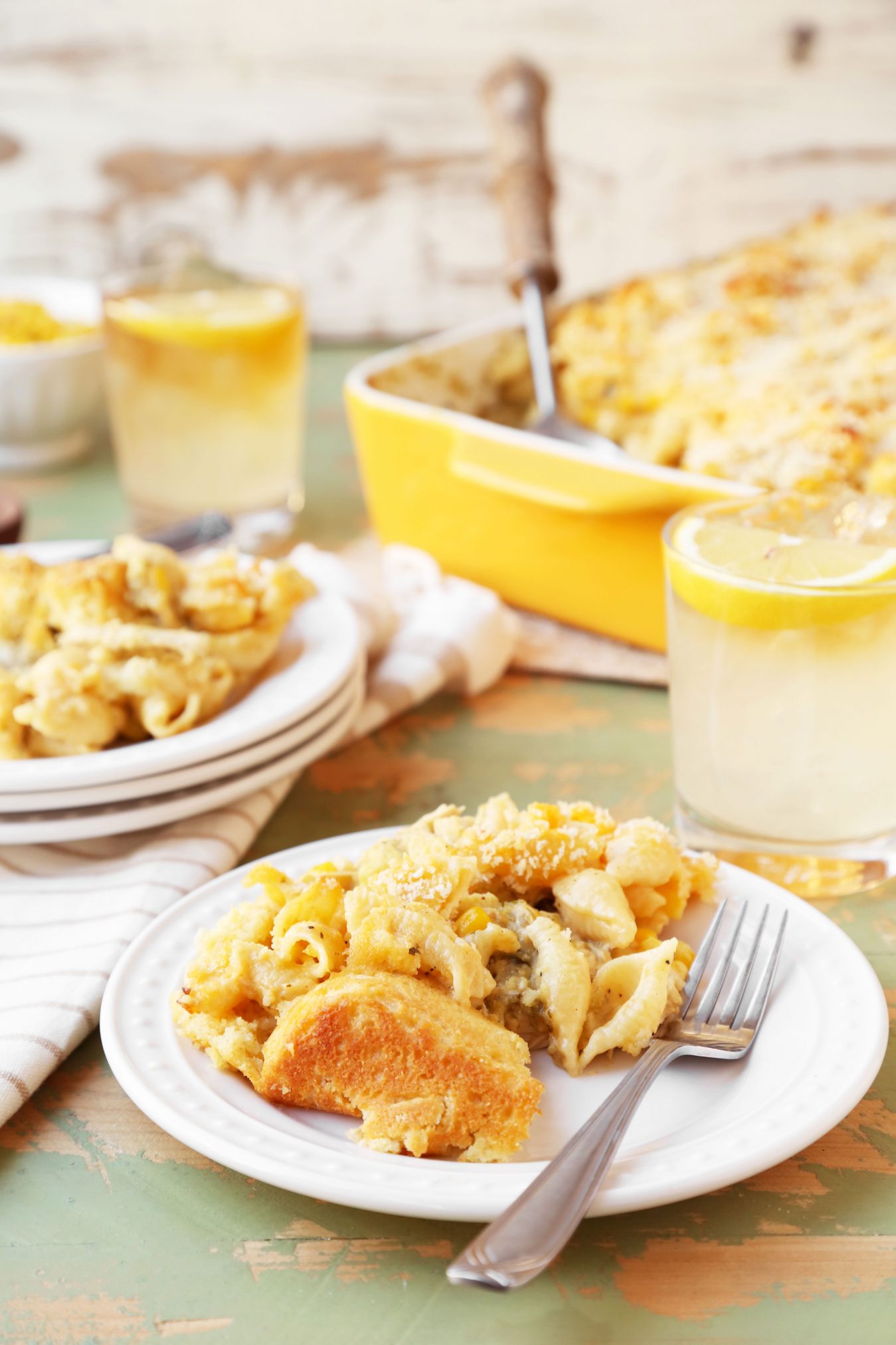 If you’re a fan of tamales, just as much as I am, and a big fan of mac and cheese, then you most definitely have to give this recipe a try. It’s the best of both worlds, even with a tamale pie kind of vibe to it! Give it a go and make sure to let me know what you think! 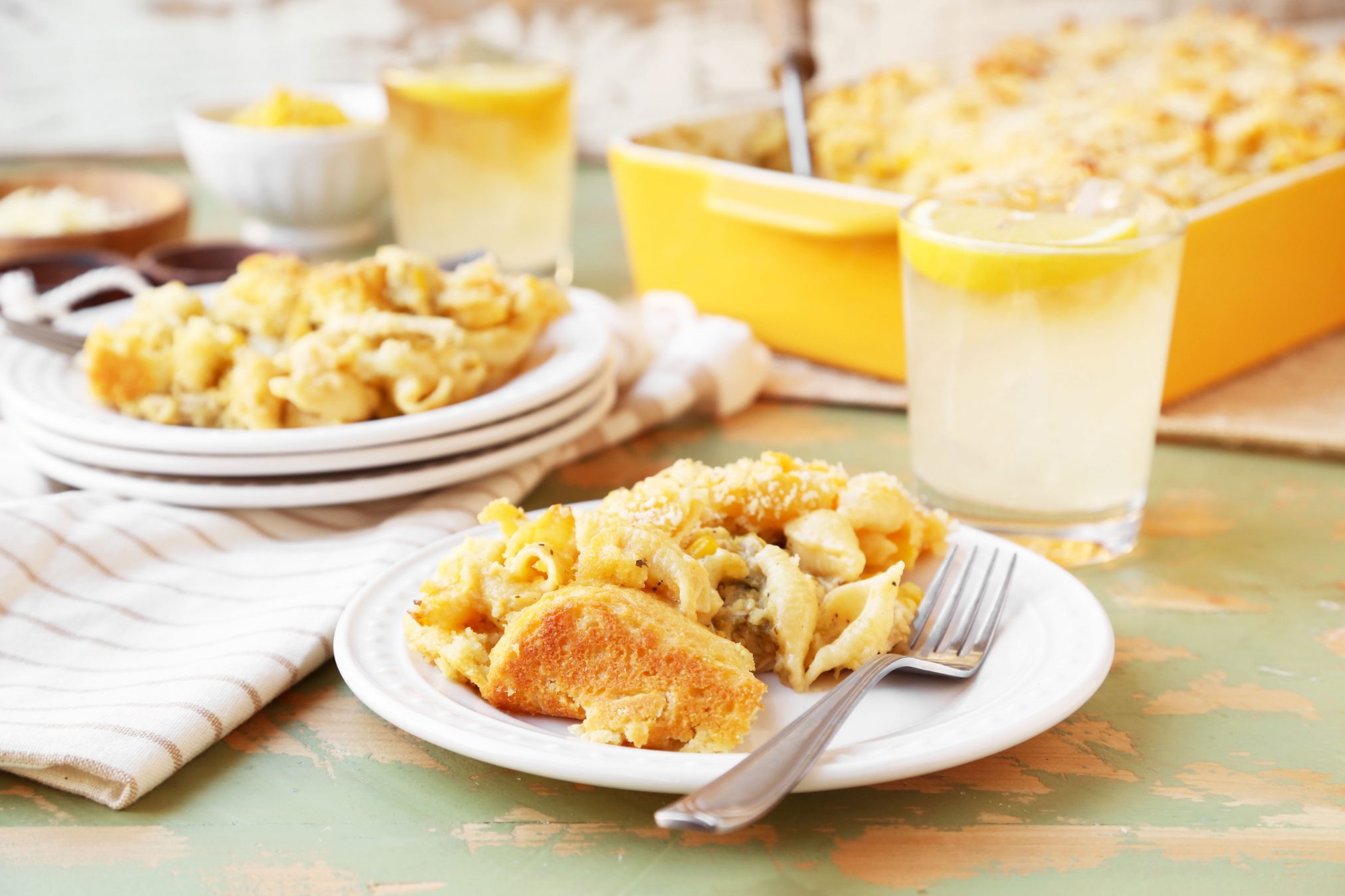