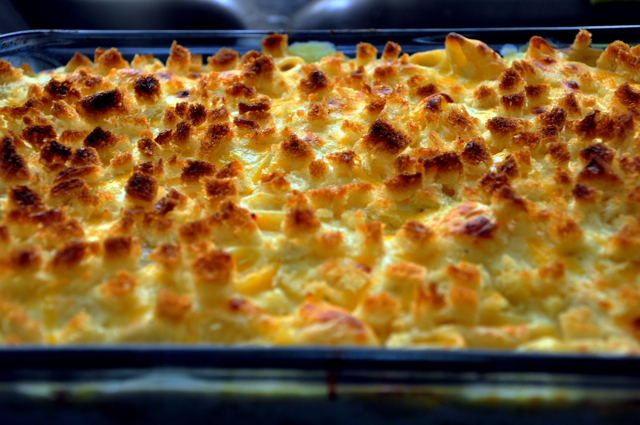 I don’t think this post needs much of an introduction. I’m sure that after the title and the first picture, most of you wont even be paying attention to my babble anymore. Cheese, Cheese, More Cheese, Pasta, Milk, Bread….it’s like I just died and gone to heaven. Mac and Cheese, the epitome of all childhood classics. The mother of all comfort food. Bubbly cheesy goodness all tossed with pasta, topped with bread and more cheese, baked until golden brown and crusty. Let’s all jump around the flavor train to Carbsville. The crust. The crust. The crust. I’m repeating myself to add emphasis and verbal infliction onto the best part of this dish. You know what? Forget the macaroni and cheese, just hand me a giant plate of only the top crunchy part, because that’s all I really care about in the end. That’s the only part that matters to me.

Okay, I know I said it didn’t need an introduction or a little story leading up to the post, but I lied. This post in particular actually does have a story behind it. A friend of mine just moved to her very own apartment for the first time. Just weeks ago she was telling me how excited she is to start cooking because she finally has a kitchen to experiment in. It was the perfect opportunity to plug in my new blog to her, because let’s face it, I’m a giant ham and  should just climb into the oven and roast myself. Any opportunity to pass along my new project, I’ll jump at. Well my friend became really excited about it and since then has been a great follower and feedback giver. Yup, I just said feedback giver. Not long after that she asked me if I could feature a recipe that she has been wanting to try.

Well, Sam, your wish is my command. Here is the recipe you requested, easy to follow and very delicious. I might have been doing you a favor, but in reality you did me one! Because this was an amazing recipe. I’m glad you came across it. I hope I did Martha Stewart Justice, I do have to say though, that I made some minor changes, just because I’m stubborn in my ways and thought it could be better. What do I know though right? Hope this helps you.