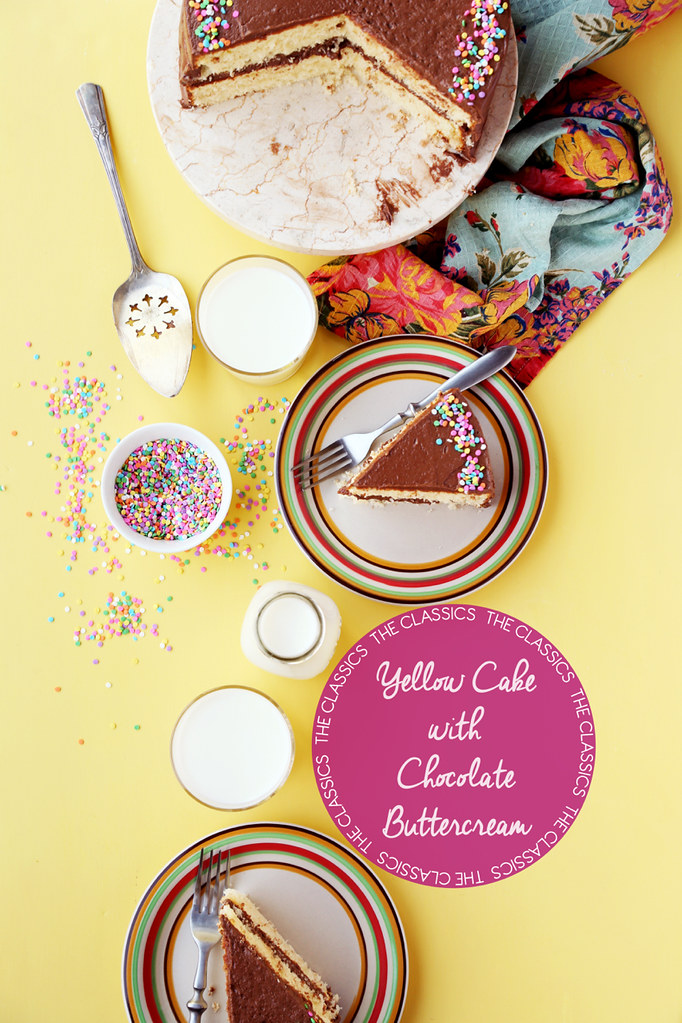 I had an undying love for boxed yellow cake mix when I was a kid. I’m sure I wasn’t the only one out there with the same love affair. If I’m being perfectly honest I still have a soft spot for it (shh, don’t tell anyone). I have been known to buy a box, make it and eat it all in one evening. What can I say? Some days are harder than others, and the only medicine is to make cake from a mix. Let’s not talk about it. It has been a while though, so I think that should allow me a bit of forgiveness. When I was younger, I actually made boxed cake all the time and sometimes, more like all the time, I’d act like I had my own cooking show. I’d go through the making of my boxed cake as if I was talking to an audience that wasn’t there, through an invisible camera. “And now we add 1 cup water, 1/3 cup oil and 3 large eggs to our mix and stir it until combined.” It was all pretty legit. Why anyone would want to watch a cooking show where someone was making cake from a box mix, was beyond me. I didn’t even think about that as a kid. I just had the most popular cooking show in my imagination, and everyone wanted to watch it. Humble brag.

Those days are long gone, and although I sometimes crave a boxed cake mix every now and then, I do actually more often than not, just make my own version at home, from scratch without all of the guilt. Although, I still want to eat the entire thing in one sitting so I guess not much as changed in that respect. Who doesn’t like a classic recipe though? That one go-to “fill in the blank” recipe that you can count on to always come out right. I think this post is the epitome of “The Classics” series, and it’s what I had in mind when I first started it a few months ago. It’s my childhood. It has been a while since I created and posted a TCA Classics recipe so I’ll refresh your memory on the concept and the recipes that have gone before.

We kicked things off with The Classics: Buttermilk Fried Chicken, where I introduced to you the idea of simpler posts with less images of recipes we all know and love. Plus, I shared with you our fancy hashtag (#TCAclassics) so that when you give these recipes a try, you can share and tag them so we can all have a look. We’re always searching for that one classic cookie recipe or classic apple pie recipe, so I wanted The Classics to be just that. The recipes you’re looking for. The recipes you love. Things took a savory turn when the second installment brought us, The Classics: Bacon Cheeseburger. Everyone needs a really great All-American burger recipe. Even if you think you don’t, believe me you do. The third round, The Classics: Cinnamon Rolls was where we learned a very important lesson that cinnamon rolls should always be the size of your head. If they’re not, you’re doing it all wrong. The last classics we had was the mother of all American classic recipes, The Classics: Apple Pie. Here I enticed you with large slices of pie topped with ice cream, and I regret nothing. This time around, The Classics: Yellow Cake with Chocolate Buttercream is bringing you a classic birthday or party cake to entice you and your guests. Not having party or your birthday is still a year away, this makes for the best anytime cake. I just cleaned the house, cake! I took out the trash, cake! I didn’t get a parking ticket, cake CAKE! Bottom line is that cake is the answer to everything.