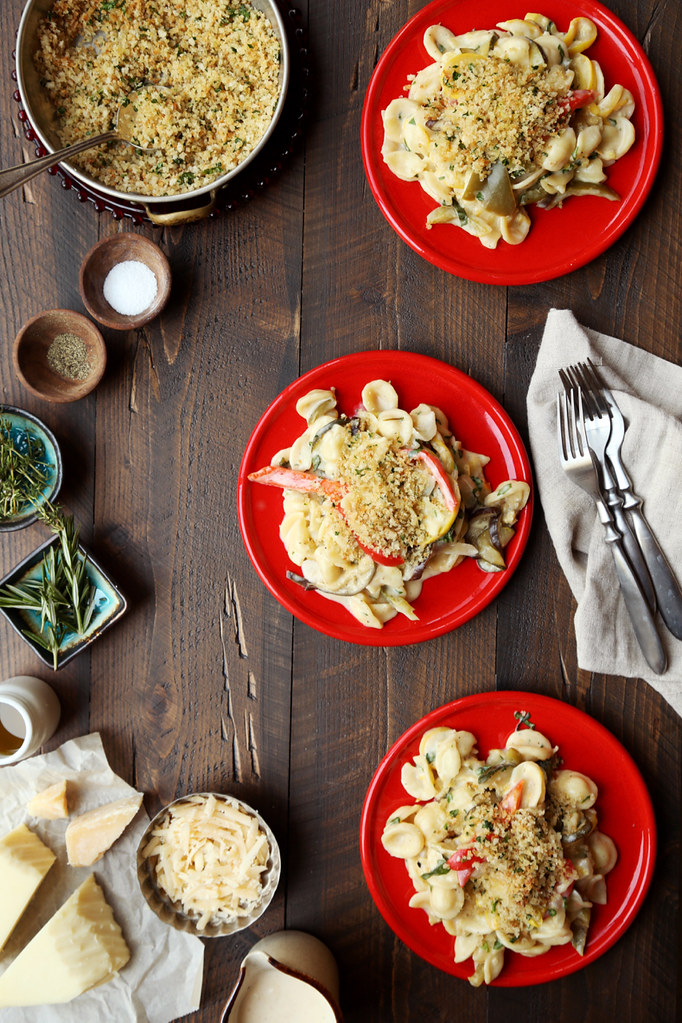 It’s National Mac and Cheese Day today (Tuesday July 14th) and I’m celebrating this momentous occasion the only way I know how, by making a giant pot of the creamiest macaroni and cheese you ever did see. If that isn’t the perfect way to celebrate this beautiful holiday, then I don’t know what is. I couldn’t just give you some boring every day pasta recipe in a cheese sauce though, what kind of person would I be if I did? Don’t answer that. Nothing makes me happier than when two classic recipes come together in a delicious food explosion to make one unbelievable dish. It’s fun and exciting. Such is the case this time around because I’ve gone ahead and thrown ratatouille and mac and cheese together into the same pot. Blasphemous? I’m sure, but I wouldn’t have had it any other way, and I don’t think you should either.

I’ve teamed up with Wisconsin Cheese, once again, to bring you yet another out of this world macaroni and cheese recipe for their All Things Mac and Cheese site. If you’ll recall, earlier in the year, I made an Irish Colcannon Mac and Cheese that taught us a very valuable lesson; cabbage, potatoes and bacon in mac and cheese is always a good idea. Much like with that post, you’ll notice that the recipe won’t be included at the bottom of this page, like it normally is. You’ll have to click on over to their site to get the full recipe! I’m evil, I know, but it’s worth it! (I just want to keep you guys on your toes and make sure you’re paying attention). I’ll include a link at the bottom of the post so you can easily find the recipe and make it at home in honor of your new favorite holiday. Of course, you don’t only have to make it on this day. Do yourself a favor and be sure to make it all summer long because it’s everything you never knew you wanted. You owe it to yourself.

I’ve made and eaten ratatouille only a handful of times here and there, so I’m no expert in the matter. But I am an expert in cheesy sauces tossed around with noodles. I’m a pro at that. I wanted this recipe to be easy enough to whip up in a hurry, but still have all of the sophisticated flavors and tastes that the classic French dish has. It’s the best of both worlds, comfort food meets healthy. Quick side not though, am I the only one that thinks of a rat cooking in Paris, whenever ratatouille is mentioned? I blame Pixar and Disney for that. Although a tiny blue rat in a chef’s apron didn’t make this dish, I can guarantee you that it’ll still knock your socks off. Just blow them clear off your feet. That’s the power of mac and cheese and that’s why it has it’s own national holiday. That’s all I’m saying. 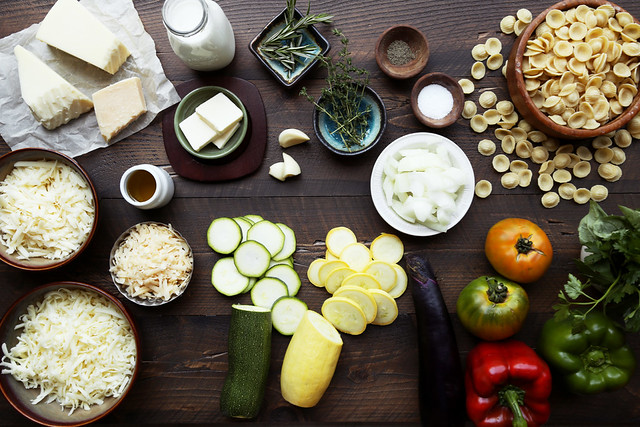 Let’s start by making the ratatouille for our mac and cheese. It’s actually pretty simple to make. Don’t let the fancy name fool you. Melt the butter and olive oil in a large pot, and add the onions and garlic. Cook for a few minutes or until translucent. Then add the thinly sliced zucchini, summer squash, and eggplant. Sauté until softened. 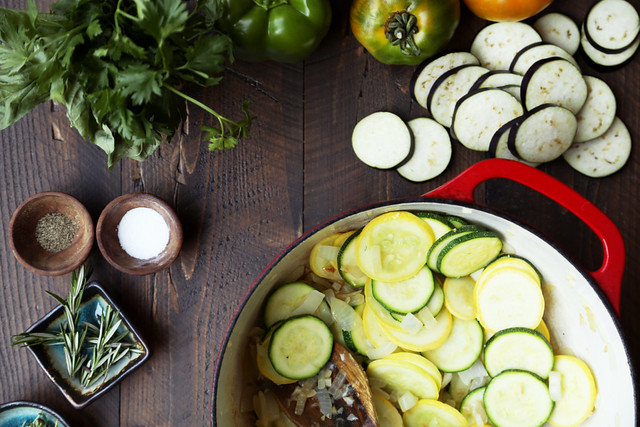 **Tip: I like slicing the veggies into thin rounds, only because I’ve seen some recipes for baked ratatouille, layered in a baking dish. That’s what usually comes to mind when I think of ratatouille. Also, I’m using a Japanese eggplant because it’s similar in size to the zucchini and summer squash.**

Add the bell peppers and heirloom tomatoes. Then season with a bit of salt, pepper, fresh rosemary and thyme. The fresh herbs will enhance the flavors of the veggies, I guarantee it. 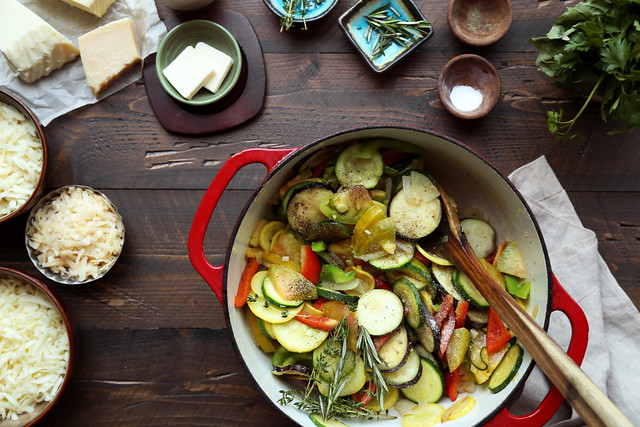 Allow the veggies to cook for a few more minutes to make sure everything is evenly seasoned and cooked through. 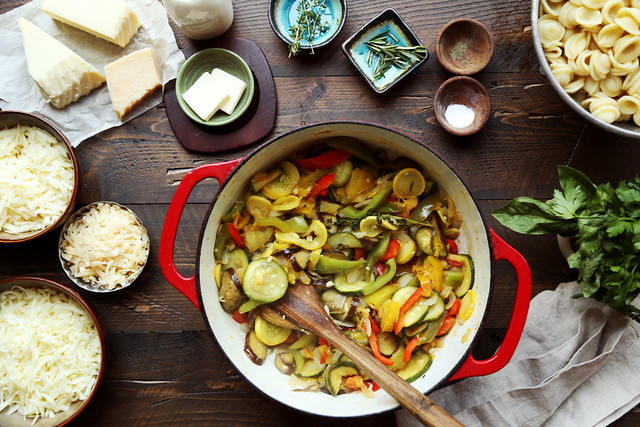 Remove the pot from the heat and set to the side. We’re done with the ratatouille for the moment. So let’s now make the cheese sauce for the mac and cheese. Did I mention that this is a super cheesy cheese sauce? It is! Cheese for days. It’s made with three different cheeses. (We’ll get to that later), for now let’s talk sauce. 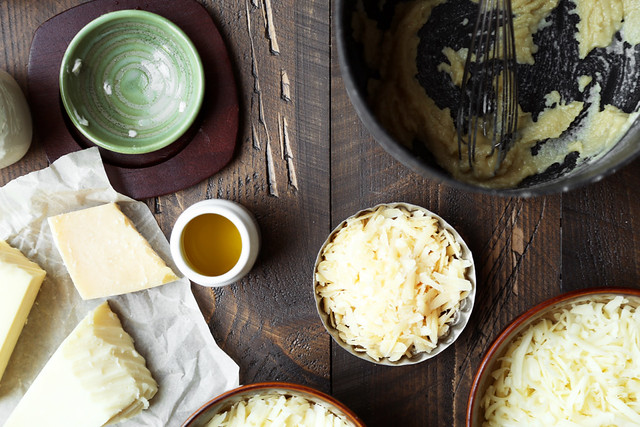 We’re going to start by making a béchamel sauce. Melt the butter in a medium saucepan and then add the flour. Whisk and allow to cook for a few seconds to develop it’s flavor and color. Slowly stream in the milk in a steady stream, all the while whisking continuously. 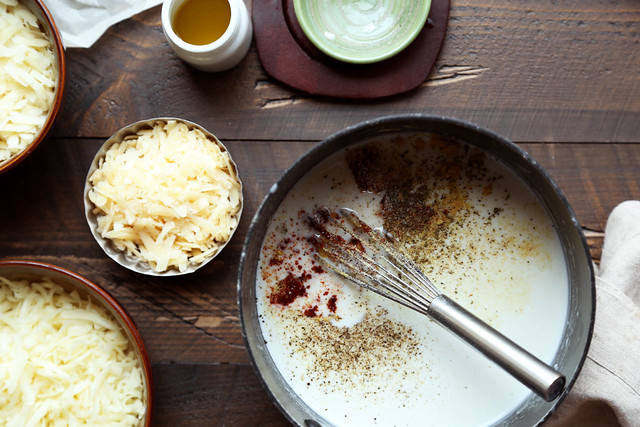 **Tip: You’ll know the sauce is ready and properly thickened when it coats the back of a wooden spoon and you run your finger down the center. If the middle stays divided, it’s ready.** 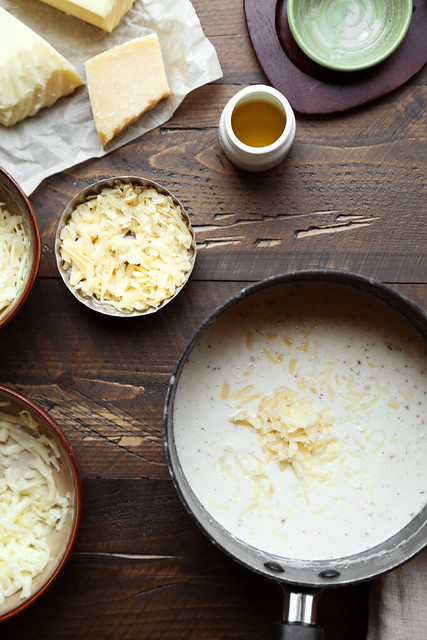 Remove the thickened sauce from the heat and then add in the shredded cheeses. Stir with a wooden spoon until evenly melted and super cheesy. SUPER CHEESY.

**Note: Feel free to use whatever kinds of cheeses you like for this recipe. I’m using three different cheeses made in Wisconsin; asiago, mozzarella and parmesan.**

Remember our ratatouille from earlier?! Well, time to revisit that. Add the cooked noodles to the veggies and give everything a great big toss to evenly combine. 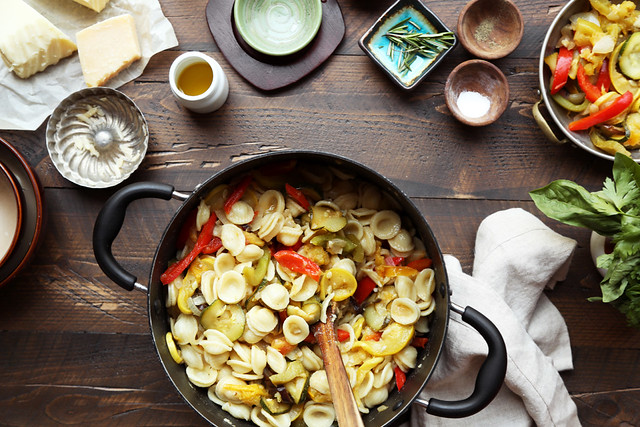 Add the cheese sauce to the veggies and noodles and stir once more. Lower the heat to as low as it’ll go and then allow to cook for a few minutes to heat everything through once more. 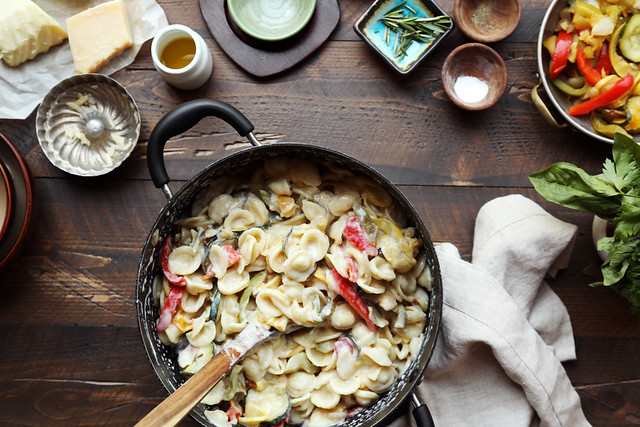 Right before serving, stir in the fresh chopped parsley and basil! Both are pretty traditional when it comes ratatouille, so I like to include them into the recipe, just to keep things as traditional as possible! 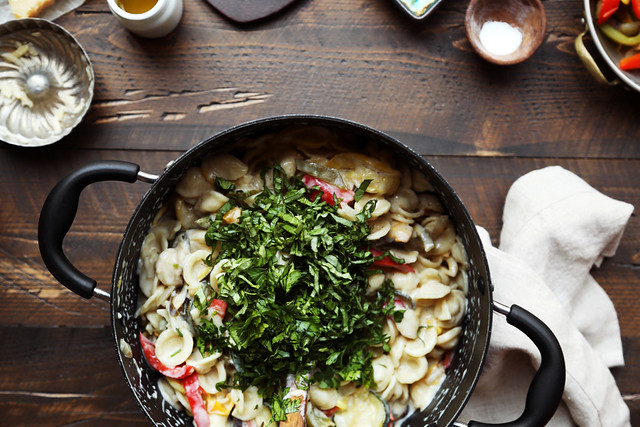 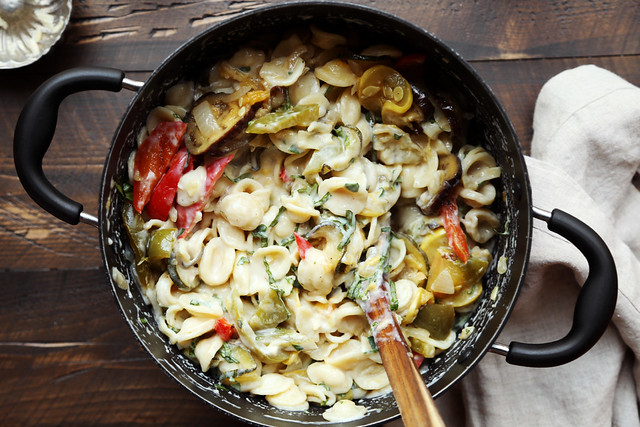 As you know, and as it says in the name of this recipe, this happens to be a stove top mac and cheese. So that means it never gets to see the inside of an oven. With that being said, though, it’s actually great because it’s easier and faster and saves you a few steps along the way. I’m all about saving steps.

The only downside to stovetop mac and cheese, however, is that you don’t get that crunchy topping that everyone knows and loves. I don’t know about you but that’s my favorite part! S0 to help bring back some of that texture, we’re going to whip up a quick herbed breadcrumb topping mixture that we can sprinkle on top later on. 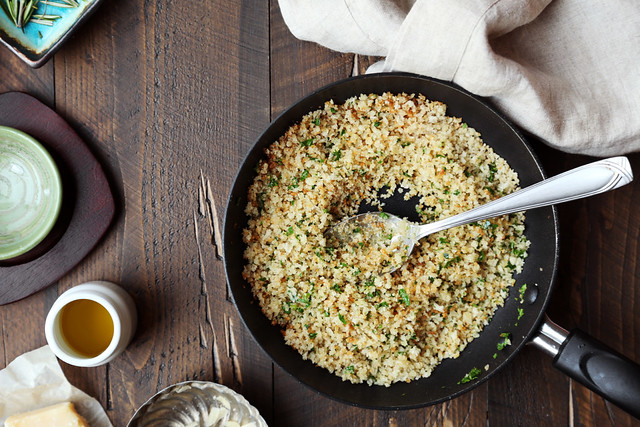 In a small skillet, combine the olive oil, breadcrumbs, and parsley. Allow to cook over medium heat until toasted and light golden brown. Remove from heat and reserve until ready to eat. Serve the mac and cheese with a generous sprinkling of the toasted breadcrumbs on top. 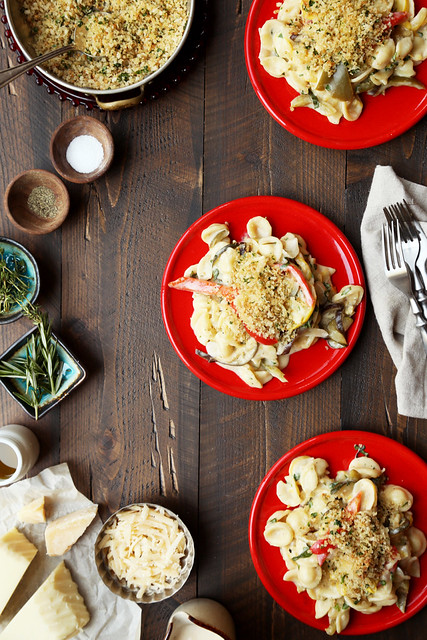 Serve the pasta warm with a simple green salad on the side, if you want to feel like you’re making healthier choices in your life while you eat Mac and Cheese. Makes total sense. You can serve it either hot or at room temperature. Neither is a bad idea, I assure you. You can’t go wrong either way. 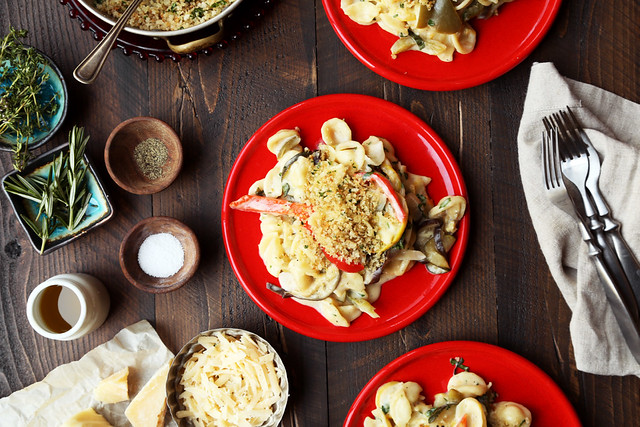 If you’ve been following me on here for a while, by now you’ll know that I’m not one for vegetarian meals. The recipes I do have on here that don’t have any kind of meat, poultry or seafood have been very carefully chosen. I wouldn’t be able to survive without meat. With that being said, however, this recipe really makes me forget about all of that. The different veggies in the dish are definitely hearty enough to fill you up! 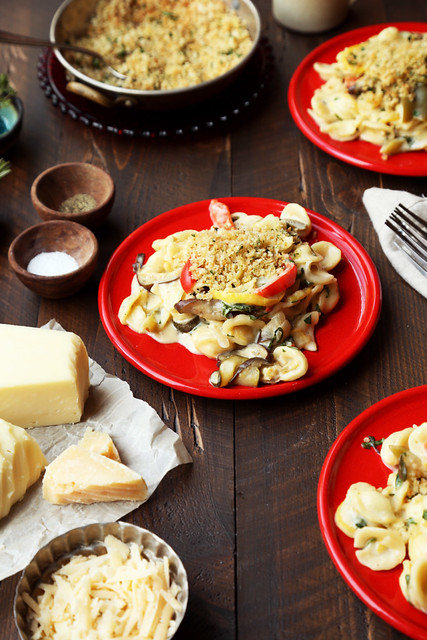 If you really stop to think about it, this is actually quite healthy because it’s loaded with vegetables. Who said mac and cheese isn’t good for you?! They’ve obviously been missing out. I’ve learned that the greatest way to get people to eat things they don’t want to eat (like vegetables for instance) is to disguise them with pasta and cheese. Works like a charm, every time. 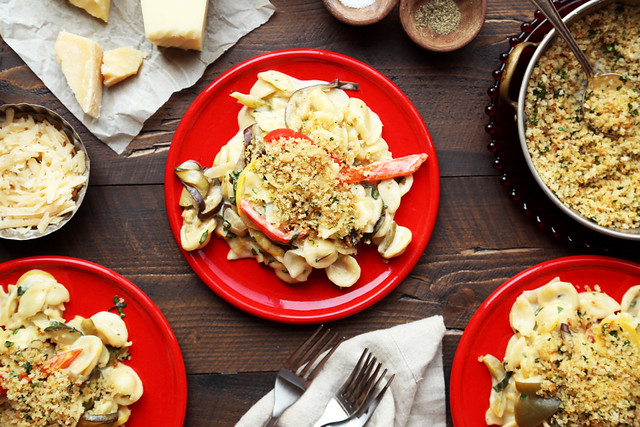 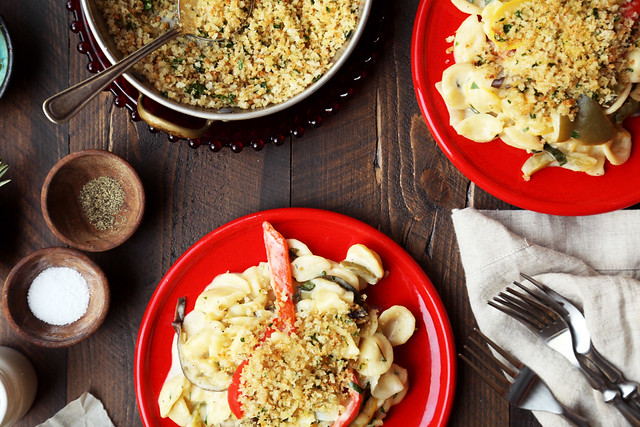 Just in case I didn’t already do a good enough job in convincing you to make this mac and cheese for yourself, I’m here to tempt you even more. Who can resist a super close-up photo of creamy sauce clinging to noodles and veggies? 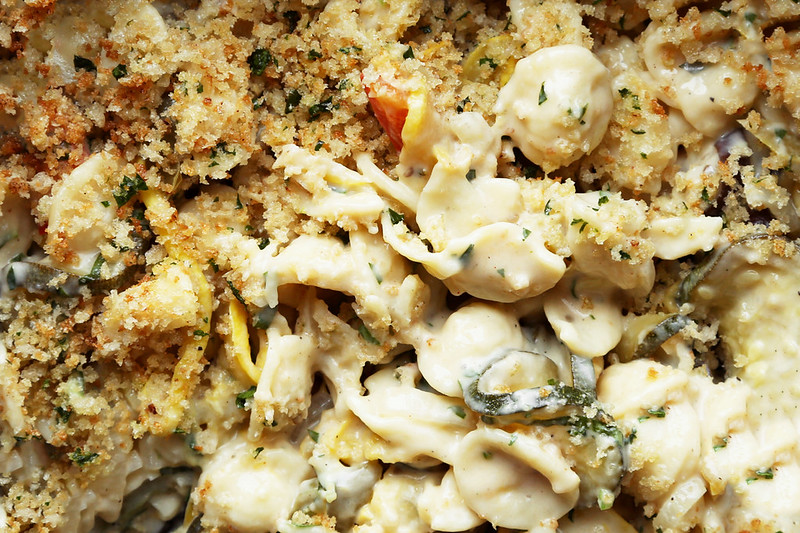 **This post was brought to you by Wisconsin Cheese and although it’s a sponsored post, the ideas and thoughts are all my own. My love for cheese…well, that’s as real as it gets. Thank you for supporting my endeavors on sponsored posts every now and then. They help keep this site up and running, and allows me to continue bringing you recipes on a weekly basis!**

Print
Prep time
30 mins
Cook time
30 mins
Total time
1 hour
This Stove-Top Ratatouille Mac and Cheese recipe is packed with flavor and vegetables, which you can hide in all the delicious cheese sauce and pasta!
Author: The Candid Appetite
Serves: 6 servings
Ingredients
Instructions
3.5.3251