Home » Cheers To The Weekend » Cheers to the Weekend: Steak and Egg Breakfast Sandwiches 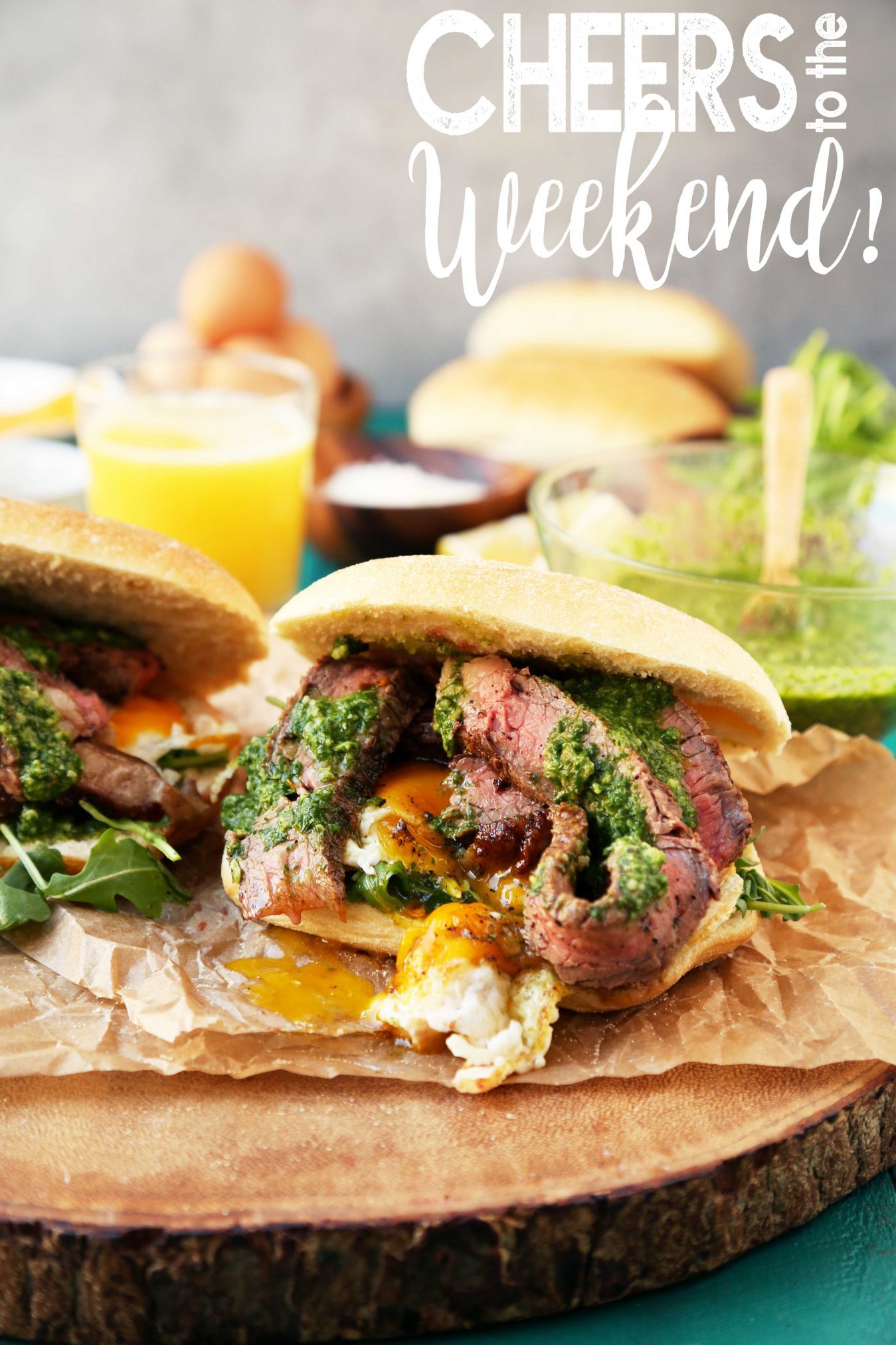 Breakfast is that one meal I feel so bad going out and paying money for, mainly because it’s kind of a highway robbery if you ask me. They are literally charging you an arm and a leg for eggs and potatoes and a piece of toast, which costs nothing at the store. Something you can easily make yourself at home for a fraction of what you’d pay at a restaurant. Now, that’s not to say that I won’t go out for breakfast every now and then because sometimes it’s inevitable and you just can’t help it. Whenever I do go out for breakfast though, I’ll sometimes order steak and eggs. And by sometimes I mean most of the time. That’s when I feel like really splurging because I believe that ordering steak and eggs means you’ve made it in life, right? Downside, It’s never a good piece of steak, either, and even though I know this, I still can’t help but order it.

I decided to take that classic breakfast dish and make it even better by using a nicer cut of meat and turning it into the ultimate breakfast/brunch sandwich. It’s kind of like that time I made Steak and Egg Breakfast Burritos for the same reason, but this time around I’m filling a crusty ciabatta roll with baby arugula, egg, cheese, steak and a homemade pumpkin seed arugula pesto. This is what dreams are made of, I’m certain of it. So if you’re like me and dream of steak and egg breakfasts then this is the moment for you to shine. Make these sandwiches soon so that we can Cheers to the Weekend together, as friends do. 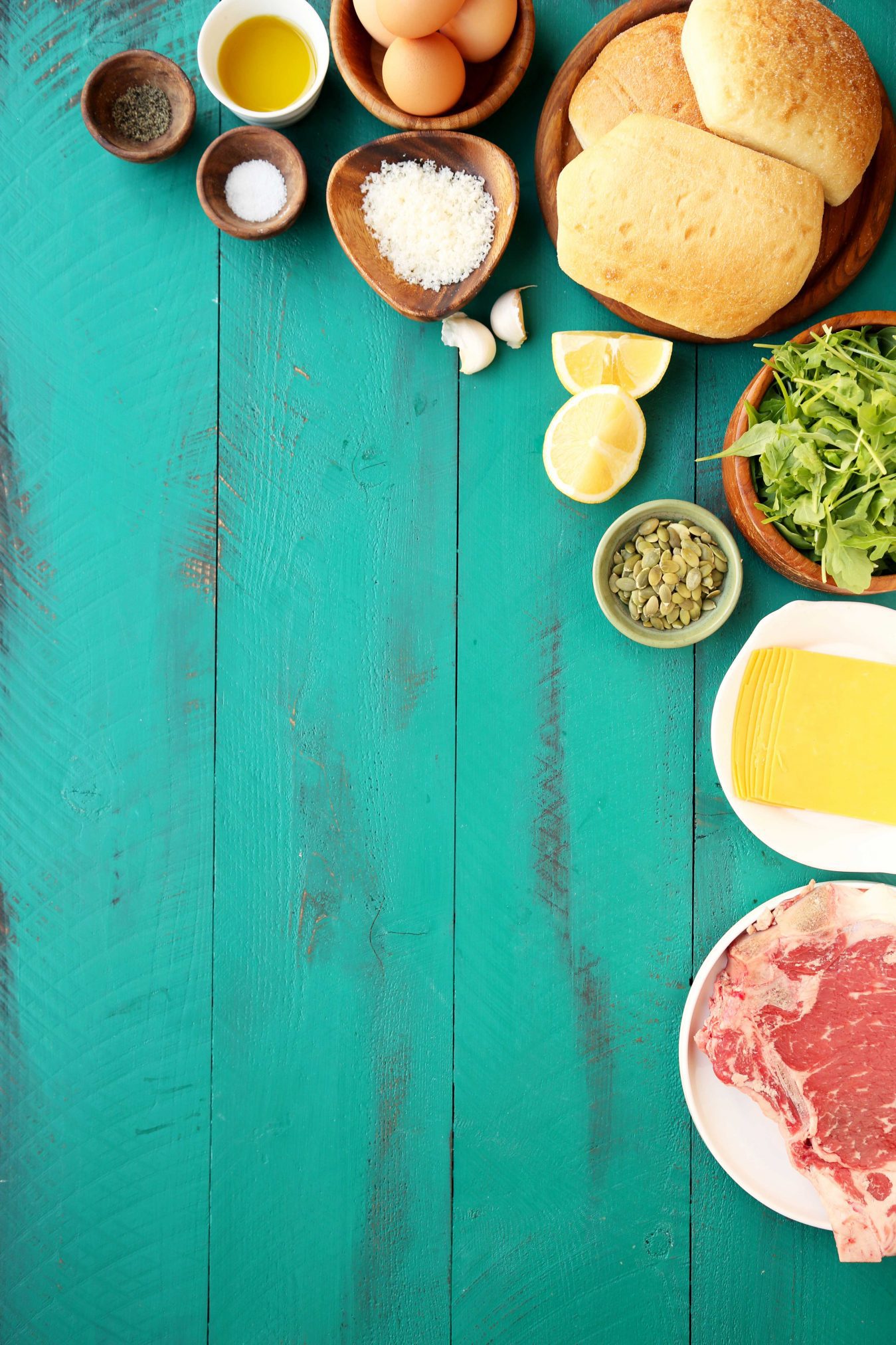 Let’s talk steak for a second. You want a ribeye or a New York strip steak for this recipe, for two reasons. One, because both have a decent amount of fat running through it and Two, because they’re nice cuts of steak without breaking the bank. I mean, you’ll pay a bit more for the ribeye than the strip, so it just depends on what you like. Season both sides liberally with salt, pepper and crushed red pepper flakes for a bit of a kick.

**Note: Don’t be afraid to really season each side very well. Steak lends itself to being seasoned liberally with salt and pepper.** 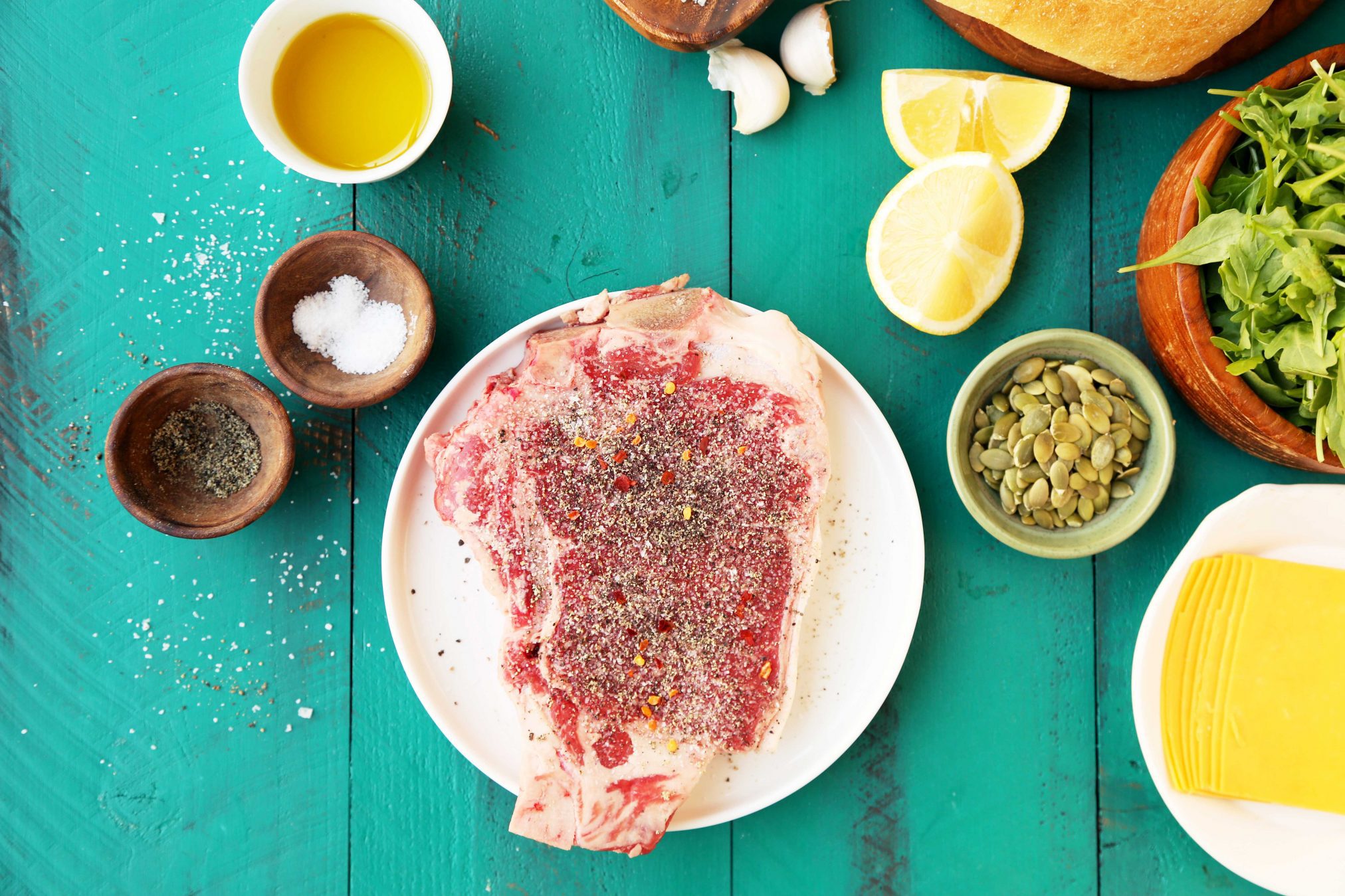 Cook the steak in a very hot cast iron skillet with butter and olive oil until both sides are crusty and the steak is about medium rare (or cook it to your liking), about 10 minutes in total, depending on how big your steak is.

**Note: In order to get a super juicy steak, once you flip the steak over, continue to baste the steak with that butter and oil it’s cooking in.** 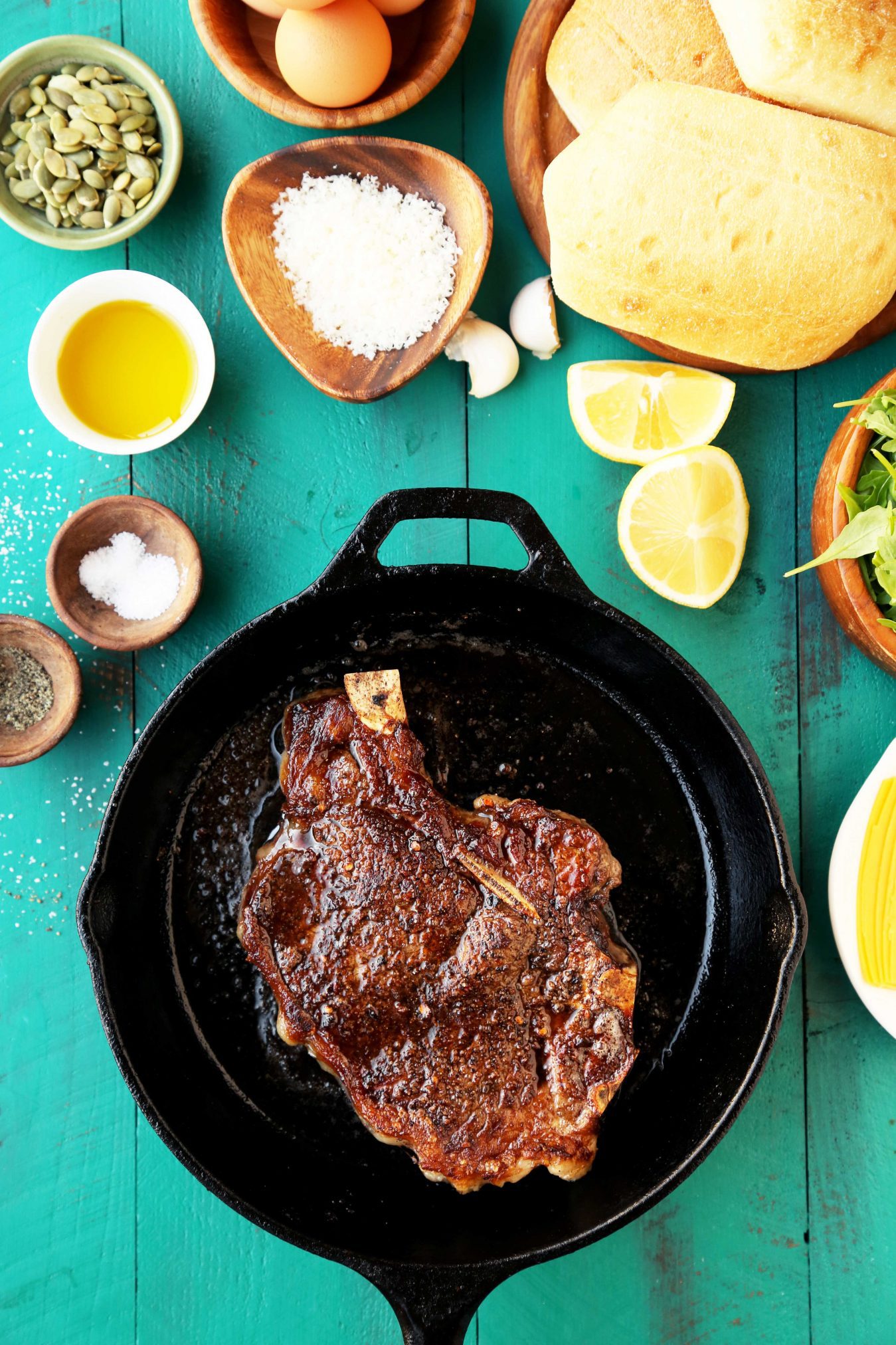 Remove the steak from the skillet and transfer to a plate. Let rest for about 10 to 15 minutes before slicing. In the meantime, let’s make the pumpkin seed arugula pesto. This recipe is from my cookbook The Slider Effect! I use it on pretty much ANYTHING and I recommend that you make a batch and keep it in the fridge for all of your saucy pesto needs. 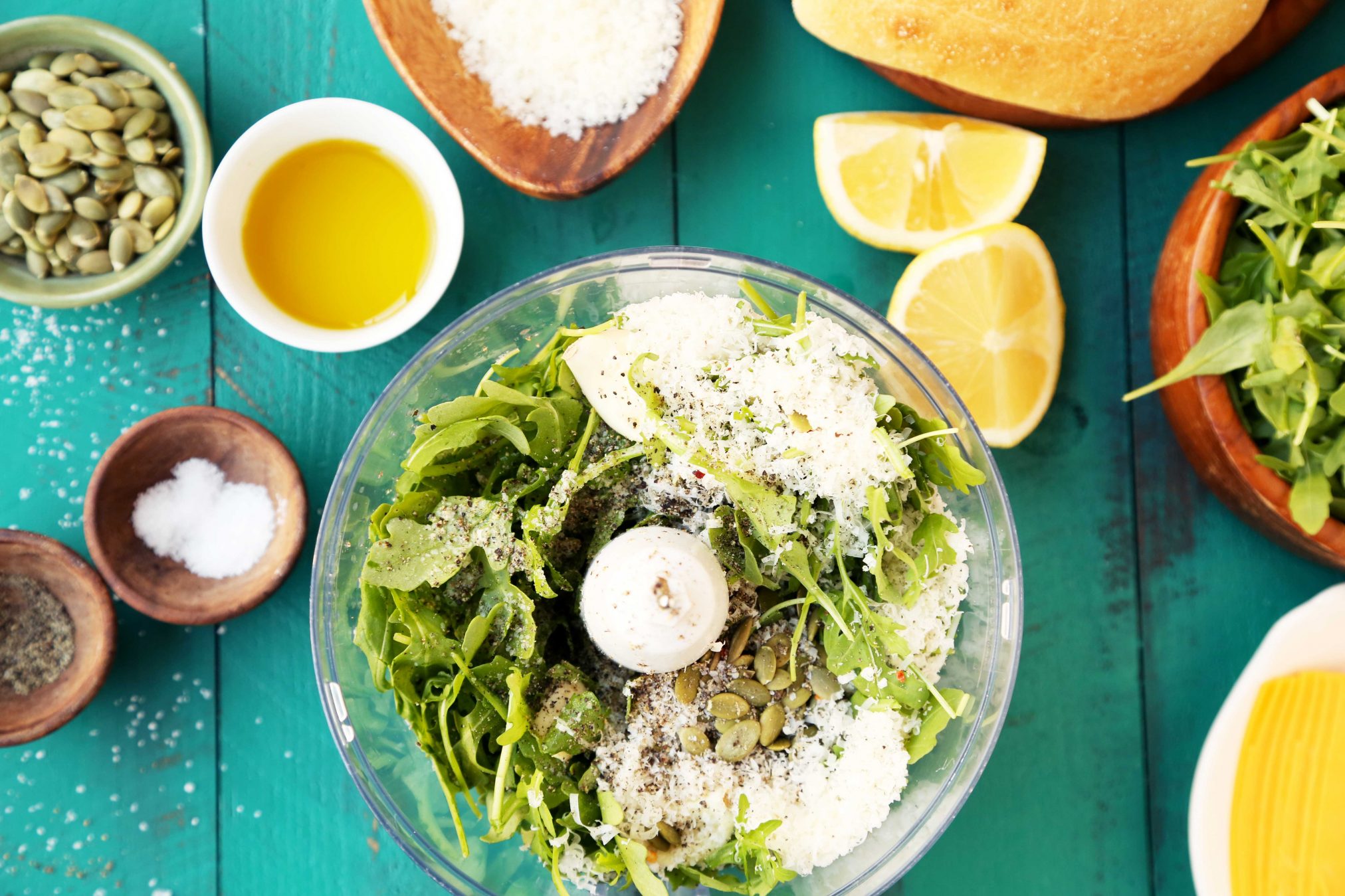 In a food processor, pulse together the arugula, garlic, parmesan, pumpkin seeds, salt, pepper, and lemon juice until finely chopped. While the machine is running, slowly stream in enough olive oil until a thick pourable sauce is reached. Taste and adjust seasonings accordingly.

**Tip: This can be made ahead of time and kept in the fridge in an airtight container or jar for up to 2 weeks.** 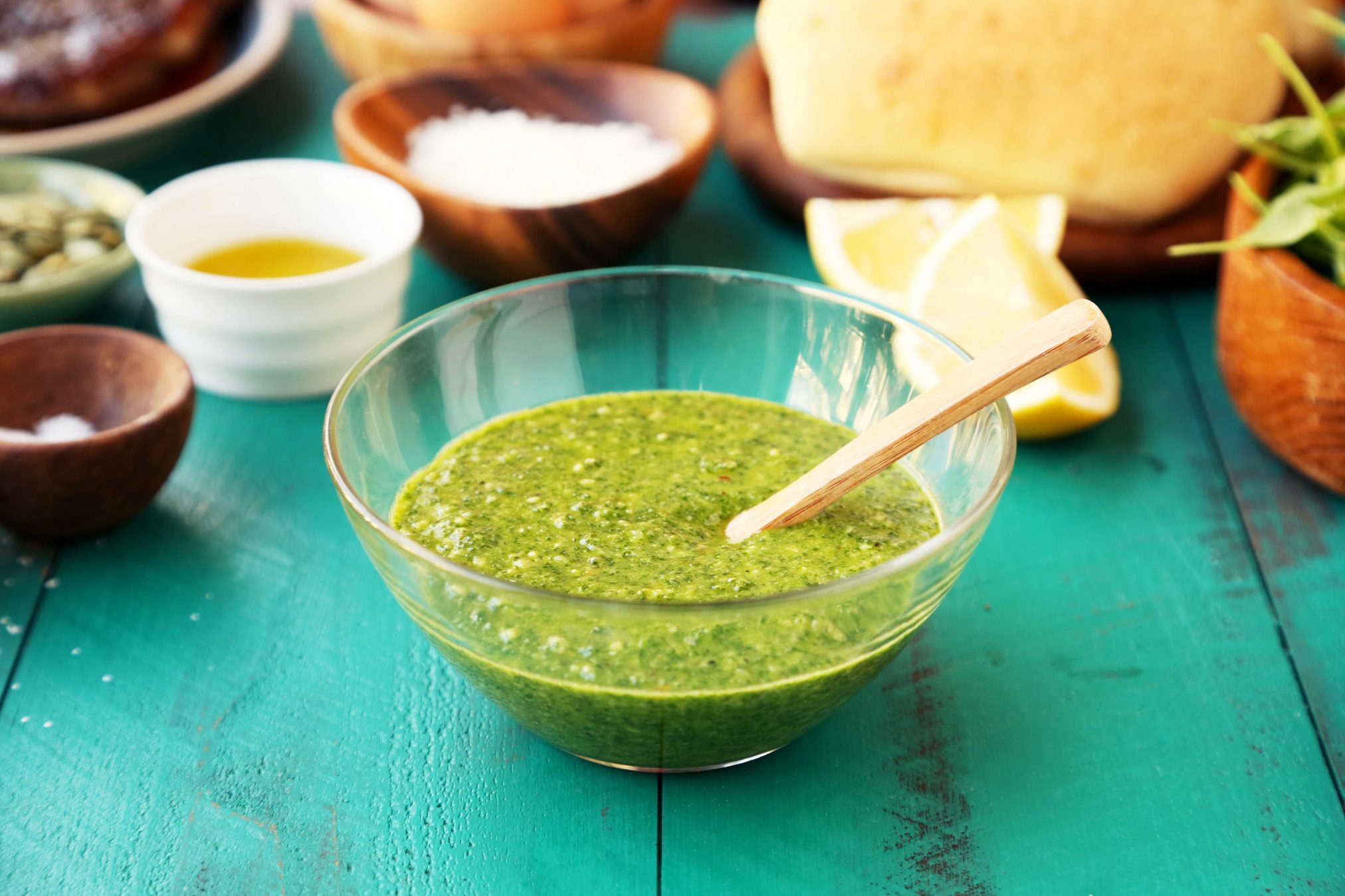 To assemble these sandwiches, I used a nice hearty ciabatta rolls. Toast the rolls in a preheated 350 degree F oven until crusty. Cut in half and slather each half with a heaping amount of pesto. Top the bottom half of the rolls with a handful of baby arugula. That’ll tie in the arugula flavor from the pesto to the sandwich, but feel free to use baby spinach instead if you wish. 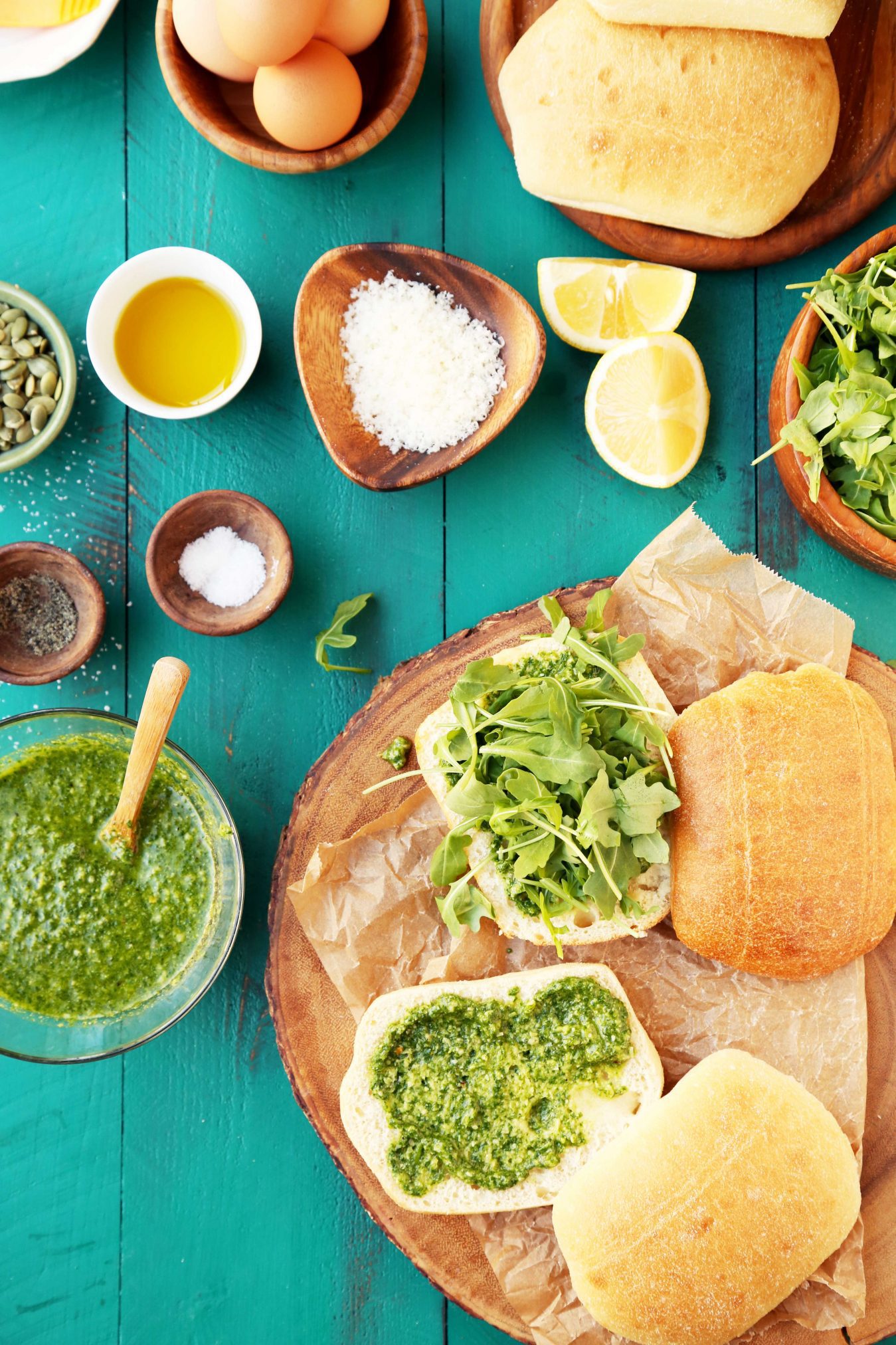 Top the arugula with a cheesy fried egg. That’s just an egg cooked sunny side up or over easy with a slice of cheddar on top until melted. Then once the steak has rested, thinly slice it and pile it on top of the cheesy egg. Feel free to really load up the sandwiches with slices of steak. 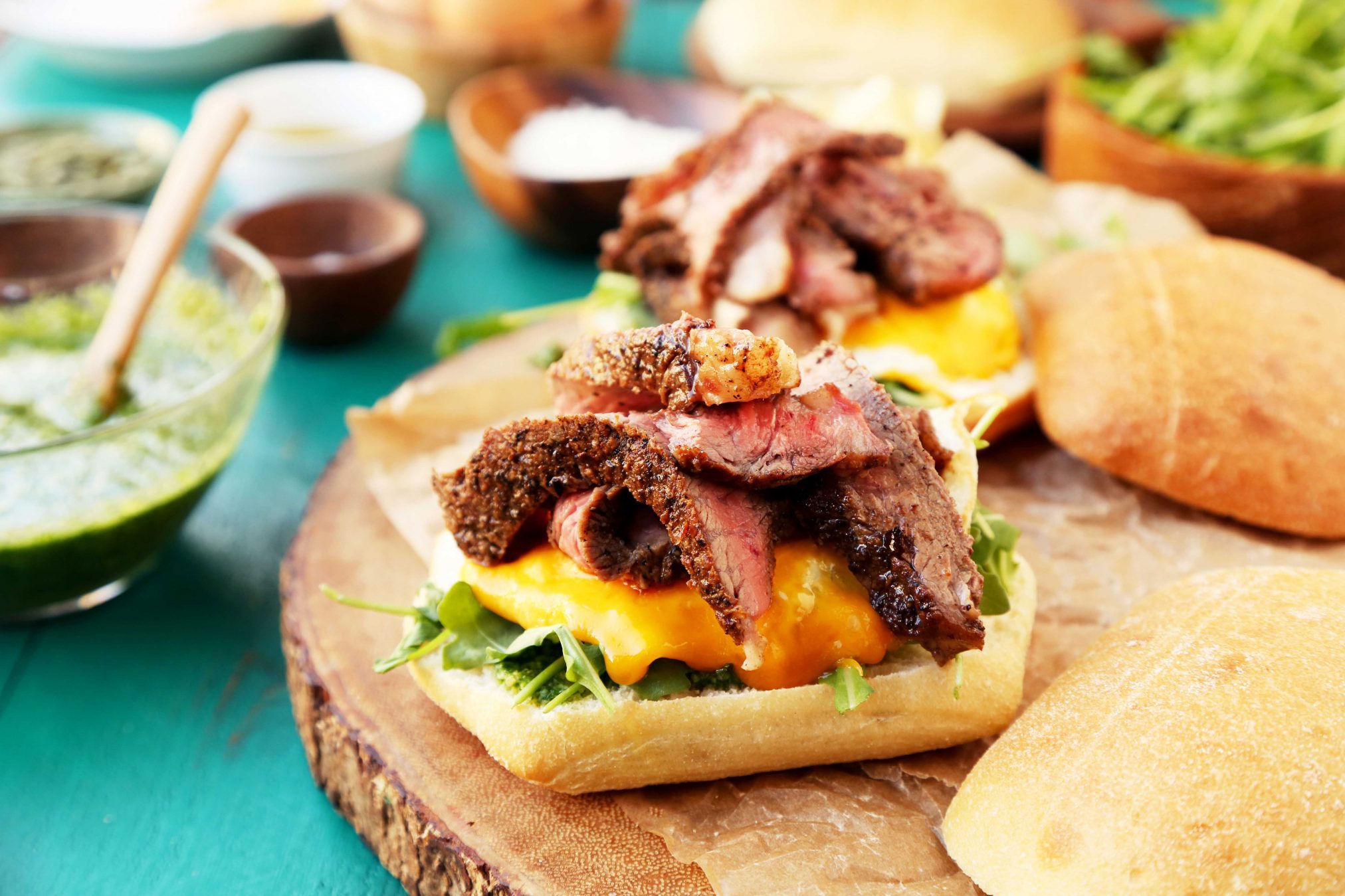 Drizzle the steak with more pesto if you wish, and then sandwich together with the top bun. Serve them right away and right before eating them, squish the sandwich together so that the yolk breaks and drips down the sandwich. That’ll give it an even better flavor, and to me it’s the best part to any breakfast/egg sandwich. 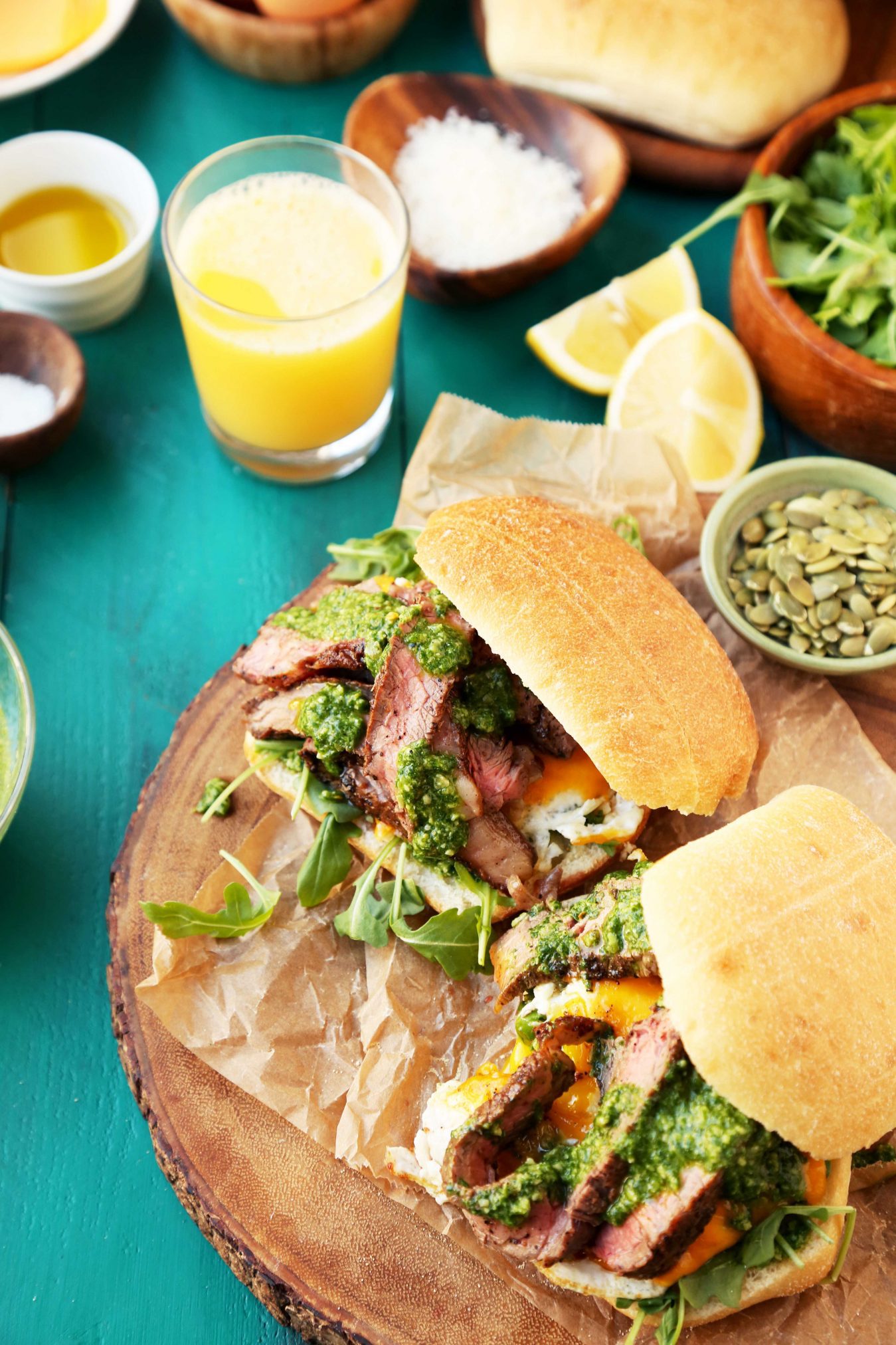 If you’re not a fan of runny yolks, which some people really aren’t (my sister included) then you can cook them over hard or you can scramble the eggs and then just pile the scrambled eggs onto the sandwiches and proceed as directed from there, loaded with steak, cheese and more pesto. The great thing about them is that they’re customizable and can be adapted to fit anyone’s tastes. 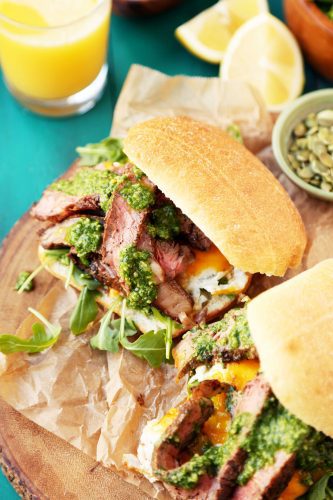 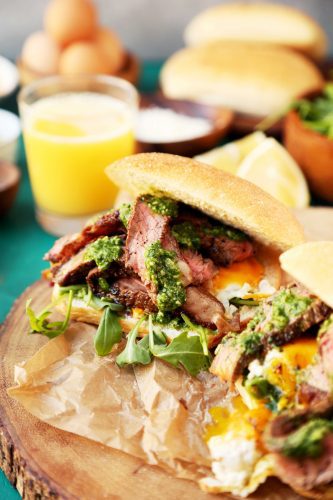 If  you really want to make these sandwiches even faster with less work, go ahead and use store-bought pesto instead. I know we don’t always have time to make everything from scratch and I totally won’t blame you if you take some help from the store. These are the sandwiches you make for brunch because they’re easy and you can totally make them without much effort. 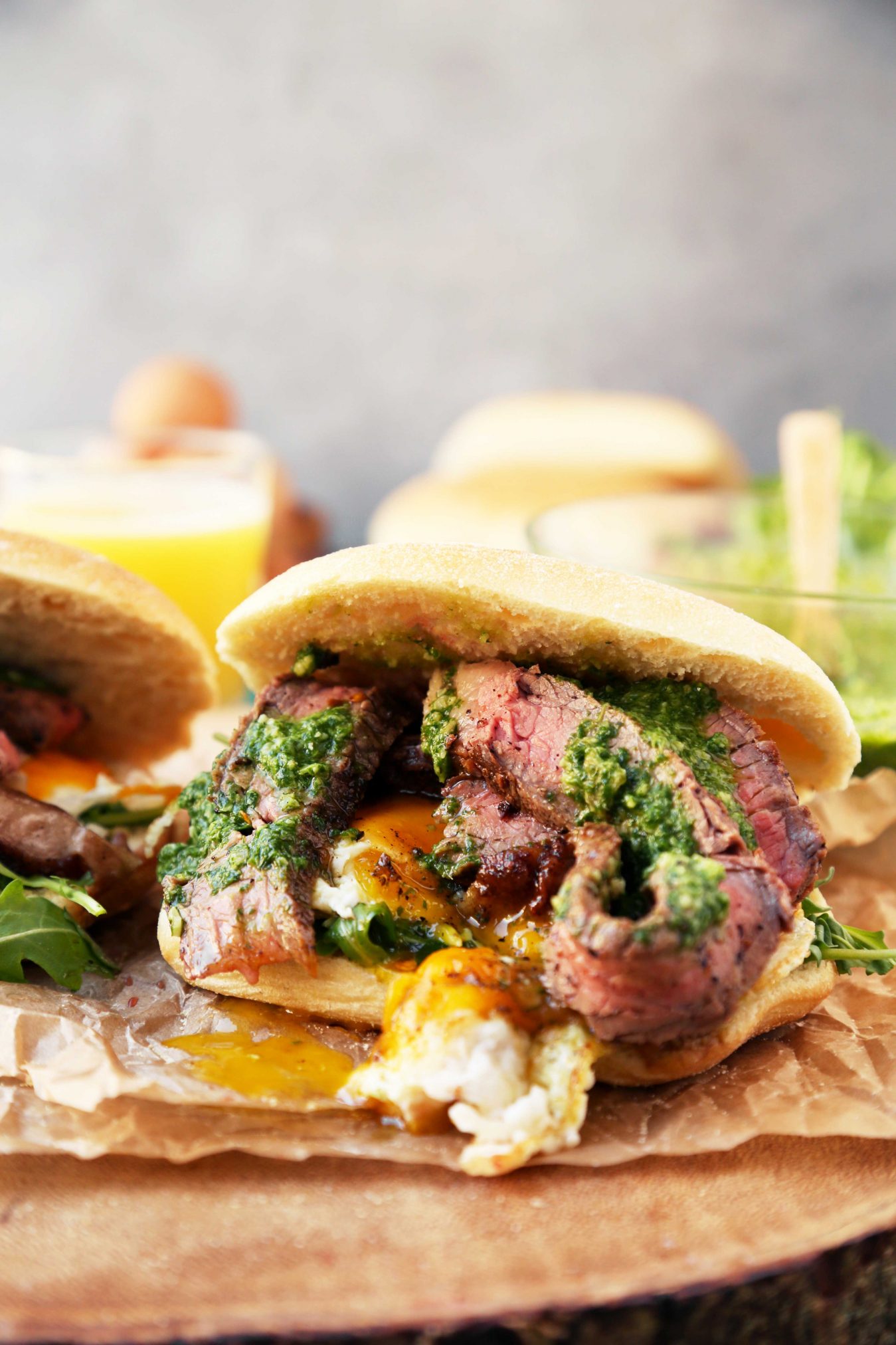 If you make this recipe, along with any other recipe from the site, be sure to snap a picture and share it on Instagram or Facebook and tag me and hashtag it with #CandidAppetite or #TheCandidAppetite. Once you start making these Cheers to the Weekend recipes, be sure to also tag it with #TCAweekend! I’ll be monitoring it all closely and share my favorites throughout! Happy Cooking! 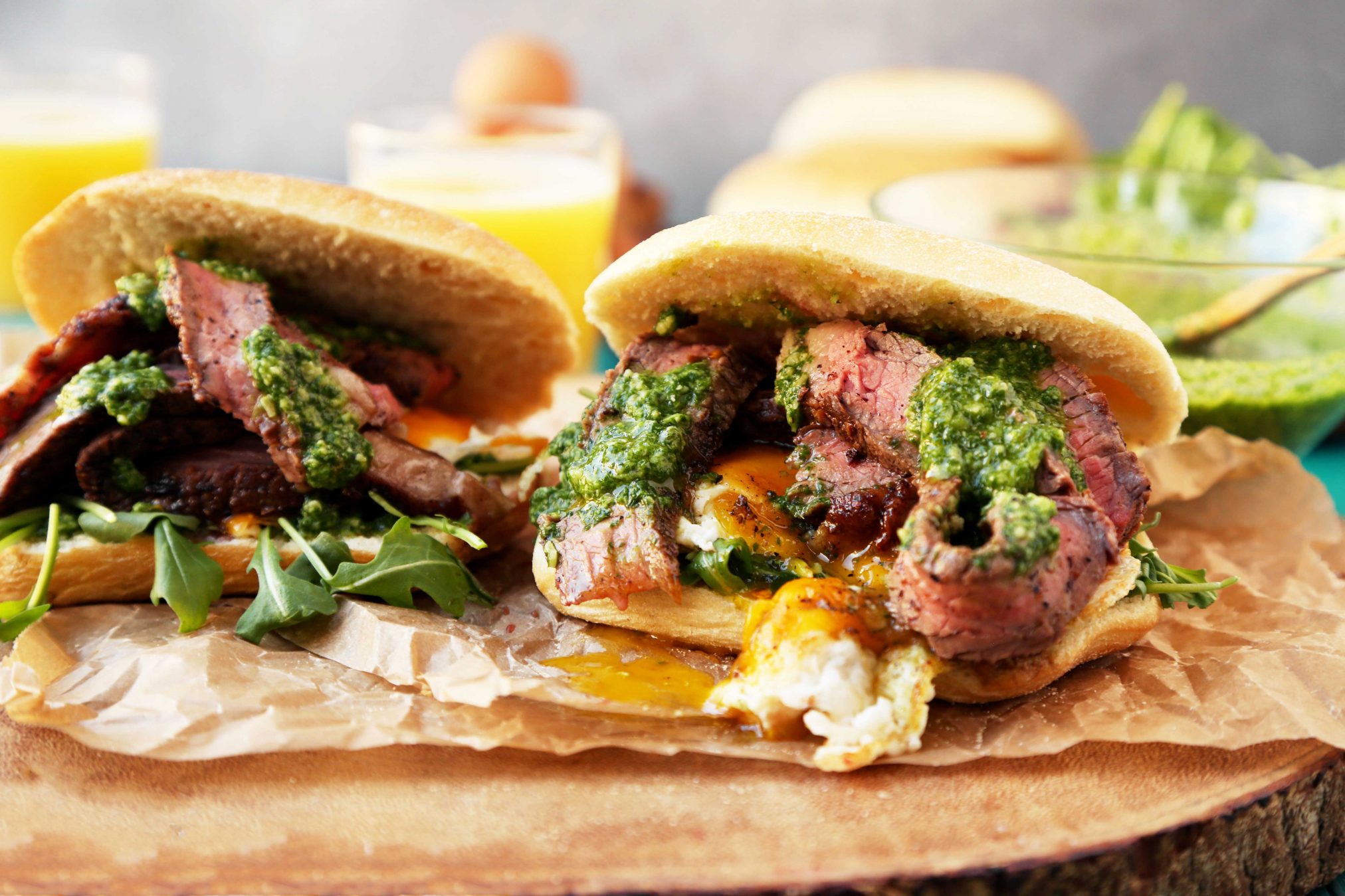