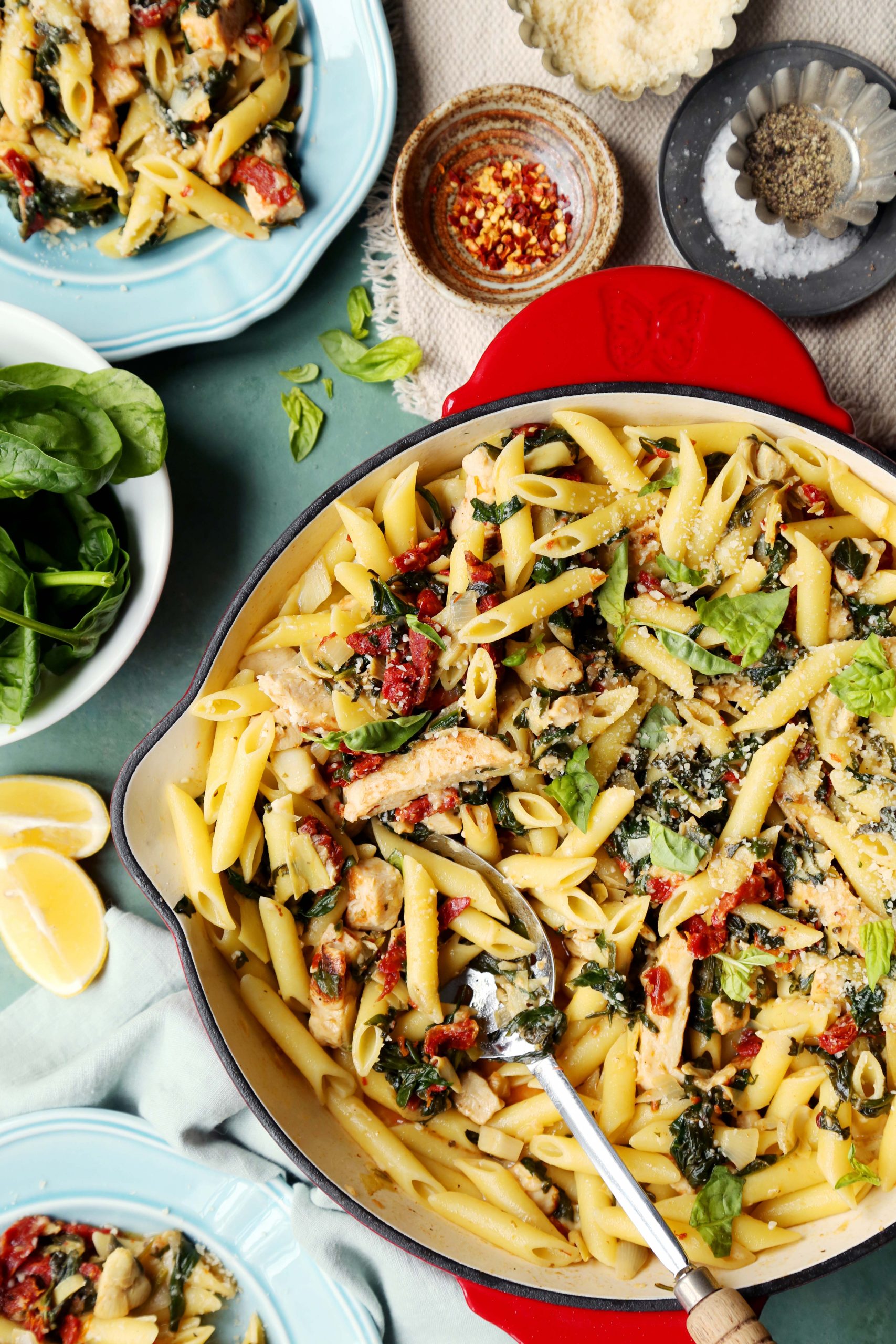 I’m trying my best to share quick and easy recipes on the blog because I know we could all use them right now. The stores aren’t stocked up and our pantries are our best friends at the moment. The first recipe was a Gnocchi Broccoli Cheddar Soup, which is the ultimate comfort food in a bowl. Today, I’m sharing this Spinach and Artichoke Pantry Pasta. It’s basically any kind of pasta with whatever ingredients you have on hand, which is why this recipe is so easy to make and really isn’t much of a recipe. Cooked chicken, jarred sun-dried tomatoes, canned artichoke and fresh spinach is what I found. It came together for me because I went to the grocery store earlier in the week and I looked around and tried to think of recipes with the little bit left on the shelves. Utilize as much of the fresh produce as you can find because it’s so easy to forget to eat healthy during this time. That’s my tip for the day, and I hope these recipes help. Let me know if you have any questions below. 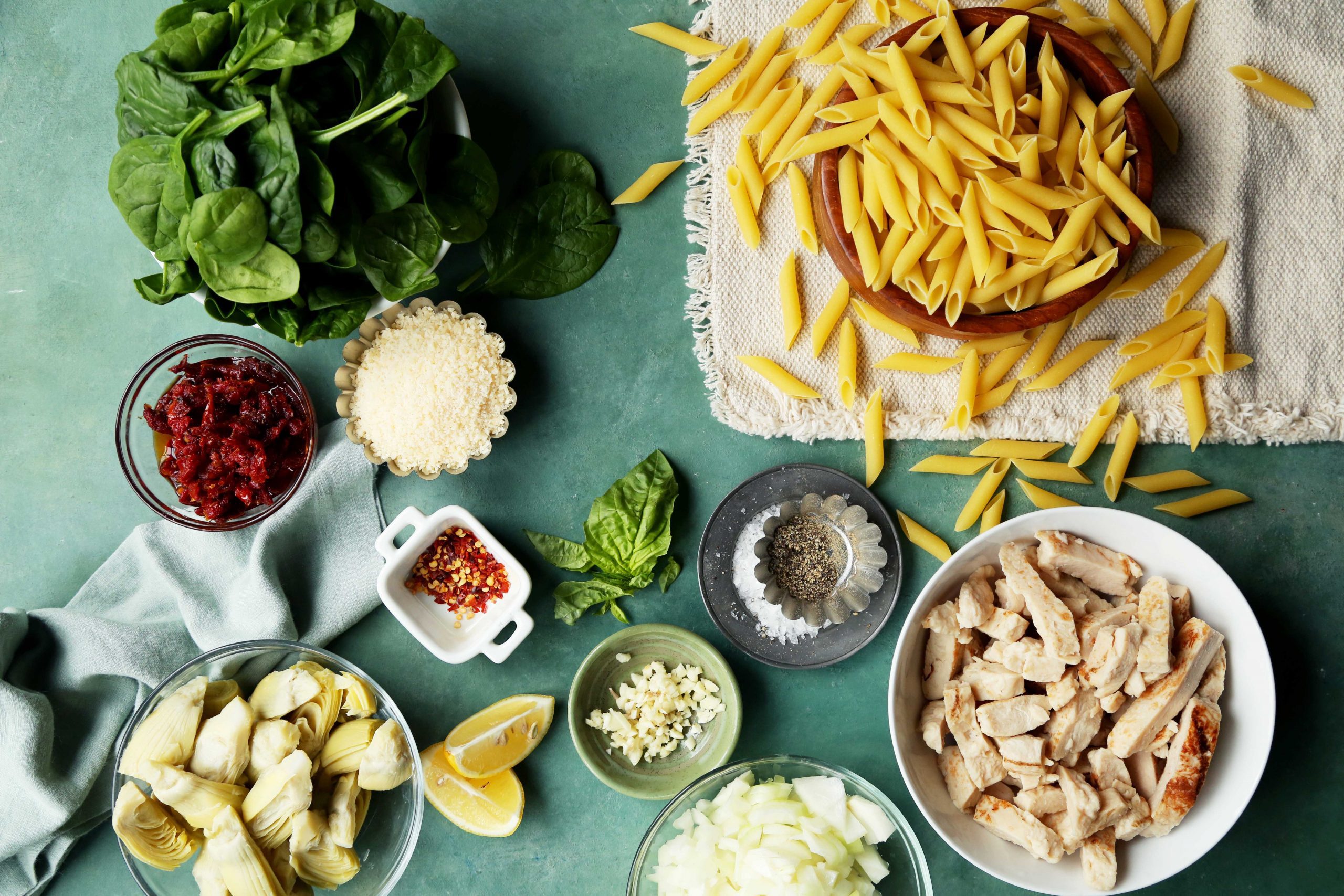 Set a very large skillet over moderate heat. Once hot, drizzle in the oil and add the onion and garlic. Cook, stirring often, until translucent, about 2-3 minutes.

**Note: You can use any kind of onion you have on hand. Red onion, shallot or even scallions will do in a pinch! I always have brown onion on hand so that’s what I used!** 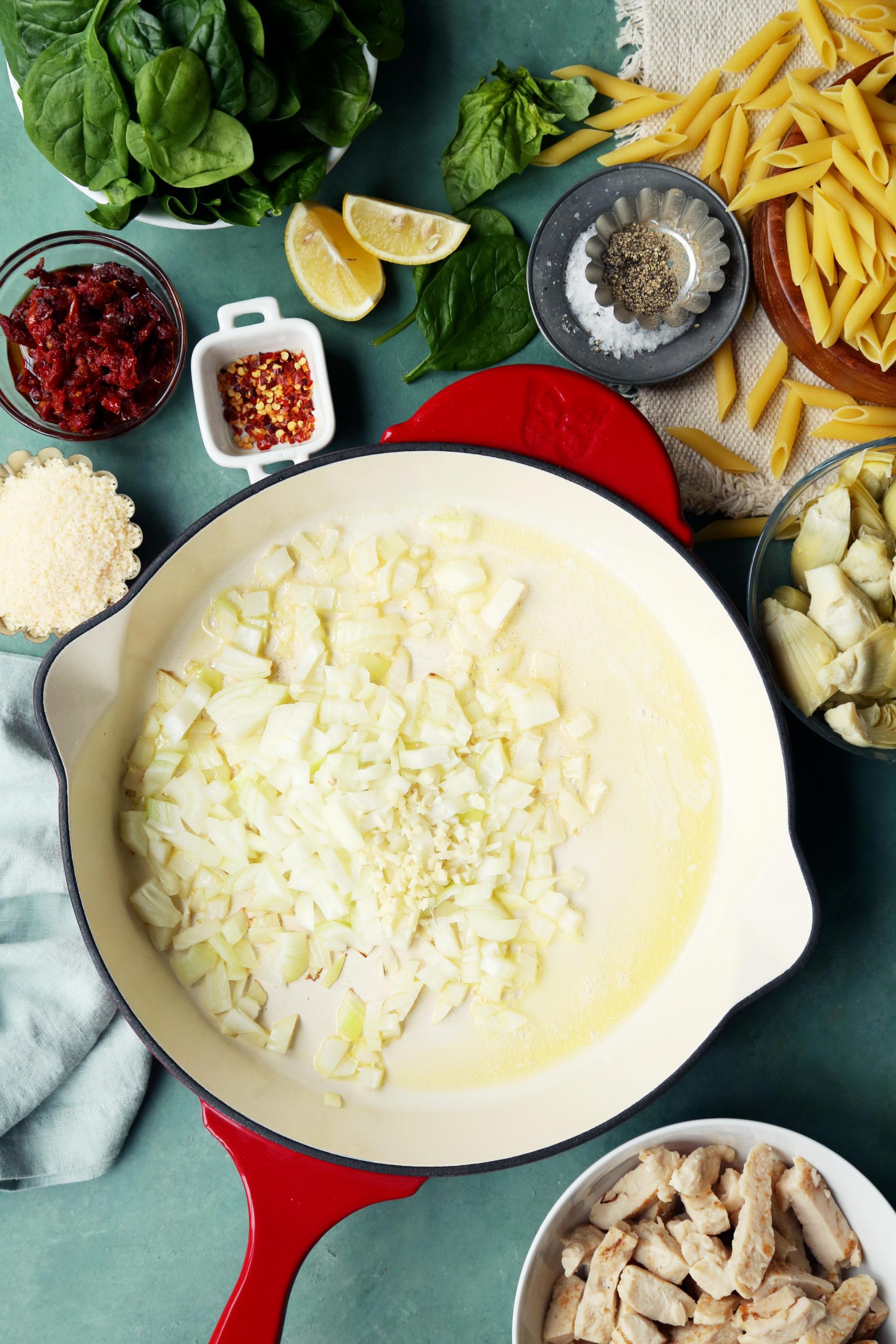 Stir in the spinach and artichoke hearts. Season with a pinch of salt, pepper and crushed red pepper flakes and cook until the spinach has just wilted.

**Note: Because this is a “pantry” pasta, I don’t want you to get bogged down on specific ingredients. You can literally use almost anything you have on hand. If you have frozen spinach, you can use that as well. Just make sure you squeeze out as much of the liquid as possible so that it doesn’t water down your pasta. Jarred artichoke hearts will work as well!** 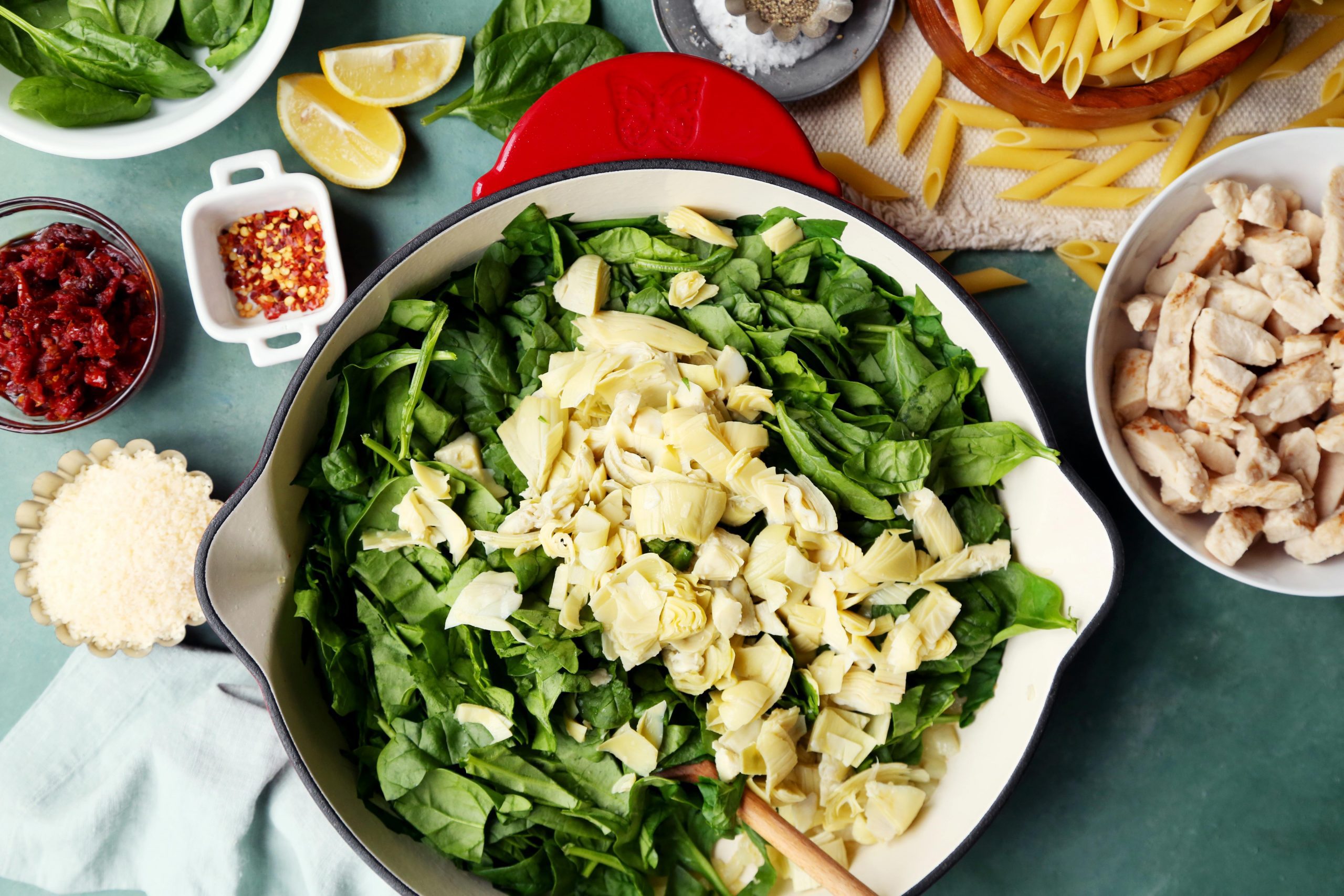 Add the cooked chicken, sun-dried tomatoes with their oil, and fresh lemon juice. Cook over low heat to warm everything up, making sure to stir as often as possible.

**Note: When I went to the grocery store, of course all of the chicken was gone. But I did find a couple packets of cooked grilled chicken, so I just used that. But if you have leftover chicken, you can use that. You can also cook chicken from scratch (either grilled, sautéed or boiled) and then just slice it and stir into the pan. Of course, meatless would be great as well!** 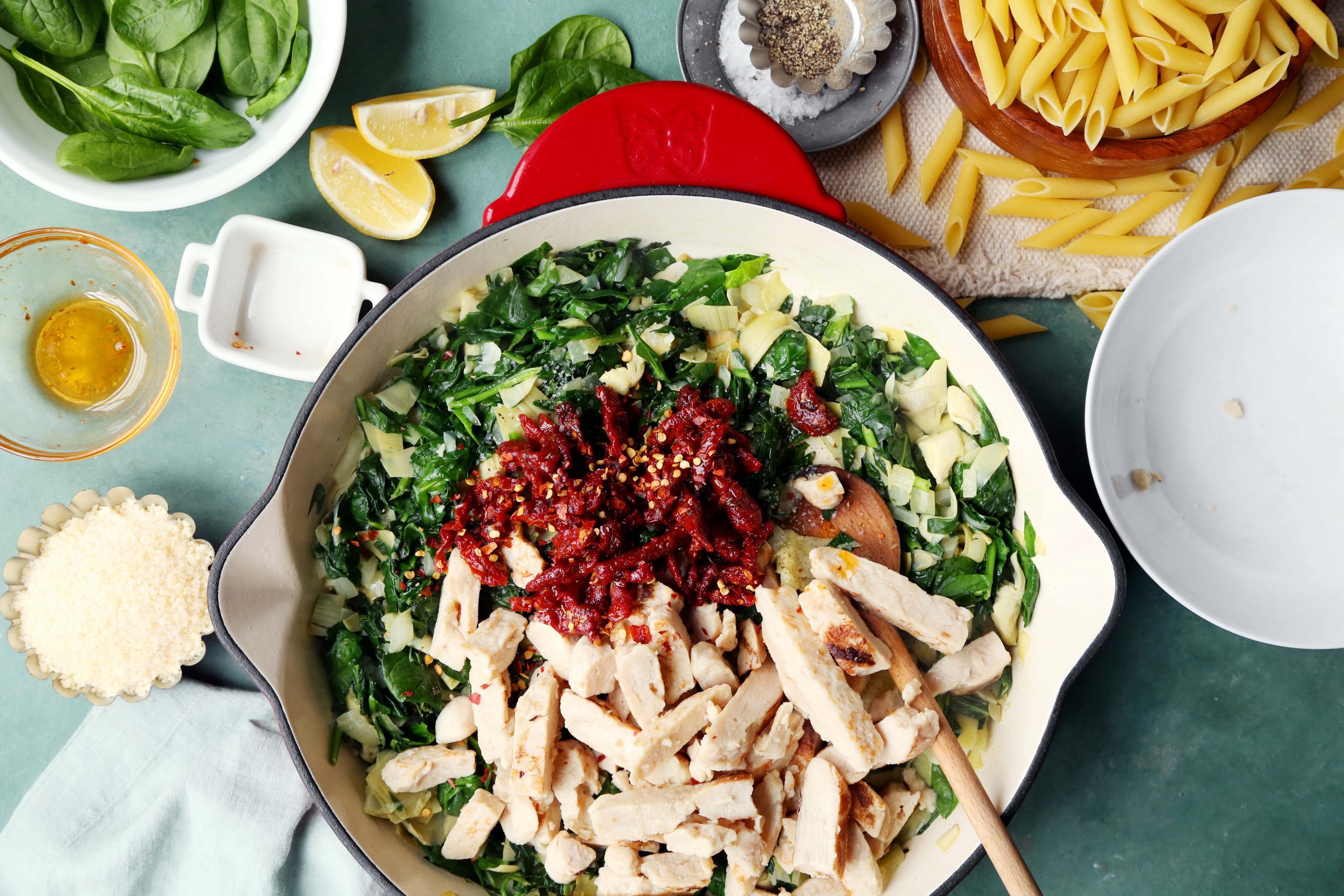 I know I keep reiterating that you can use whatever you have on hand, but I think it’s worth stressing it. Canned garbanzo beans or sliced sliced olives would be amazing in this as well! 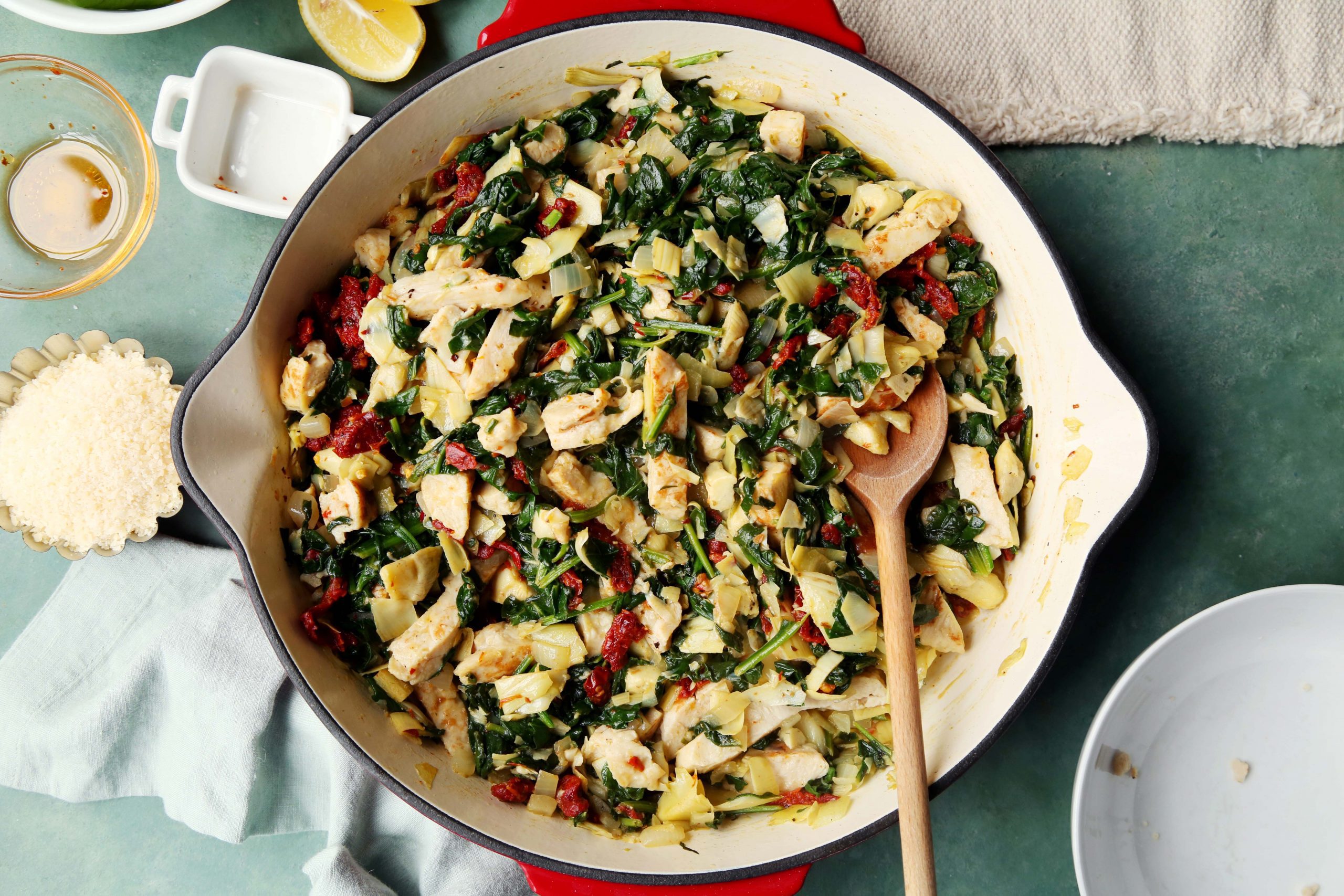 **Note: Literally any type of pasta works fine. I had penne but any other short cut pasta or even long noodles would be great. Tortellini would be delicious as well! You can also swap out the parmesan for feta if you have that instead!** 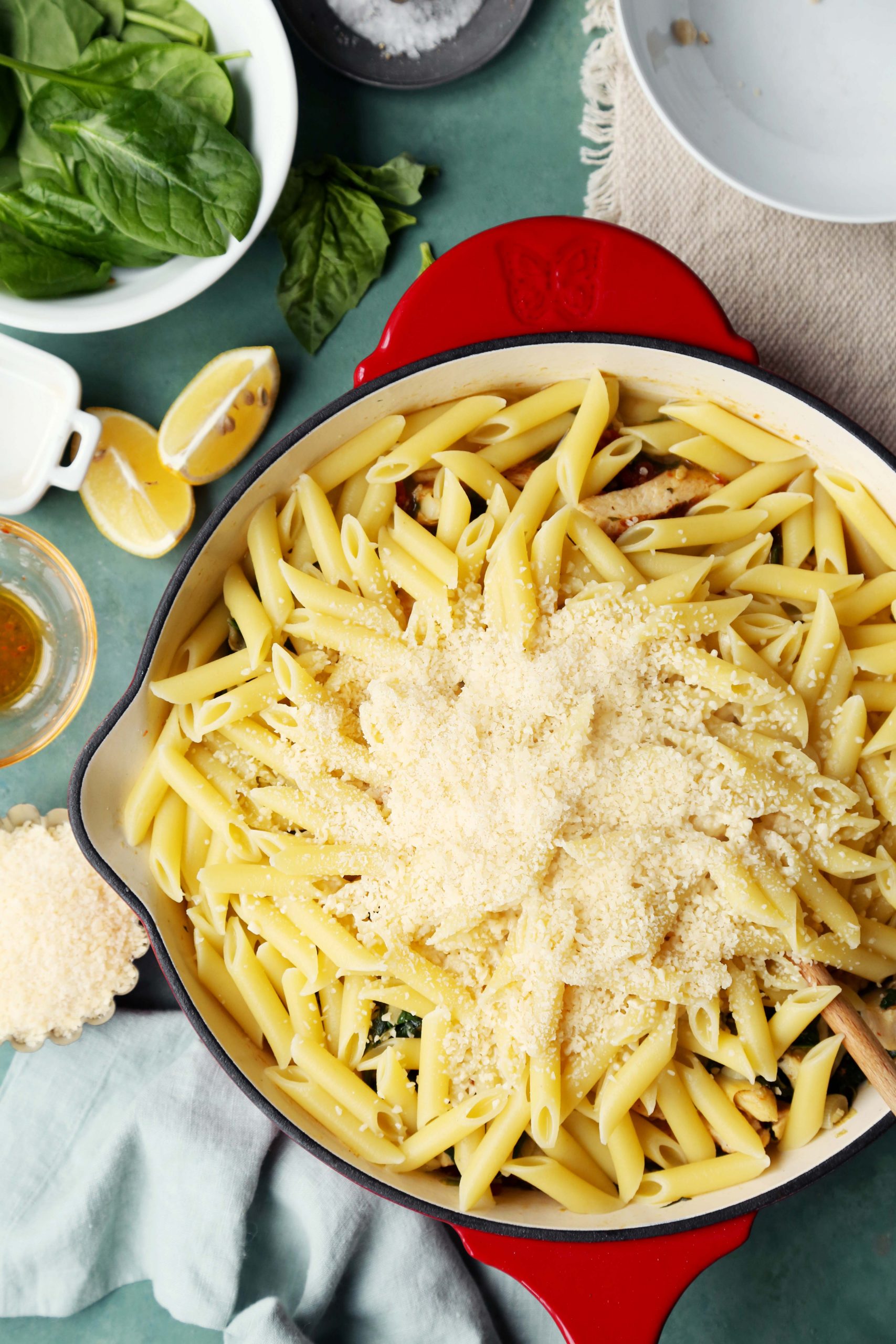 Cook until the liquid has almost evaporated, stirring often so that it doesn’t stick and burn. Serve the pasta in bowls and garnish with fresh basil and a sprinkle more of parmesan.

**Note: The basil is just to add a bit of freshness to the pasta because I think it adds a nice brightness, but if you don’t have any on hand you don’t have to worry about it. Fresh parsley would be fine in a pinch as well!** 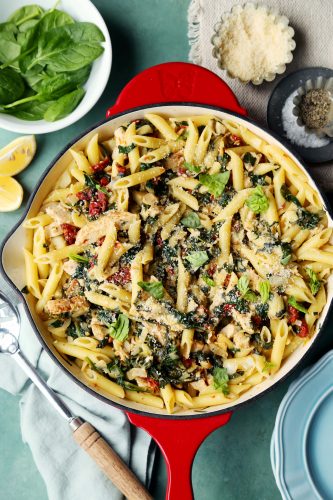 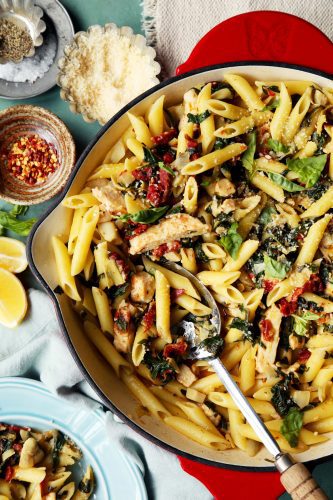 If you don’t have sun-dried tomatoes on hand, a great alternative would be jarred roasted red bell peppers if you have them. Fresh tomatoes or cherry tomatoes are all good options as well. 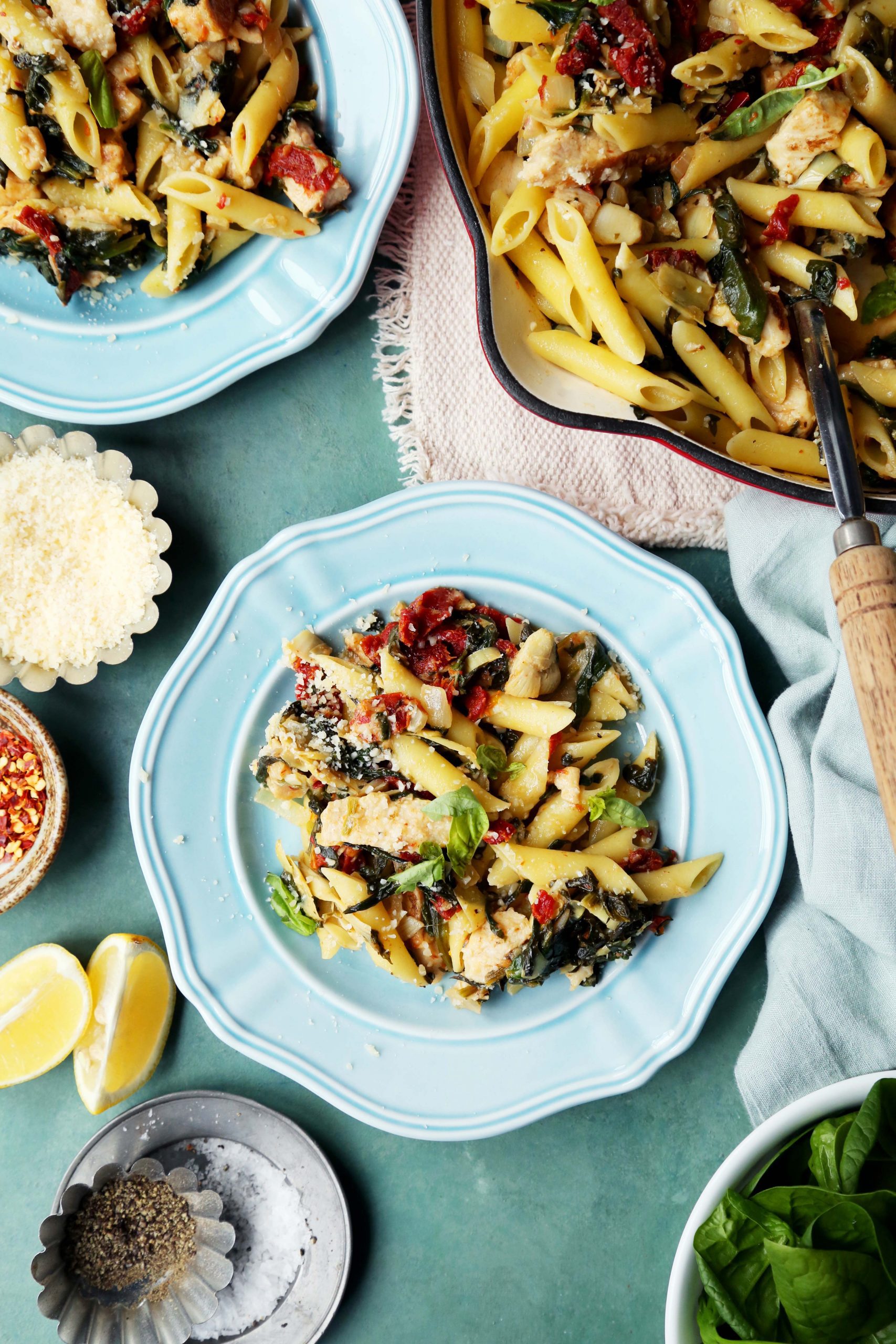 I want to make sure you have enough options when trying out this pasta. I know that times are a bit tough right now and that grocery stores aren’t fully stocked or perhaps you don’t want to leave the house and so you should be able to make this recipe with whatever you find in your fridge, freezer and/or pantry. If you have any questions about substitutions don’t hesitate to leave a comment below! Stay safe out there, sending you all good wishes. 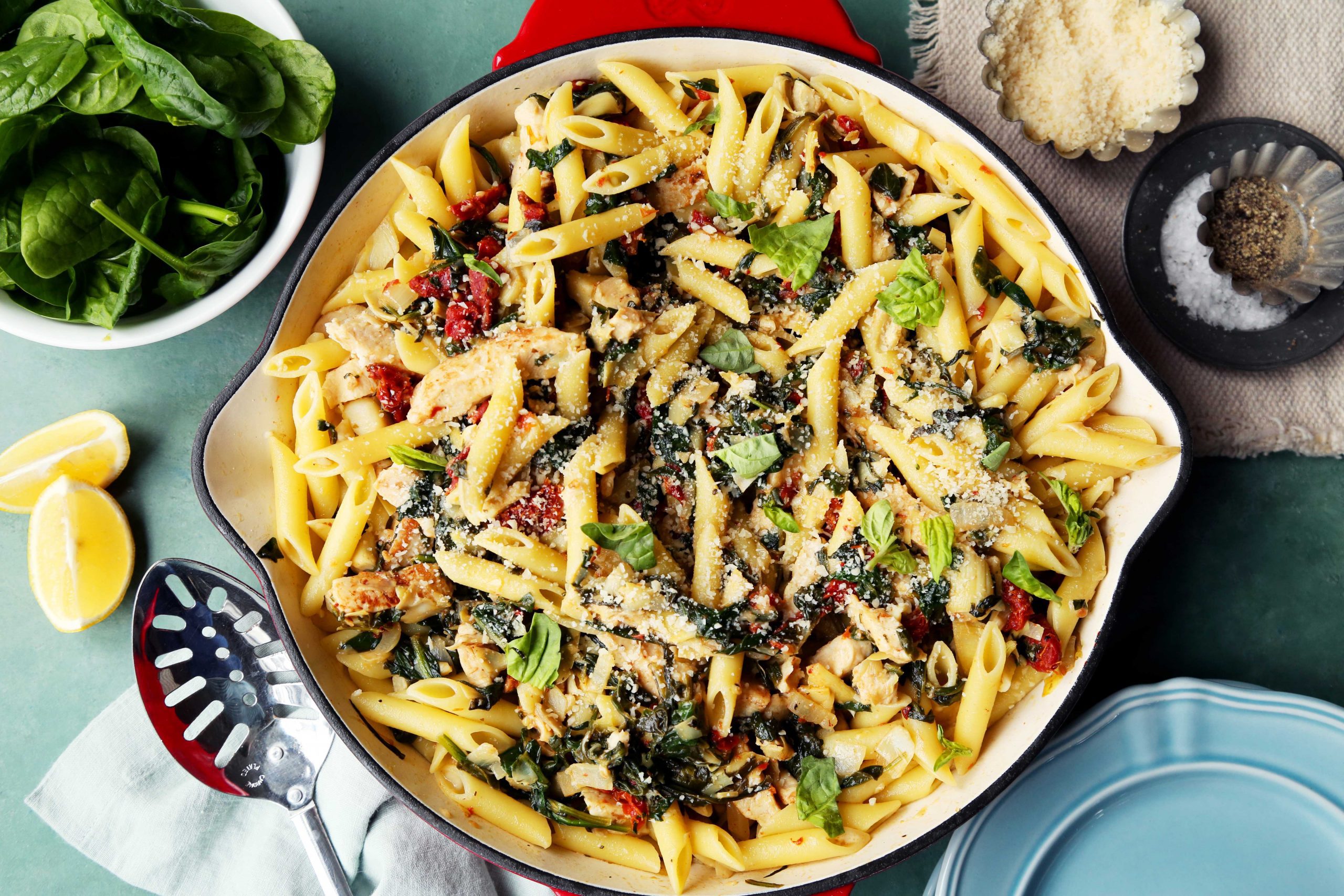 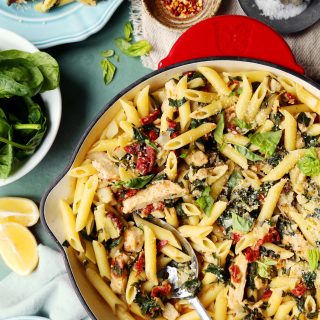 Print
Prep time
10 mins
Cook time
20 mins
Total time
30 mins
This Spinach and Artichoke Pantry Pasta is the perfect recipe to make right now because you can use up whatever you have on hand. Anything literally works in here!
Author: The Candid Appetite
Serves: 6 to 8 servings
Ingredients
Instructions
3.5.3251