Home » Cheers To The Weekend » Cheers to the Weekend: S’mores Slab Pie 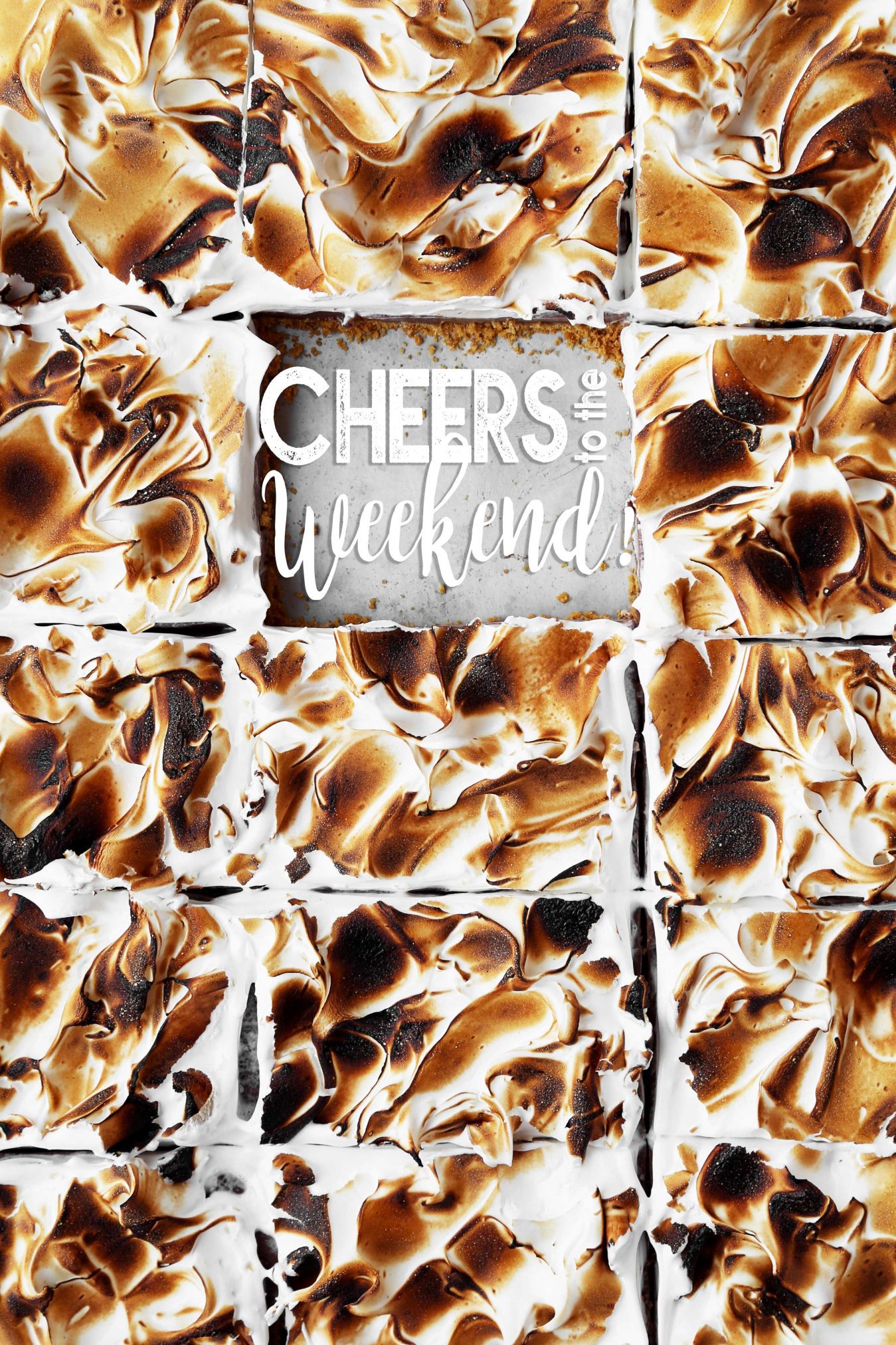 The way I look at it, the sole purpose of making a slab pie is to either A). feed a crowd or B). have an excuse to eat a giant pie all by yourself. Let’s be honest though, If I was given the option, I would definitely choose the latter because when it comes to this S’mores Slab Pie the more for me the merrier. I’m like Gollum from Lord of the Rings, standing over this pie and repeatedly calling it “my precious.” Something tells me you will be too when you make it for yourself. It’s simple, but life changing at the same time.  It’s that time again for us to Cheers to the Weekend, and since we’re all friends here, I can’t let you celebrate the weekend without sharing the recipe for this particular slab pie. Since it is officially summer now, and because I’m a sole believer that s’mores is THE quintessential summer dessert and/or treat, I think this is coming at ya at the perfect time. Give it a try this weekend, find some people to share it with, and live your best life. I’m counting on you. The world is counting on you. 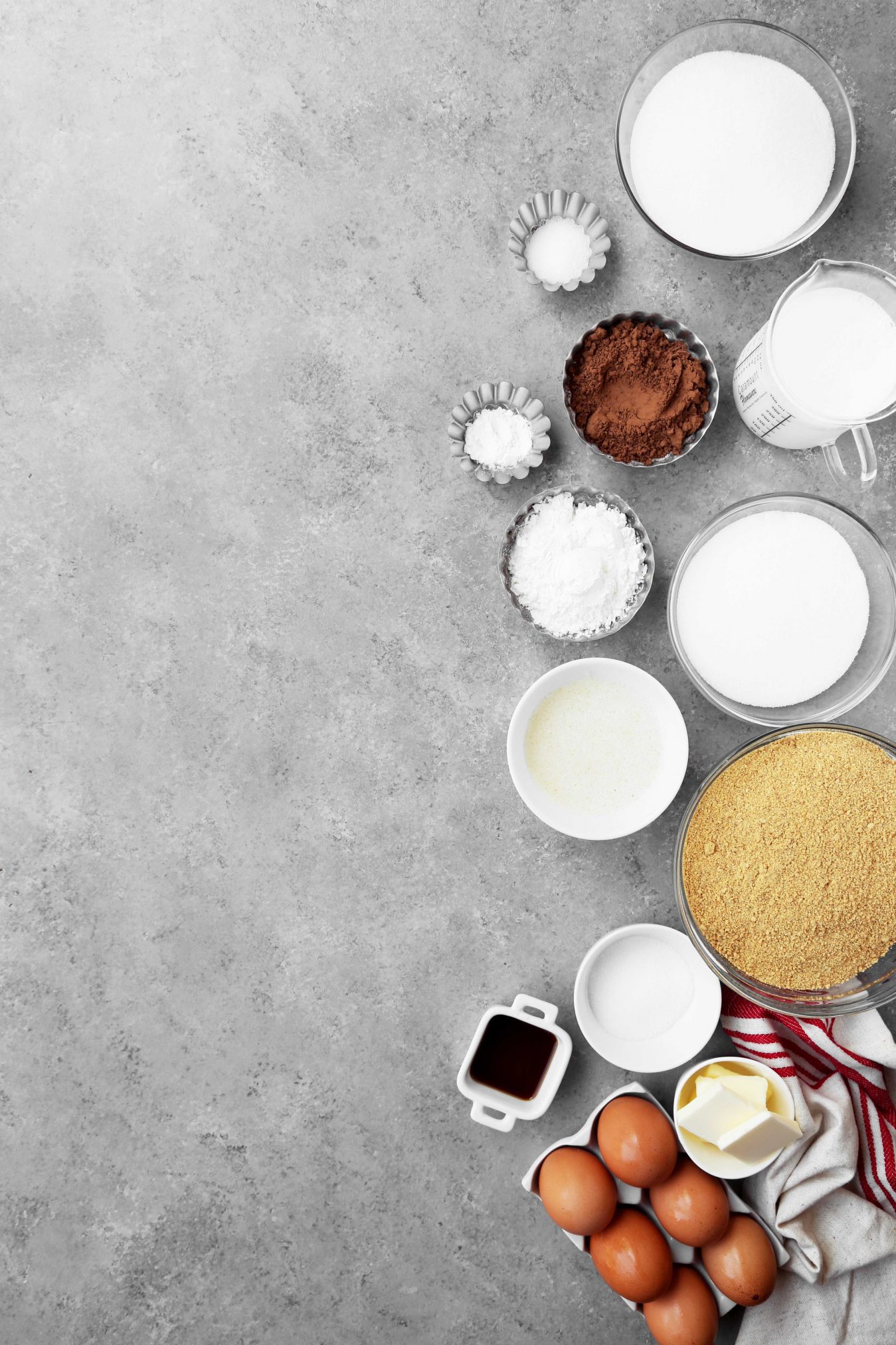 Let’s work on the crust for this huge pie. In a large bowl, stir together the melted butter, sugar and salt, until evenly combined. The mixture should resemble the texture of wet sand. 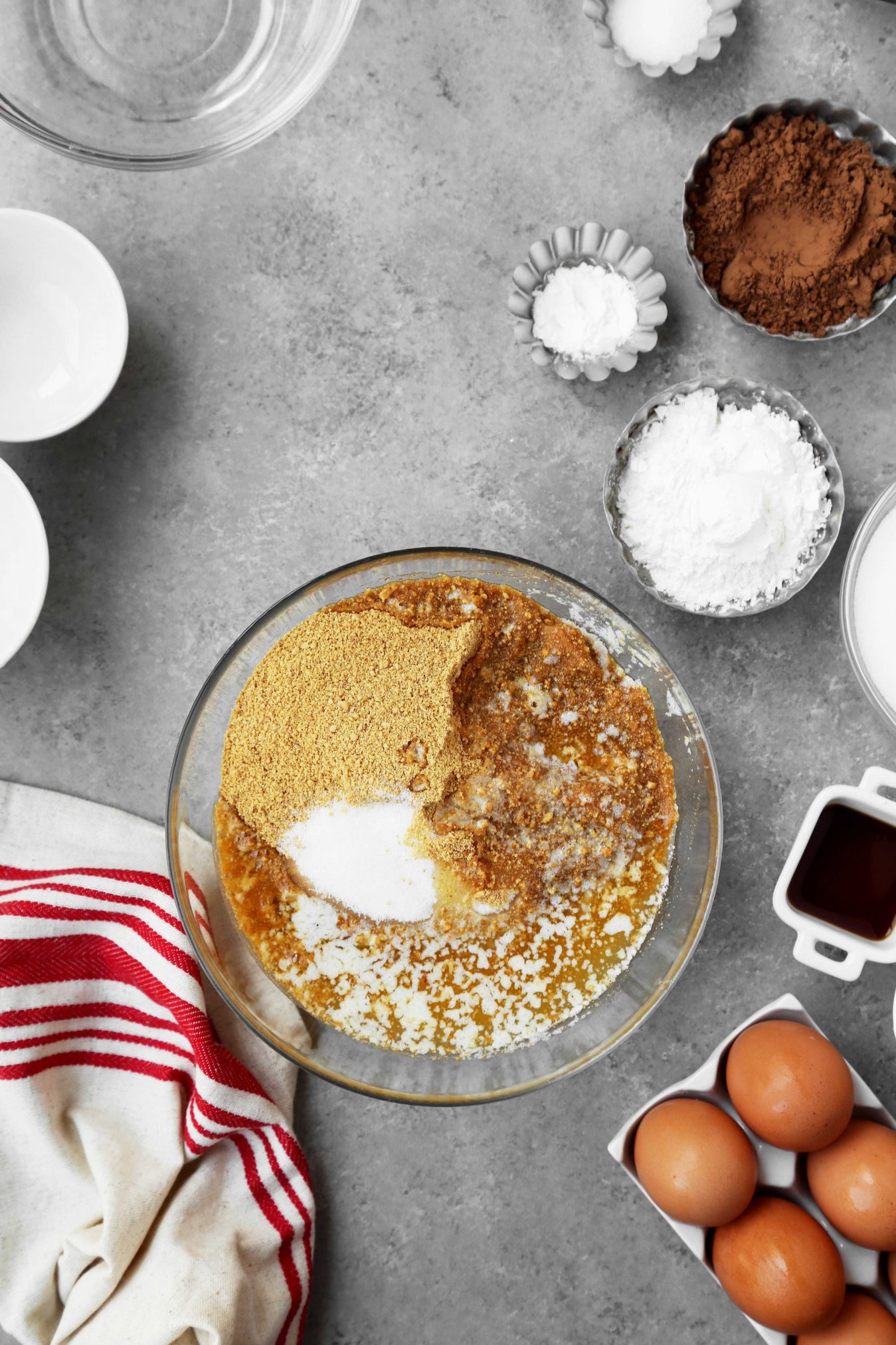 Pour out the mixture onto a greased half sized baking sheet (18x13inches) and press out into an even flat layer. You can use your hands or the flat side of a measuring cup.

**Note: I think I’ve said this multiple times on the blog already, but if you invest in anything for your kitchen, please let it be a couple of these heavy duty baking sheets. They’re awesome for baking, roasting, and just cooking in general. I love them because they’re sturdy and they don’t warp during baking. I find them here on amazon, but you can also find them in almost any restaurant supply store!** 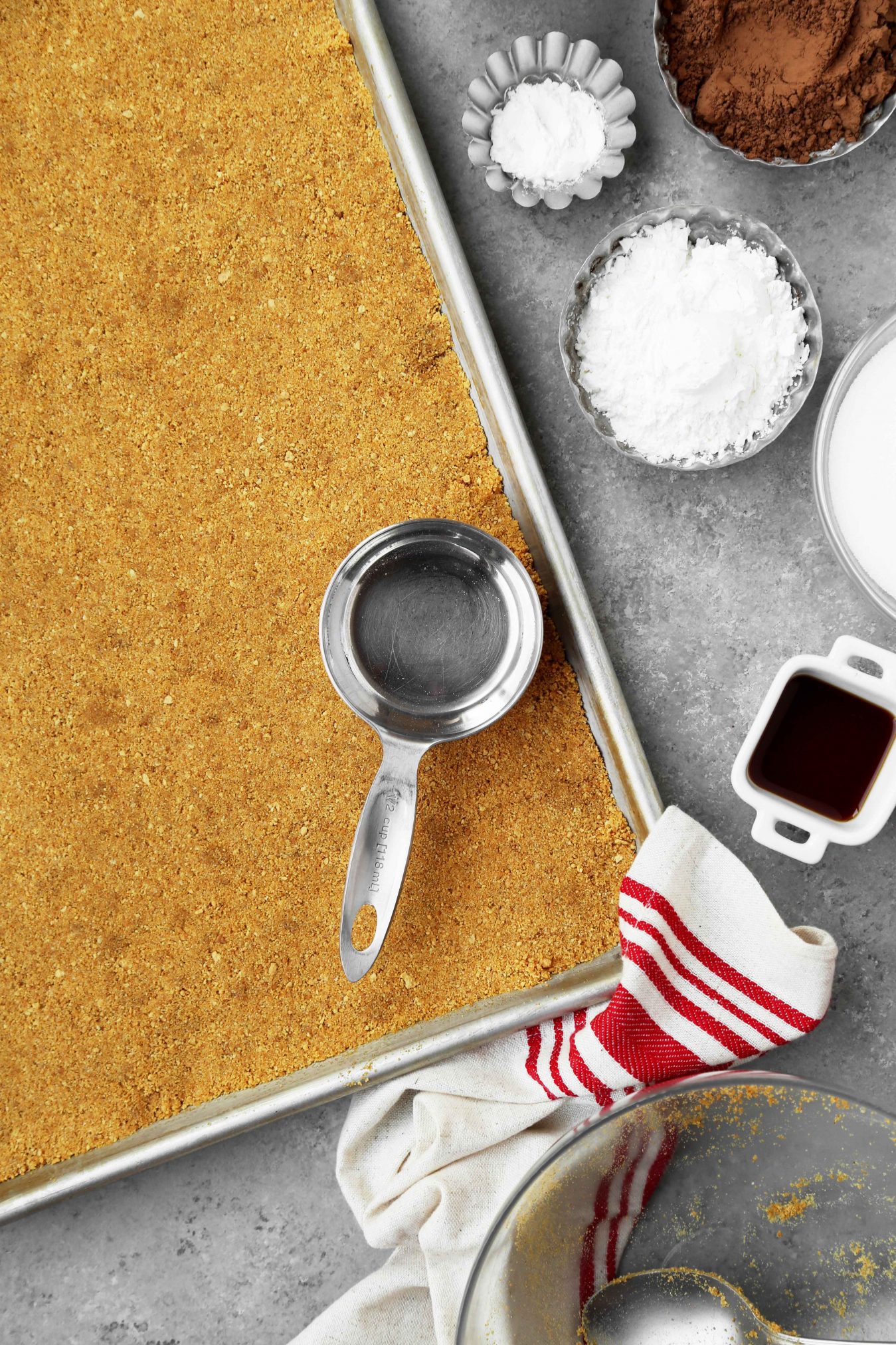 Bake the crust in a preheated 350 degree oven until lightly golden brown around the edges, about 10 to 12 minutes. Remove and let cool completely. The filling is basically chocolate pudding. So to make it, in a large saucepan, whisk together the sugar, cocoa powder, salt, cornstarch and milk until well combined. Set over medium-heat and cook, stirring often, until the mixture begins to bubbly and becomes thick, about 3 to 5 minutes. 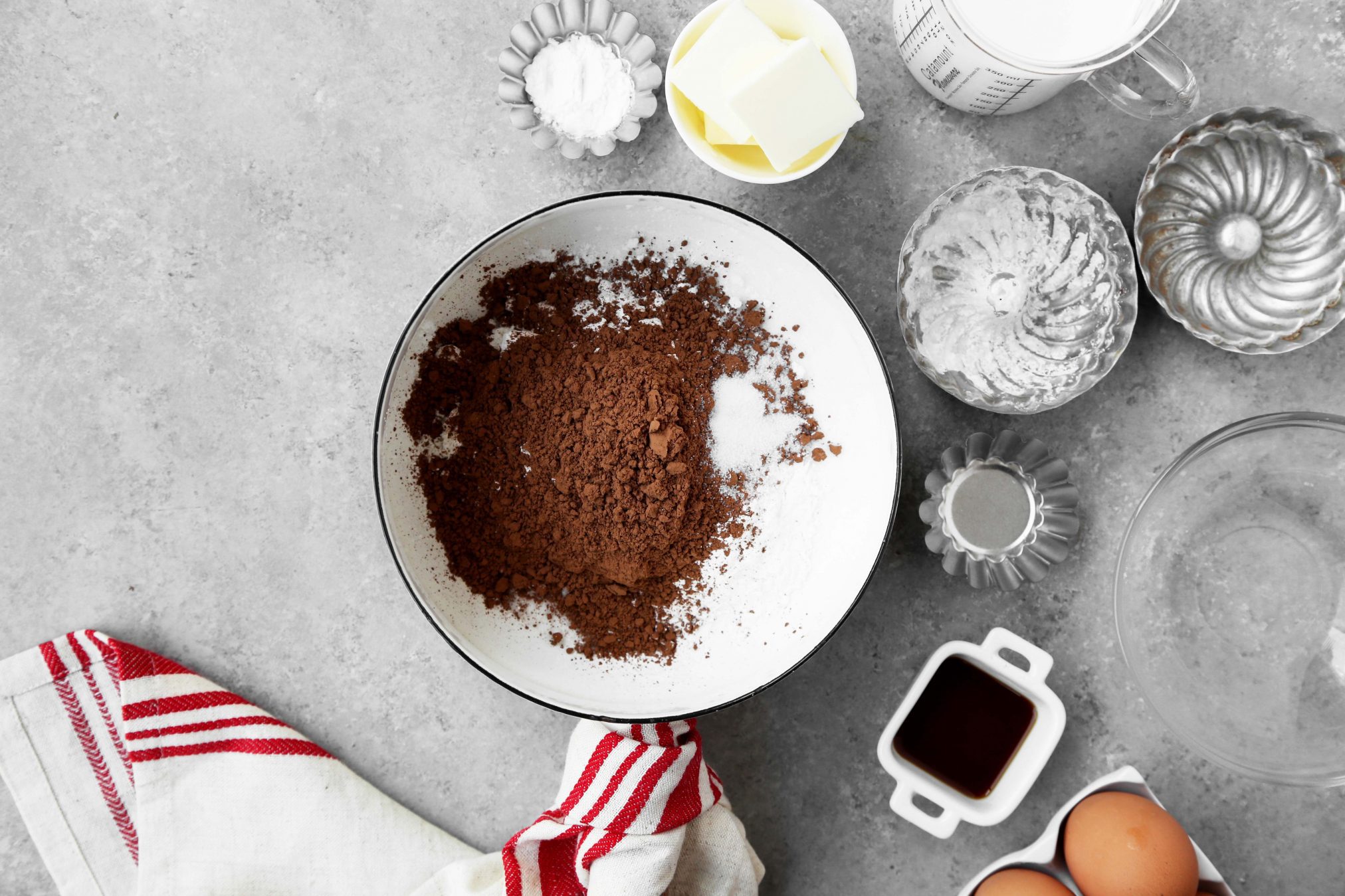 Remove the pudding from the heat and stir in the butter and vanilla extract. Pour onto the cooled crust through a fine mesh strainer to remove any lumps. 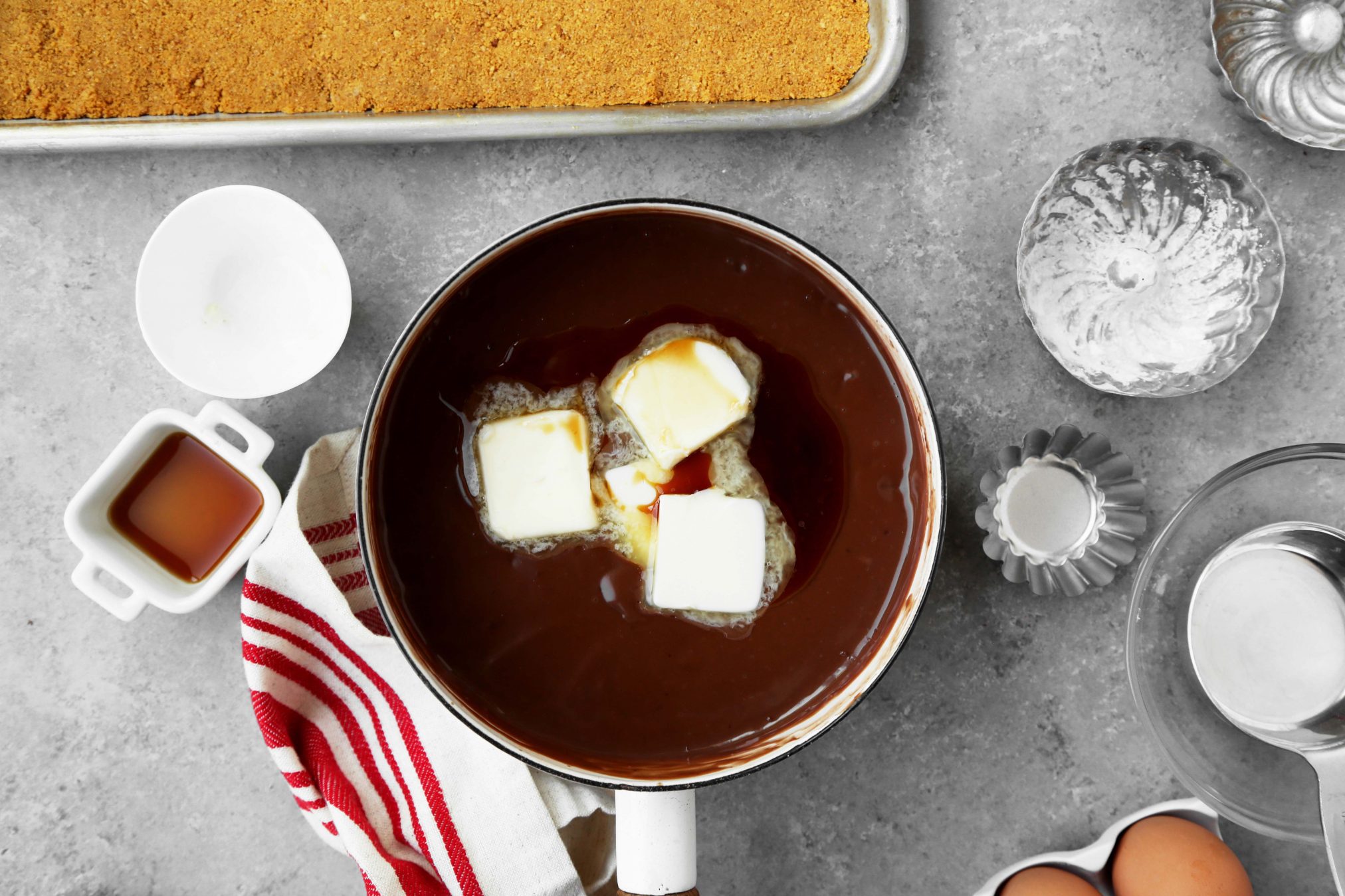 Using rubber or offset spatula, spread the filling evenly over the cooled crust in an even layer. Cover with plastic wrap and chill in the fridge for at least 3 hours or until cooled and set.

**Tip: Cover the pie by placing the plastic wrap directly onto the pudding so that it touches. This will help prevent the pudding from forming a skin or dried out layer! Also, if you’re trying to speed this up, you can pop it in the freezer for about 1 hour.** 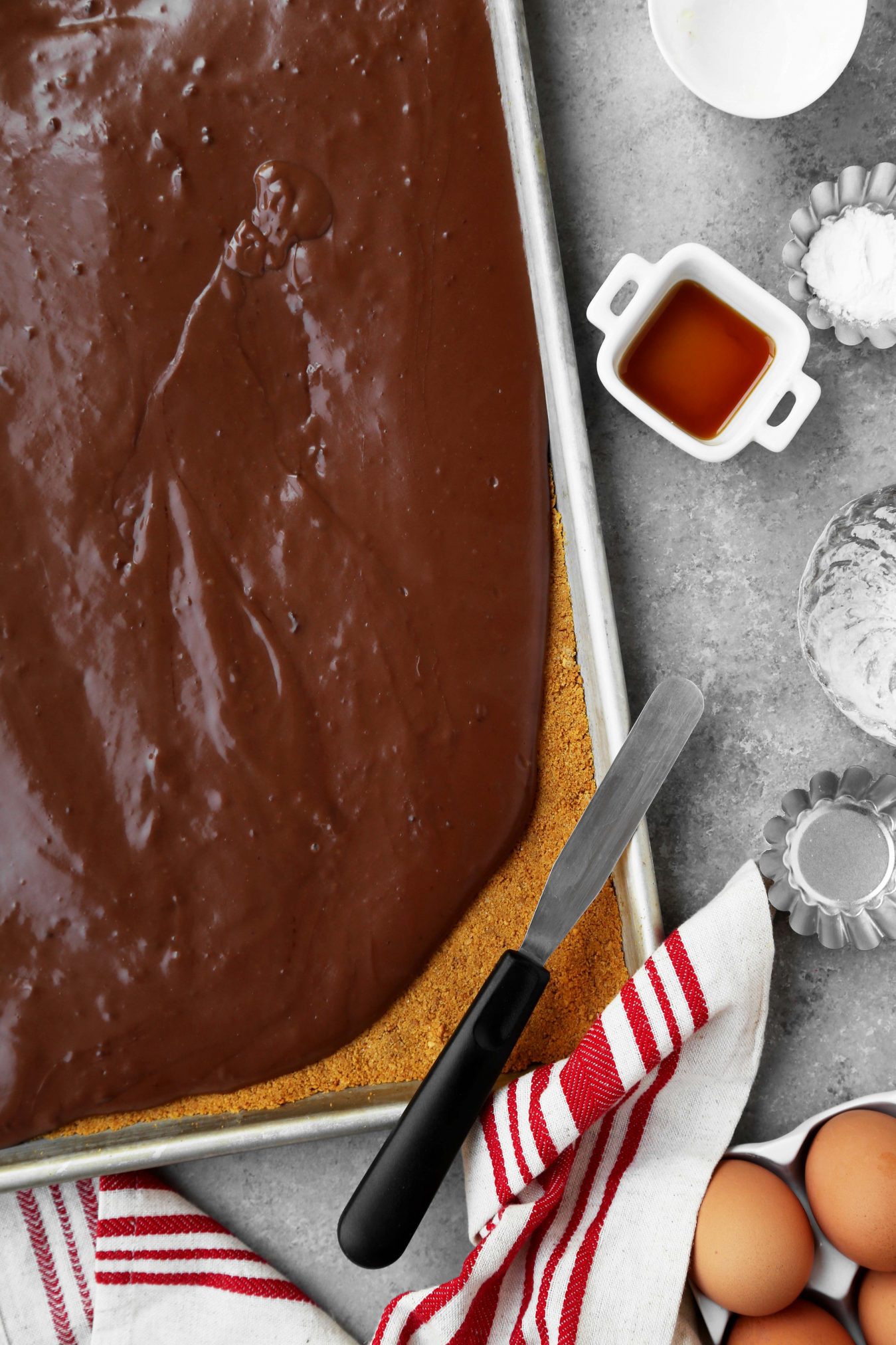 Let’s make the meringue topping for the slab pie. It’s marshmallowy so it’s perfect for our s’mores. In a large heat-proof bowl, stir together the egg whites and granulated sugar. Set the bowl over a pot of simmering water, making sure that the bottom of the bowl does not touch the water. Cook, stirring often, until the sugar has dissolved, about 3 to 5 minutes. 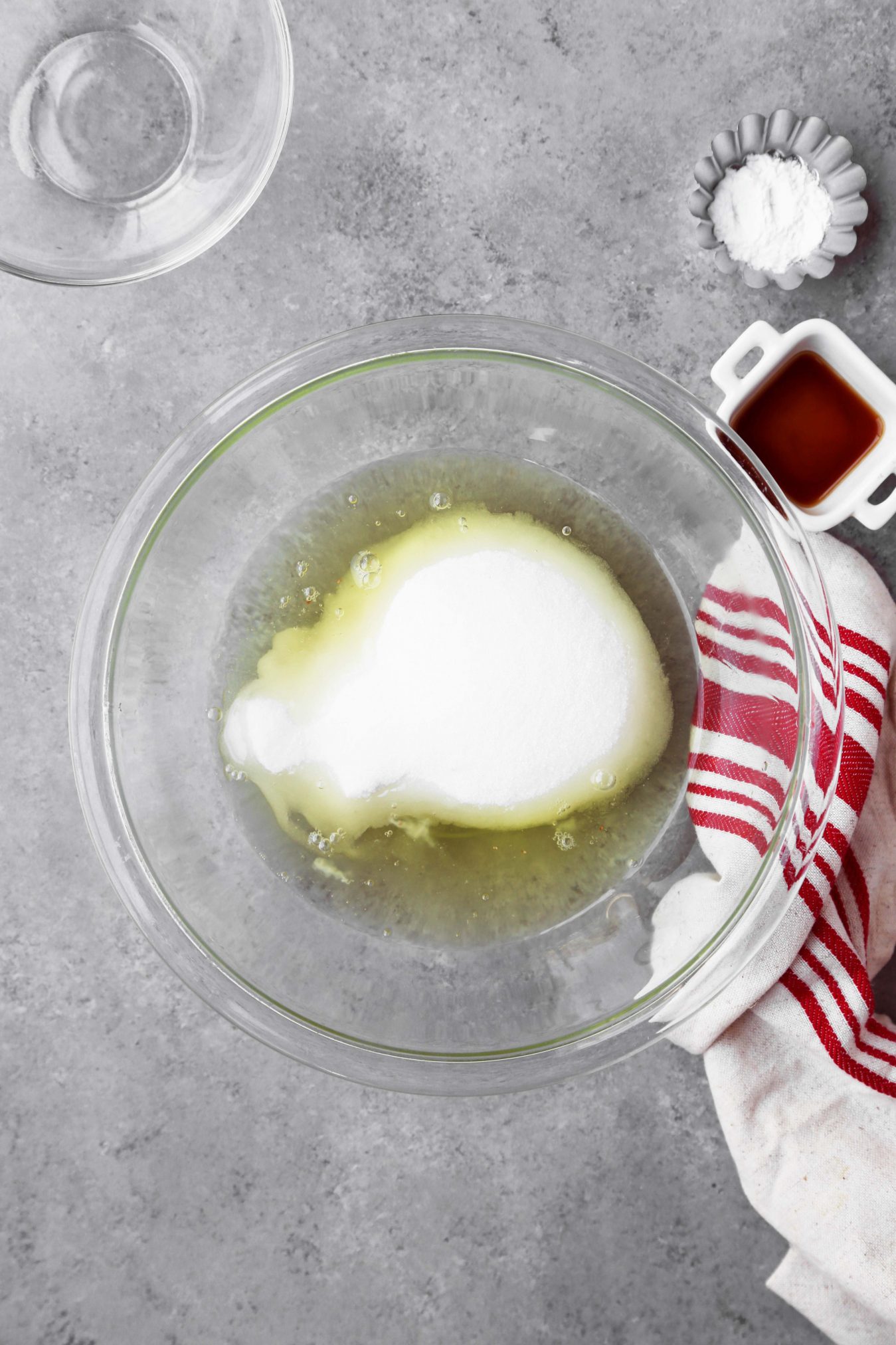 Once the sugar has dissolved, transfer the mixture to a bowl of a stand mixer and add in the cream of tarter and vanilla extract. Beat on medium speed with the whisk attachment until firm. Increase the speed to high and beat until glossy and stiff peaks form, about 5 to 8 minutes. 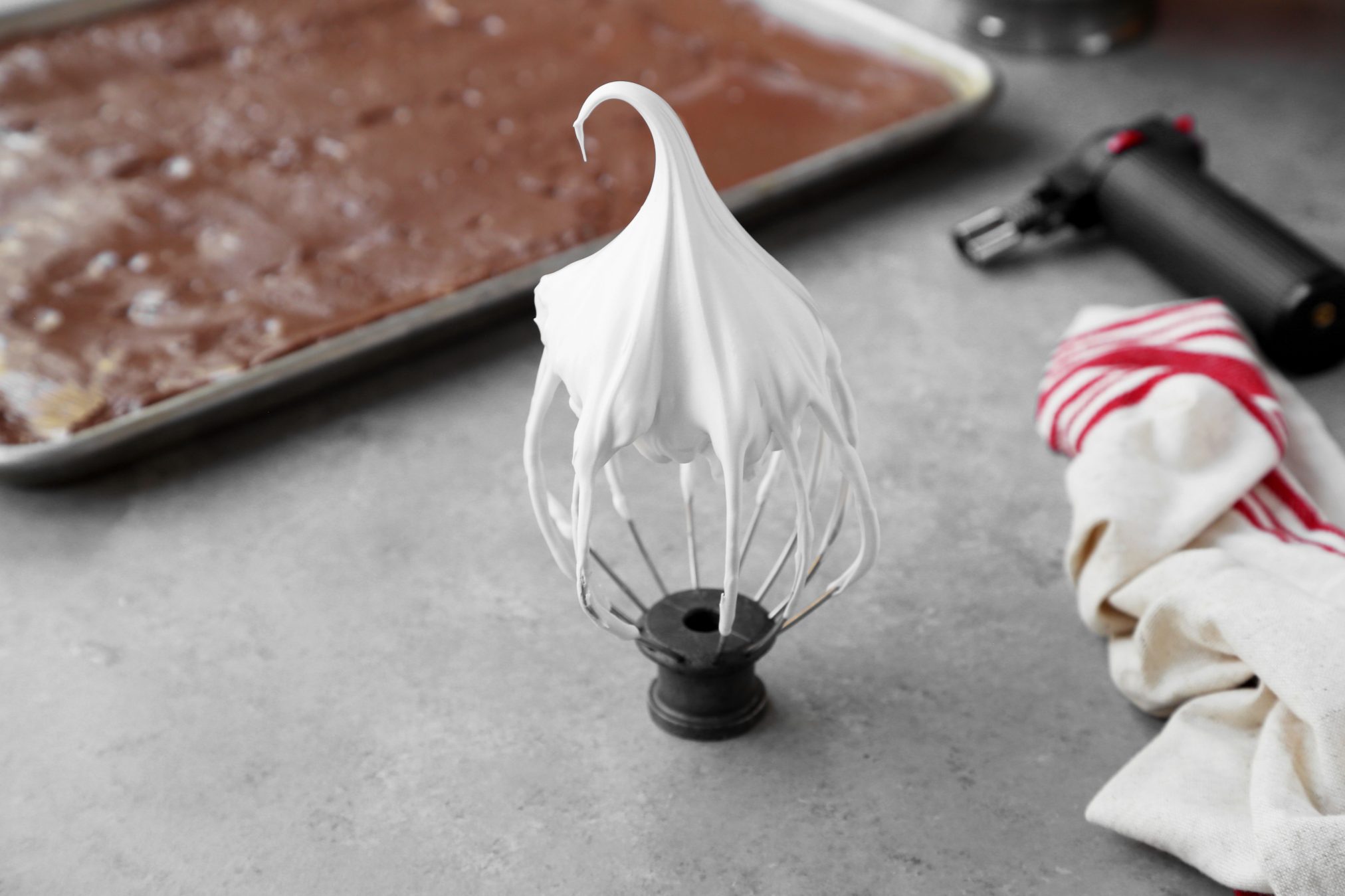 Spoon the mixture over the top of the chilled pie and then using a small offset spatula, spread the meringue evenly over the top, covering the pie completely. Create peaks by swirling the spatula around and lifting it up. Using a kitchen blowtorch, brown the meringue. 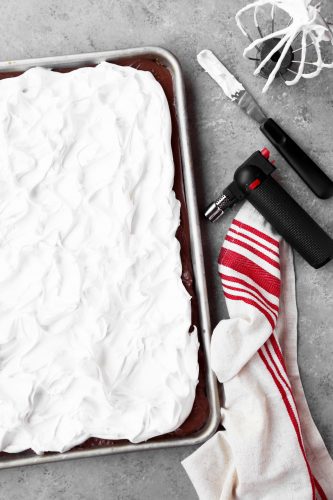 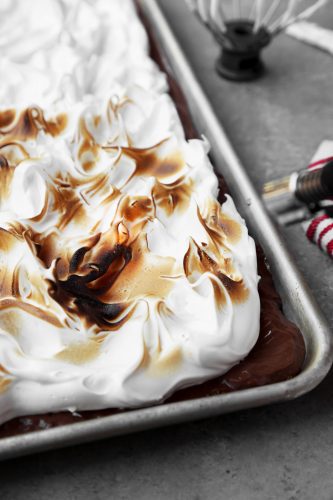 **Tip: If you don’t have a kitchen torch, you can just pop the pan under a preheated broiler for about 1 minute. Keep a close eye on it though because you don’t want the meringue to burn.** 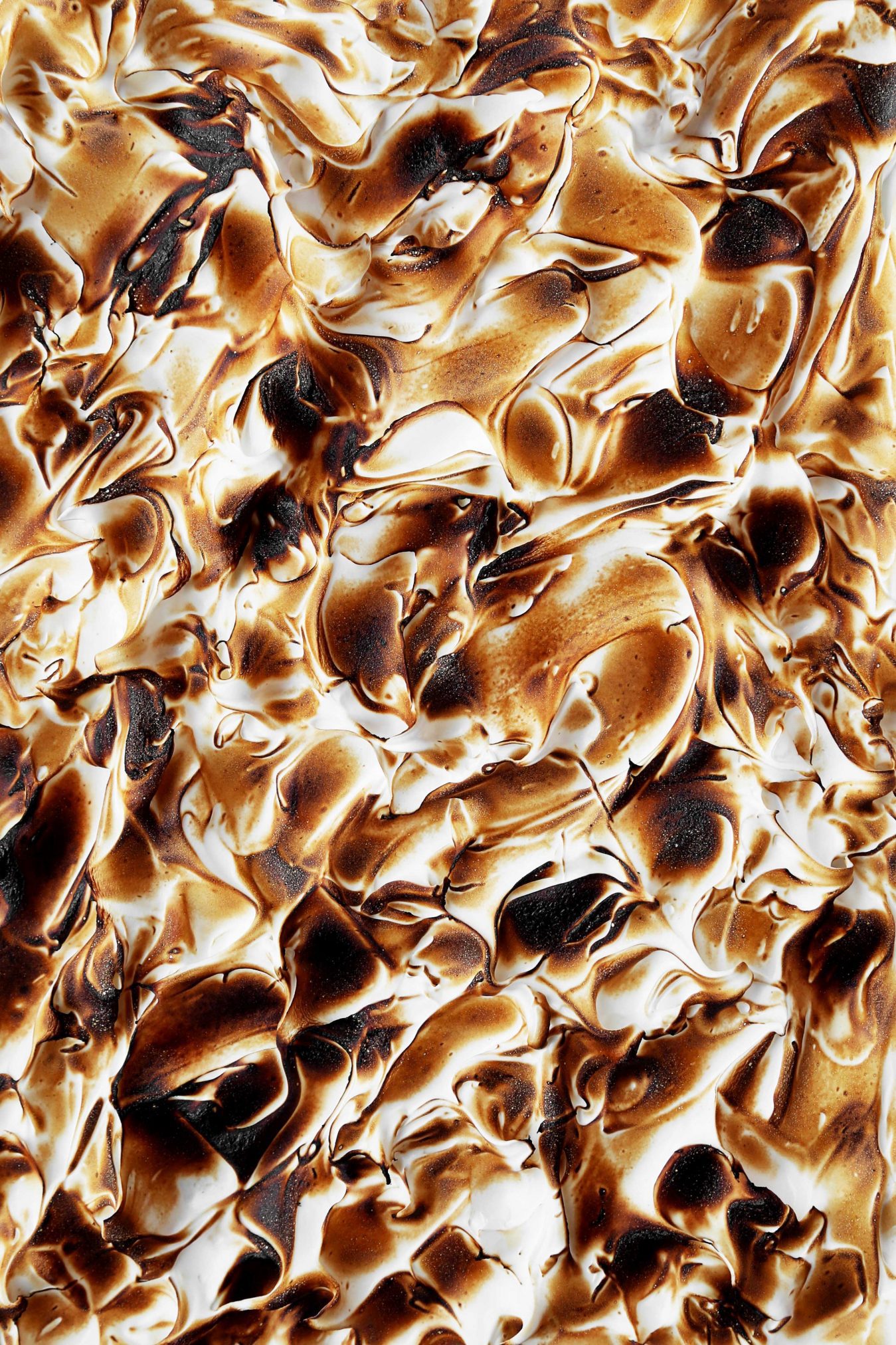 This pie is best when eaten the day you torch the meringue. So I recommend making the crust and filling in advance if need be, and then just make the meringue and torch it right before you plan on serving it. 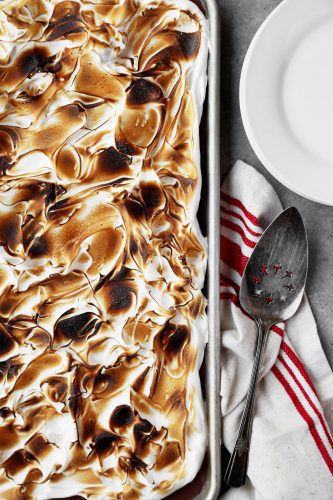 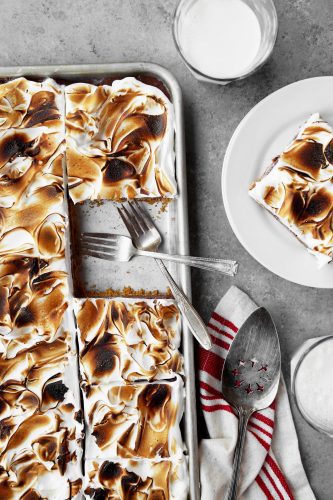 If you do have leftovers, which you just might because let’s be honest this is a HUGE amount of s’mores pie, then you can keep it in the fridge for up to 2 days. The meringue won’t be as fresh, but it definitely won’t be the worst thing in the world. 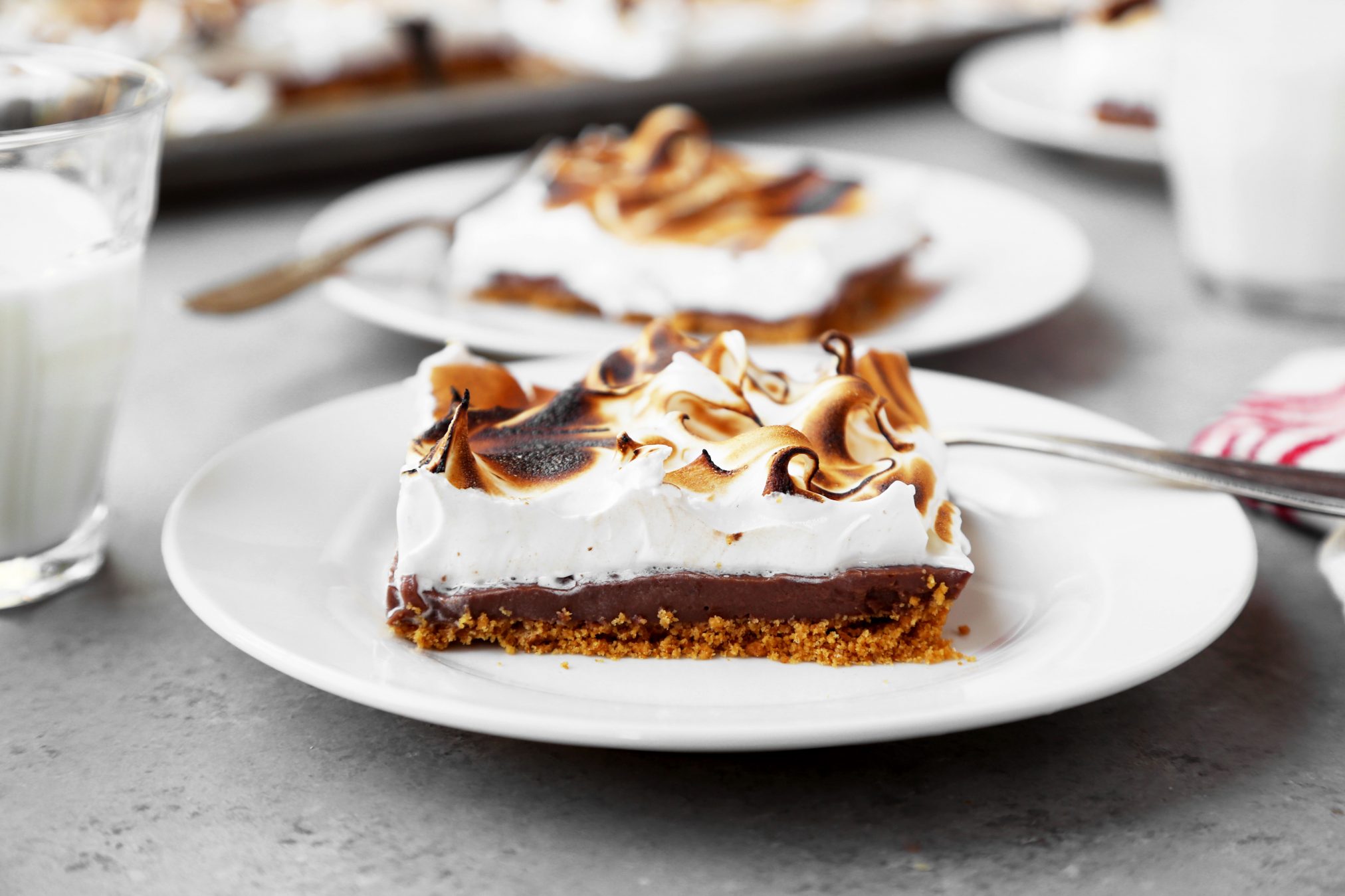 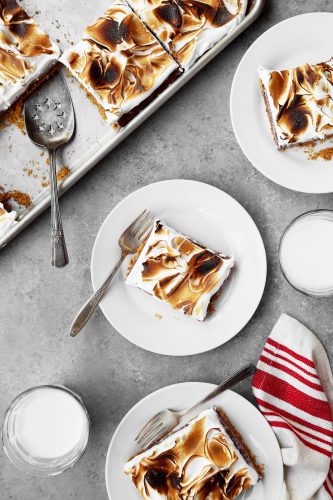 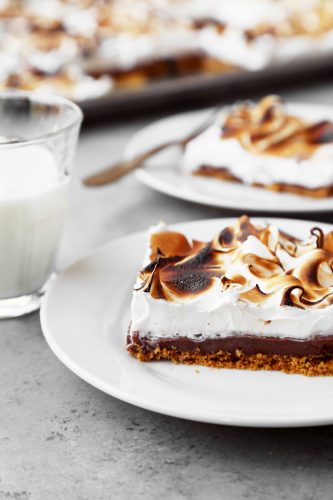 This is THE pie to make this summer, especially if you have to feed a crowd. I’m all about making s’mores but sometimes it’s a lot when you have a lot of people to worry about toasting marshmallows for. This eliminates all that hassle because you can just make one big tray and then just cut and serve. Easy peasy. 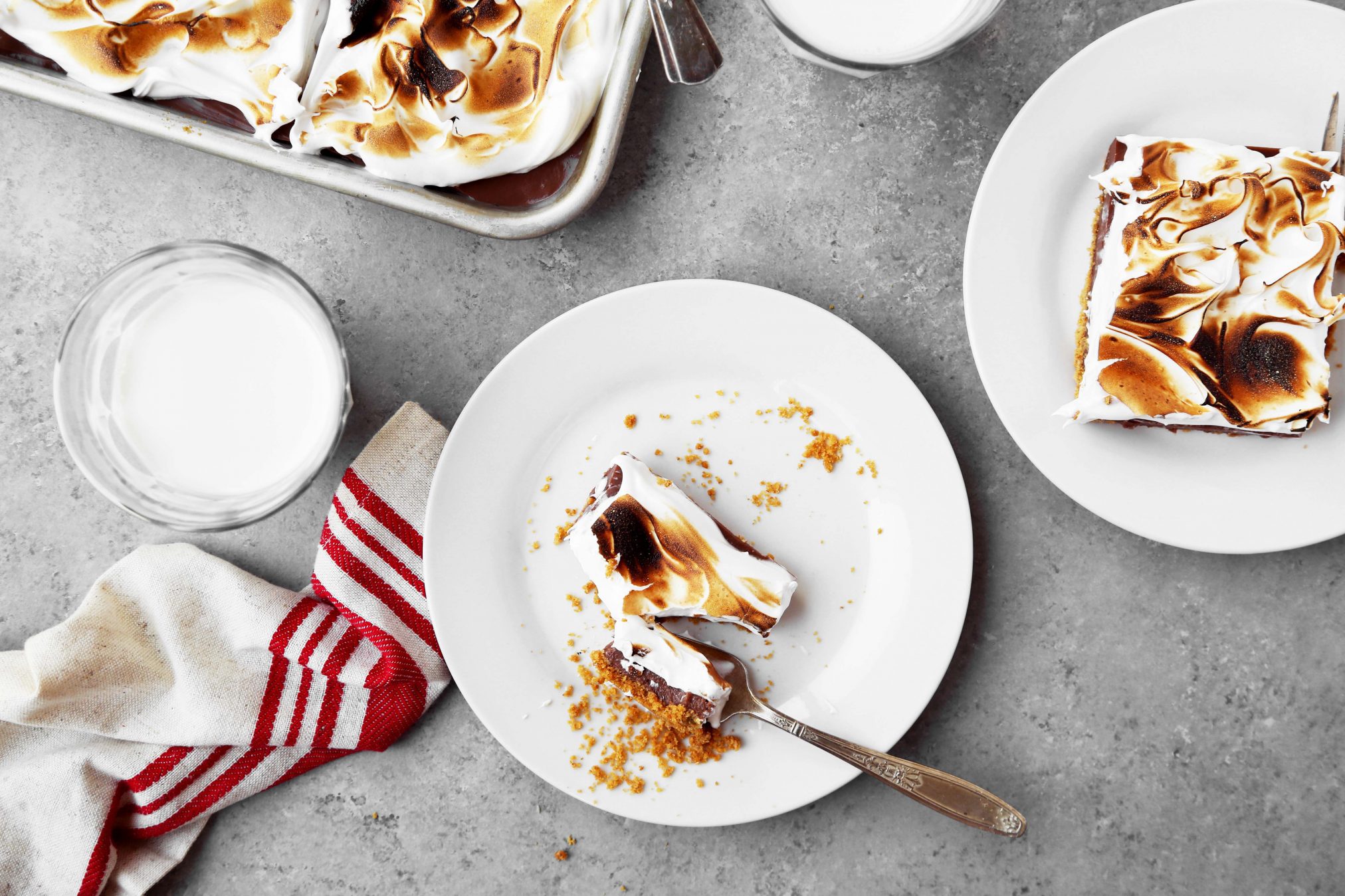 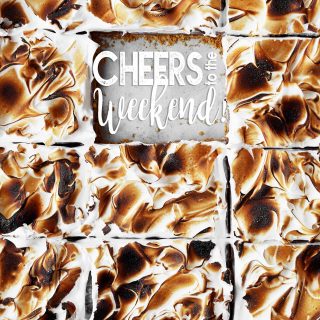