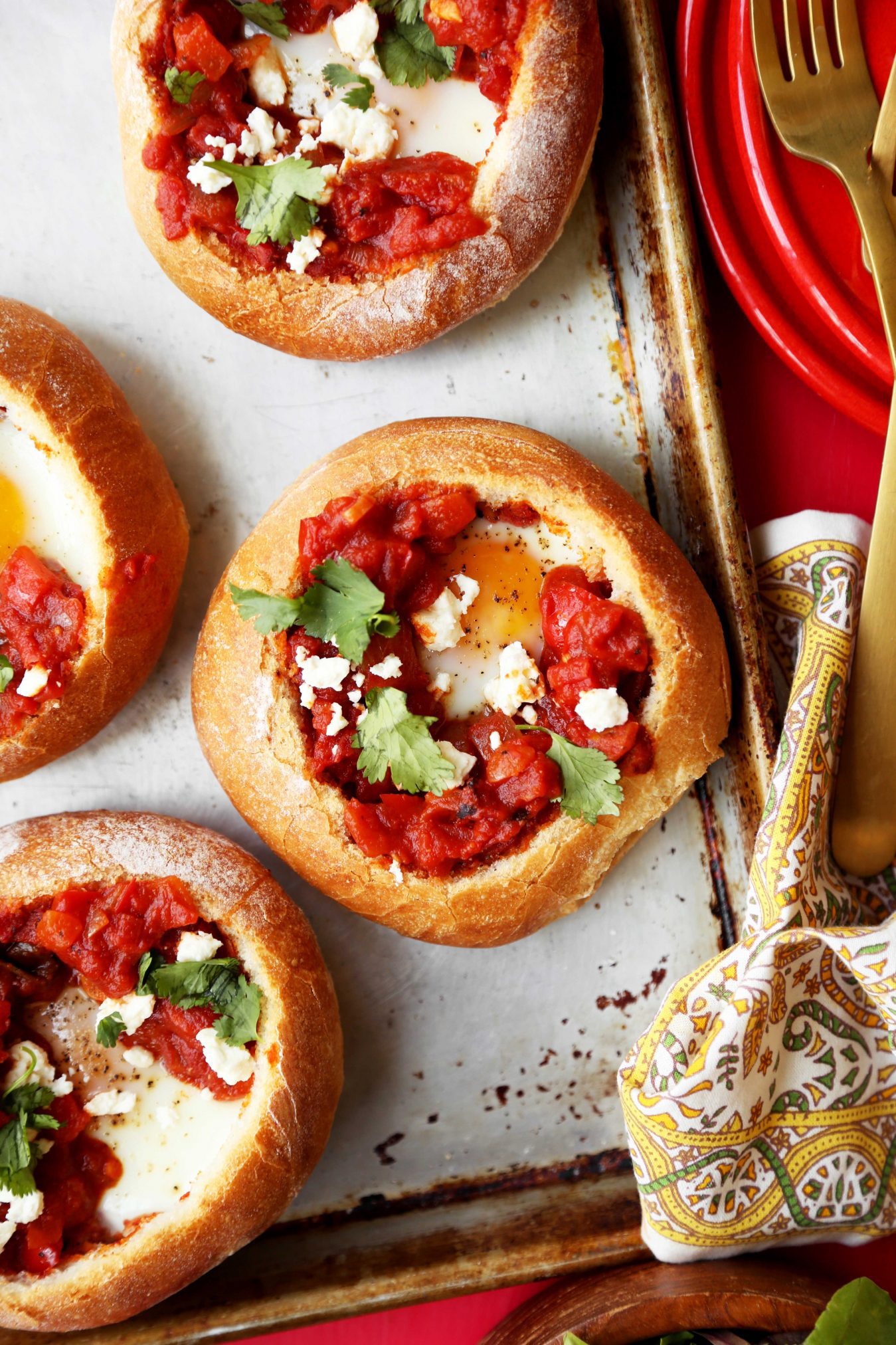 I just recently got into making (and eating) shakshuka. I’ve been seeing it all over the internets and social medias for a while now, and definitely all of last year, and yet I never tried it because I’m the type of person that goes against the things that seem like they’re being pushed down my throat. So out of my stubborn principle I refused to make it. Then I had to shoot a shakshuka for a cookbook and so I was forced to make it and I ate some, and I have to tell you that my eyes were opened for the first time. I’m the first one to admit when I’m wrong and I was most definitely wrong about this dish. Eggs cooked in a spicy tomato sauce and then topped with crumbled feta and cilantro and served with crusty bread or pita for dipping and mopping up the sauce and yolks. It’s unbelievable. So now that I’m hooked, I of course had to turn it on it’s head, and so now I present to you this magical mash-up of Shakshuka Bread Bowls. It’s like a portable version of a popular dish. If you haven’t made it before, I have to tell you that it’s so simple. It’s vegetarian, but packed with so much flavor. You won’t regret making it. Trust me. 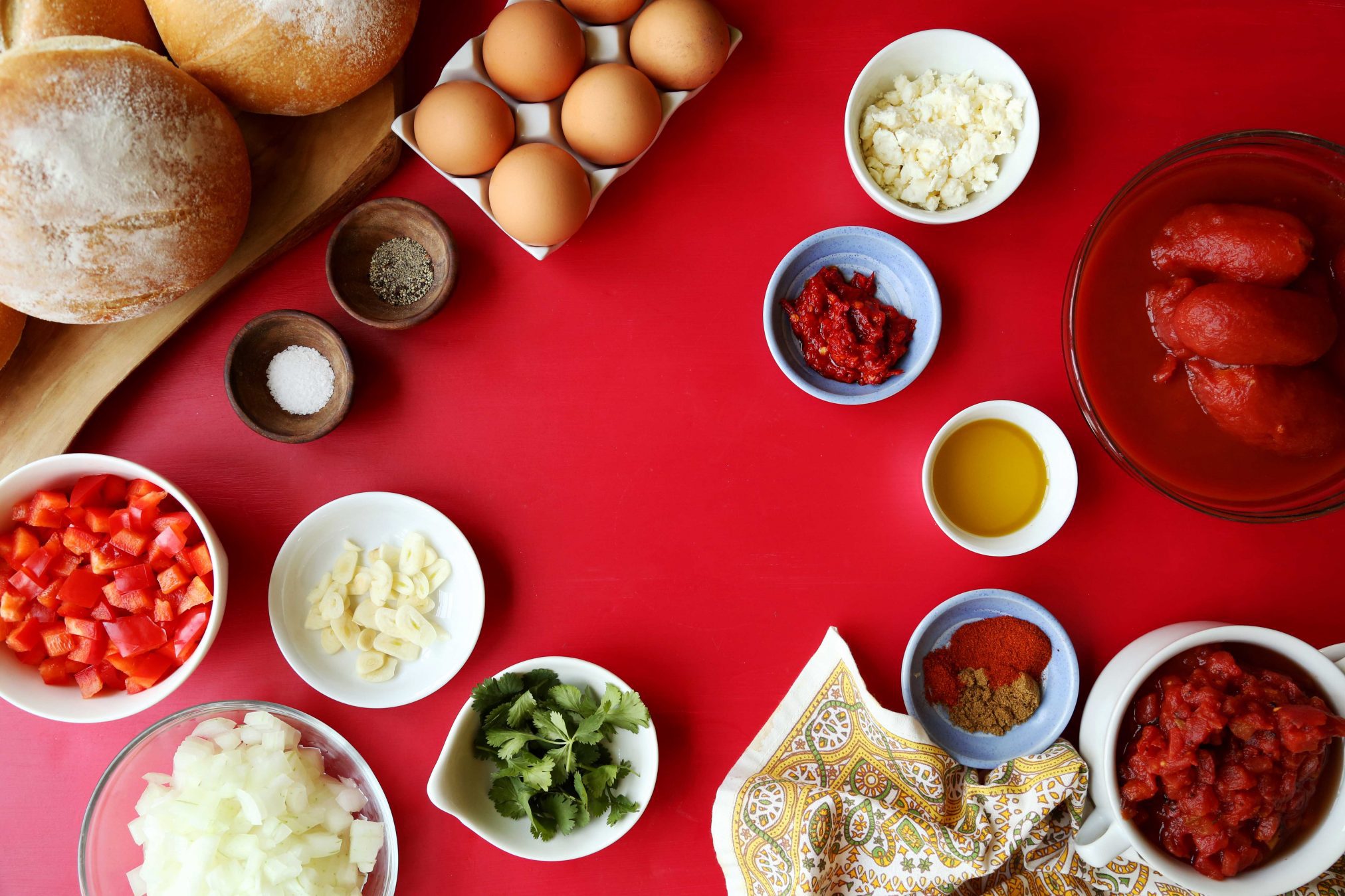 Let’s start by sautéing the onion and garlic with some olive oil, in a large pot or skillet with high sides. Cook until they’re soft and just starting to brown, about 3 minutes.

**Note: Traditionally shakshuka is made in a large heavy cast iron skillet. Large enough to bake the eggs in the sauce, but since we’re going to transfer the sauce into bread bowls, you don’t really need a cast iron or large skillet. A medium saucepan will work too.** 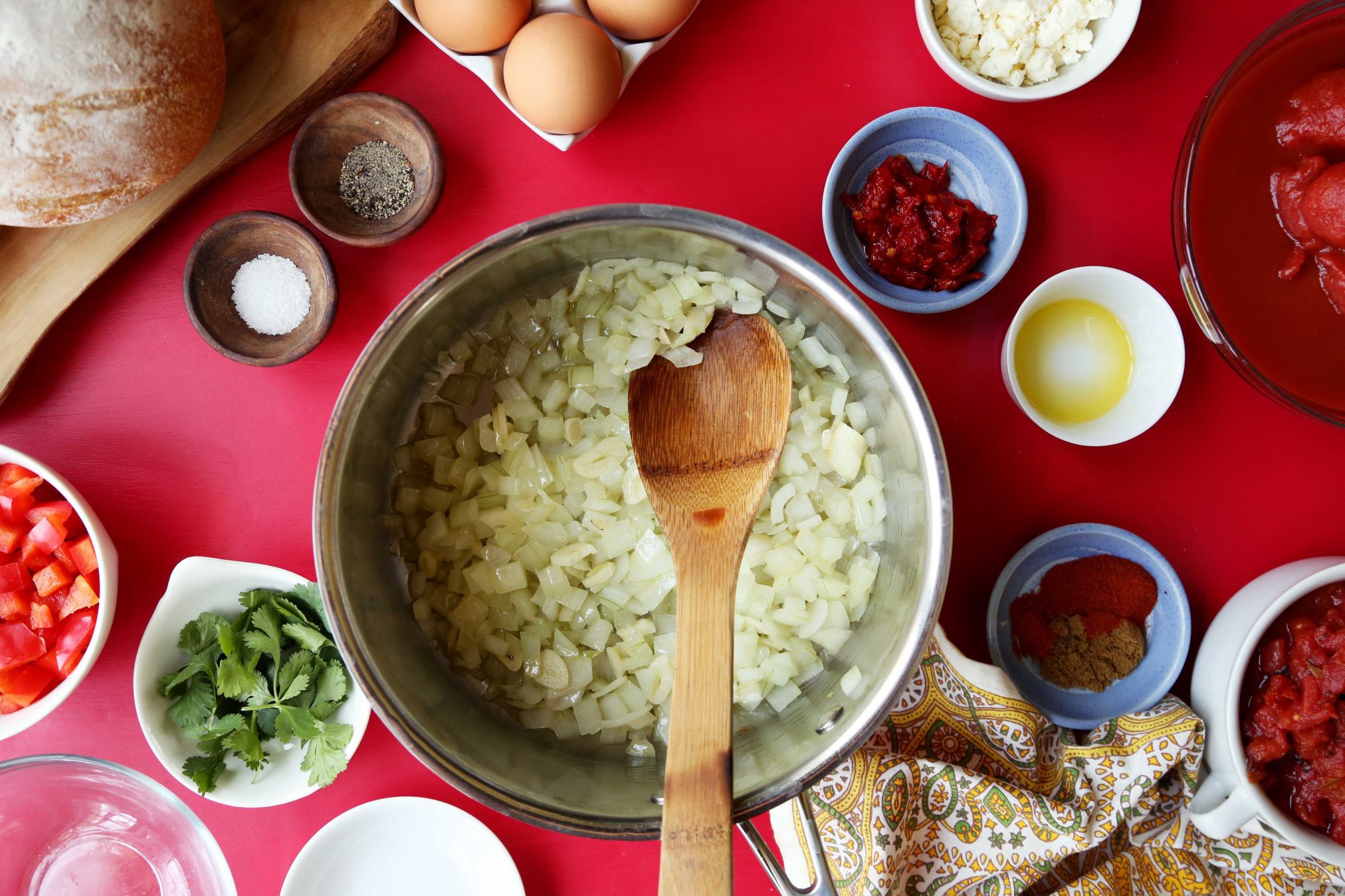 Add in a diced large red bell pepper and continue to cook until the pepper is tender and the onions have caramelized slightly, about 20 minutes. Keep stirring every so often so that it doesn’t burn. 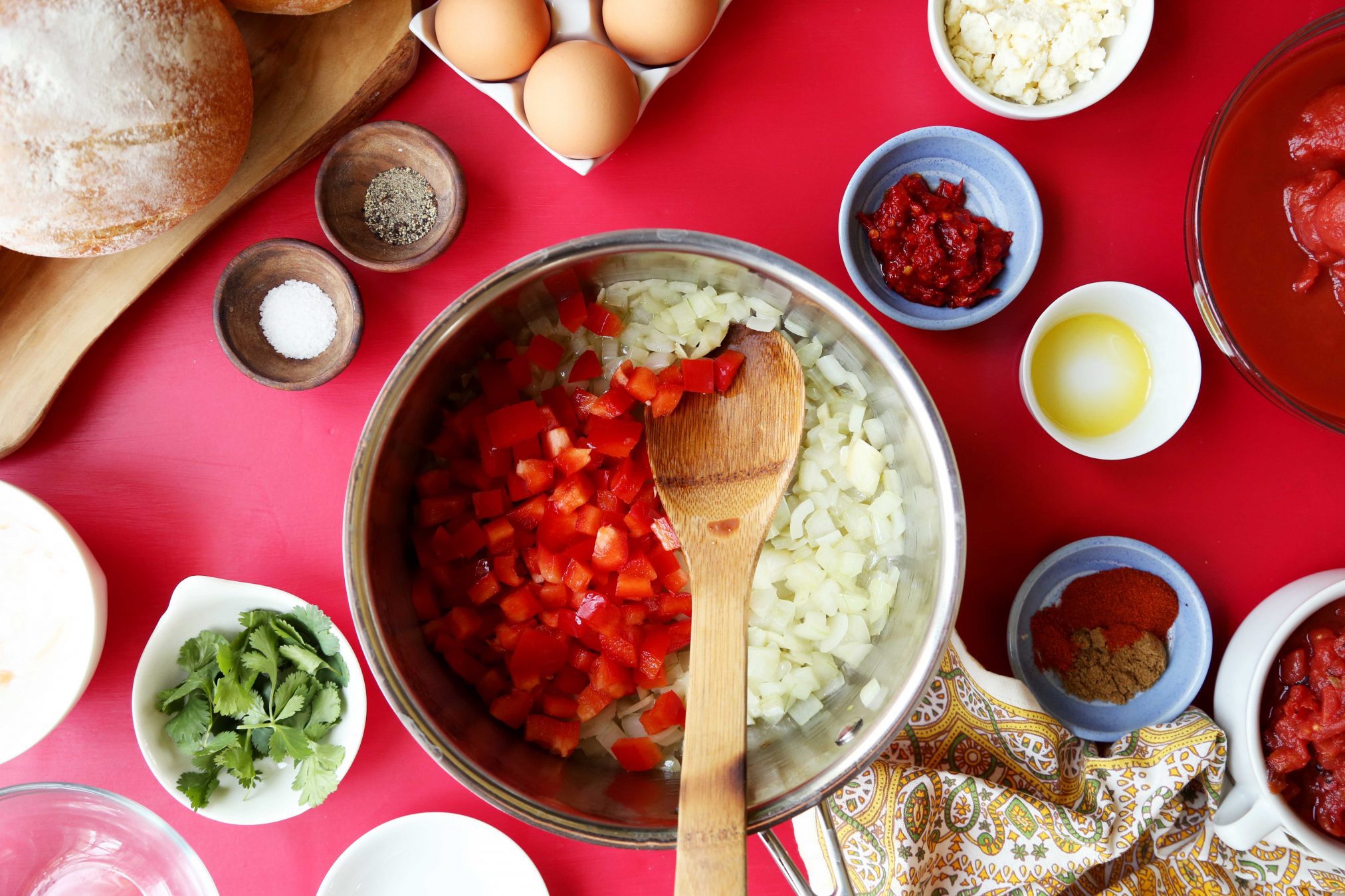 Once softened, stir in a tablespoon of harissa paste, cumin, paprika, and cayenne pepper and cook a minute or two longer to bring out the flavor of the paste and spices. If you can’t find harissa, you can swap it out for tomato paste.

**Note: According to internet research, harissa is a Maghrebi hot chili pepper paste, the main ingredients of which are roasted red peppers, Baklouti pepper, serrano peppers, and other hot chili peppers, spices and herbs such as garlic paste, coriander seed, saffron, rose, or caraway, as well as some vegetable or olive oil for preservation. It is most closely associated with Tunisia, Libya, Algeria, and Morocco.** 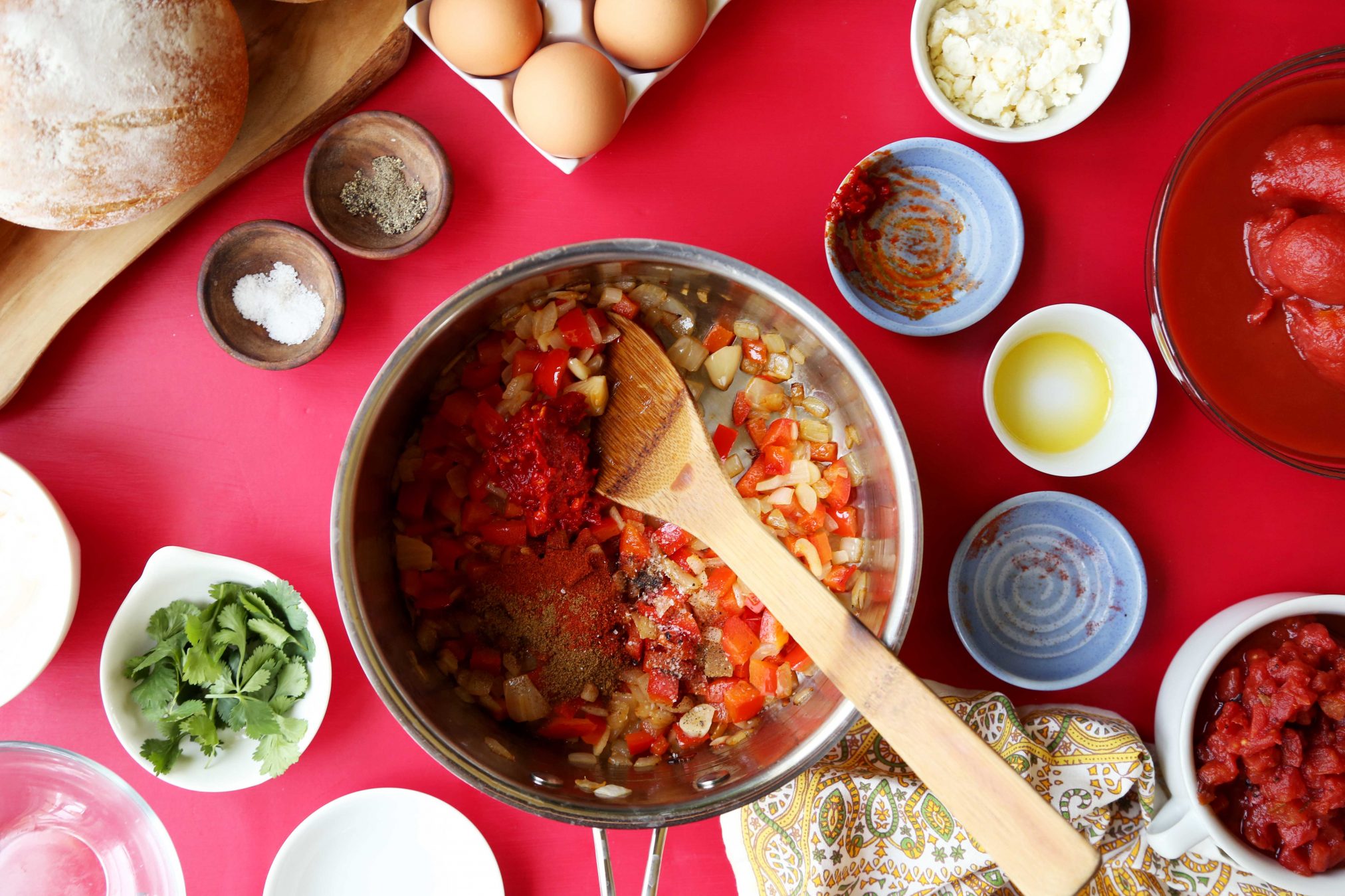 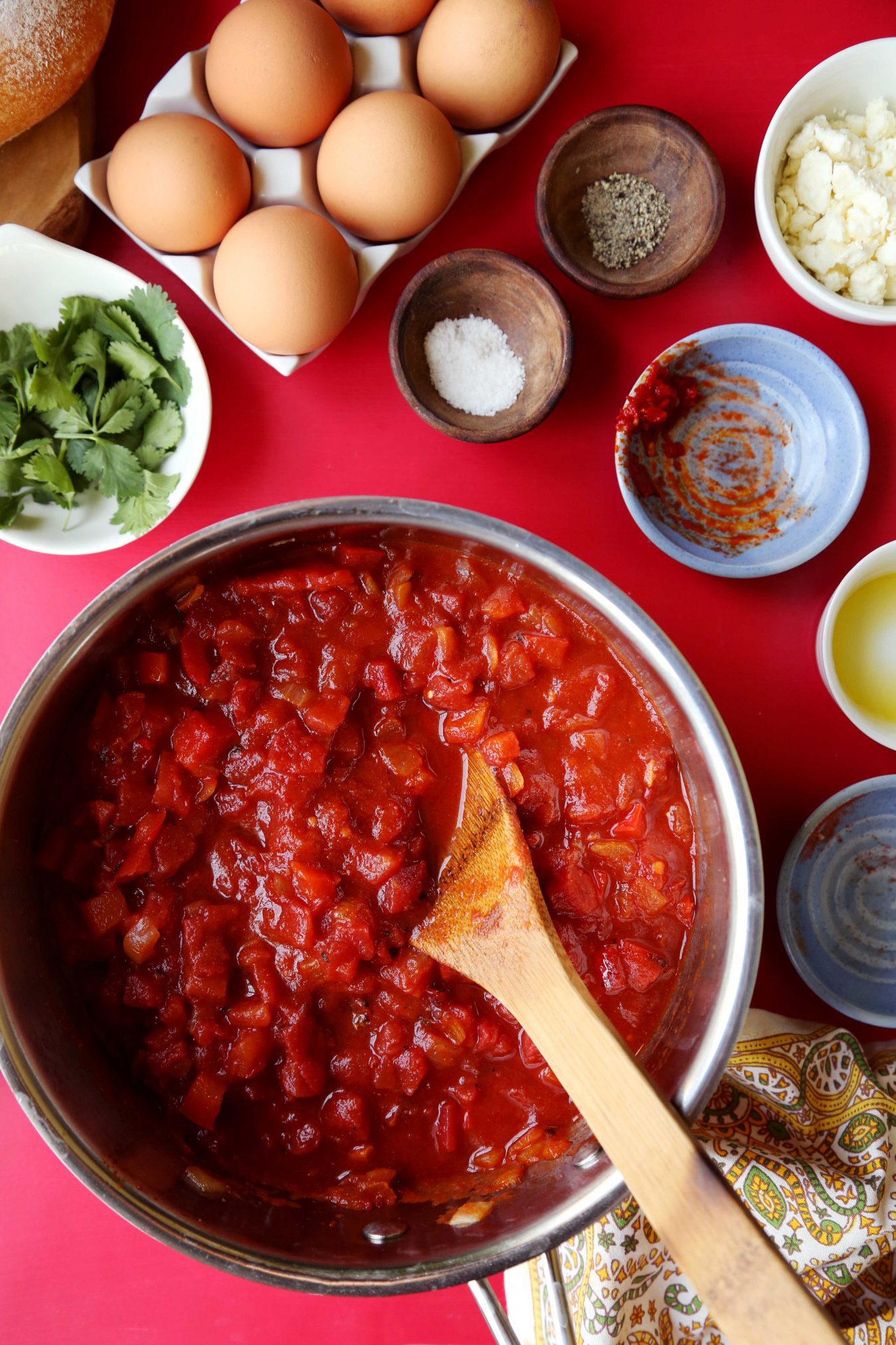 Cut open a lid at the top of each bread roll and then scoop out some of the bread filling in the center to make room for the tomato sauce and eggs. Divide the spicy tomatoes between each bread bowl and make a well in the center of each.

**Tip: Definitely save the bread you scoop out of the center and the tops. You can toast it all on a baking sheet until golden and then pulse into breadcrumbs and use it for another recipe!** 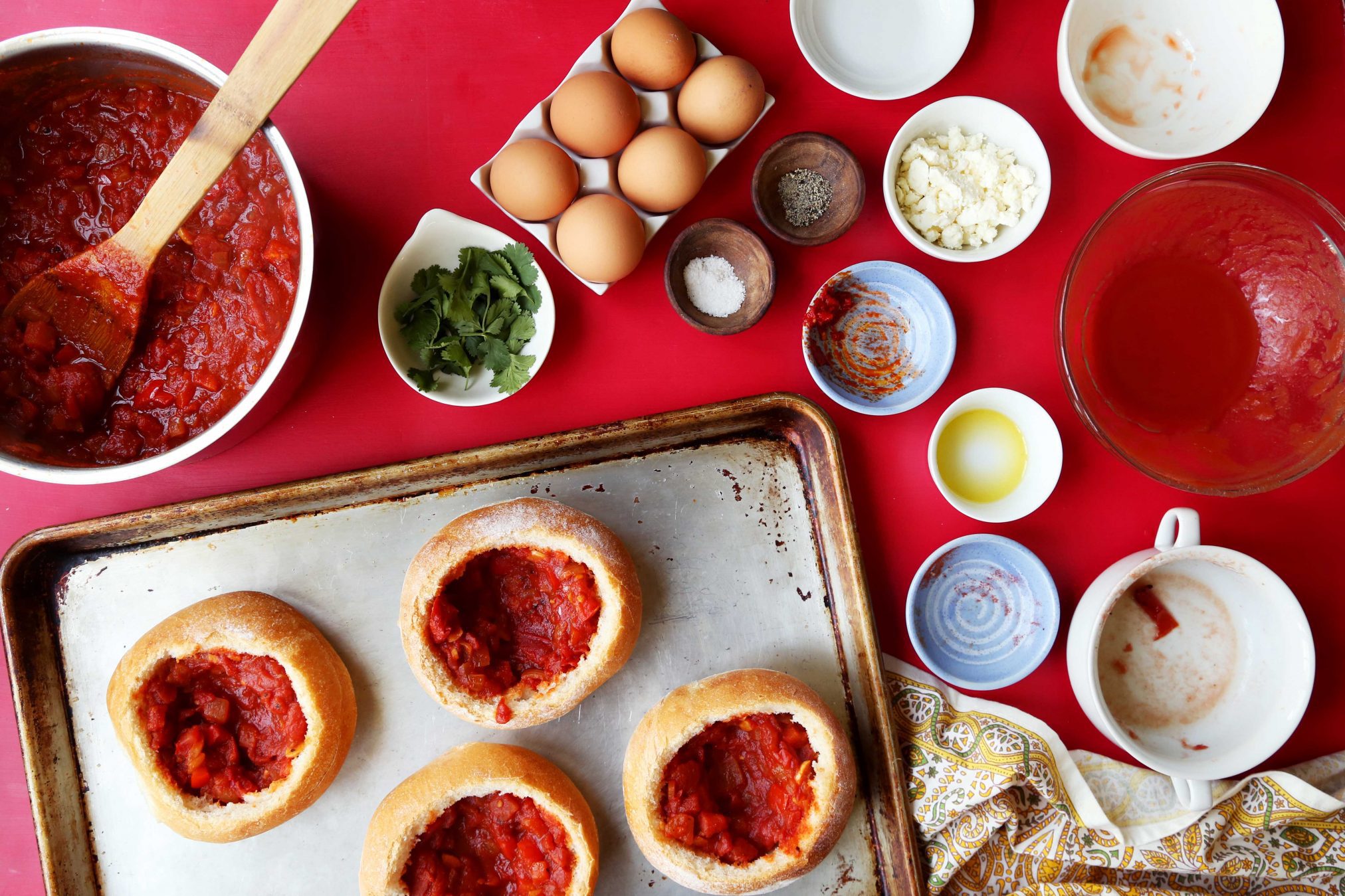 Crack and egg into each bread bowl and then place a few spoonfuls of the tomato sauce around the egg. Sprinkle the top with a bit more salt and pepper. Bake in a preheated 375 degree F oven until the eggs have set, about 10 minutes. 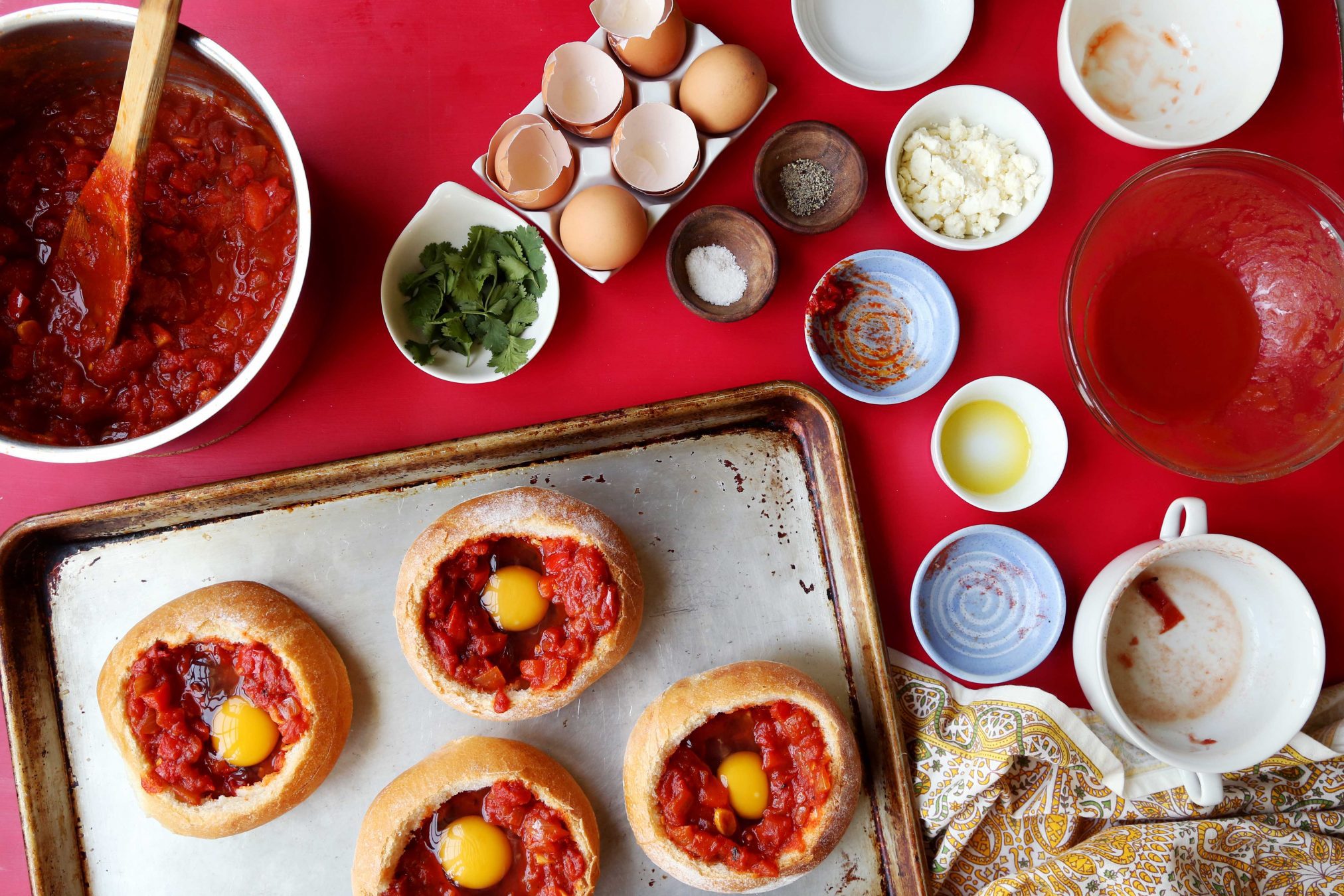 Remove from the oven and sprinkle the tops with crumbled feta and fresh cilantro. You don’t have to chop the cilantro, just tear pieces up with your hands. It’s a rustic look. 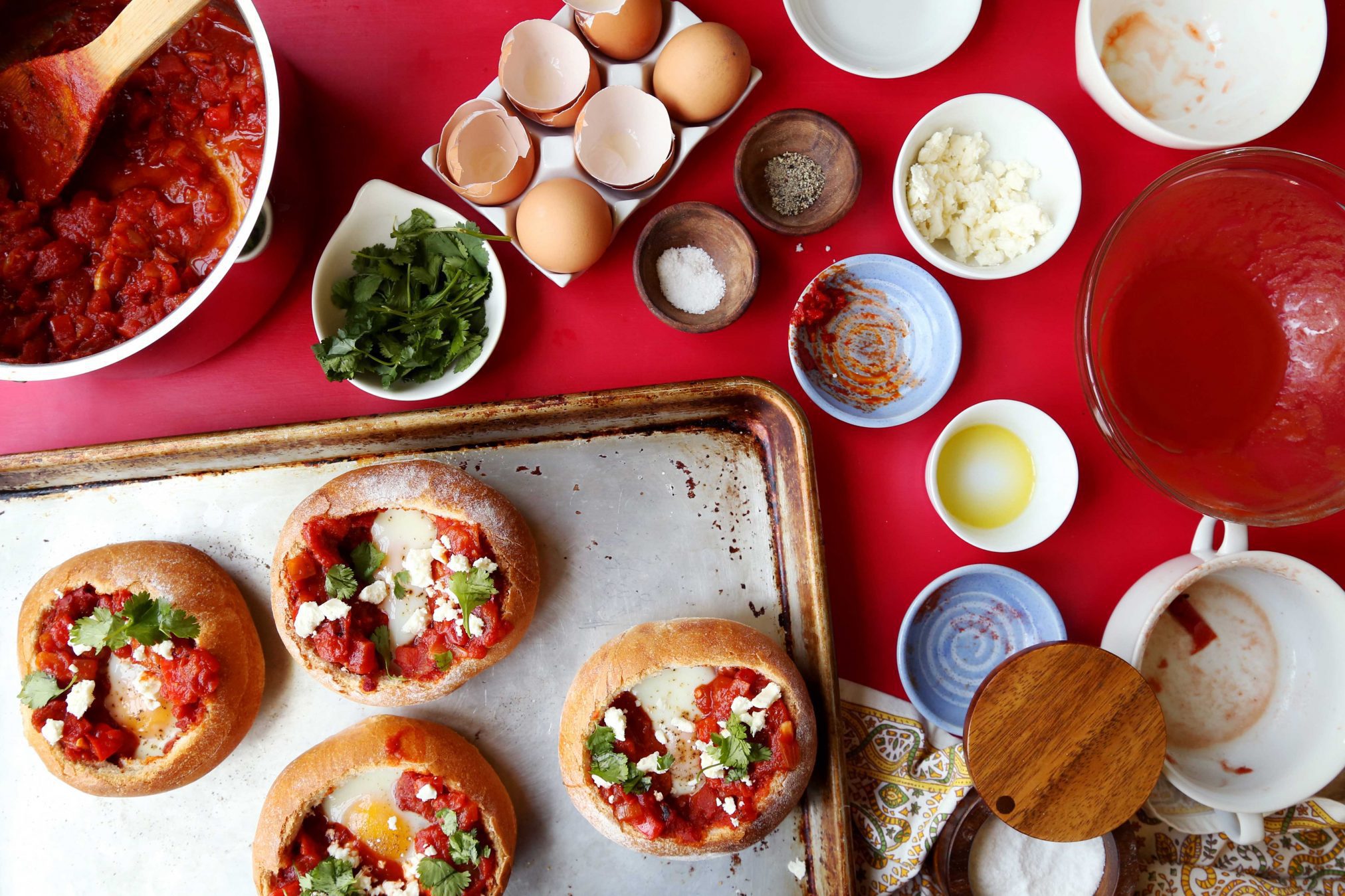 You want to make sure you don’t over cook the eggs because you still want the yolks to be runny, so only bake the bread bowls until the whites have set and the eggs don’t really jiggle when you shake the pan gently. Keep a close eye on it because your bread bowls might be smaller or large or you oven might be hotter or warmer. 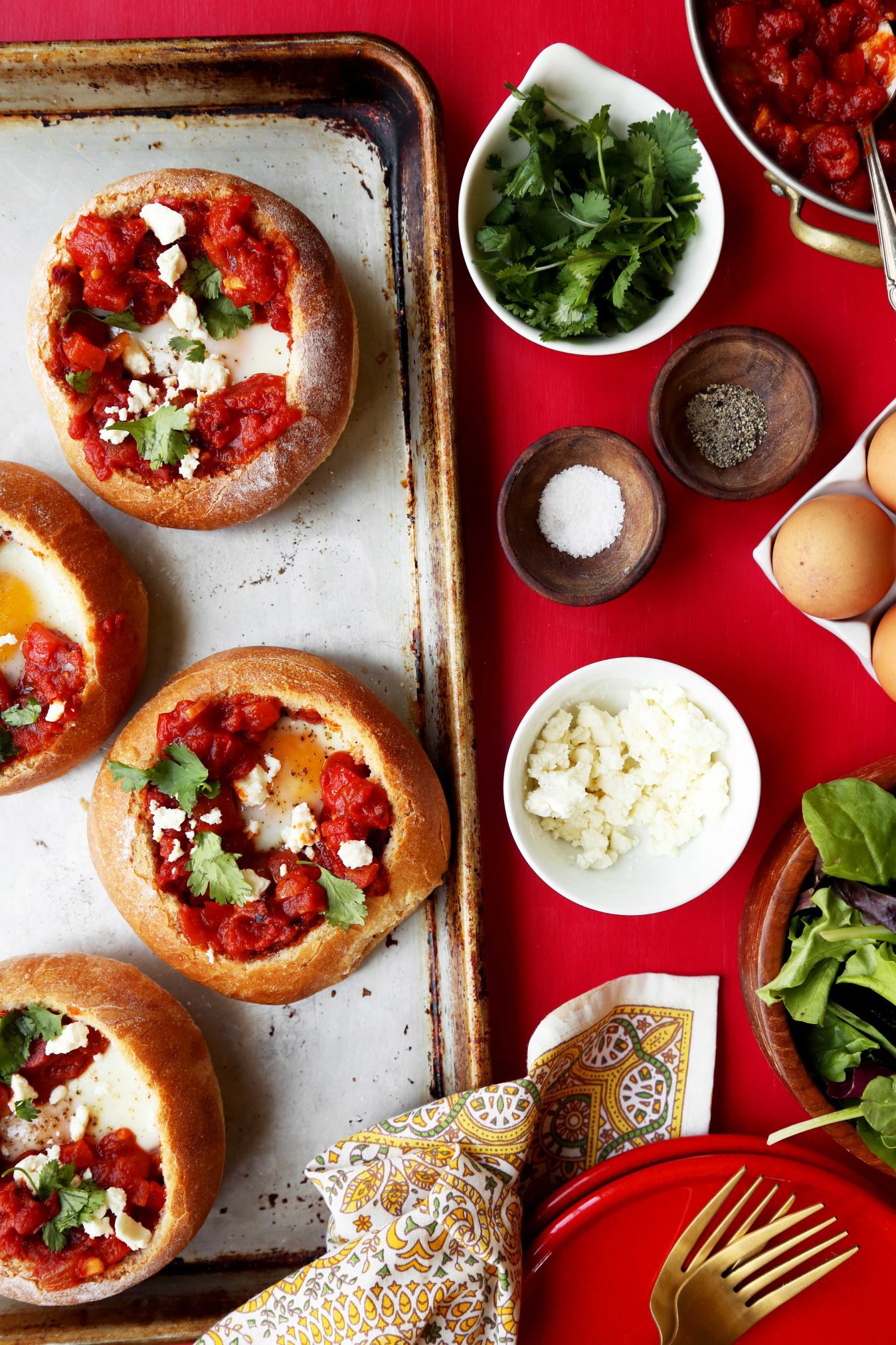 You can drizzle the top of each with a tiny bit of olive oil if you want to give them a little extra flavor boost. A finishing touch if you will. 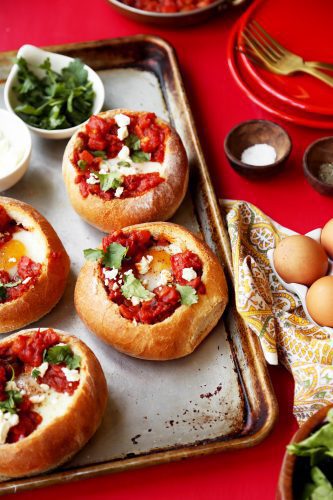 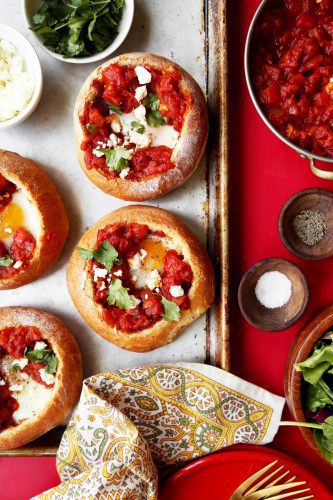 Because the tomato dries out a bit out of the oven, you can spoon a little extra tomato sauce on top of each when they come out of the oven before you sprinkle with feta and cilantro. It’s not necessary though, only if you have some extra sauce. 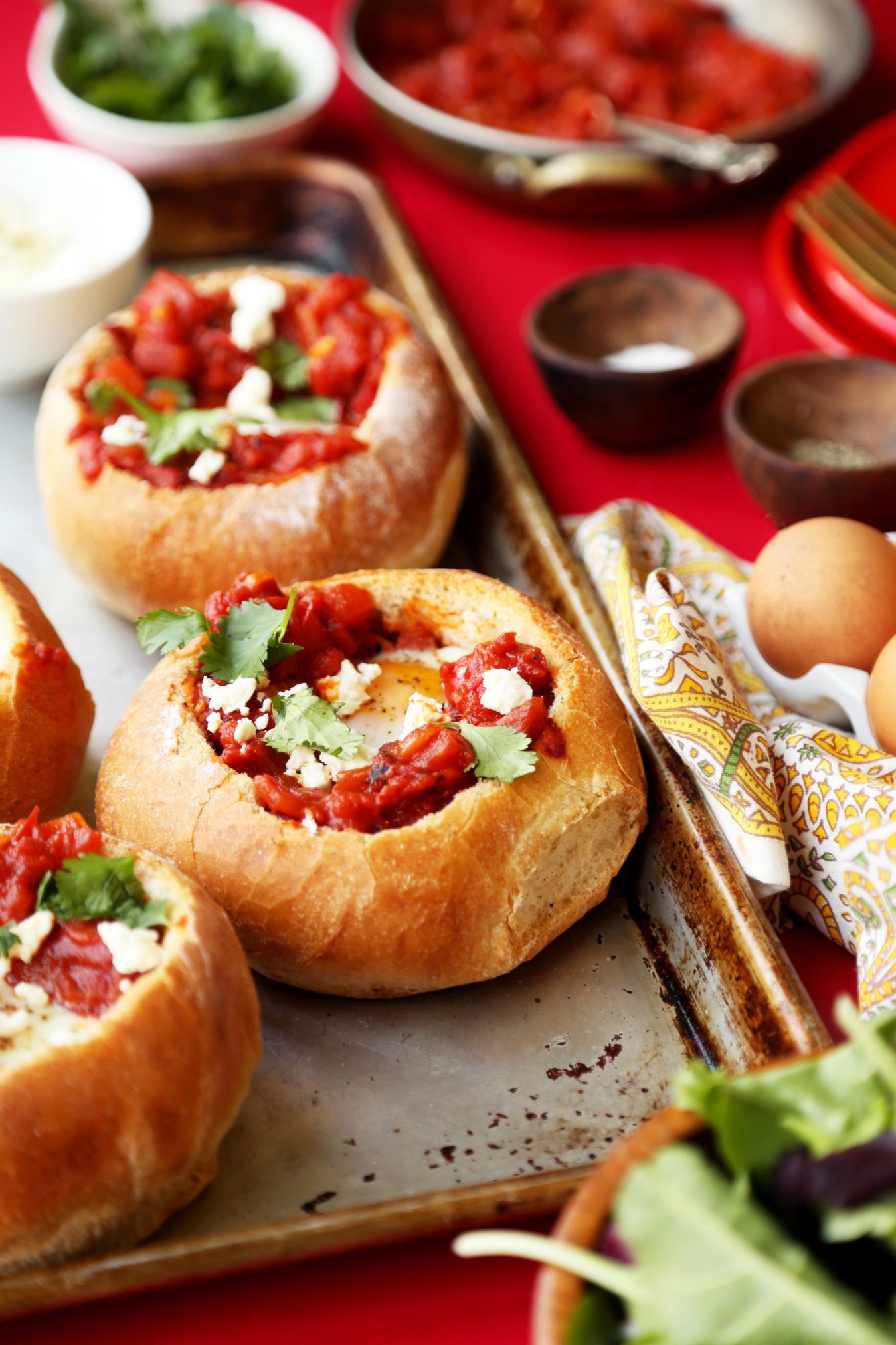 This is a great recipe to keep up your sleeve the next time you’re looking for a fun and interesting breakfast or brunch recipe. It’s a great centerpiece to your spread. A simple green salad on the side or a marinated tomato and cucumber salad would be super refreshing. Breakfast for dinner? Now that’s a great idea we should all get behind. 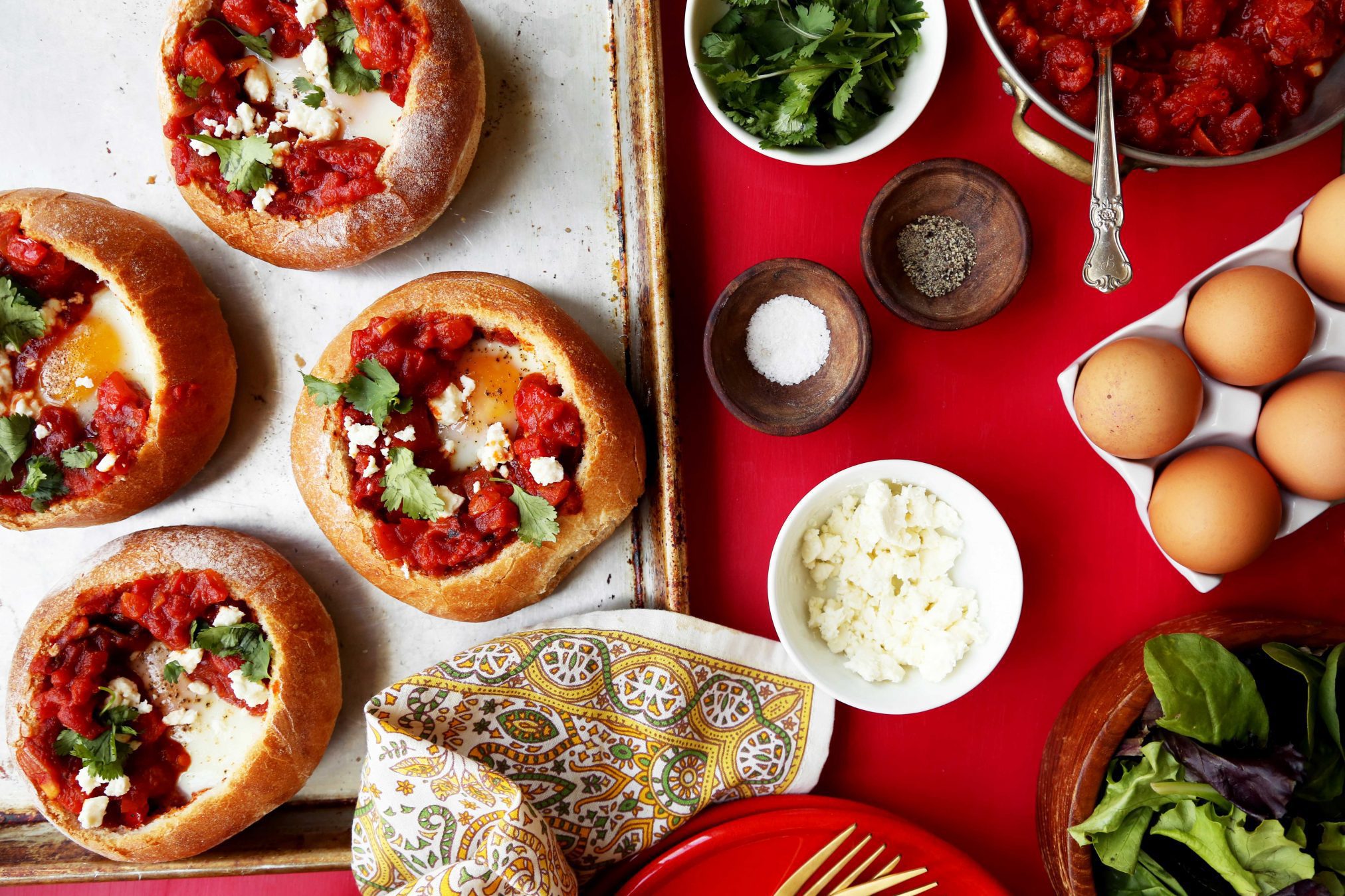 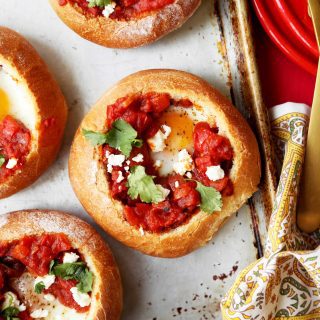 Croissant Ham and Cheese Egg Bake will be your new