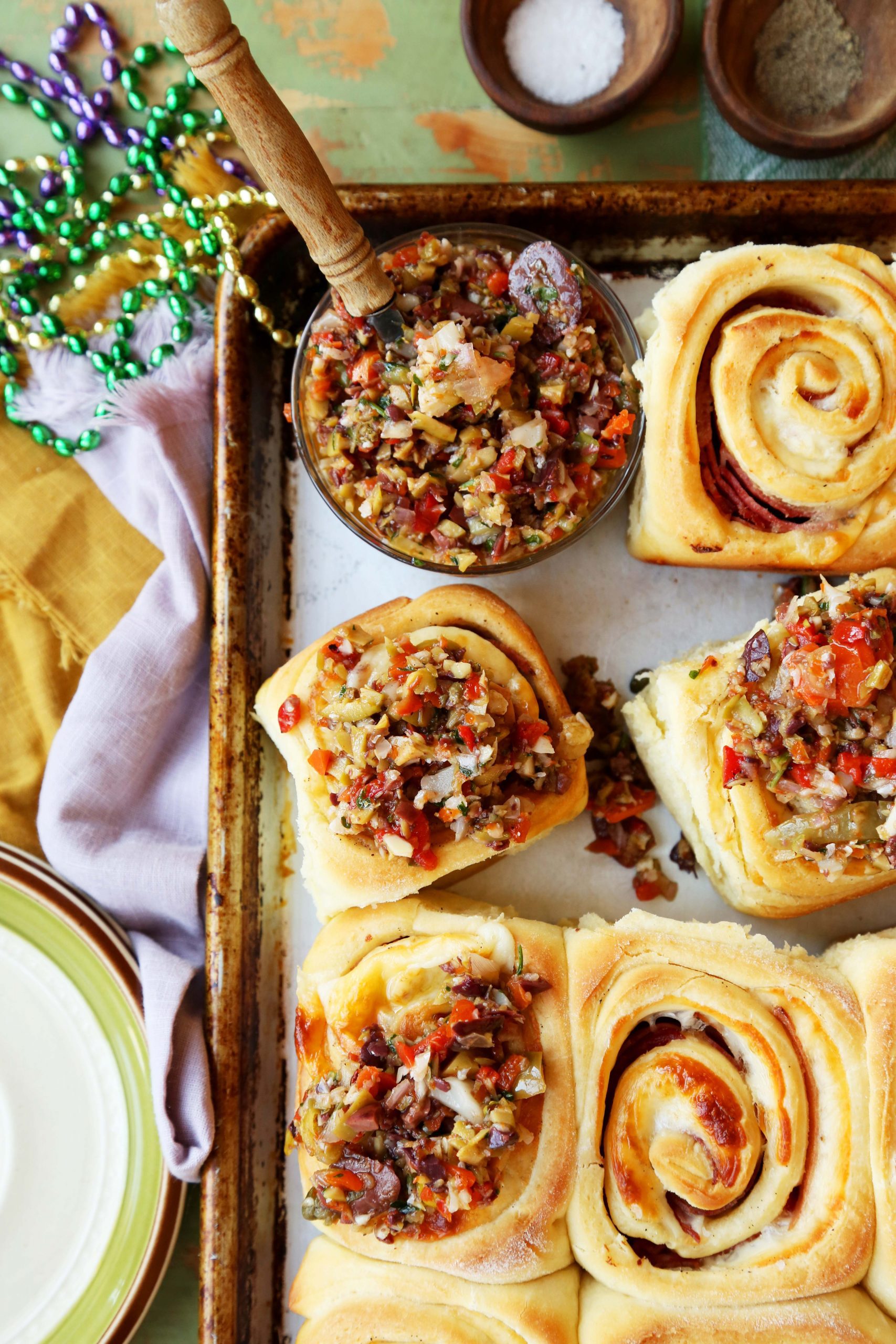 I had originally planned for this recipe to go up a bit earlier, so that you can make it for Mardi Gras, but of course life got in the way and I a got a bit busier than I had anticipated. But as they say it’s better late than never. These Savory Muffuletta “Cinnamon” Rolls might be great at any Mardi Gras dinner, but the best part is that they’d actually be a star all year long. They’re that perfect sandwich alternative when you’re looking for something new and exciting for your next picnic, potluck or weekend get together. Savory bread dough filled with sliced cheese and meats and of course topped with that signature muffuletta olive salad. Bring a little bit of New Orleans to your house! If you’re looking for more savory “cinnamon” roll inspiration might I offer you this Garlic Bread version or perhaps this Taco flavored one? They’re all my favorites. 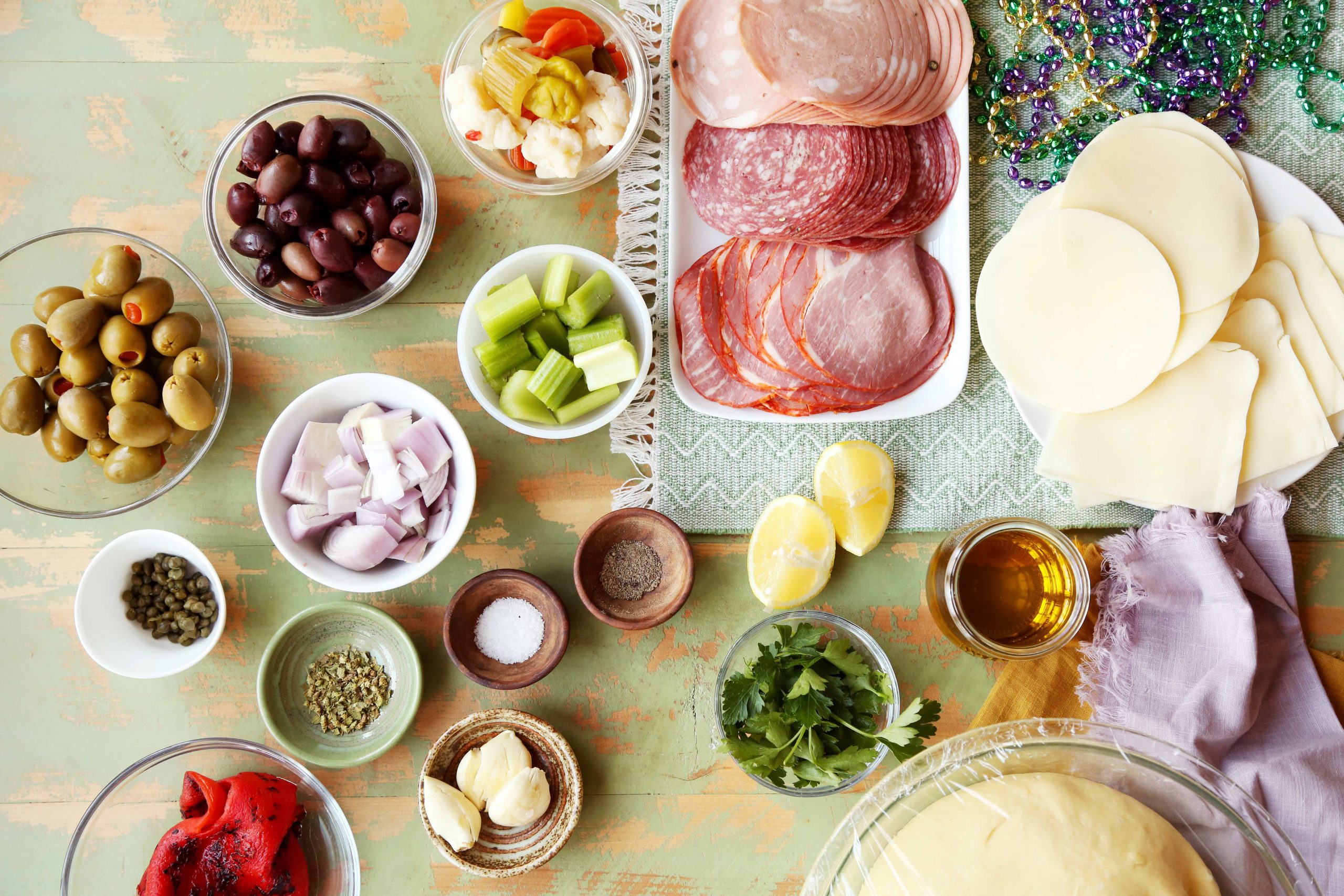 Let’s talk dough for a quick second. This is my basic cinnamon roll dough with the sugar cut down because we want these rolls to be savory and not sweet. I’m not showing the step by step process in this post because I’ve shared it a few times already and so I didn’t want to bombard you with the same steps. If you’d like a more in depth tutorial, check out this Garlic Bread “Cinnamon” Rolls post! 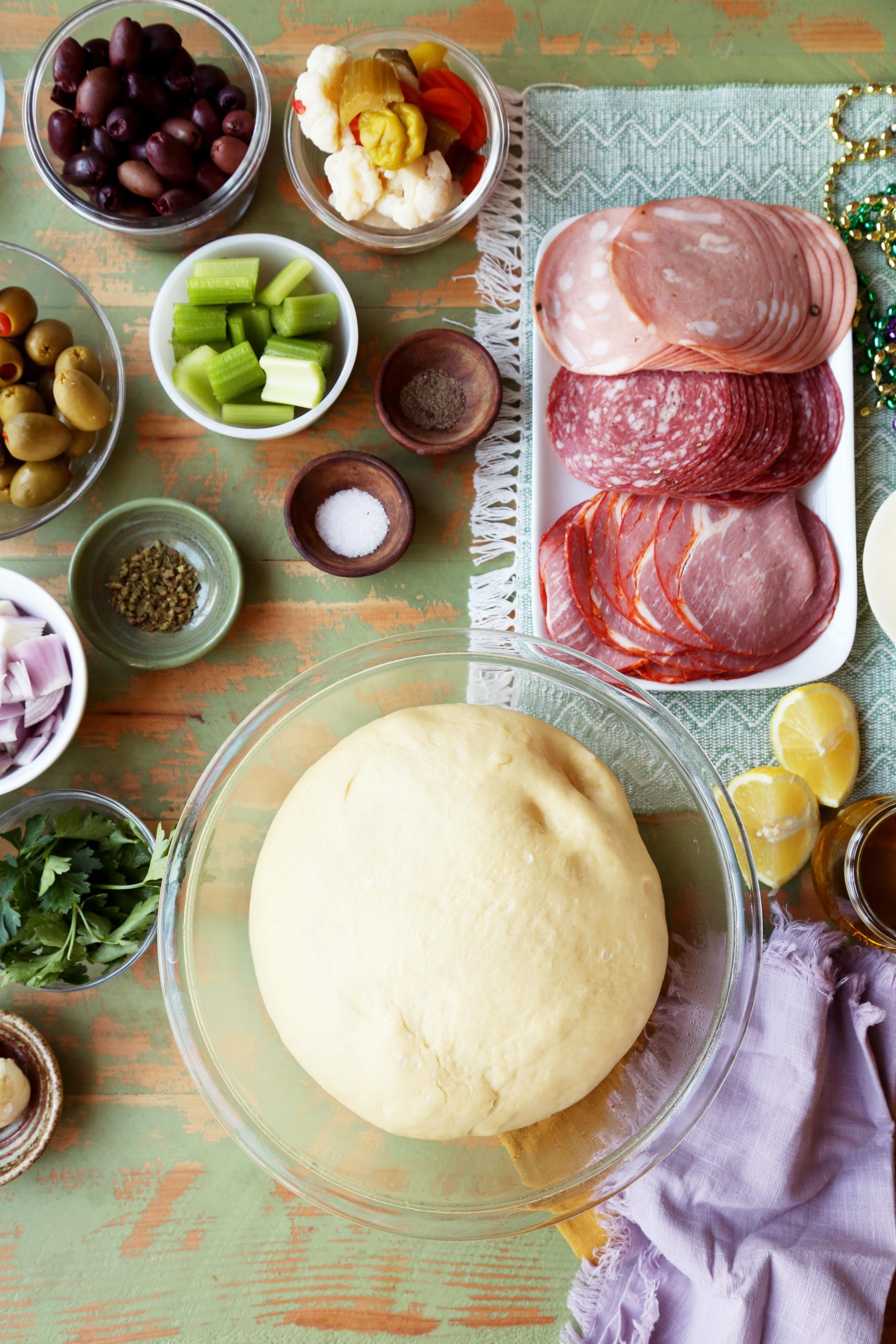 Once the dough has risen, punch it down and then transfer the dough to a lightly floured work surface. Roll out into a large rectangle about ¼-inch thick. Brush with olive oil and sprinkle with salt and pepper.

**Note: You want to flavor the dough so that it stands up to the heavy flavors of the filling and of course that olive salad topping!** 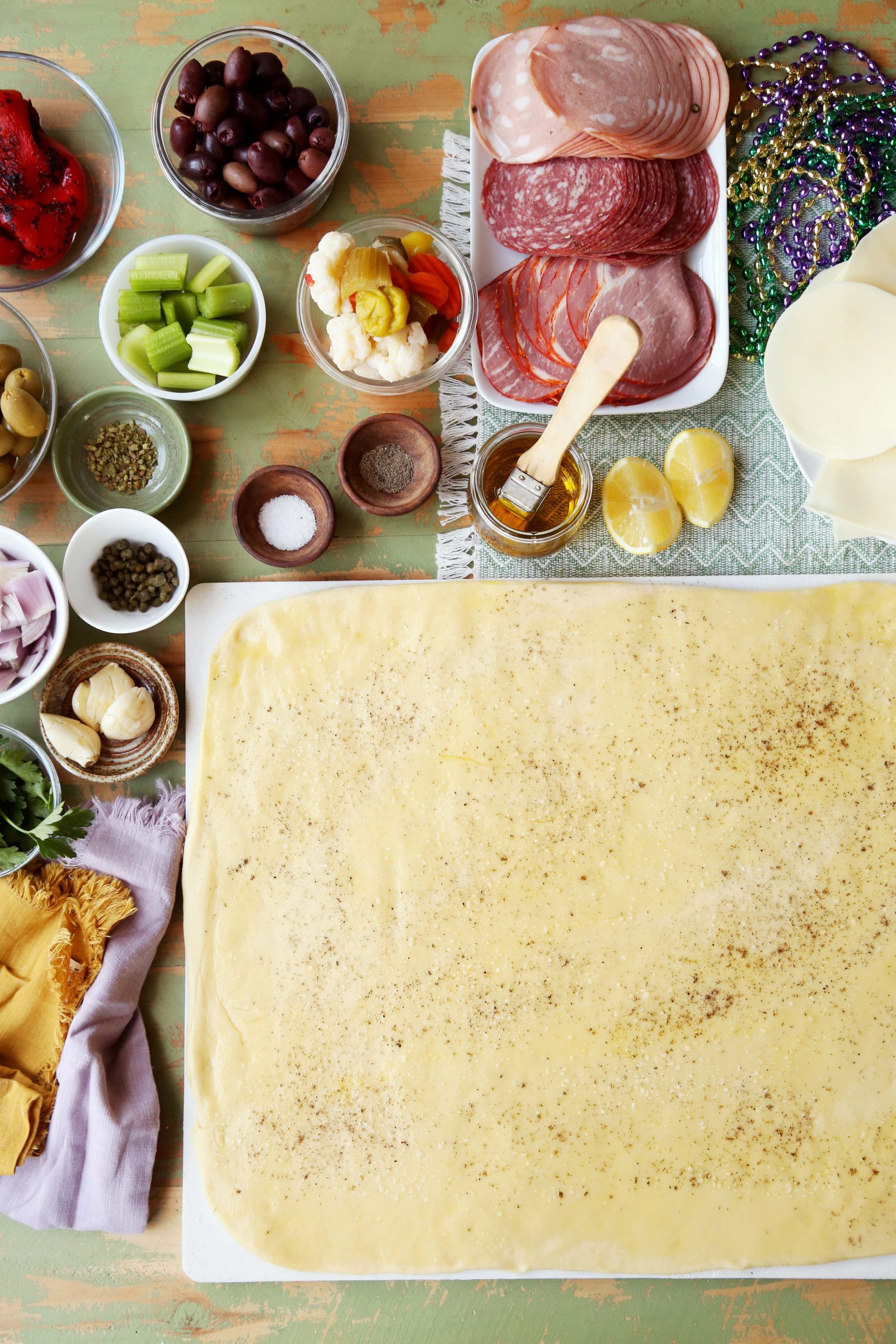 Lay out the sliced mozzarella and provolone cheese in an even layer. Then top with the sliced mortadella, genoa salami and hot soppressata.

**Tip: I’ve seen some muffuletta recipes with sliced ham, so if you’d like you can add that in as well or swap out one of the other meats for it instead!** 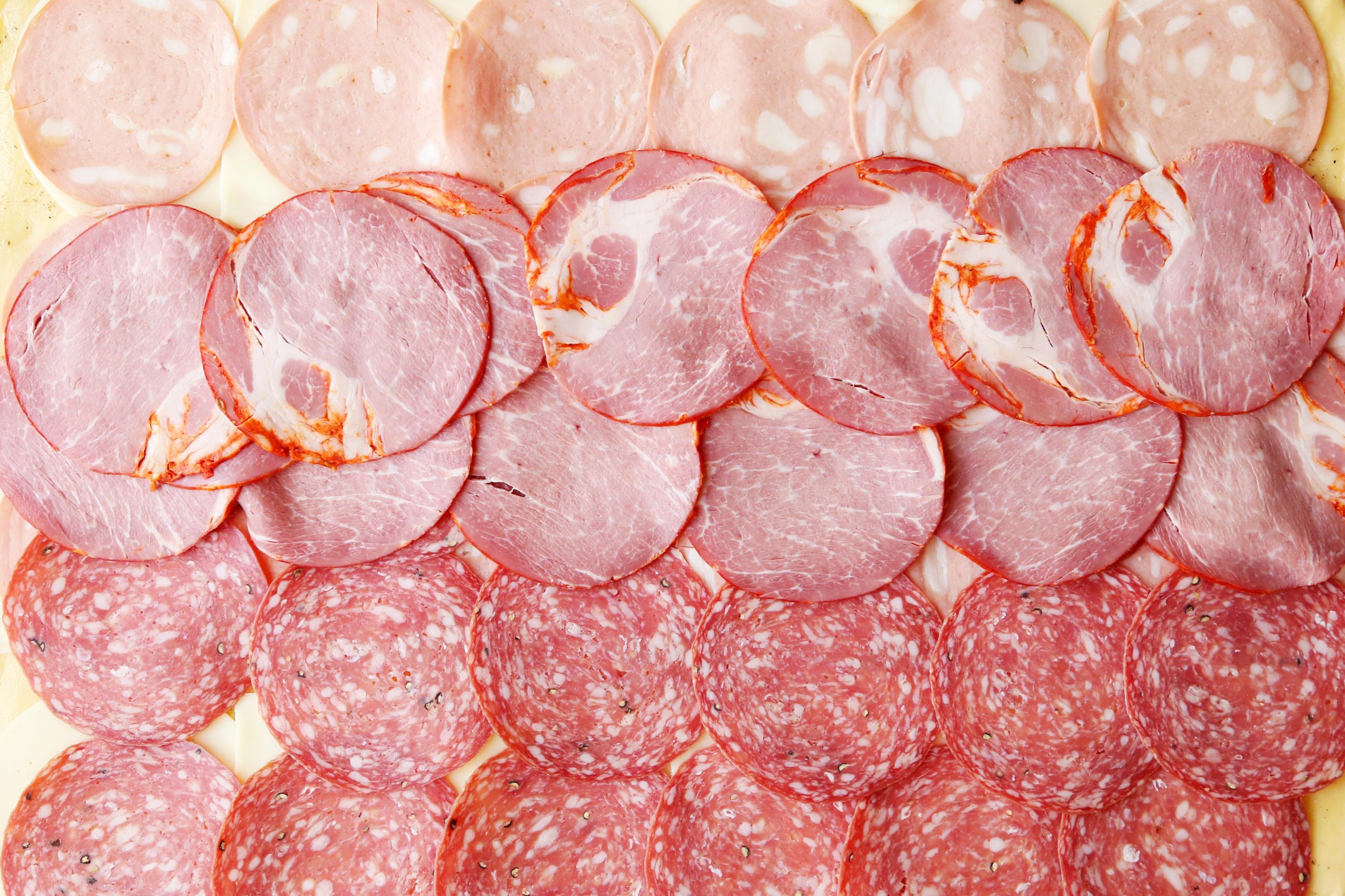 **Note: It’ll be a bit difficult at the very beginning but once you get past that first initial roll, the process will get easier. Just make sure that you roll it up as tight as possible so that the filling stays put.** 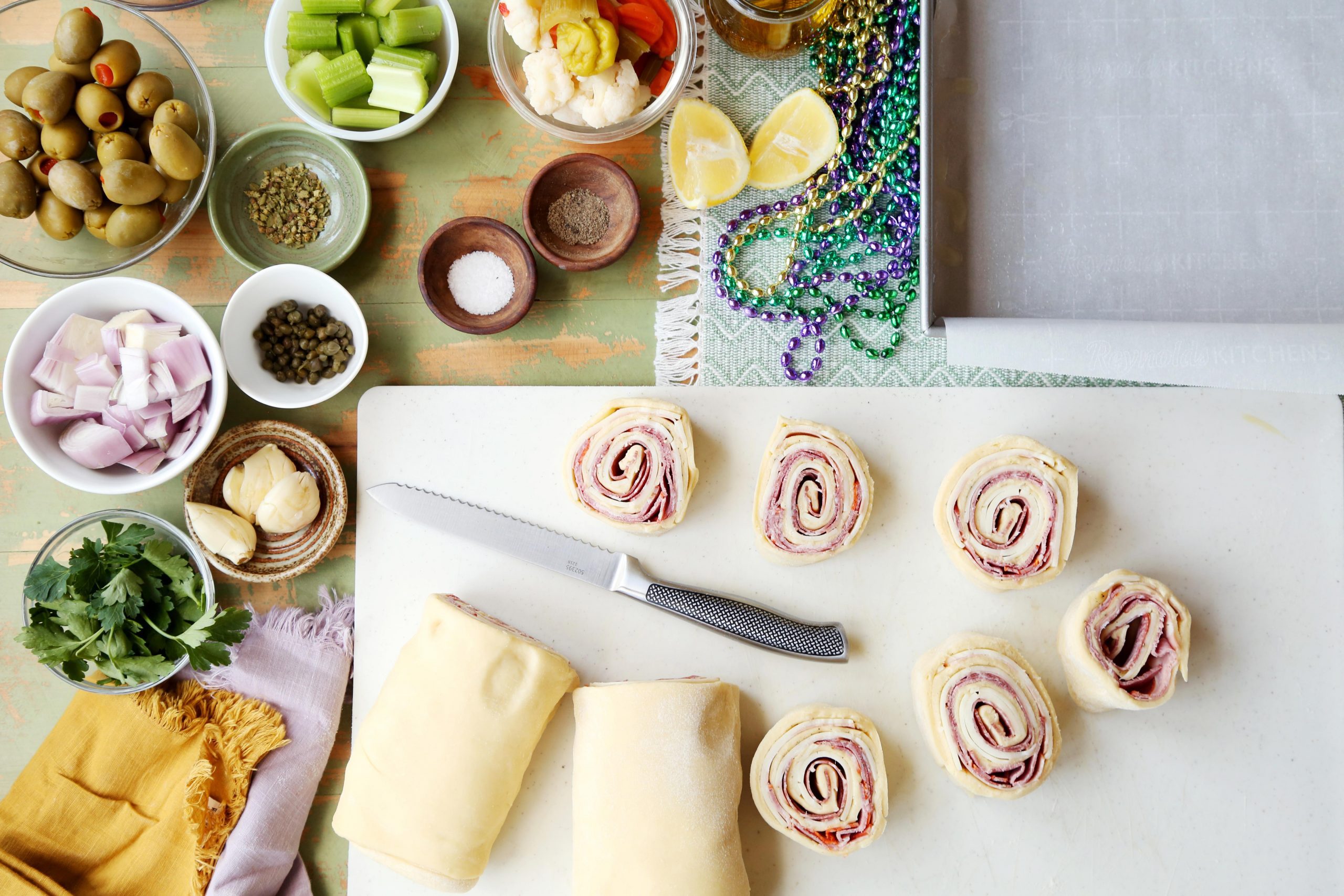 Place in a 9 by 13-inch baking pan that has been lined with parchment and greased with cooking spray. Cover loosely with plastic wrap and a damp kitchen towel. Allow to rest in a warm spot until doubled in size, about 1 hour. 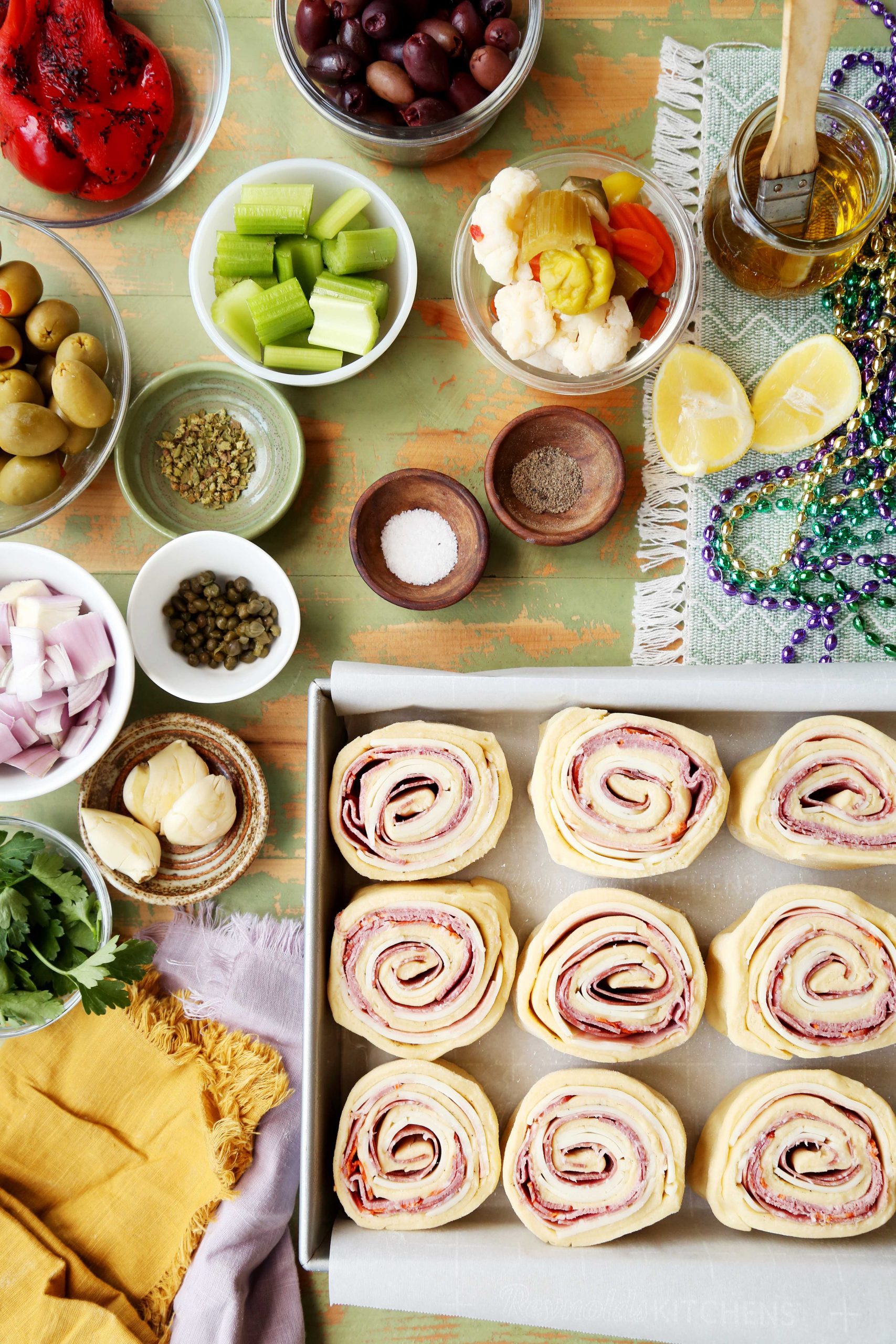 Meanwhile, to make the topping, combine all of the ingredients in a food processor and pulse a few times until chunky. You might have to stop the machine and scrape down the sides and bottom of the bowl a few times to make sure it’s all evenly combined. 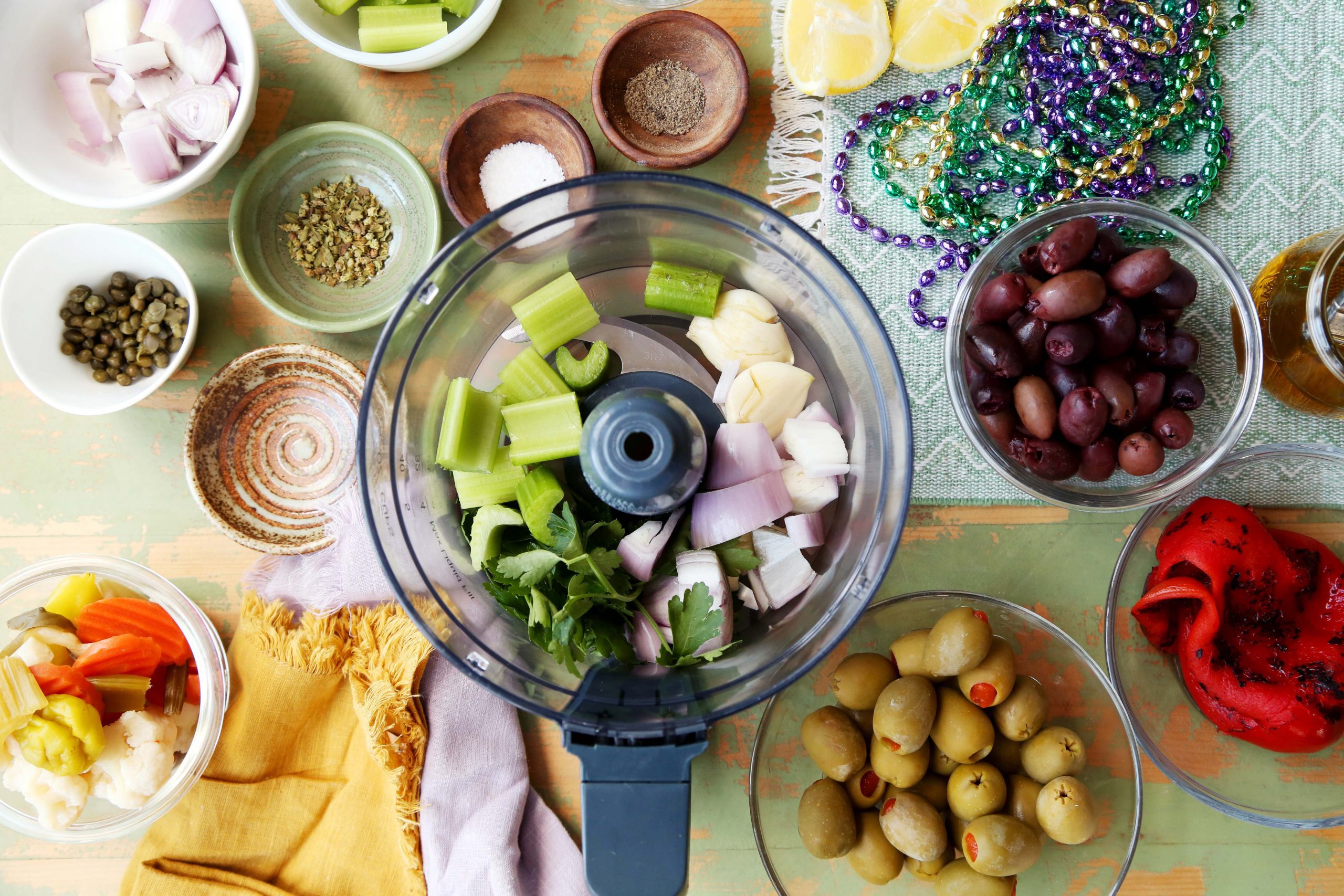 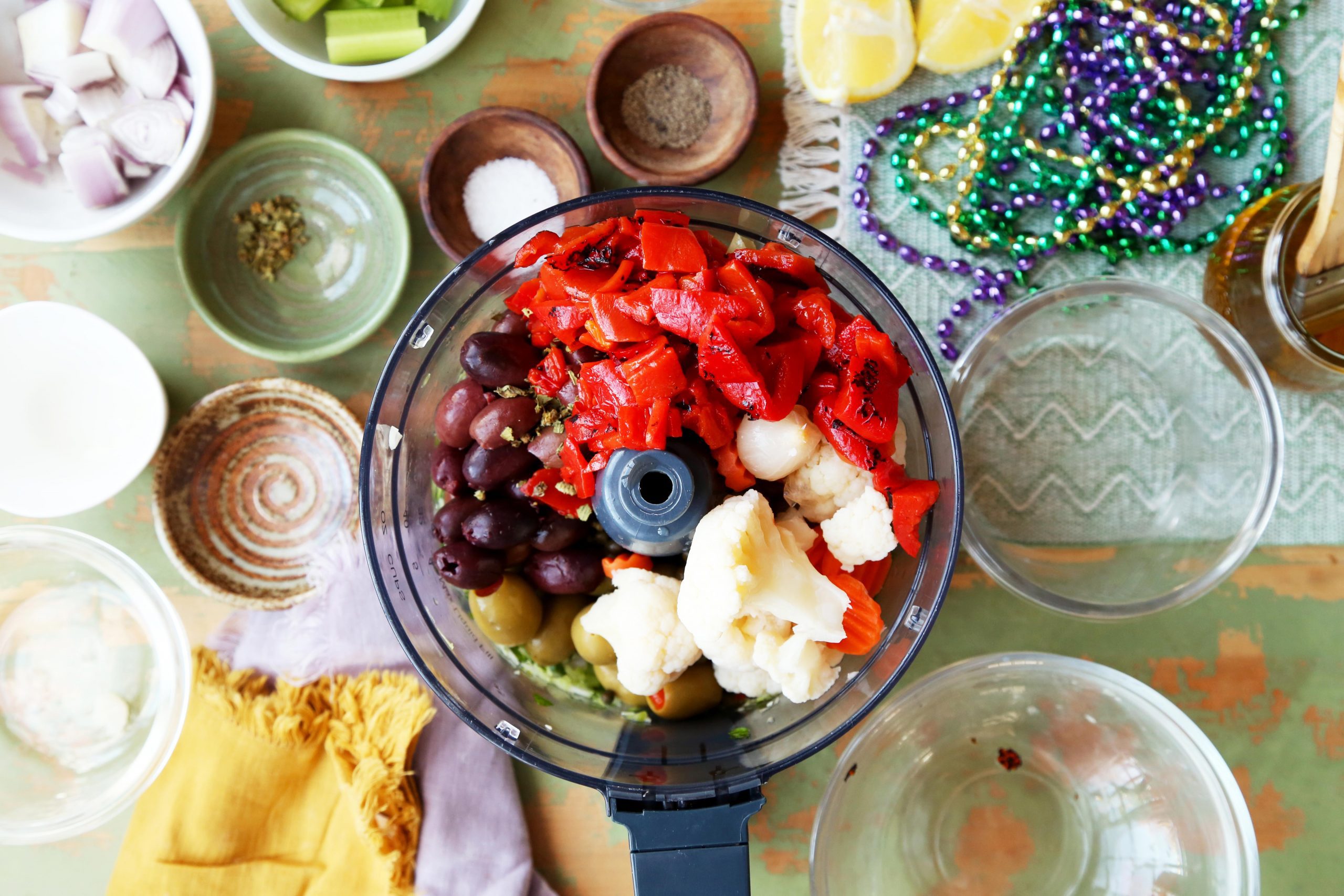 Transfer to a large bowl and give it a taste. Adjust seasoning accordingly adding more salt or pepper as needed.

**Note: The topping can be made ahead of time and refrigerated for up to 1 week. Also, they sell muffuletta topping in a jar at most grocery stores or online, so if you’d prefer to just buy it instead of making it from scratch, I wouldn’t be mad at that!** 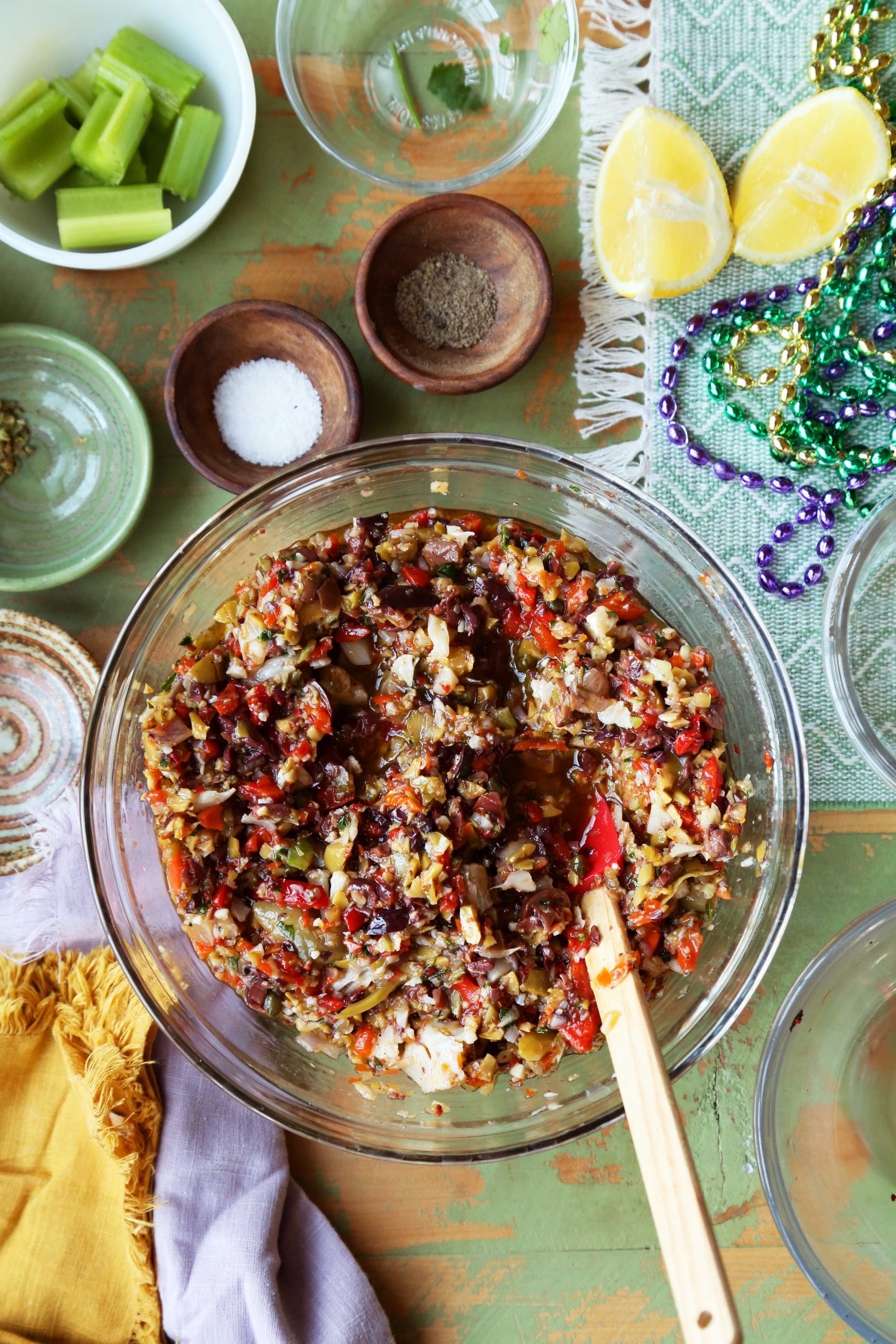 After the dough has risen, preheat oven to 350° F. Bake the rolls until puffed and golden brown, about 30 to 35 minutes. Remove from the oven and let cool slightly. 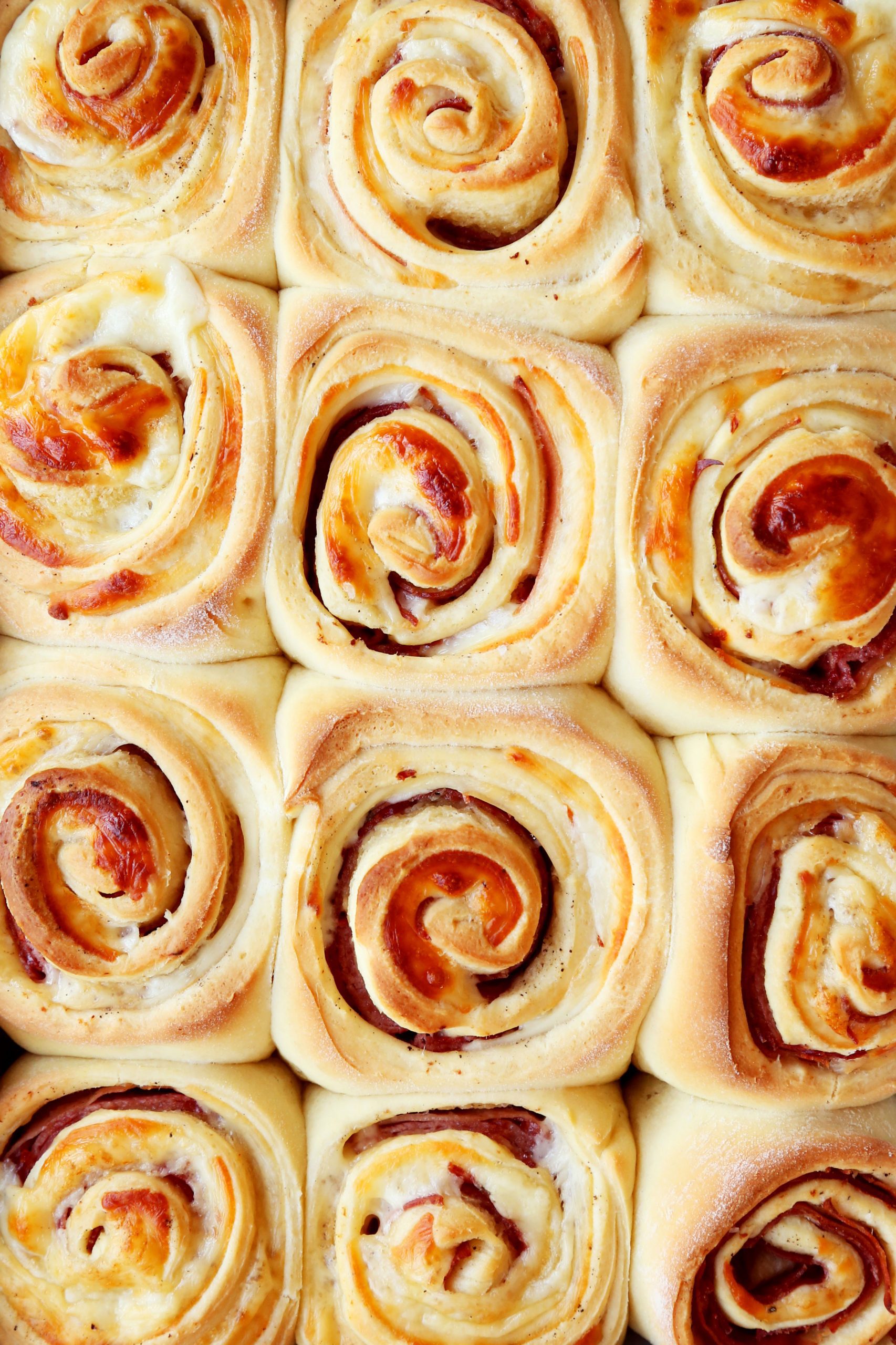 You’ll want to serve the rolls warm with a few spoonfuls of the olive salad on top. I recommend not topping until ready to serve so that the rolls don’t get soggy. 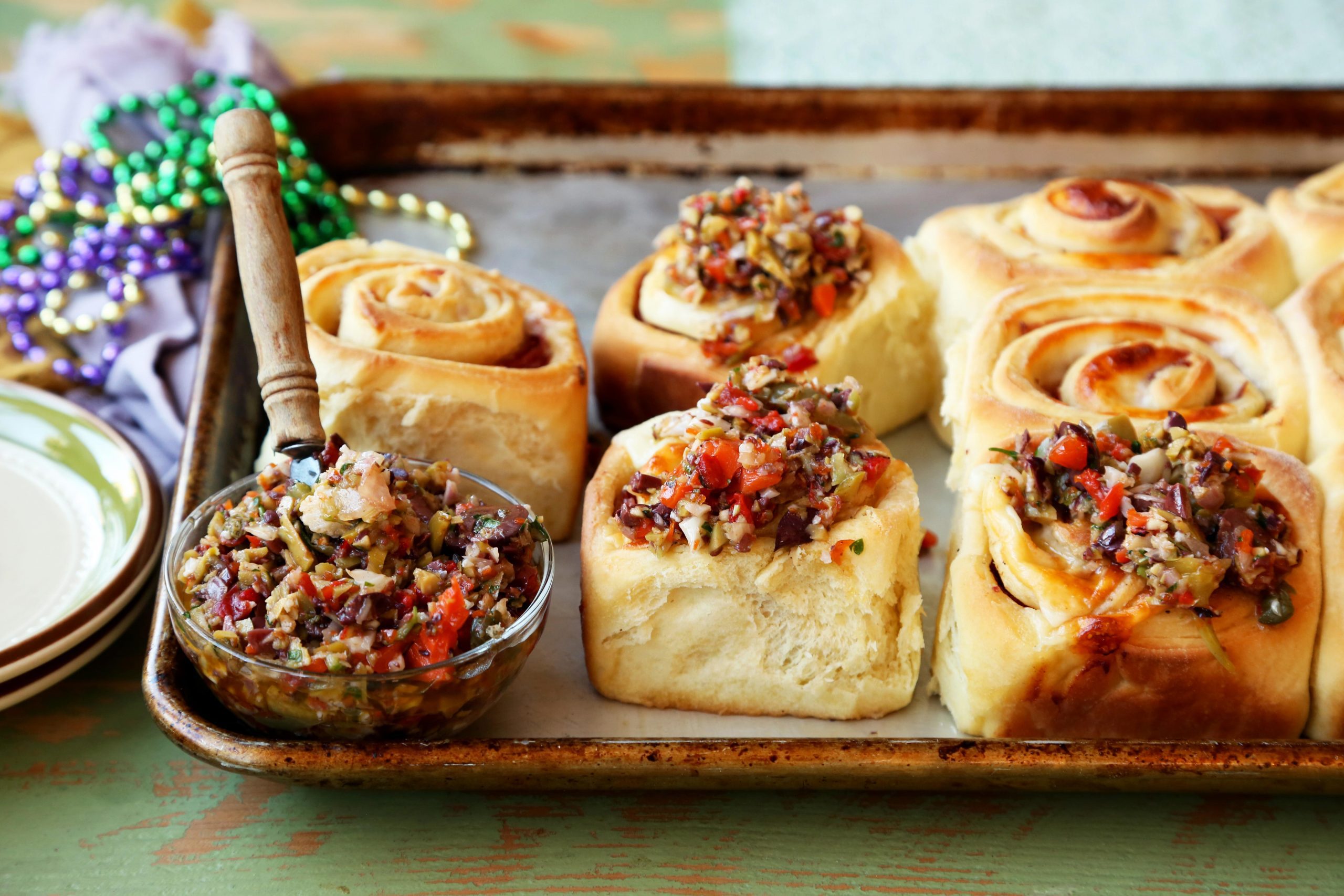 You can make the rolls ahead of time, bake and cool completely. Then either store in the fridge or freezer until ready to eat. You can rewarm them in the oven for a few minutes (or longer if frozen) and just top with the olive salad right before serving. 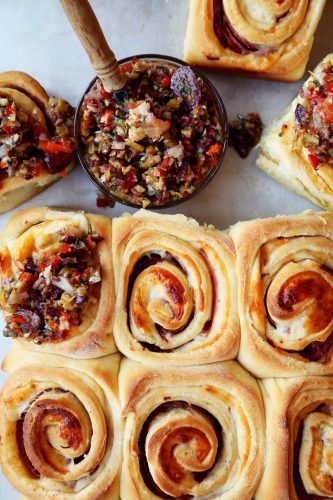 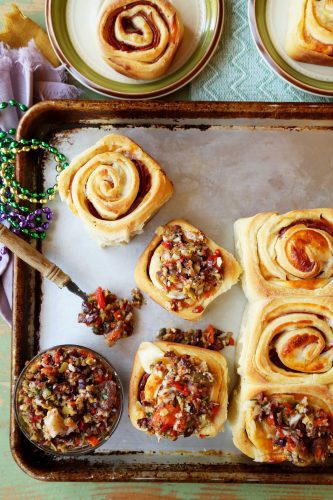 Whether you’re celebrating Mardi Gras or you’re just looking for a new take on a New Orleans classic, this recipe is a winner. Give it a try the next time you’re looking for that perfect picnic recipe or something tasty to serve at your next party. Let me know what you think below! 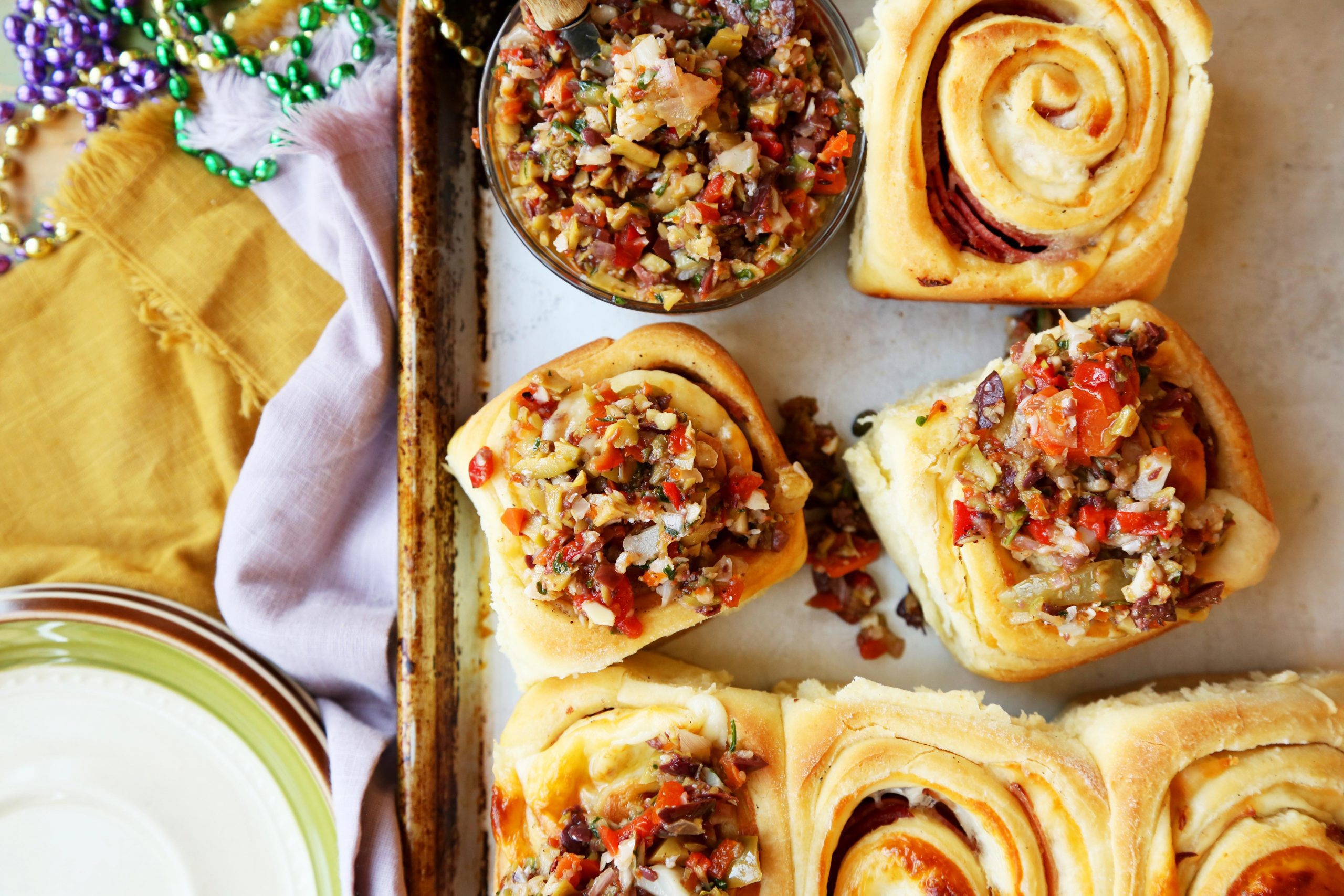 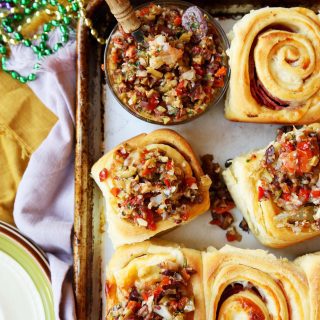