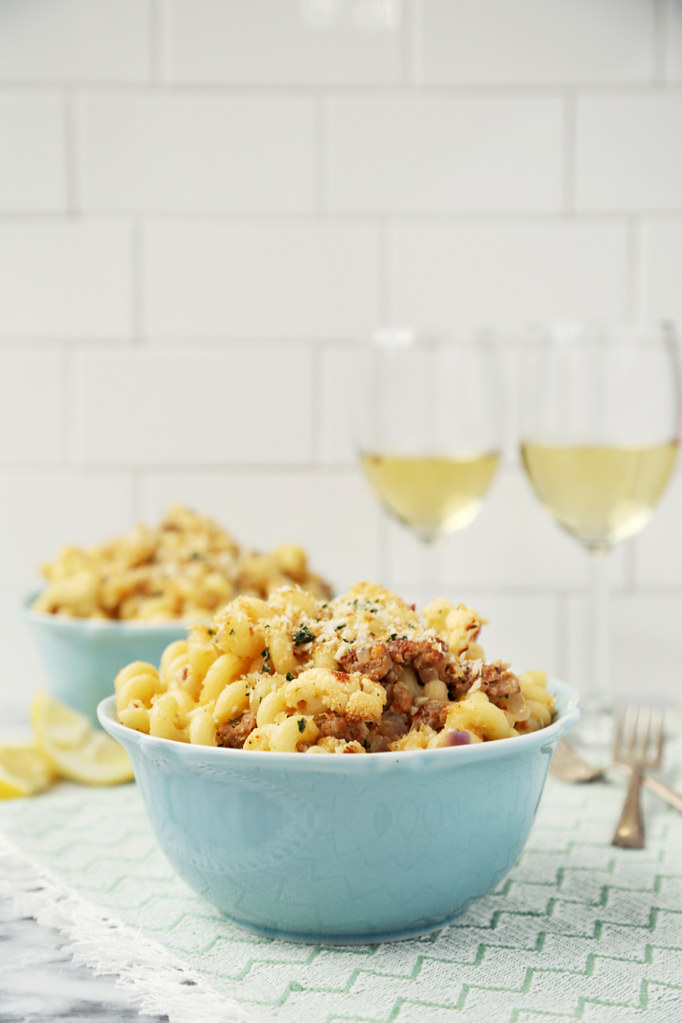 I cook a lot because of what I do for a living, but I don’t have to tell you that, I’m sure you already knew this. If you looked in my fridge right now you would see an obscene amount of food. It’s packed with food storage containers filled with various dishes, ranging from appetizers to salads to entrées from the week’s work. Sometimes it’s crazy how much of it there is in my house at any given moment, but crazier is the fact that we can’t always seem to eat it fast enough. We’ll have friends or family over often, and basically force food down their throats and even then we’ll find ourselves eating a certain dish for several days in a row. It’s a good thing I happen to really love leftovers. It’s not a good thing that Julian is meh about leftovers.

Because I spend so much time in the kitchen on a daily basis, there are times every now and then where the last thing I want to do is get in the kitchen, yet again, and make dinner. Sure, on more than a few occasions what I make and shoot ends up becoming dinner, but as much as I would love for Chunky Monkey Sticky Buns and Strawberry Pistachio Cupcakes to be a hearty supper, it doesn’t always work out that way. Unfortunately my doctor says I need a well rounded meal with protein and vegetables. The nerve! On those days, I find myself making the easiest of dishes. We’ll have tacos (my go-to option) or tuna sandwiches (against Julian’s wishes) for dinner because it’s the quickest thing I can whip up without going crazy because I’ve just spent the entire day in the kitchen. Julian will cook a few nights out of the week which totally makes me happy, and I’ll just spend the night on the couch drinking a cocktail and bask in the pampered life.

We’ve recently made a valiant effort to have a date night at least once a week (every Thursday) where we go out and enjoy a meal somewhere we’ve never eaten before. It gives us a chance to try one of the many restaurants in our neighborhood. I do have to admit though, at times, mainly due to me falling in love with a particular place, we’ll go back to the same restaurant a few weeks in a row. On one of these evenings we tried a cauliflower dish that was out of this world. It was battered and fried and served with a garlic aioli and I couldn’t get enough. Easily one of the best dishes I’ve ever eaten outside of my house. Ever since then, cauliflower and I have become the greatest of friends. We’re kind of, sort of inseparable. I’ve now added this Roasted Cauliflower and Sausage Pasta to the rotation when I don’t really feel like cooking because it’s so easy to make. I can shut off my mind and bring it together in no time at all. Although it’s simple with only a handful of ingredients, it’s one of the tastiest pastas you’ll ever try. Cross my heart and kiss my elbow. 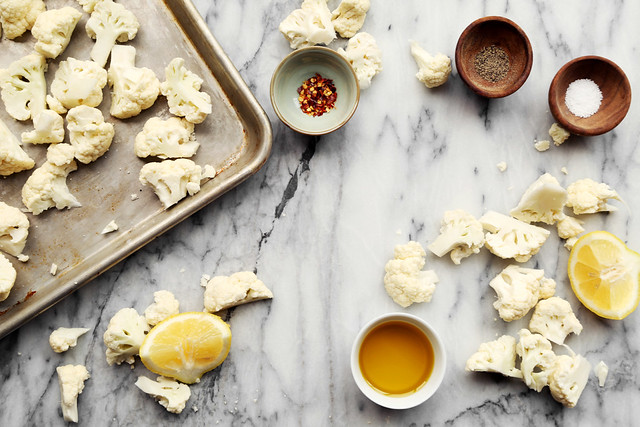 The first thing we have to do is roast the cauliflower. It’s the simplest of tasks but at the same time it’s the most important. Roasting the cauliflower will bring out it’s incredible flavor. I wasn’t a big fan of the vegetable until I tried roasting it. Everything changed after that. Cut the whole head down into florets and place them on a baking sheet. Toss with olive oil, lemon juice, salt, pepper and chili flakes. 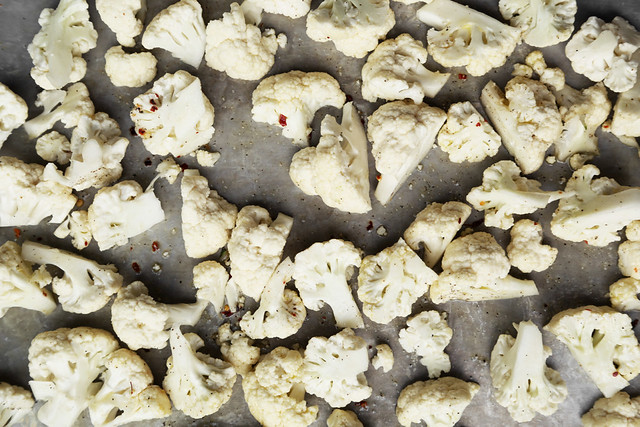 Bake in a preheated 400ºF oven until golden brown and crispy, about 20 to 25 minutes.

**Tip: Make sure the cauliflower is in a single layer on the baking sheet. If you over crowd it, the pieces wont roast evenly and they’ll end up steaming instead of browning!** 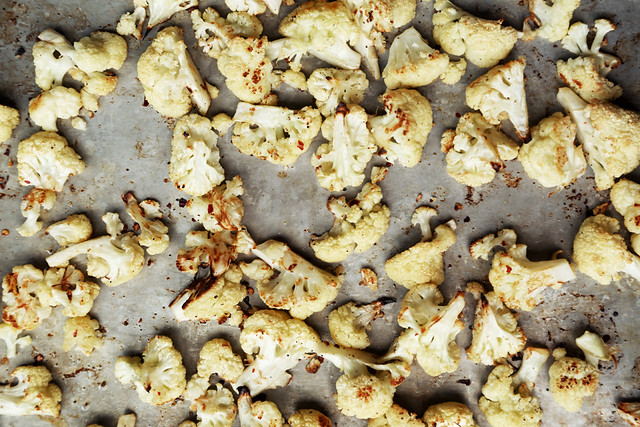 Remove from the oven and set off to the side. Forget about it. Don’t even think about the cauliflower anymore. Let’s turn our attention to the rest of this dish.

Place a large pot or dutch oven over medium-high heat with a drizzle of olive oil. Add the spicy Italian sausage and cook until browned and crispy. Add the red onion and garlic and cook until softened, about 5 to 8 minutes.

**Note: I removed the sausage from the casing by squeezing the meat in the center and pushing it out. Then I using a wooden spoon to break down the sausage while it cooked. I like when there are different sized pieces of browned crispy sausage throughout the pasta, so I didn’t break it down too much.** 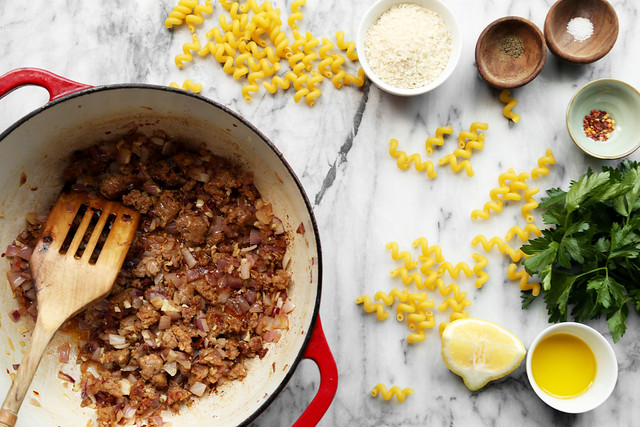 While the sausage, onion and garlic cook, toast the bread crumbs. Combine the panko and plain bread crumbs in a small skillet with the olive oil and parsley. Stir to evenly combine and place over medium to low heat. Toss frequently so that it doesn’t burn and cook until light brown and toasted. Remove from heat and set aside.

**Tip: Make sure you’re paying extra close attention to the bread crumbs and stirring them often because they’ll burn on you in a heartbeat. I had to do this step twice….okay three times. You’d think I’d learn my lesson the first time around.** 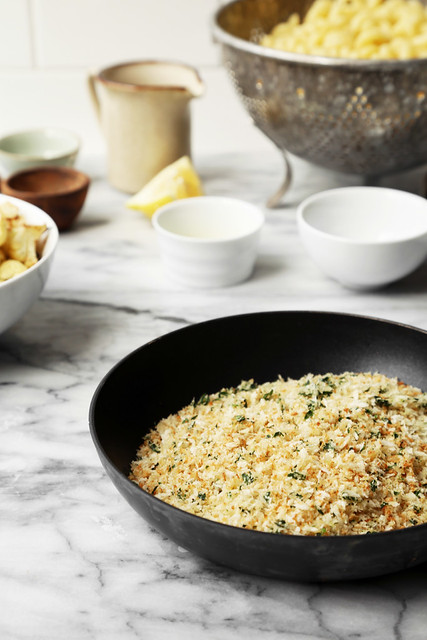 Cook the pasta according to the package directions. Right before draining, reserve about 1 cup of the water the pasta cooked in. Drain and then immediately throw the cooked noodles into the pot with the sausage and onion. 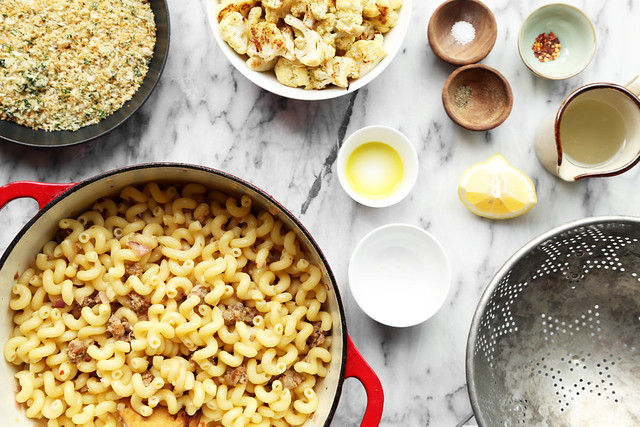 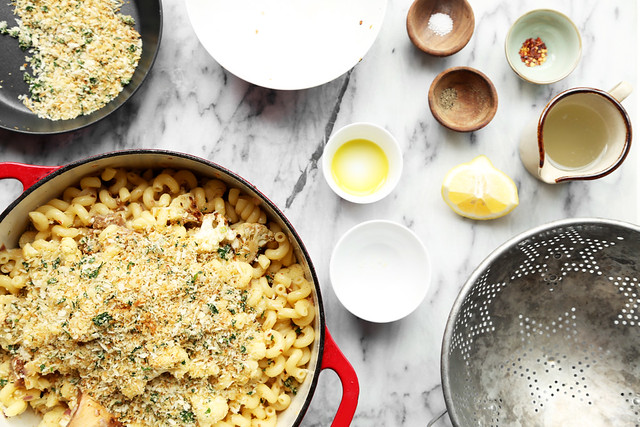 Season lightly with salt and pepper and give everything a great big toss to evenly combine. Allow the pasta to cook for a minute or two over low so that the cauliflower reheats and the flavors just sort of blend together. 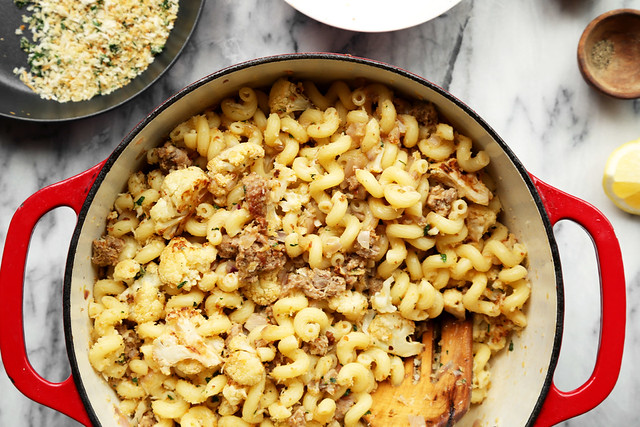 I like this dish because it doesn’t have one of those heavy sauces. I like a sauce on my pasta believe me, but sometimes you just want something on the lighter sauce. Something that isn’t loaded down with tomatoes or cream. It’s a nice change of pace for me. 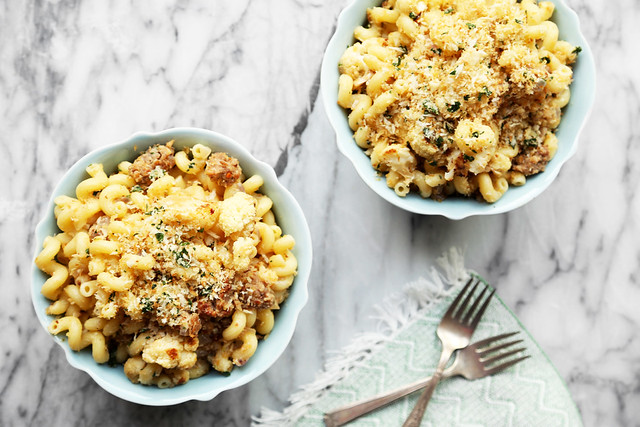 Serve in large bowls and sprinkle the tops with the reserved toasted bread crumb and parsley mixture. It’s a great weeknight meal you can whip up in no time at all. Serve it with a tossed green salad and a glass of chilled white wine. After a long day of work, running around doing errands, or cleaning the house, this is the perfect meal to make. Something you can do without thinking about anything other than relaxing with a big bowl of pasta. 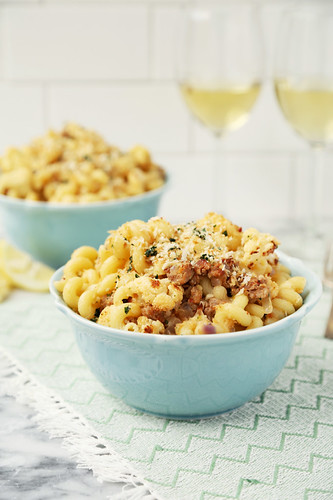 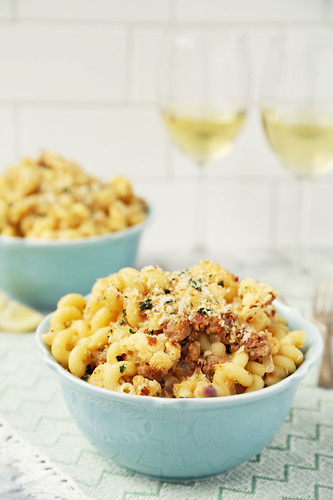 This recipe is one of those dishes you can make ahead of time and just reheat later on. It’s also great served cold or at room temperature, so it makes for a great dish to take to parties or gatherings.

**Tip: If you do plan on making this ahead of time, don’t toss in the toasted breadcrumbs until right before serving. That way the breadcrumbs will keep their texture and won’t get soggy!** 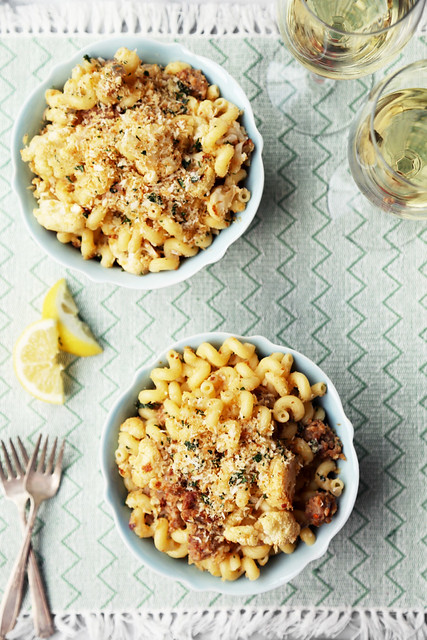 You can keep things vegetarian by simply omitting the sausage or if you want to switch things up a bit try it with ground turkey sausage that you’ve browned in pan with the onion and garlic. You can also add in a few more veggies if you’d like, like spinach or kale! The great thing about it though, is that there are a minimal amount of ingredients that taste so well together and is easy to make, especially when you don’t have that much extra time to cook. Enjoy! 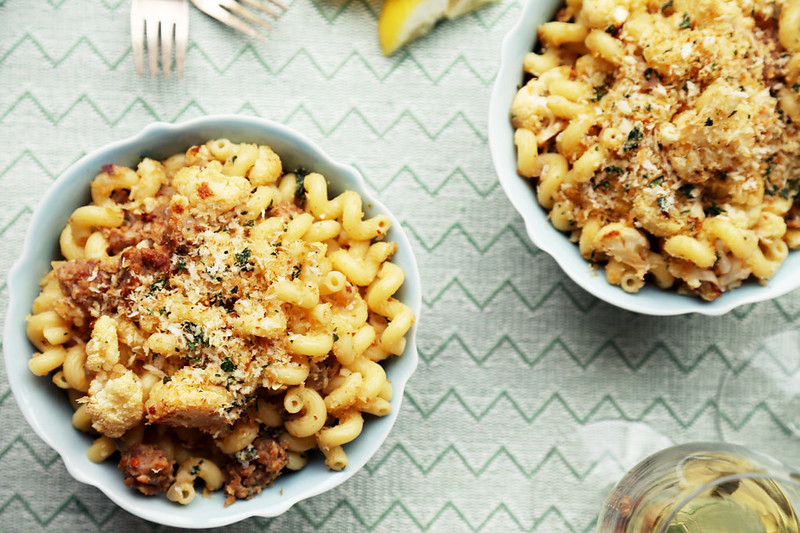 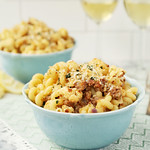