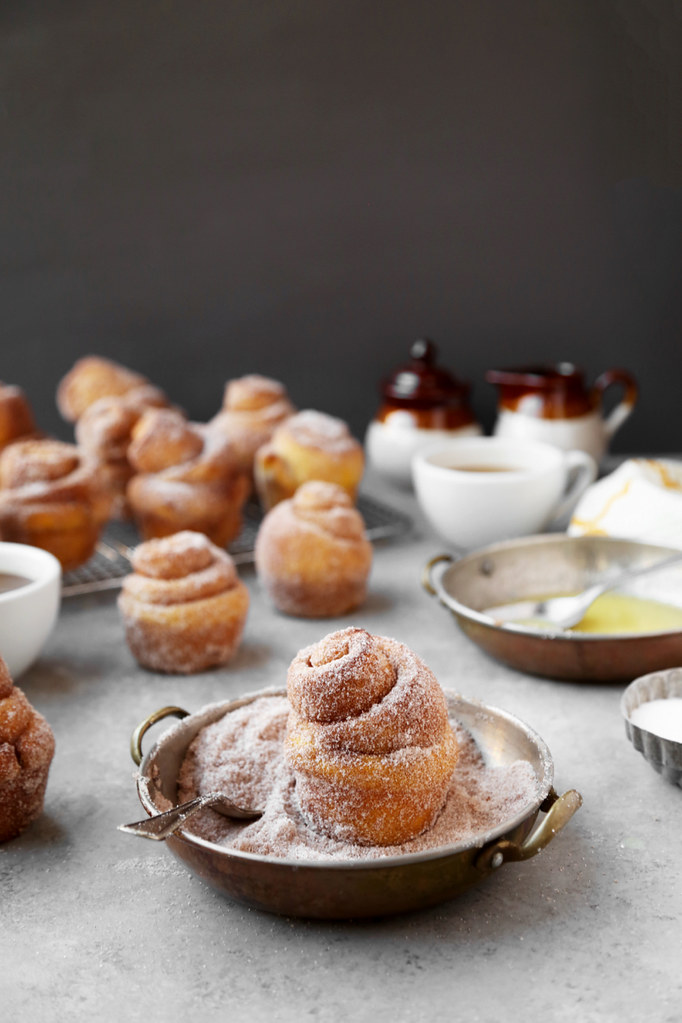 I’m baaaaaack! I’ve been gone for a few weeks (did you miss me?), putting the finishing touches to a special project that has taken me about 2 years to finish up. I can’t even begin to tell you how excited I am to share it with you all very soon. I can’t just yet though, but when the time comes, it’ll be amazing. You’ll cry, and then I’ll cry, and then we’ll all cry together some more. It’ll be magical. Everything I’ve ever dreamed of. I have been so busy focusing on this project, that I haven’t had much time for updating the site. I’m sorry about that. It’s been a long and painful 2 weeks without a new full recipe, and without creating a weekly distraction for you, believe me it pained me. I’ve missed it so much. Last week I did share a Croissant, Ham and Cheese Stuffing, just in case you didn’t catch it, but that was a shortened post so it doesn’t really count. It’s a great Thanksgiving stuffing if you’re in the market for one. Anyhow, now I’m back and I’m bringing you this irresistible dessert and/or breakfast that is perfect for the season. Did I mention how excited I am to be back?

I’m always so busy running around the days leading up to Thanksgiving, and especially super busy on the actual day, that I most often than not forget about making breakfast. Does that happen to you, or is it just me? It’s funny because I plan everything out for the big meal and I have it all mapped out meticulously, but for some reason year after year, I forget about making something for breakfast. By the time I remember, I’m knee deep in holiday cooking and my family is coming in and out of the kitchen asking if they can try something, anything. This year, however, I didn’t want to be unprepared. This year I waned to make sure to have something delicious and homemade ready to go for breakfast.

These Pumpkin Sugar Buns are everything a sugar bun should be; soft, flavorful and easy to whip up. If you can make and bake cinnamon rolls, you can definitely make these sugar buns with your eyes closed. The best part is that you can bake them the night before and then finish assembling them in the morning, right before you start cooking that turkey and making those sides. I like these sugar buns because they’re a bit more flavorful than regular sugar buns, thanks to the pumpkin and cinnamon. I’m all about cinnamon rolls with lots of cream cheese frosting, but sometimes we all just need a roll covered in cinnamon sugar, especially during the holidays. P.S. They’re not just for breakfast! They happen to make a great dessert as well. Bring them to your Friendsgiving party instead of pumpkin pie. Trust me, everyone will thank you for it. 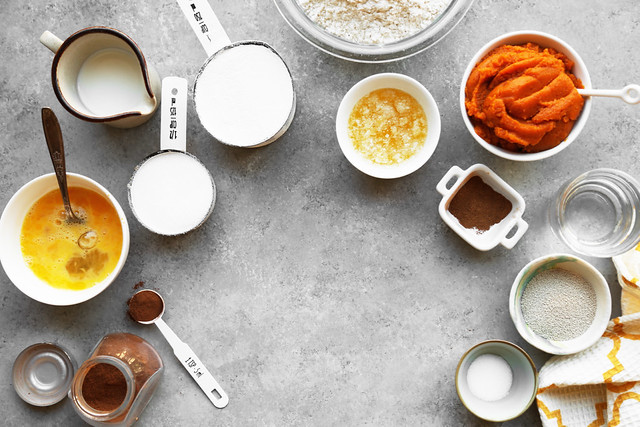 This is a basic yeast dough turned basic pumpkin yeast dough which you can use for many of your baked pumpkin goods this holiday season. Turn them into cinnamon rolls, sticky buns, dinner rolls or pumpkin cinnamon swirl bread. It’s my go to east dough, and when I don’t want that pumpkin flavor, I just omit the pumpkin purée and reduce the flour by 1 cup. 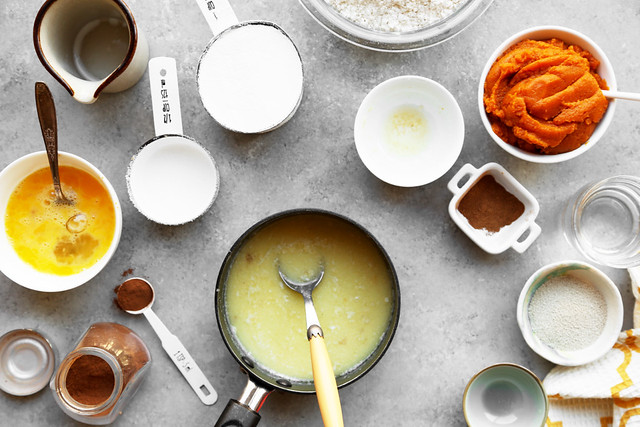 Start by warming the milk, butter and sugar in a small bowl until dissolved. Set aside. Then in a small bowl, combine the warm water with the yeast. Let rest until in a warm spot until foamy and frothy, about 10 minutes.

**Tip: I like to place it in an oven that is turned off. It’s the perfect environment for proofing yeast and bread. Or try placing it on top of the fridge as well! If the yeast doesn’t foam or froth, toss it and start again.** 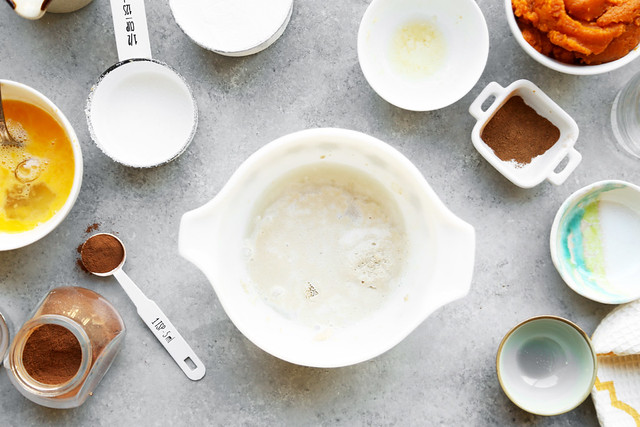 In the bowl of your mixing bowl (a stand mixer is your best friend here, although by hand is totally doable), combine the milk mixture, water/yeast mixture, eggs, pumpkin purée, salt, pumpkin pie spice and half of the flour until evenly combined.

**Tip: If you really want to Martha Stewart this whole situation, you can totally make your own pumpkin purée. I have a post in the archives which you can find here!** 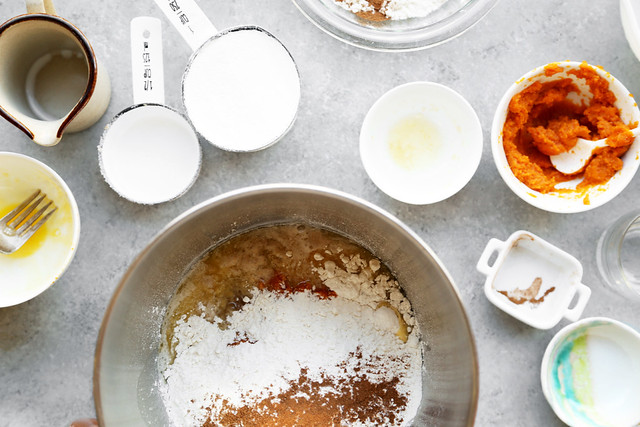 Add as much of the remaining flour as needed to create a smooth and somewhat sticky dough. Knead on high (using the dough hook) until soft and elastic. It should feel like a soft fluffy pillow. A pillow you’d want to sleep on all night long. 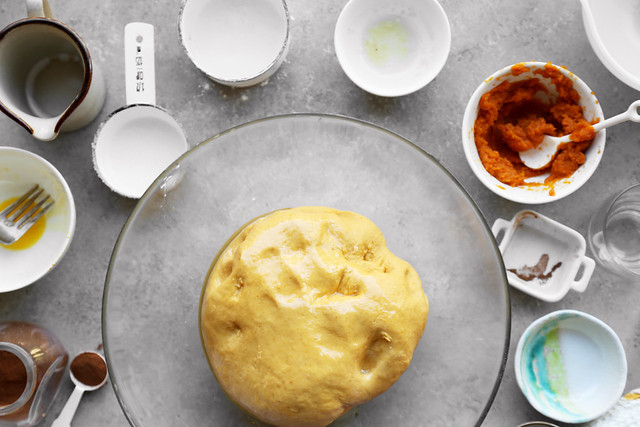 Transfer to a well oiled bowl, cover loosely with plastic wrap and a damp kitchen towel. Set in a warm spot until doubled in size, about 2 hours.

**Tip: Again, try popping it in the oven (turned off) or on top of the fridge for that perfect draft-free warm spot. It’ll rise like there’s no tomorrow.** 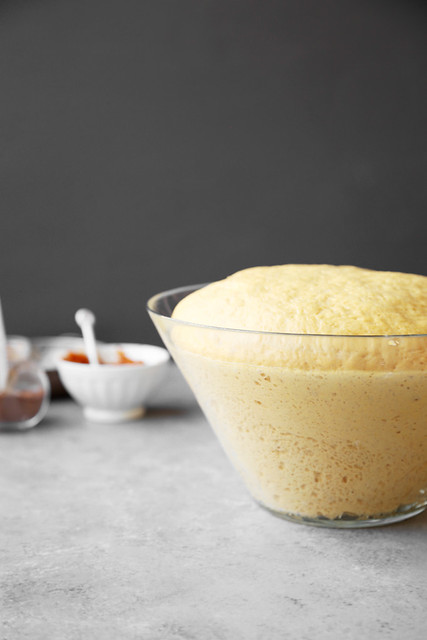 Punch the dough down and then transfer to a lightly floured work surface. Cut in half and then working with one half of dough at a time, roll out into a large rectangle 1/4-inch thick. Brush with melted butte and then sprinkle with cinnamon sugar.

**Note: To make your own cinnamon sugar, mix together about 1/2 cup granulated sugar with 1 tablespoon ground cinnamon. You can just eyeball it really. There’s no precise science behind it. I’d make a big batch of it, if I were you because you’ll need a lot for this recipe. For the filling and the coating.** 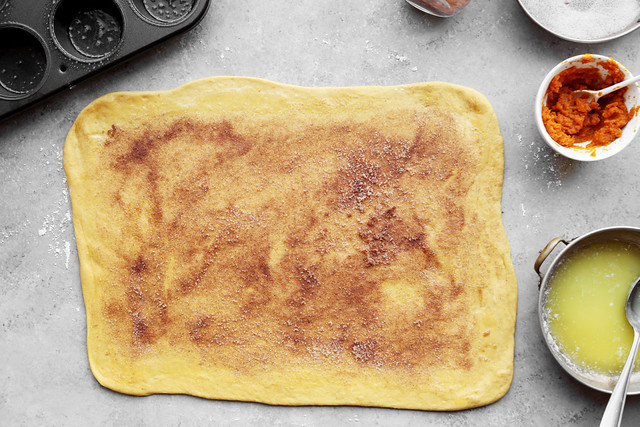 Roll into a tight log, lengthwise, and then cut into 12 even pieces. Place them in a well-greased muffin tin. Repeat with the second half of the dough. Cover loosely with plastic wrap and let rest in a warm spot until doubled in size, about 1 hour. 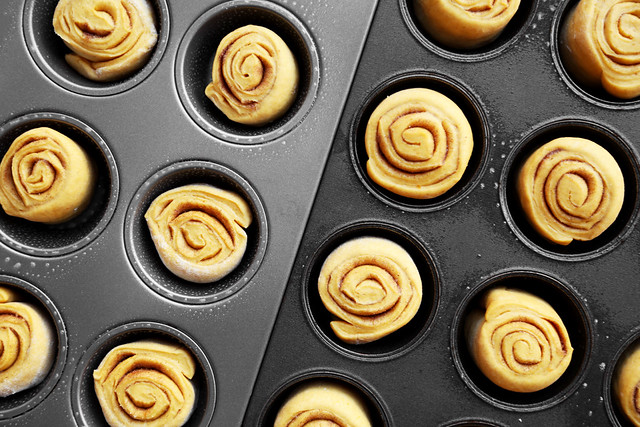 **Note: Make sure your oven racks are evenly spaced out so that the buns can rise properly during baking.** 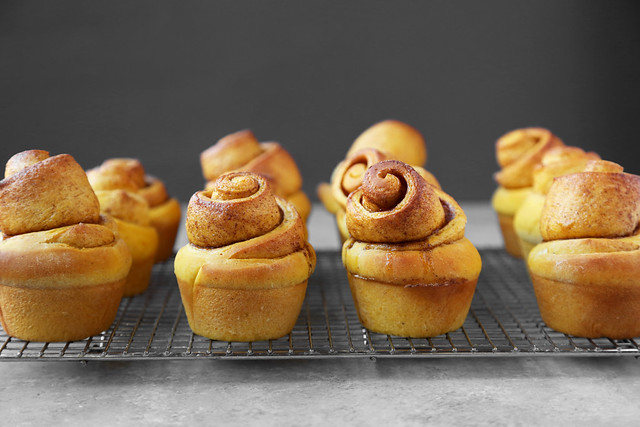 Once the buns have cooled completely, dip them completely in melted butter and then roll them around in cinnamon sugar. You want to make sure they’re totally coated in sugar. That’s why they’re called cinnamon sugar. 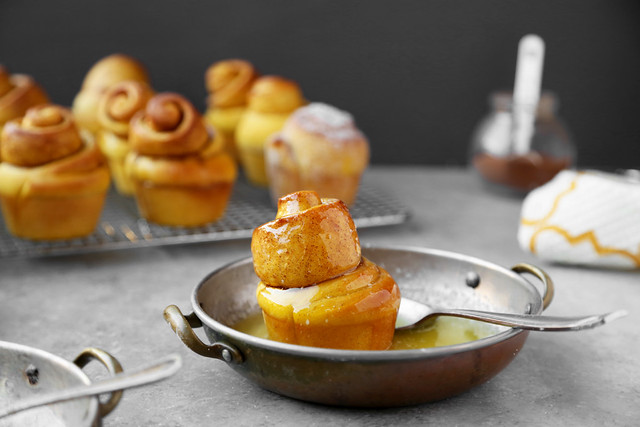 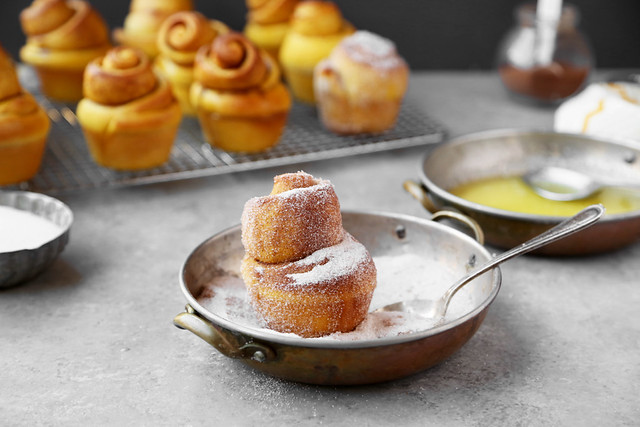 If you’re not planning on eating all of them right away (although, how could you not?) then I recommend only coating those you plan on eating. Cover the rolls and then coat as you go. It’s the best way to go around it for the freshest sugar buns possible. 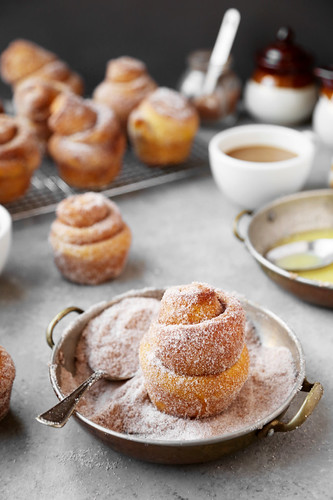 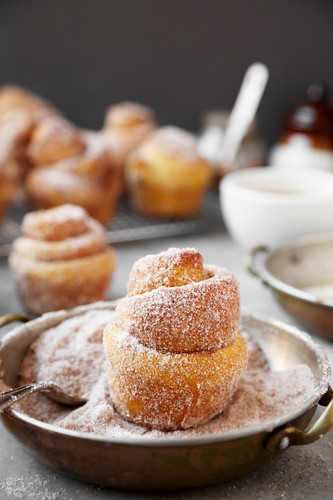 If you really want to plan ahead, you can bake off the rolls, place them in a freezer-safe food storage bag and then pop them into the freezer. Keep them in there until you plan on serving them. Just thaw in the fridge the night before and let sit at room temperature for a few hours. Right before serving, dip them in butter and roll around in cinnamon sugar.

**Note: They’ll keep in the freezer for up to 2 months or at room temperature (coated in sugar) for up to 2 days. Just make sure they’re well wrapped so that the stay soft.** 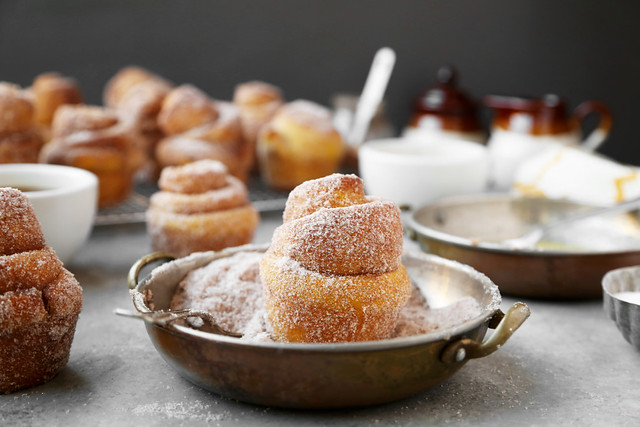 I love these rolls for breakfast, brunch, or even as a late night dessert after dinner. They’re sweet because of the sugar coating but with the right amount of spice from the cinnamon and pumpkin pie spice in the dough. The pumpkin gives them that perfect autumn taste. So if you’re looking for something new to make this pumpkin season, then look no further. These sugar buns are for you. 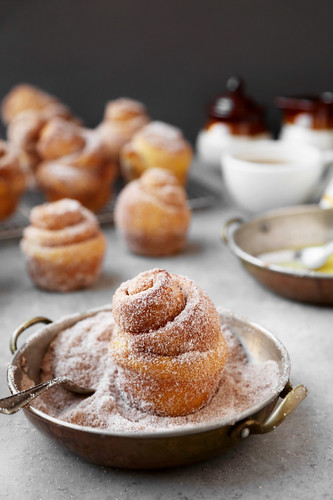 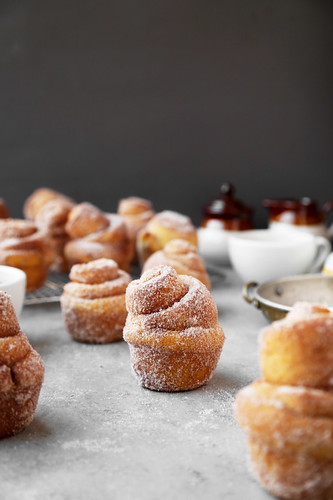 A few years ago I worked at a bakery, decorating cakes and cheesecakes, and the bakery made (well still makes) sugar buns as big as my head. I kid you not, as big as my head. I always remember them and so I wanted to make sugar buns for myself. These aren’t as big (although they are tall), but they taste just as good. I promise. Give them a try, you’ll become addicted. 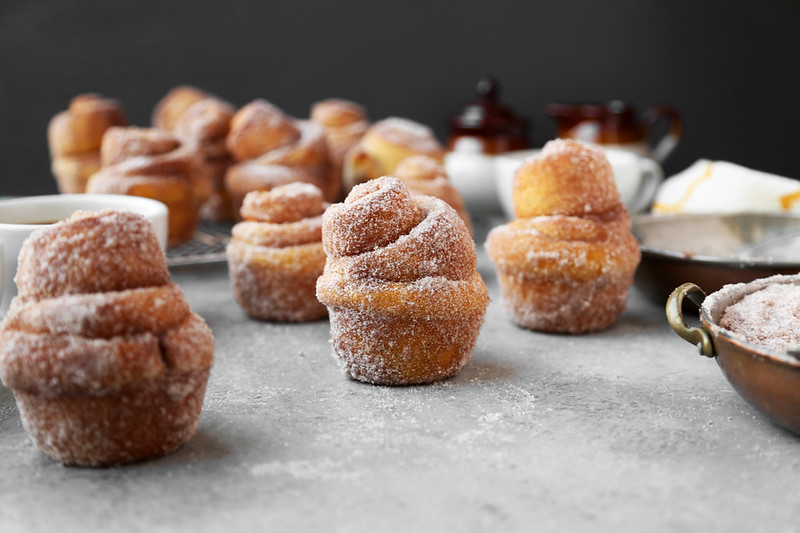 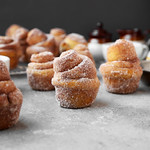 Print
Prep time
3 hours 10 mins
Cook time
25 mins
Total time
3 hours 35 mins
These soft Pumpkin Sugar Buns are perfect as a dessert or for brunch. You can make the dough the night before and then shape and bake off the next day.
Author: The Candid Appetite
Serves: 24 buns
Ingredients
Dough
Filling
Coating
Instructions
3.5.3226