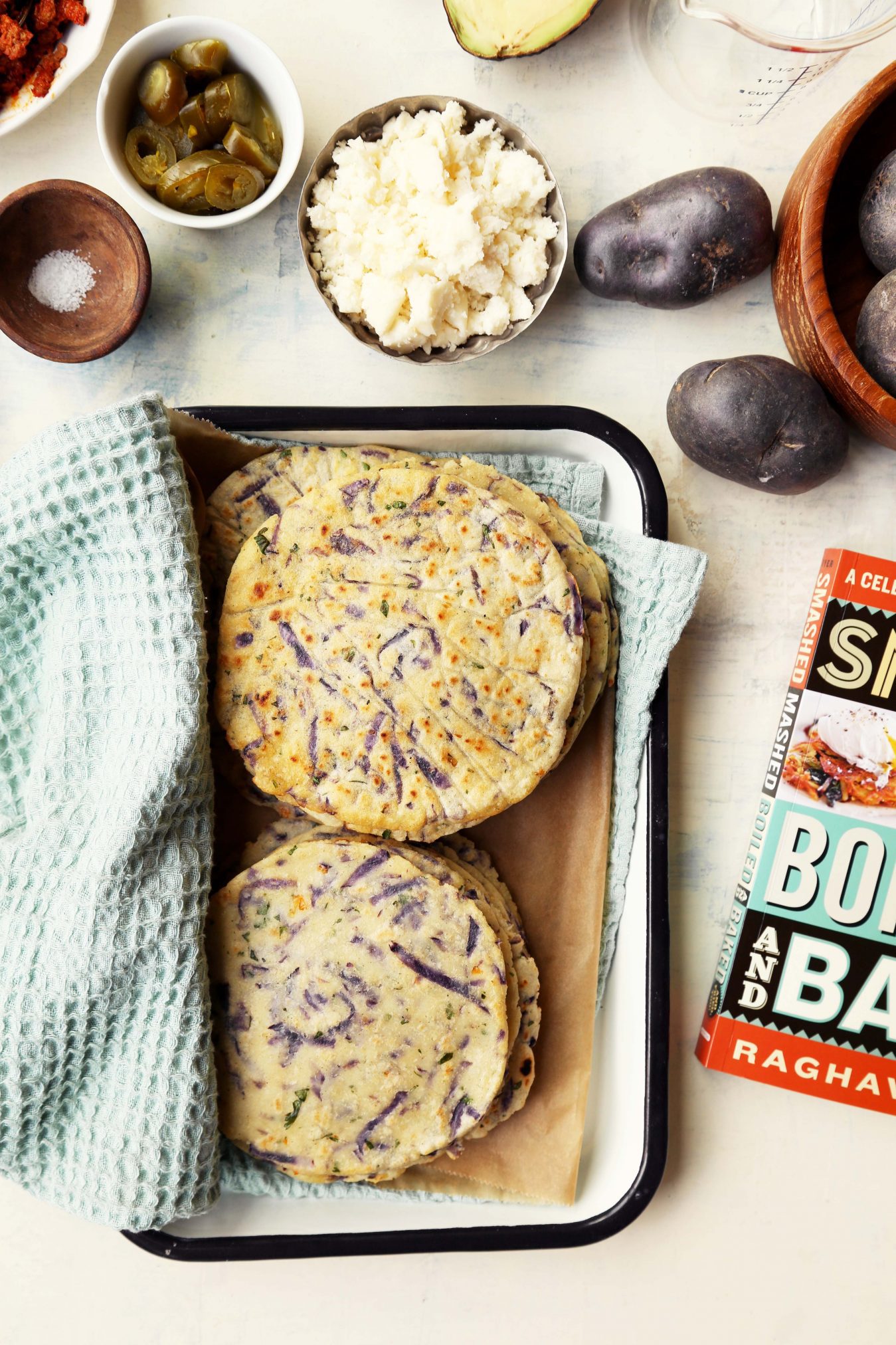 I’ve teamed up with the Idaho Potato Commission, and Workman Publishing to bring you this post for Potato Tortillas. The recipe comes from the cookbook Smashed, Mashed, Boiled and Baked by Raghavan Iyer. It’s a cookbook all about my favorite vegetable, the potato! I’ve mentioned here on several occasions how much I love potatoes, and so it feels only natural that I talk about this potato cookbook. It’s filled with 75 recipes all centered around the spud. Anywhere from appetizers to main dishes and even desserts. I was chosen to make the potato tortillas, which are homemade tortillas that are studded with shreds of purple potatoes, cilantro, and habanero. They’re slightly spicy, but don’t let that deter you because these tortillas need to be the star of your next taco night. There’s no way around it.

We’re hosting a giveaway on Instagram for a chance to win a copy of the book for yourself! If you’re a potato lover like me, then you’re definitely going to want to get in on this. I’ll be posting all the giveaway details on my instagram account so be sure to keep an eye out for the instructions! And last but not least, I couldn’t just give you a recipe for tortillas without giving you a recipe for something to go inside those homemade tortillas. I decided to fill them with crispy potatoes and chorizo, because potato on potato (like a potato inception) just sounded so right to me. 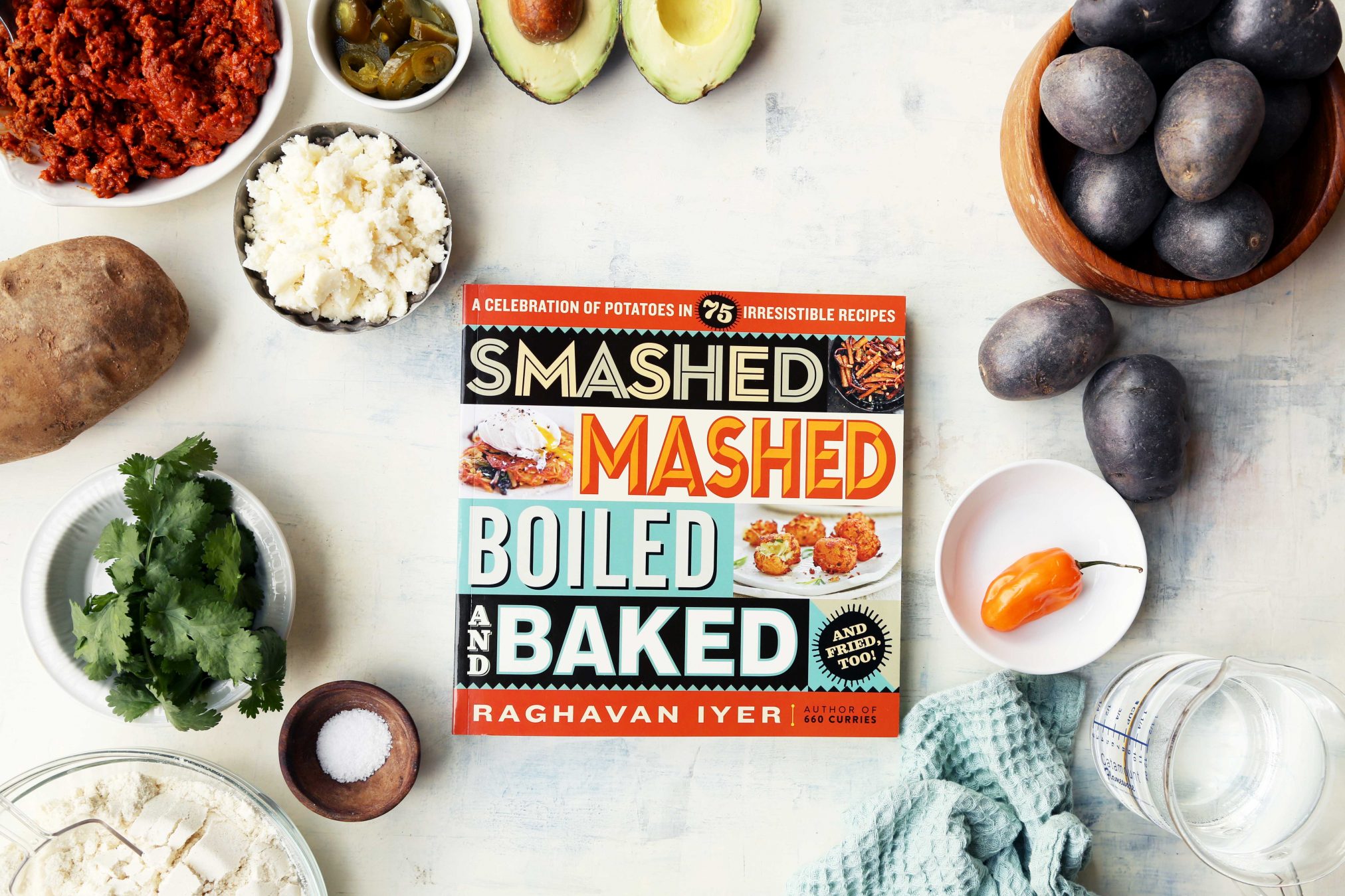 The first thing we have to do is get the potatoes ready, because this is a potato cookbook after all. Wash your purple potatoes well, and then grate them with a box cheese grater into a bowl of cold water. Let the potatoes sit in the water for about 10 to 15 minutes to remove any excess starch.

**Note: There’s no need to peel the potatoes before you grate them because the skin on purple potatoes is thin!** 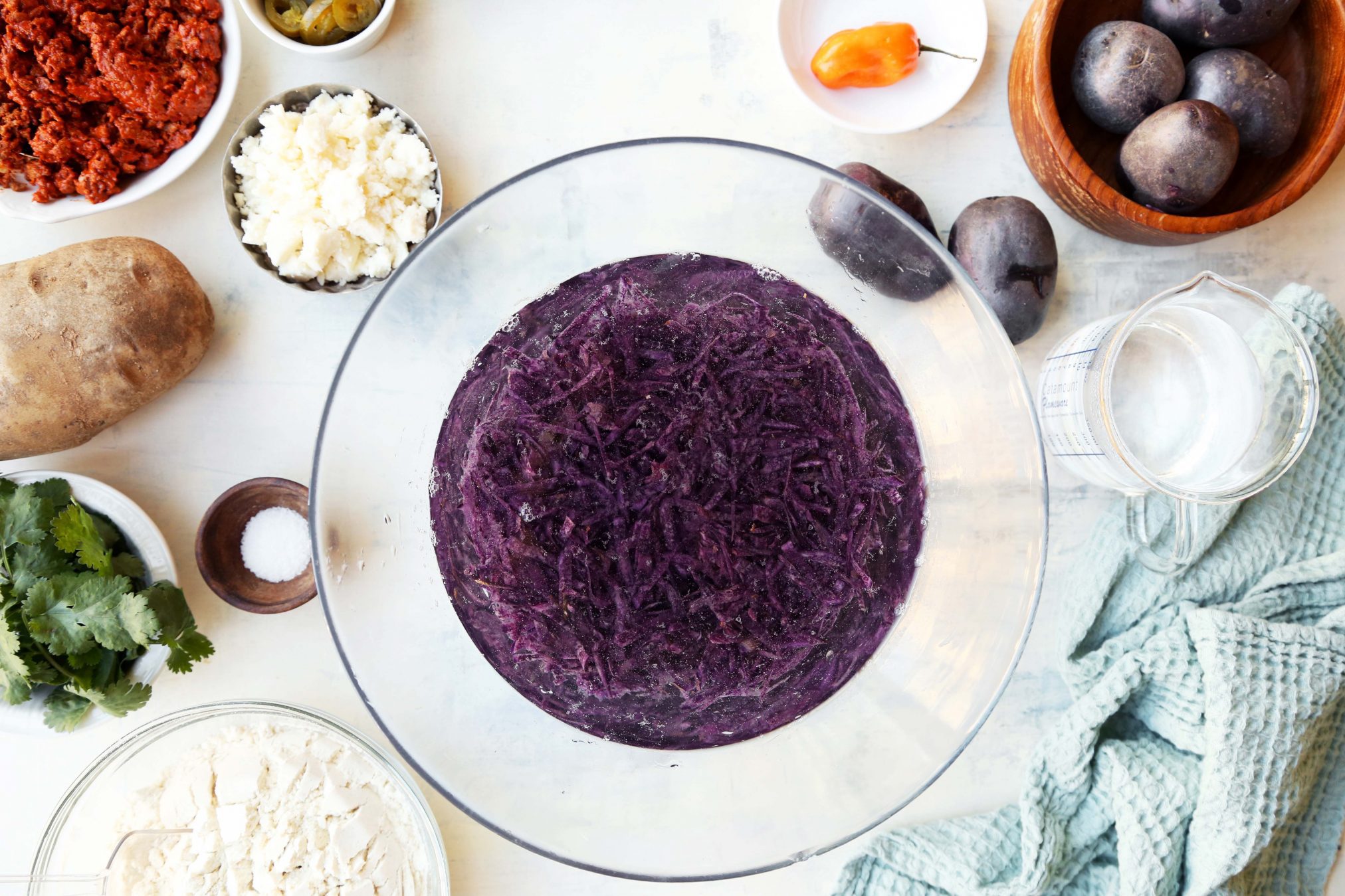 In the meantime, combine the masa harina in a large bowl with the cilantro, salt and chopped up habanero. I know what you’re thinking, HABANERO?! That’s gonna be spicy! It’s actually not that spicy, I promise. You can add half of it if you’d like to manage the heat or switch it out for a jalapeño instead.

**Note: Masa harina can be found in the flour section of the grocery store. It’s a prepared corn flour that is used to make tortillas!** 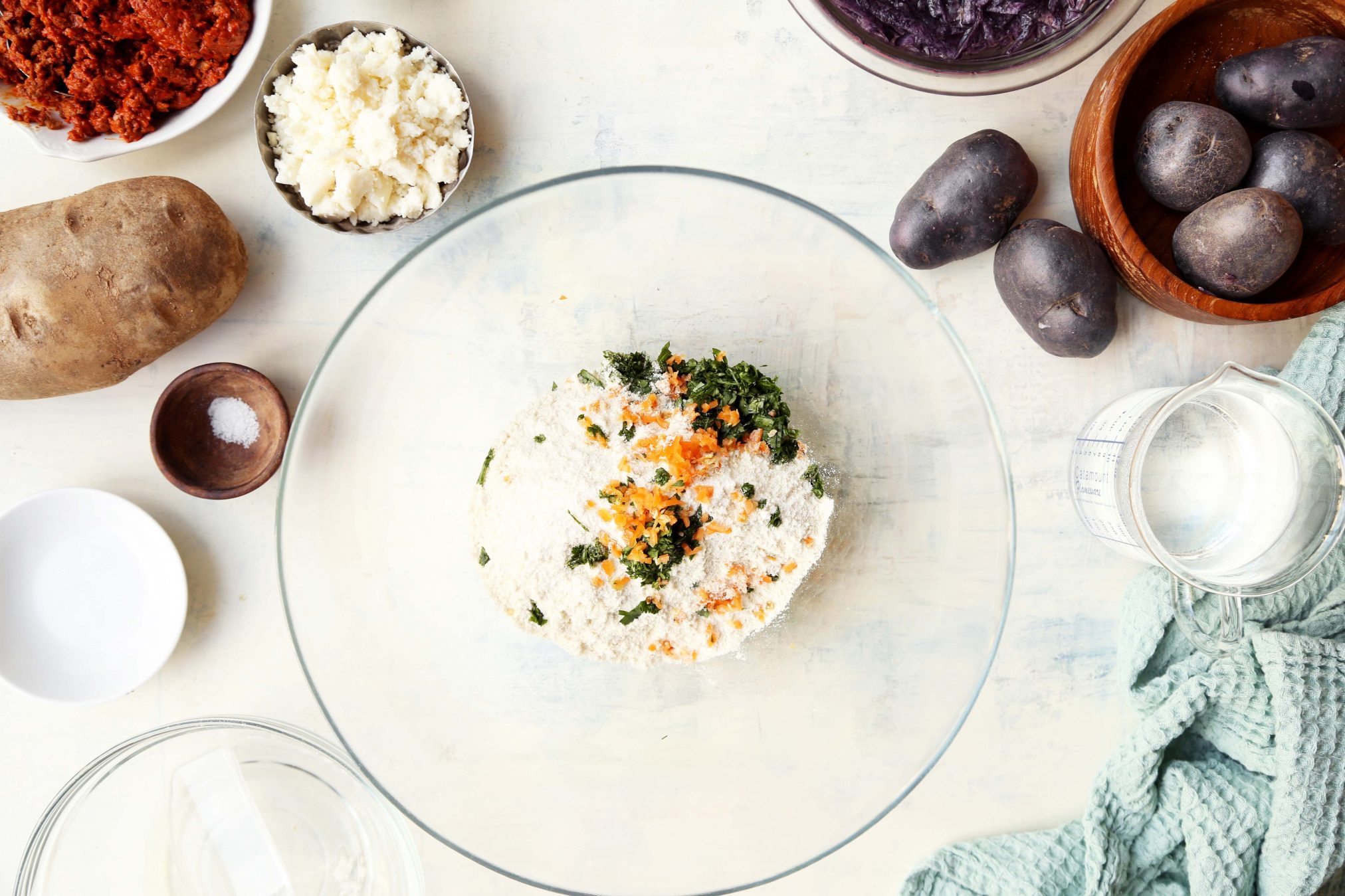 Drain the shredded potatoes and then rinse them under cold water to really wash off that starch. Then add it to the bowl with the other ingredients and stir in the warm water. This mixture works better with warm water because it makes it easier to stir. 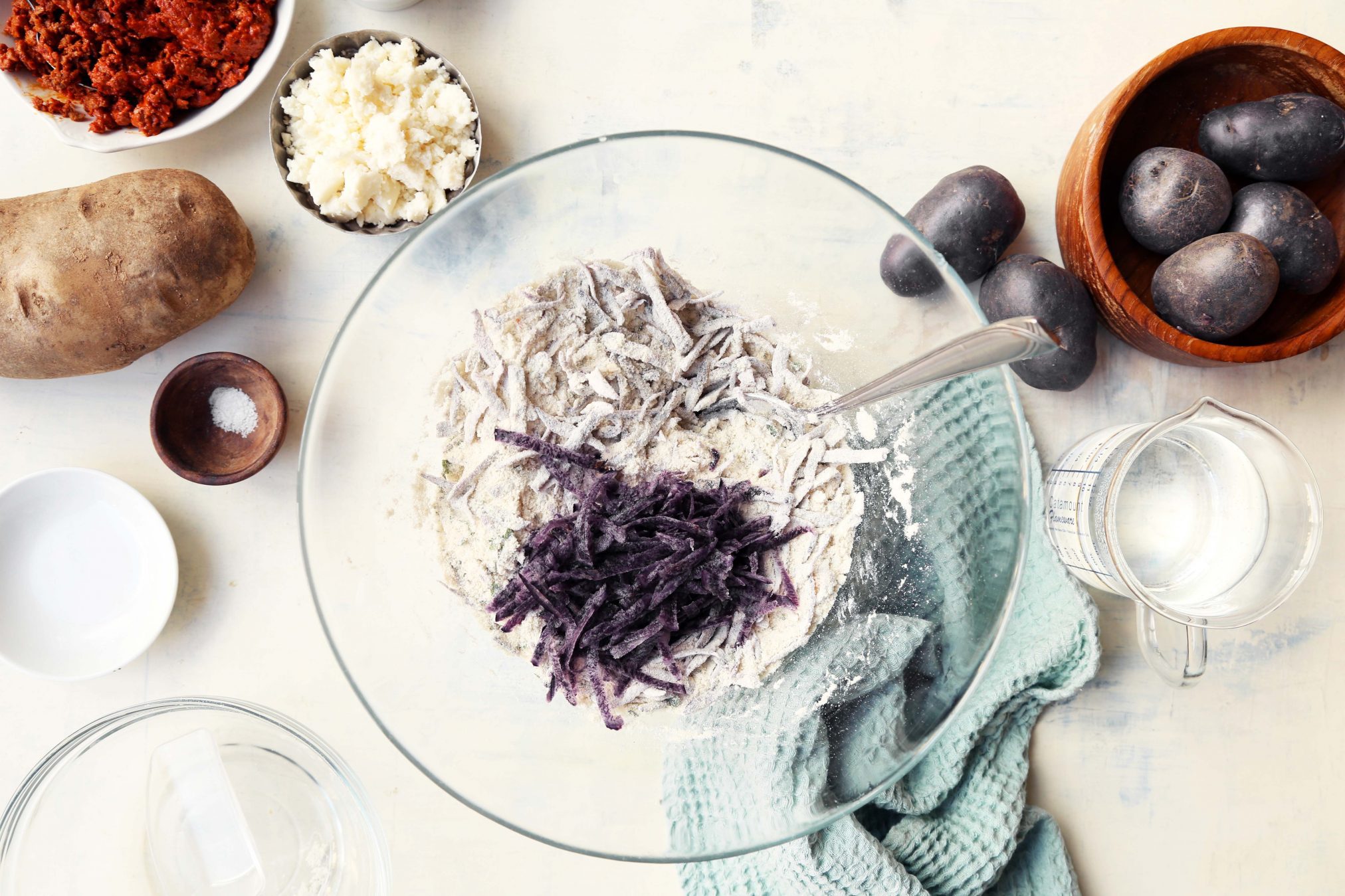 **Note: If the dough is too dry, mix in a little bit more warm water as needed until the desired consistency is reached. It should feel like a slightly softer play dough.** 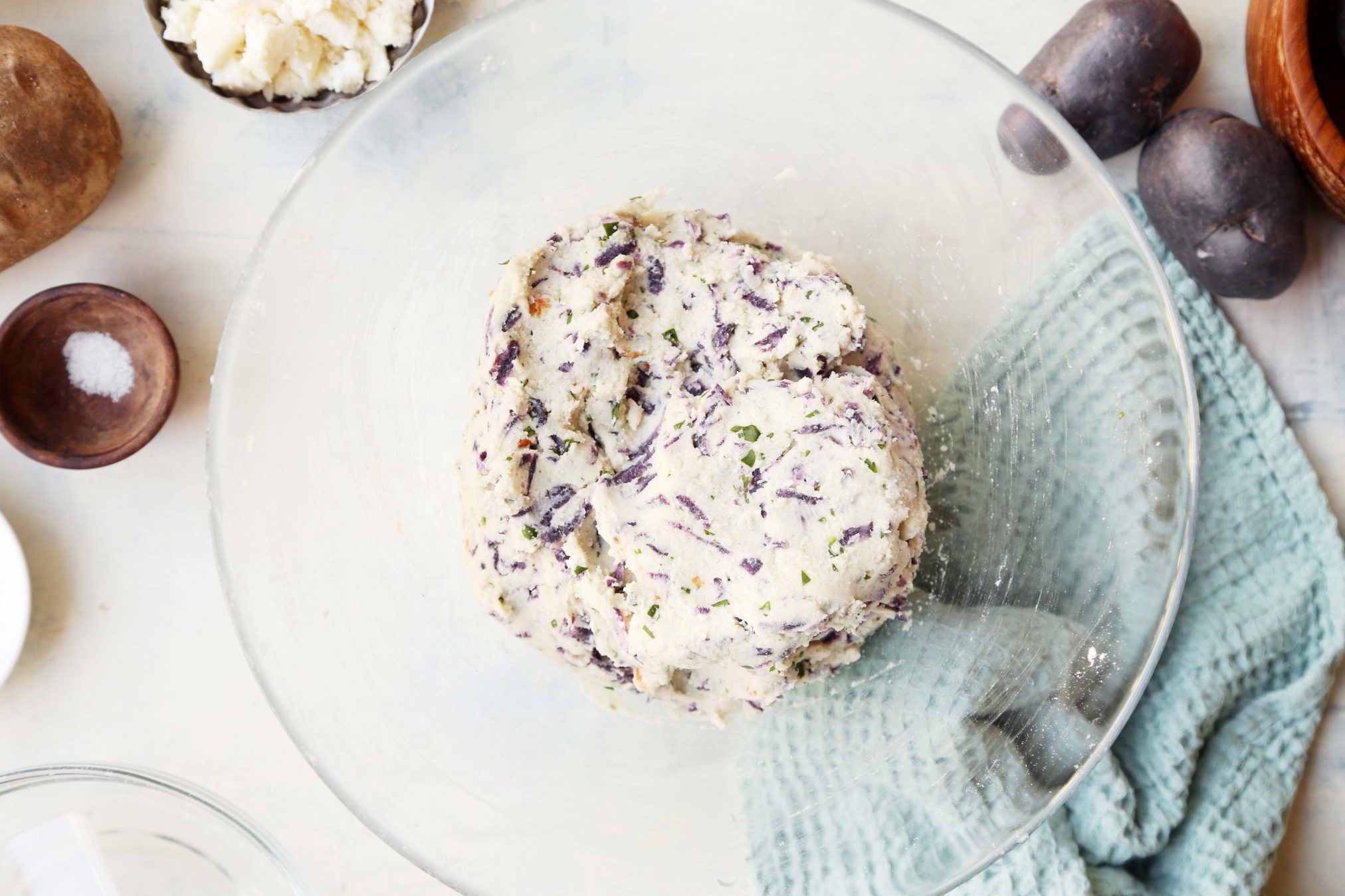 Divide the dough into 16 equal portions and then roll out each portion into a ball. They should be slightly smaller than a golfball. But you can make these was big or as little as you’d like, depending on what size you’d like to make them. 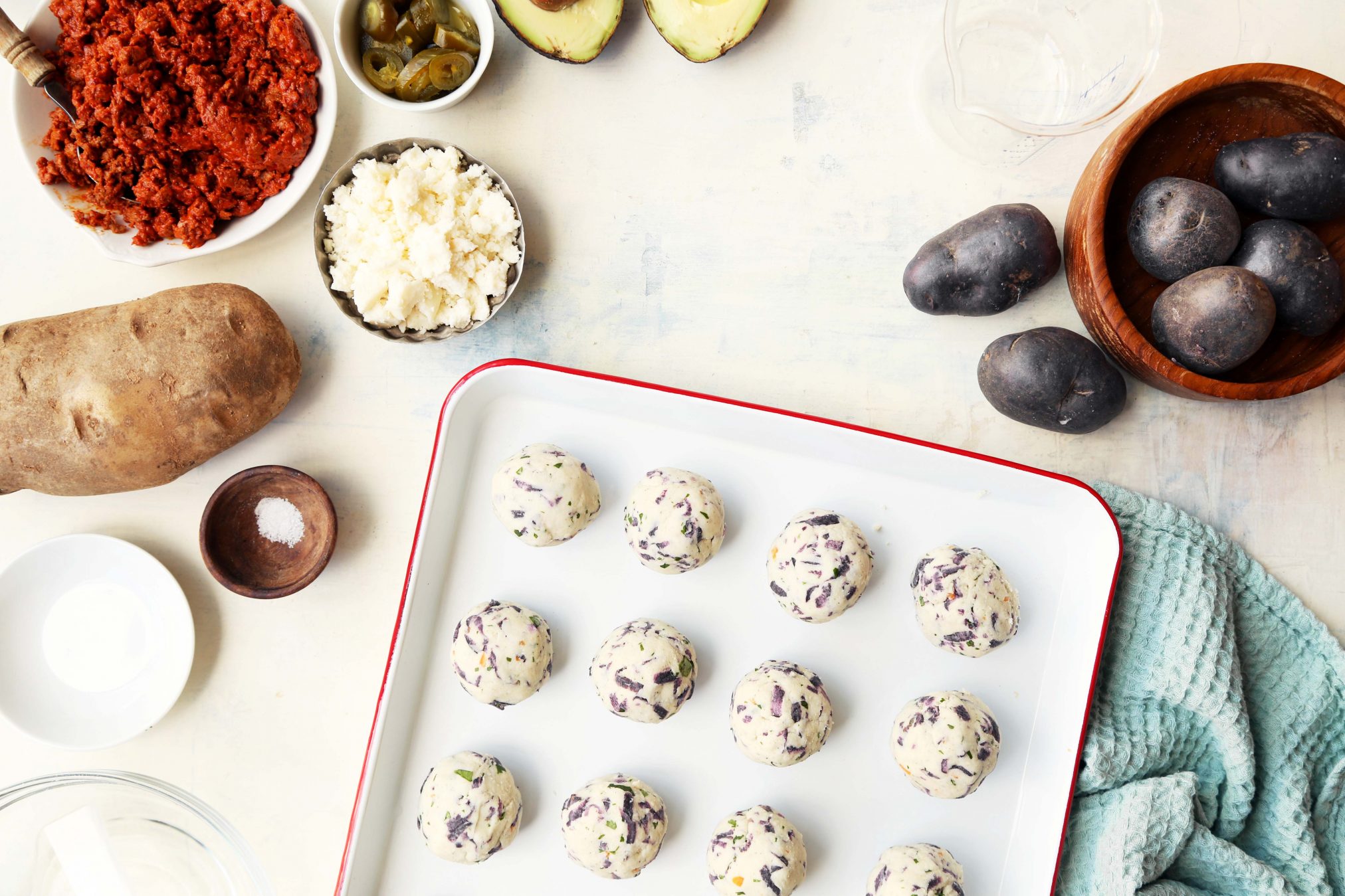 Keep the balls of dough covered with a damp kitchen towel or wet paper towels to keep them from drying out. Then place a piece of parchment paper on a surface. Set a ball in the center and then place another piece of parchment paper on top of that. Using a large plate or skillet, press down as firm as you can to flatten it out into a thin tortilla. 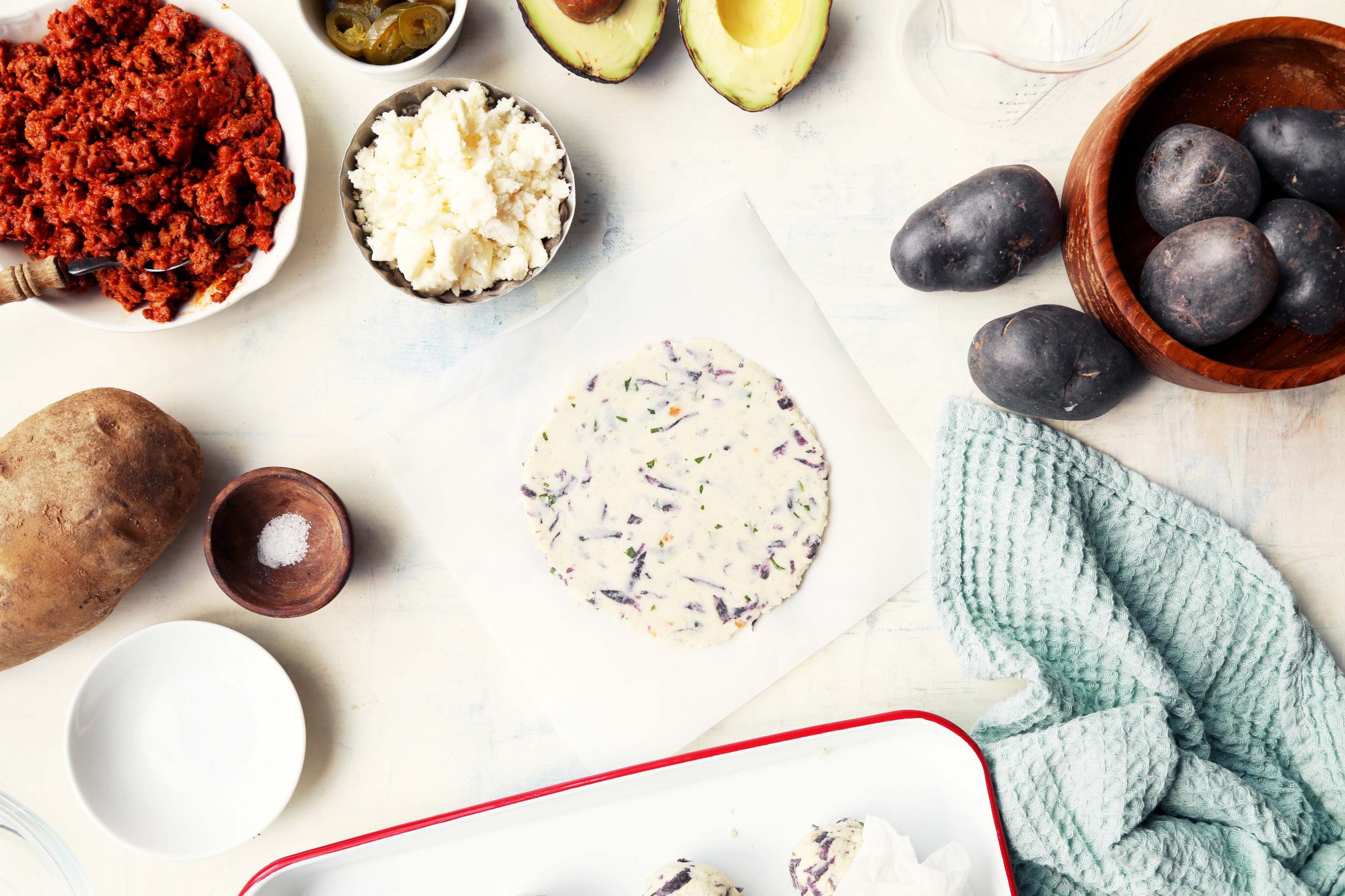 Place the tortilla on a preheated cast iron skillet, lightly greased with a little bit of oil, and cook for about 3 to 4 minutes or until browned on the first side. Flip over and continue to cook for about 1 to 2 minutes on the second side. Transfer the tortilla to a plate or platter and keep covered with a clean kitchen towel. Continue flattening the tortillas and cooking as directed.

**Note: It’s important to keep the cooked tortillas warm with the kitchen towel because the steam will allow the tortillas to become pliable when you go to eat and fill them.** 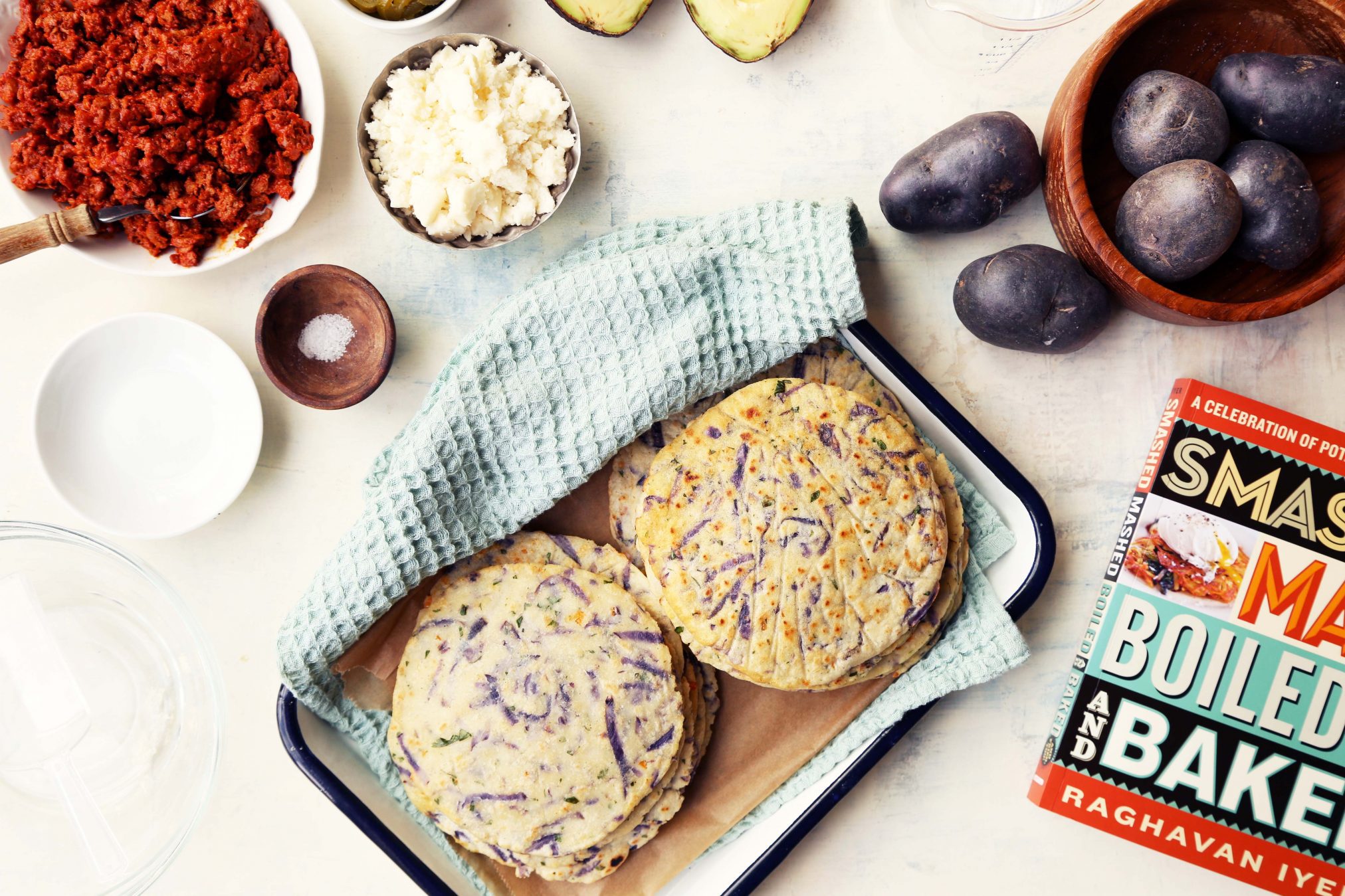 Once all the tortillas are cooked, you can eat them warm or you can let them cool and store in the fridge in an airtight container or large zip-top bag until ready eat. To prevent the tortillas from sticking to each other, store them with a piece of wax paper in between each.

**Tip: To rewarm the tortillas you can place them in a dry skillet over medium-high heat and cook on both sides until warmed through and pliable once more.** 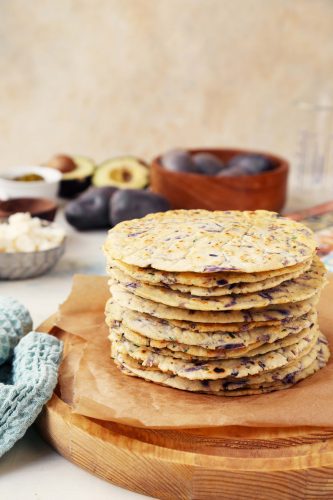 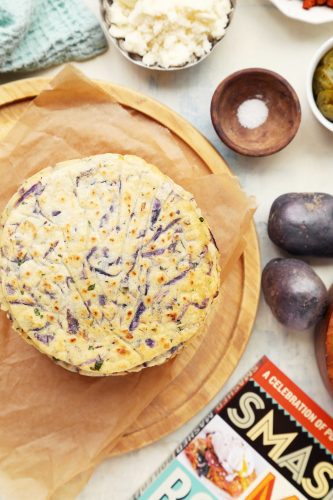 I couldn’t just give you a recipe for tortillas though without giving you a recipe for tacos. You made these tortillas and now you have to fill them! I like the idea of inception for these tacos so we’re filling the potato tortillas with potatoes as well. It’s the only way. Cook some potatoes in a skillet with olive oil until crispy, browned and cooked through, about 15 to 20 minutes.

**Note: I used Russet potatoes for this. I rinsed two medium potatoes, peeled them and diced them into a small dice. Keep the potatoes moving so that they don’t burn or stick.** 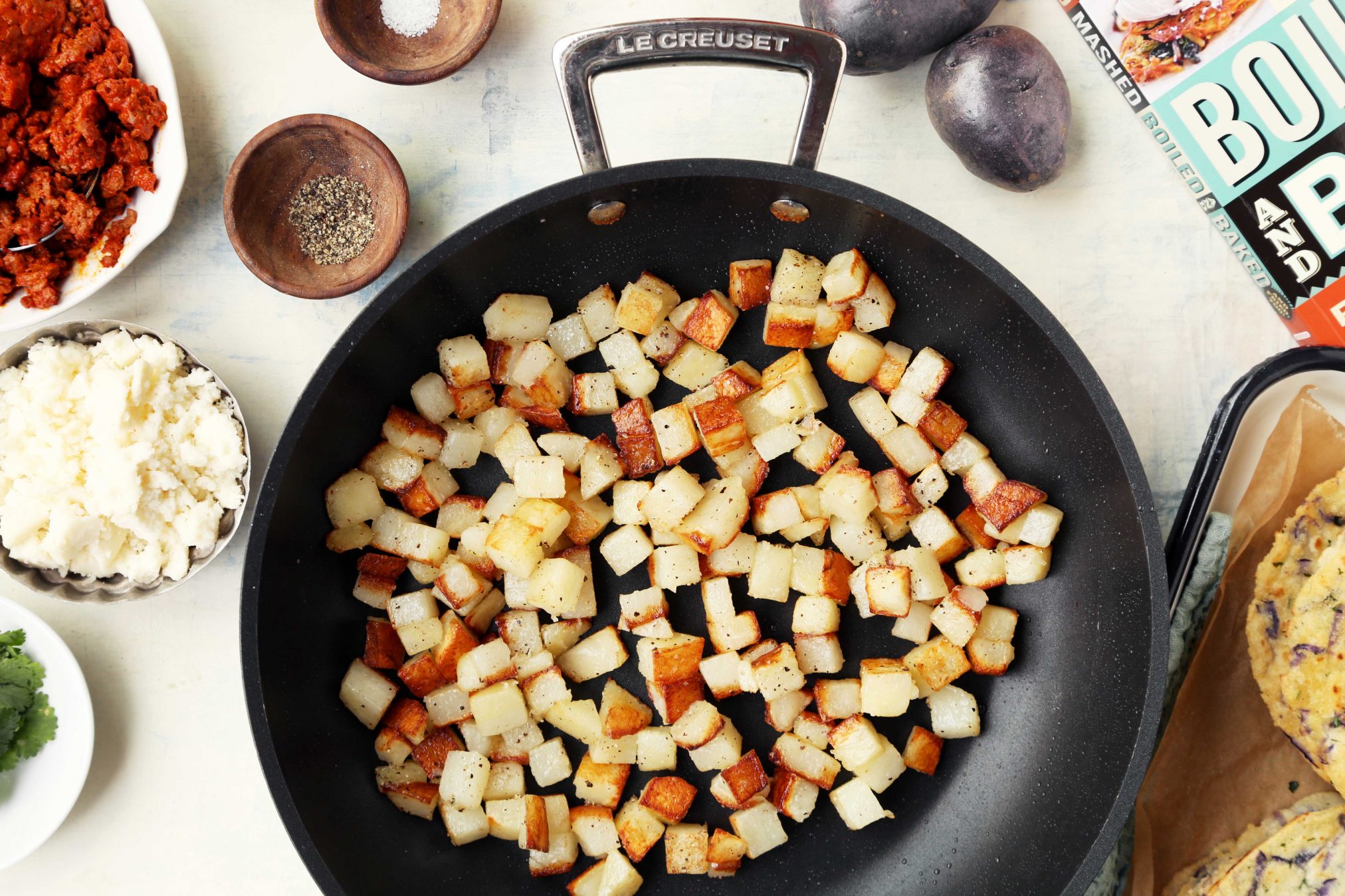 Add a package of soyrizo into the potatoes and cook until the soyrizo has cooked through. Add this stage you can also add in scrambled eggs to the mixture and cook until the eggs are no longer runny. That would be a great addition if you’d like!

**Note: I love chorizo but sometimes I feel like the regular chorizo is too heavy and greasy. So I always use soyrizo instead because you get all of the flavor, but without that heaviness.** 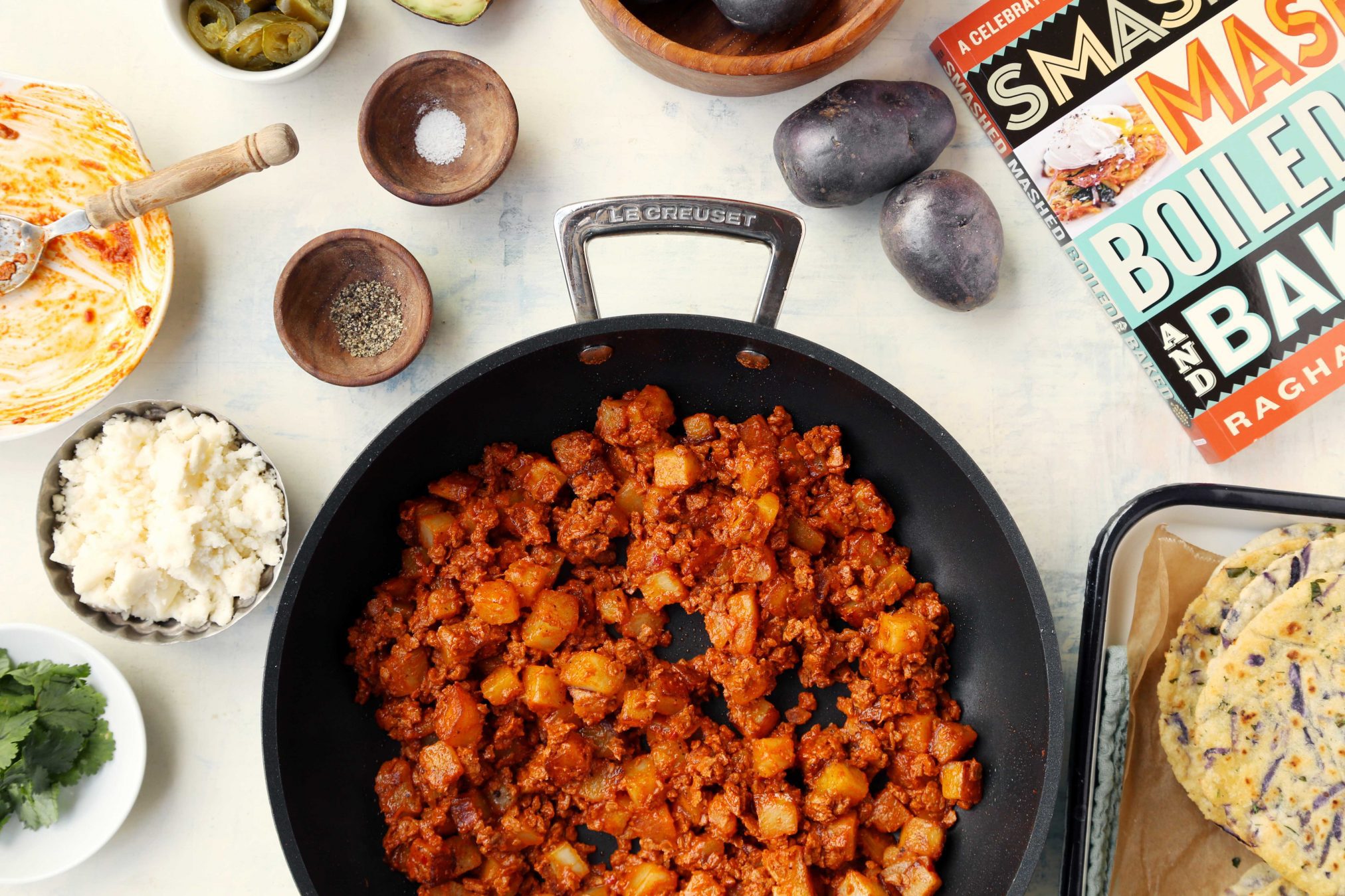 Fill the tortillas with the potato and chorizo filling and then top with avocado, cilantro, pickled jalapeños, and crumbled queso fresco.

**Note: Queso fresco is a fresh Mexican cheese that you can find in almost any grocery store nowadays. If you can’t find it, feta would be a good substitute. Or you can use cotija cheese instead or even pepper jack.** 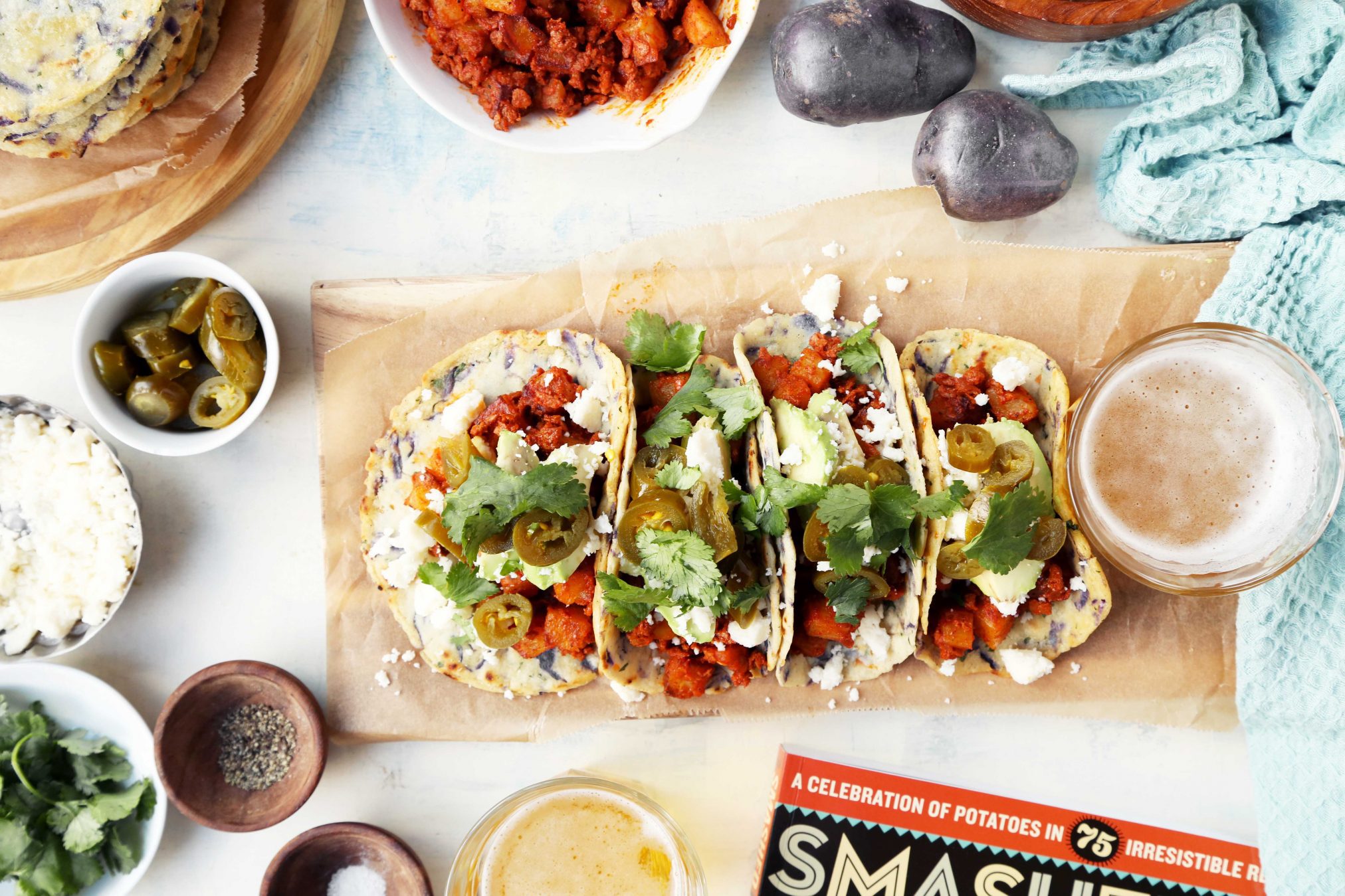 The tortillas are really the star of the show, so I wanted a filling that was simple to make and not over the top. Feel free to fill the tacos with whatever you like or have on hand. Anything is possible! 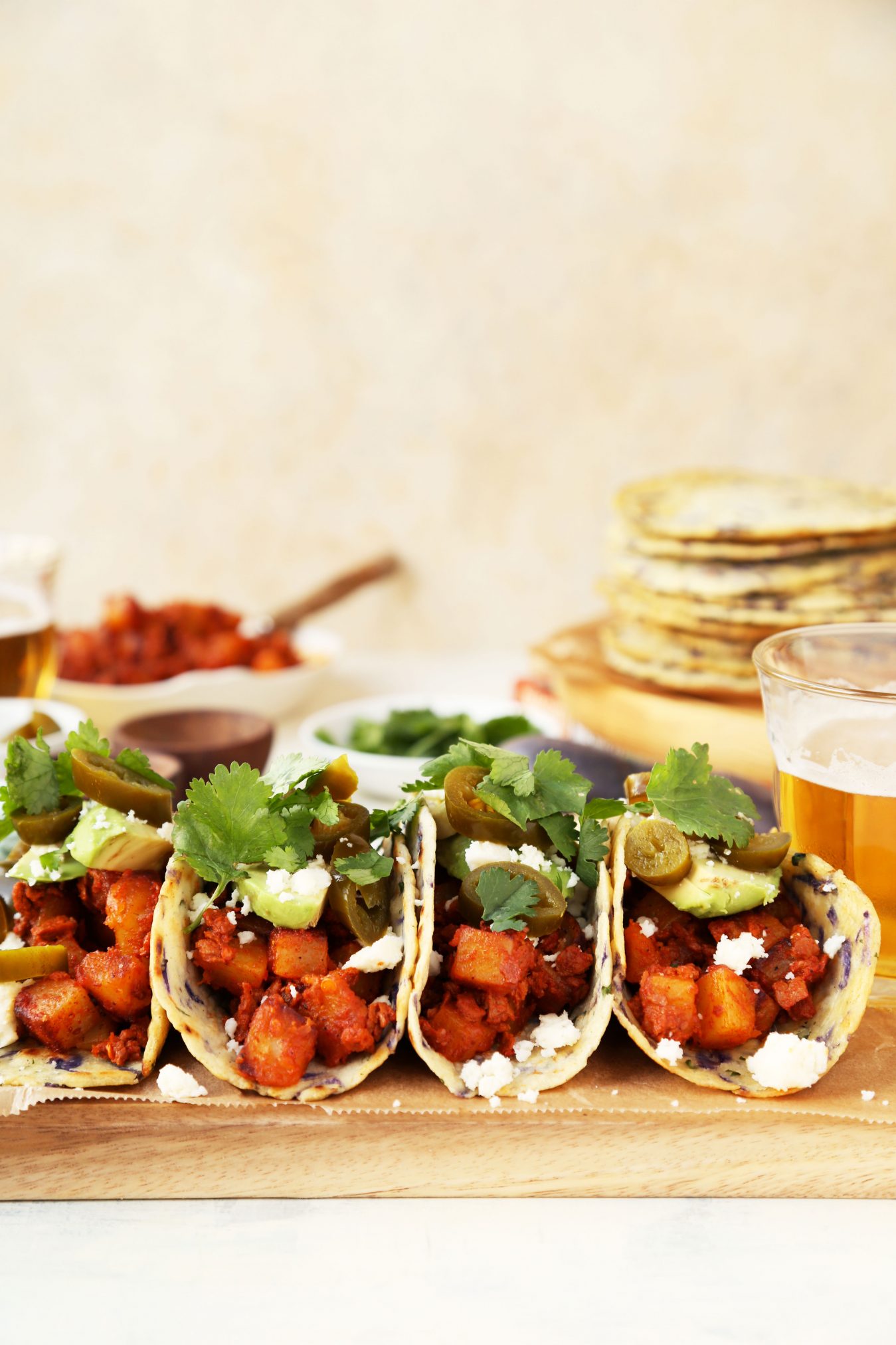 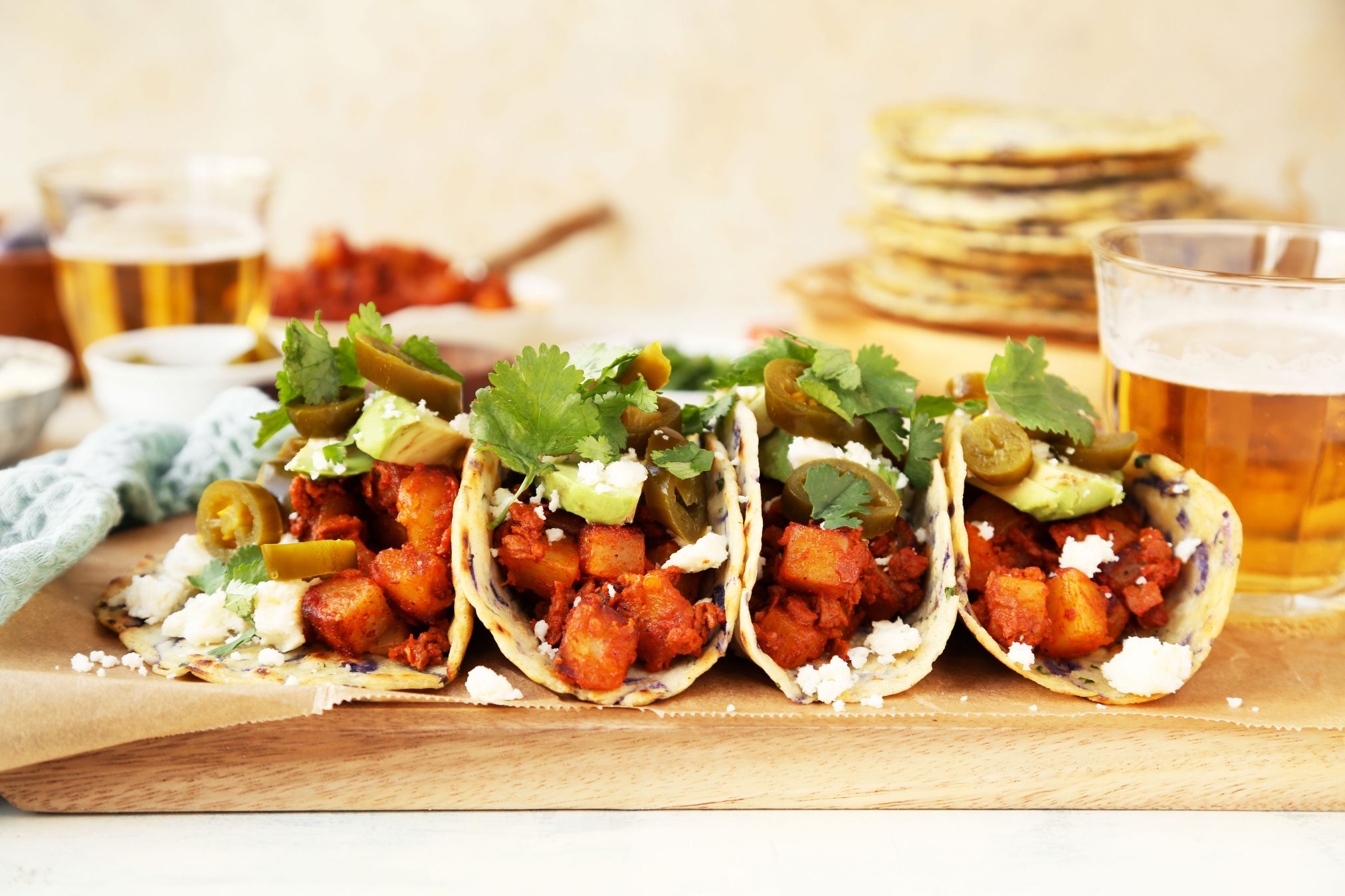 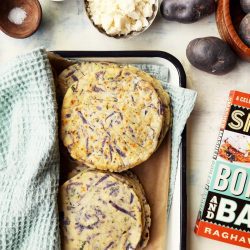 Print
Prep time
20 mins
Cook time
20 mins
Total time
40 mins
These Potato Tortillas are from the Smashed, Mashed and Baked cookbook! They're tortillas made with purple potatoes, cilantro and just a tiny bit of spice!
Author: The Candid Appetite
Serves: about 16 tortillas
Ingredients
For Tortillas
For Tacos
Instructions
3.5.3226