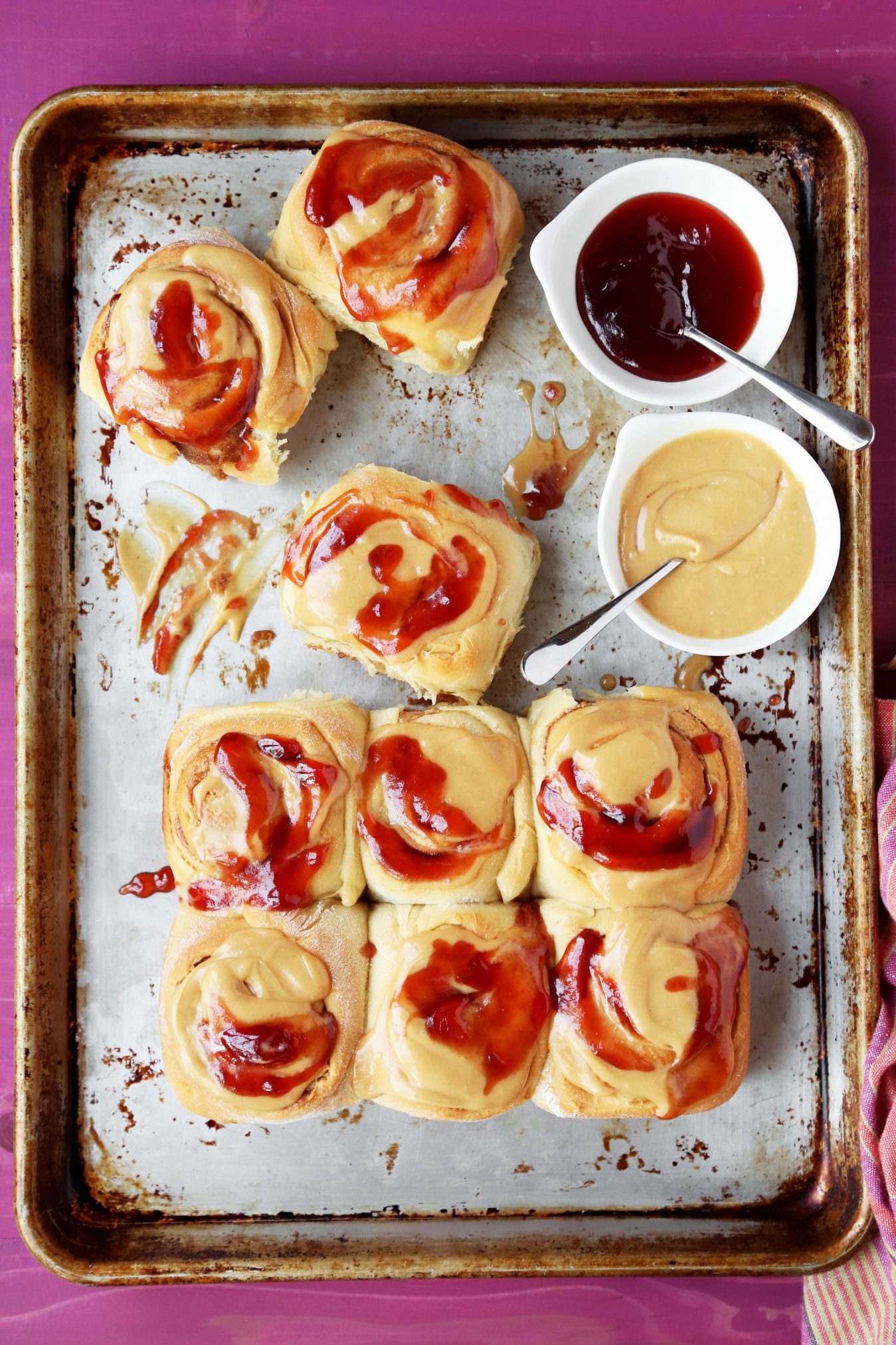 I’m continuing my Cinnamon Roll Week on the blog as promised with these decadent PB&J Cinnamon Rolls that can most definitely do overtime as breakfast, dessert, or even a snack. Earlier in the week I shared a recipe for savory Garlic Bread “Cinnamon” Rolls that were completely out of the box but something that you just have to try for your next pasta night dinner at home because they’re fun and exciting. After all, don’t we all deserve a little more fun and excitement in our lives on a regular basis? Anyhow, back to these PB&J rolls. Picture your childhood school lunches of peanut butter and jelly sandwiches. Do you remember how awesome they were even though they were all mushed up, on white processed bread and something you probably wouldn’t eat now? Well these rolls are exactly like those sandwiches we used to love, but so much better because white mushy bread isn’t involved. The homemade dough is flavored with peanut butter, filled with more peanut butter, and strawberry jelly, and then topped with even more peanut butter (I know, the madness never ends) and more jelly. It’s like a child’s dream come true in cinnamon roll form and it’s just in time for the weekend. Add them to your weekend to-do list and enjoy your new favorite treat. 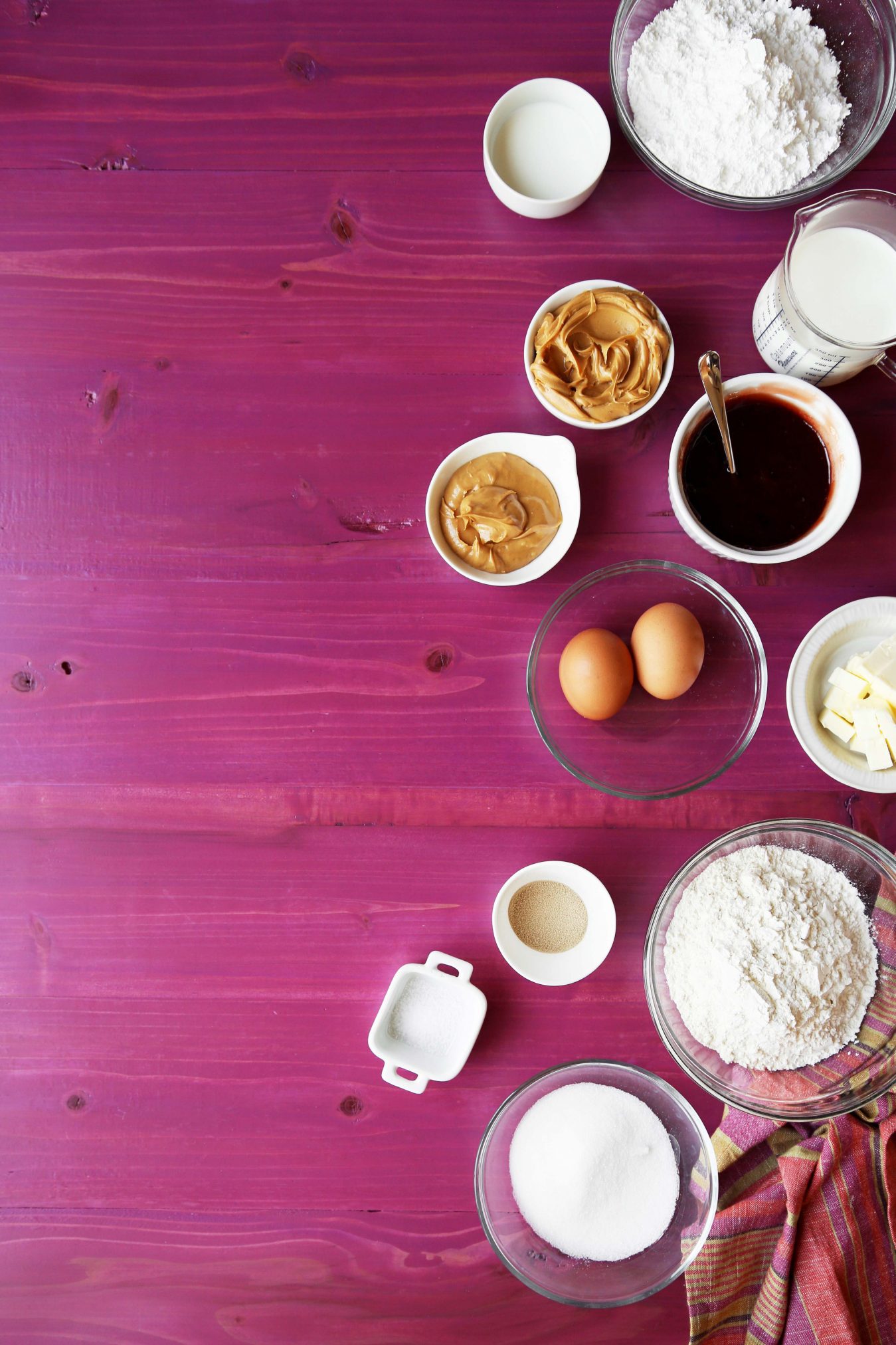 The first thing we need to work on is warming up the milk and butter to proof the active dry yeast. So In a medium saucepan, combine the milk, sugar, salt and butter and set over low heat just until the milk has warmed to about 120 degrees and the butter has just started to melt. 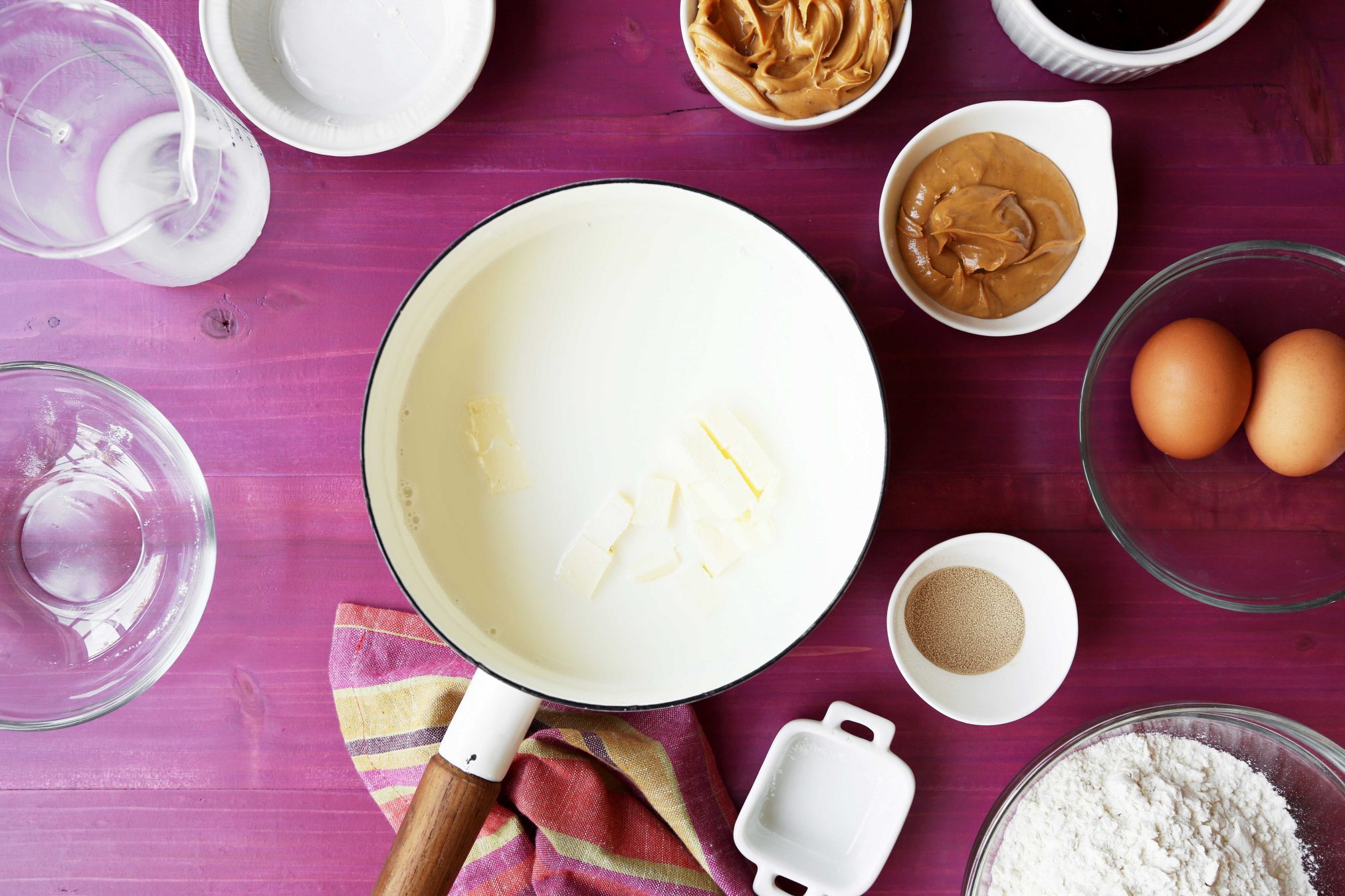 In the bowl of a stand mixer, combine the 1 1/2 cups all-purpose flour with 1 packet of active dry yeast. You don’t want instant yeast for this. Although, you might want to use a “rapid rise” yeast if you’re in a hurry; it’ll cut the rise time in half. 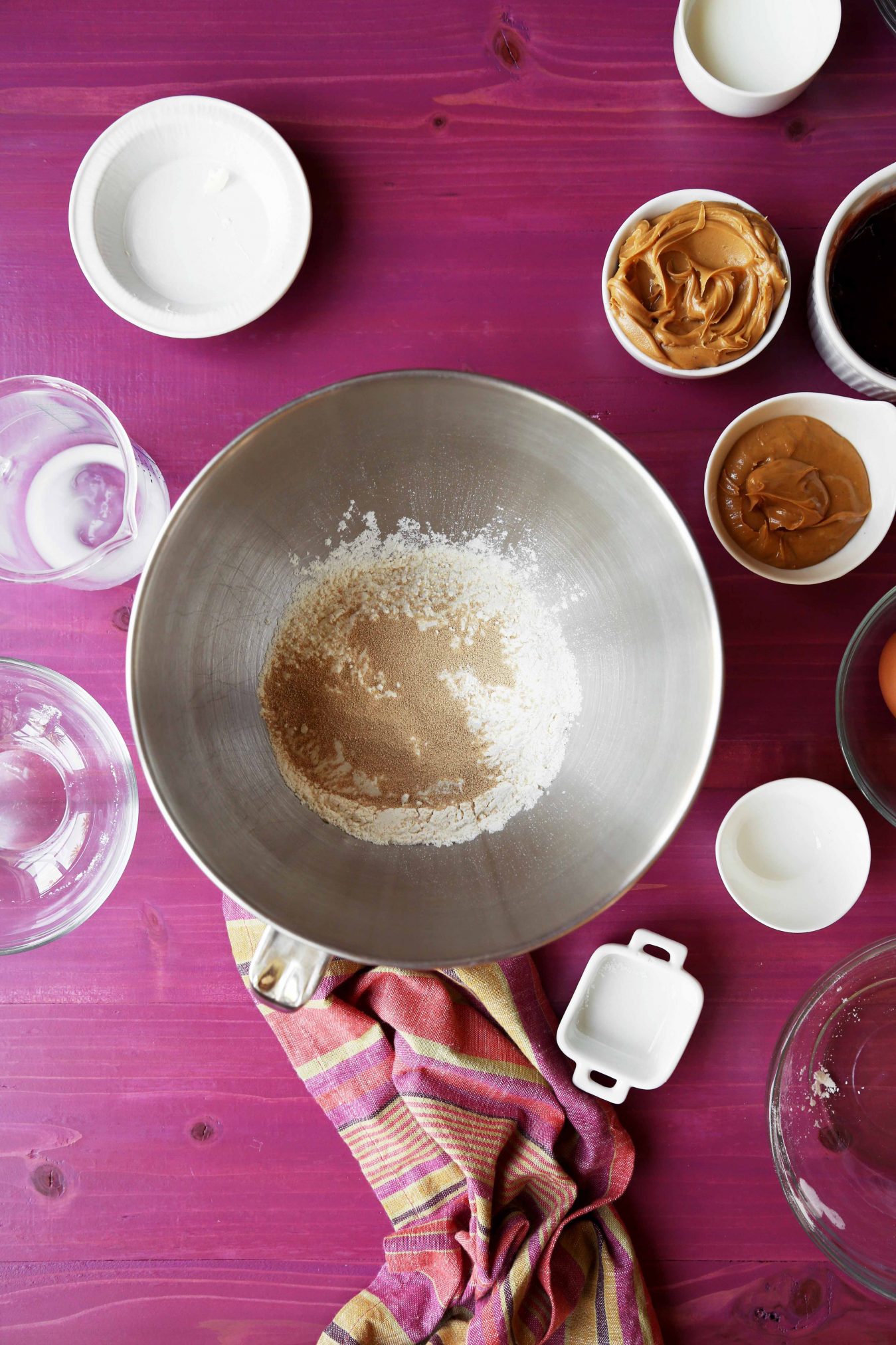 Pour the warmed milk/butter mixture in, along with the eggs and peanut butter. Mix on low until the mixture is smooth, then start adding the remaining flour a bit at a time until it’s all been used and the dough comes together and pulls away from the sides. Knead on high for about 5 minutes.

**Note: Keep in mind that the dough will be sticky, but it should be soft to the touch. If you find that the dough is way too sticky and doesn’t pull away from the sides, then add a bit more flour, a tablespoon at a time, until the desired consistency is reached!** 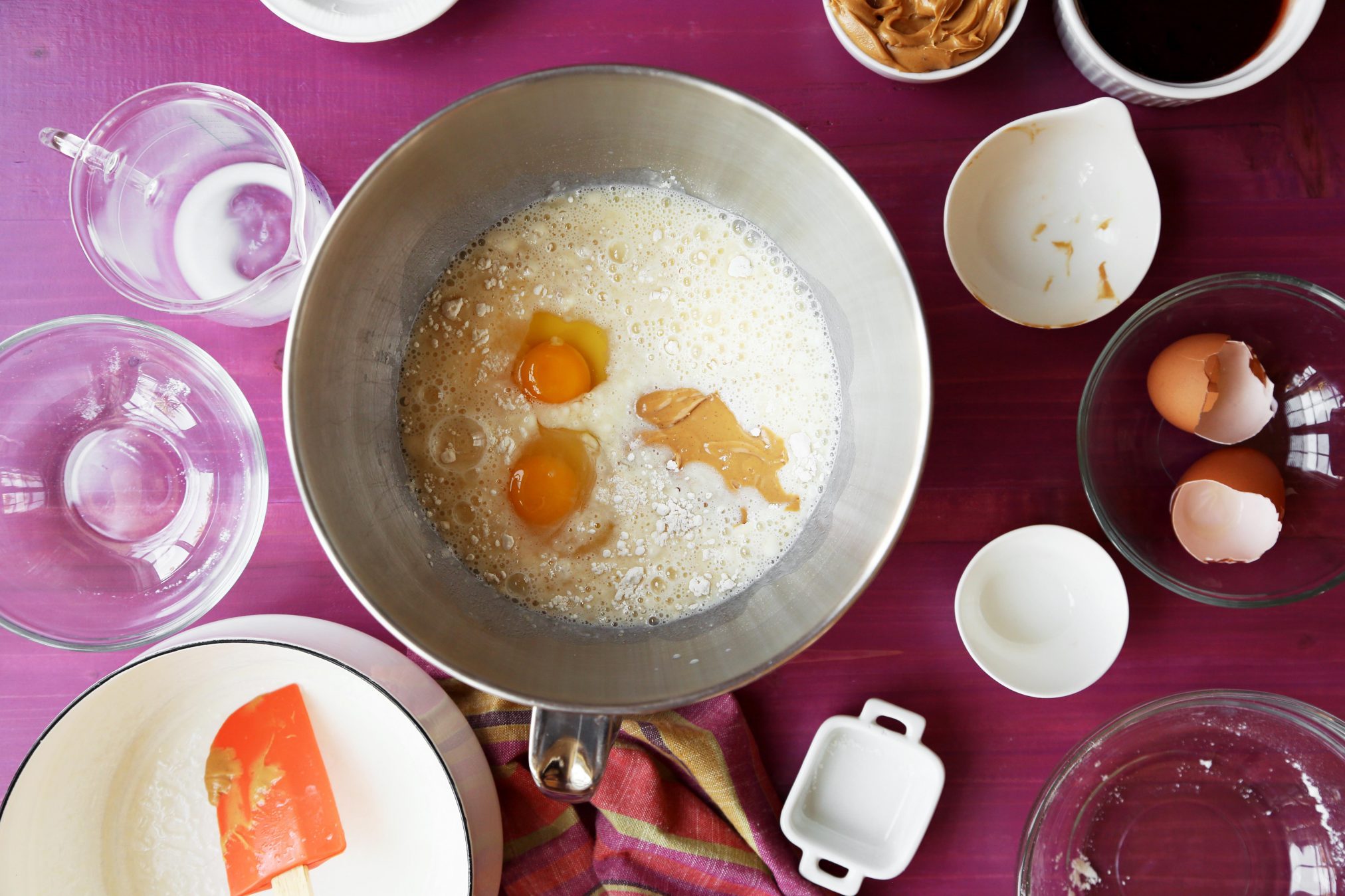 Shape the dough into a ball and transfer to a bowl that has been greased with either, oil, butter or cooking spray. Turn it over to coat both sides of the dough. Cover loosely with plastic wrap and a damp kitchen towel and let rest in a draft-free warm spot until doubled in size, about 1 hour. 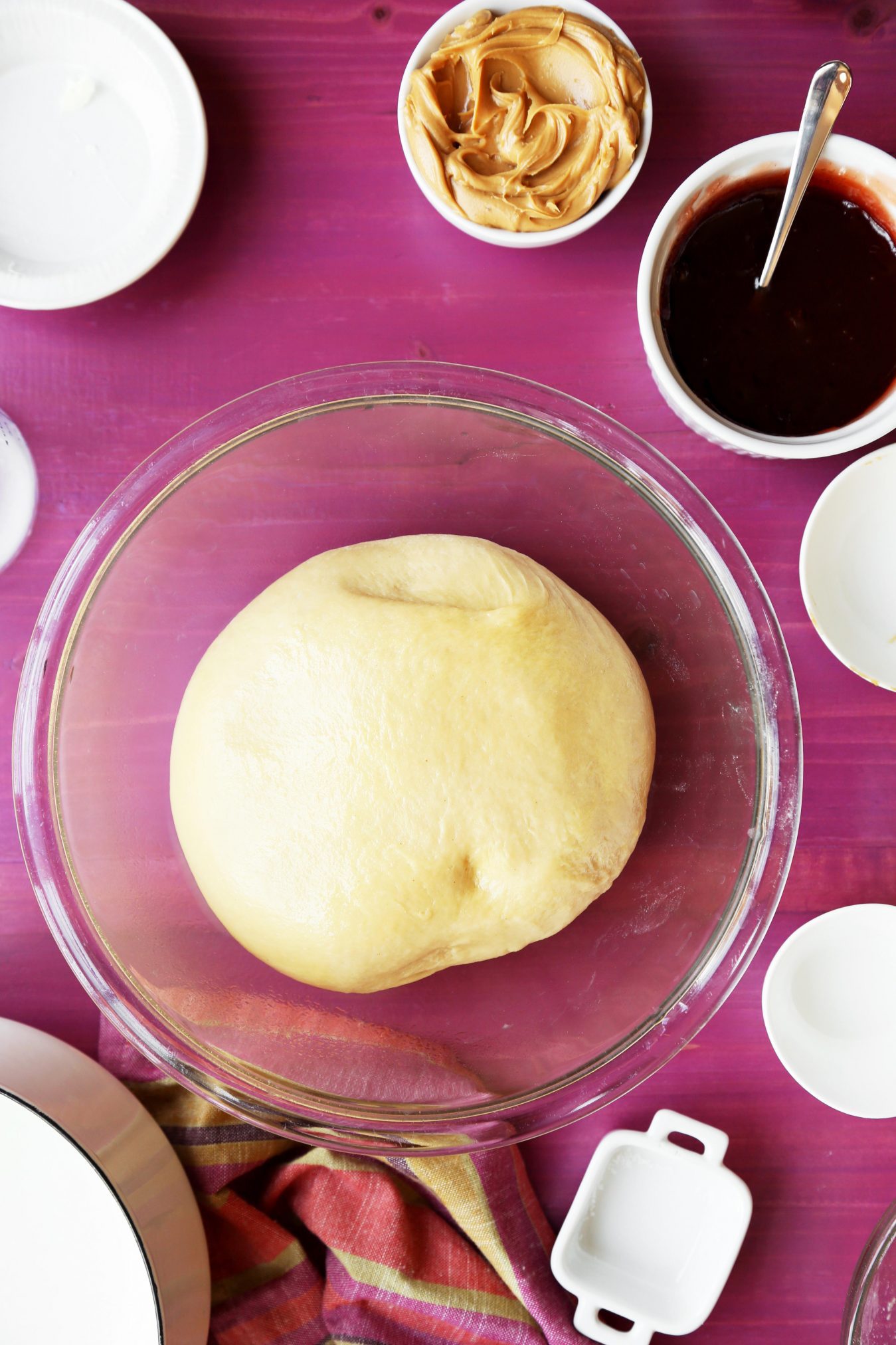 Once dough has risen, punch down and transfer to a well-floured work surface. Roll out into a large rectangle about 1/4-inch thick.

**Tip: I find that with recipes like this we get too bogged down on precise measurements of the dough, but really that doesn’t matter with cinnamon rolls. All that matters is that it’s a large rectangle in shape 1/4-inch thick. I promise.** 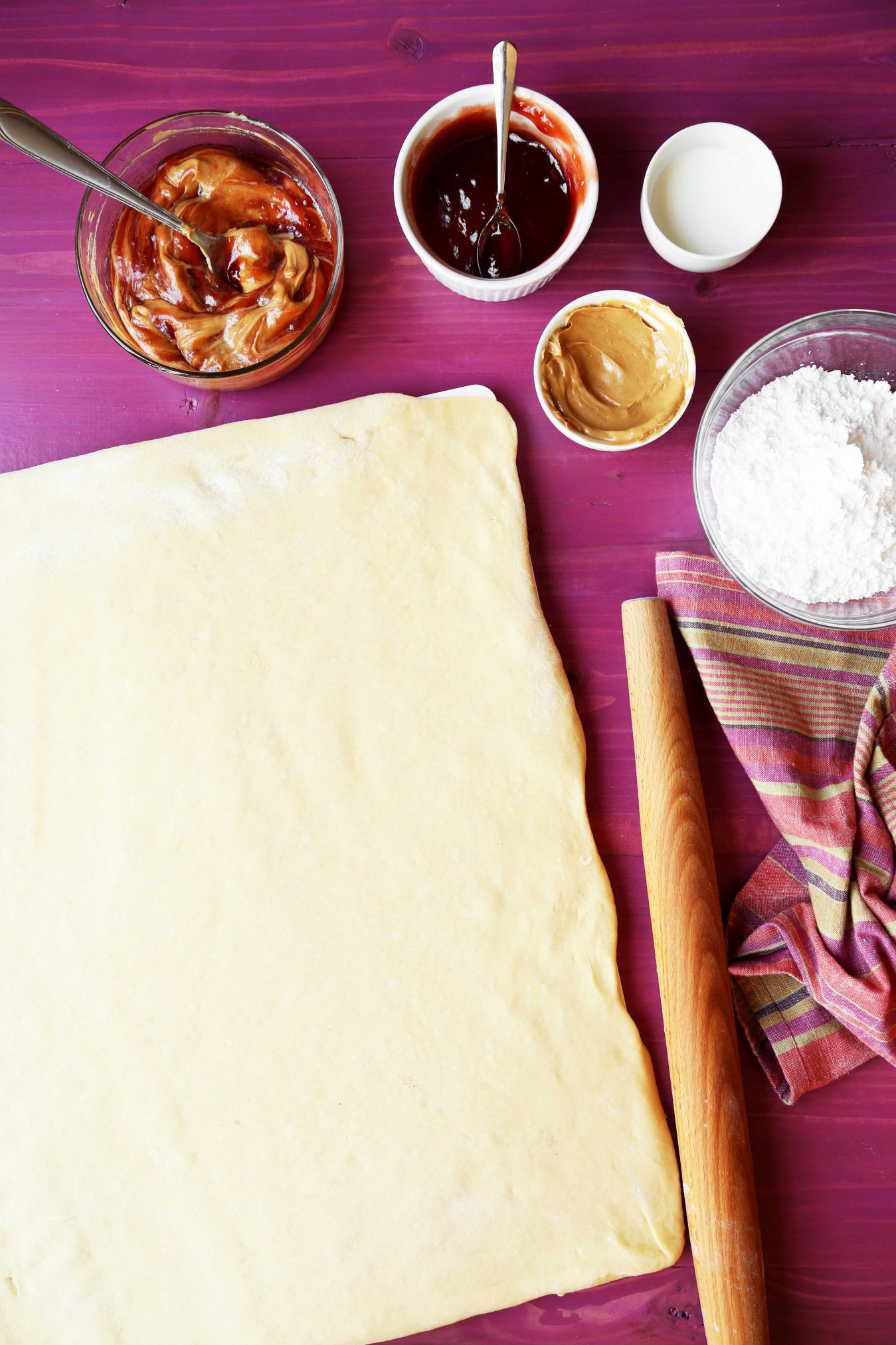 In a small bowl, stir together the peanut butter and melted strawberry jelly. Don’t mix it until well incorporated. You want some streaks of jelly peaking through the peanut butter. Then spread it over the rolled dough in an even layer, leaving about 1-inch of dough (on the long side) free of filling.

**Tip: You don’t want to use fresh organic all natural peanut butter for this because it won’t bake properly. This is the time for the kind of peanut butter we had as kids in plastic tubs that doesn’t have to refrigerated. You also want it to be smooth because chunky won’t spread out evenly. As for the jelly, you can use grape or raspberry, just make sure it’s seedless jelly or jam. I used strawberry because it’s my favorite!** 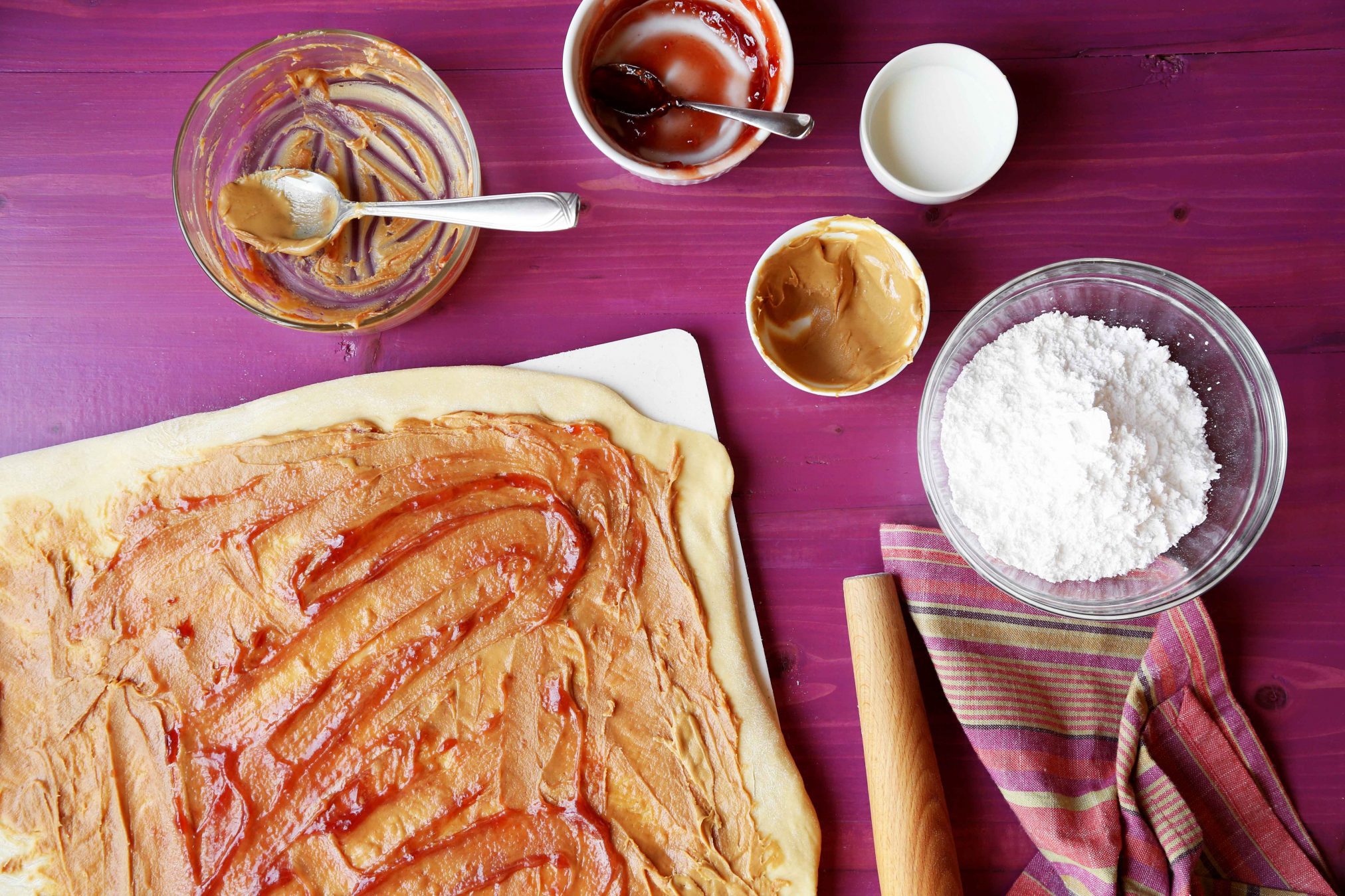 Roll the dough, lengthwise, into a tight log or rope, making sure to pinch the seam to seal it as best you can. Trim off the very ends on either side, and then cut into 12 even slices. Place on a greased 9 by 13-inch baking pan. Cover loosely with a plastic wrap and a damp kitchen towel and let rise in a draft-free spot until doubled in size, about 30 minutes. 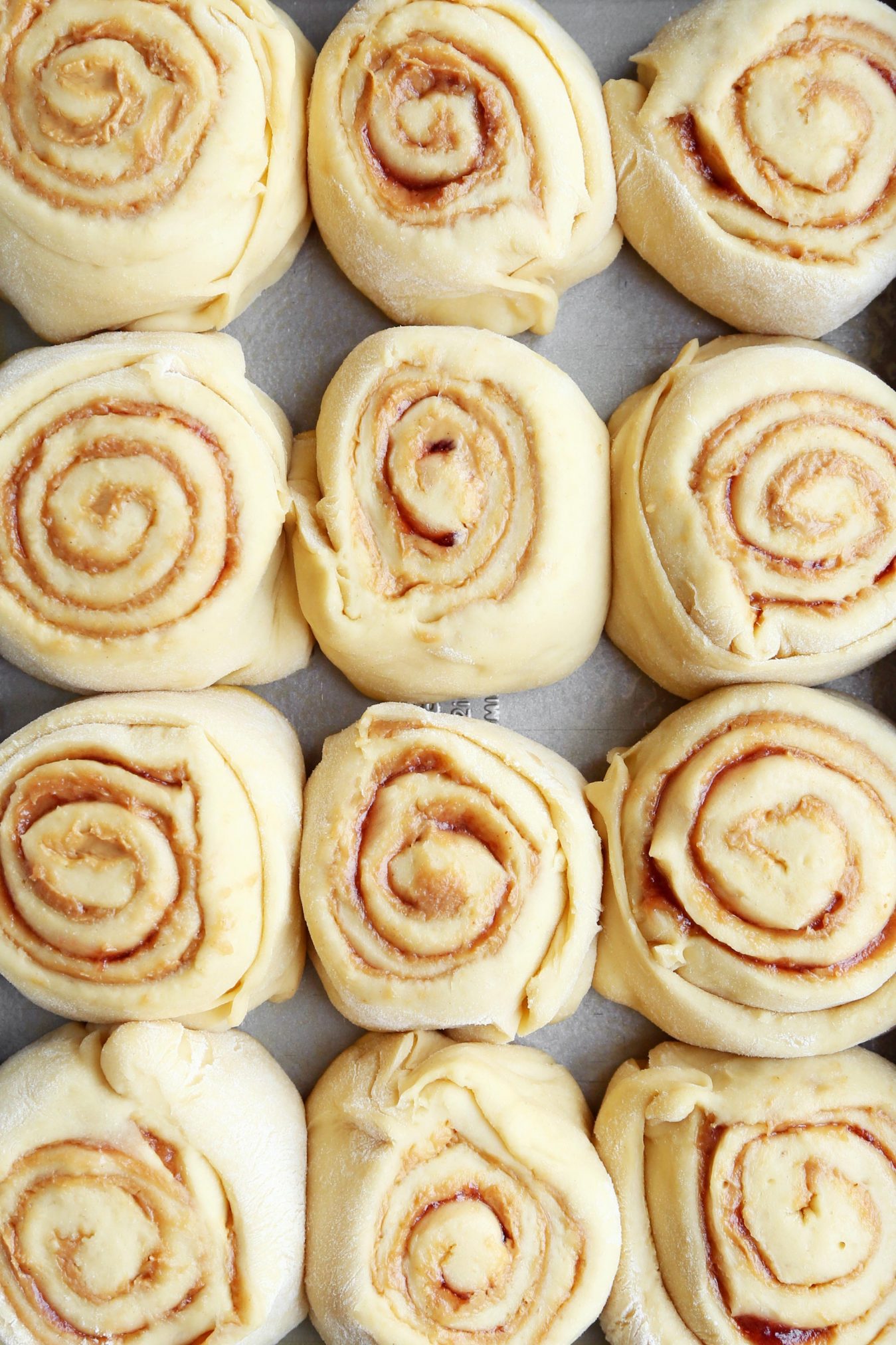 Bake the rolls in a preheated 375 degree F oven until they’re puffed up and golden brown, about 30 to 35 minutes. Remove from the oven and let cool about 5 minutes in the pan. Then invert onto a wire rack and let cool for another 10 to 15 minutes. 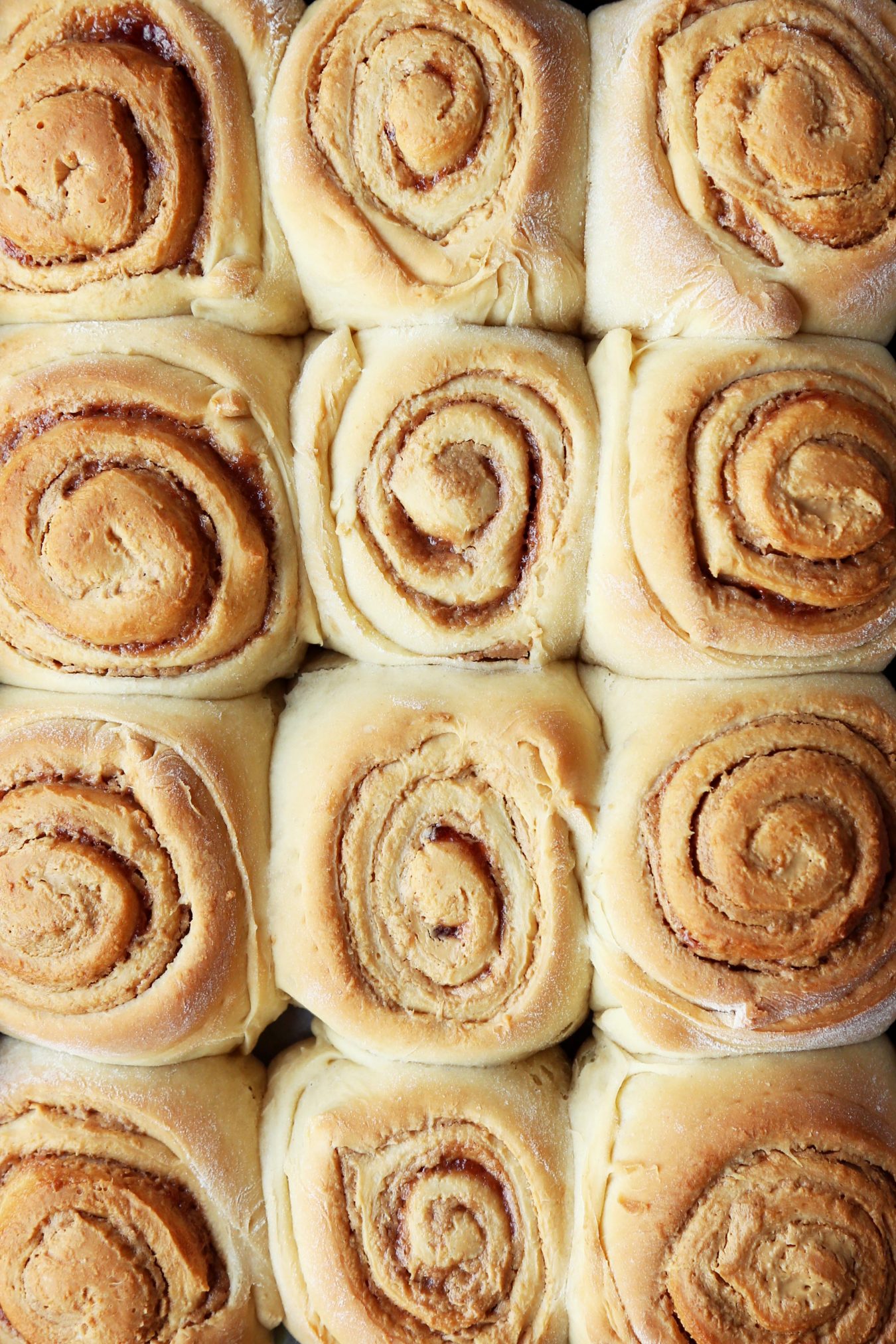 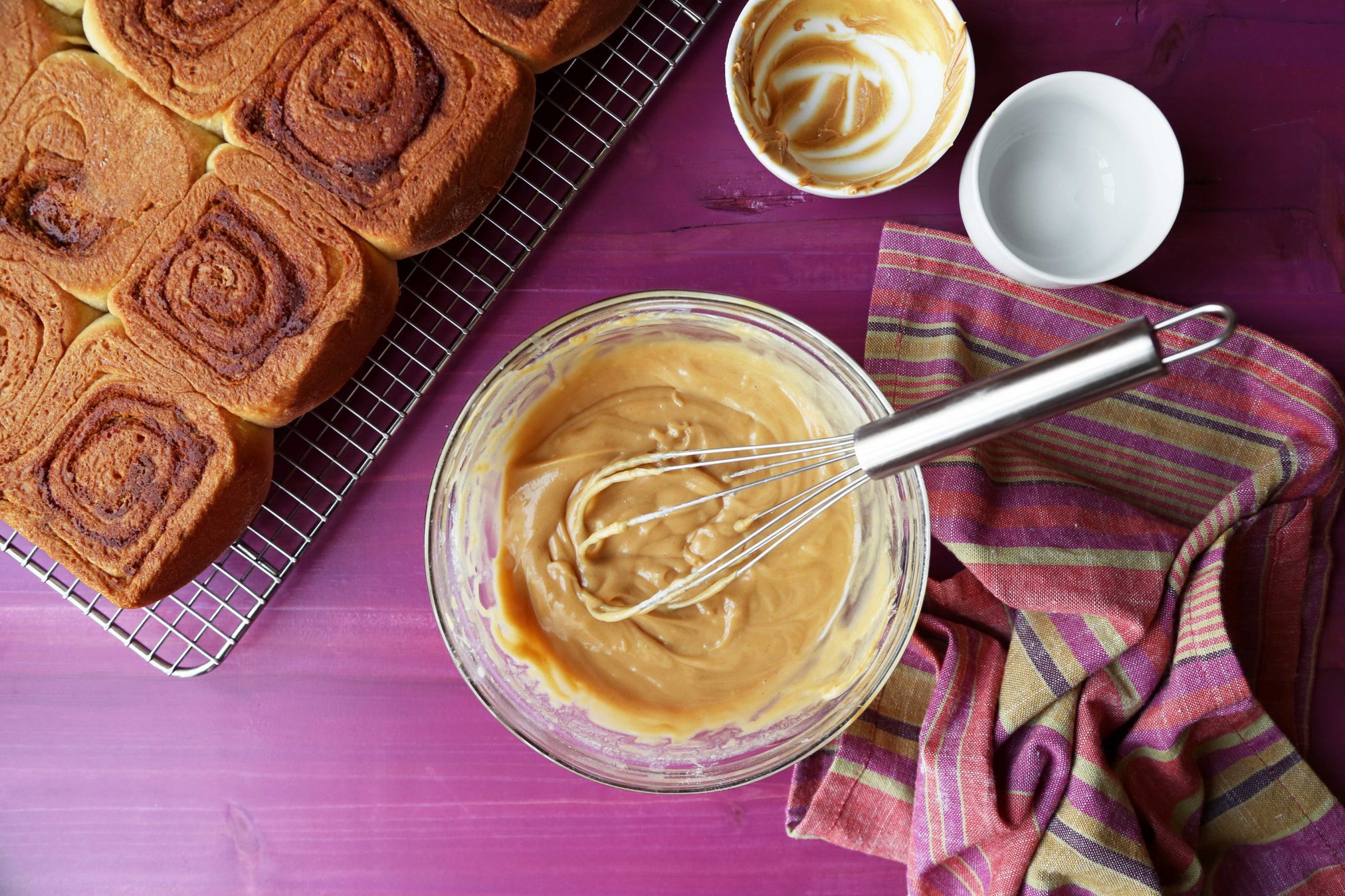 Once the rolls have cool, invert again onto a baking sheet, so that they’re right side up. Then spread each with the peanut butter icing and with a bit more melted jelly on top so you get both pb&j onto each.

**Note: When I say melted jelly, both for the filling and the topping, I just mean to warm up the jelly in the microwave (or in a saucepan over low heat) just until the jelly has loosened up a bit and is easily spreadable. Just make sure to cool it down a bit before using.** 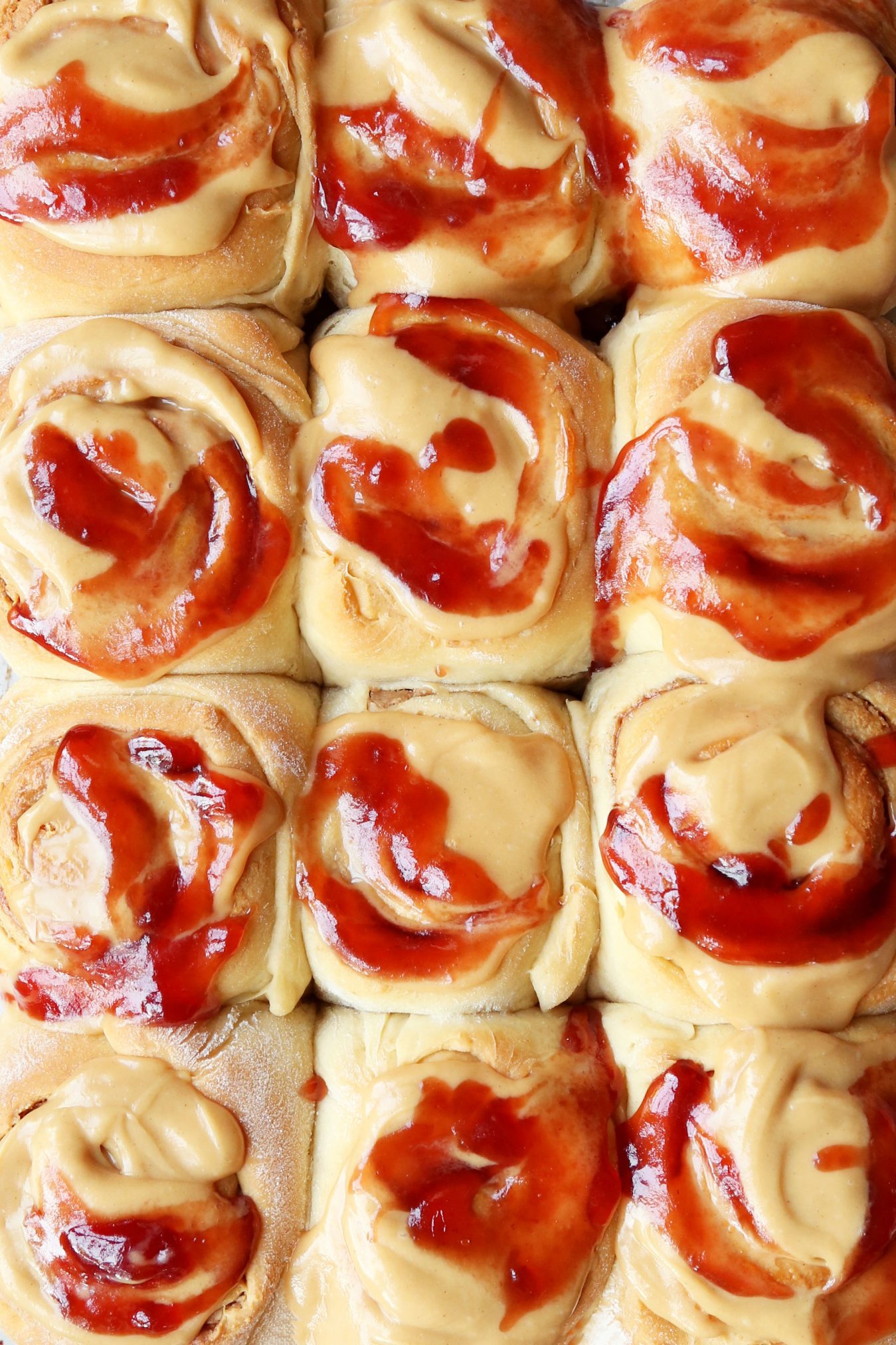 Serve the rolls and enjoy that nostalgic feeling you’ll get while you’re eating them, just as if you were having a PB&J as a kid. They’re best when eaten the day of because they’re just slightly warm and very soft, which is the best way to eat a cinnamon roll, in my opinion. 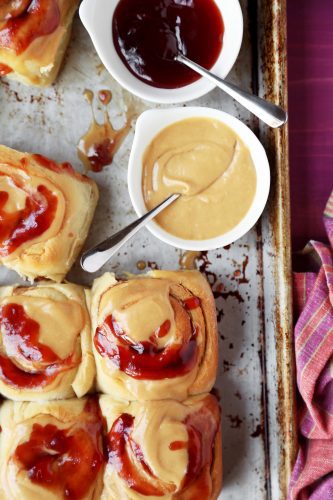 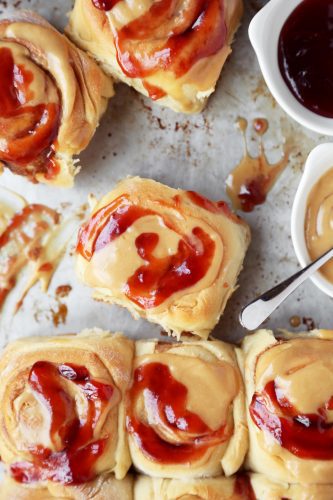 If you have any leftover, wrap well in plastic wrap and store in the fridge for up to 2 days. Just rewarm in the oven (wrapped in foil) for about 3 to 5 minutes or in the microwave (sans foil) for a few seconds. You can also freeze the baked rolls, without the topping, rewarm and then just spread the topping on right before serving. 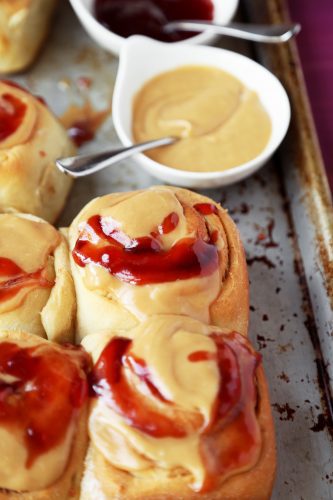 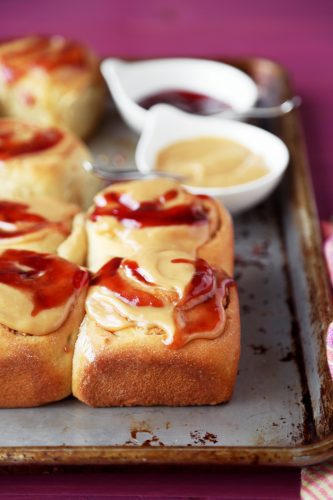 I hope you’ll give these pb&j rolls a try this weekend, because they’re amazing. They’d be great with almond butter as well, or you can swap out the strawberry jelly for your favorite flavor, which makes these cinnamon rolls pretty versatile. Give them a try soon! 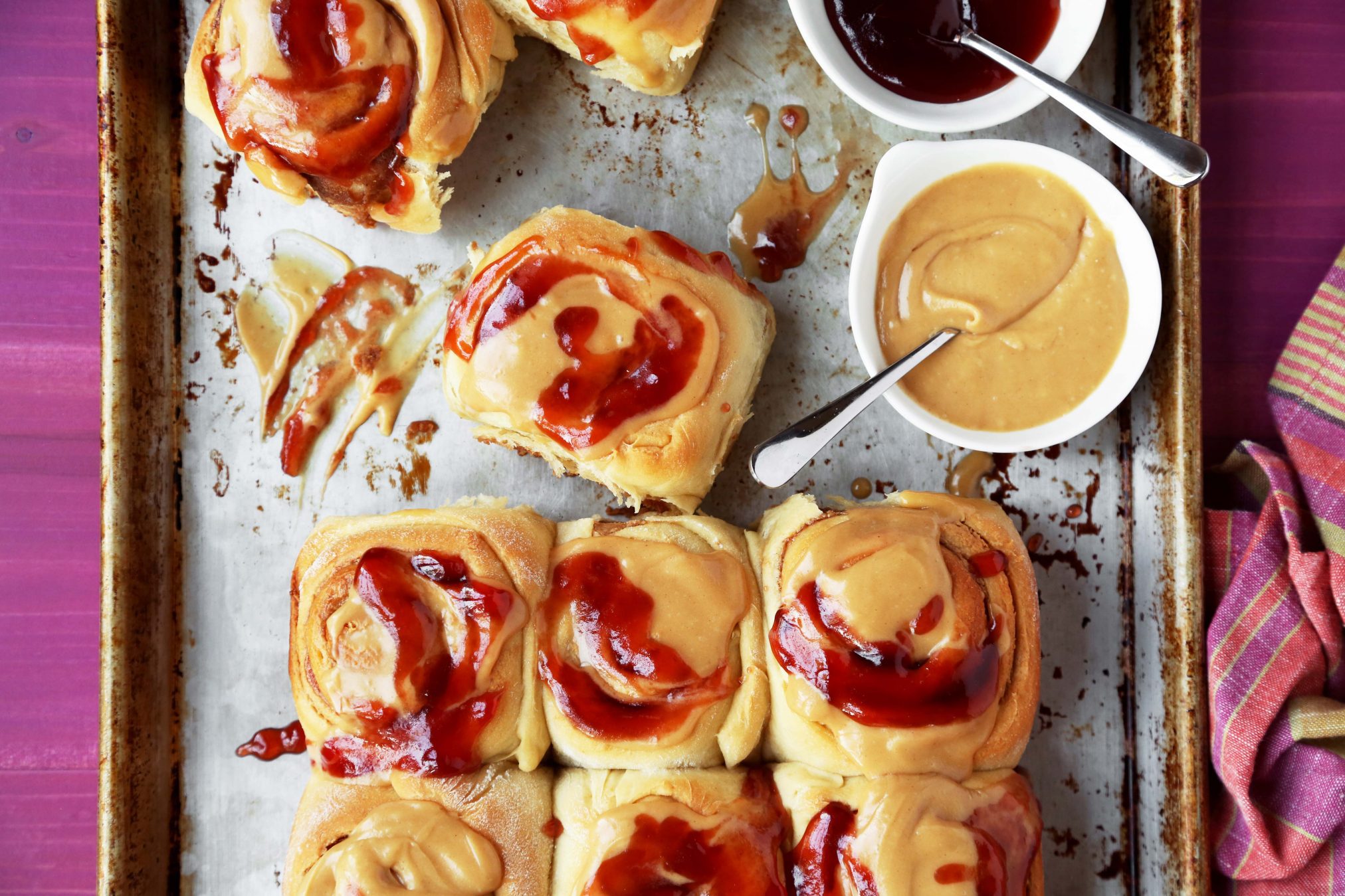 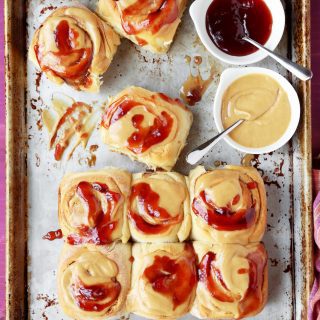