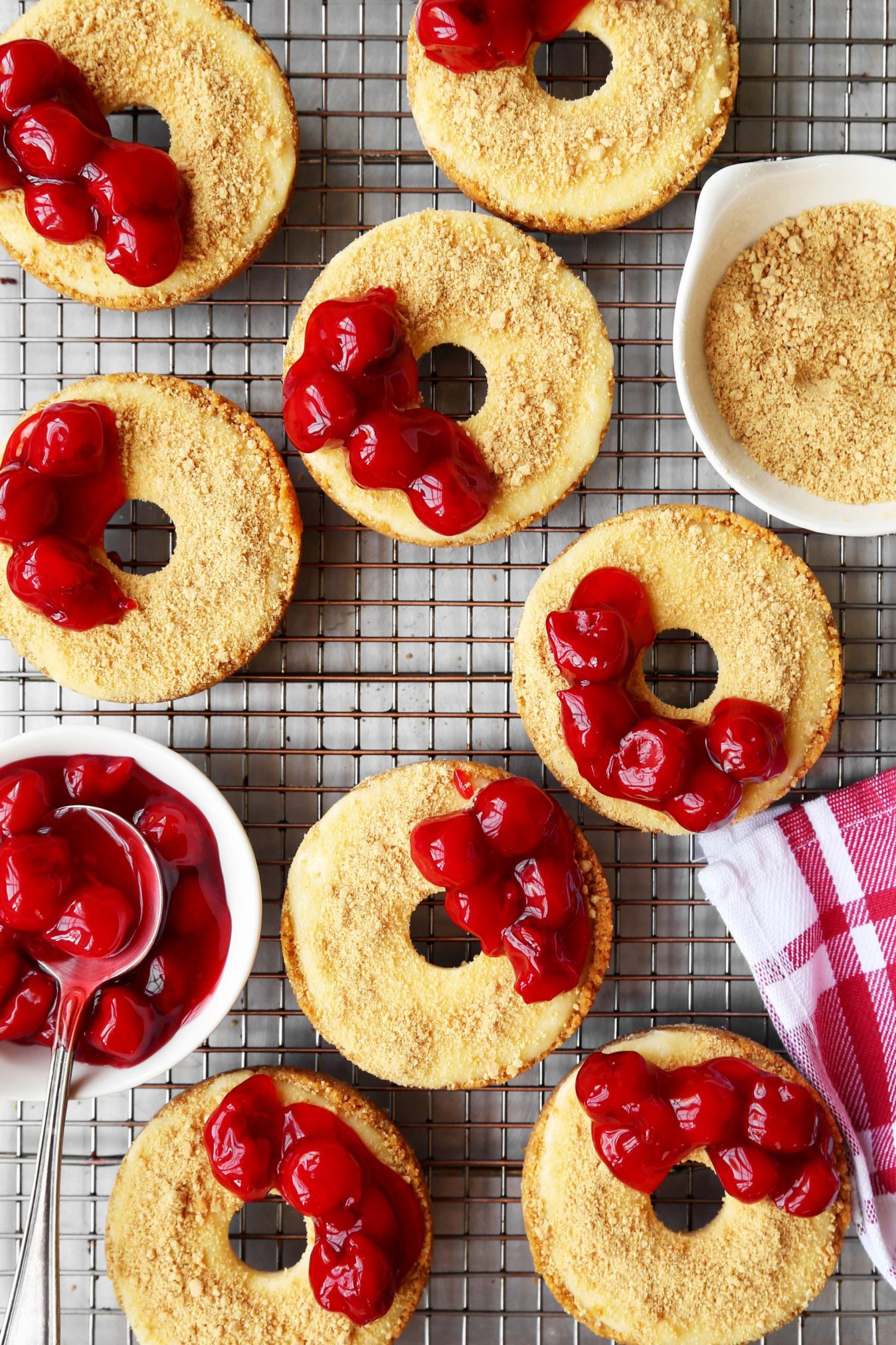 New York cheesecake meets doughnut and there’s honestly nothing better than this moment right here, right now, and us discussing this incredible creation. I have to admit that the idea came to me last week when I saw a photo on America’s Test Kitchen’s Instagram account. The photo in question was for their cherry cheesecake cookies and as soon as I saw them I thought to myself, these would make amazing doughnuts. How can I make this happen? After a few tweaks and a lot of thinking, these doughnuts were born and there’s no turning back now (not that we’d want to). The great thing about these cheesecake doughnuts though, is that they’re 100% easier to make, cook up a lot faster than traditional cheesecake, and are completely versatile. Transform all of your favorite cheesecake recipes into doughnuts, you’ll be so glad you did. It’s the recipe of the summer. All you need are a couple glasses of rosé and you’re ready to go. 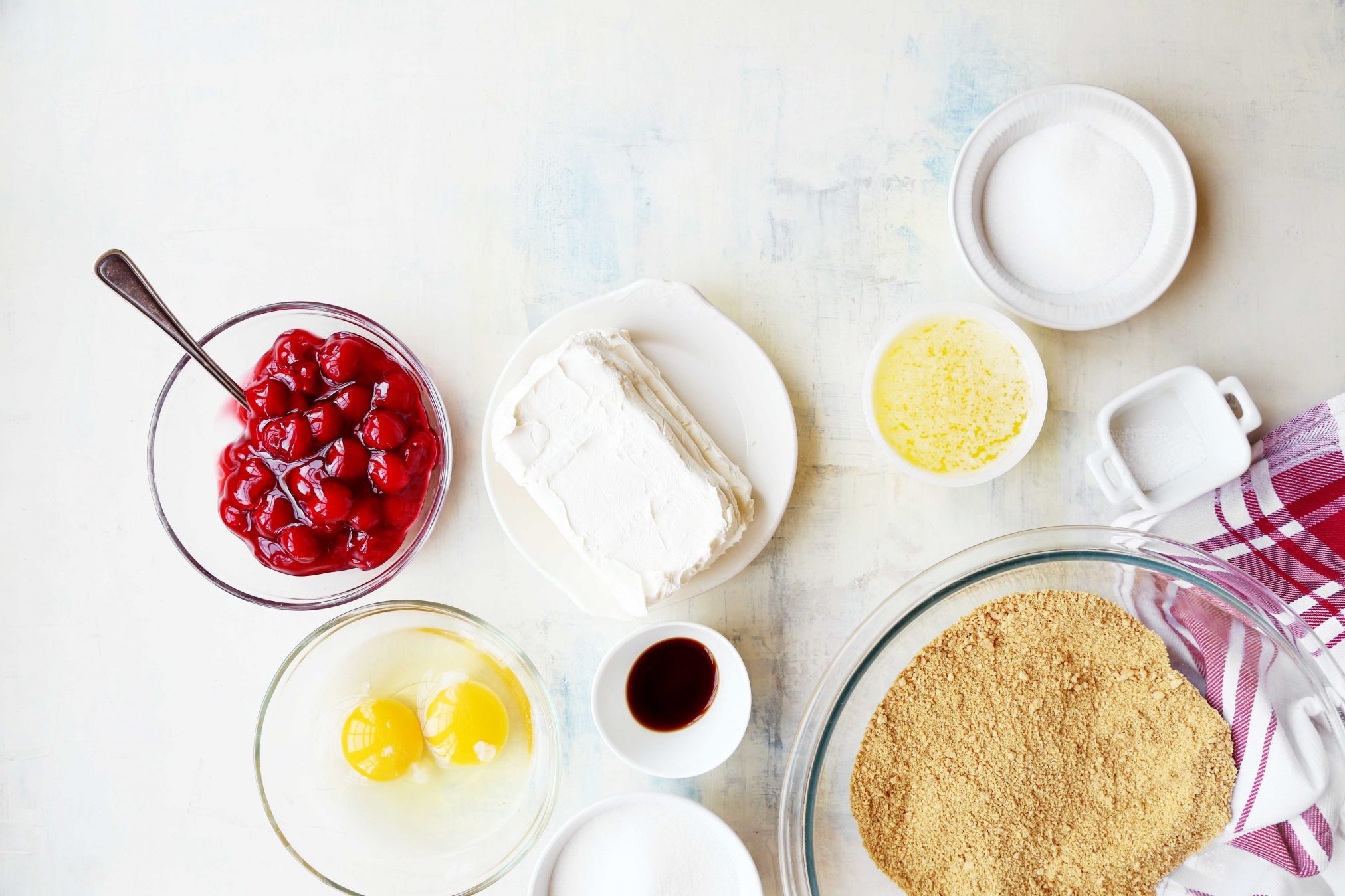 Everyone knows that the best part of any cheesecake is the crust. So it’s important that we start with that, although we really need to either way because we need it first, but that’s beside the point. In a medium bowl, stir together the graham cracker crumbs with sugar, salt and melted butter.

**Note: If you don’t want to keep these traditional, you can also make a chocolate crust by making it with chocolate cookie crumbs instead of graham crackers!!** 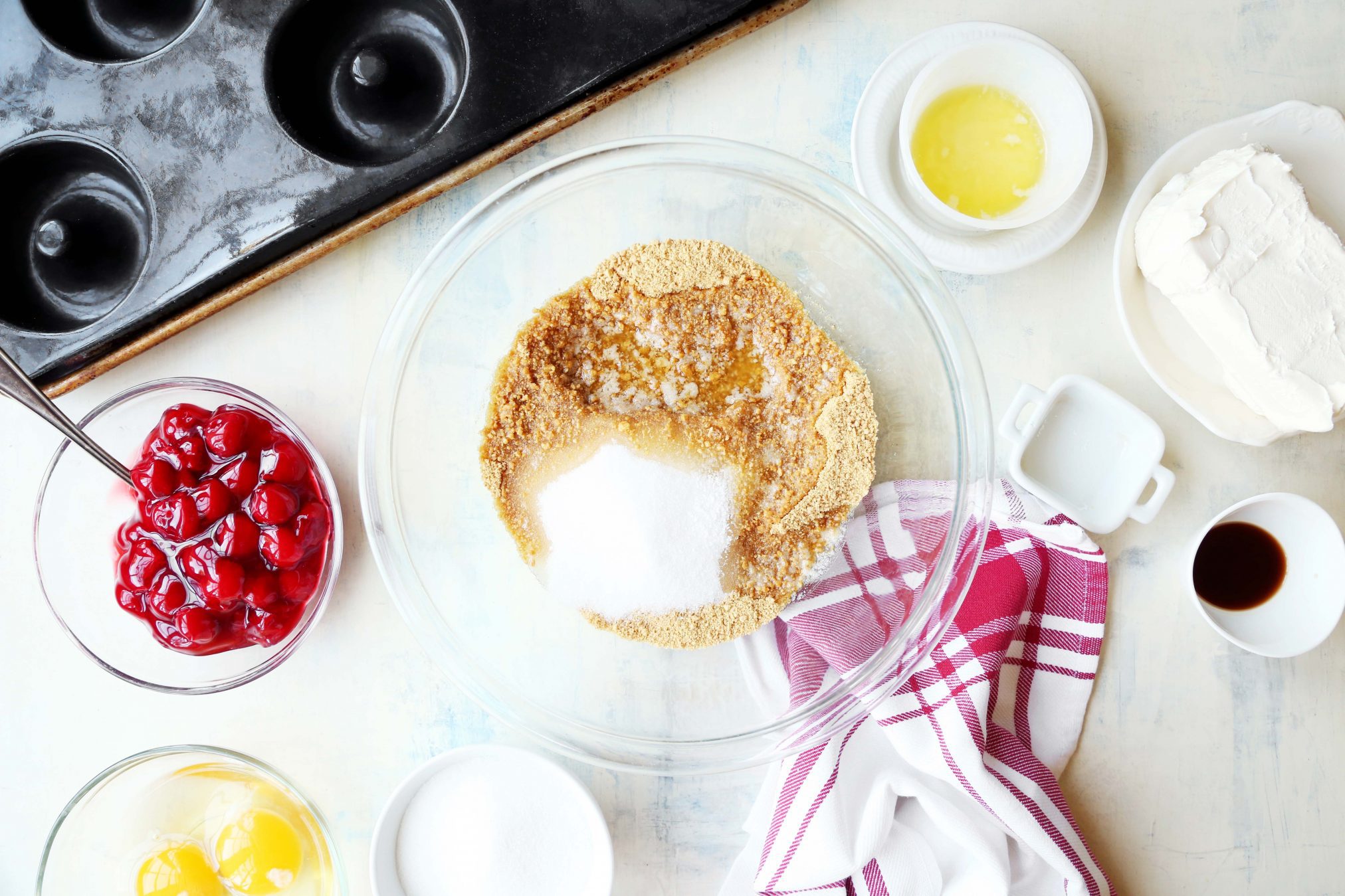 Divide the crumb mixture among the cavities of a doughnut pan. Then press down into a single layer and up the sides of the doughnuts. I’m using a silicone doughnut pan from the same creators of the silpat baking mat and honestly it’s the best doughnut pan to have. It’s flexible so taking the doughnuts out is a lot easier, and completely nonstick so you don’t have to grease it. Also, they doughnuts come out bigger, so it’s a win-win. I have this one, BUT this one is more economical and I’m sure would work just fine.

**Note: If you’re using your standard metal doughnut pan, you’ll want to grease it with cooking spray and also know that they don’t hold as much. You’ll probably have to bake them in batches unless you have two pans.** 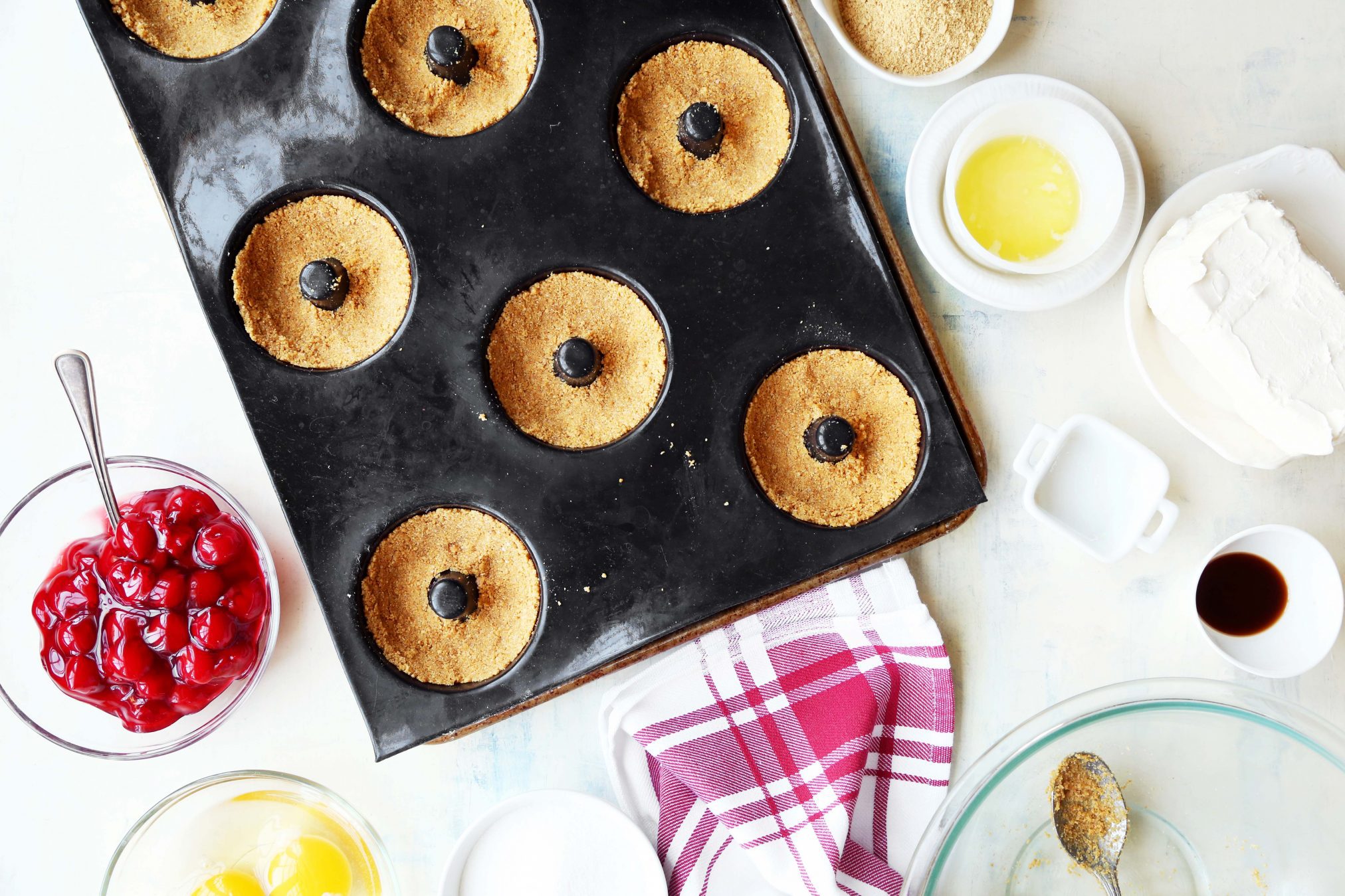 To make the filling, beat together the cream cheese and sugar on low until smooth and creamy. Then mix in the eggs, adding one at a time, mixing well after each addition. Stir in the vanilla until well combined.

**Tip: To ensure a smooth filling without any cream cheese lumps, you’ll want to beat the mixture on low and also make sure that the cream cheese and eggs are at room temperature.** 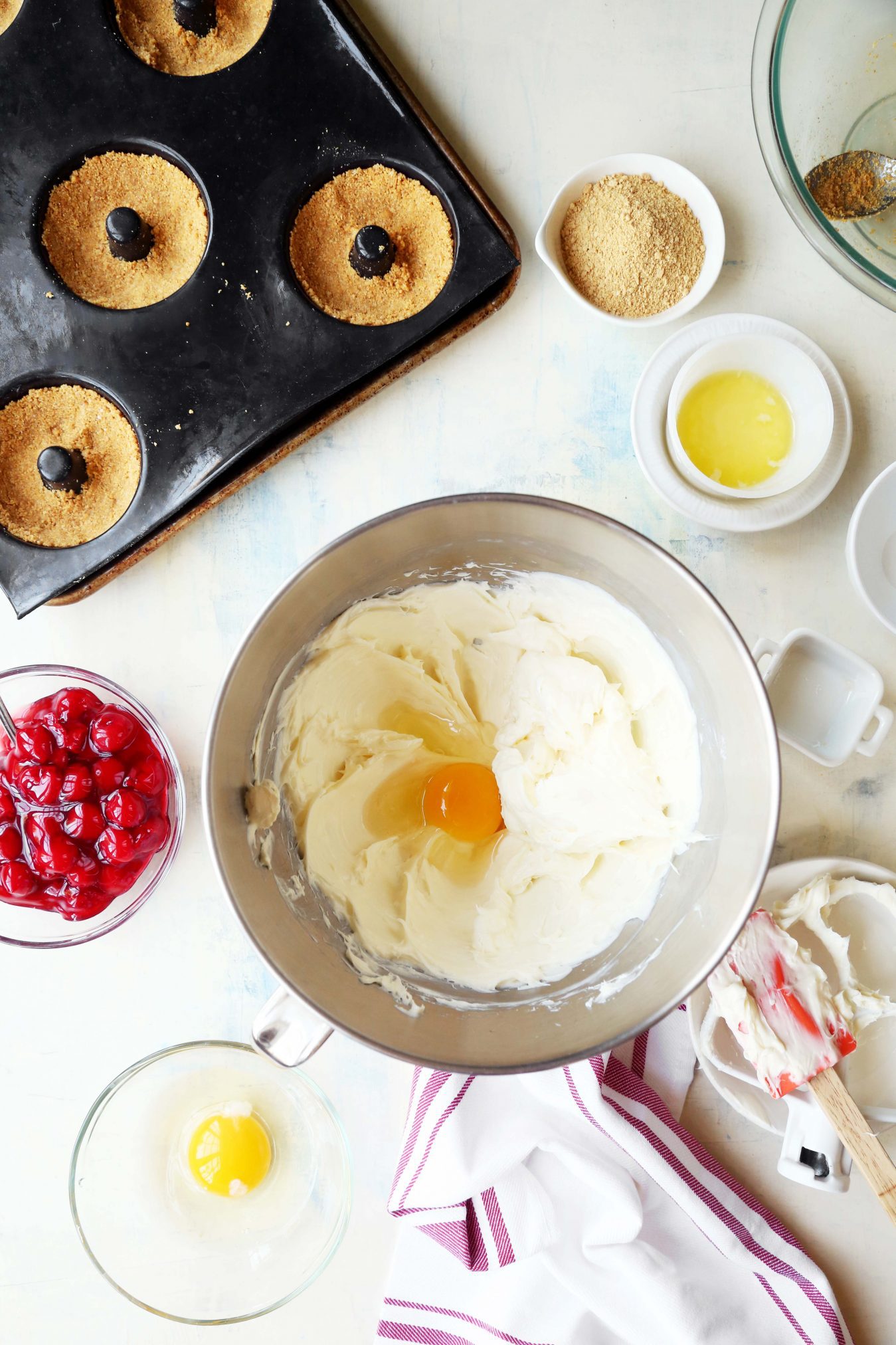 Transfer the filling into a disposable pastry bag, fitted with a plain circle tip, and then pipe out into the doughnut mold over the crust. Give the pan a few gentle taps on the counter to ensure there are no air bubbles lodged in.

**Tip: If using a silicone doughnut mold, you’ll want to make sure to place the mold on top of a baking sheet so that it’s sturdy and easier to transport in and out of the oven.** 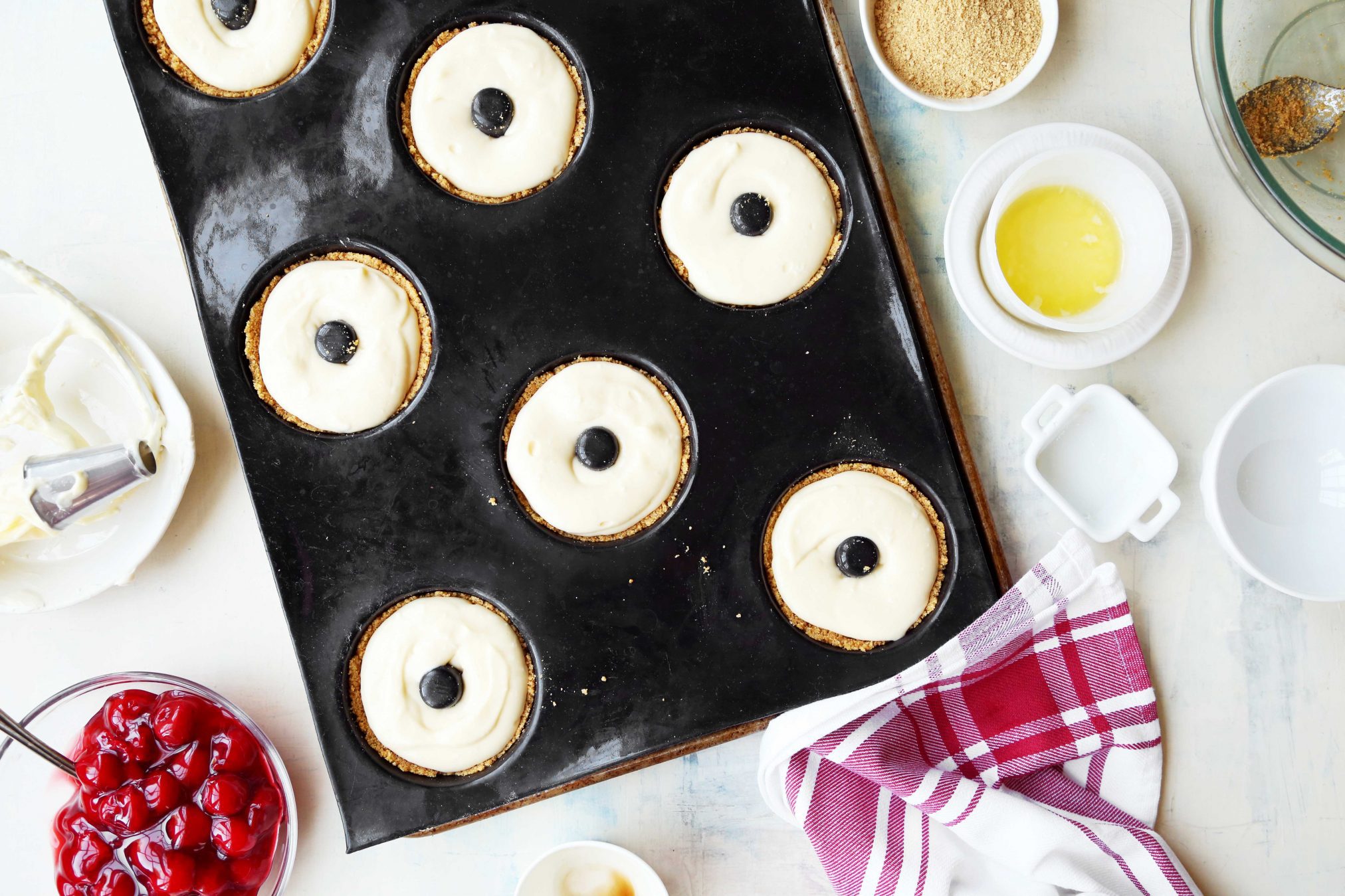 Bake until the filling has puffed, set and just barely started to brown around the edges, about 30 minutes. Remove from the oven and let cool to room temperature. Then chill in the fridge for at least 30 minutes. This will make it easier to remove the doughnuts from the mold. Sprinkle the tops with graham cracker crumbs. 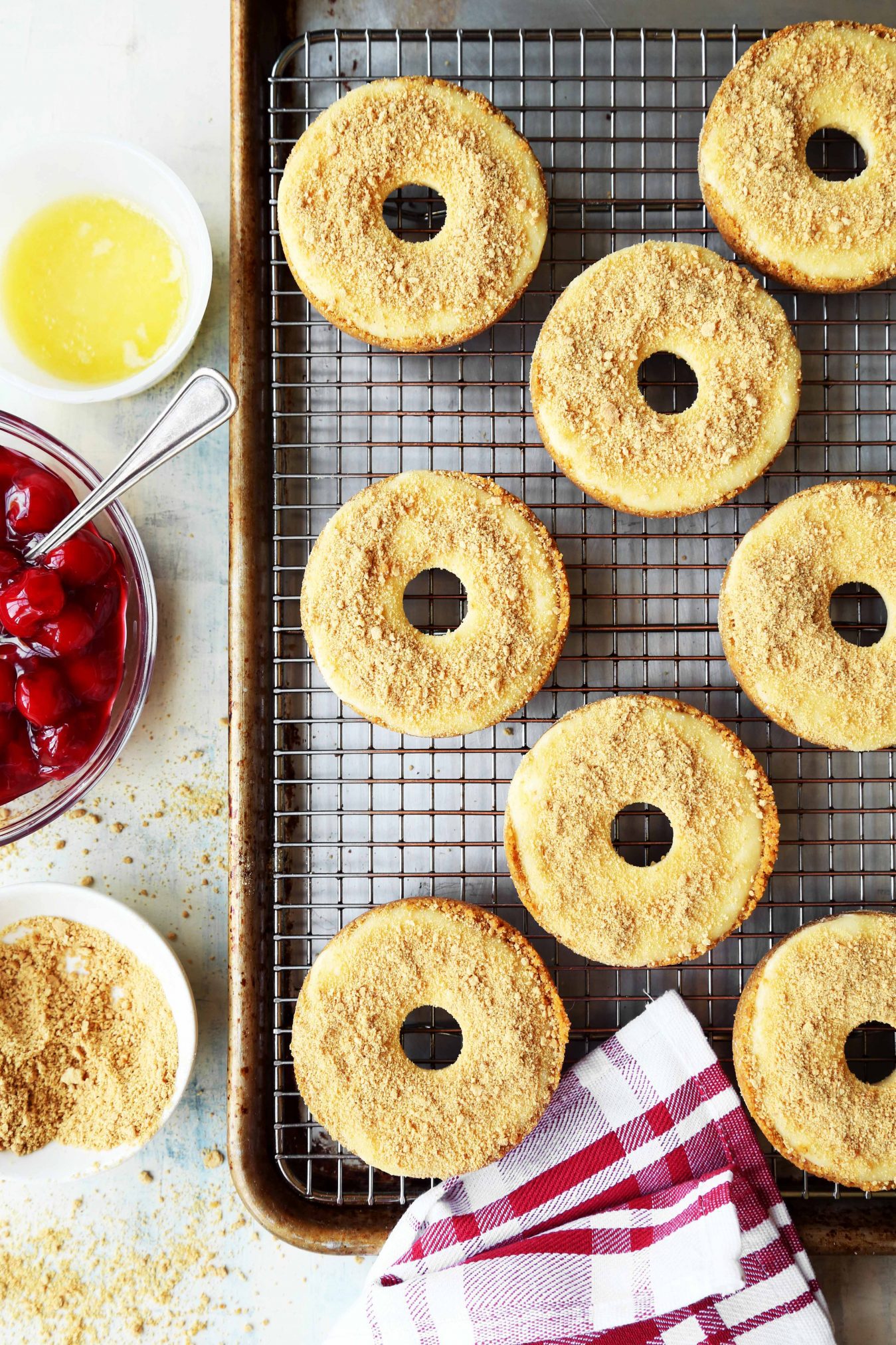 Then top each doughnut with as much or as little of the prepared cherry pie filling as you’d like. You don’t have to cover each doughnut completely, but if you want to, why not?

**Tip: You can make your own cherry topping, but I feel like this canned stuff is really traditional and you can’t recreate it. There’s just something so nostalgic about the pie filling.** 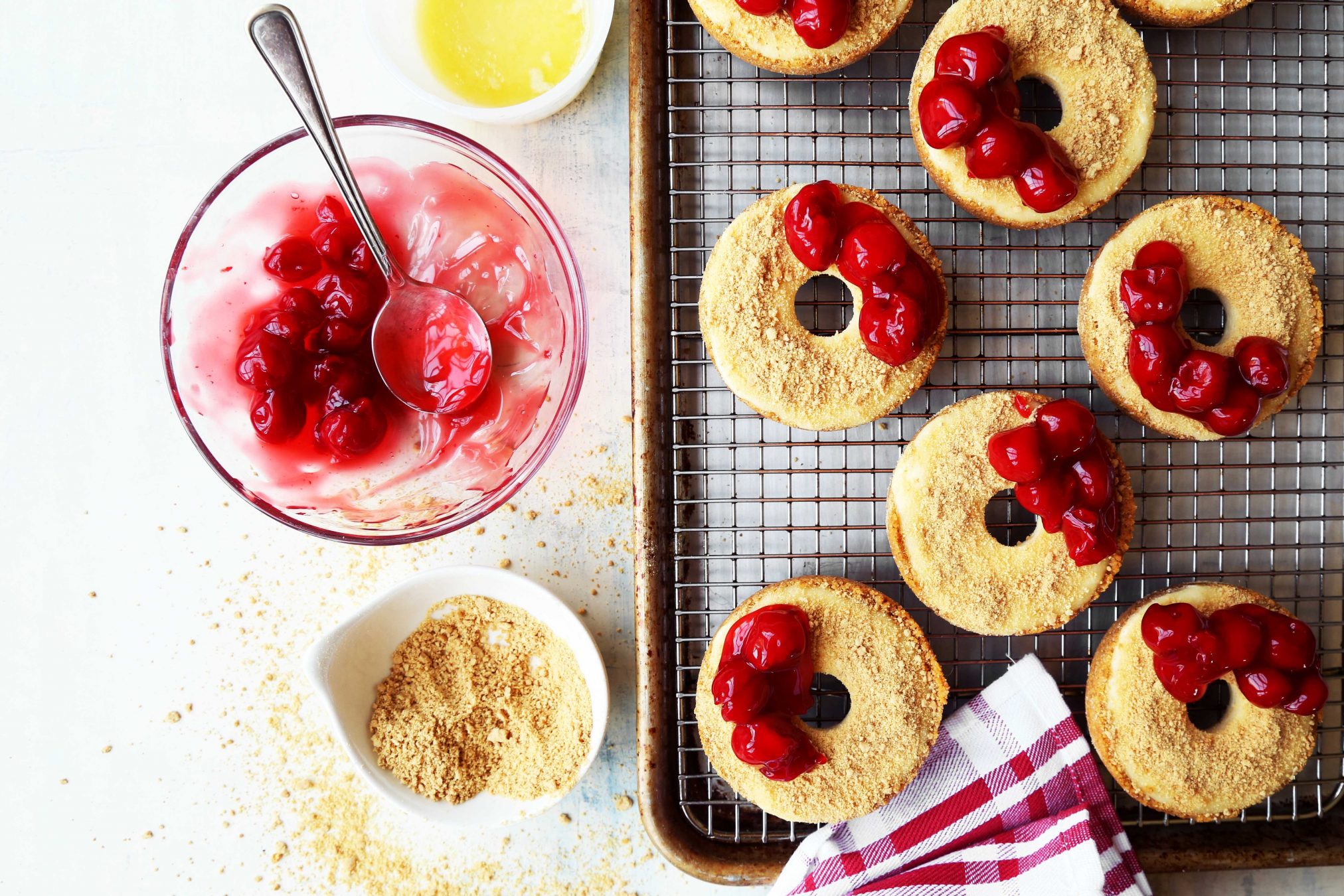 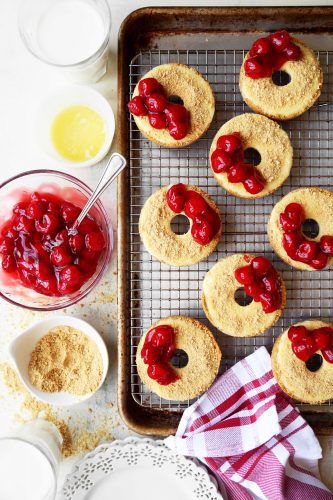 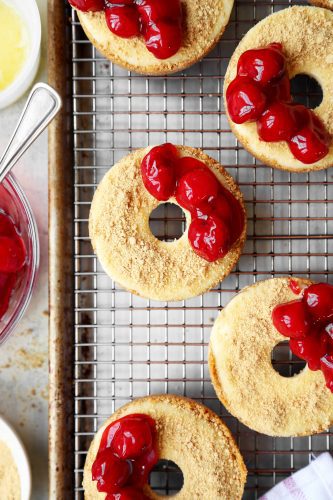 You can flavor the top of the cheesecake with any prepared pie filling you’d like. Blueberry, raspberry, or strawberry would all be great. When it comes to cheesecake, you can’t really go wrong. 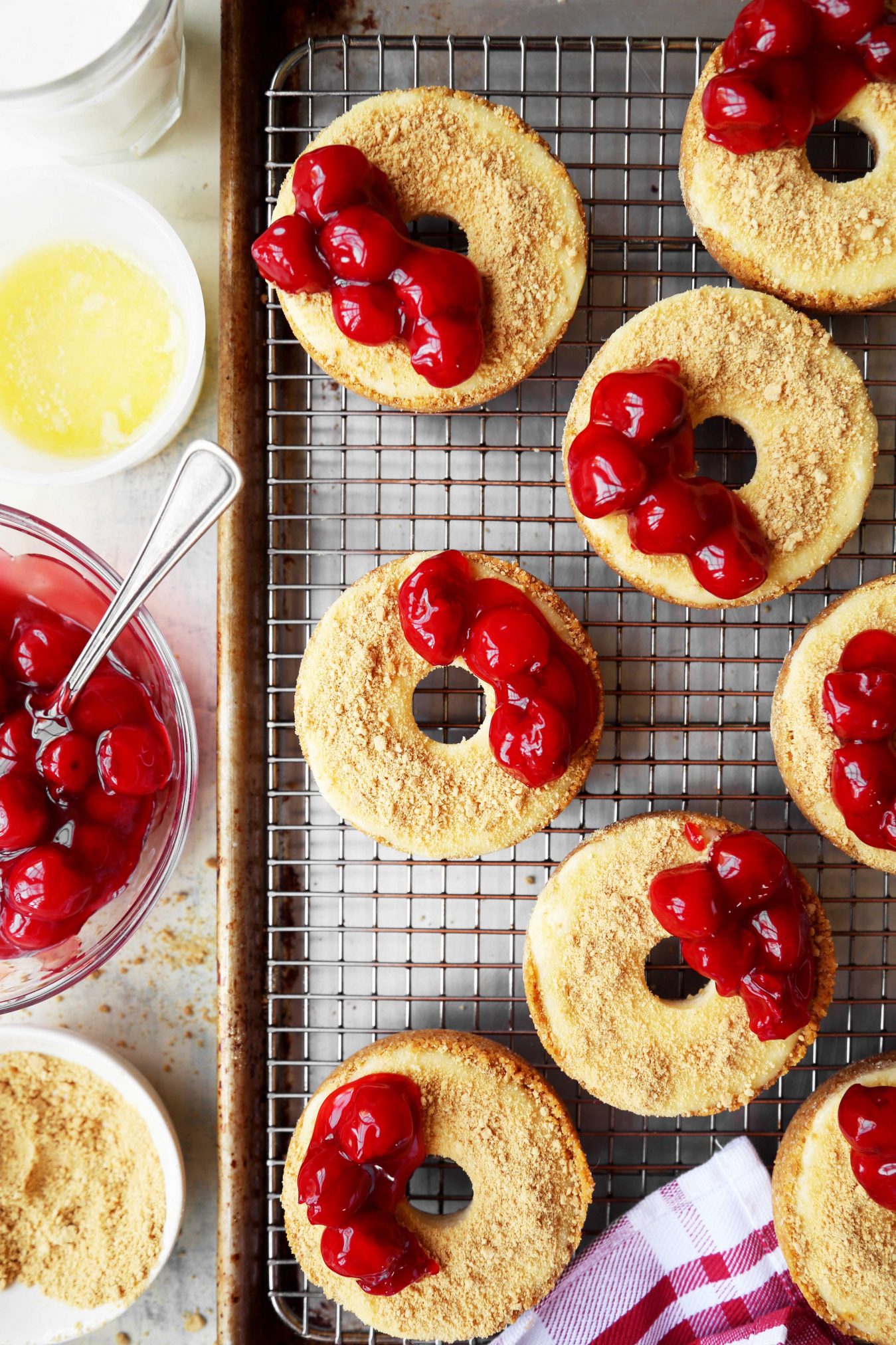 If you don’t have a doughnut pan and are in dire need of making these right away, you can always just make them in a cupcake pan and you’ll have mini cheesecakes instead. 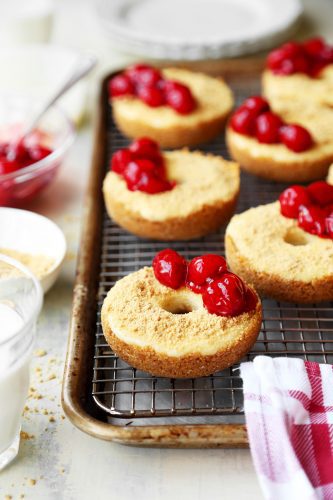 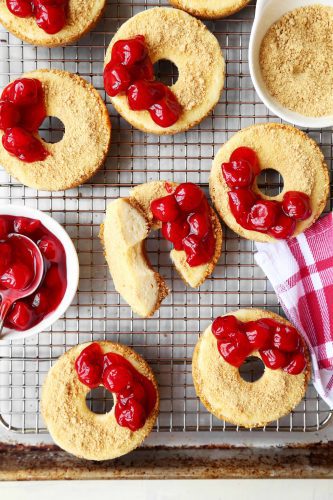 New York Cheesecake Doughnuts are going to be your dessert of the summer, I can already feel it. It’s a great way to put a smile on your friends and family’s faces because they’re adorable and a little dangerous because you’ll just eat them all, one right after the other. If you make them, be sure to share a photo on IG and tag me in it (@jonjon33 #thecandidappetite)! 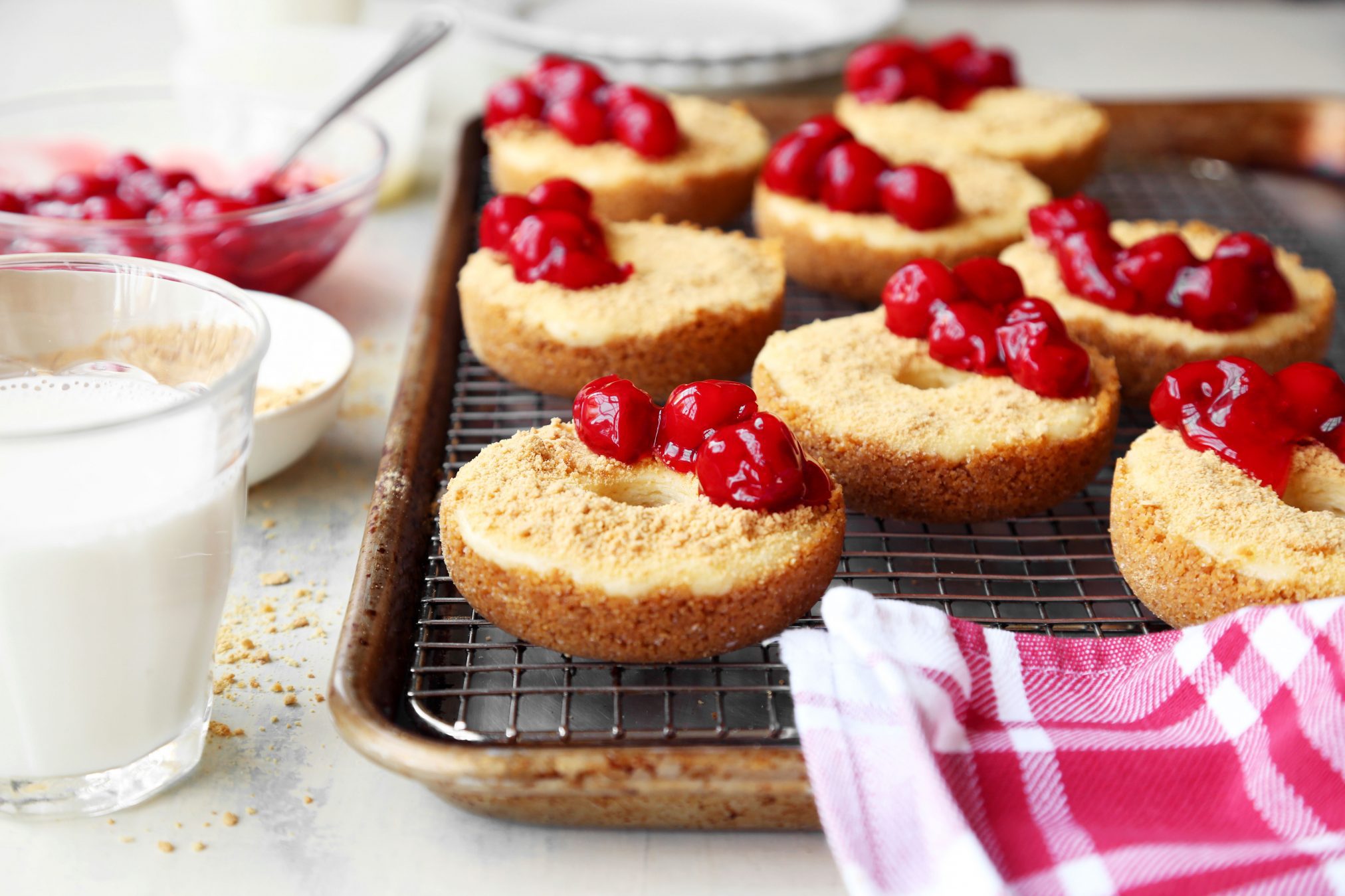 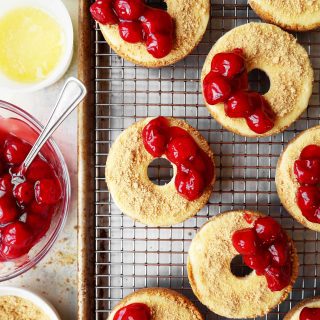