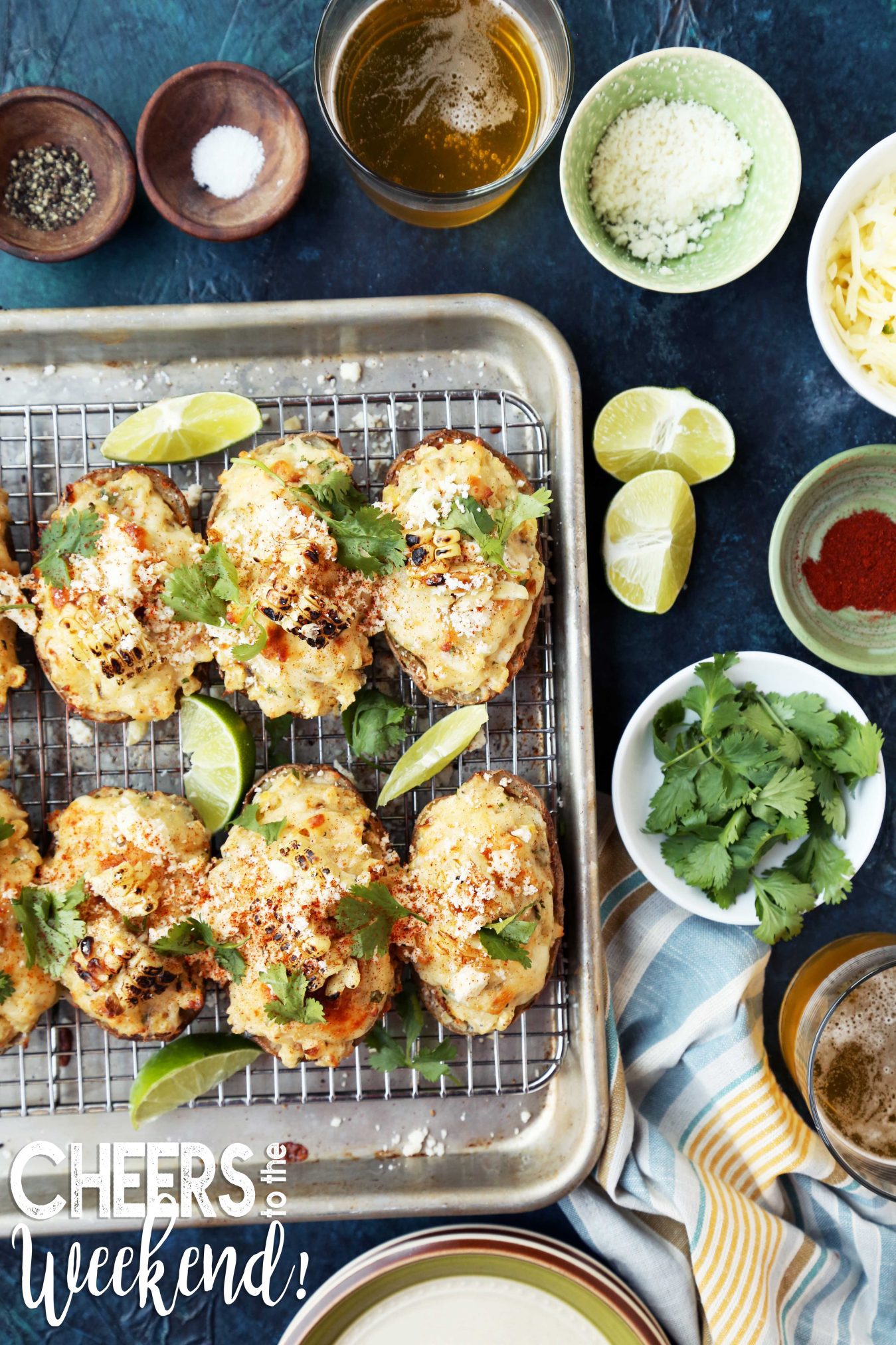 So I don’t know if this is weird or gross or if I’m the only one who did this/does this, but when I was a kid, my mom would get us TV dinners (because they were inexpensive and kids love them). I used to get the salisbury steak one with mashed potatoes and corn, but that’s besides the point. Anyhow, what I’m trying to get at is that I would always mix the corn with the mashed potatoes. Always. I still do the same thing whenever I make mashed potatoes and corn and I kid you not, it is one of the best food combinations out there. Like peanut butter and jelly or eggs and bacon or cookies and milk or cake and ice cream, you get the point. Mashed potatoes mixed with corn is where it’s at. If you know exactly what I’m talking about, because you yourself are a closet mashed potato and corn lover, then step right up because we’re now best friends. You might as well get used to it. If you’ve never tried it before and think I’m about the craziest person out there, well you don’t know what you’re missing, and I as your friend cannot let you continue on this path. It’s a good thing I’m here because I’m about to change your life. 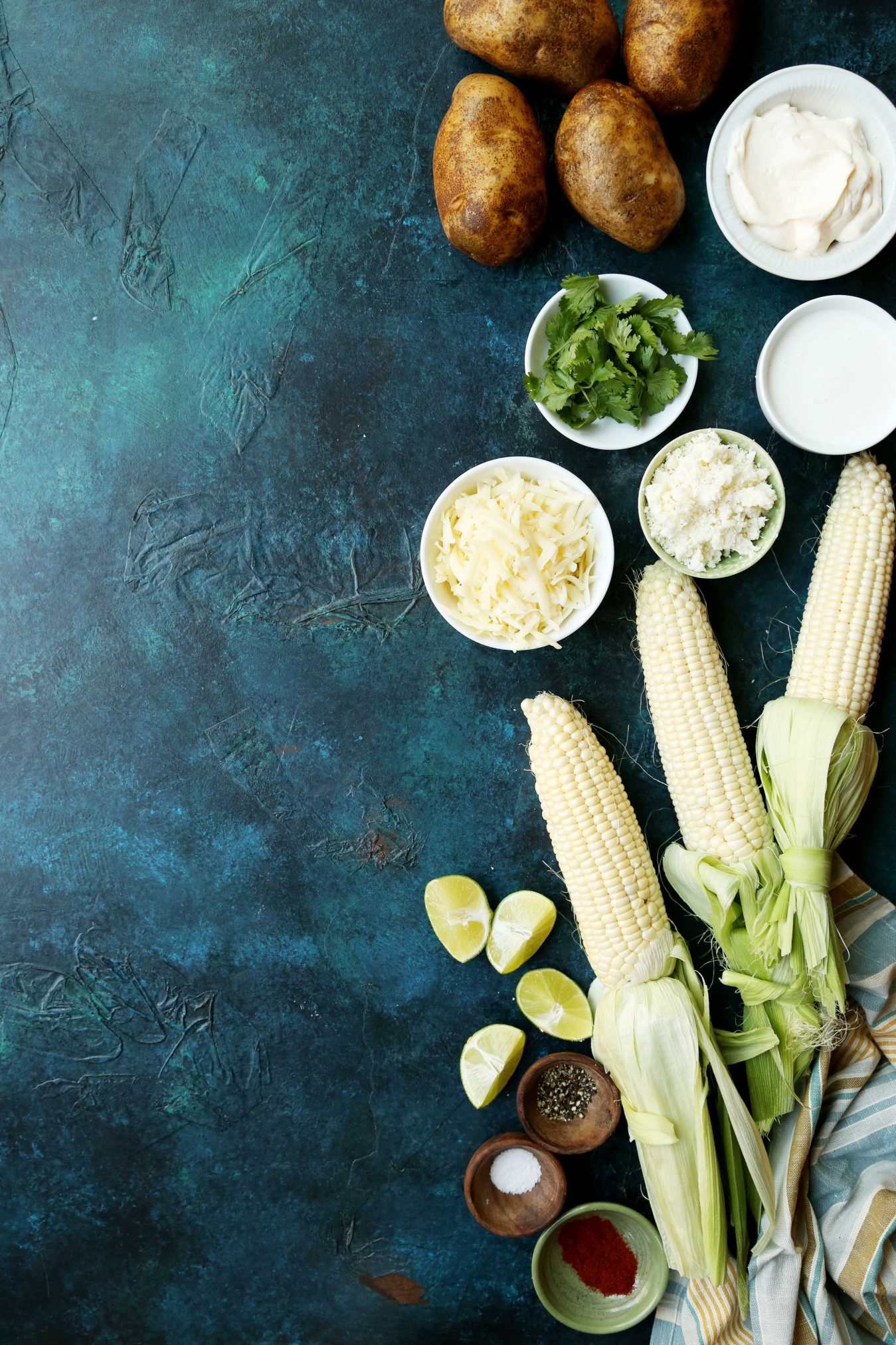 So before we get to the twice baked part of this recipe, we have to do a first bake. Scrub the potatoes clean, poke some holes all around with a fork and place on a wire rack set over a baking sheet. Bake in a preheated 425 degree F oven until fork tender about, 45 mins to an hour, depending on how big your potatoes are. Medium-ish is a good size for these.

**Tip: You can also cook these in the microwave! Place the potatoes in a microwave safe dish and nuke on high for 5 minutes. Then turn over and cook for another 3 to 5 minutes until soft through the center. If the potatoes are still firm, cook in 1 minute bursts until down.** 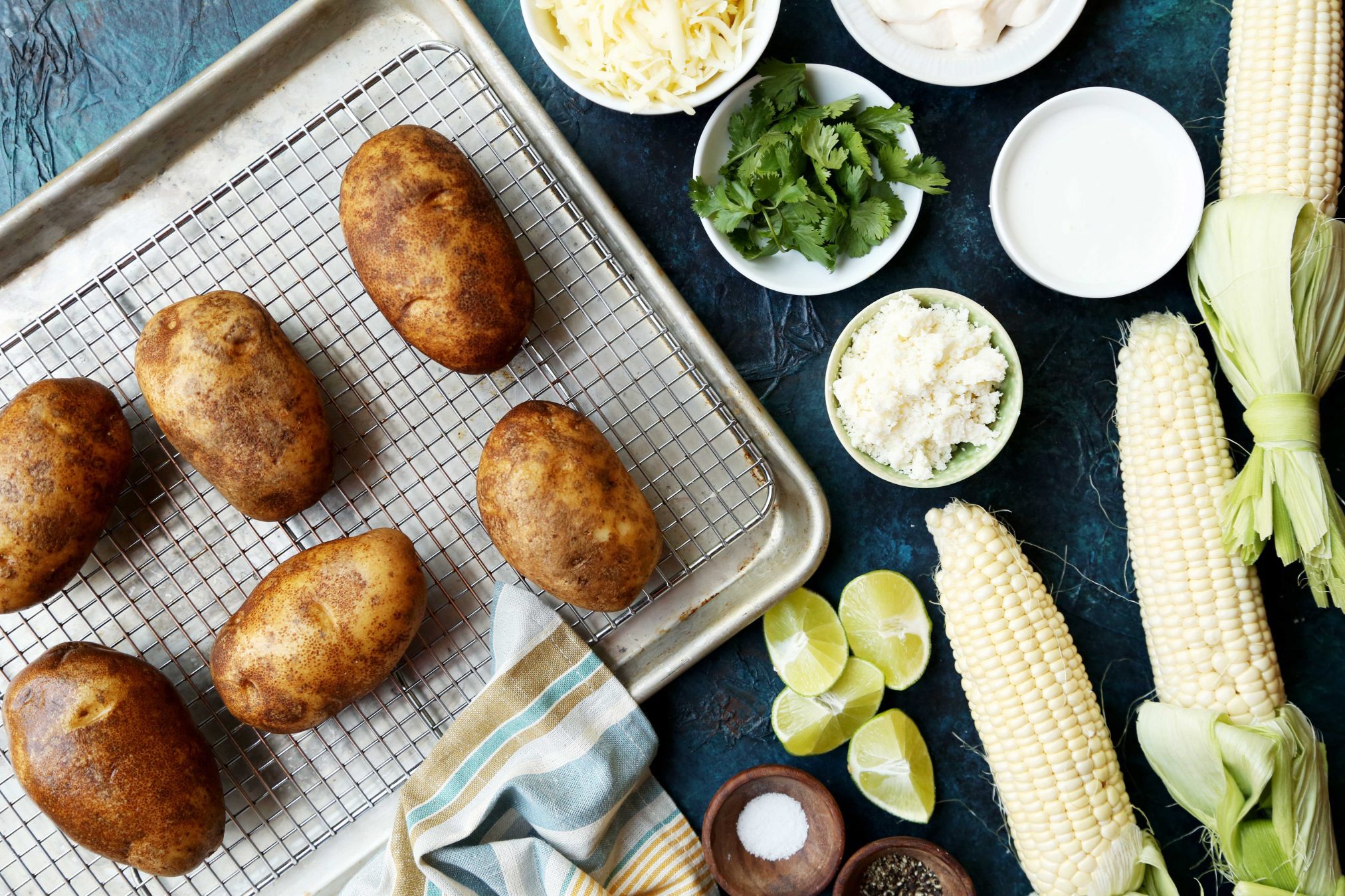 Once the potatoes have cooked, remove from the oven and let sit until cool enough to handle. The potatoes will be easier to scoop out when no longer hot.

**Tip: If you want to speed things up a bit, you can carefully (like holding an oven mitt or something) cut the potatoes, lengthwise, in half and return to the baking sheet. This will allow air to circulate and cool the potatoes faster.** 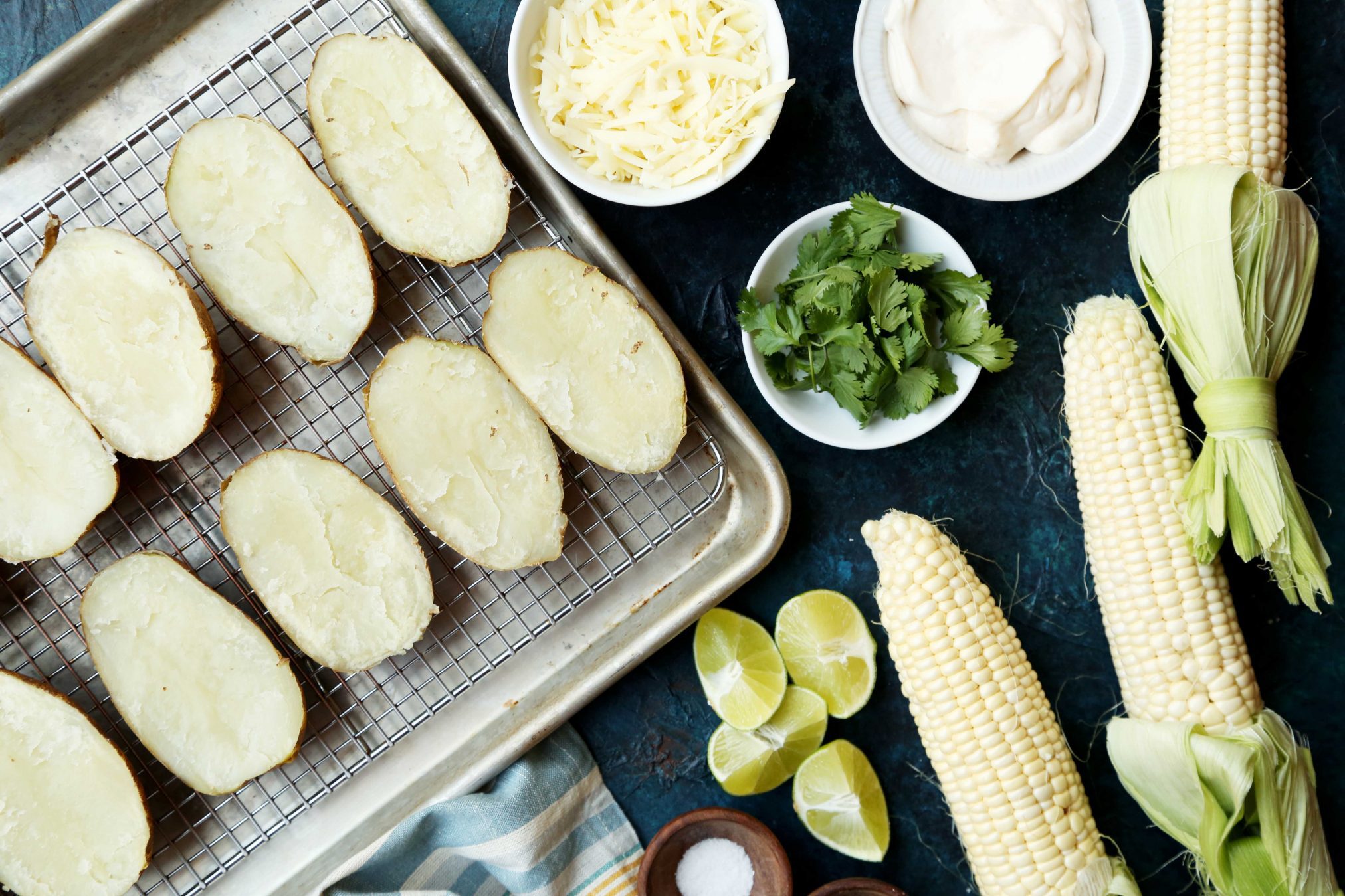 While the potatoes cool, let’s turn our attention to that corn. Shuck the corn, removing all of it’s corn hair and place on a baking sheet. Drizzle liberally with olive oil and season with salt and black pepper. Place under the broiler until charred and crispy all around.

**Tip: Keep a close watch on it so that it doesn’t burn, and be sure to turn it every so often to ensure even browning. If you have a gas range, you can also cook the corn over the flame but it’ll take longer.** 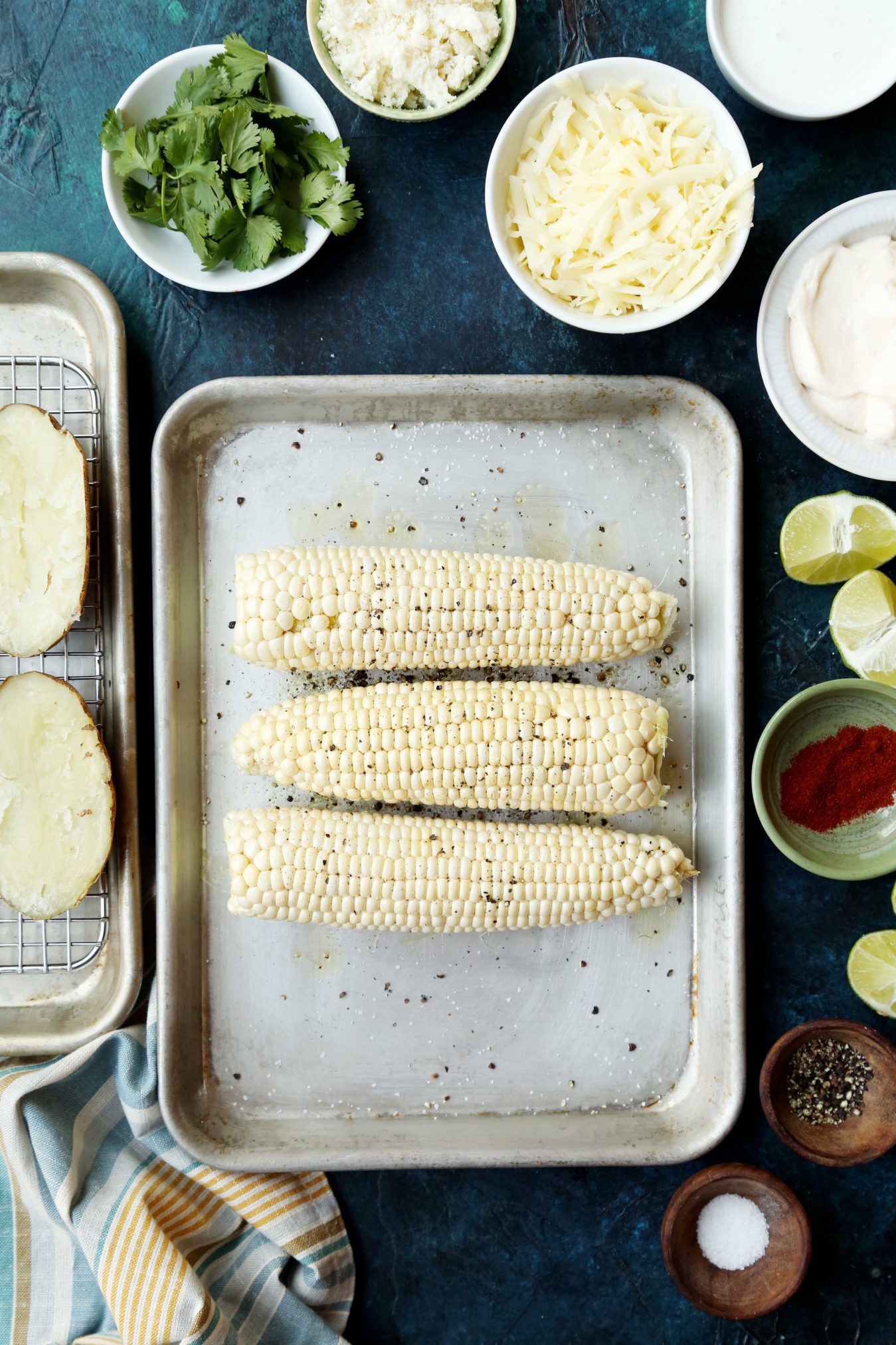 Once the potatoes are cool enough to handle, scoop out most of the insides out of each half. You want to make sure to leave some potato in the skin because if not, your shells will be too flimsy and fall apart.

**Tip: So one of the biggest tips I’ll give you is great for any and all twice baked potato recipes. I like to drizzle the scooped potato shells with olive oil and season with salt and pepper and bake until crispy and lightly golden brown. This makes a world of difference, trust me. If you were to just scoop the potatoes bake in, and baked it, you would have okay potatoes with a soft shell. But baking the shells until crispy give them a great texture!** 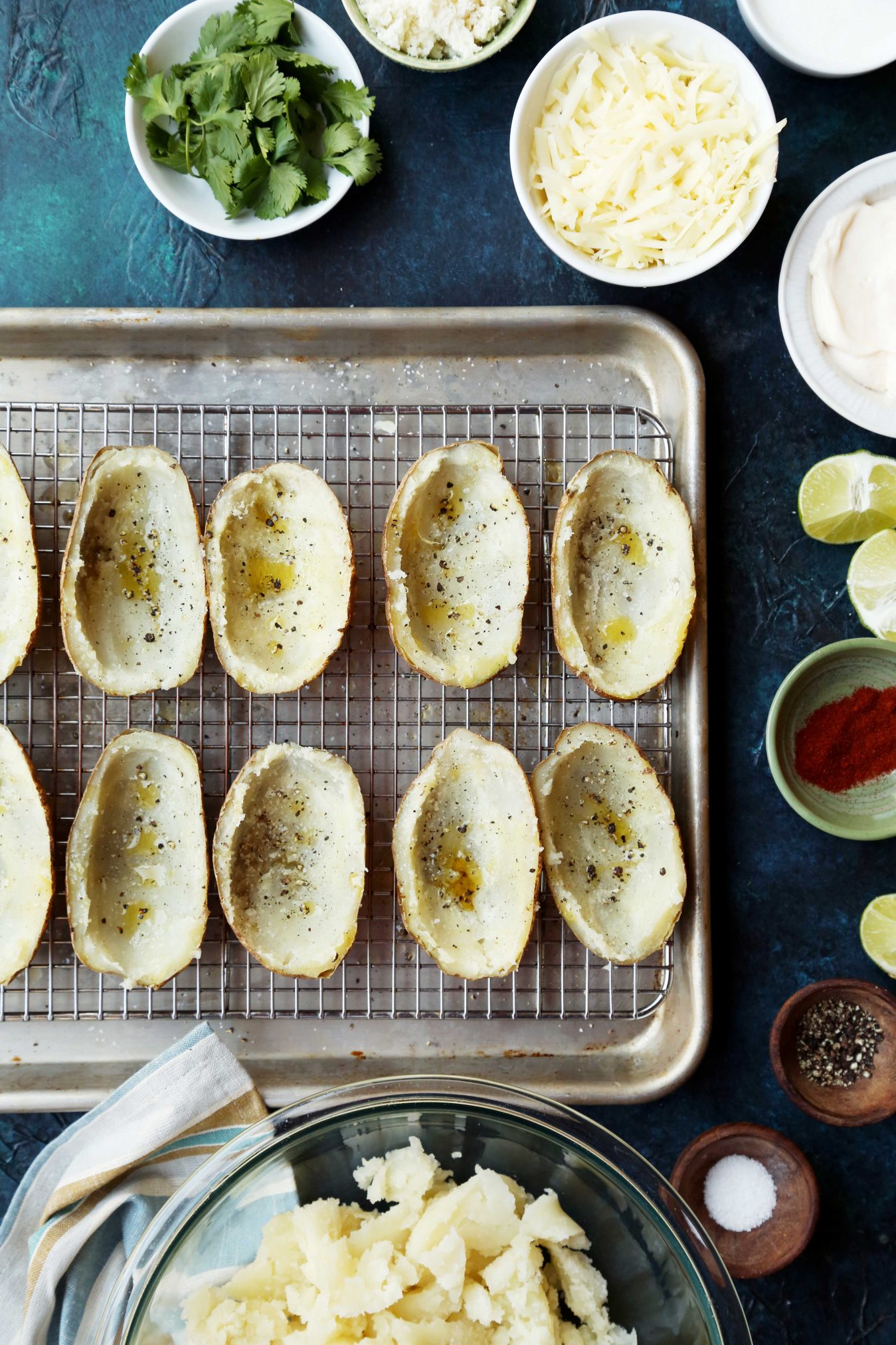 Once the corn has charred and cooled, carefully cut the kernels off the cob and set off to the side until we’re ready to stir them into the potatoes. 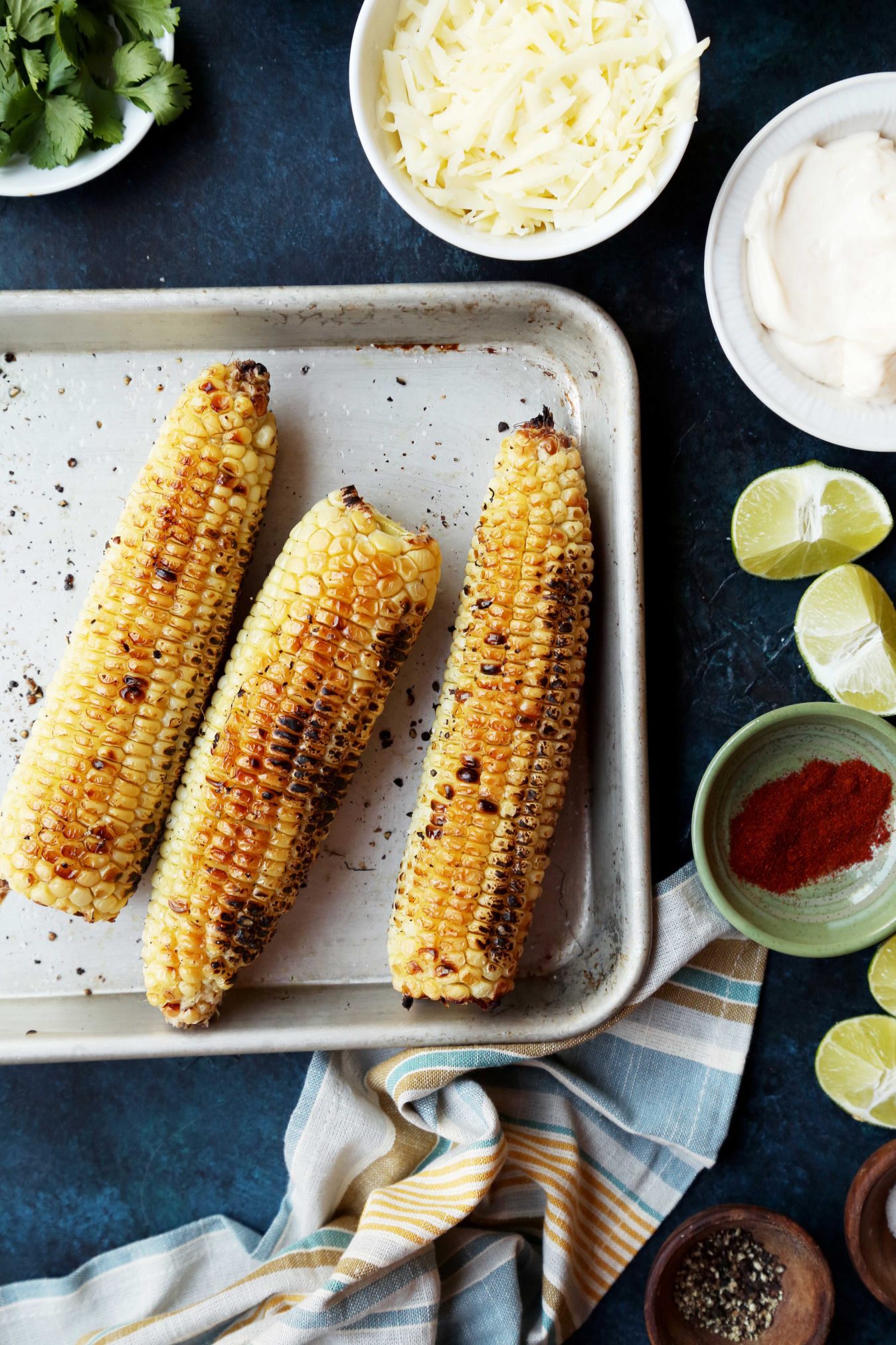 **Note: Mexican crema is like sour cream, but a but thinner and more rich, if that’s even possible. You can find it at most grocery stores in the hispanic fridge section. If you can’t find it though, feel free to use sour cream instead. It’ll work! Cotija cheese is a dry crumbly Mexican cheese. It’s really common now, but grated parmesan will work great too. ** 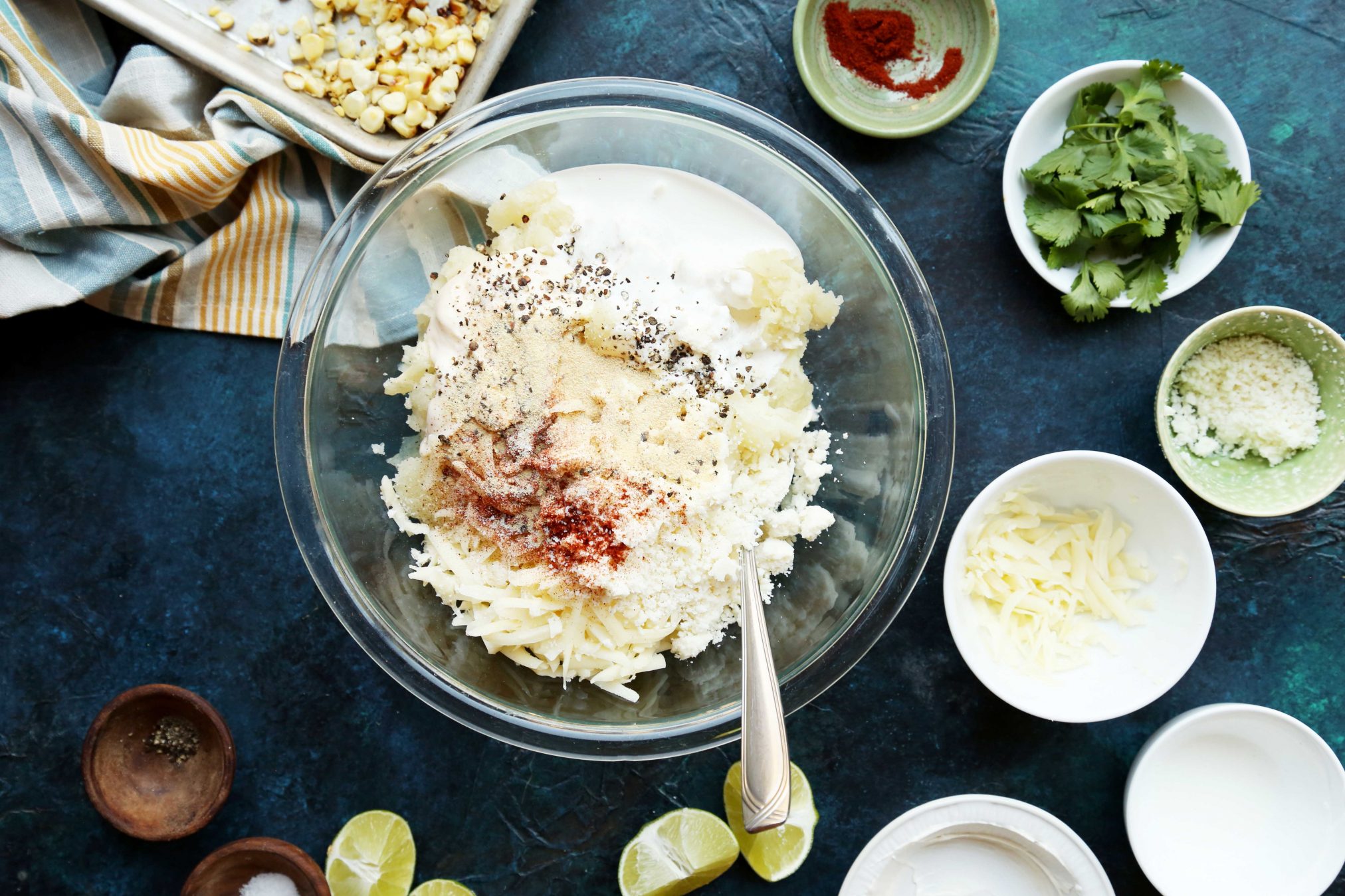 Mash together until somewhat smooth. You can leave it somewhat chunky if you’d like. I prefer some bits of potato running throughout. Then add in the the corn, lime zest and chopped up cilantro. Give it a taste and adjust seasoning accordingly, adding more salt, pepper or chili powder as needed. 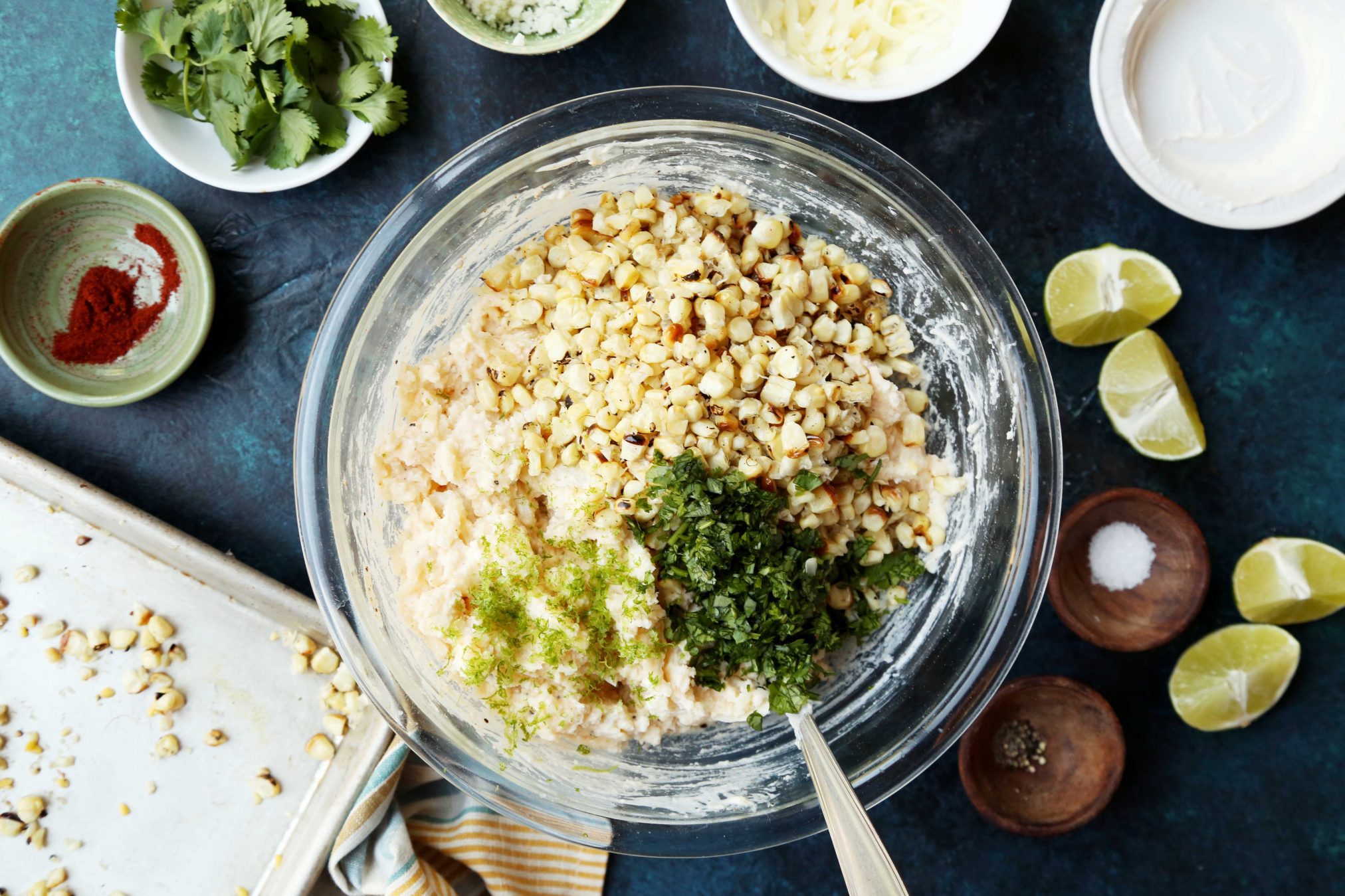 Divide the filling among the potato shells, make sure that you divide it evenly among each so that they’re all the same size. Then top each with more shredded Monterey Jack cheese. Lesson number 1 with twice baked potatoes: with cheese more is definitely better. 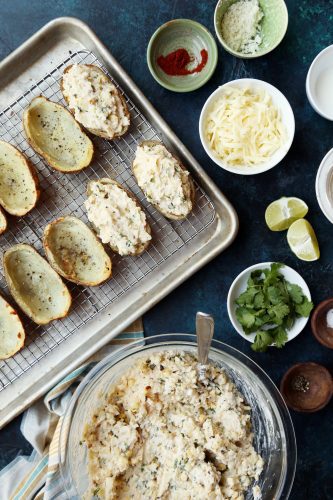 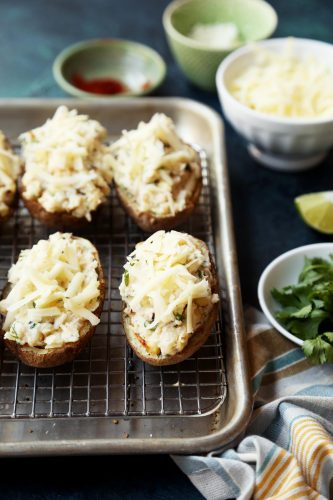 Return to the oven and bake until the potatoes have warmed through and the cheese on top has melted. Place the potatoes under the broiler to brown the tops of the cheesy potatoes. 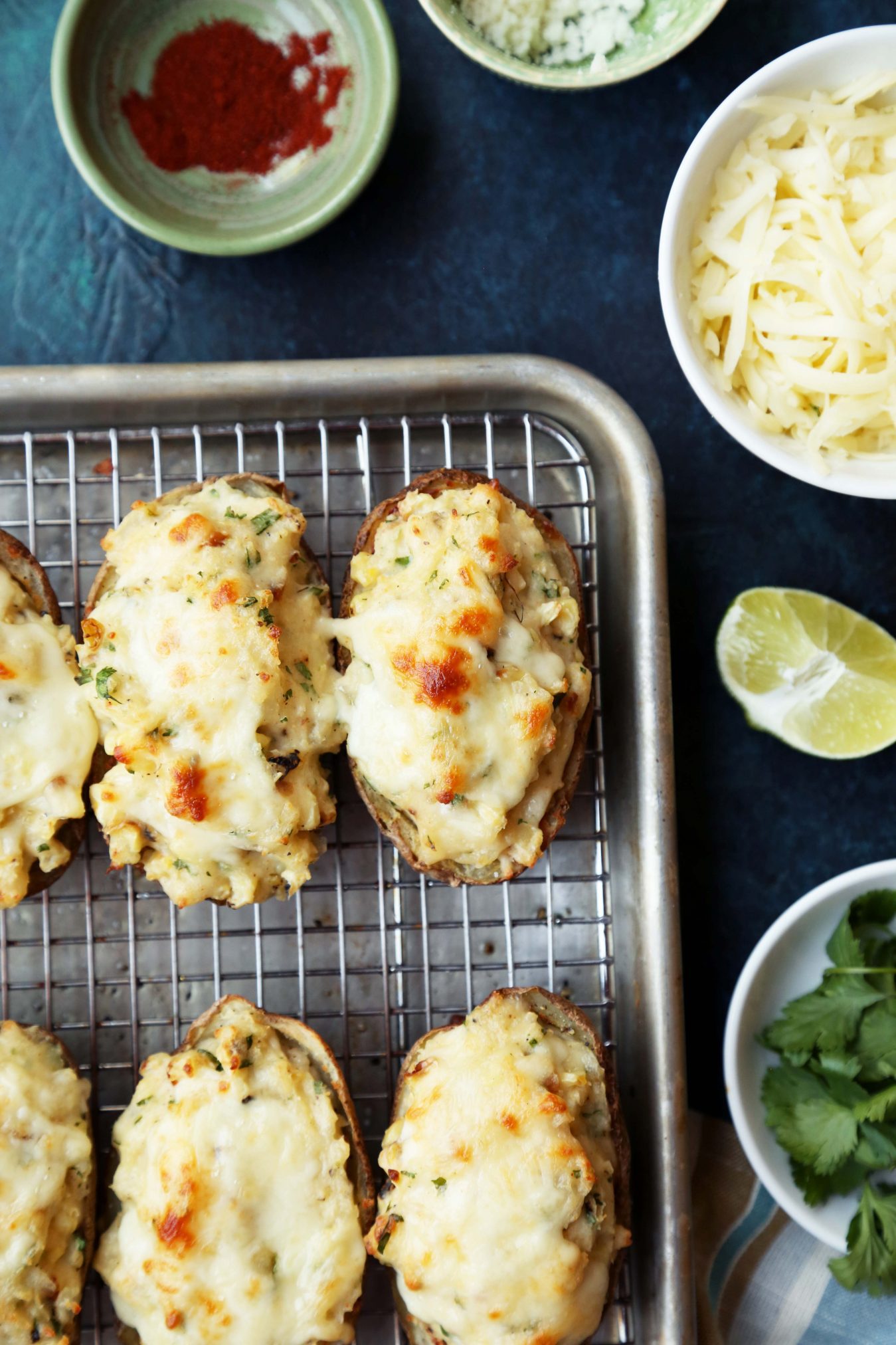 Remove the potatoes from the oven and top with more charred up corn, crumbled cotija, fresh cilantro leaves and a dusting of chili powder. Just like a traditional Mexican street corn. 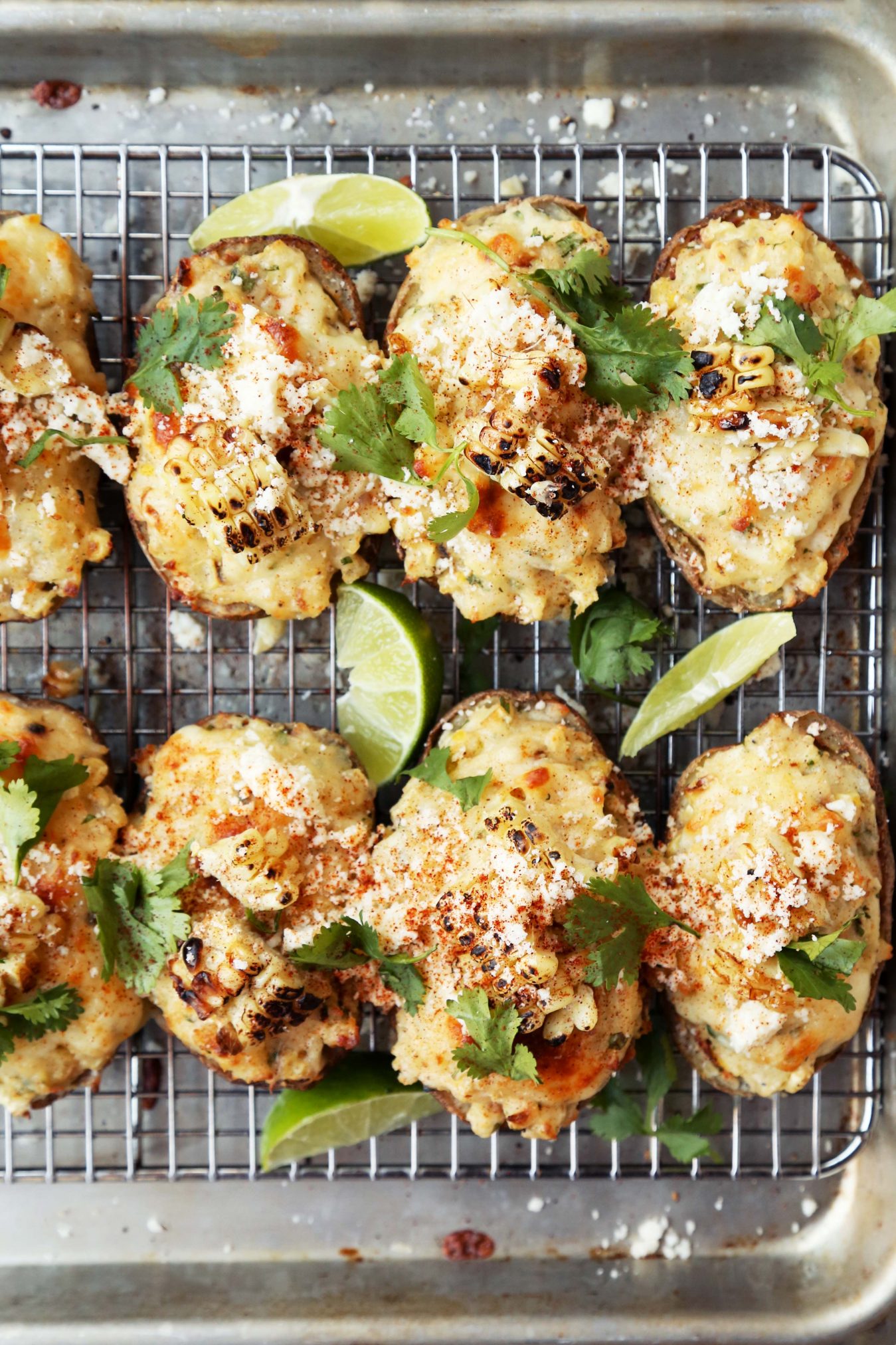 Serve the potatoes warm with wedges of fresh lime on the side, and don’t forget the cold beer. Leftovers can be stored in the fridge and warmed up in the microwave or in a preheated 350 degree F oven for about 5 to 8 minutes. Then re-garnish with fresh cilantro and cotija. 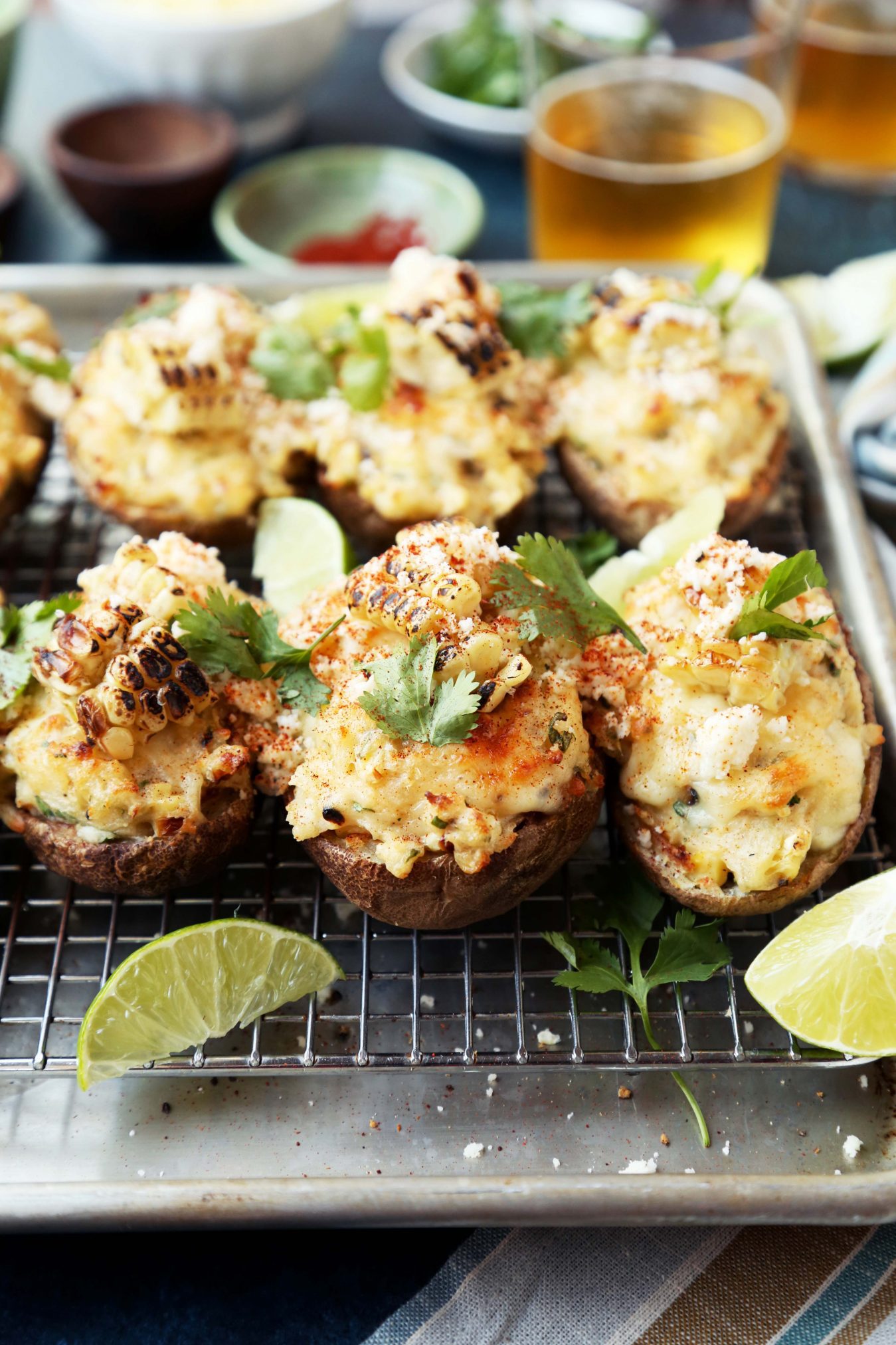 These are obviously vegetarian, but if you’re like Julian who just really needs to have some kind of meat in every meal, then bacon would be a great addition. Let’s be honest though, when is bacon not a good addition to a dish? 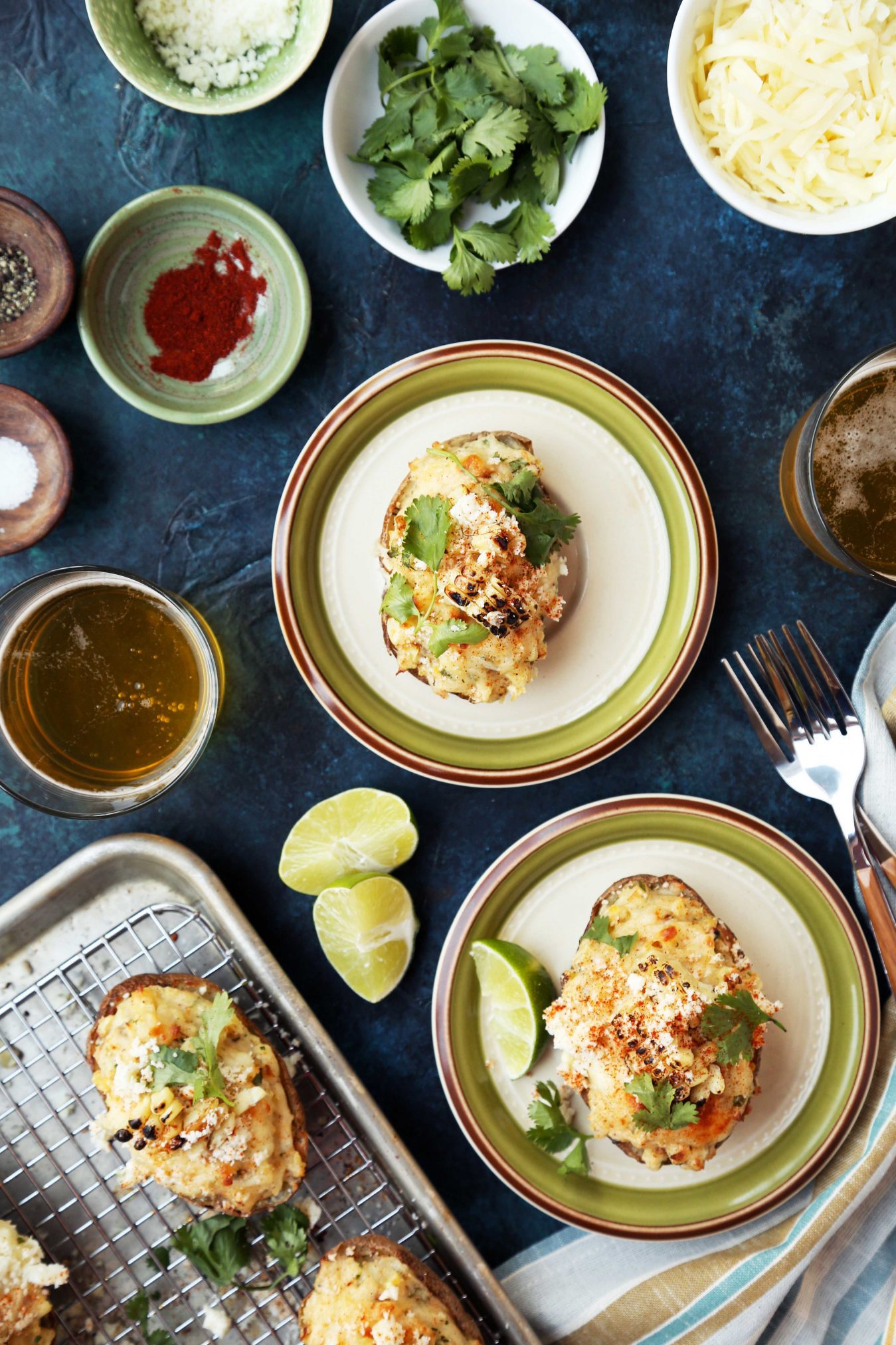 I know this is one of those recipes on my site that might be a little too weird for people to try, but I promise I won’t steer you wrong. Potatoes and corn mixed together are a winning combination. Give it a try first before you say no. Pinky promise? 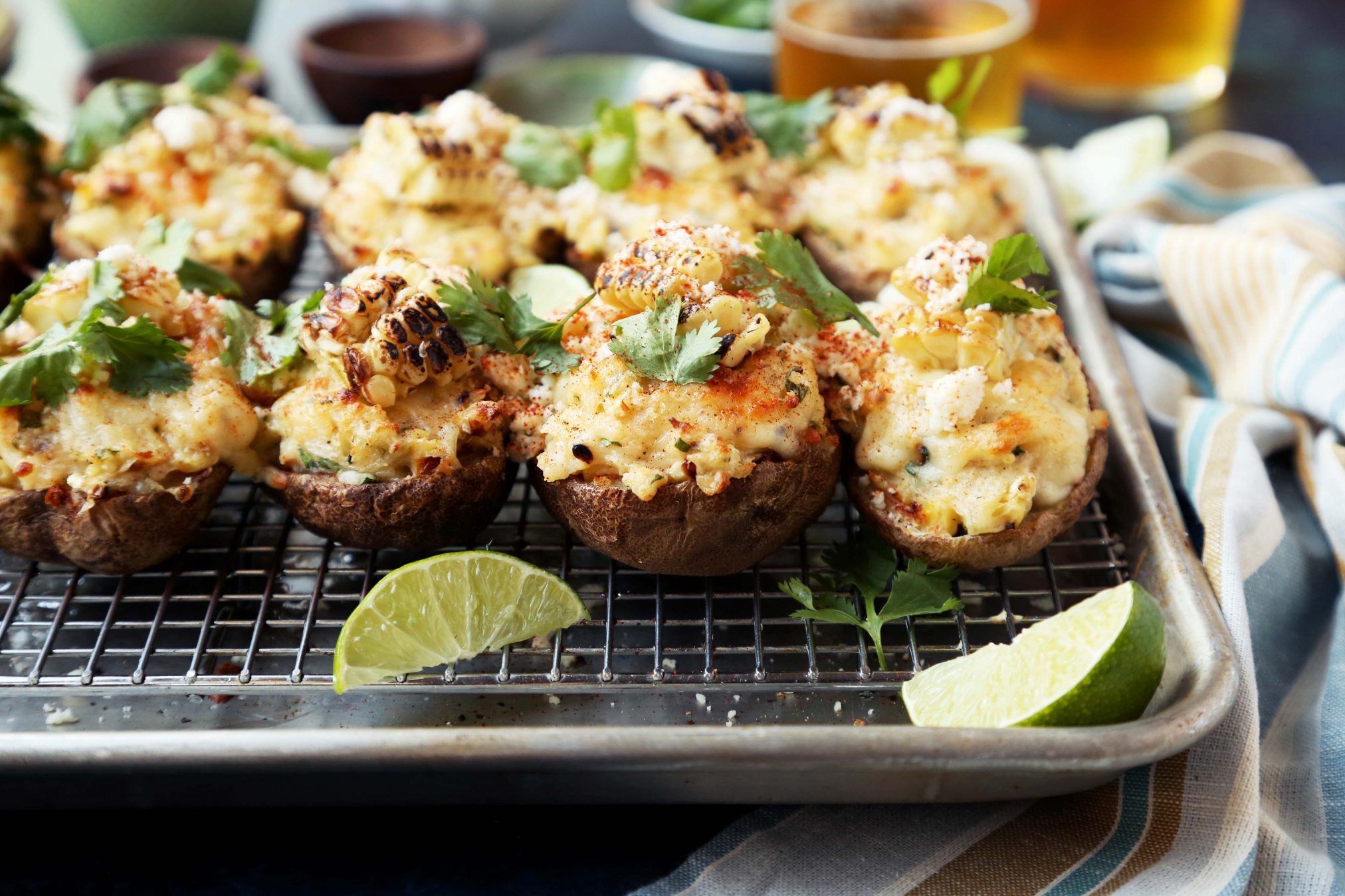 These are great for all of your 4th of July/summer BBQ needs. Pin it so you can remember to pull it out the next time you’re in need of a great appetizer, snack or side dish. You bring this to a summer party and everyone will think you’re the coolest kid in the block, I guarantee it. 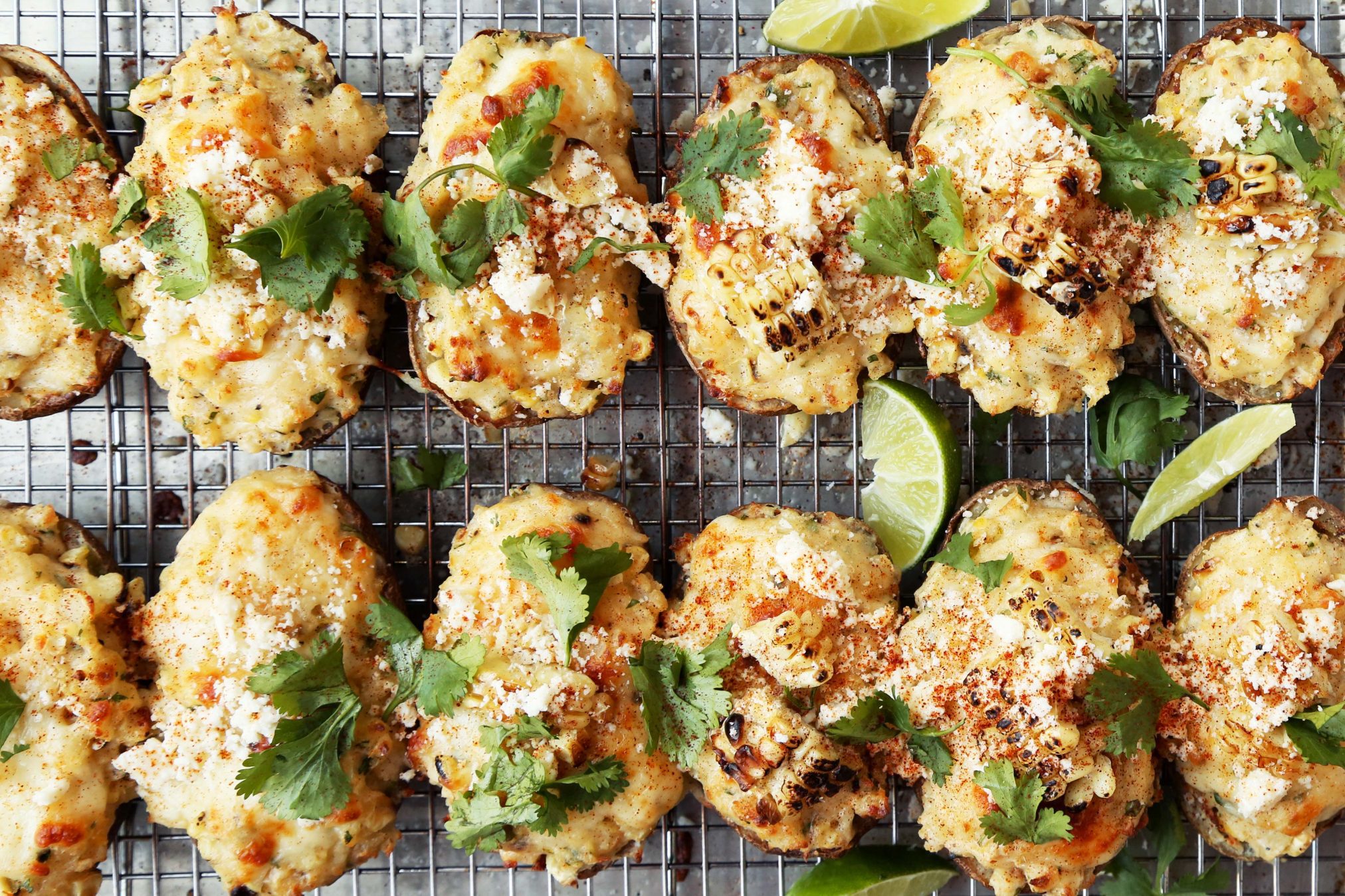 So I mentioned this last time, but Saveur Magazine is hosting their annual Food Blog Award nominations right now as we speak. If you have a few minutes to spare, head on over to their site, and nominate your favorite food blogs. If one of your favorite food blogs happens to be mine, and you enjoy the work I put out, I’d be ever so grateful if you nominated The Candid Appetite for either the “Most Inspired Weeknight Dinners” category or “Best Photography.” I promise I won’t harper too long on this, but I figured why not give it a go. Thank you so much! 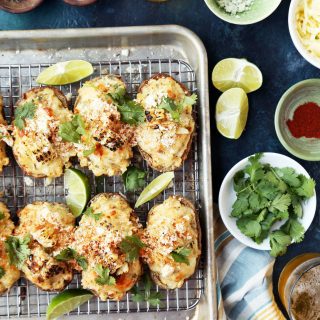