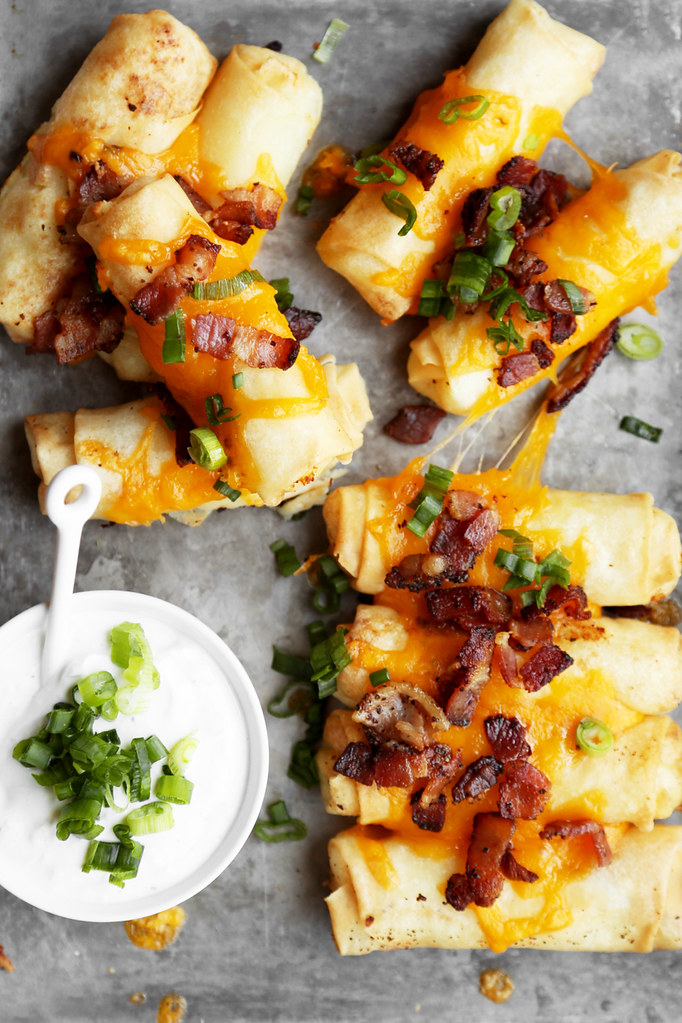 Since I’ve met Julian all he’s ever talked about is the Grand Lux Cafe. For the purposes of this story and my sheer laziness to have to type Grand Lux Cafe in it’s entirety, each and every time I mention it, we’ll refer to it from now on as GLC. So like I was saying, Julian has always been the GLC this and the GLC that. This one time at GLC….I once had this amazing “fill in the blank” at GLC. I want to get married at GLC. It’s kind of crazy how often he brings that restaurant up. The reason behind this whole crazy fascination is that he used to work at GLC in LA years ago, which has since closed down, and the only other location is in Vegas. As luck would have it, we were recently in Las Vegas and of course I heard so much about this place I had to go check it out. Julian just about lost his mind when he realized we were going to Vegas because as I’m sure you can guess, the first thing out of his mouth was “THE GLC!!” I think he was more excited that we were eating at GLC than actually having a few days off without any work or talk about work.

Anyhow, we get to GLC and I order a strawberry martini because apparently that’s what I’m supposed to order and drink. P.S. I preferred the strawberry moscow mule he ordered instead. Then we get an order of spring rolls to share. But these aren’t just any spring rolls, they’re loaded baked potato spring rolls. The exact same spring rolls Julian had always mentioned in conjunction with GLC. I hate to admit when he is right, but when the guy is right, the guy is right. So I practically had the entire order myself and I finally understood what all the huff was about. I quickly came to the realization that all of the spring rolls I eat from then on should be filled with mashed potatoes and topped with lots of cheese and bacon.

We ordered a salad and a few other things to share and they were good, I can never resist a chopped salad on any menu, but the highlight for me was definitely those spring rolls. So here I am now, fulfilling my promise to myself to recreate them at home. They’re rather easy to make, just a bit tedious to fill and wrap but if you make a bunch at a time and just freeze them, the next time you want a loaded baked potato spring roll, you can just open your freezer and pop them into some hot oil. Oh also, if you ever find yourself in Las Vegas, be sure to visit GLC. 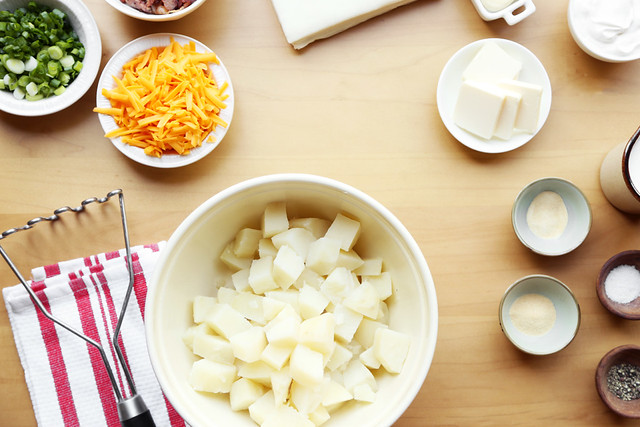 I think I might’ve mentioned once or twice (more like a million times) how much I love potatoes. Just in case I haven’t said it enough already, I’ll go ahead and say it once more. I really love love love LOVE potatoes. It’s the best vegetable in all the world. Let’s take a trip down memory lane with our Baked Potato Sliders, Carne Asada Fries, Chicken Pot Pie with a Baked Potato Crust, Potato and Chorizo Mac and Cheese and of course, Potato Tacos. While I’m at it though I’ll share a few more like these Cuban Potato Balls or these Loaded Baked Potato Scones.

With all that being said, I think it’s important we start with our potatoes. Peel and dice a few baking potatoes and transfer them into a large pot. Fill with cold water and bring to a boil. Cook for about 18 to 20 minutes or until fork tender. Drain and transfer to a boil. Season with salt, pepper, garlic powder, onion powder, butter and a splash of buttermilk. 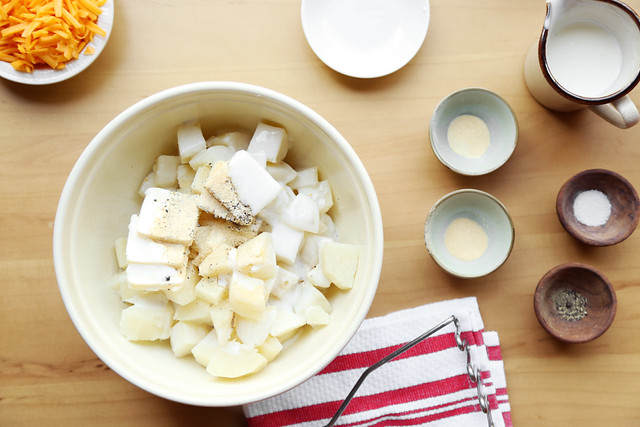 **Note: The butter and buttermilk helps get the potatoes to the right consistency. You don’t want to add to much of either (as you normally would) because that’ll add too much moisture to the potatoes.**

Mash until smooth and lump free. Give it a taste and adjust seasoning accordingly. You might need to add more salt, pepper, garlic or onion powder, depending on your taste preference. 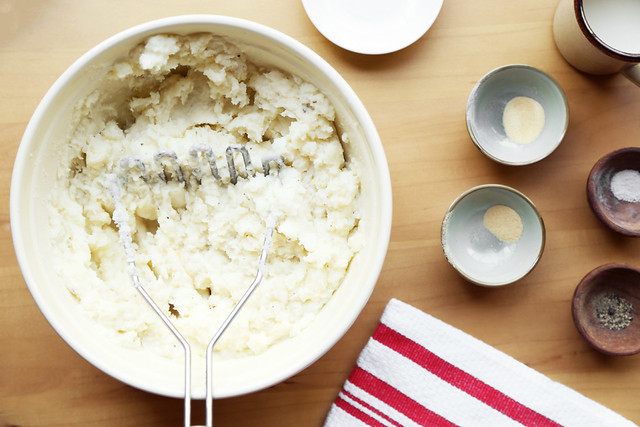 Set the potatoes off to the side and allow to cool down slightly.

**Note: You don’t want to fill the spring roll wrappers with hot potato filling because it’ll soften them too much.**

In the meantime, let’s make the dipping sauce. In a small bowl, combine the sour cream, fresh grated garlic, salt and pepper. 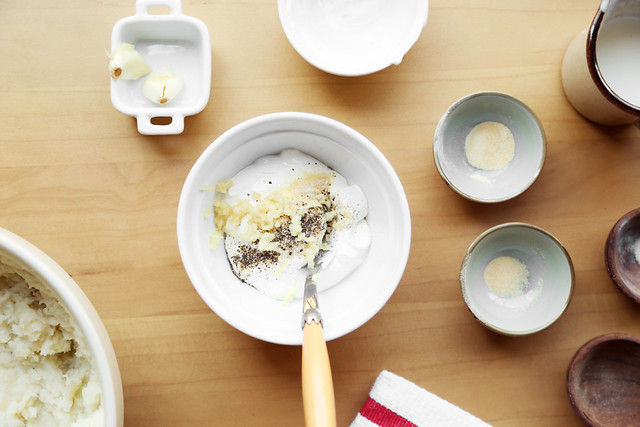 Stir until evenly combined and top with slices scallions or chives (just like in baked potatoes). 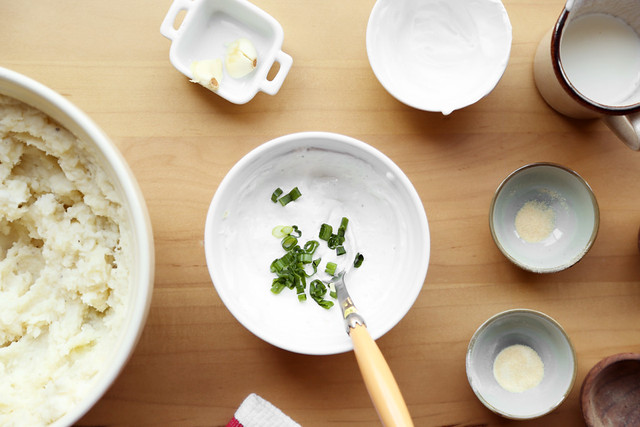 Cover with plastic wrap and store in the fridge until ready to serve. It’ll give the sauce a chance to develop it’s flavors and soften that raw garlic a bit.

**Tip: You can make this sauce a few days in advance and just keep it well wrapped in the fridge for up to 4 days.**

Let’s get to filling and rolling these spring rolls. I’m using Tyj Spring Roll pastry for this. It has a crunchier texture when fried as opposed to egg roll wrappers that are a bit flakier in texture. I found mine at my local Vietnamese grocery store. If you have one near you, that’s probably your best bet. 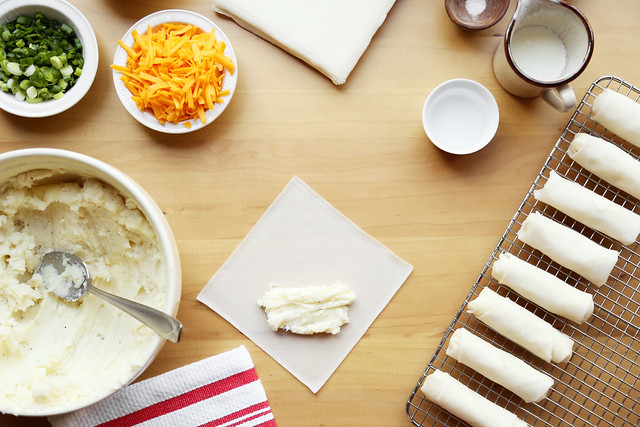 Add a thin log of potato filling right in the center. Then bring the two side corners to the center and roll into a log, sealing the edge with a bit of water. Stephanie from I AM A FOOD BLOG has a great gif on her site if you want to see how to roll them properly.

Keep filling around rolling until all the potato filling is used, placing the finished rolls onto a wire rack. 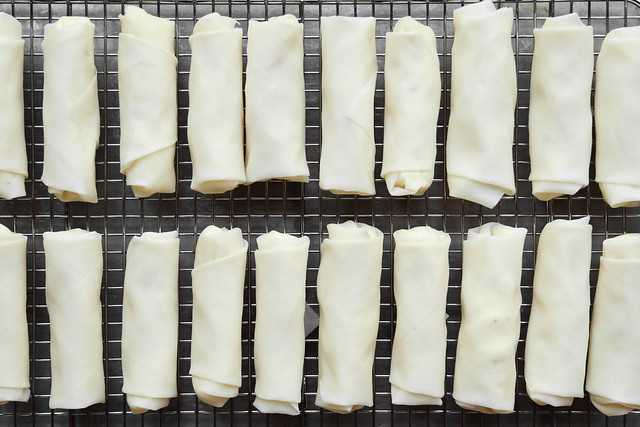 **Note: Make sure you roll them into tight logs because if you leave any air bubbles in their the filling will find it’s way out of the wrappers and into the oil and then no one is having fun.**

**Tip: I like to chill the rolls in the freezer for at least 30 minutes before frying. It allows the potatoes to firm up and the skins to dry out a bit.** 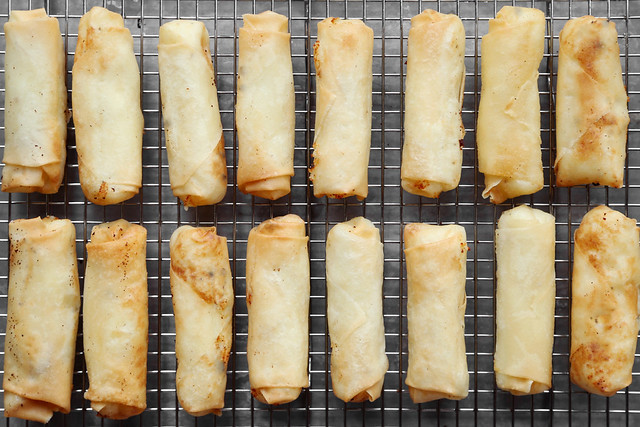 Fry in a skillet or pot, filled halfway with vegetable oil, until golden brown and crunchy on all sides. Drain and then place on a wire rack set over a baking sheet to catch any drips.

**Note: For best results, fry the rolls in batches so that you don’t overcrowd the pan and then drop the temperature of the oil and then they wont fry evenly and it’ll be a mess.**

Place the fried rolls on a baking sheet, snug as bugs and then top with copious amounts of shredded cheese. 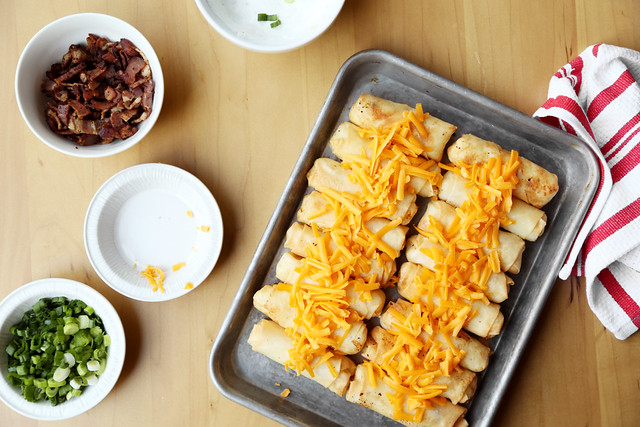 Place the rolls in the oven for a few minutes to reheat them and to melt the cheese. Once bubbly, remove from the oven and finish them off with a sprinkling of chopped crispy bacon and sliced scallions. 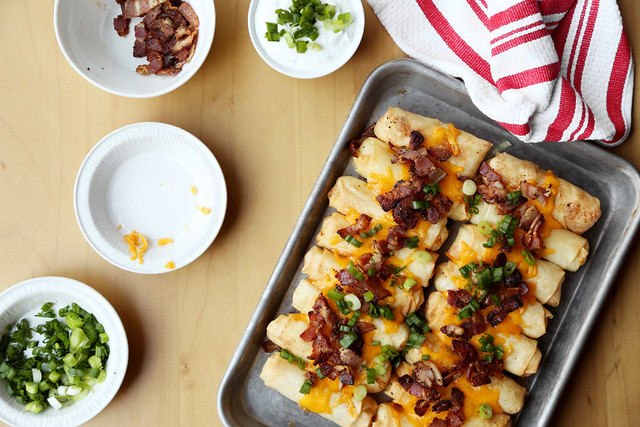 You can allow them to cool down a bit before serving or digging in all by yourself, as you eat one roll after another standing right over the pan over your sink. I mean, not that I did that. Of course not. I shared these rolls. I just had one. Maybe two. I definitely didn’t eat half of them, that’s for sure. 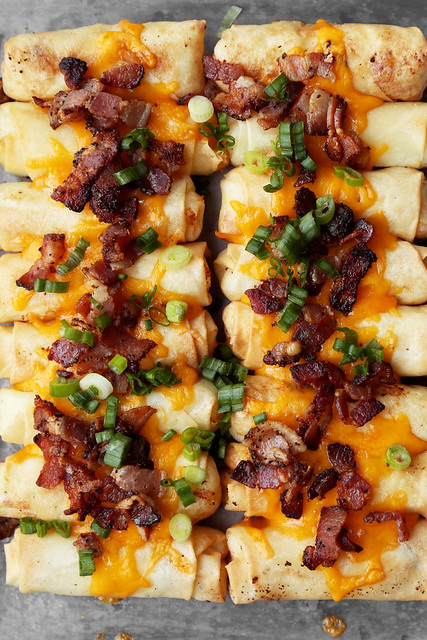 Don’t forget to serve them with the sour cream dipping sauce we made earlier. It wouldn’t be a loaded baked potato anything without sour cream making an appearance. Am I right ladies and gentlemen? 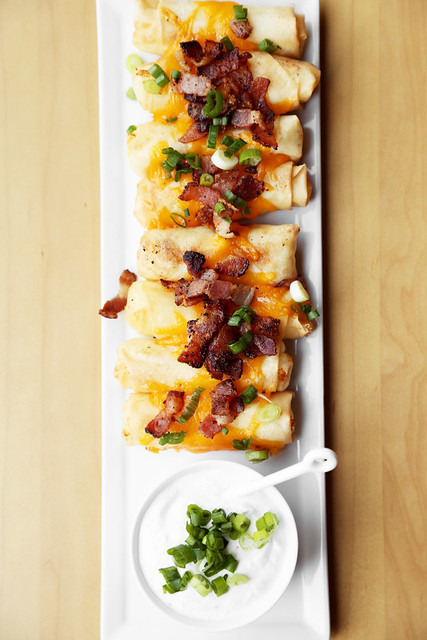 You can make a bunch of these and keep them in the freezer and just fry them (straight from the freezer no need to thaw) whenever you want a delicious snack. It’s great to have on hand for those times when you need an appetizer on the fly because people dropped by without plenty of notice. Or if you feel lazy one day and don’t feel like cooking too much, you’ll remember that you stored a bunch and you’ll be thankful that you did. Either way, you’re going to love them. Enjoy! 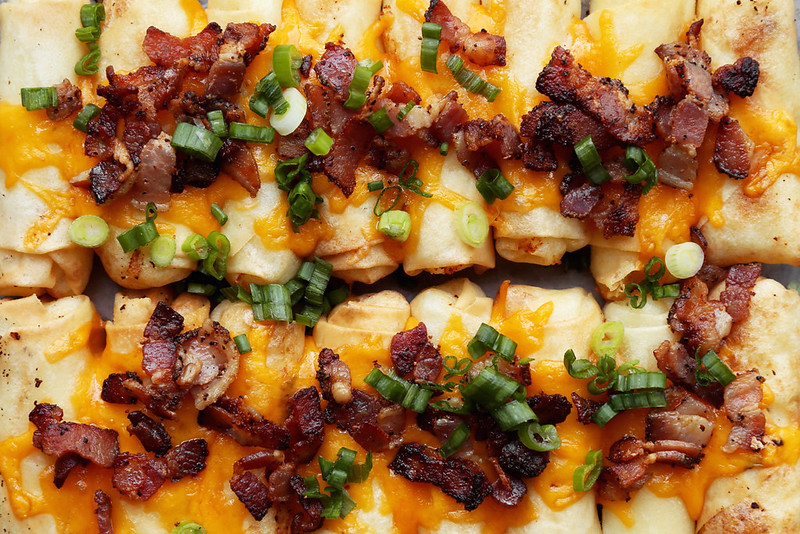 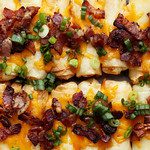 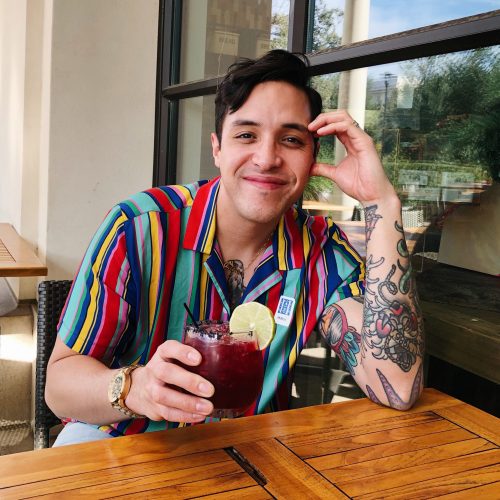