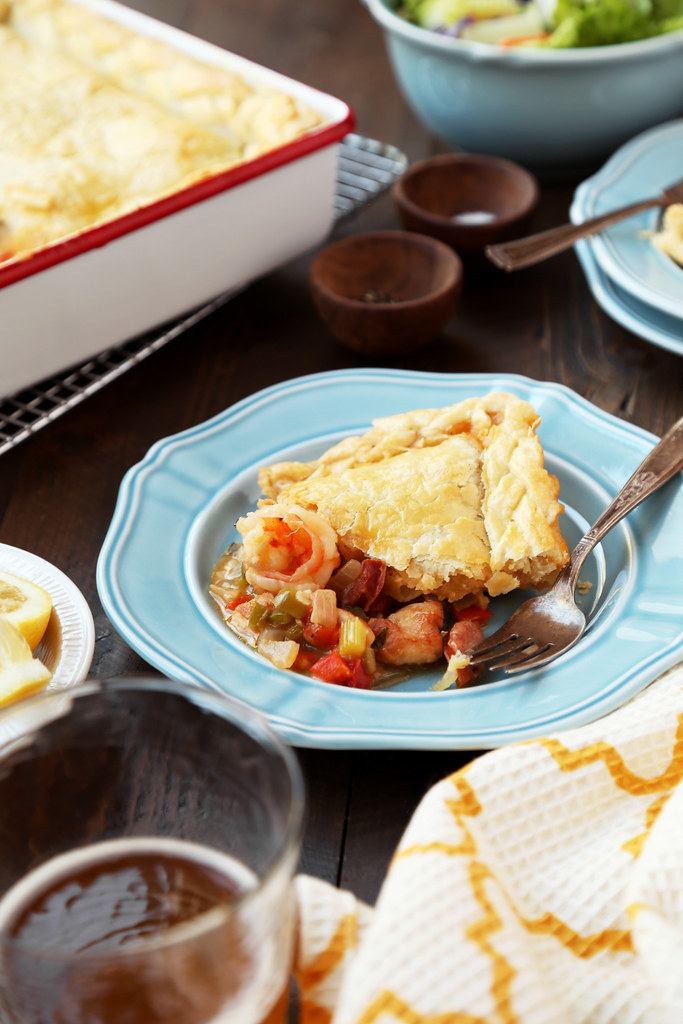 To celebrate the fact that I’m in New Orleans for the rest of the week, I bring to you this Jambalaya Pot Pie. It’s exactly what you think it is. Jambalaya meets chicken pot pie and they immediately go on a date, because everyone needs love. They hit it off right from the start, and can’t get enough of each other. Then one thing leads to another and before you know it…BOOOM…out comes this mega fusion crazy dish. It has all the makings of a traditional jambalaya, which happens to be one of my favorite Cajun dishes, but with a chicken pot pie look and feel to it. It’s what you serve for dinner when company is coming over and you want to impress them. Or what you serve your family when you’re bored and tired of the normal week to week meals you always make. Step out of the box and spice things up a bit. The people of New Orleans would want you to let loose. I want you to let loose. Explore more in the kitchen. You owe it to yourself.

I’m in New Orleans this week for a couple of reasons. One of which is to eat and drink as much as possible (that should go without saying, though). Whenever I make a trip out here, I have this constant internal struggle of wanting to eat everything in sight, and never having enough time (or space) to eat everything I’d like to. I do try my best though and give it all I have. Most importantly, I’m here to visit and get some work done with my friend Joy—we’re working on her next cookbook (the woman is a machine I swear to you). She’s doing all the work, I’m just here to photograph it, and convince her to stop working so we could get a drink.

I wanted to make sure we could all somehow enjoy the Big Easy together, so I thought the best way to go about this, is to share a New Orleans inspired recipe. In case you’re in need of more Cajun recipes to fuel you for the week, I’ve got you covered. This Jambalaya Pizza is calling out your name for your Friday night festivities. Friday night pizza party anyone? Red beans and rice is my second favorite New Orleans dish and I’ve gone ahead and turned it into portable pastries with these Red Beans and Rice Empanadas. You better believe that I’ll be eating an unhealthy amount of po’boys while I’m here, so why don’t you join me? These Fried Shrimp Po’boy Sliders are hard to resist. Need an excuse to drink in the morning? Don’t we all. These Good Morning Margaritas are inspired by a great restaurant in NOLA, called Elizabeth’s. 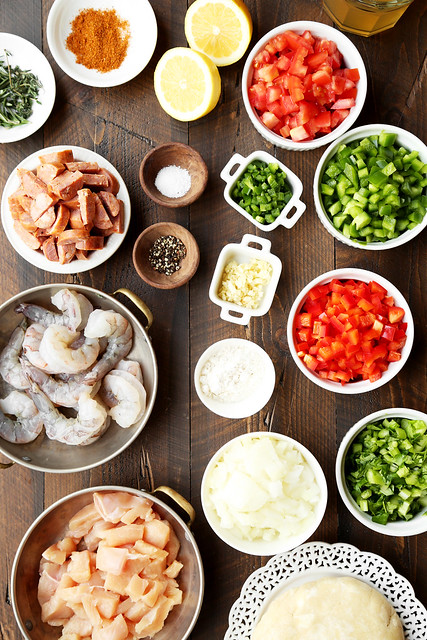 Much like a traditional Jambalaya, we’re going to start by browning the chicken and sausage first. Start with the chicken, and then once browned, stir in the sausage and cook until crispy.

**Note: This develops flavor and color, so make sure that you have a large enough skillet and that the flame/heat is on medium-high. If your skillet is too small for all of the chicken and sausage, cook them in batches. If your pan is overcrowded, it’ll release too much moisture that it’ll end up steaming or boiling and not get brown at all.** 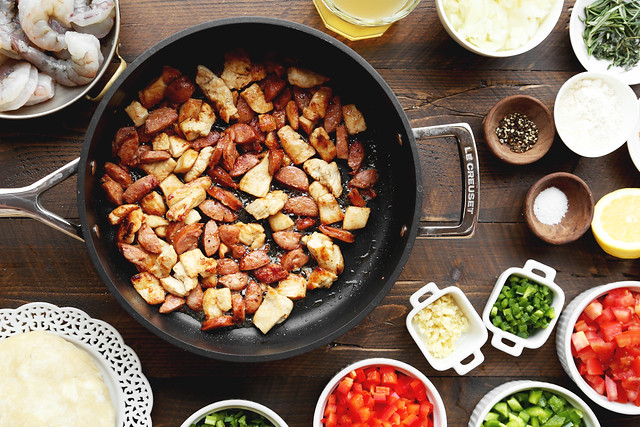 Once browned, transfer to a plate or platter and then stir in the veggies. This has all of the classic cajun veggies, onion, garlic, jalapeño, red bell pepper, celery and tomato. Cook until soft, about 8 to 10 minutes. Season with salt, pepper and fresh rosemary and thyme. If you have a few bay leaves on hand, stir them in. 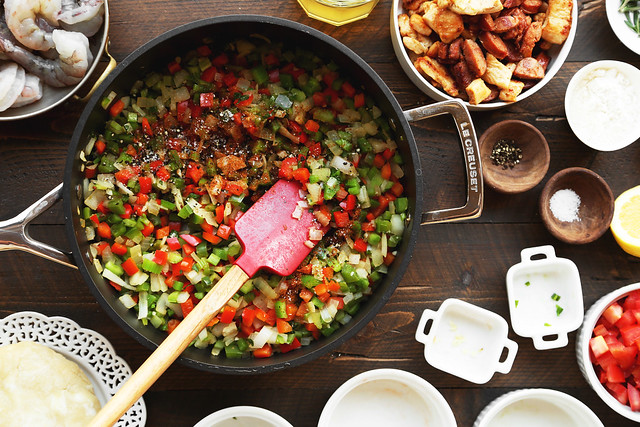 Sprinkle the flour on top and then stir and cook for about 2 to 3 minutes. Slowly stir in the chicken stock, Cajun seasoning blend, hot sauce, Worcestershire sauce, and lemon juice. Cook on low, stirring often, until the mixture has thickened. 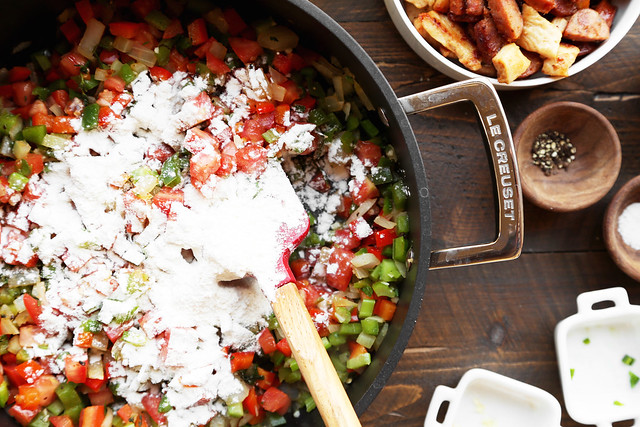 **Note: This is what is called a roux. It’s a mixture of some kind of fat, most commonly butter, and flour. They’re cooked together a bit and then either milk or stock is stirred in and it becomes thick. This is a great way to make a cheese sauce for homemade mac and cheese.** 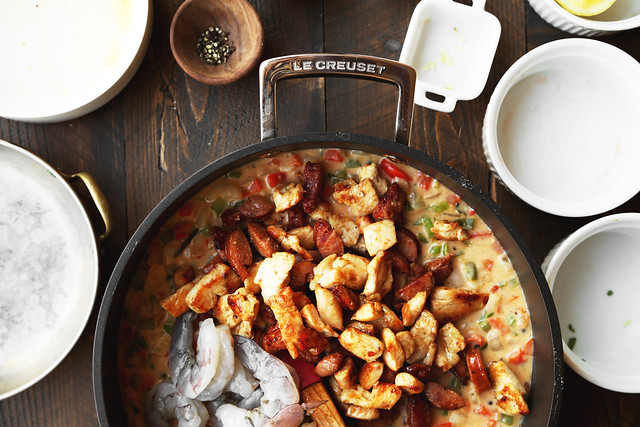 Once thick, stir in the cream and stir until well combined. Then return the browned chicken and sausage to the skillet along with the peeled and deveined shrimp.

**Note: The cream is completely optional, you can leave it out if you’d like. I like that tiny bit of cream to cut through the spiciness from the sauce. Also, classic chicken pot pie has that cream or half and half, so I want to keep things close to the original.** 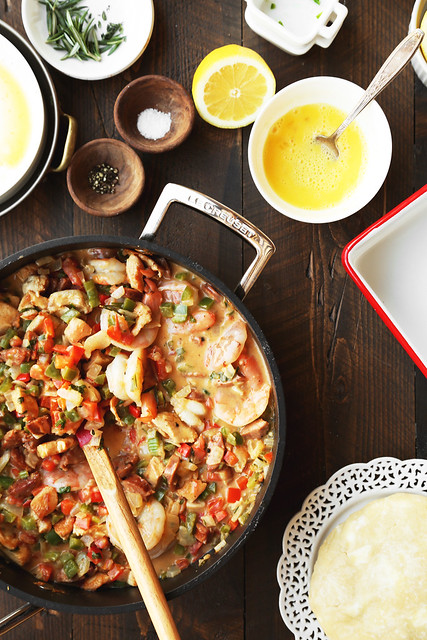 Remove the filling from heat and carefully pour into a oven-safe baking dish, any medium-sized shape pan will do. A deep dish pie plate will probably be best.

**Tip: You can also divide the filling among 6 to 8 individual ramekins, if you’re into personal pot pies.** 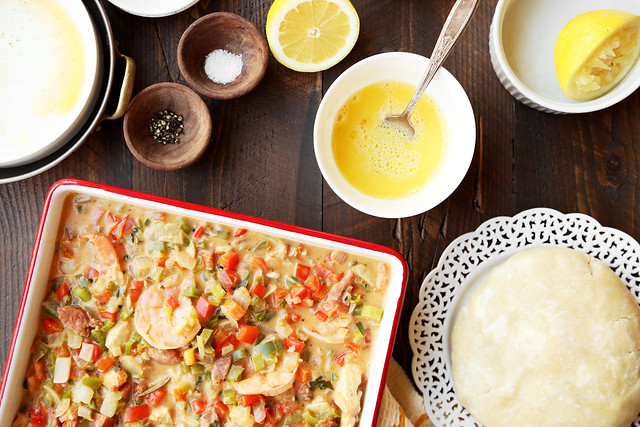 Let the filling cool down to about room temperature before topping with the pie crust. If the filling is too hot, it’ll begin to warm the pie crust too much and prevent it from getting flaky. You definitely don’t want that as the crust is the best part of any pot pie.

**Tip: Feel free to use store-bought pie crust if you’re not about that homemade pie crust making life. If you are, use this recipe from the Shepherd’s Pot Pie Post!** 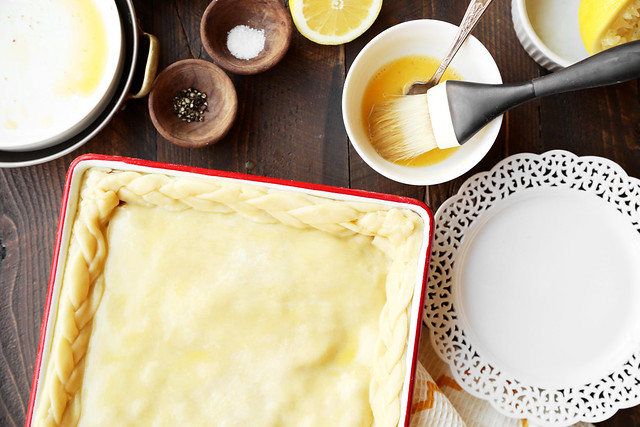 Once cooled, roll out the crust to about 1/4 of an inch thick and then carefully transfer to the top of the filling. Brush the top evenly and liberally with egg wash, this will make sure it gets golden brown during baking. Make a few slits on top to allow steam to escape.

**Tip: You can decorate the edges like I did, by cutting three long strips of dough the same length, and then braiding them together. Create one braid per side of your pan and then just lay it on top of the edge.** 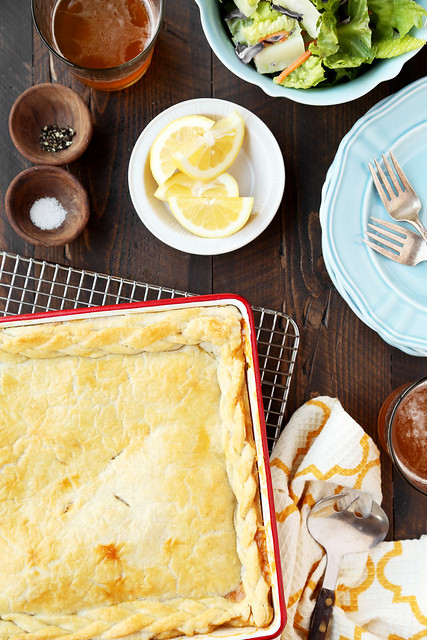 Serve the pot pie right out of the oven with a side salad (if you’re feeling healthy) or a scoop of rice (if you feel like living) the way classic jambalaya is served. 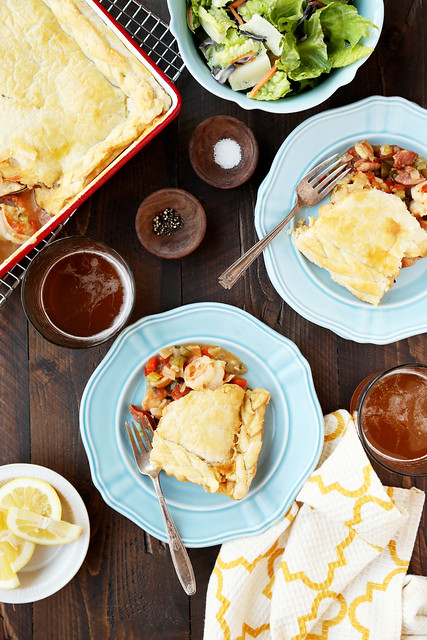 A couple glasses of New Orleans beer would also hit the right spot, if you can find some. My grocery store carries a few selections of Abita, and so I think that’s a good one to get your hand on if you’re into beer. That’s the end of my beer rant, I promise. 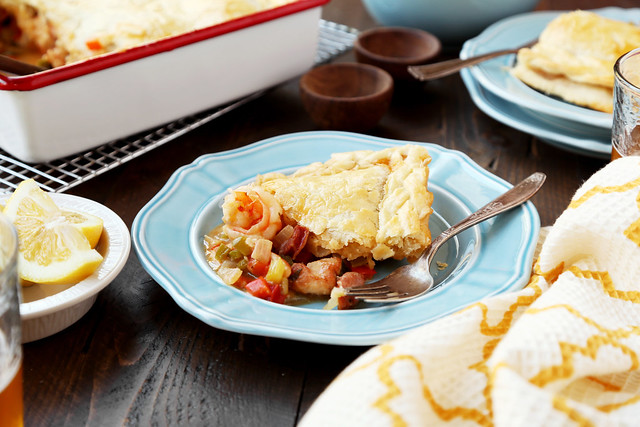 You can make this in the morning or the night before (the earliest) and then pop it into the fridge. Then, when ready to eat, just brush the pie crust with egg wash, and bake until golden brown and warmed through. It’s a great dish to prepare before work and then when you come home, like magic, you have dinner waiting for you. Sure you have to pop it into the oven, but that’s easy considering you don’t have to cook all night after working all day. 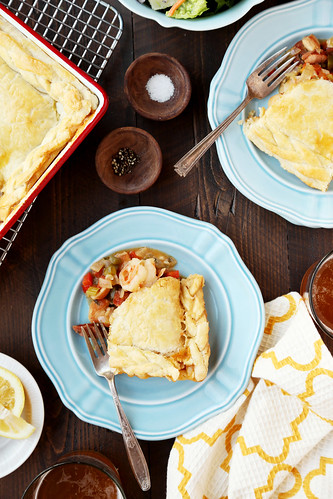 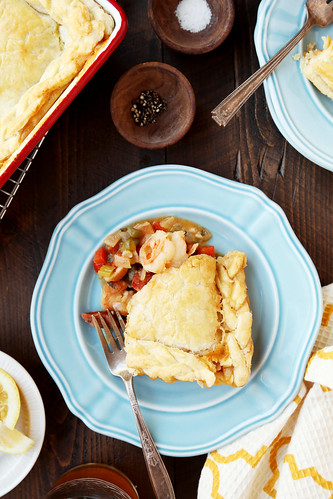 If you love chicken pot pie and jambalaya but have never tried them together in one mega dish, then you’ve been missing out. Don’t worry though because I’ve also been missing out. I’m sad that I’ve only now thought of combining these two incredible dishes, but as they say it’s better late than never. The good news is that we get to enjoy it now. I think this should be on everyone’s menu this week or weekend. 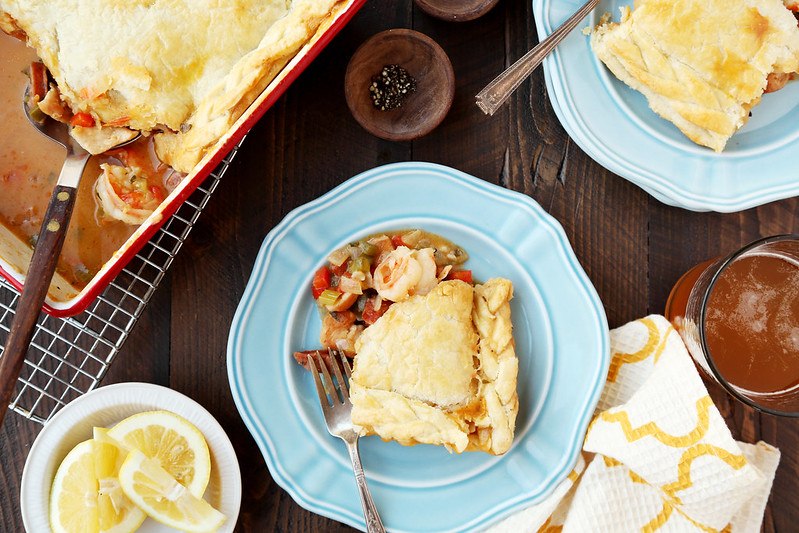 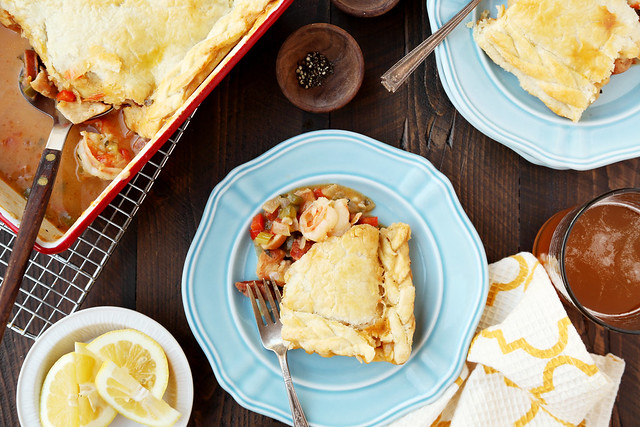