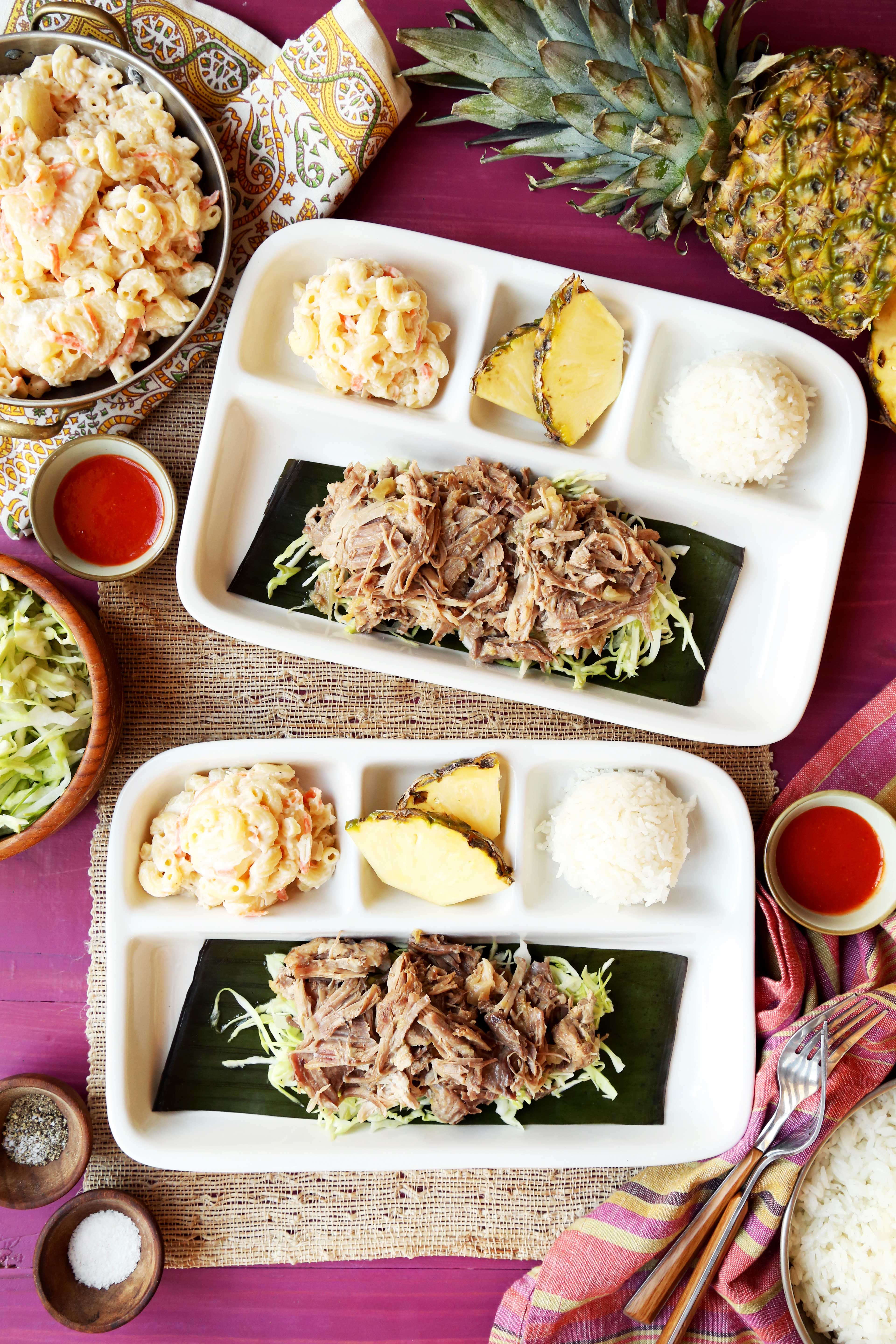 The first time I ate Kalua Pork in Hawaii last year was a life-changing moment for me. Sure, the great weather and the beaches and cocktails by the pool were amazing but my most lasting impression was the slow roasted pork that gets smoked underground covered in banana leaves. It’s served with traditional Hawaiian macaroni salad and white rice. It’s basically everything that would consist of my last meal. I can’t live without rice and I’m always 100% up for carbs on carbs so pasta salad served with rice is a dream come true to me. I’m no expert in Hawaiian cooking whatsoever, but I got an Instant Pot for Christmas and so I decided to give it a try for the first time ever. After I got through the fear of exploding appliances, I managed to cook this pork and now I’m never going back. 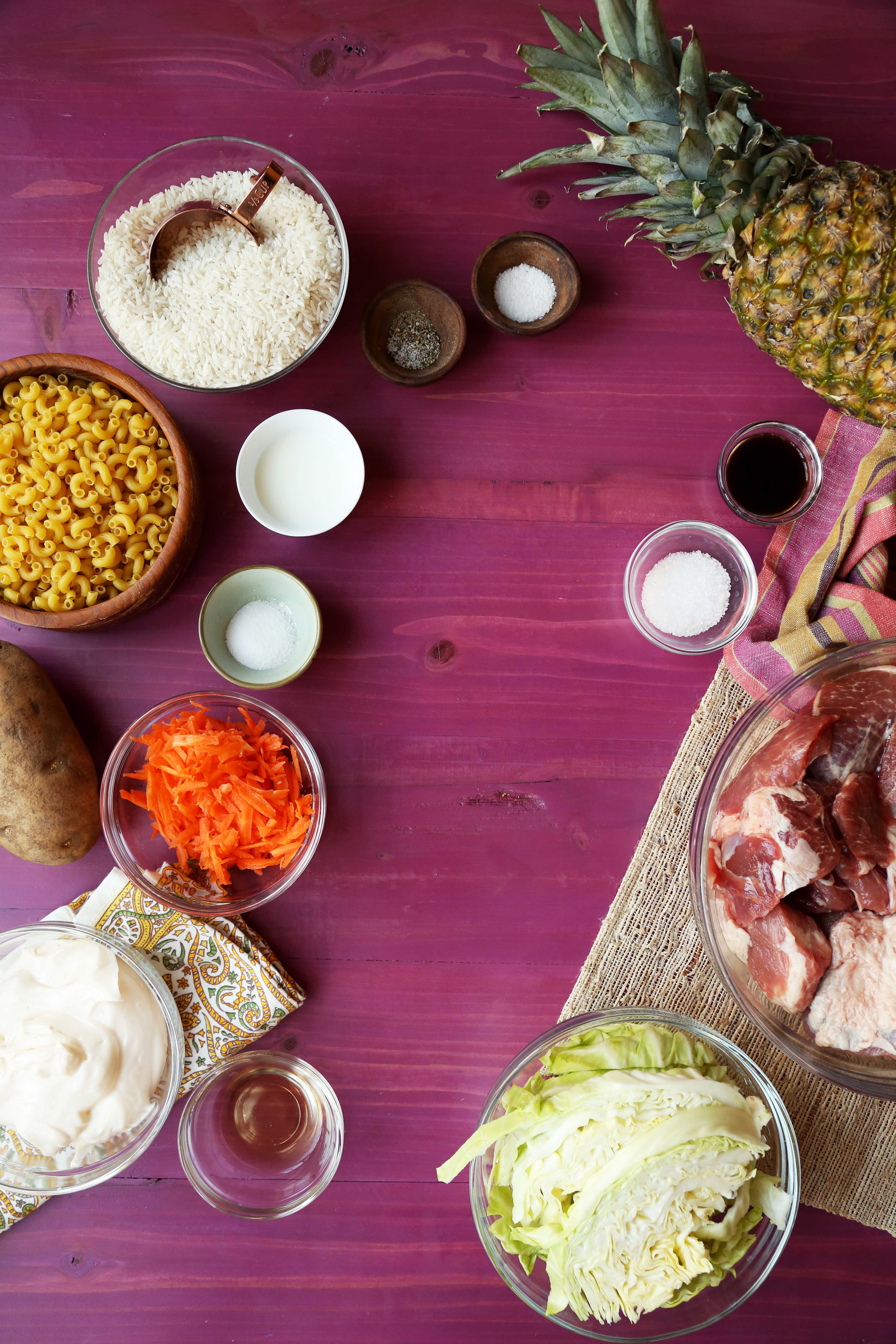 Let’s start by preparing the pork. In a large bowl, toss together the cubed pork with liquid smoke and Hawaiian salt. Set aside and allow to marinate at room temperature for at least 30 minutes.

**Note: I’m using a 4 lb boneless pork shoulder that has been cubed into small pieces. The liquid smoke gives the kalua pork that smokey taste, as if it was smoked underground for hours just like the original! If you don’t have Hawaiian salt, or can’t find any, you can just use kosher salt instead.** 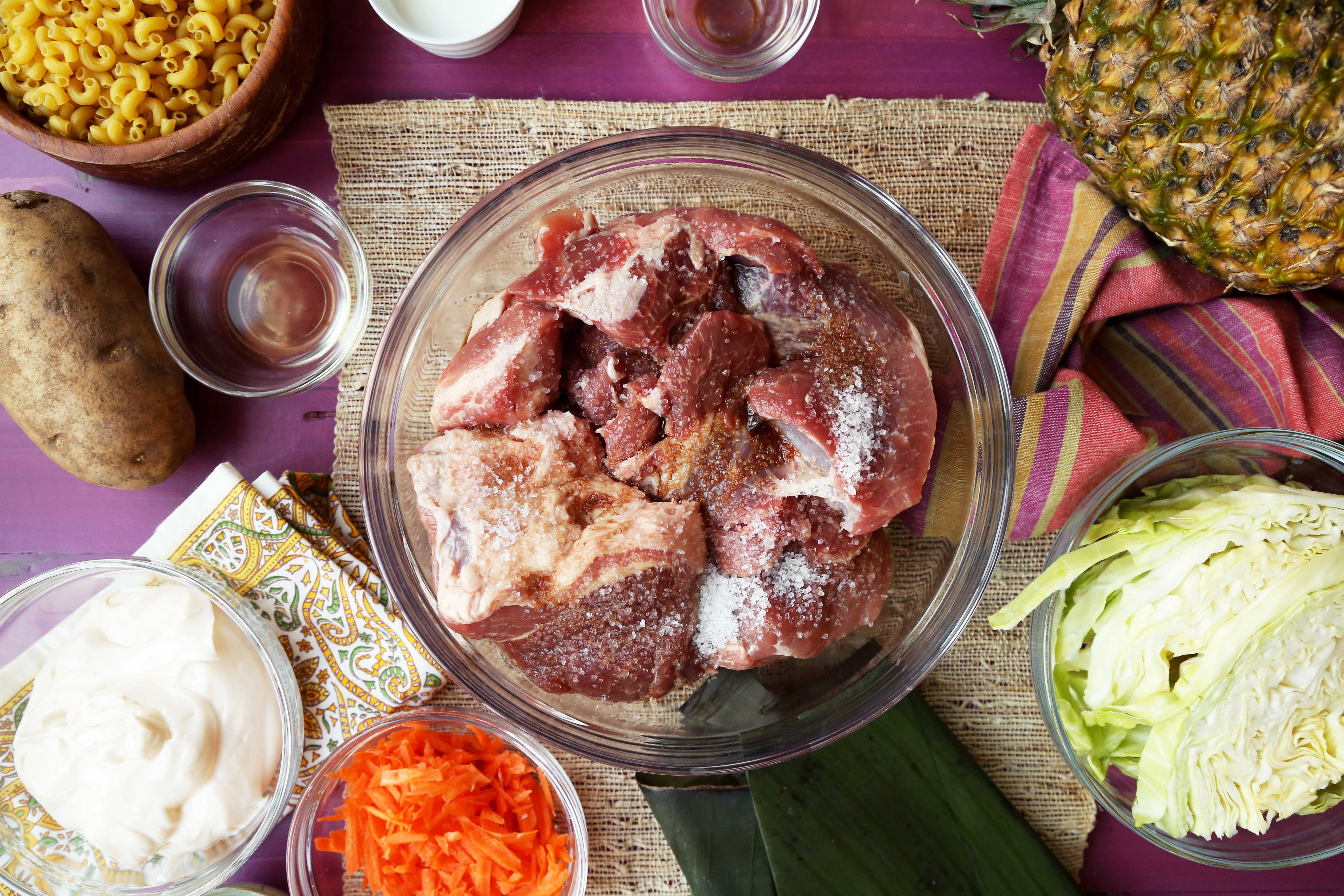 Line the bottom of your instant pot with banana leaves and pour in a cup of water. Arrange the marinaded pork in a single layer. Top and nestle in the sliced cabbage.

**Note: The banana leaves gives so much flavor to the pork, which is somewhat crucial since it’s so simply seasoned. You can find banana leaves in most Asian or Hispanic supermarkets.** 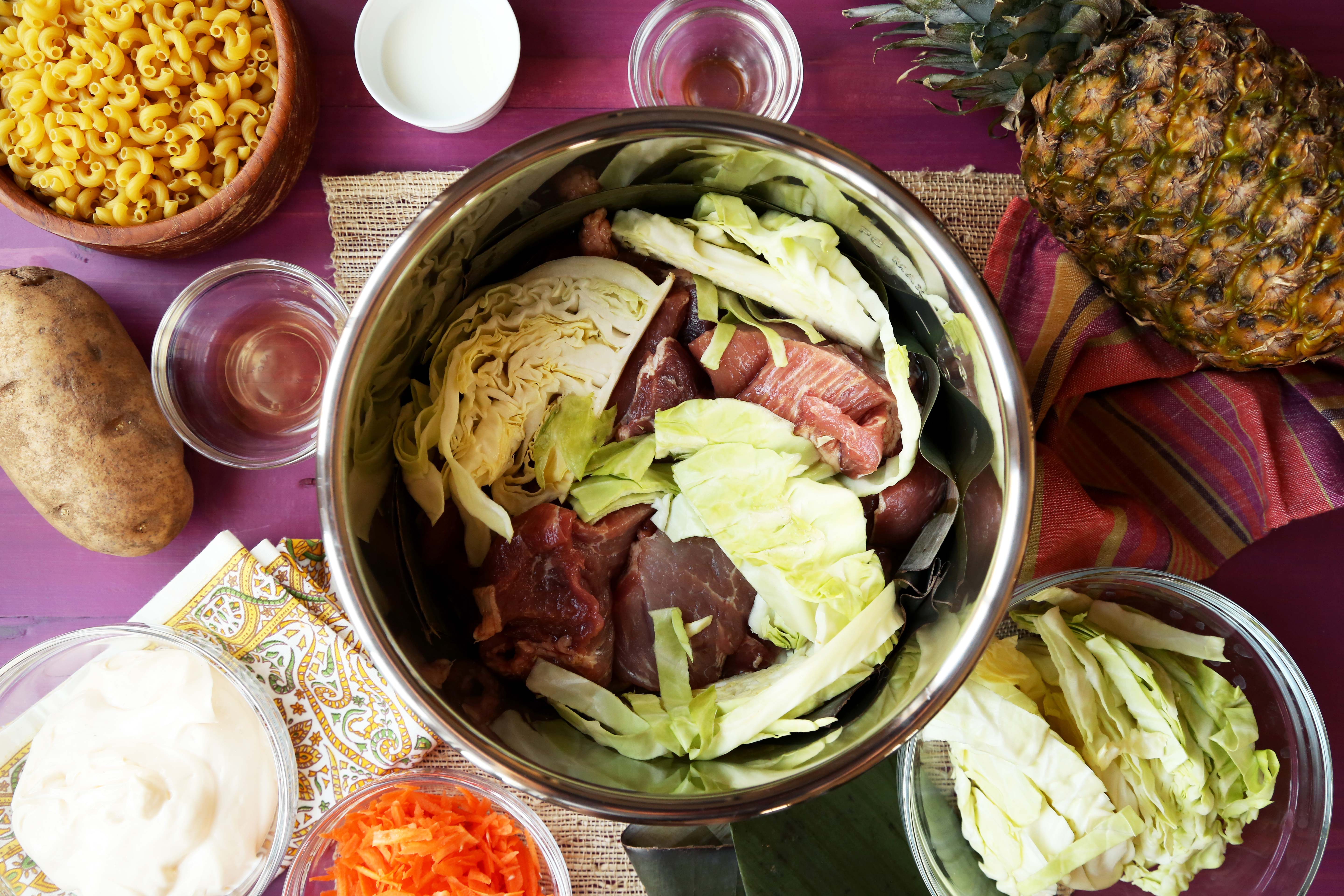 Cover the top with banana leaves and then pressure cook on high pressure for 1 hour, with a 15 minute natural release.

**Note: If you can’t find banana leaves, you can still cook the pork without it, just cook it for 45 minutes instead of an hour with 15 minute natural release as well!** 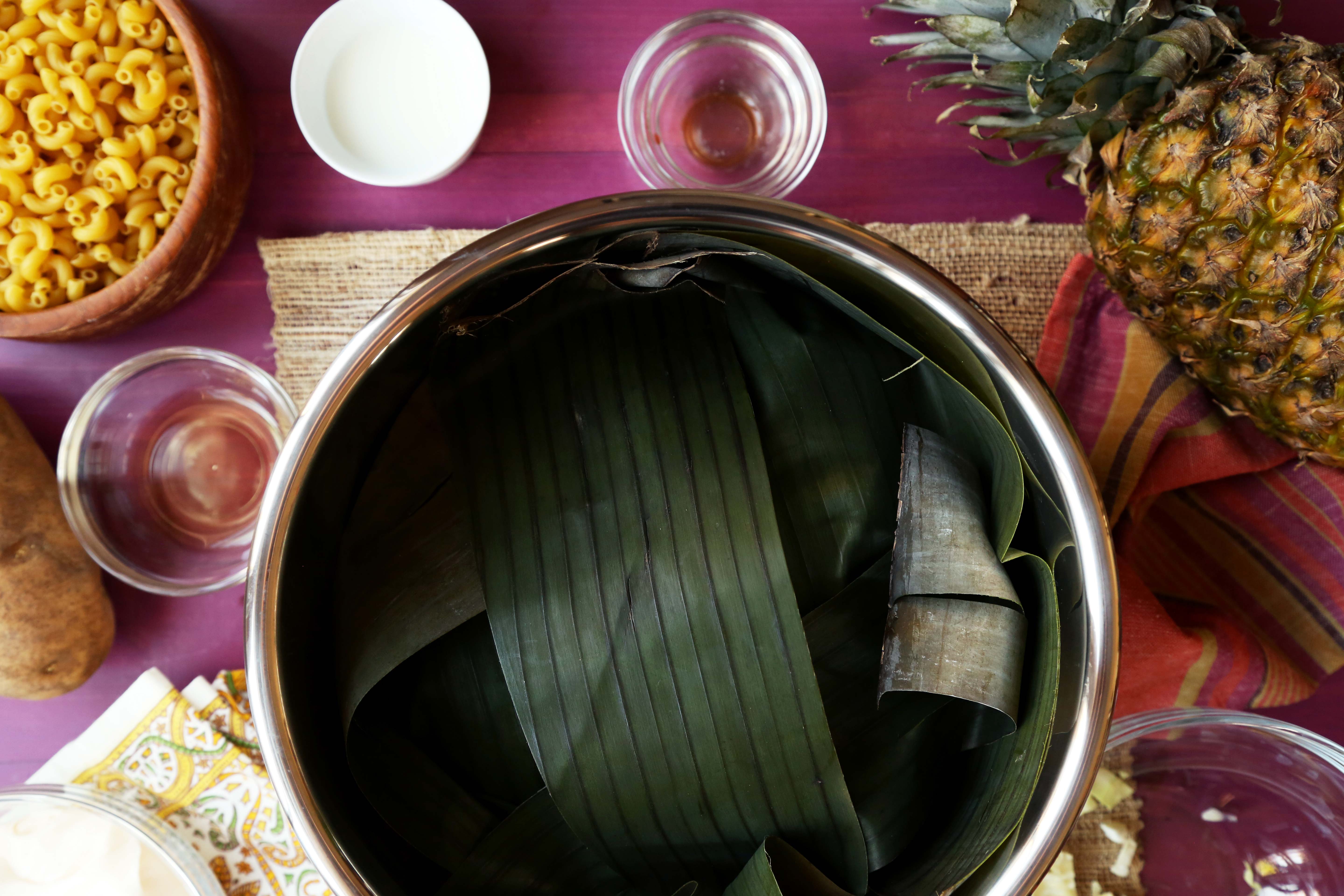 While the pork cooks, let’s turn to the Hawaiian macaroni salad. You can’t have kalua pork without macaroni salad. Cook the pasta according to package directions and then drain. Transfer to a bowl and immediately stir in the vinegar, carrots and onion. 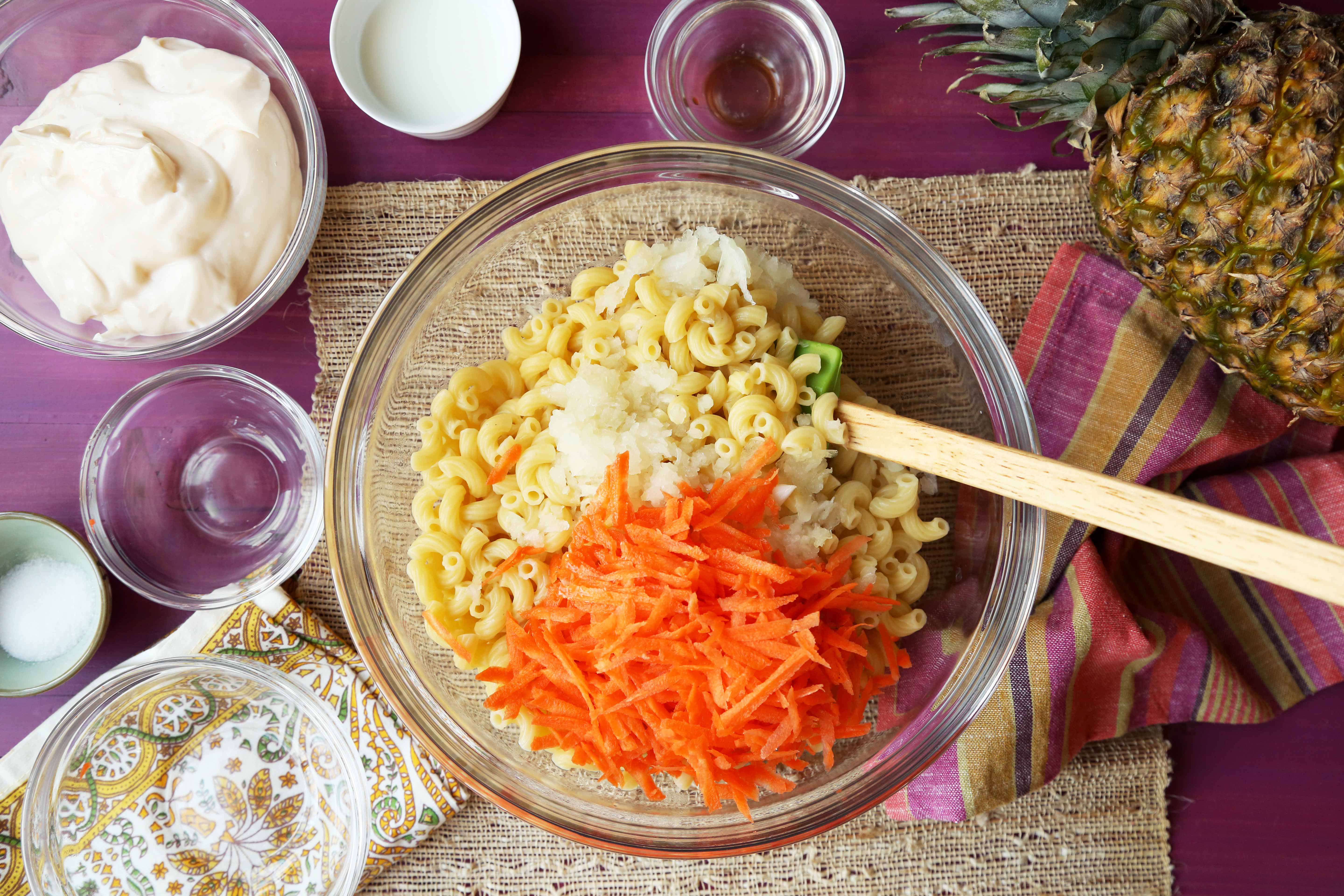 I like to add cooked potatoes to my macaroni salad, which isn’t at all traditional BUT I did have it like this once in Hawaii and so therefore I feel like it’s acceptable. Boil a peeled and sliced large potato until just fork tender. Drain and add to the macaroni. Allow it all to cool completely. 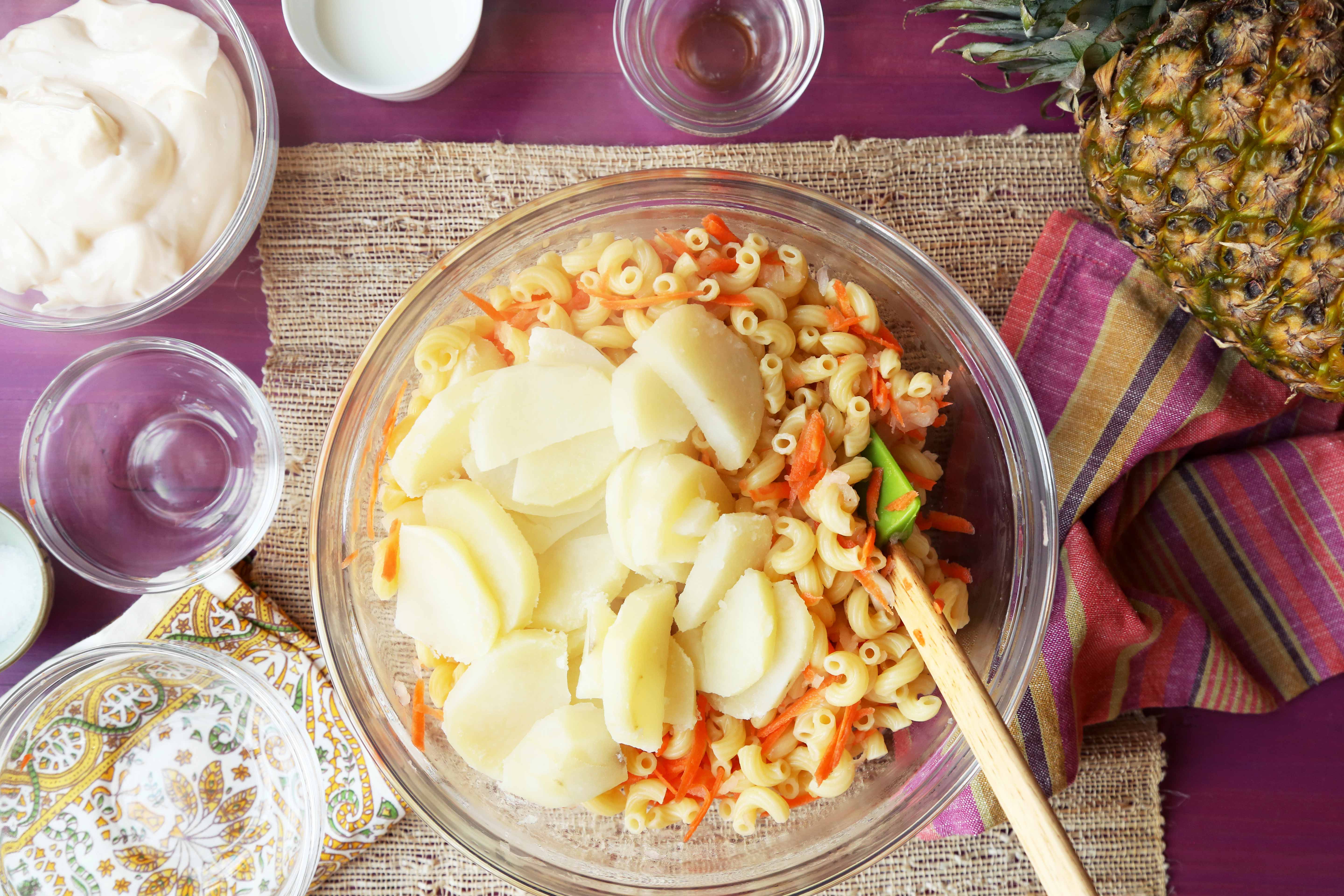 In a small bowl, whisk together good quality mayonnaise, milk, sugar, salt and pepper until smooth. 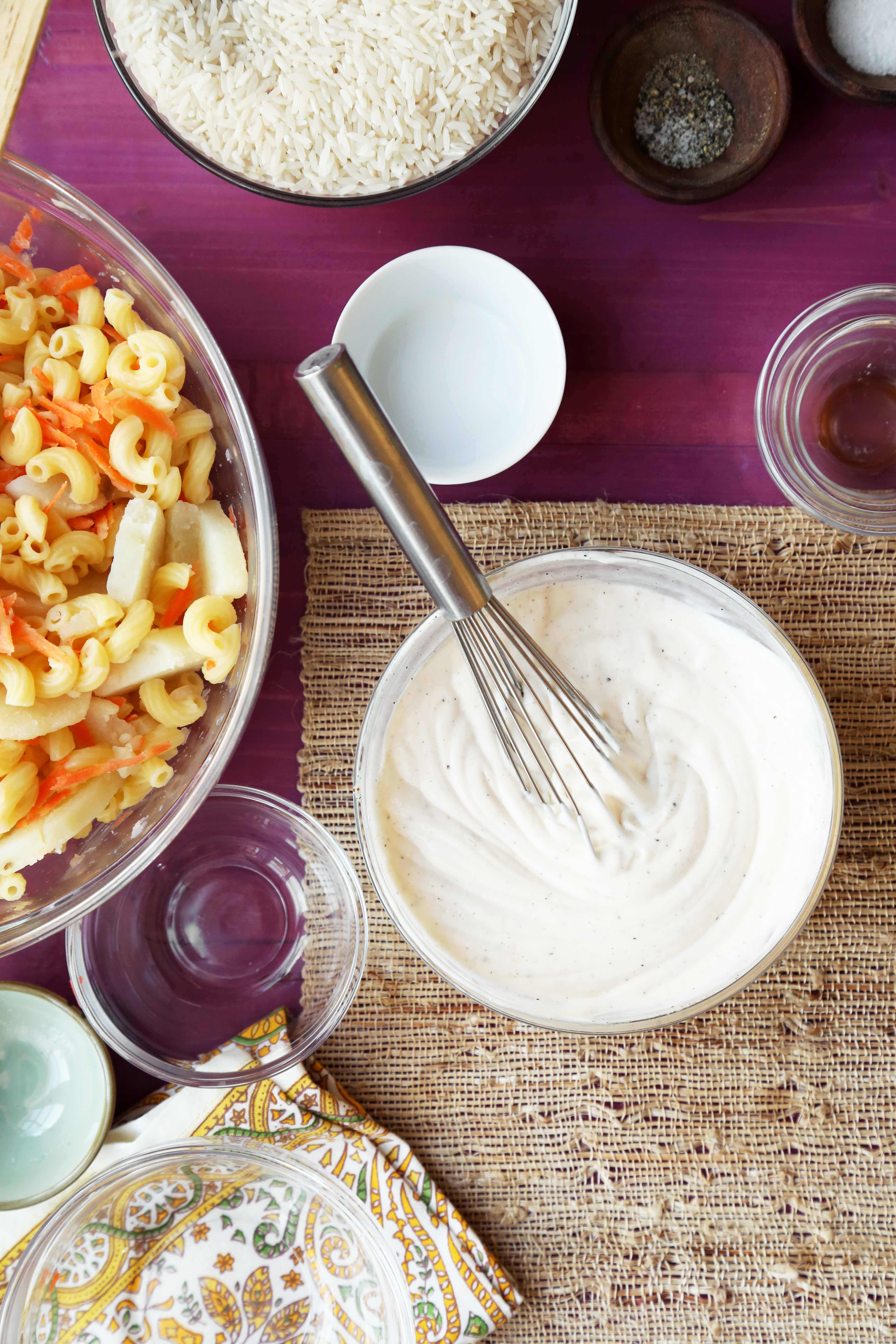 Once the salad has cooled, add the dressing and gently mix until evenly combined. Give it a taste and adjust seasoning, adding more salt or pepper as needed. Cover with plastic wrap and chill for at least 3 hours or overnight.

**Tip: Making the salad ahead of time, if very important because it allows the flavors to blend and develop more. If the salad dries out a bit, try stirring in a tablespoon of milk at a time until it loosens up.** 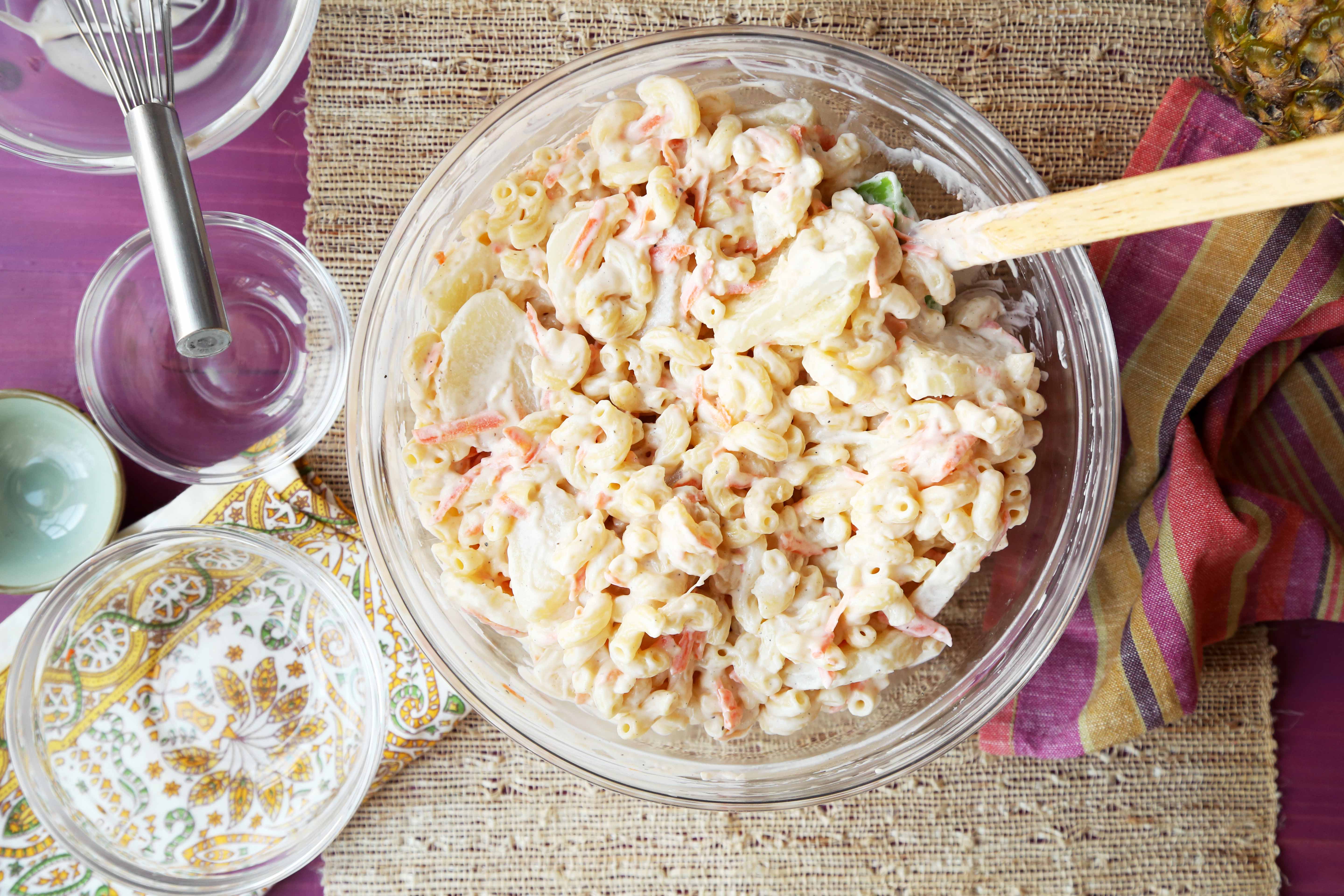 Once the pork is done, and the instant pot has unlocked, carefully open and discard the top banana leaves. Carefully transfer the pork and cabbage to a large bowl and shred with two forks. Pour about a cup or so of the cooking liquid from the instant pot over the pork. You want to add enough just to moisten it. 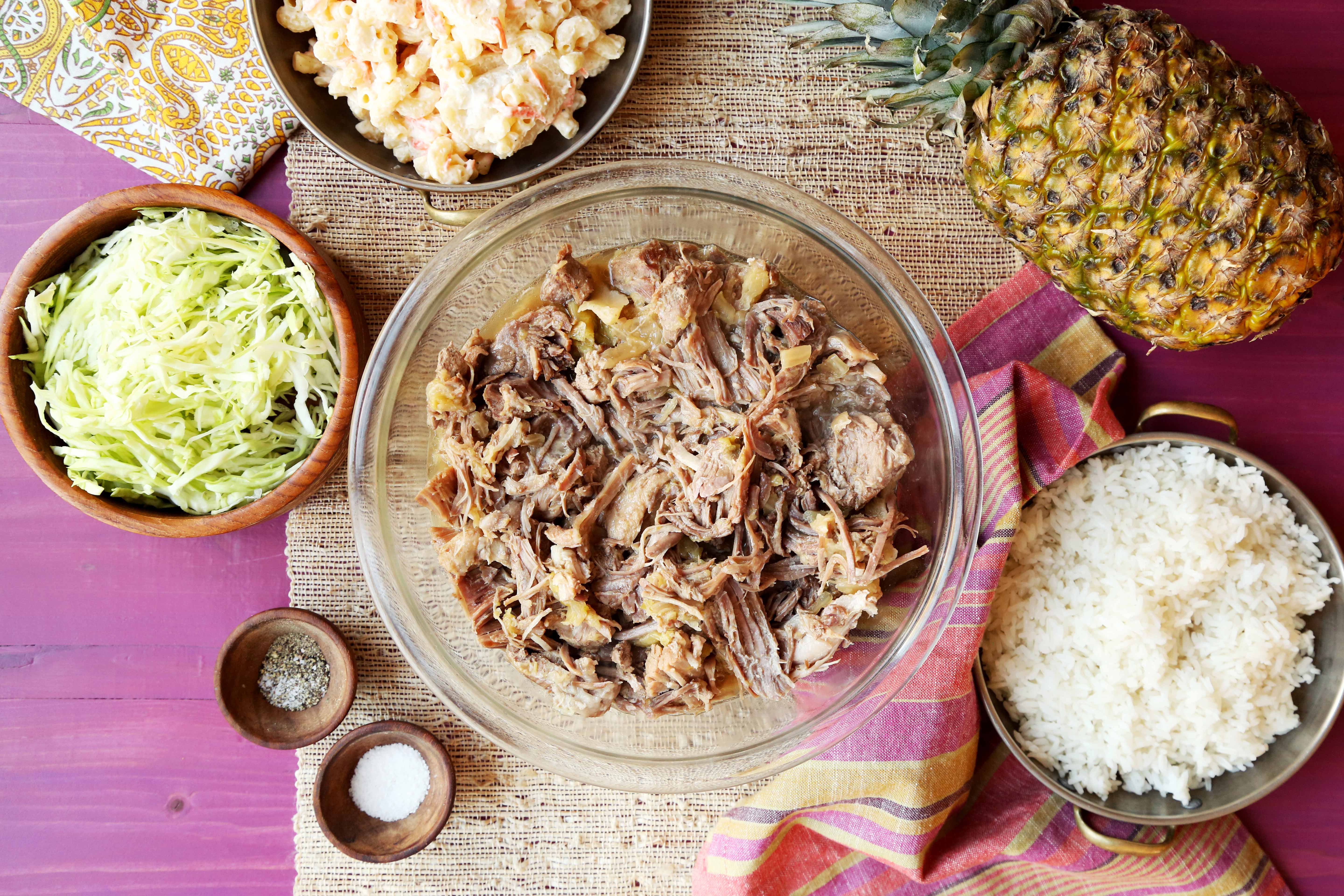 Serve the pork with the macaroni salad and cooked white rice on the side for that complete Hawaiian meal! You’ll feel like you’ve been transported to Hawaii without actually leaving your home. 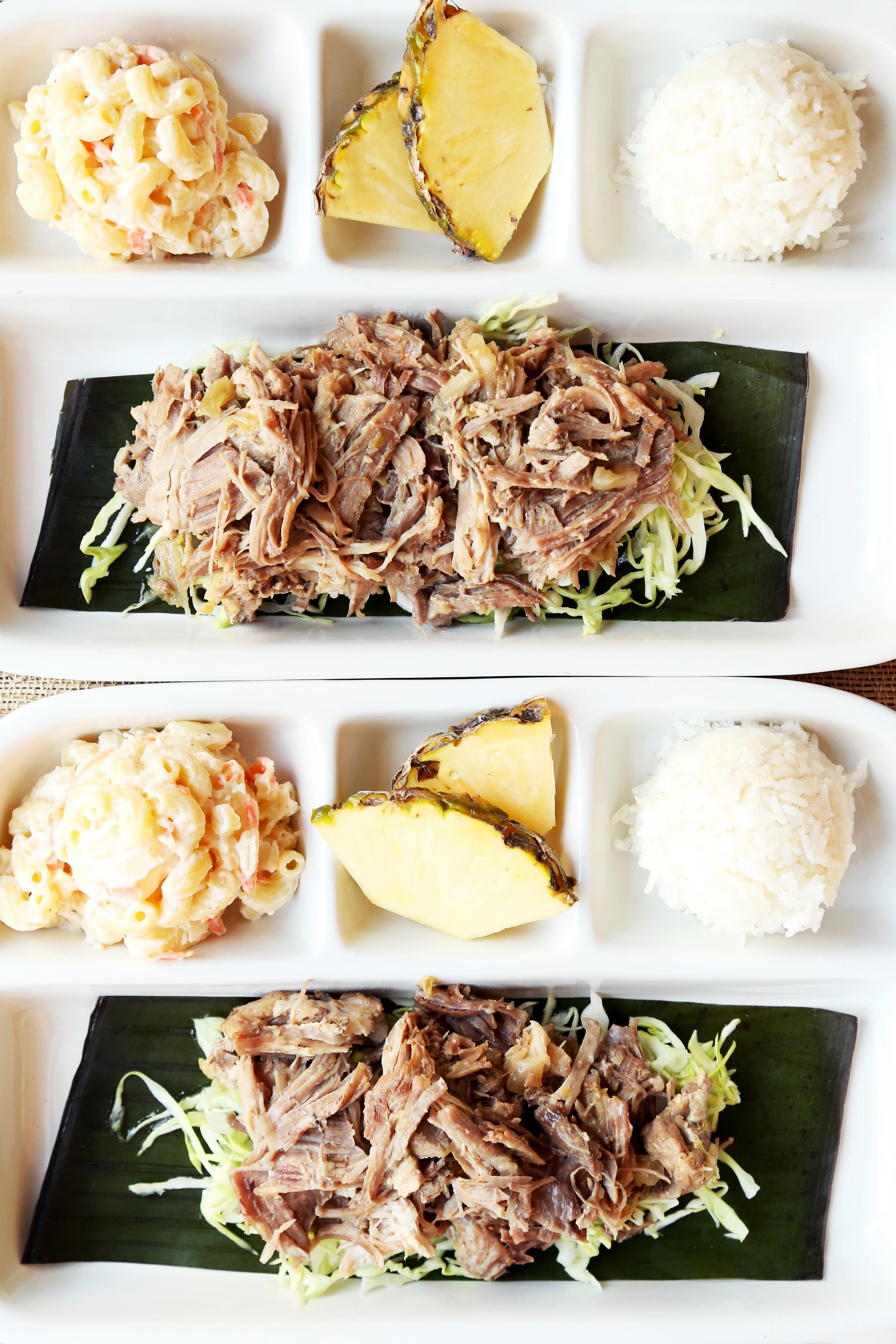 If you happen to have banana leaves left over, I like to serve the kalua pork on top of a piece of banana leaf with a bit of raw shredded cabbage. Not necessary but a nice touch if you ask me. 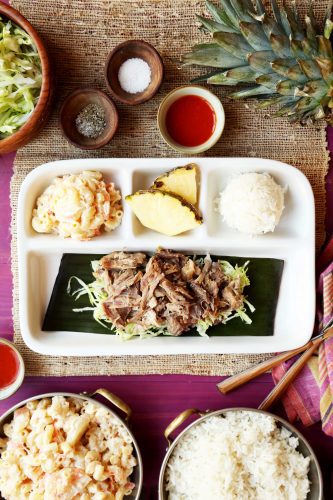 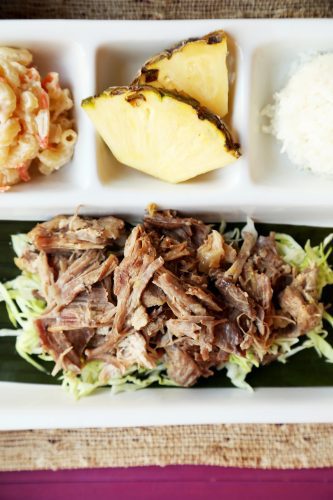 If you don’t have an instant pot, you can easily make this in a slow-cooker. Line your slow cooker with banana leaves and arrange the pork and cabbage as directed. Pour in water as stated and top with banana leaves. Cook on low for 16 to 20 hours or on high for 8 to 10! Either way, it’s a great meal to make, especially on the weekend! 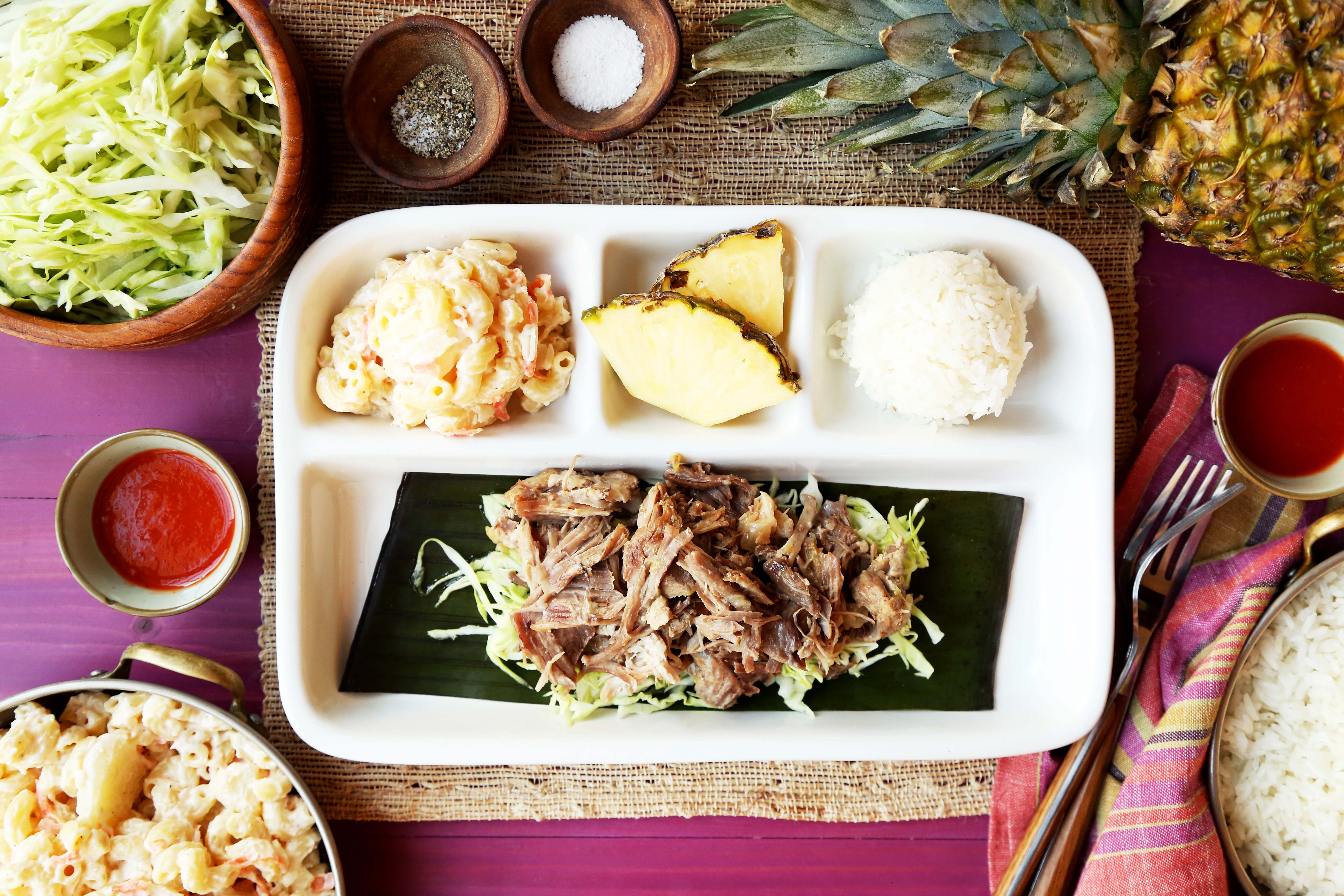 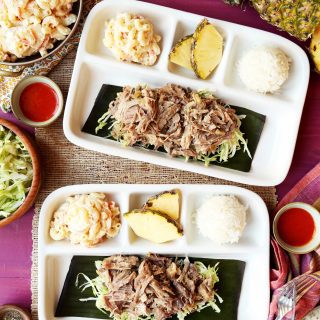