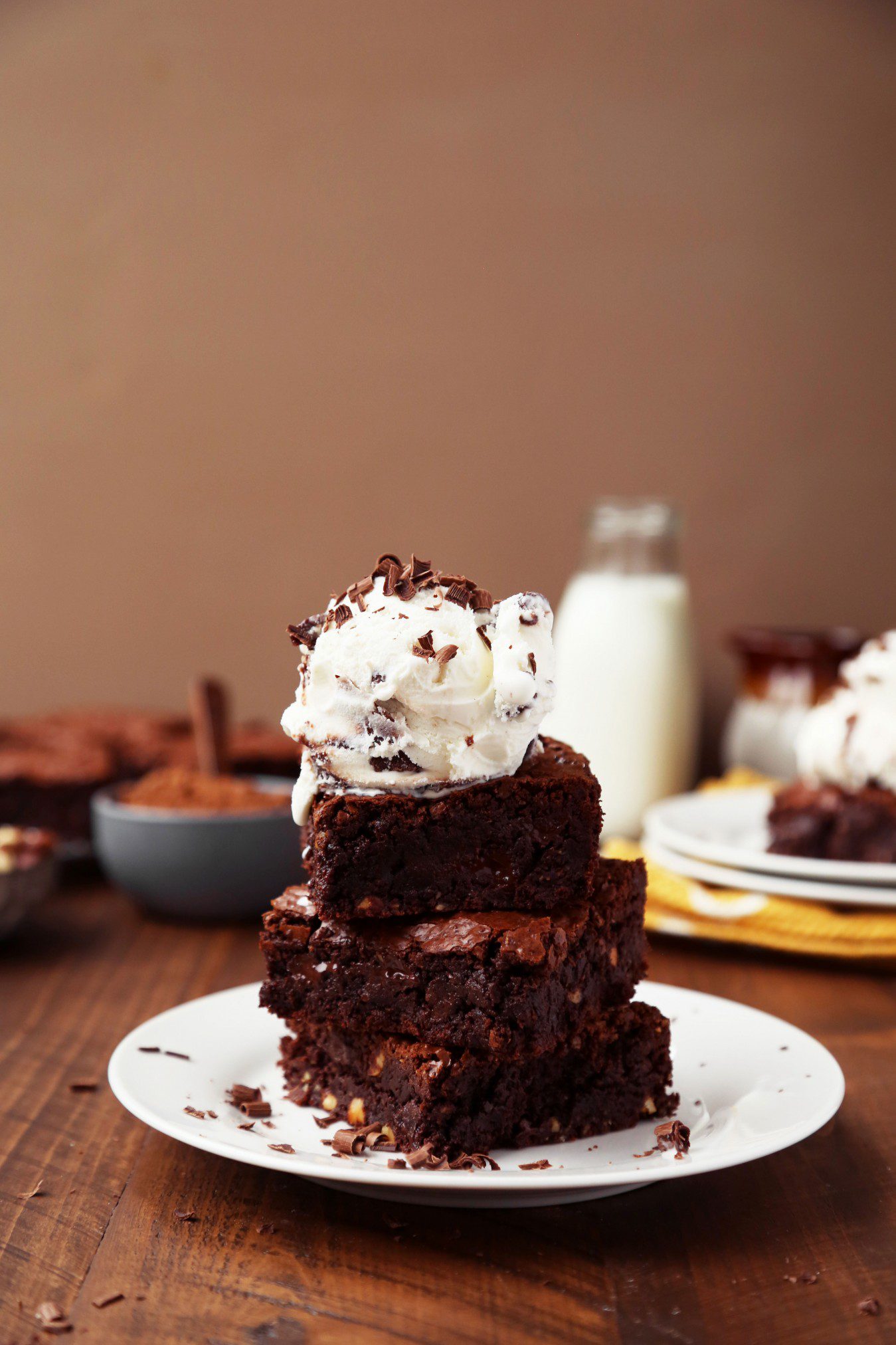 I’ve always had a big fear of making homemade brownies…from scratch. Mainly because every single time I’ve tried in the past, they inevitably end up super dry and tough and gross. They’re so tough that they can double as a weapon. I’m not even joking. It’s a sorry sight to see. I’ve since given up, however, and resorted to just baking brownies from a box, which surprisingly enough are actually really good brownies from a box. I came to the conclusion recently though, that I needed to overcome this fear. The result of which are these Gluten-Free Hazelnut brownies. Now, I’m not usually one for gluten-free anything, because I happen to really love gluten, but here’s the deal. Gluten or overworking gluten, to be precise, is what causes baked goods to become dry and tough rather quickly. I realized that in order to get perfectly fudgey brownies I needed to lose the gluten, aka the flour. In losing the flour, it ensured that I wouldn’t overwork the batter. That solved the issue I had always encountered in my brownie baking adventures. I could literally stir for hours and the batter would still turn out great. And to make matters even better, for those of you who are like me, and aren’t gluten-free aficionados, you’ll never be able to guess that there isn’t any flour in these here brownies. It’s a win-win.

The great thing about this recipe is that not only do the ground up hazelnuts work as a flour to the batter, it also gives it so much flavor. And as we all know, through our obsession with Nutella, chocolate and hazelnut go so well together. Like two peas in a pod, or peanut butter and jelly, or salt and pepper. The browned butter, instant espresso and tiny bit of cinnamon also give the brownies an intense level of flavor that can’t be beat. Intense in a good way. After all, the biggest goal in any brownie making situation is to maximize the taste and minimize the hassle so that it increases the number of brownies you’ll eat. It’s also the perfect Friday recipe to embark on while you get ready for the weekend. Brownies are a total weekend food. Brownie breakfast sundae anyone? I’m not saying yes and I’m not saying no. Let’s make this happen. 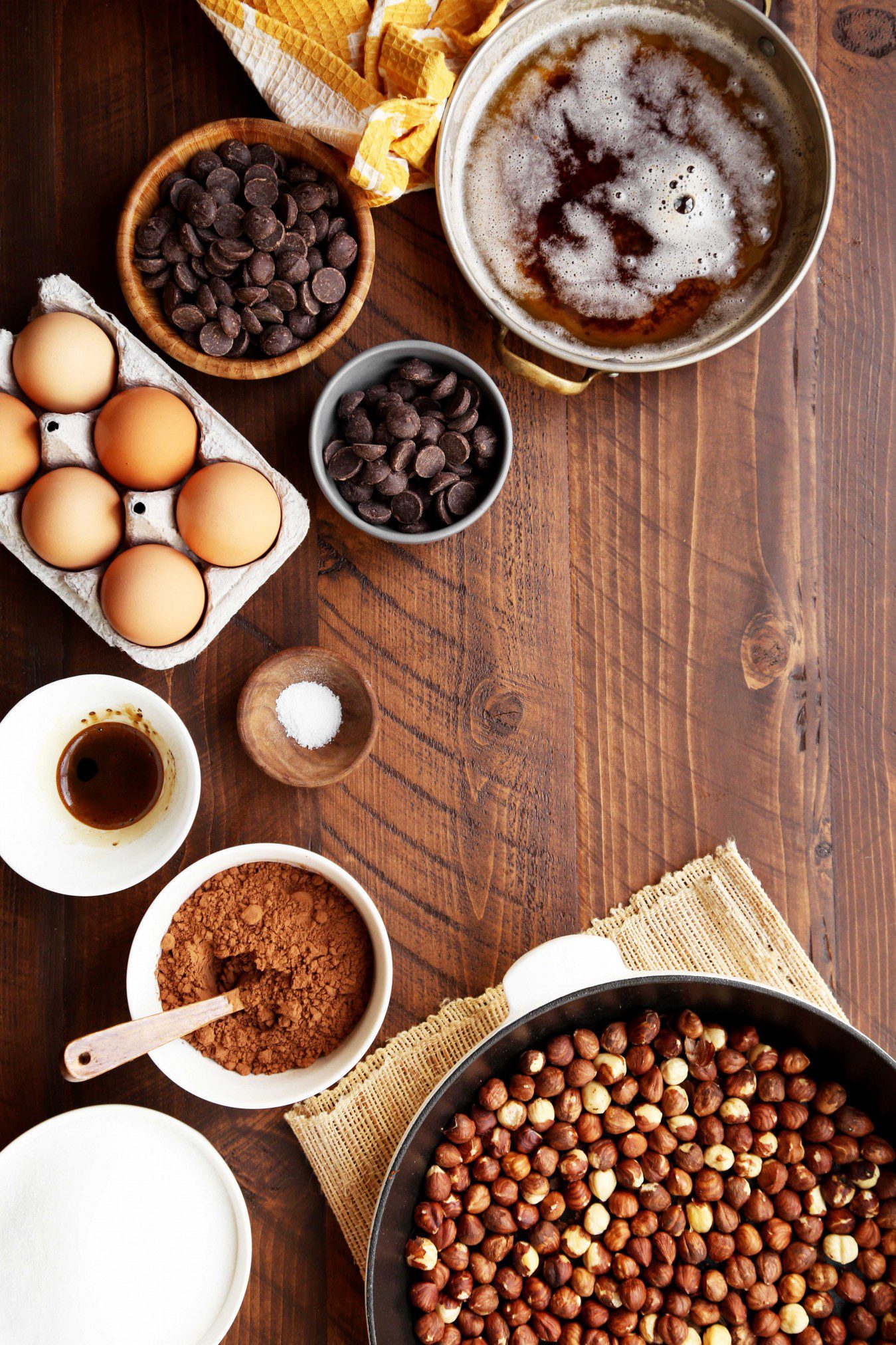 The first thing we have to do is make our own hazelnut/cocoa flour. Since these are gluten-free brownies, they don’t have flour in them and because of that they need some sort of “flour.” That’s where the ground hazelnuts and cocoa powder come in. In a food processor, pulse together the nuts, cocoa, 1/2 cup sugar, salt and cinnamon until finely ground.

**Note: The mixture should resemble the look and texture of ground up coffee.** 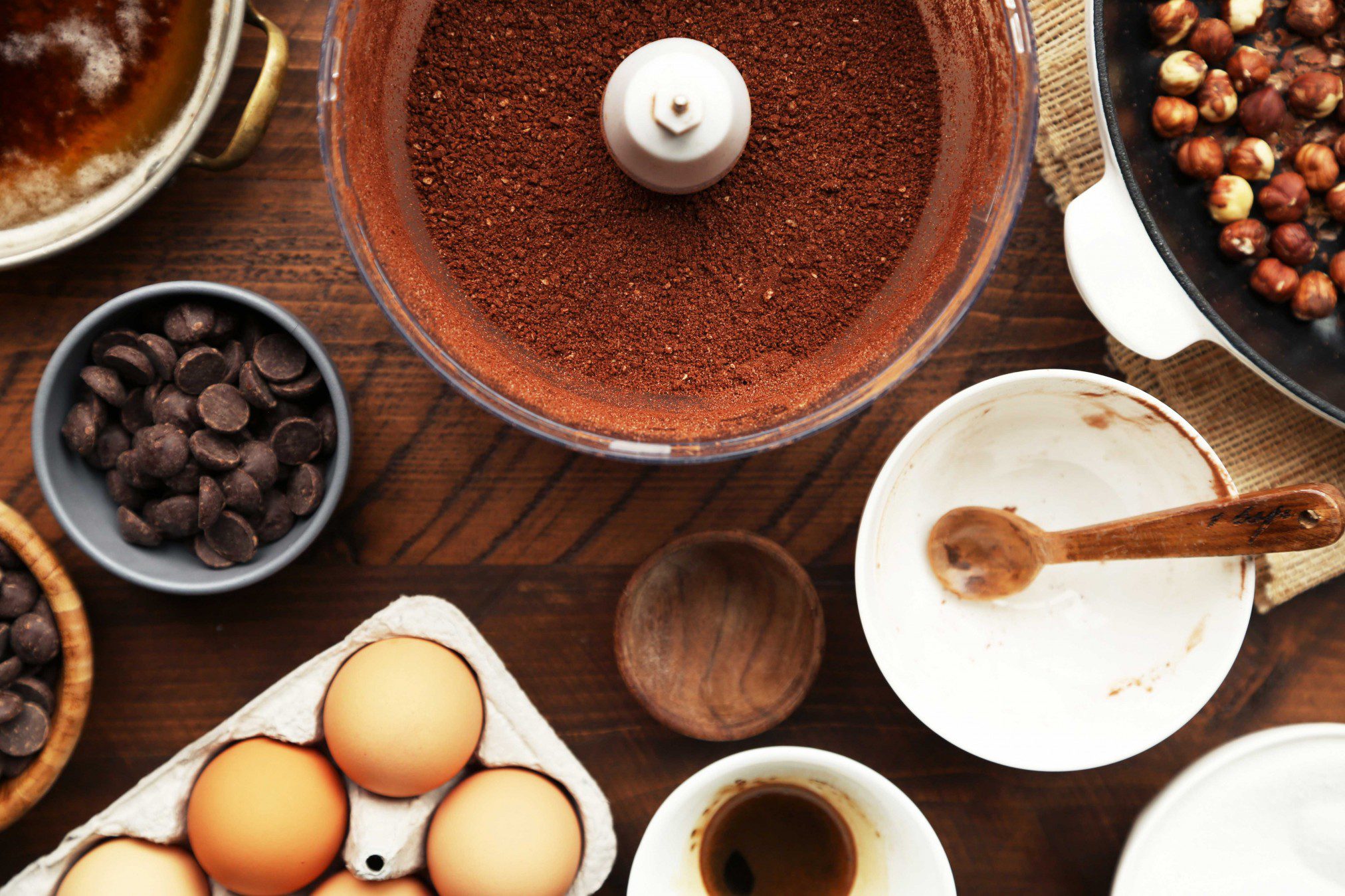 Brown the butter in a saucepan over moderate heat and then pour into a small bowl with the chopped bittersweet chocolate.

**Note: You can also just use bittersweet chocolate chips if you don’t want to chop up solid pieces of chocolate or if you just have chips on hand.** 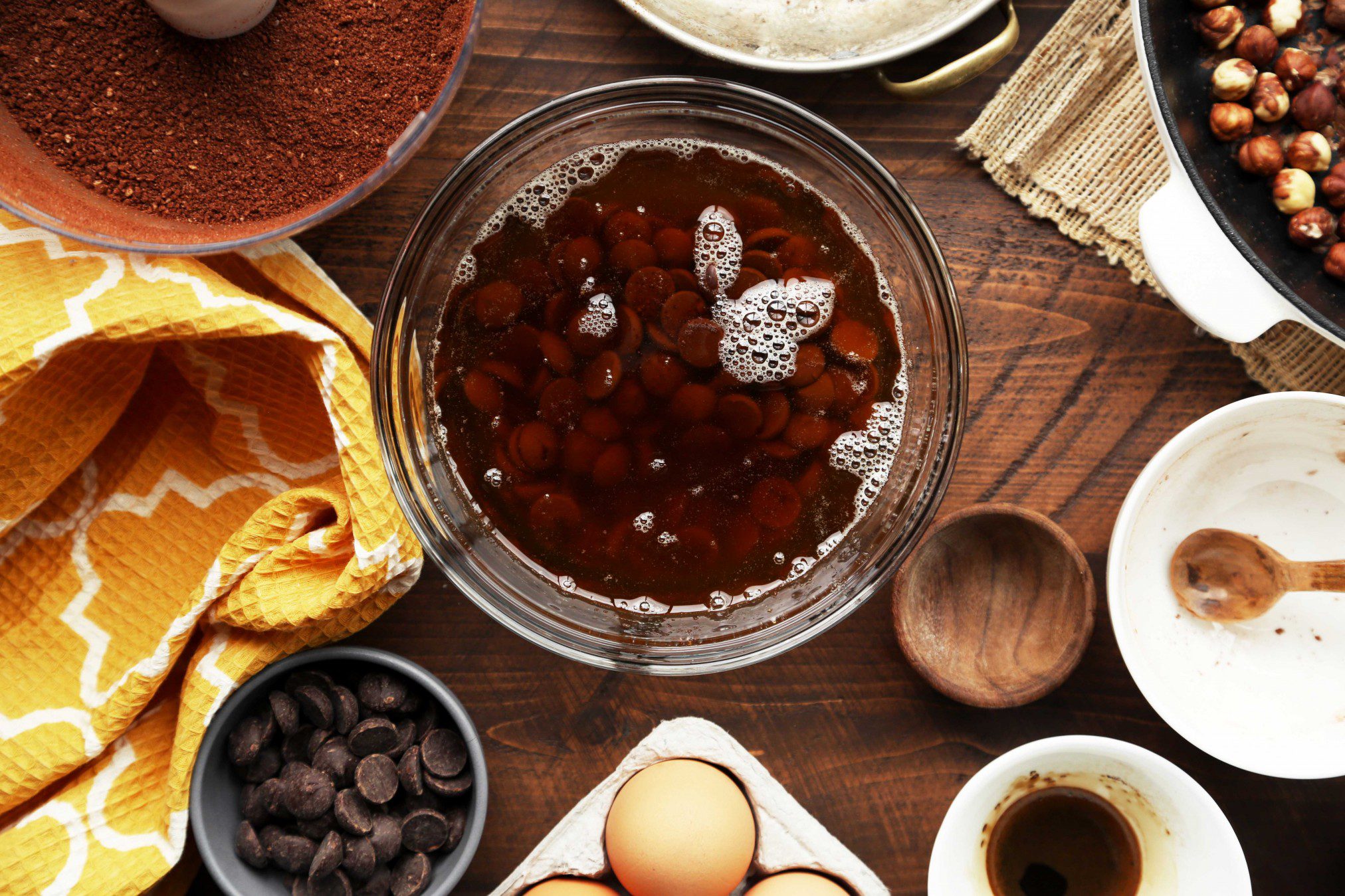 Let sit for about 5 minutes, untouched, and then stir together until fully melted, glossy and smooth. Set aside to let cool slightly before proceeding to making the batter. 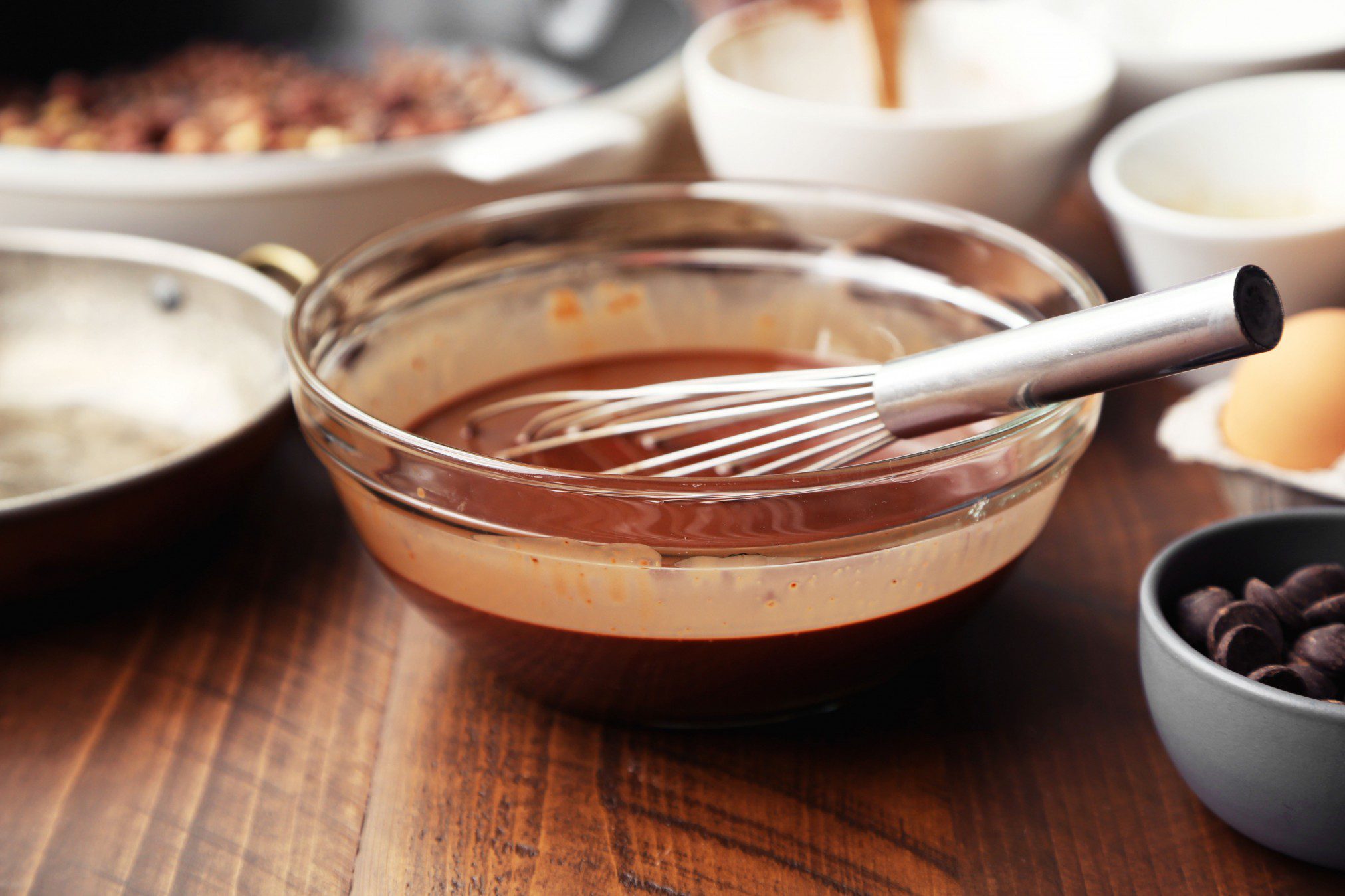 In a large mixing bowl, beat together the eggs, remaining sugar and instant espresso/water mixture on high until fluffy and tripled in volume. It should be somewhat thick and pale in color. 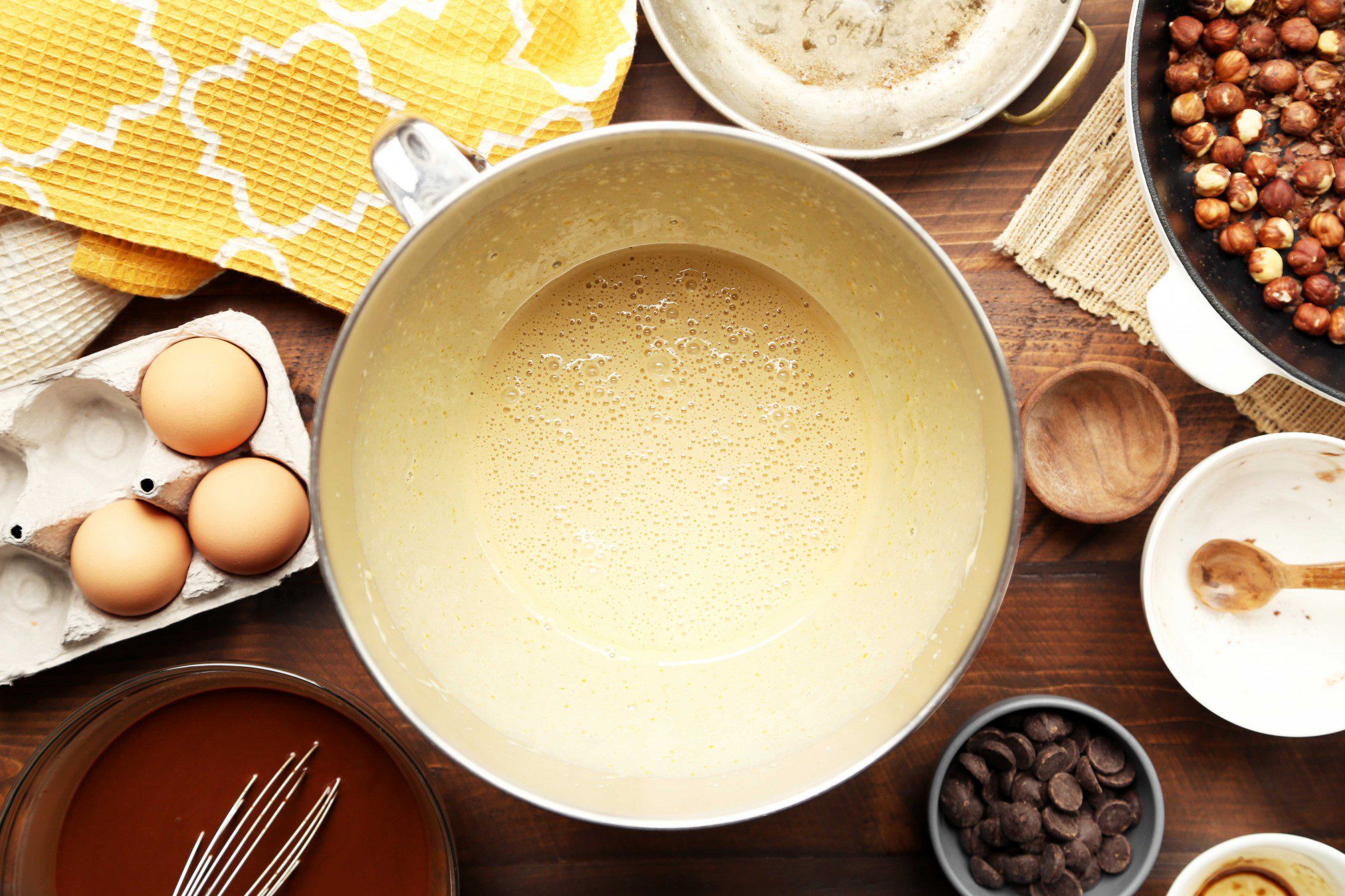 Stir in the ground hazelnut and cocoa mixture until well combined. The great thing about these brownies not having flour in them, is that there’s no chance of them over-mixing and getting dry because gluten (which is what flour is) tends to get tough when overworked and since this is sans flour, go ahead and mix. Mix till your heart’s content. 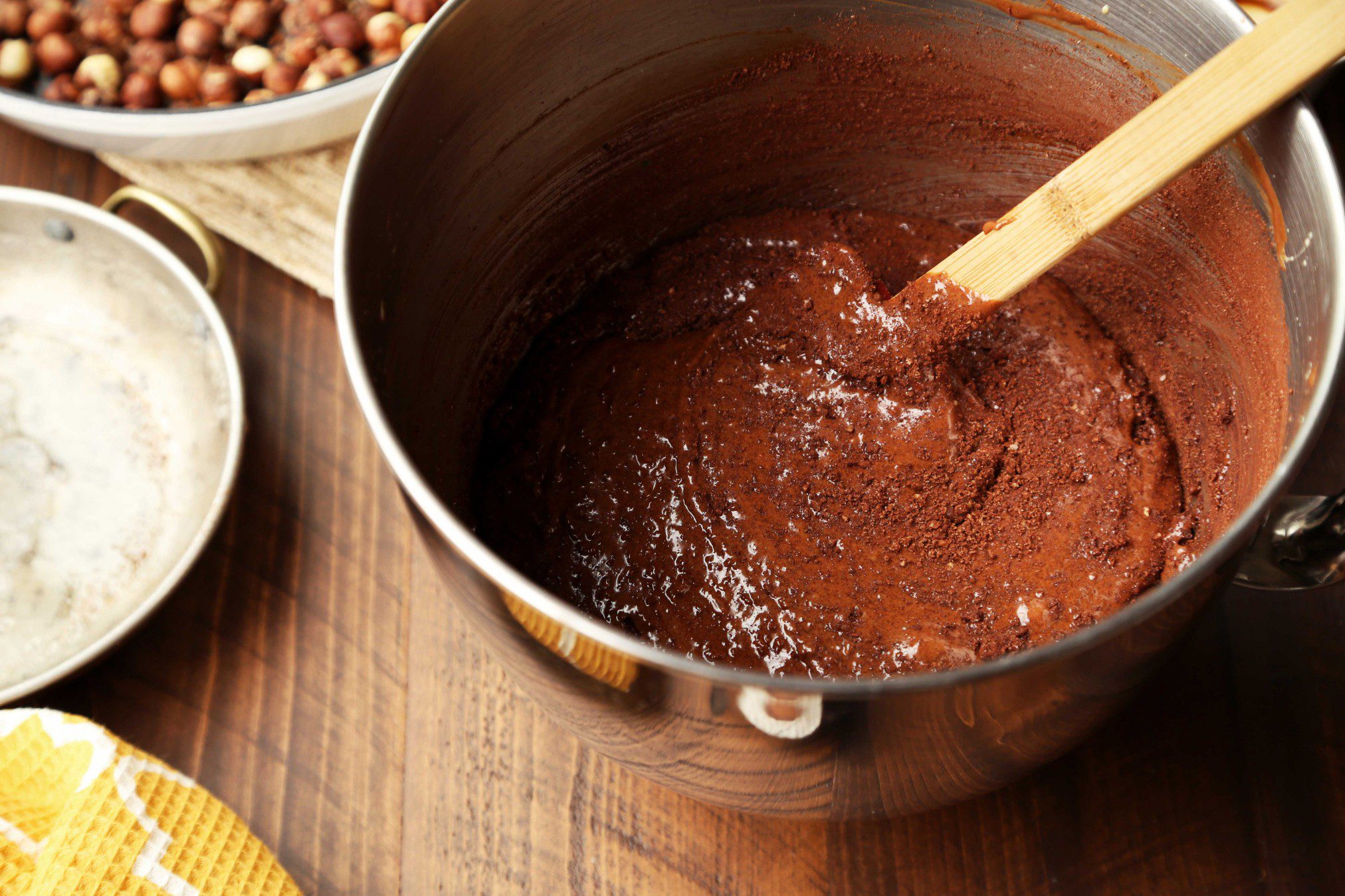 Once the batter is done, fold in the chopped hazelnuts and bittersweet chocolate chips. This will give these brownies that extra homemade decadent touch. It’ll give them texture and more gooeyness from the chocolate chips.

**Note: These last two ingredients are optional of course, so feel free to leave them out if you just want plain brownies.** 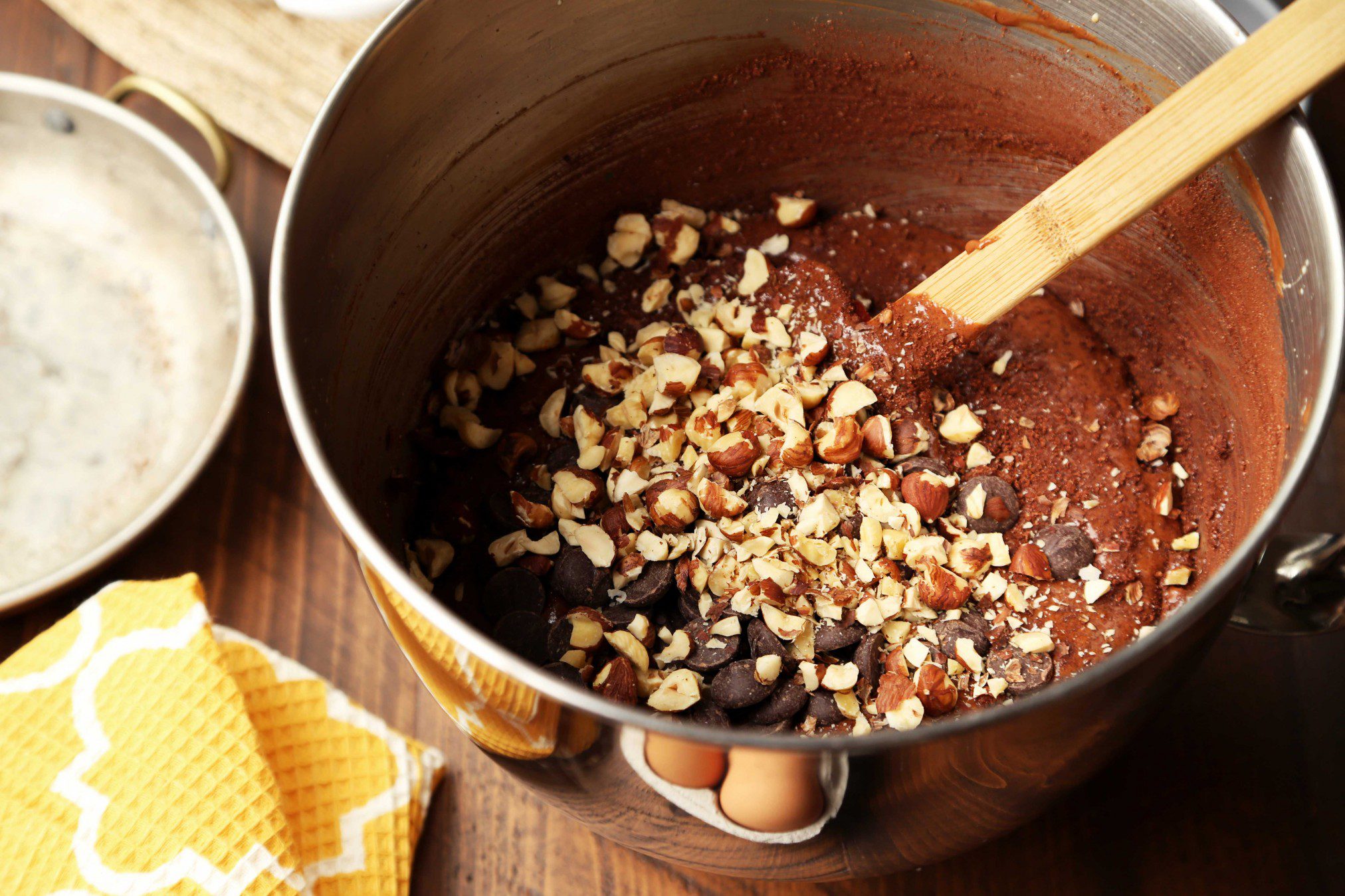 Pour the batter into a parchment lined 9-inch square baking dish. I like to grease the paper with cooking spray just as an added precaution to ensure that my brownies don’t stick. I told you, I’m paranoid. 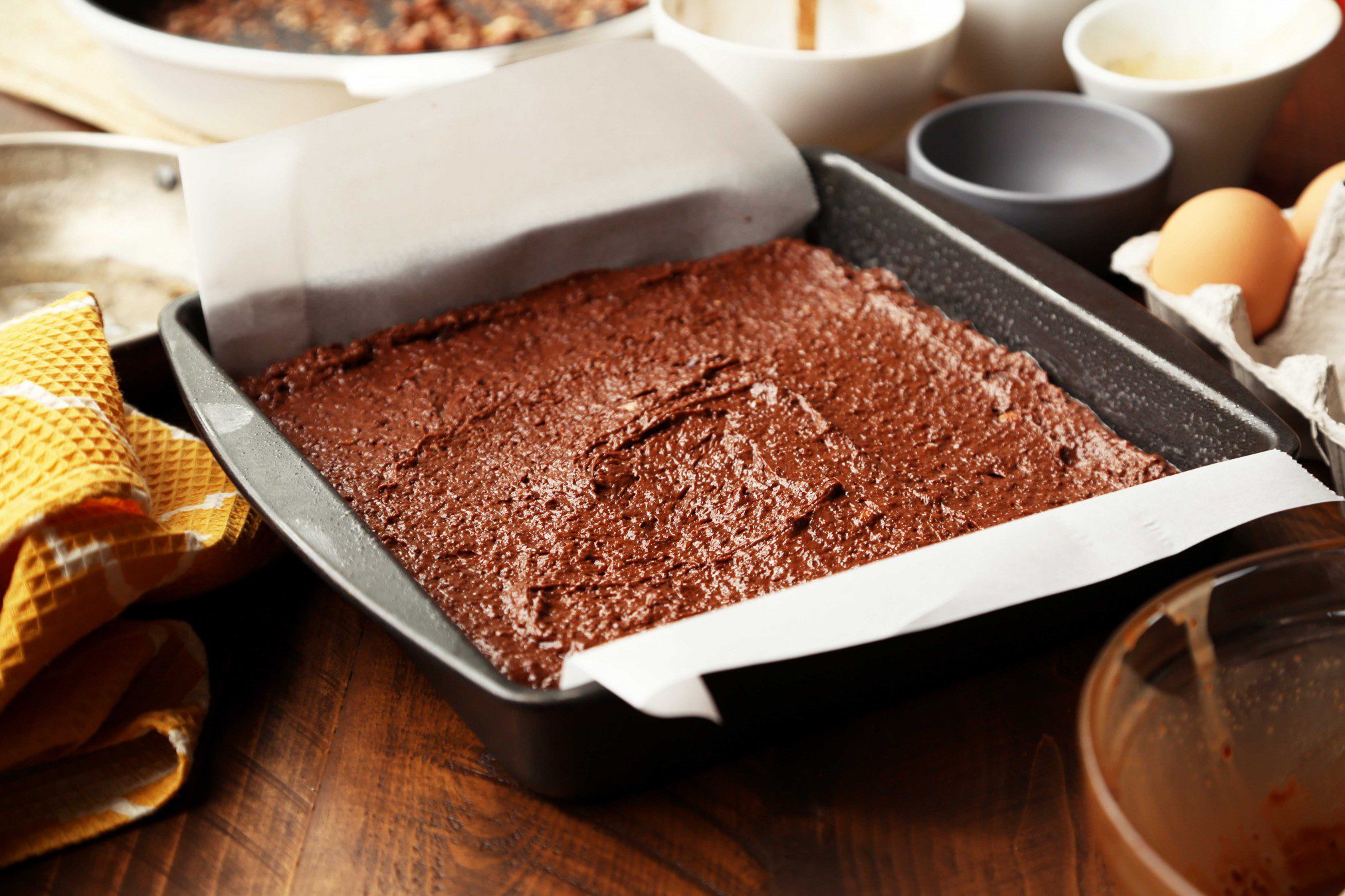 Cook until the top is glossy and the center is set and when a toothpick inserted in the middle, comes out clean. You’ll want to under bake them slightly that way they’re gooey and not dry. No want wants a dry brownie, but even if you do slightly over bake them, don’t worry. That’s why ice cream was invented. 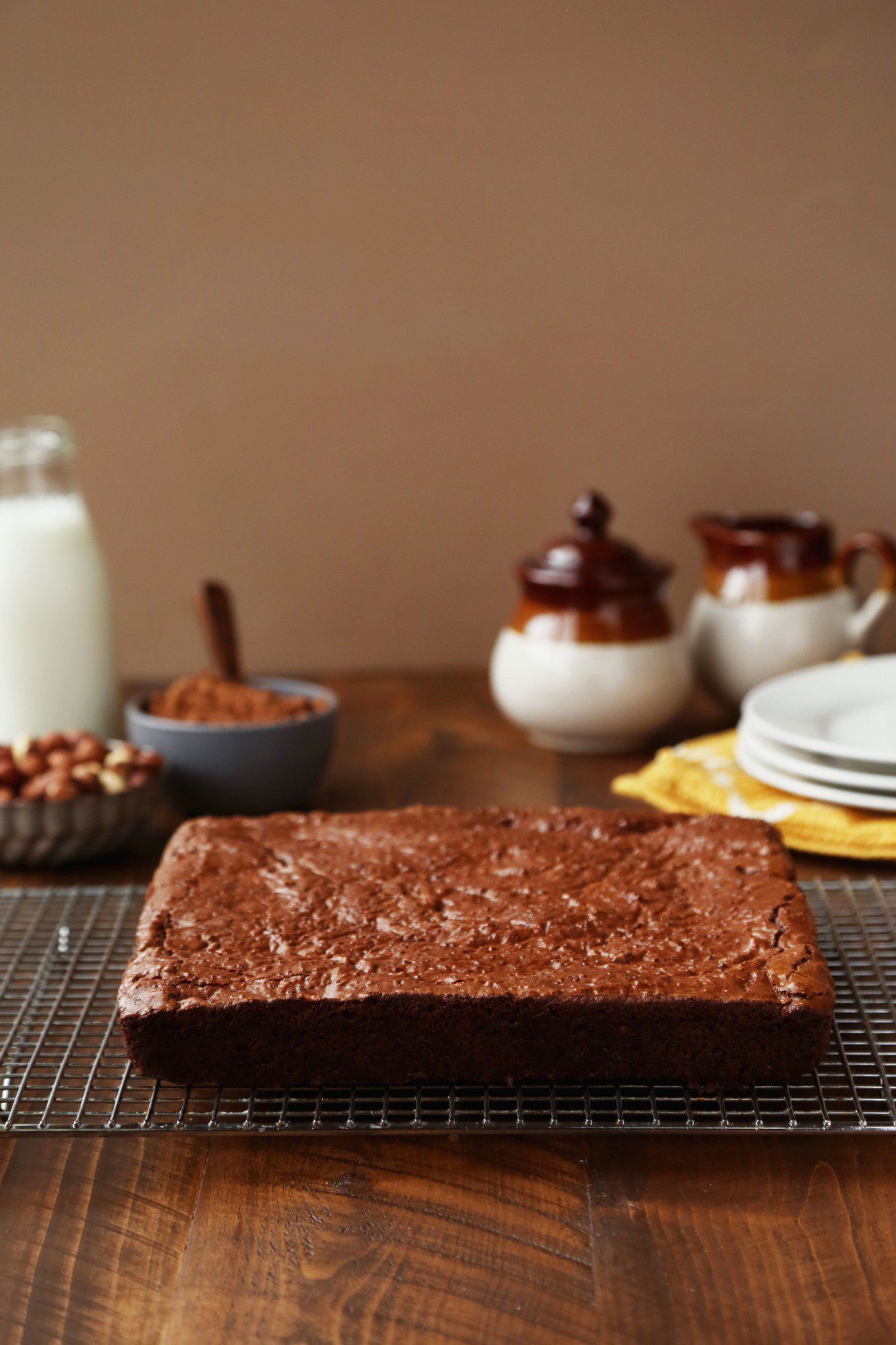 Let the brownies cool completely on a wire rack and then transfer them to the fridge to chill. This will make cutting the brownies a lot easier. Cut into 9 squares (or smaller squares) and serve. If you have any leftovers, wrap each brownie individually with plastic wrap and store at room temperature for up to 2 days, or freeze for up to 1 week. 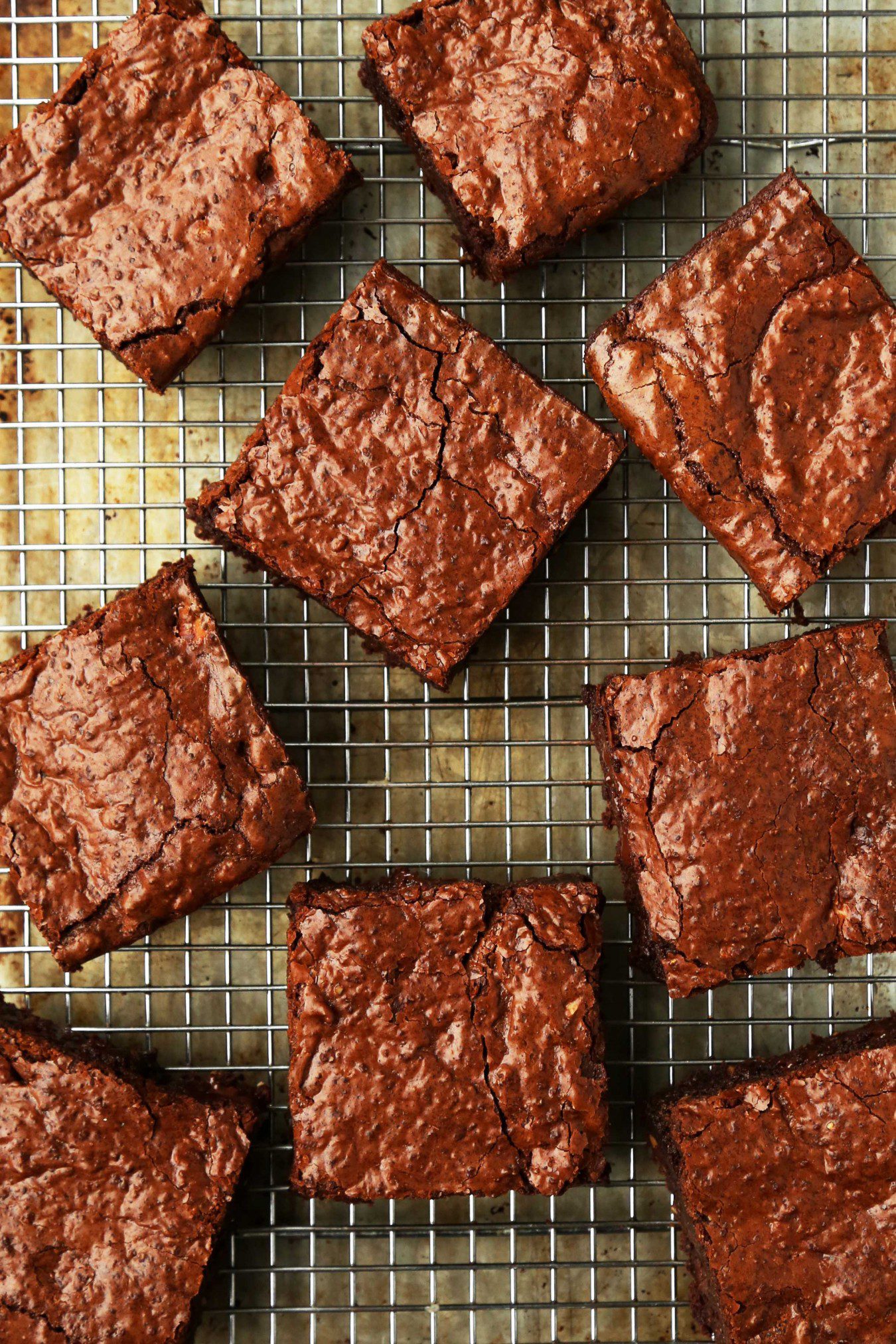 If you want to really take these brownies up another notch, and I know you do, then by all means serve it with a big scoop of ice cream. Go classic with vanilla or switch it up with chocolate, caramel, coffee or hazelnut ice cream. Any one of these flavors would be great. 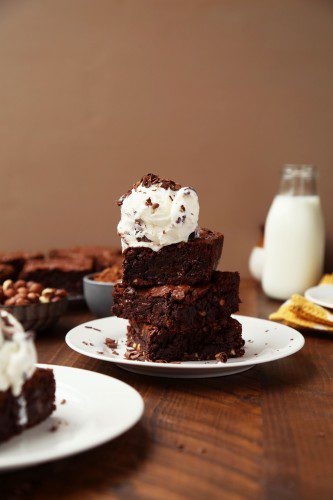 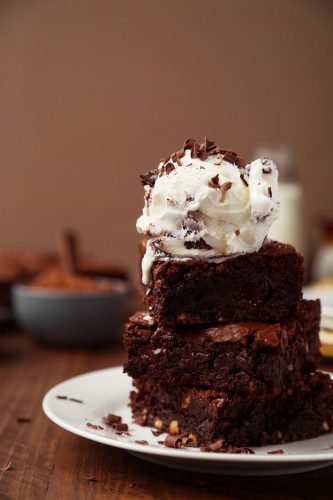 I shaved a bit of chocolate on top of the ice cream because I like to pretend I’m fancy every now and then. You could also drizzle chocolate syrup or caramel on top if things aren’t sweet enough for you. Go ahead, I think that’s a great idea. 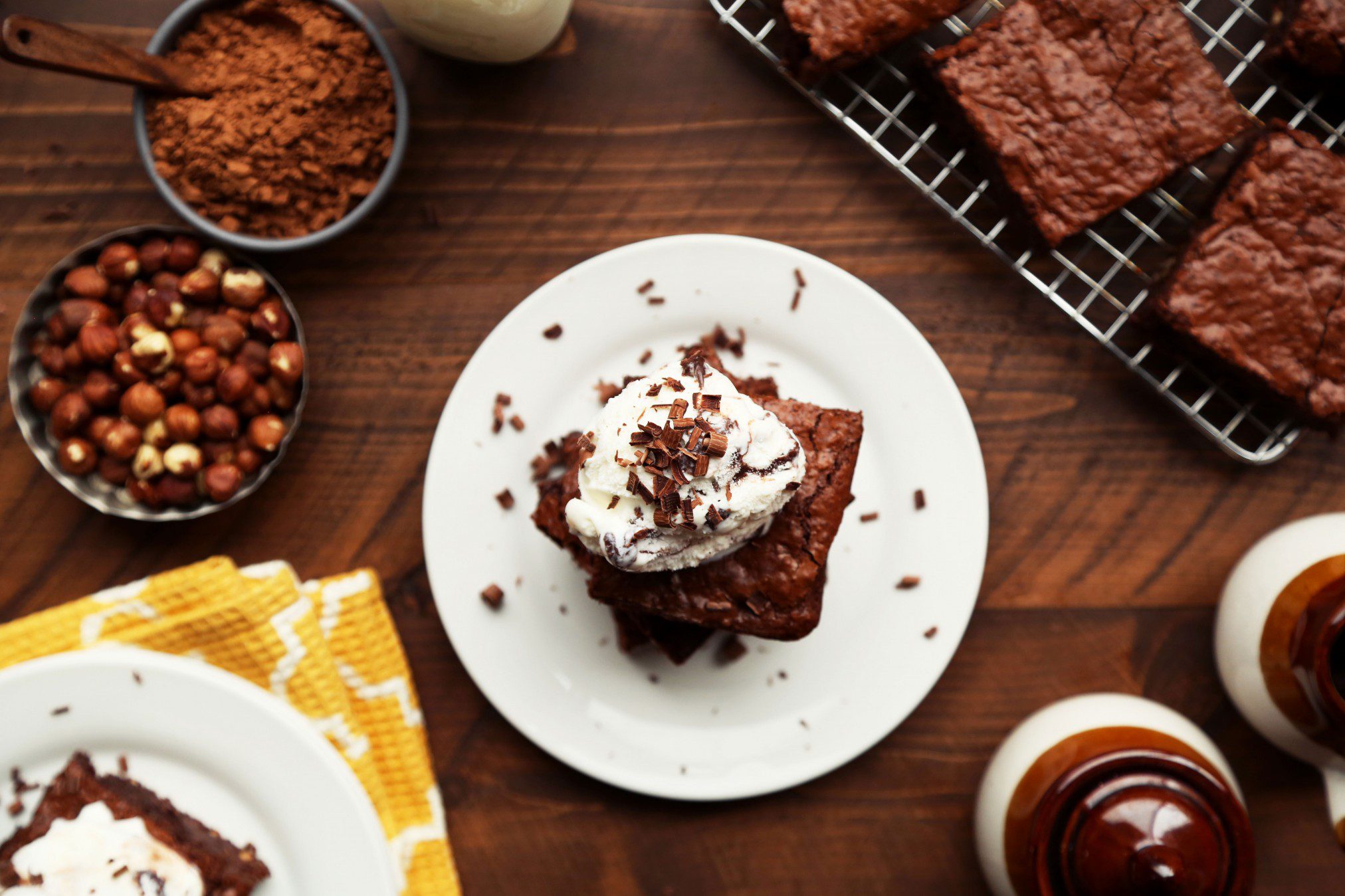 If you don’t have hazelnuts on hand or can’t find any at the grocery store (which sometimes can be hard to come across), then feel free to use almonds instead! Almonds and chocolate are best friends so embrace it. 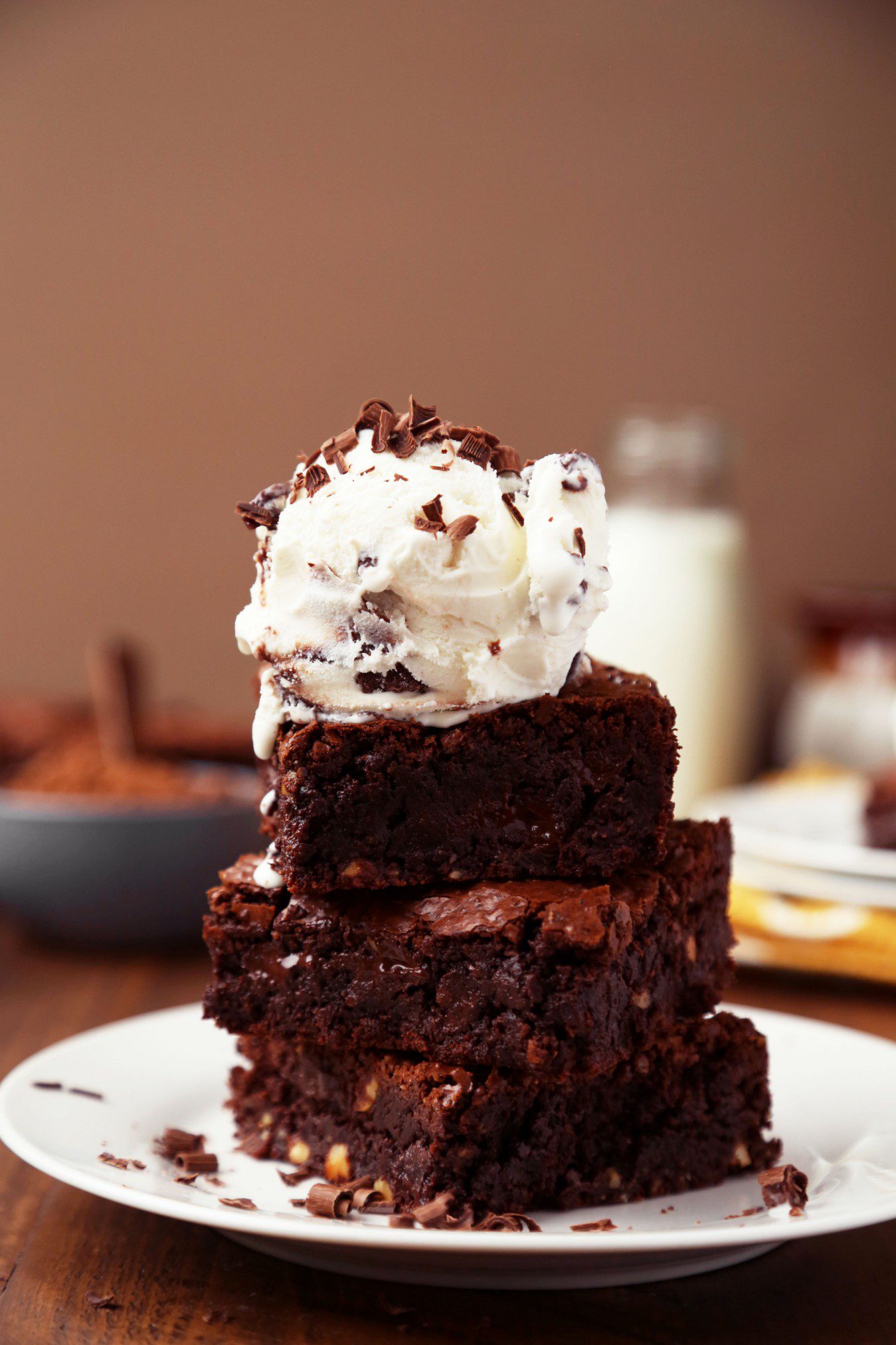 Fridays are for indulging and letting everything go, so let’s do just that with these Gluten-Free Hazelnut Brownies. I think it’s necessary to include the ice cream and extra chocolate on top because without either of those ingredients, the brownies wouldn’t be complete. That wouldn’t be good. 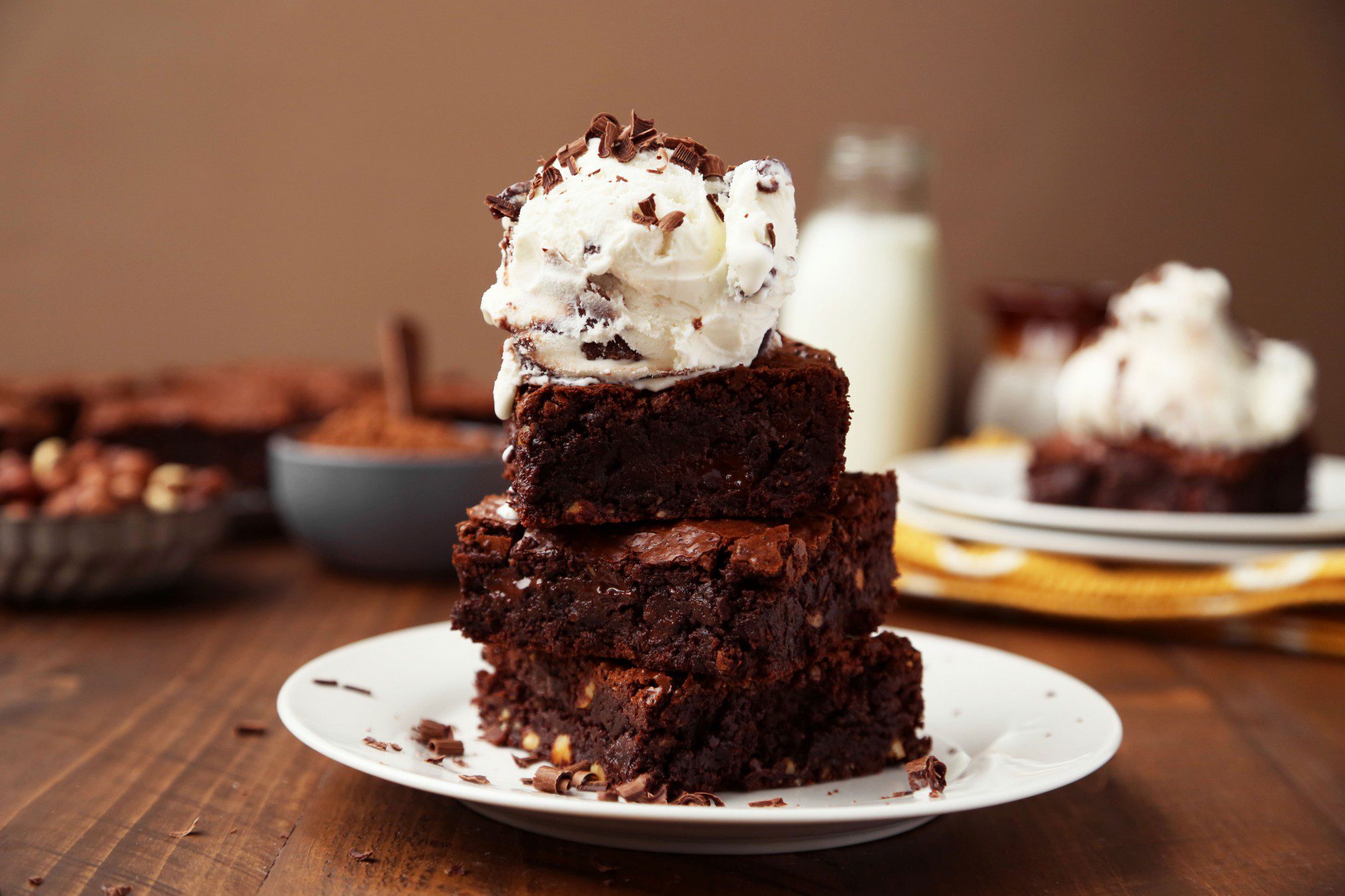