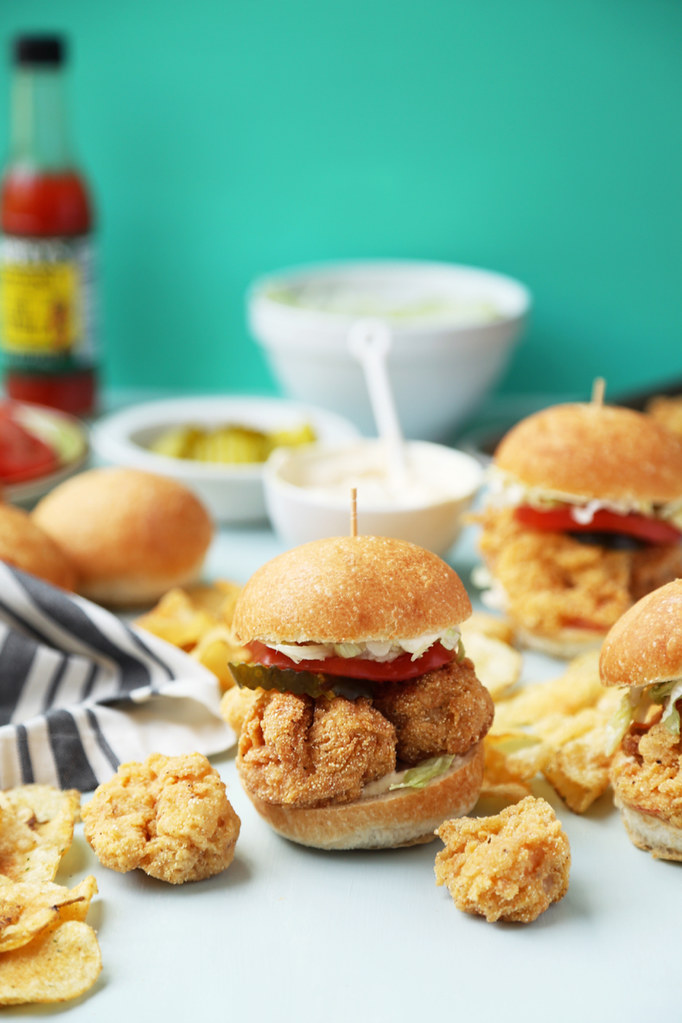 I’m currently spending a few weeks in New Orleans, so in honor of such an occasion, I thought I’d share one of my favorites from the city. Fried Shrimp Po’boys…in slider form. Because we all know that sliders are always 100 times better than their original counterparts. That’s my story and I’m sticking to it. In a city that is so rich with delicious cuisine, though, it seemed only right that I should mark the occasion with food. I find myself making food be the solution to everything. I think this is the only way to go. I’ve eaten at a few po’boy places in Nola while I’ve been down there, and although I’ve had some great sandwiches in each, the best to me is still Johnny’s in the French Quarter (I’m sure some people will yell at me and tell me I’m wrong). I’m no New Orleans expert and perhaps it’s a tourist trap, but to me (and my taste buds), it’s one of the best. I also think it’s partly because I first tried it with Julian. He got a catfish po’boy and I ordered the crawfish. We took it to go and then walked to the WWII museum eating our sandwiches along the way, and wishing we had ordered another one to share. Now we can eat as many po’boy sliders as we’d like and not feel guilty about it, because ten of these sliders count as one normal sized sandwich. It’s true.

I’m no stranger to sliders. Someone even referred to me as “The Slider King” of the world (that someone might’ve been me, but that’s okay). Sliders and I go way back. It’s a love affair that I don’t think will ever go away. And I don’t want it to. Some of my favorites from the site are Pot Roast Sliders, Fried Green Tomato and Shrimp Sliders, and Loaded Baked Potato Sliders, just to name a few. Here’s a hint, if you search for “Sliders” on the site you’ll be able to find many more. That’s free of charge for you because I like you guys so much. Maybe not as much as sliders, but still, you’re up there on my list.

If you’ve never visited New Orleans before and have always wanted to go, I highly recommend it. I can’t give you guys a trip (I’m not Santa Claus, or Oprah) but I will do the next best thing. I’ll give you the recipe for these po’boy sliders! Whaaat?! Say it ain’t so!! My generosity knows no bounds. Now you can feel like you’re right here with me. That’s pretty awesome. If you really think about it, I’m doing you a favor. You don’t have to pack and travel to the airport and get through security and fly on a plane and then have the best time ever, but all the while knowing you have to go back home inevitably and so you get depressed about it. You don’t have to go through all of that. I’m saving you from it. Instead, you can make a batch of these sliders and bring New Orleans to you. TO YOU! Isn’t that so much better?! I think it is. Now if you’ll excuse me, I’m going to go eat some more food while I’m here. 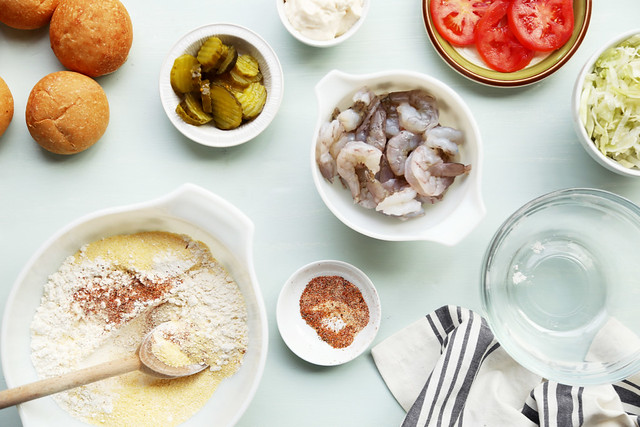 Start by mixing together the dry ingredients in a large bowl. Then in a separate bowl, whisk the eggs, milk and hot sauce.

**Note: I’m using a mixture of all-purpose flour and finely ground cornmeal for the coating. That’s how it’s done in New Orleans and I also really like the texture it gives the fried shrimp!** 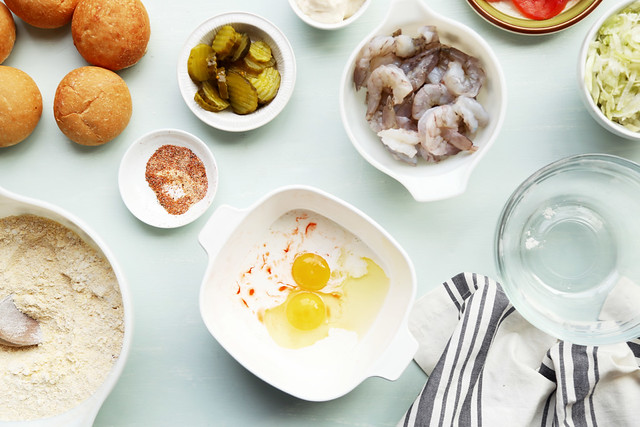 It isn’t enough for me to just season the dry coating mix. I never feel like that’s enough seasoning. So I’m going to throw some of the seasoning blend (granulated garlic, granulated onion, dried oregano, dried thyme, salt, pepper, and paprika) into the shrimp as well.

**Tip: If you have Cajun or Creole seasoning at home, feel free to use that instead of all those other spices. The spices I used are all pretty much found in the Cajun seasoning blend.** 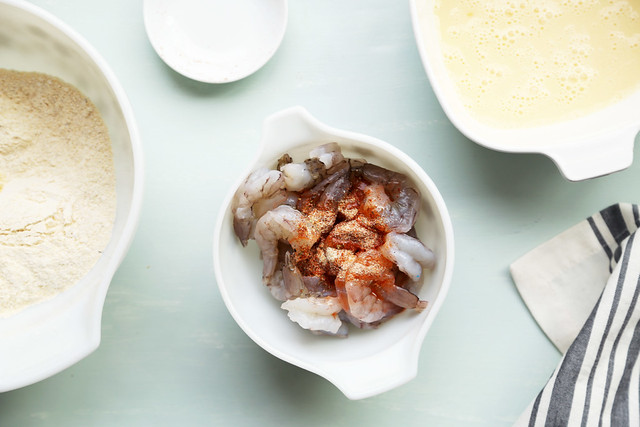 Begin coating the shrimp by running them through the dry mixture first, then the egg and once again into the dry mixture. Place on a wire rack, set over a baking sheet, to allow to set.

**Tip: Whenever I’m frying anything, I like to coat all of pieces first and then allow them to air dry a bit. This helps the coating stick!** 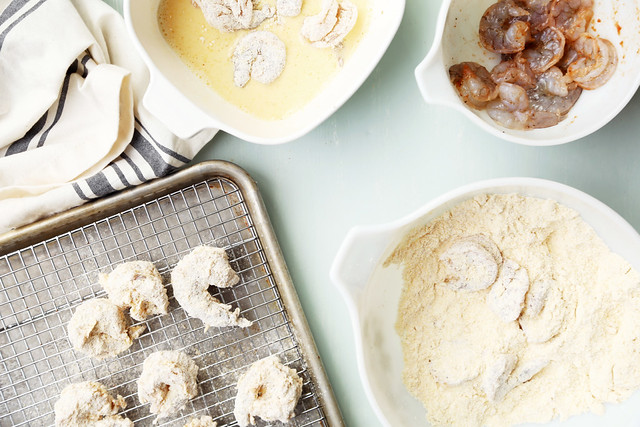 While the shrimp hangs out to the side, get the oil ready. Fill a large heavy duty pot or skillet with enough oil to fill just about half. You want the shrimp to be able to be fully submerged in the oil. Allow to heat to 350ºF.

**Tip: Whenever you fry, it’s best to use a candy thermometer to keep track of the temperature of the oil. You don’t want it too hot because it’ll burn and then whatever you’re frying will also burn. You don’t want it not hot enough, either, because then it won’t get crispy and crunchy.** 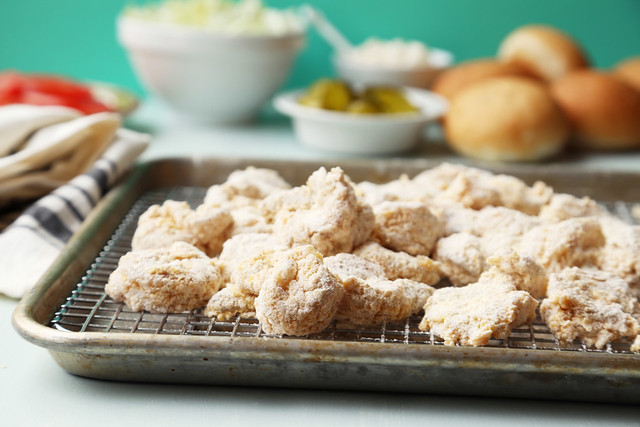 Fry in batches, for a few minutes, until golden brown and crispy. Drain and transfer to a wire rack set over a baking sheet so that the excess oil can drip off. Continue frying the rest until they’re all done. 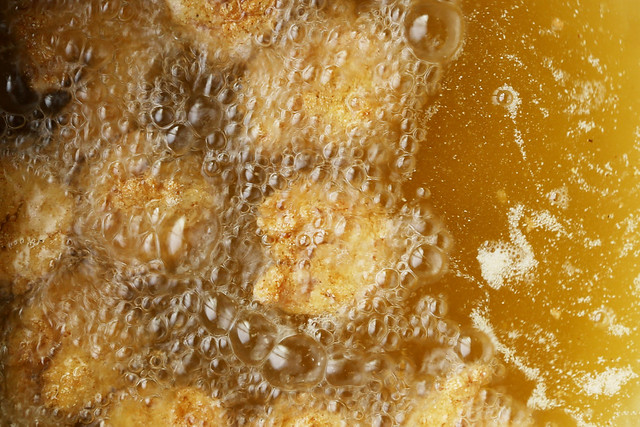 **Tip: You can rewarm the shrimp in the oven right before assembling and serving the po’boys.** 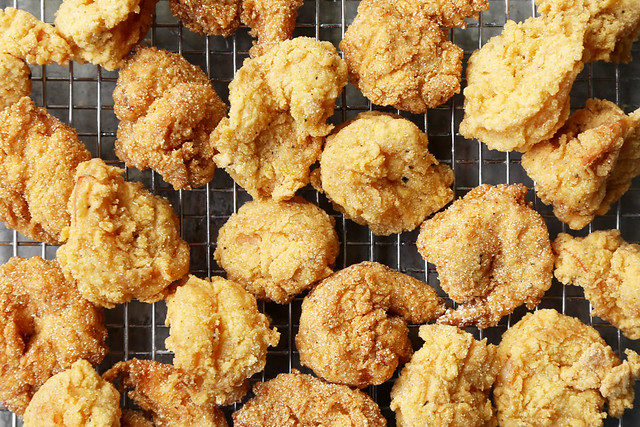 Once you’re done frying the shrimp, you can get everything else together for assembling the sliders. The first thing we need to focus on, is the sauce. It’s a simple sauce. Mayo, Creole mustard and a few dashes of hot sauce. 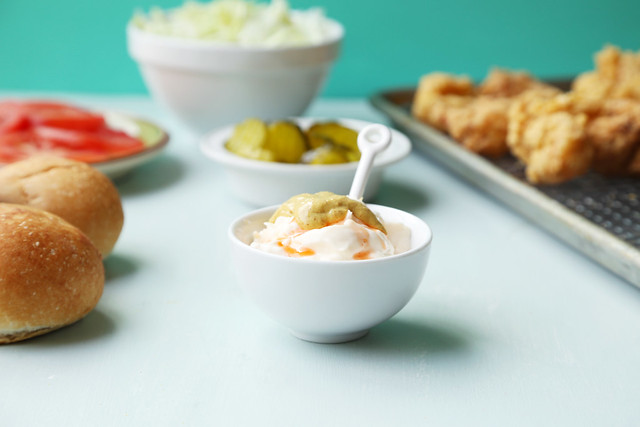 To assemble the sliders, warm the buns in the oven for a few minutes to soften. Split in half and then spread each half with some of the spicy Creole mayo. Place a few shrimps on the bottom bun and then top with shredded iceberg lettuce, tomato slice, and pickles.

**Tip: I found small dinner rolls in the bakery section of the grocery store. You can use whatever small bun or roll you find!**

**Note: You have to HAVE TO have to use shredded iceberg lettuce for these po’boys. Don’t use any other lettuce. That’s not the way it’s done in New Orleans. There’s just something about the crisp taste of iceberg that is perfect for a po’boy.** 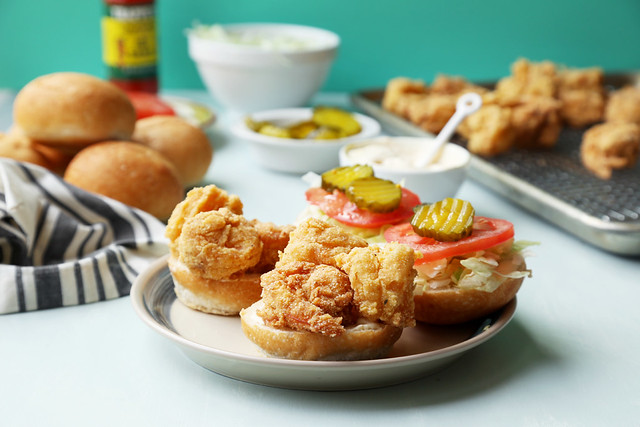 In New Orleans, they ask you if you want your po’boy “dressed” which just means if you want lettuce, tomato, pickles and mayo in your sandwich. There’s also a plethora of different options to choose from. I’ve tried a few (fried oysters, catfish, roast beef, crawfish) but my favorite is still the fried shrimp. 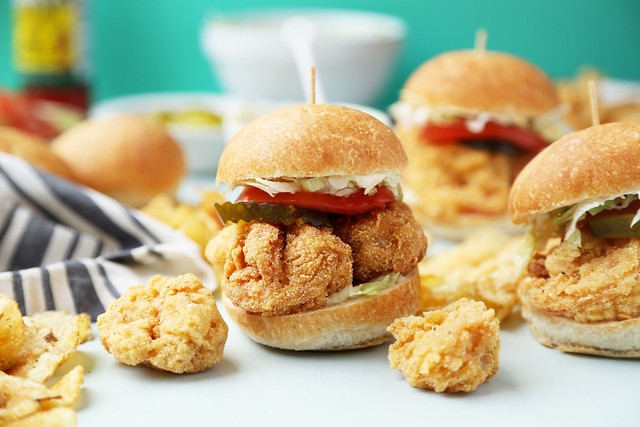 You can use smaller shrimp or even one large shrimp per slider (if you get the jumbo shrimp). Whatever works better for you, or whatever is looking good at the grocery store. Either will work. I like using medium shrimp because I can pile them onto each slider and having them spilling out just like the traditional. 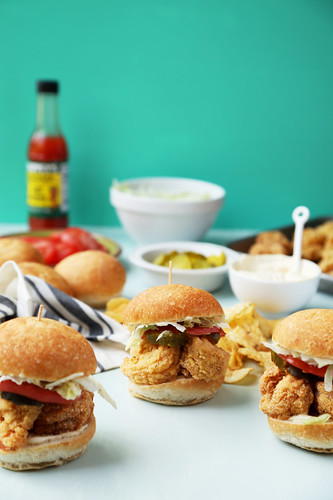 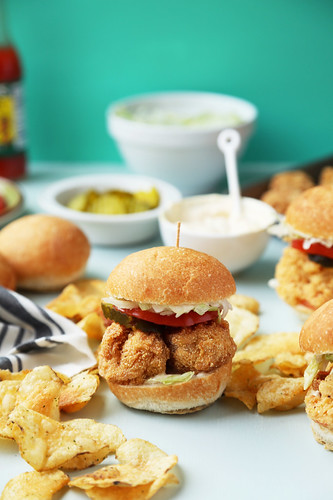 As I mentioned earlier, there are so many different types of po’boys that it can be overwhelming when trying to order and decide. Use this same method (coating and dredging) for whatever other type you’d like. Catfish, crawfish or even oysters would be great to use as well! 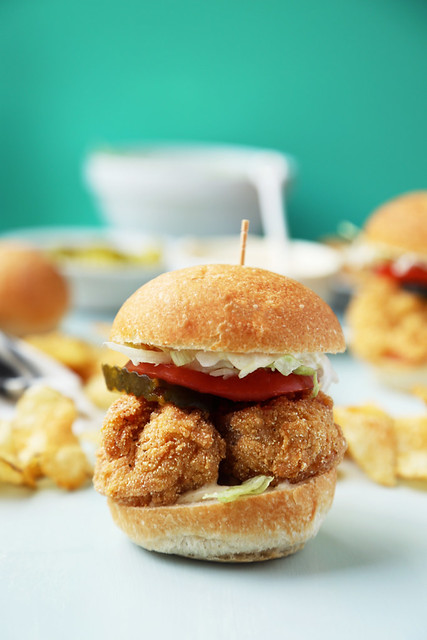 If you want to turn these into full sized sandwiches for dinner, you can easily do that too! Just grab a large French bread at the store and then cut into four even pieces. You’ll have four larger sandwiches rather than the mini slider version here. Although, I love sliders so much that I make them for dinner all the time. About three person always works out for me. Don’t forget to serve them with a side of kettle chips. That’s how I like to eat my po’boys. That or fries. I’ll never say no to fries. 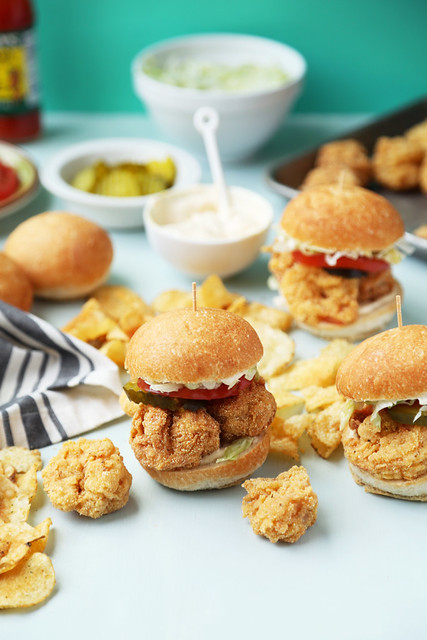 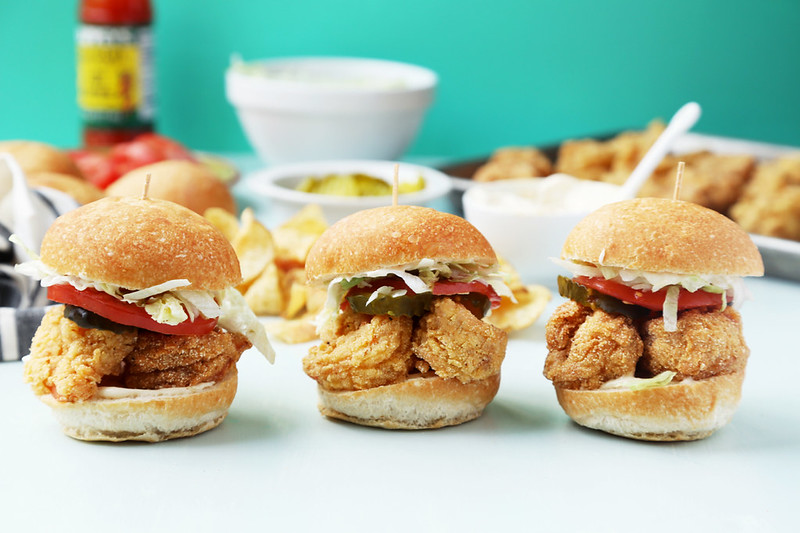 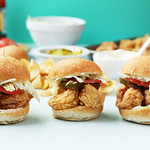