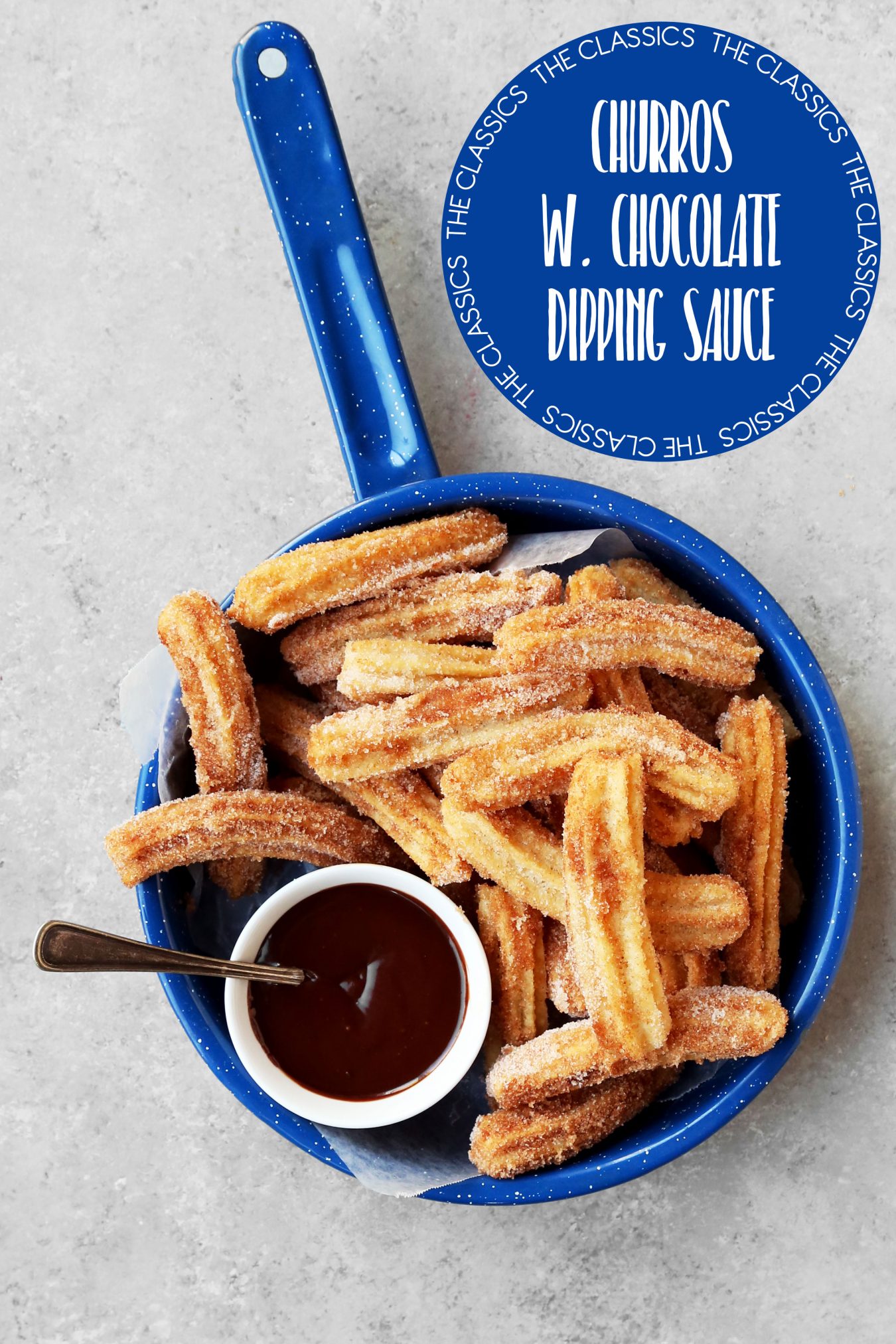 The Classics are back! It’s been a while since I’ve shared a “Classics” post on the site, mostly because I’m trying my best to balance between this segment and the Cheers to the Weekend segment on Fridays, and all of the other regular weekly posts. I decided now is a good time as any to bring back the idea of super easy and super classic recipes that we all should have under our belts. We can never have too many quick and easy recipes. These Churros with a Chocolate Dipping Sauce fit the bill. I feel like churros are one of those desserts that any and all food bloggers need to have on their site. It’s up there with chocolate chip cookies, homemade pop tarts, pumpkin pie, etc. These are all recipes that you’ve probably already seen time and time again, but even then I think it’s important to still post these recipes myself because it’s great to get a different perspective on all things in life, especially when it  comes to cooking and baking. I’ve been doing this blog for about 5 years now and I can’t believe that I didn’t already have a recipe for churros on my blog. What was I thinking? Clearly, I’ve been living under a rock. Send help. I remedied this situation finally and now we can all enjoy another churro recipe with chocolate dipping sauce. Churros aren’t that complicated to make either. Don’t let the deep-frying factor scare you off, though because as long as you have a piping bag, a metal star tip and the will to make a great treat, then you can make churros at home without breaking a sweat. I’ll show you how. 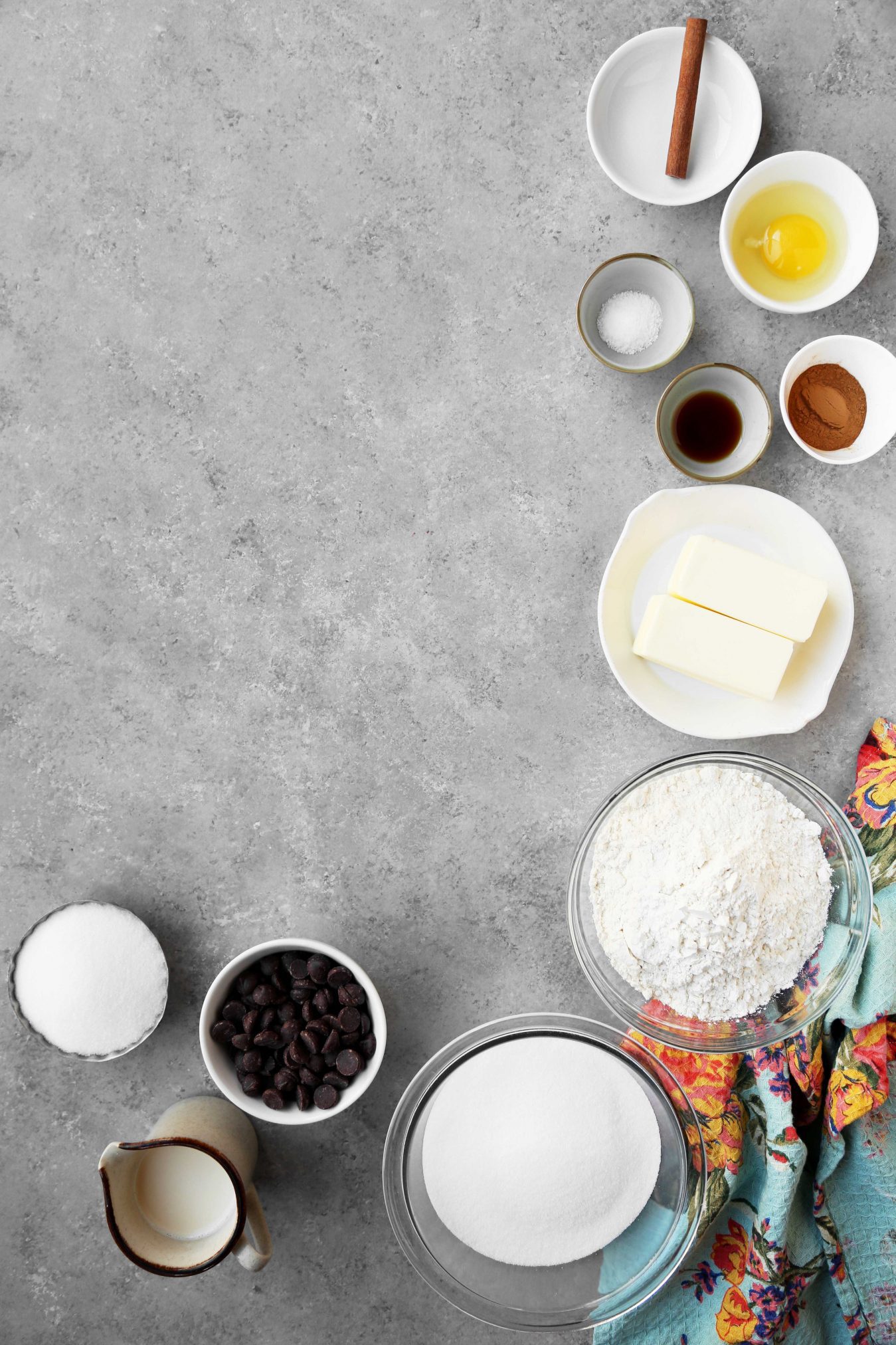 Let’s start with the churros. This process is similar to making a pâte à choux pastry dough like when you make eclairs or cream puffs. In a medium saucepan combine the water, salt, butter, vanilla and cinnamon stick. Bring to a boil over medium-high heat.

**Note: The cinnamon stick and vanilla at this stage really help with giving the dough as much flavor as possible.** 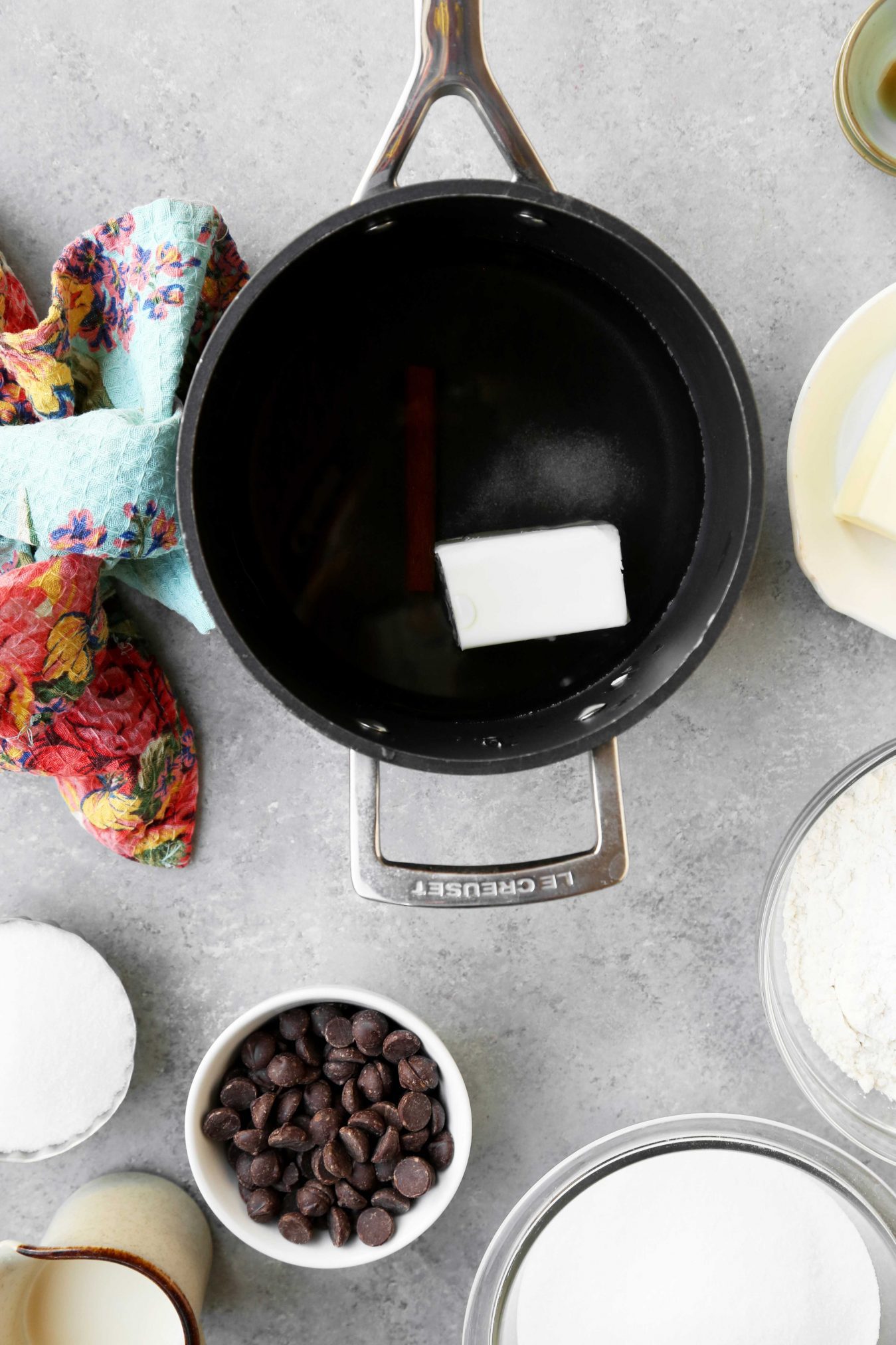 Discard the cinnamon stick, and add the flour and stir vigorously with a wooden spoon until a smooth dough forms. Cook, stirring constantly, for about 5 minutes.

**Note: It’s important to continue to stir while the dough cooks as it’ll prevent the dough from sticking and burning at the bottom of the pot.** 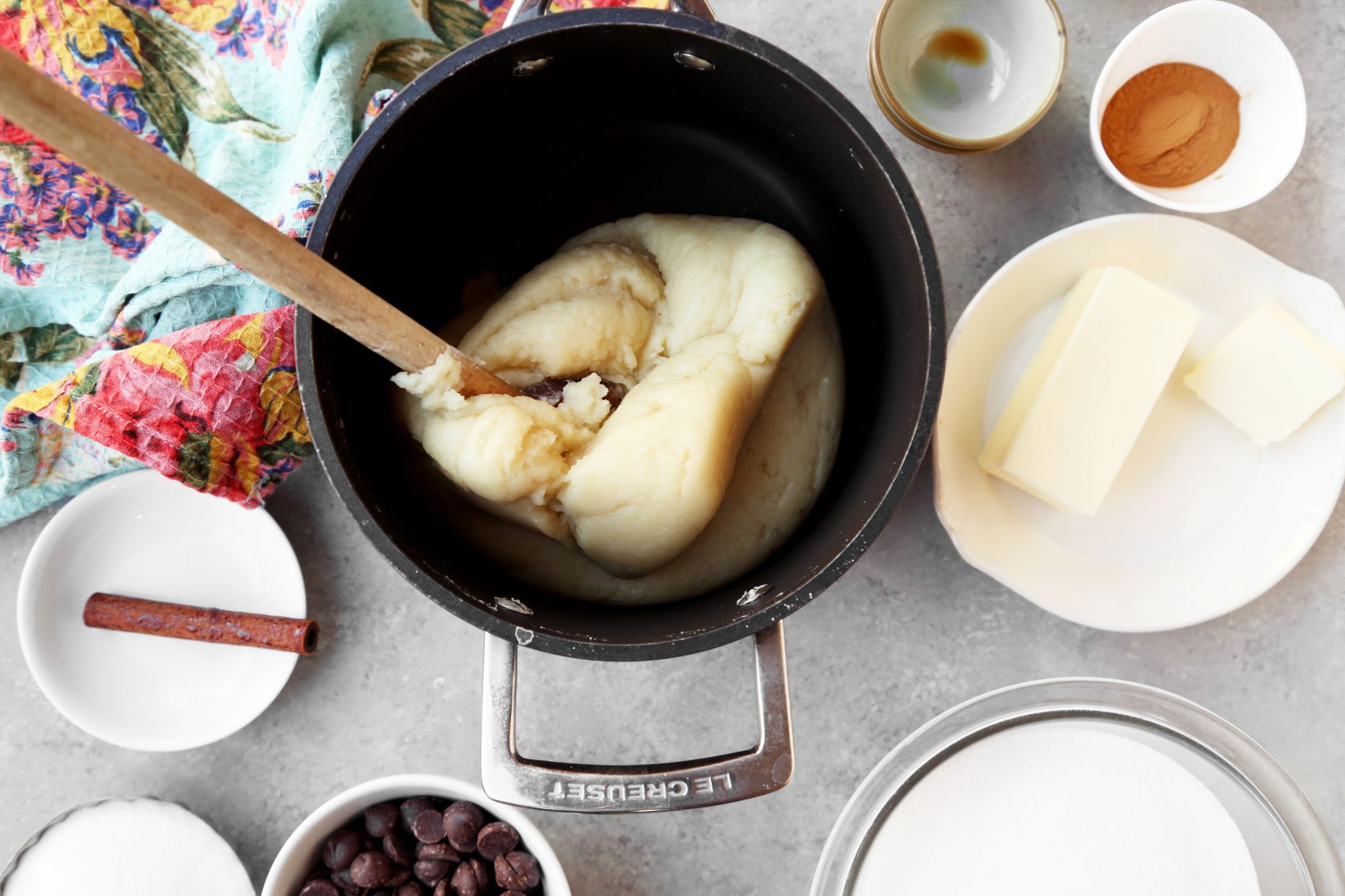 Remove from heat and transfer to a bowl and stir in the egg rapidly until smooth. Transfer to a large piping bag, fitted with a large metal star tip, set aside. 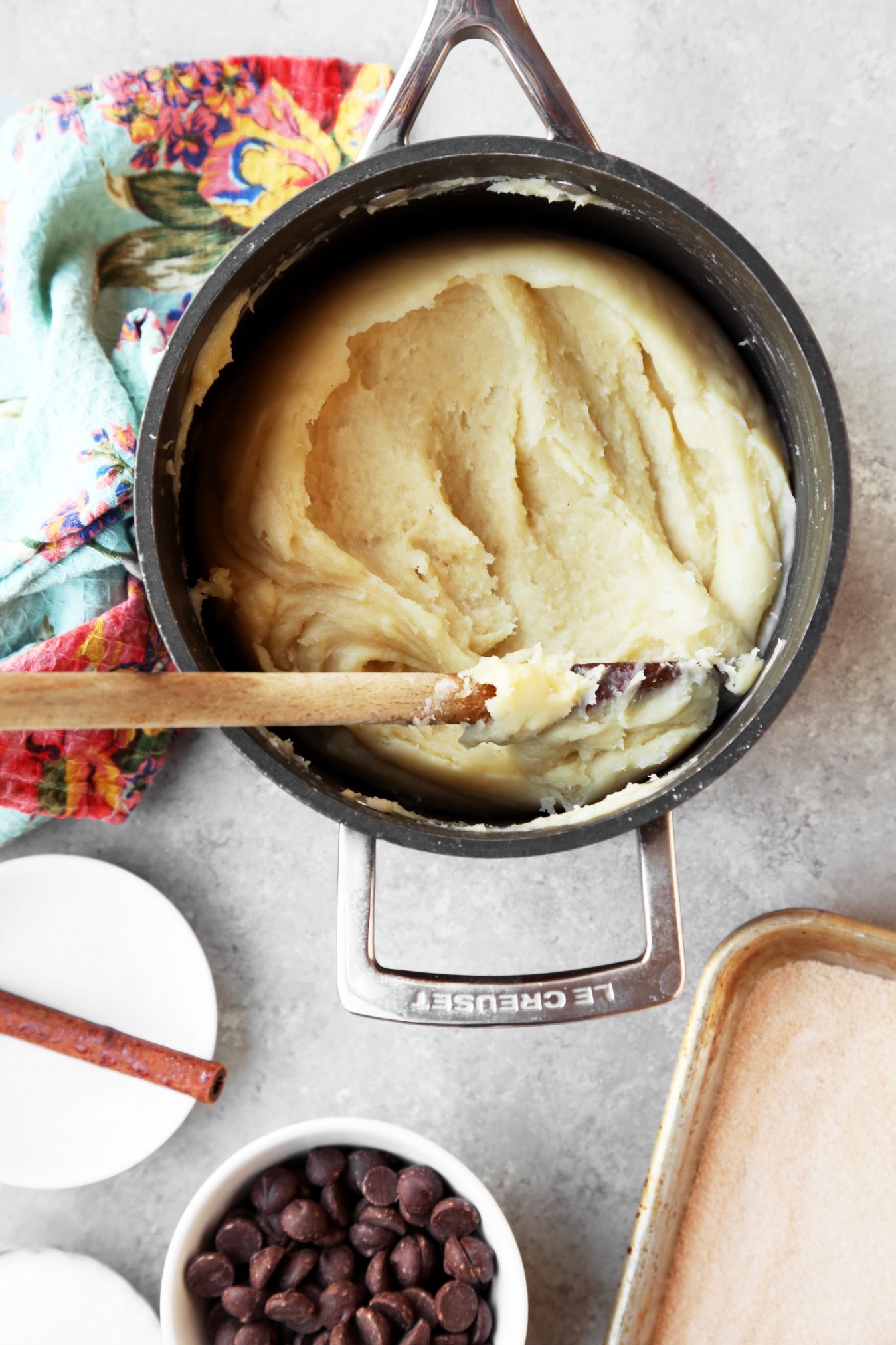 Fill a dutch oven halfway up with oil and bring to about 400 degrees F over medium-high heat, using a deep-fry thermometer. Fry the churros in batches, by holding the pastry bag over the hot oil, and squeezing out about 4-inch strands of dough.

**Tip: Use a pair of kitchen scissors or your fingers to cut away the dough from the bag as you squeeze them into the hot oil. Do not overcrowd the pot because the temperature will drop and then they won’t fry up as evenly as possible.** 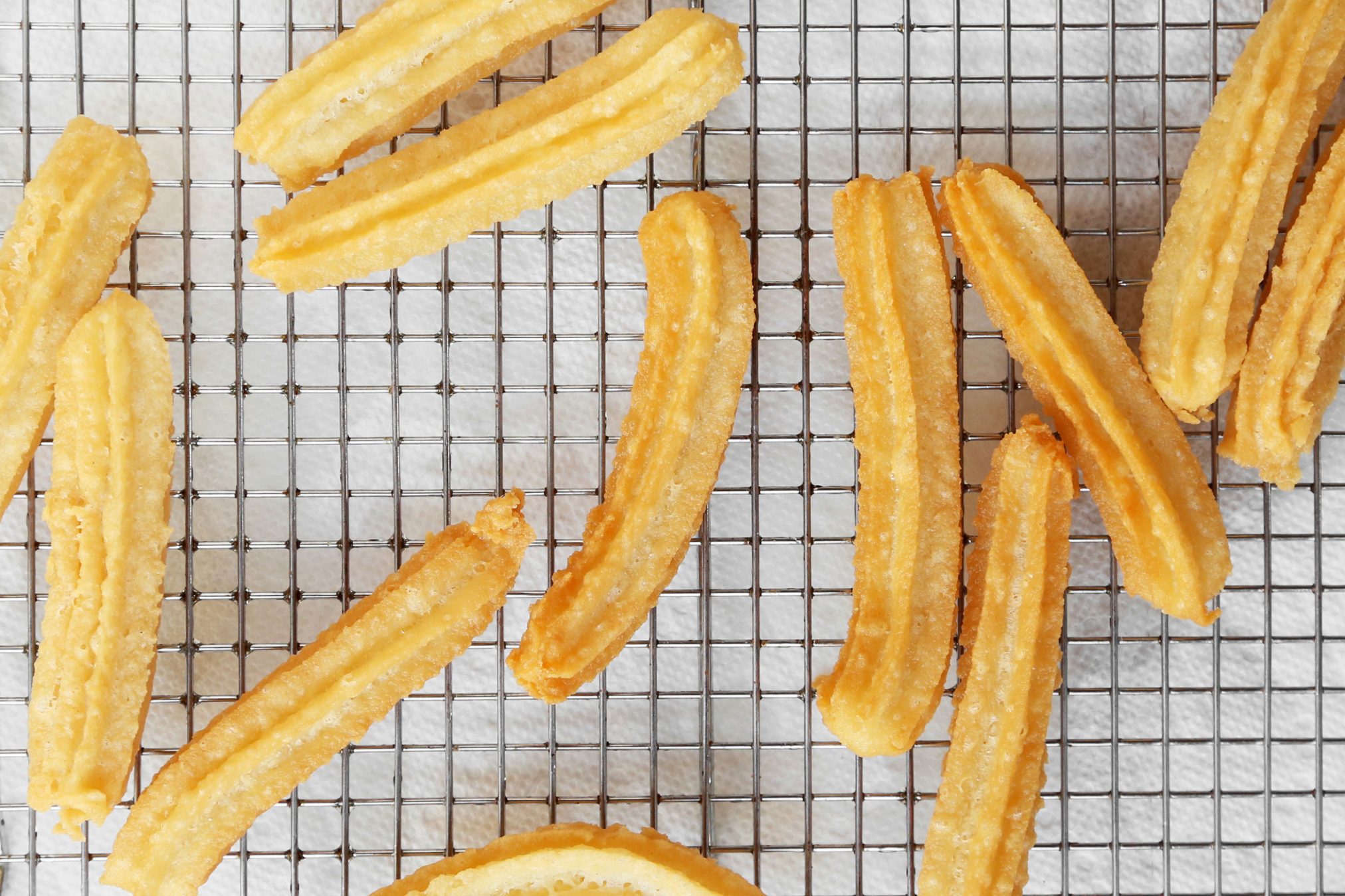 Fry until golden brown all around, about 2 minutes. If need be, flip the churros over halfway through frying to ensure they cook evenly. Drain using a slotted spoon and transfer to a plate or baking sheet lined with paper towels to soak up any excess oil. 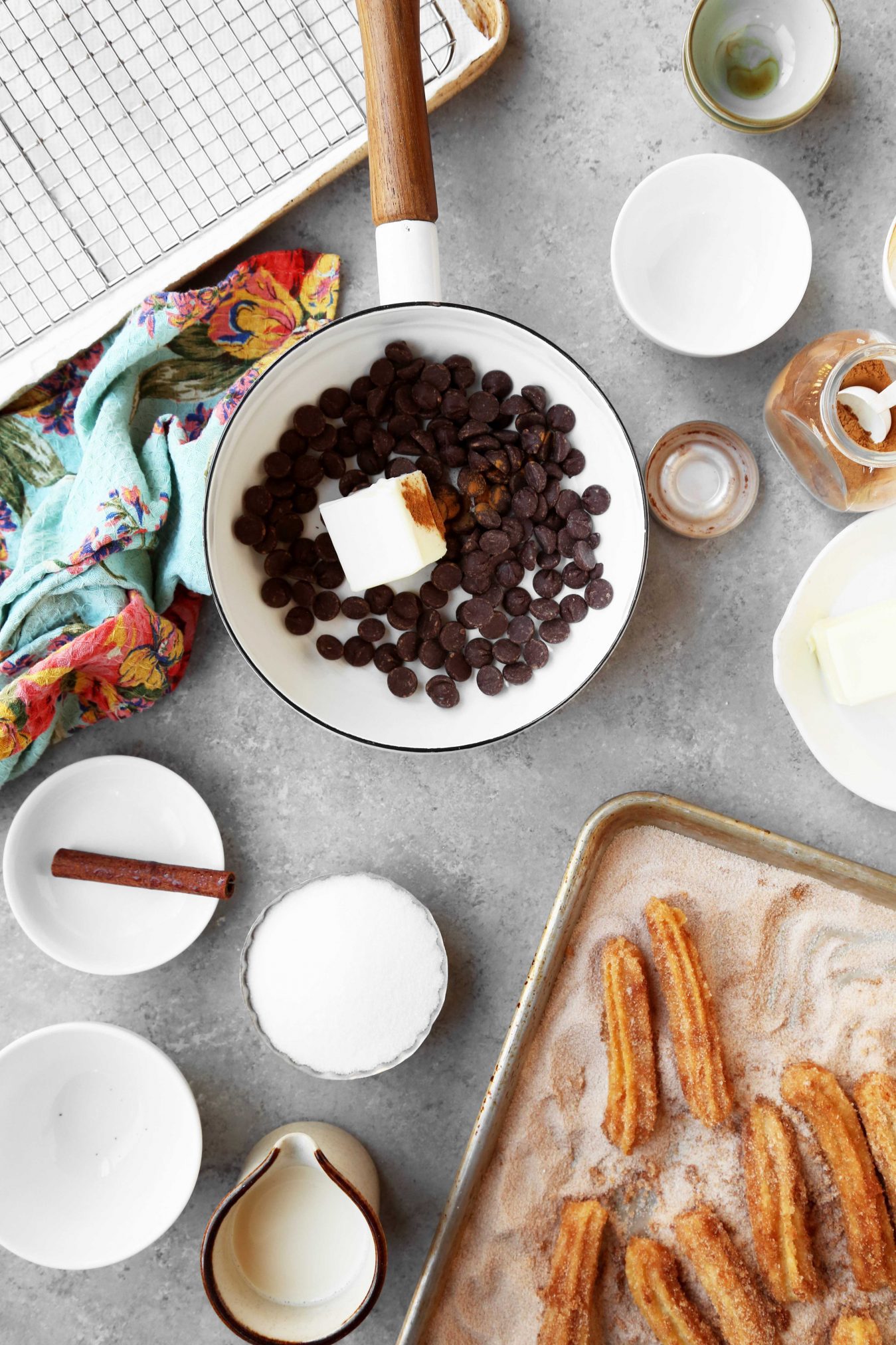 While the churros are still warm, roll them around in the cinnamon sugar mixture. It’s easy, just combine 2 cups sugar with 1 tablespoon ground cinnamon until completely combined. To make the sauce, combine the chocolate, butter and cinnamon in a saucepan. Cook over medium heat, stirring until melted through. Stir in the sugar and evaporated milk, bringing up to a boil. Lower the heat and simmer for about 8 minutes, stirring often. Remove from heat and let cool slightly.

**Note: You can make the chocolate sauce a day before and store it in the fridge until ready to serve. Just rewarm on the stove right before you plan on serving and eating!** 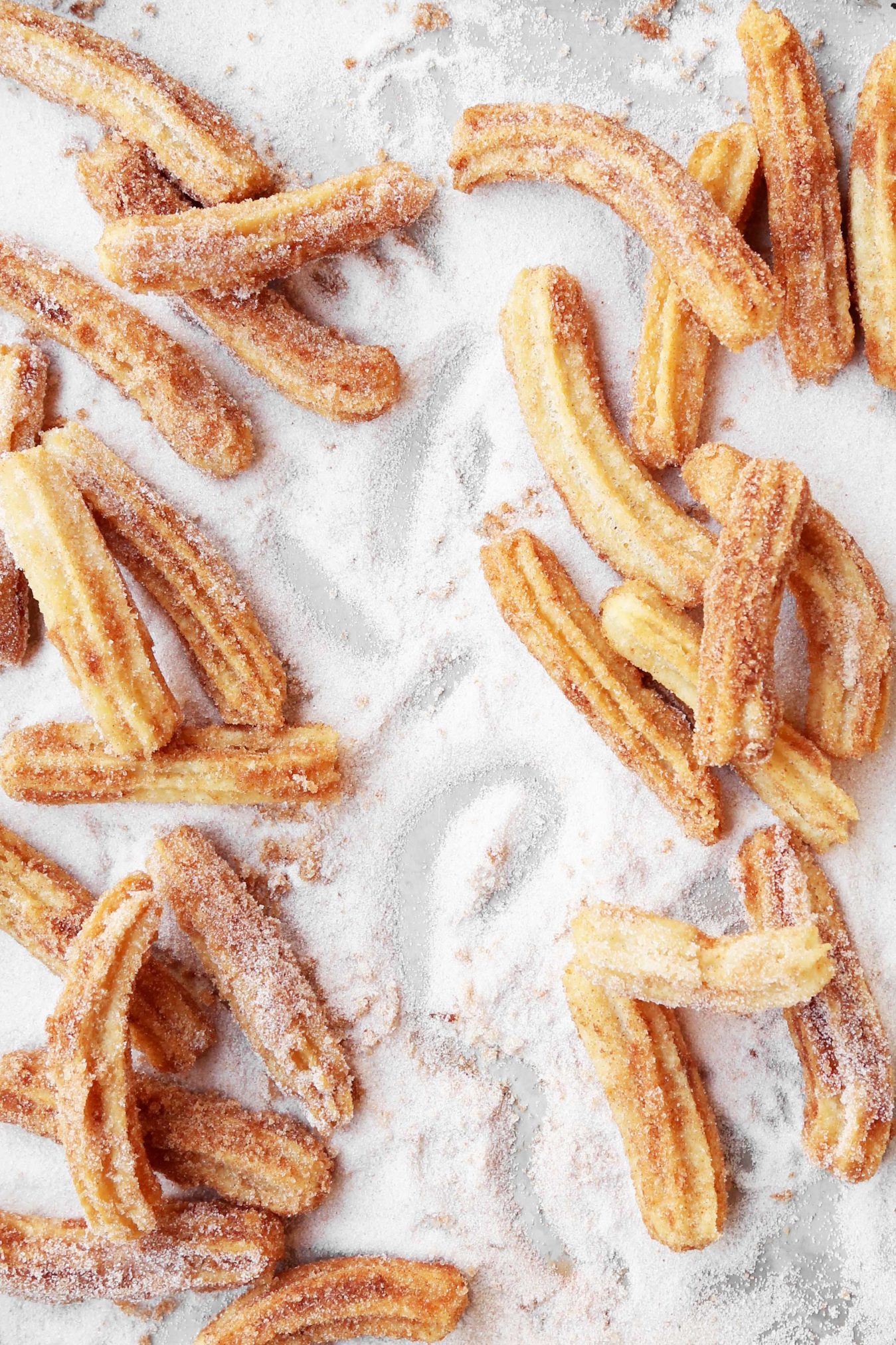 Serve the churros warm with the warmed chocolate sauce for dipping and dunking and dredging. As with almost every fried food out there, churros are best when eaten the day you make them. So plan on eating them all the same day or giving some away to friends or family, they’ll be so happy you did. 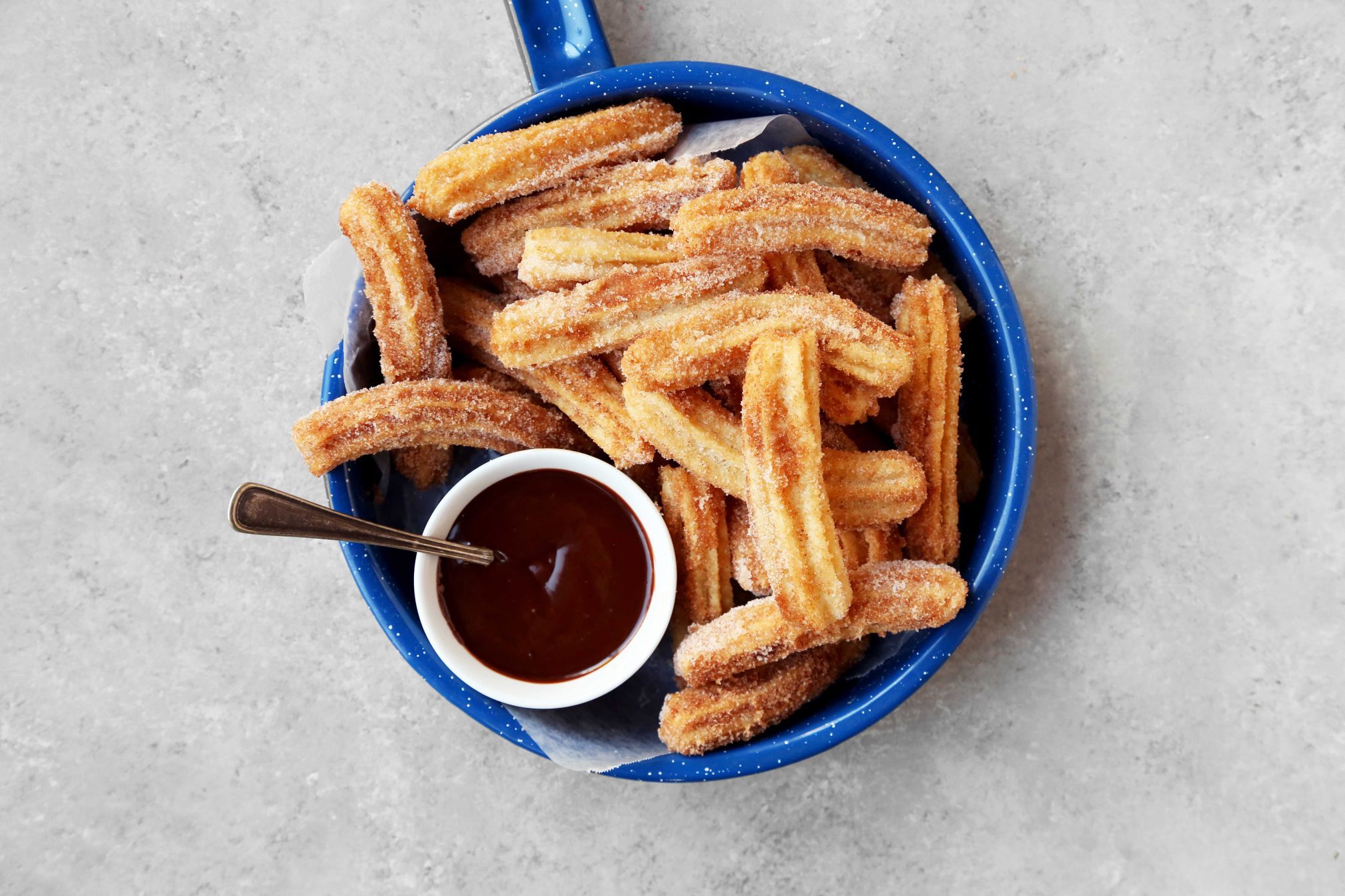 If you do want to make these ahead of time, here’s how. Fry the churros and drain on paper towels as described earlier. Allow to cool completely in a single layer on a baking sheet. Once cool, place in the freezer and freeze for at least 4 hours. Transfer to a freezer safe container or freezer bag and seal tightly. Store in the freezer for up to 3 months. 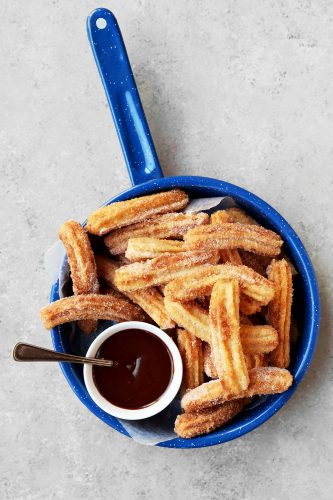 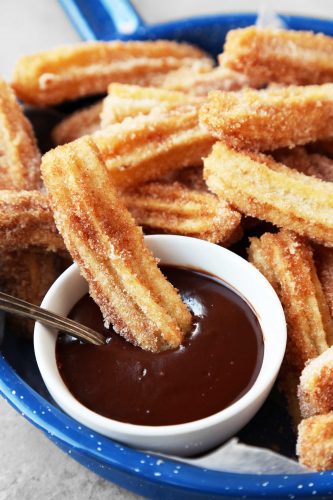 To reheat the frozen churros, place them in a single layer on a baking sheet lined with foil. Bake for about 5 to 10 minutes in a preheated 350 degree F oven. Then roll around in the cinnamon sugar and serve warm with the chocolate sauce. These are great for kids or parties and gatherings. People love churros. 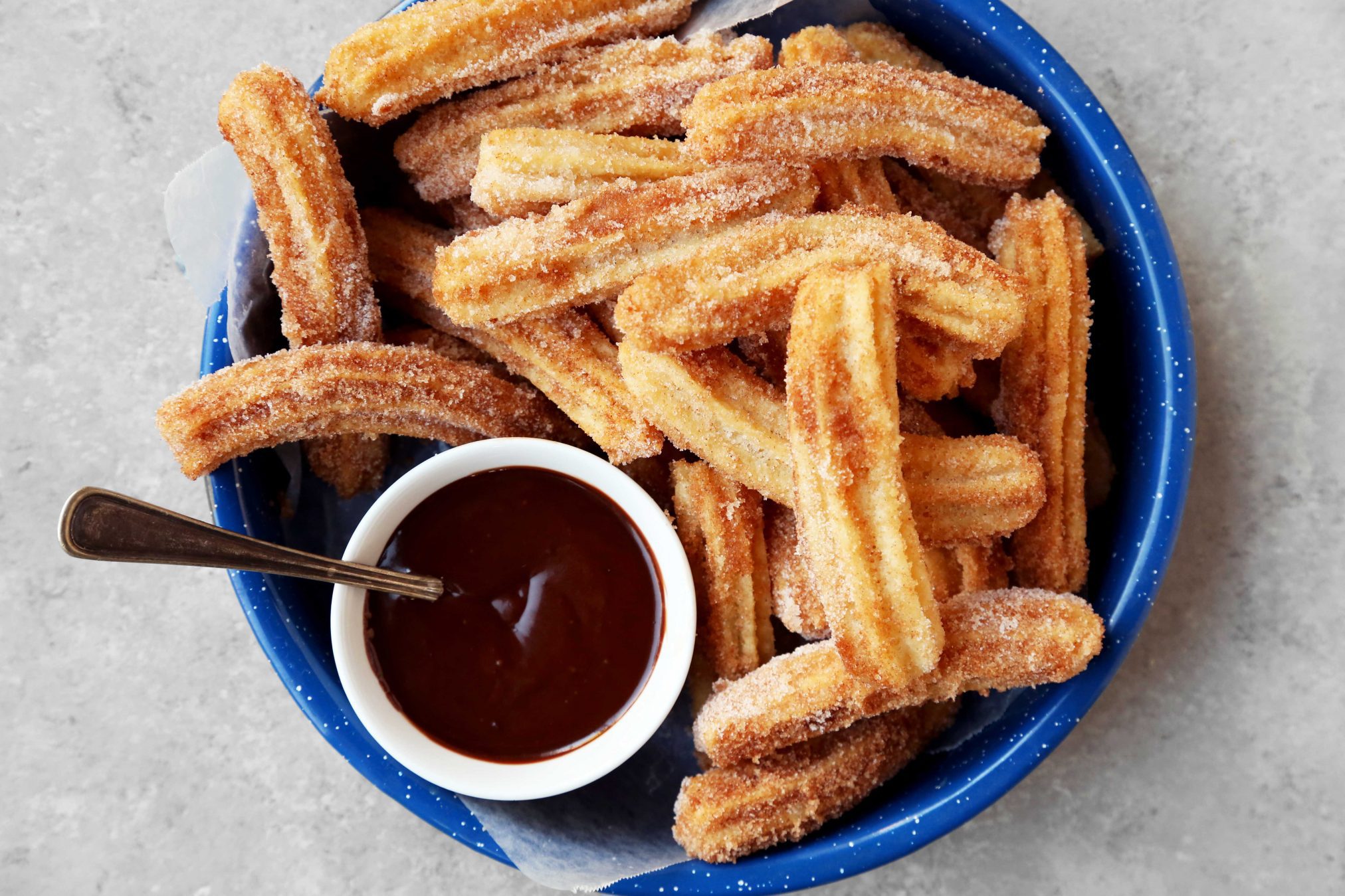 Print
Prep time
15 mins
Cook time
20 mins
Total time
35 mins
Churros with Chocolate Dipping Sauce is one of those easy recipes that you need under your sleeve. You can make it all of the time because it's perfect for parties or gatherings!
Author: The Candid Appetite
Serves: 27 to 30 churros
Ingredients
Churros
Chocolate Sauce
Instructions
3.5.3251

Croissant Ham and Cheese Egg Bake will be your new