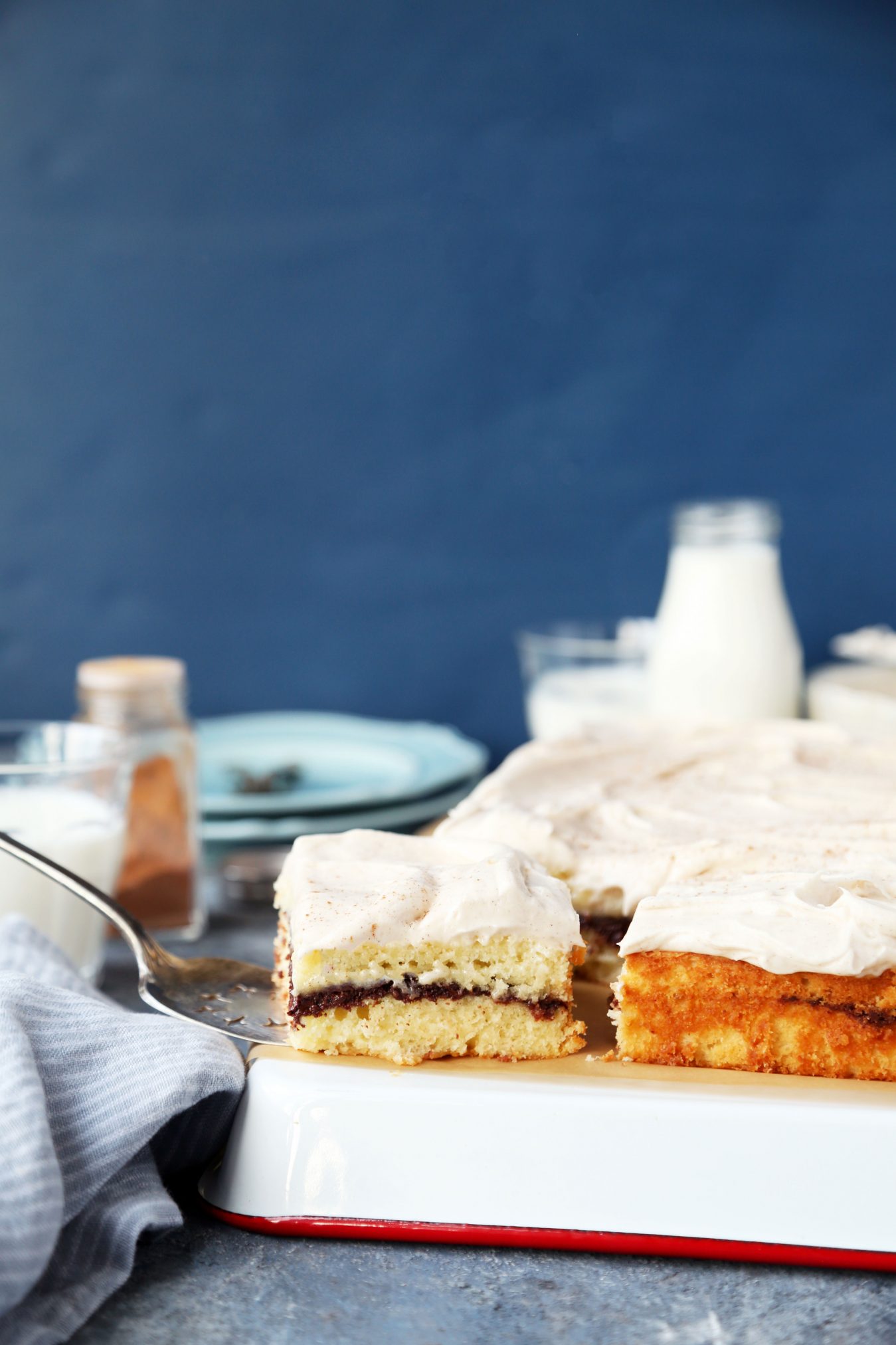 I’m really into sheet cakes at the moment or sheet pies—aka slab pies aka the lazy person’s dessert—because they’re really easy to make and they yield an enormous amount which makes them great to feed a crowd…or satisfy a lonely party of one, depends on how you look at it. I’m not judging. This vanilla sheet cake is filled with a chocolate cinnamon brown sugar layer and topped with a fluffy cream cheese cinnamon buttercream, that when combined, all come together to create a cake that tastes *just* like a cinnamon roll, but so much better because it’s cake and I always have a soft spot for cake. I don’t even discriminate, I’ll take any and all cake. This one here, I have a feeling, will become your new favorite birthday cake to make for your family, for your friends, and definitely for yourself. Just don’t forget the ice cream. What’s a birthday cake without ice cream? A sad one. 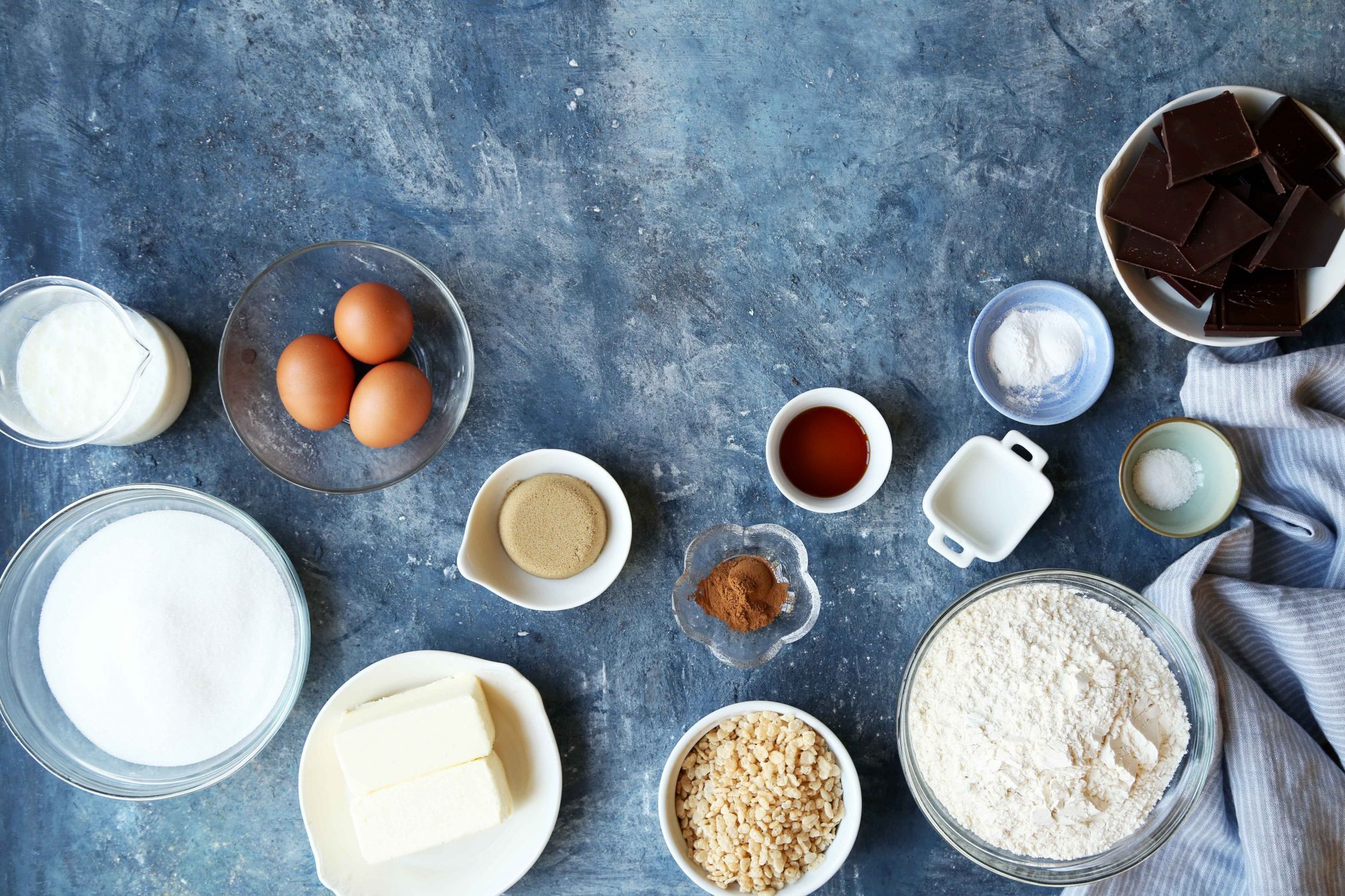 Let’s start by making the cake, which is a pretty basic vanilla cake recipe. So if you’re ever in need of a vanilla cake batter for making layered cakes, keep this one in mind. Whisk or sift together the flour, baking powder, and salt. Set aside. 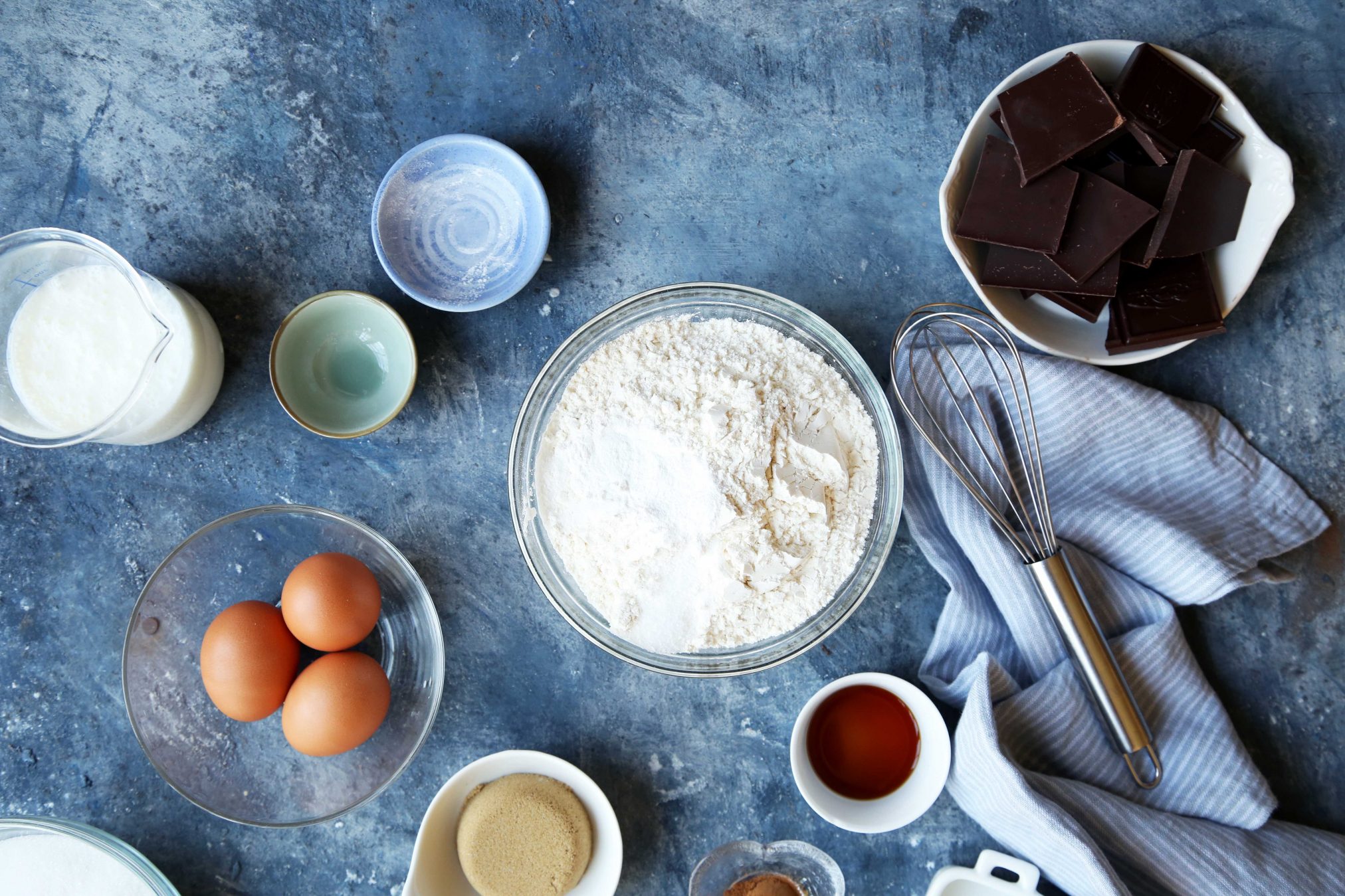 Then beat the butter and sugar until light and fluffy, about 5 minutes. Stir in the eggs, one at a time, mixing well after each addition.

**Tip: you might have to stop every so often to scrape the sides and bottom of the bowl with a rubber spatula. This will ensure even mixing of the batter.** 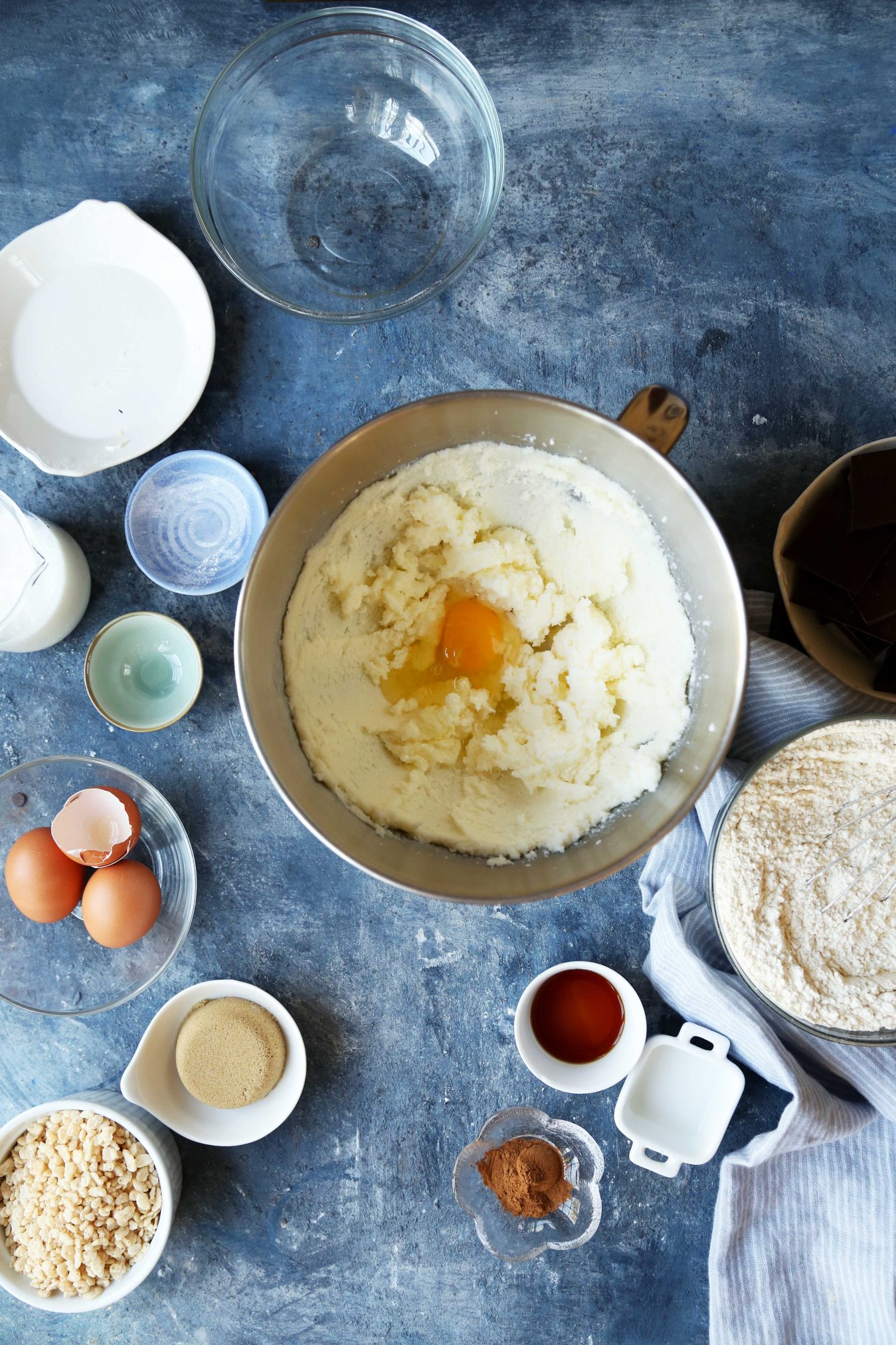 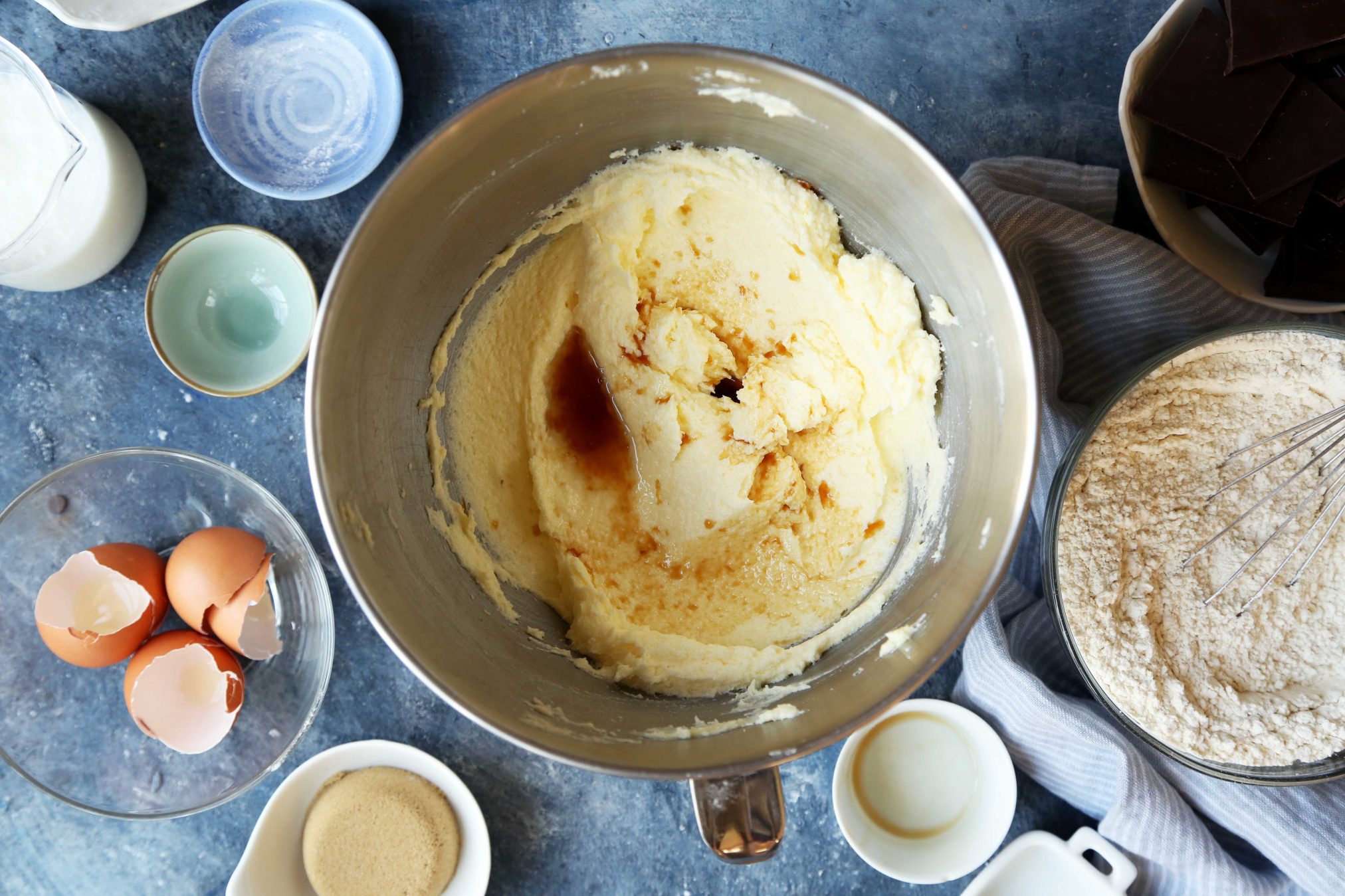 Combine the chocolate, rice cereal, brown sugar and cinnamon in a food processor. Pulse a few times, until the mixture is evenly chopped up and resembles fine sand.

**Note: I know it might be weird to see the addition of rice cereal in this recipe, but really really for texture. I was skeptical too, but believe me it’s great.** 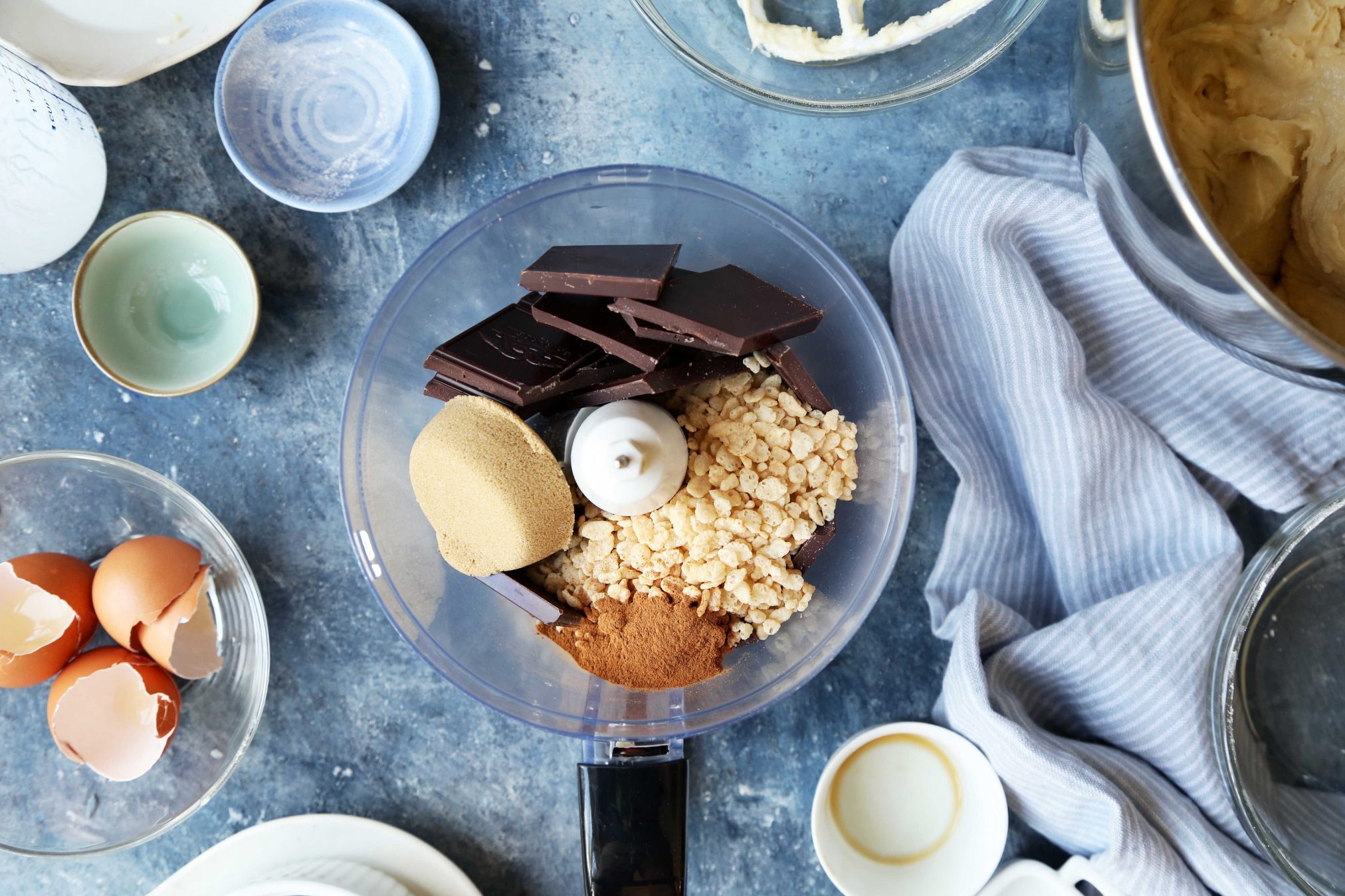 I’m using bittersweet chocolate that i’ve chopped up, but you can use chocolate chips if you’d like or even dark chocolate instead of bittersweet. Whatever you prefer. 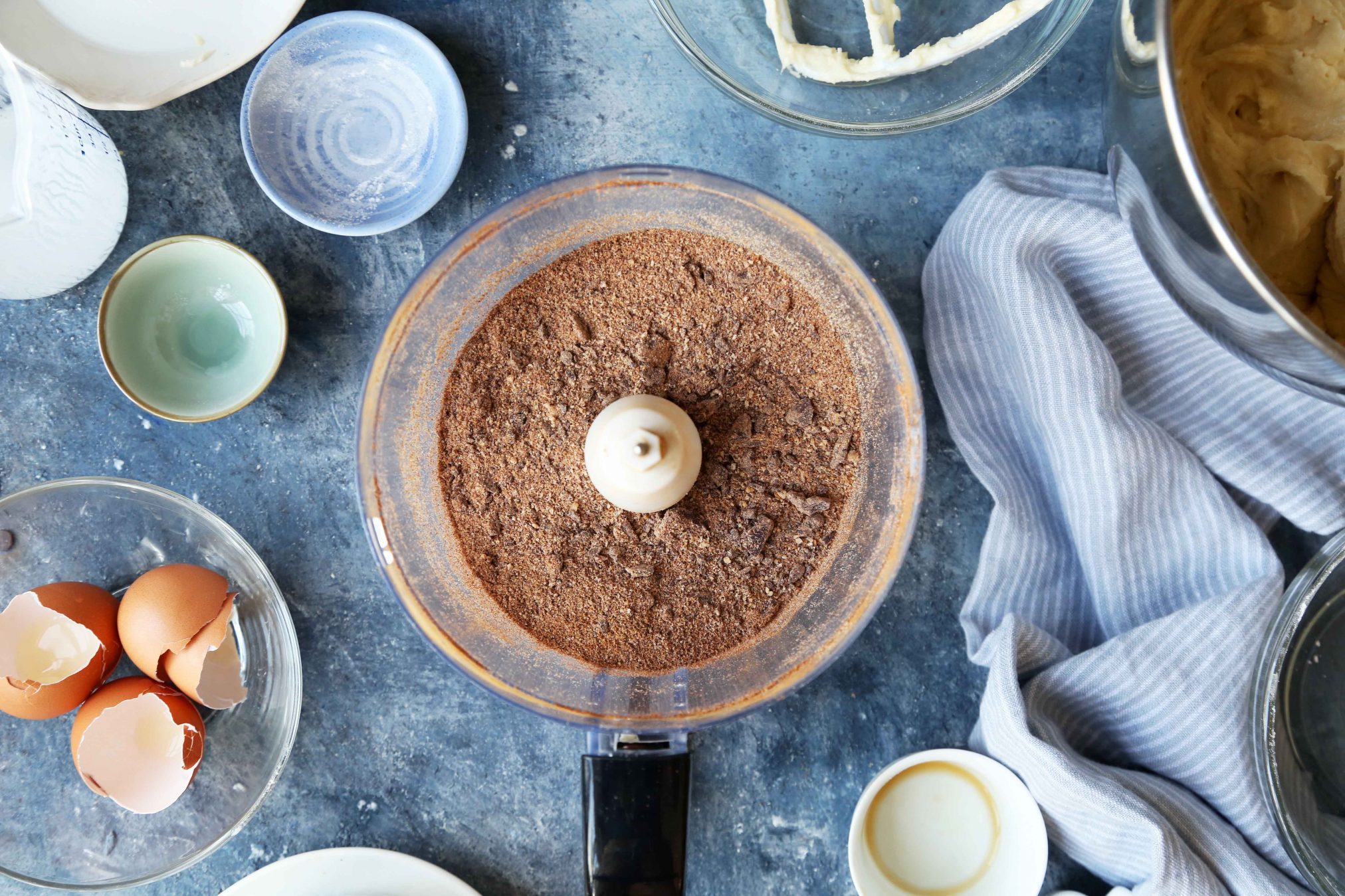 Spread half of the cake batter into a 9 by 13-inch baking pan that has been lined with parchment and greased with cooking spray. 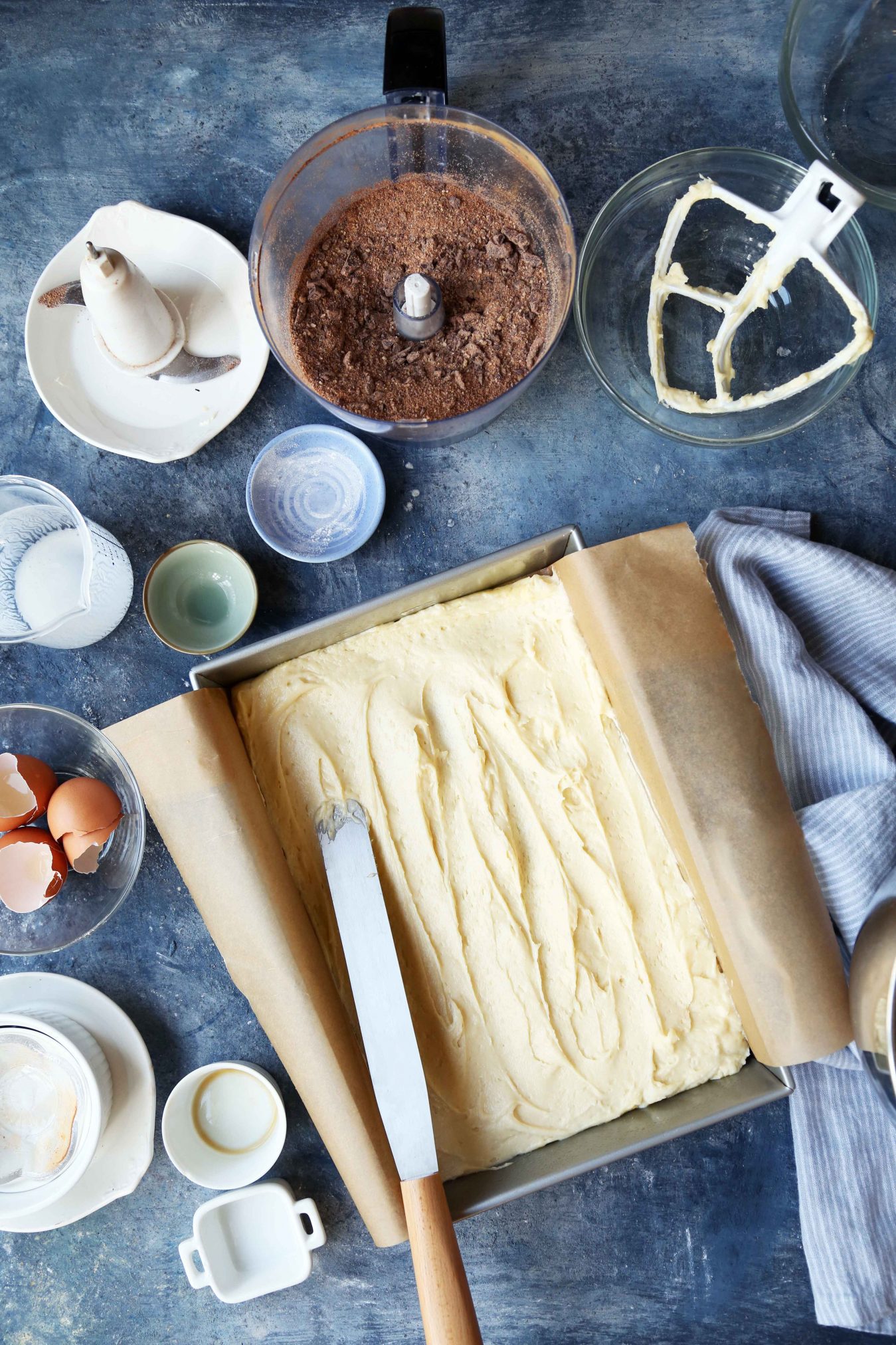 Pour the chocolate cinnamon mixture over the top, making sure to spread out as evenly as possible over the cake batter. 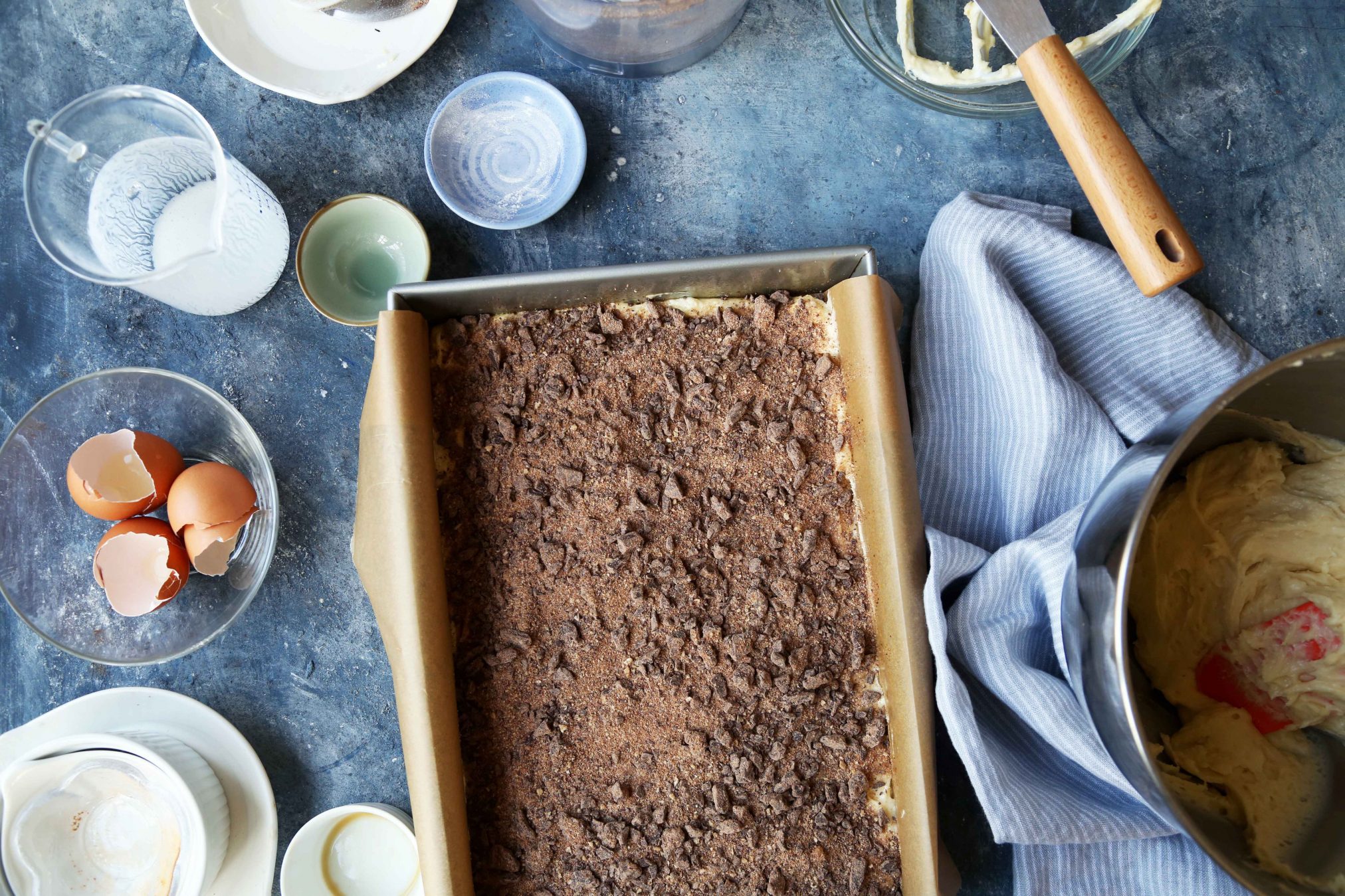 Then dollop the remaining cake batter over the top and spread out as best you can. It can be a bit tricky because the batter is thick and the filling is so dry.

**Tip: I recommend dolloping the cake batter around the top with a small ice cream scoop, then using a straight-edge metal spatula to spread out the batter as best you can.** 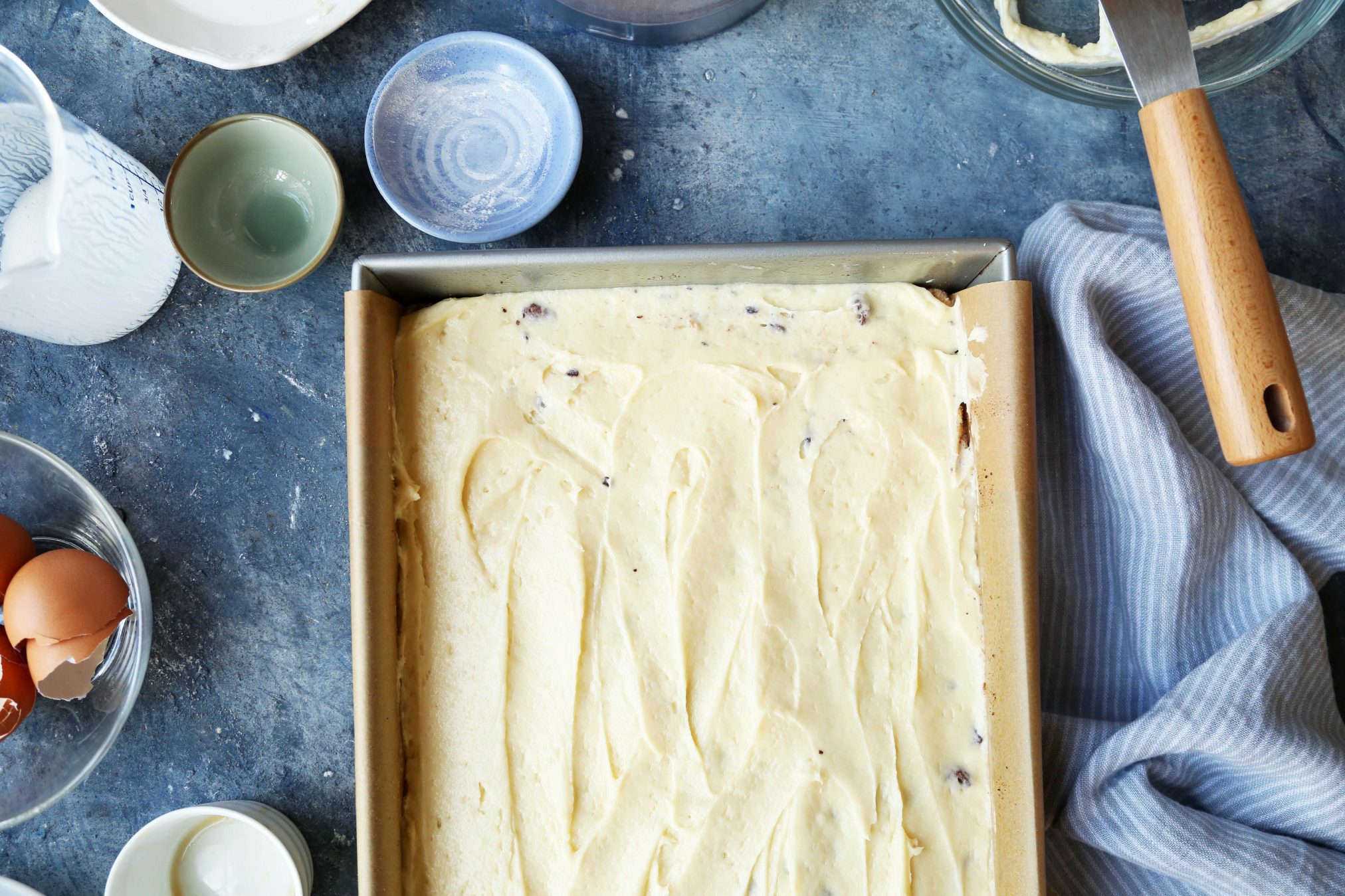 Bake the cake for about 30 to 35 minutes, or a until a toothpick inserted in the middle comes out clean. Remove from the oven and allow the cake to cool completely. Invert the cooled cake onto a latter platter or upside-down baking sheet. Dollop the cake with the cinnamon buttercream and then spread out evenly. 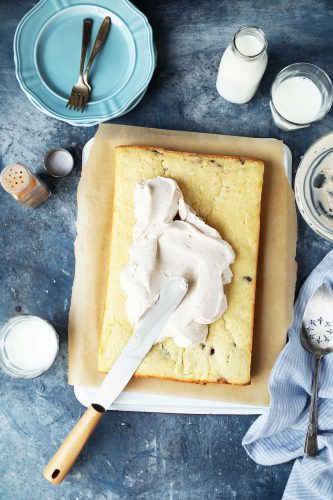 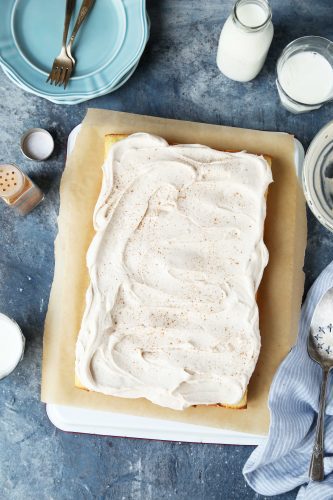 You can sprinkle the top of the cake with a bit more ground cinnamon for garnish and added flavor. If you ask me, there can never be too much cinnamon on anything. It’s my favorite spice. 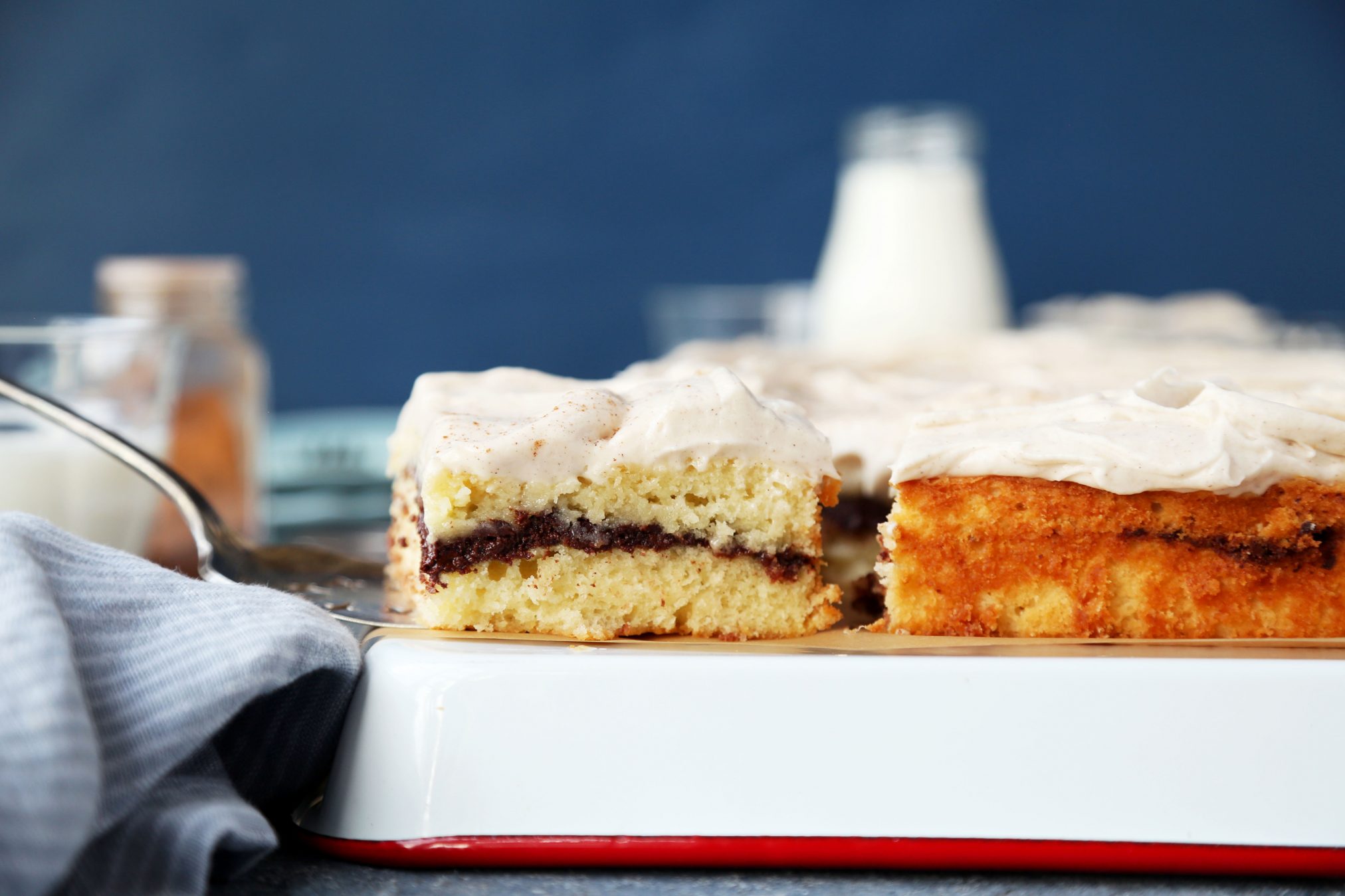 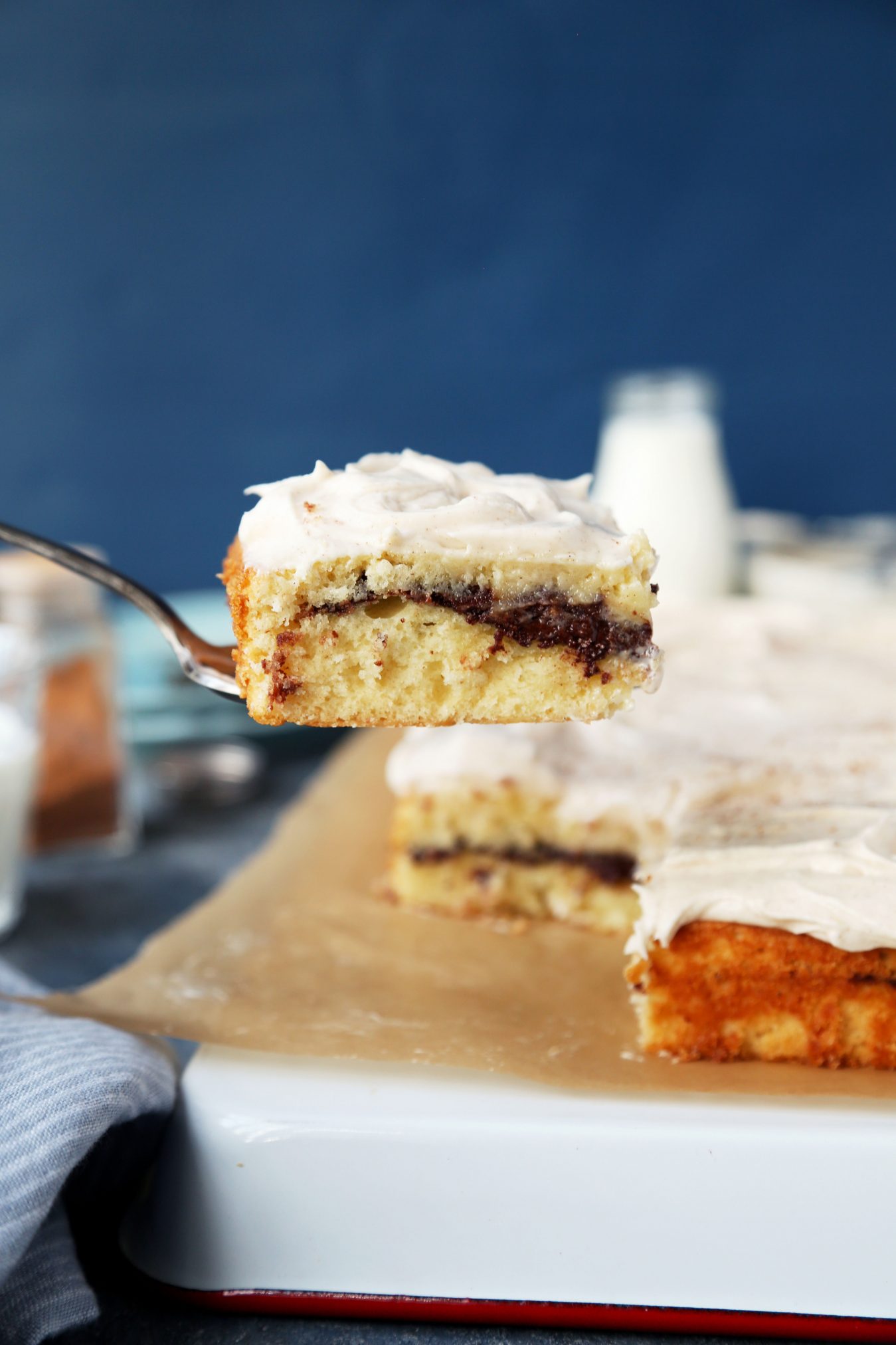 You can also turn this sheet cake into cupcakes, by dividing half of the batter among a cupcake tin lined with paper liners. Sprinkle with the filling and then top each with the remaining batter. Bake for about 18 to 20 minutes, let cool, and then frost with the cinnamon buttercream. 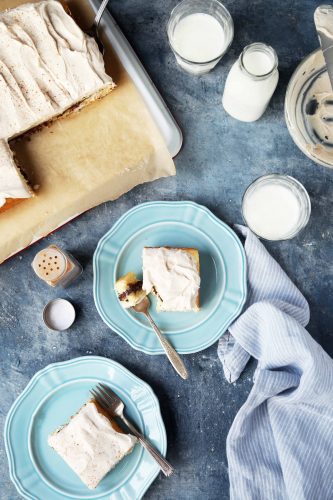 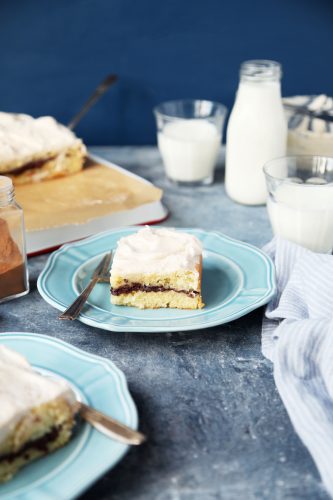 I do want to say that this cake would be AMAZING for a birthday, and if it was my birthday, I’d be super happy to eat it. All I ask is that you serve it with vanilla or cinnamon ice cream because you can’t have birthday cake without ice cream. It’s sacrilege. 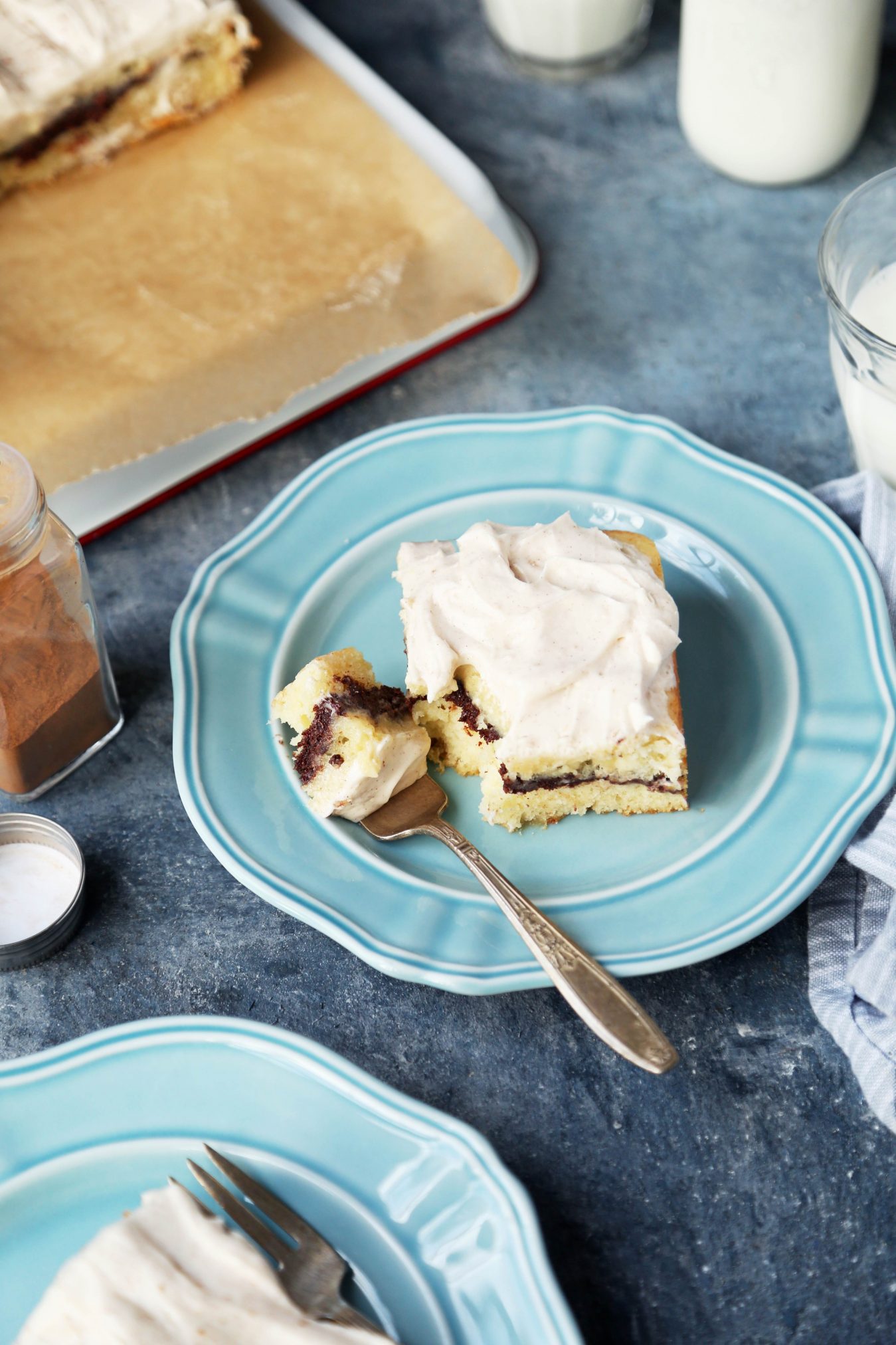 This would be great as a chocolate cake base as well. So you can easily swap out the vanilla cake batter for chocolate or even pumpkin spice cake since it’s the season for all things pumpkin. It’s a great cake, so give it a try! 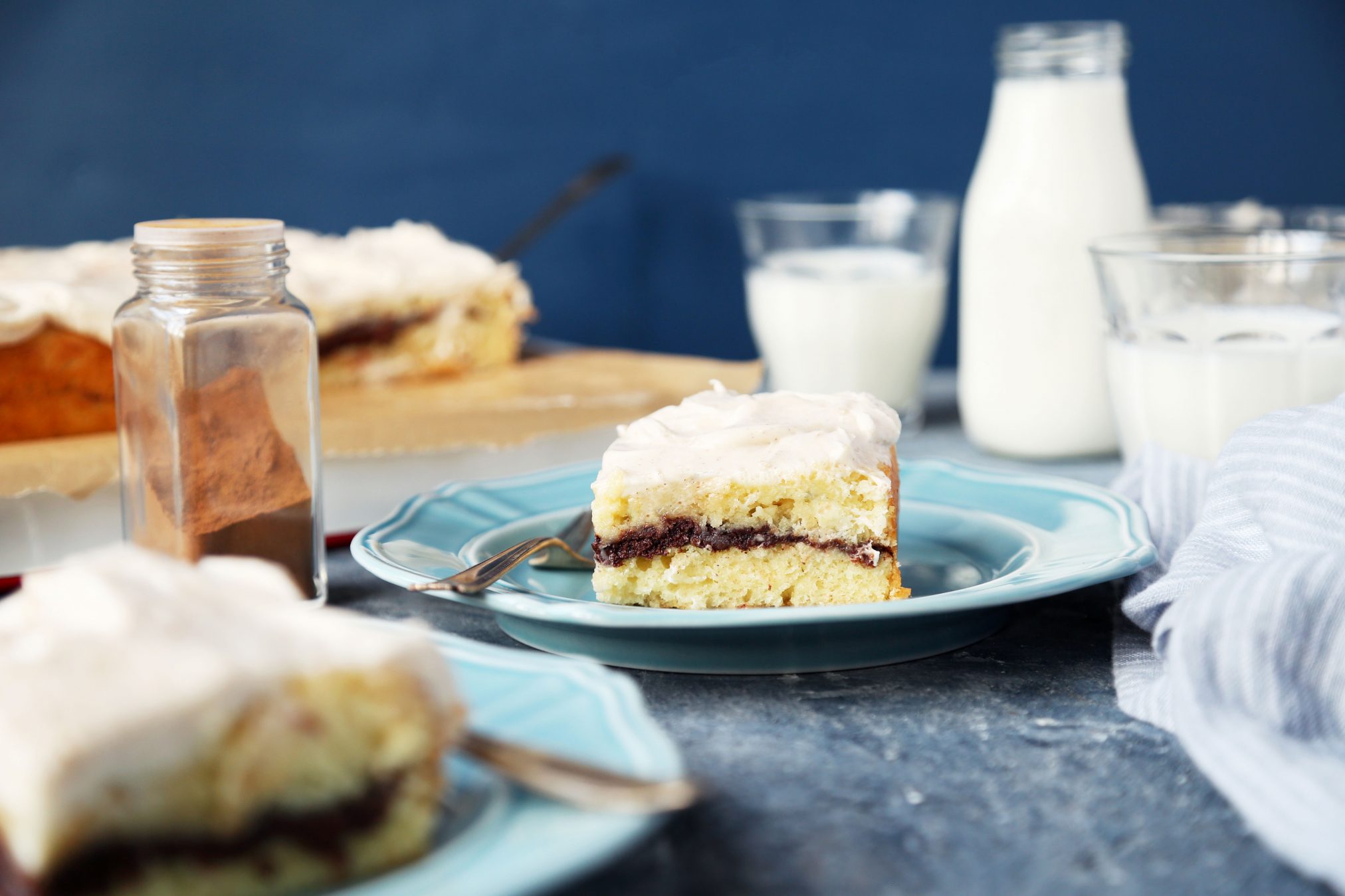 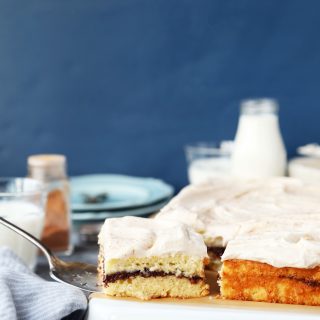