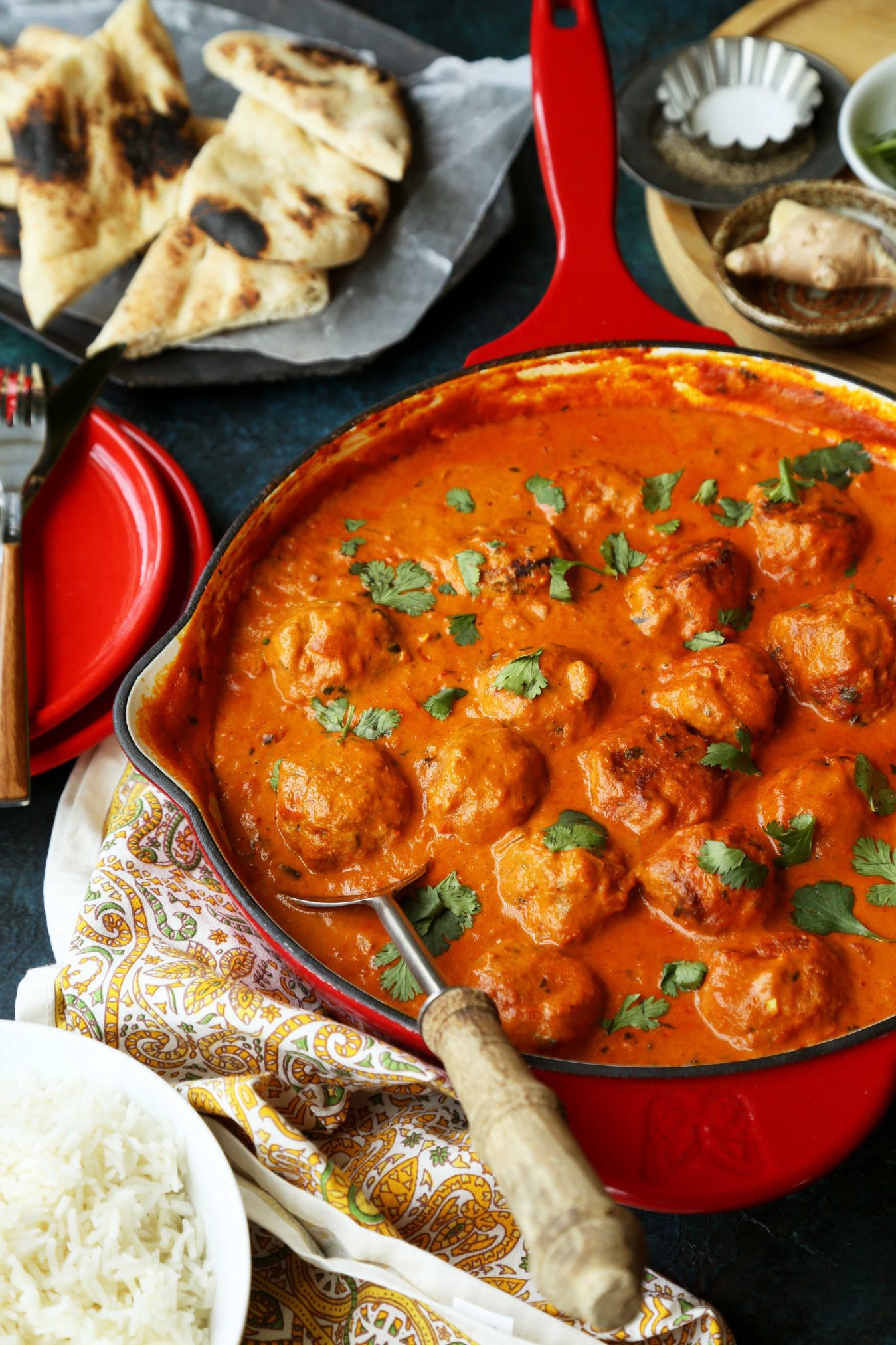 As someone who is constantly and consistently surrounded by food day in and day out, I often get asked what my favorite dish is, or what’s the cuisine I can’t live without? I’ve always hated answering this question because it’s one of life’s hardest questions to answer; Spoiler Alert: I don’t think I can ever truthfully answer. It’s very hard to pinpoint one dish or cuisine to call my all-time favorite because I happen to have an ongoing love affair with food. I don’t want to say that everything is my favorite because let’s be honest that’s a bit of a cop out. What I will say however, is that my mood changes from week to week. One thing is certain though, Indian food happens to be my favorite type of cuisine…right now. Whenever I don’t feel like cooking and Jules and I decide to order take out, it’s always for something that I don’t really cook at home myself. So it’ll typically be Asian or Indian food. With that being said, our local Indian restaurant on speed dial and the one dish we always get is tikka masala which is pretty basic but I love it either way. Last week we ordered some and I got the sudden urge to make it at home but with chicken meatballs. I thought it was the most clever thing I’ve come up with recently, and so here we are. Chicken Meatball Tikka Masala is your new favorite weeknight meal. 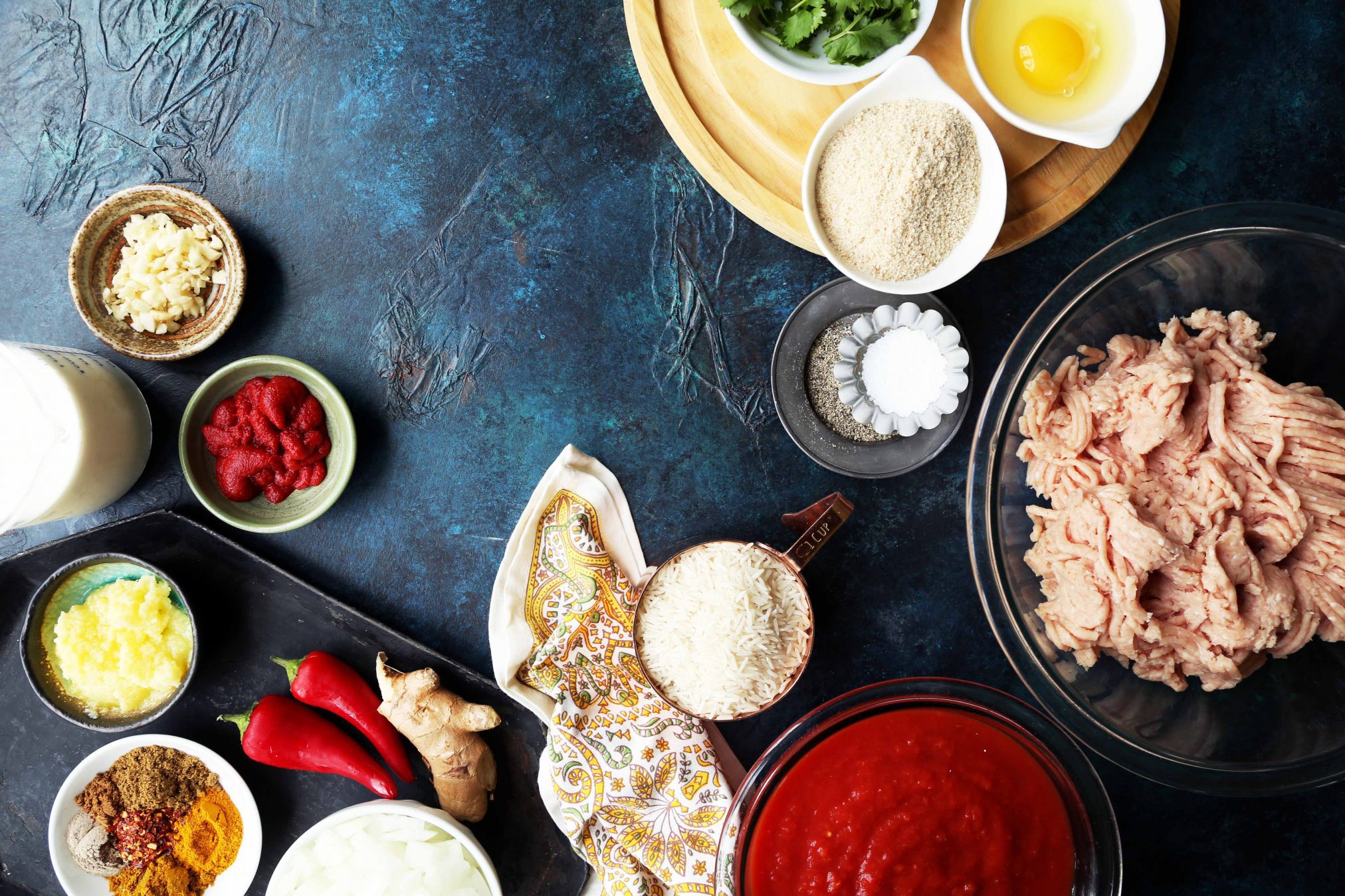 Let’s start by making the meatballs. Because chicken tikka masala is typically made with chicken (it’s right there in the name), I decided to make this with ground chicken. It just makes a lot of sense. So in a large bowl, combine the ground chicken, bread crumbs, cilantro, egg, tomato paste, salt, pepper and graham masala.

**Note: Garam Masala is an Indian seasoning blend that differ in spices at times but most notably include coriander, cumin, cardamom, cloves, black pepper, cinnamon, and nutmeg.** 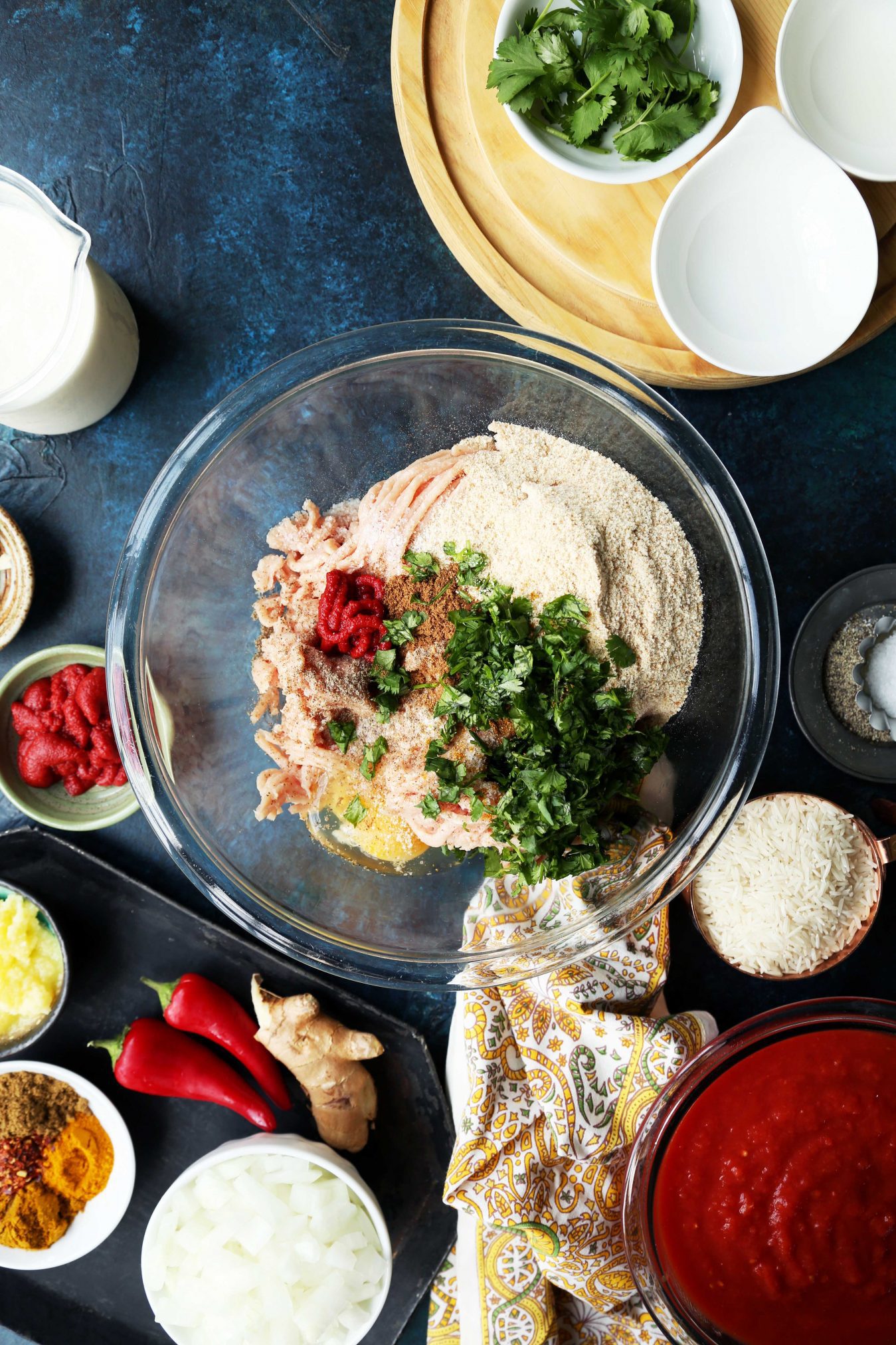 Shape the ground mixture into meatballs the size of a golf ball, or slightly smaller. Place on a baking sheet and continue shaping until all of the ground chicken mixture is used up. 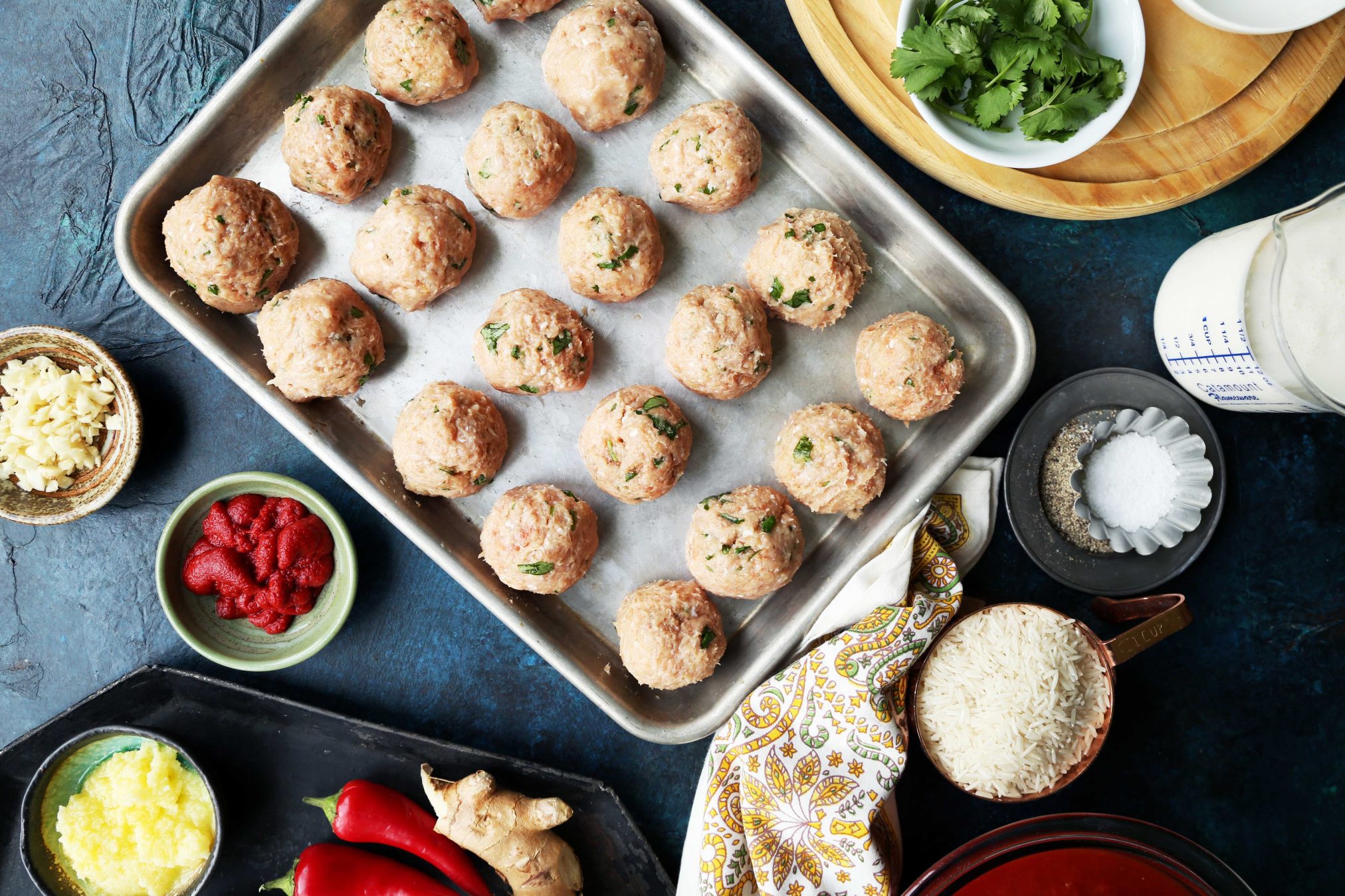 In a large skillet with high sides, melt some ghee. Then place in half of the meatballs, browning for about 8 minutes, flipping over the brown both sides. Transfer to a plate and then continue browning the rest.

**Note: Keep in mind that we’re not trying to fully cook the meatballs, but rather we’re just focusing on browning them for color and flavor. They’ll continue to cook later on in the sauce.** 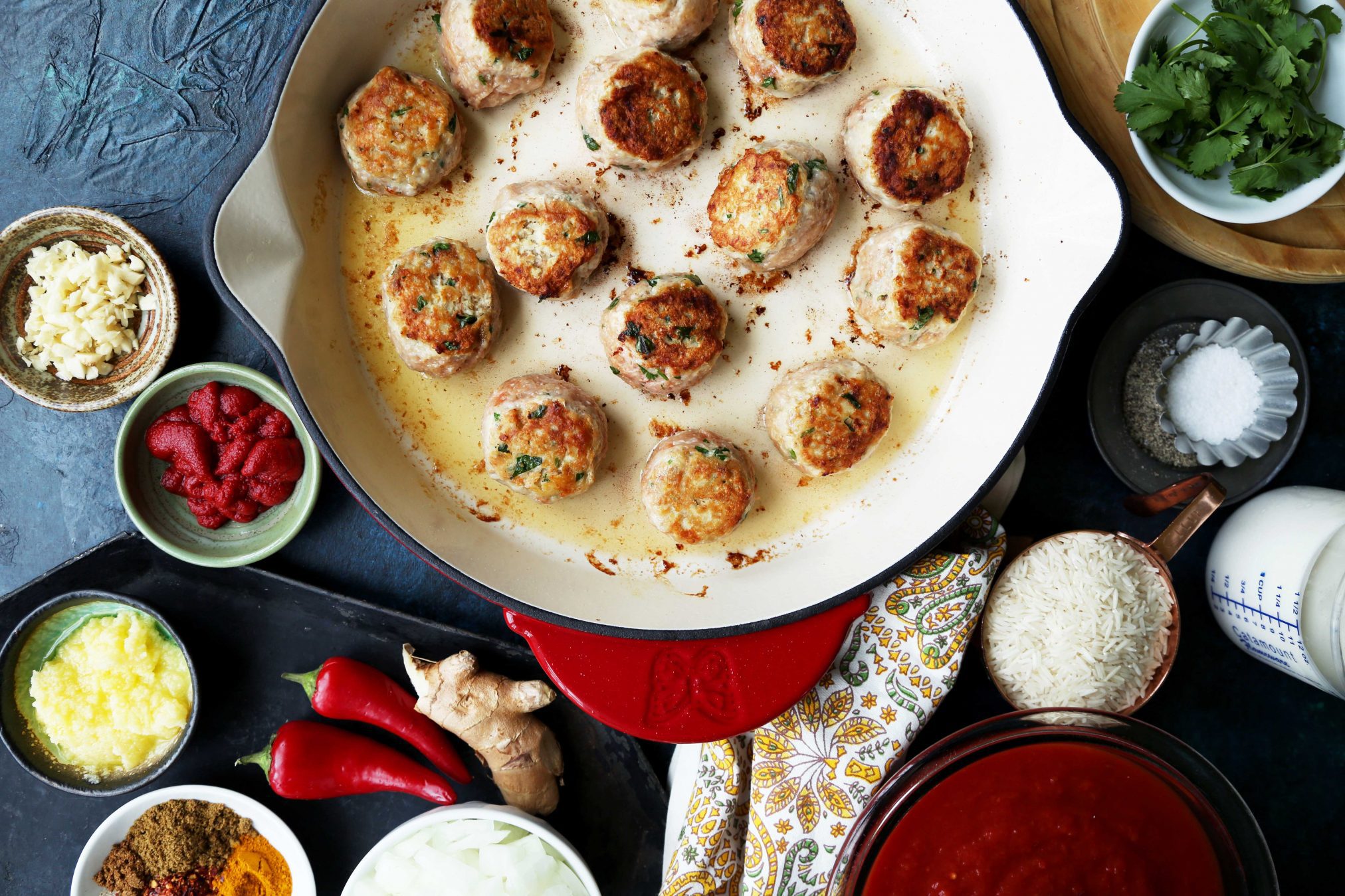 In the same skillet, melt some more ghee and then add in the onion, garlic and chili pepper. Cook until the onions have softened and just begun to brown. 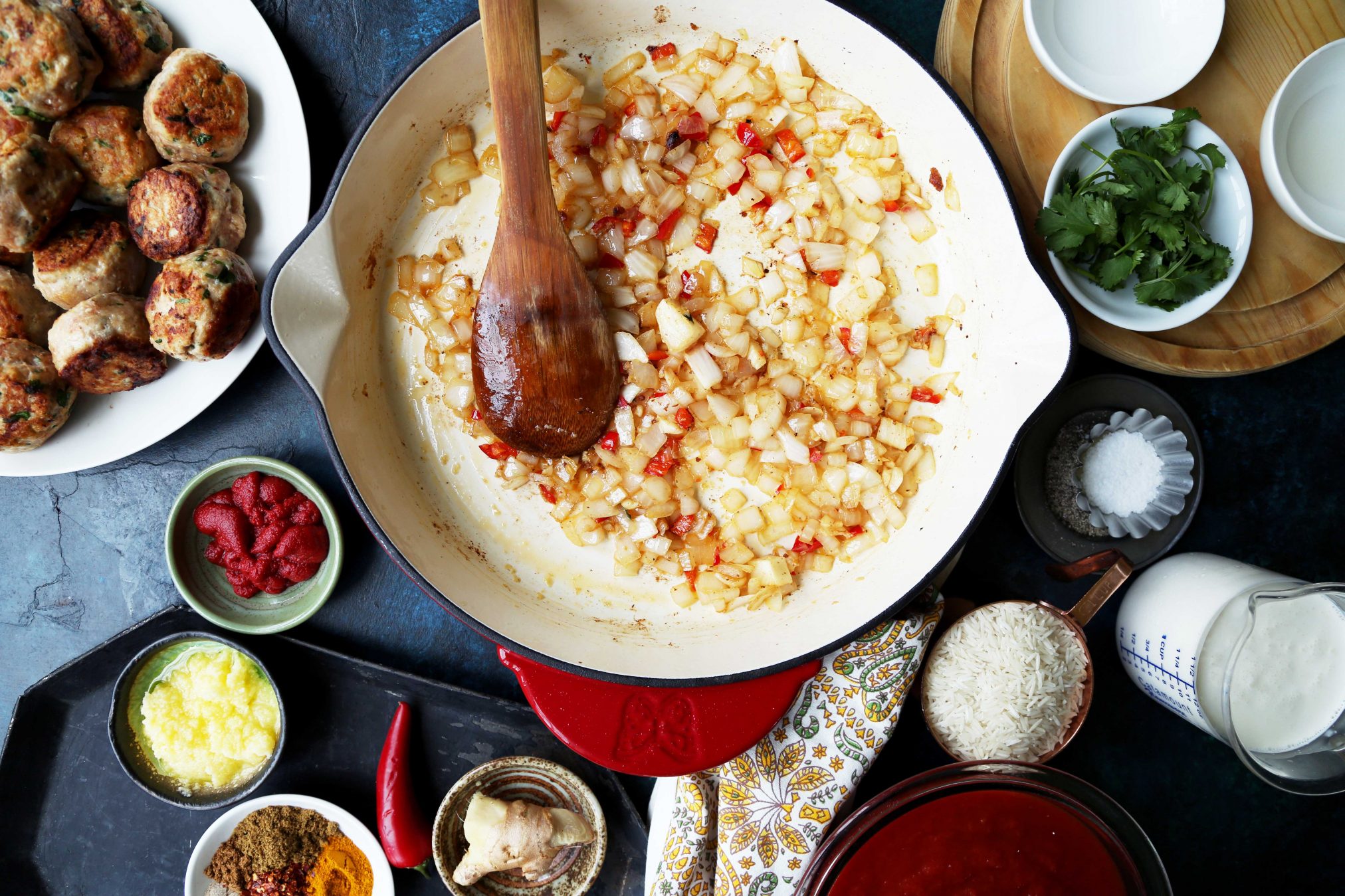 **Note: You want to cook the spices and tomato paste for a bit because the heat will develop most of their flavors as they toast and begin to brown.** 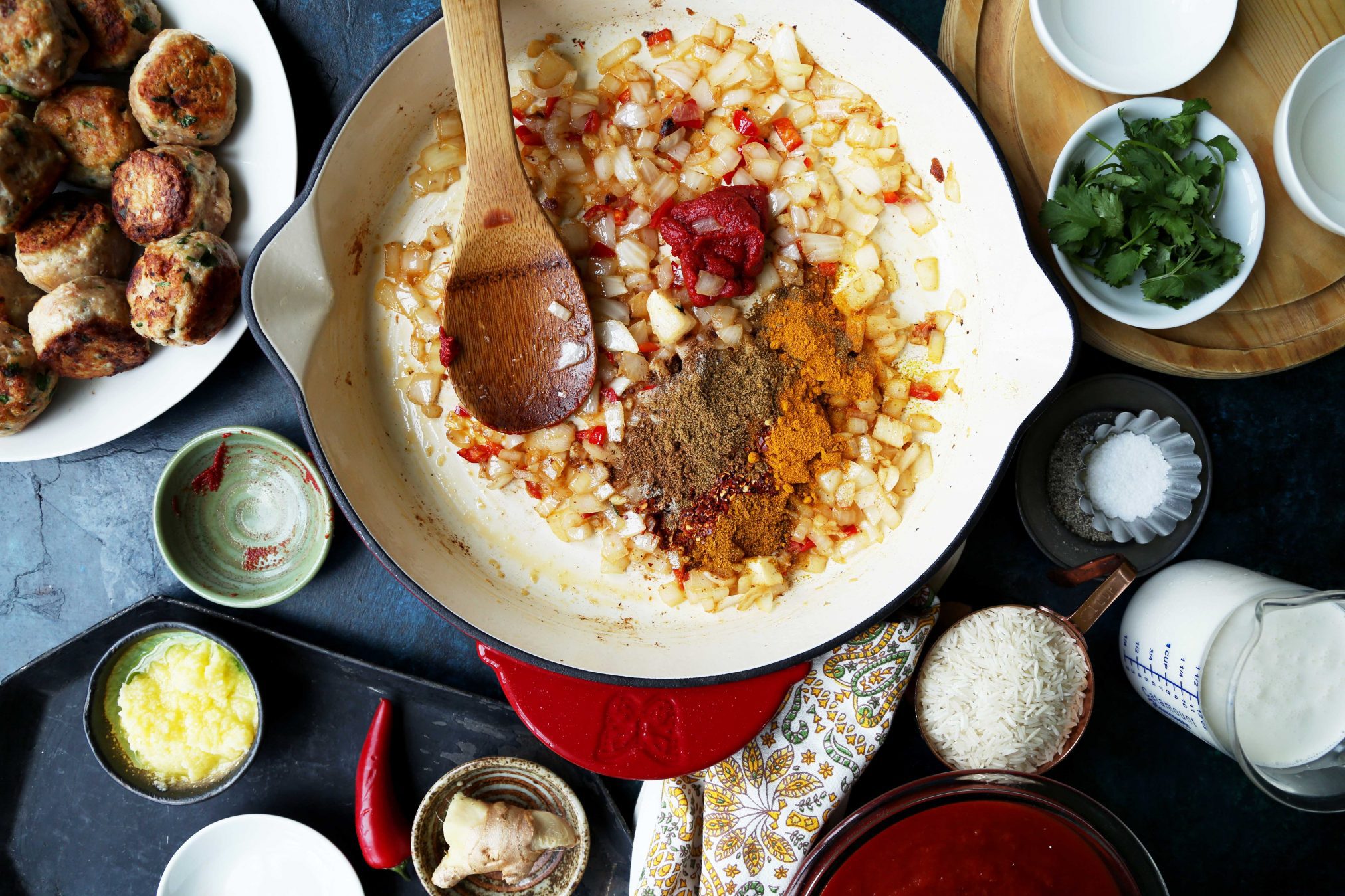 Stir in the canned crushed tomatoes. You can also use canned whole Roma tomatoes and squish them with your hands to help break them up. Bring the mixture up to a simmer over low heat. 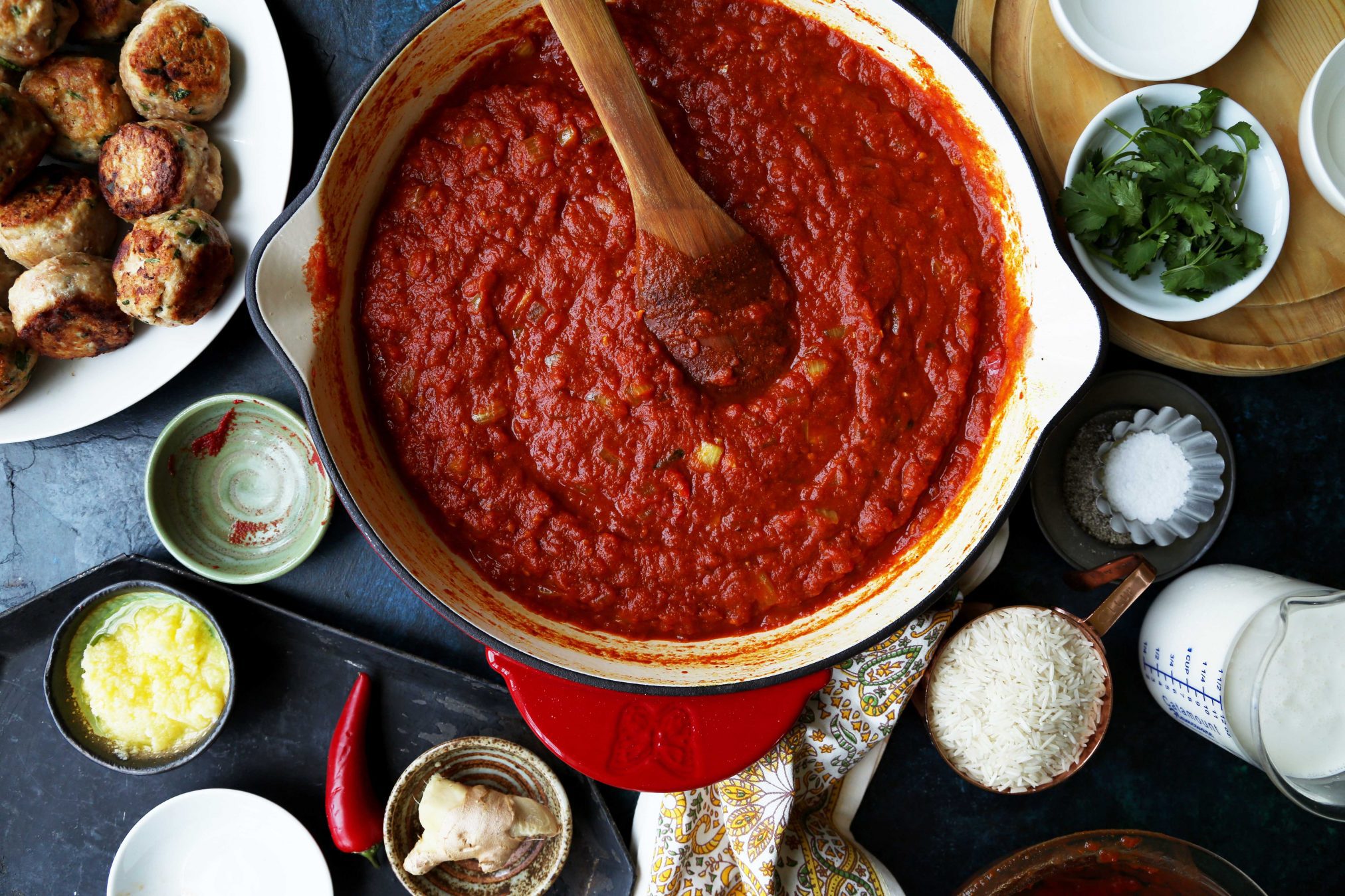 Slowly stir in the half and half and fresh chopped cilantro. Brink back up to a simmer. 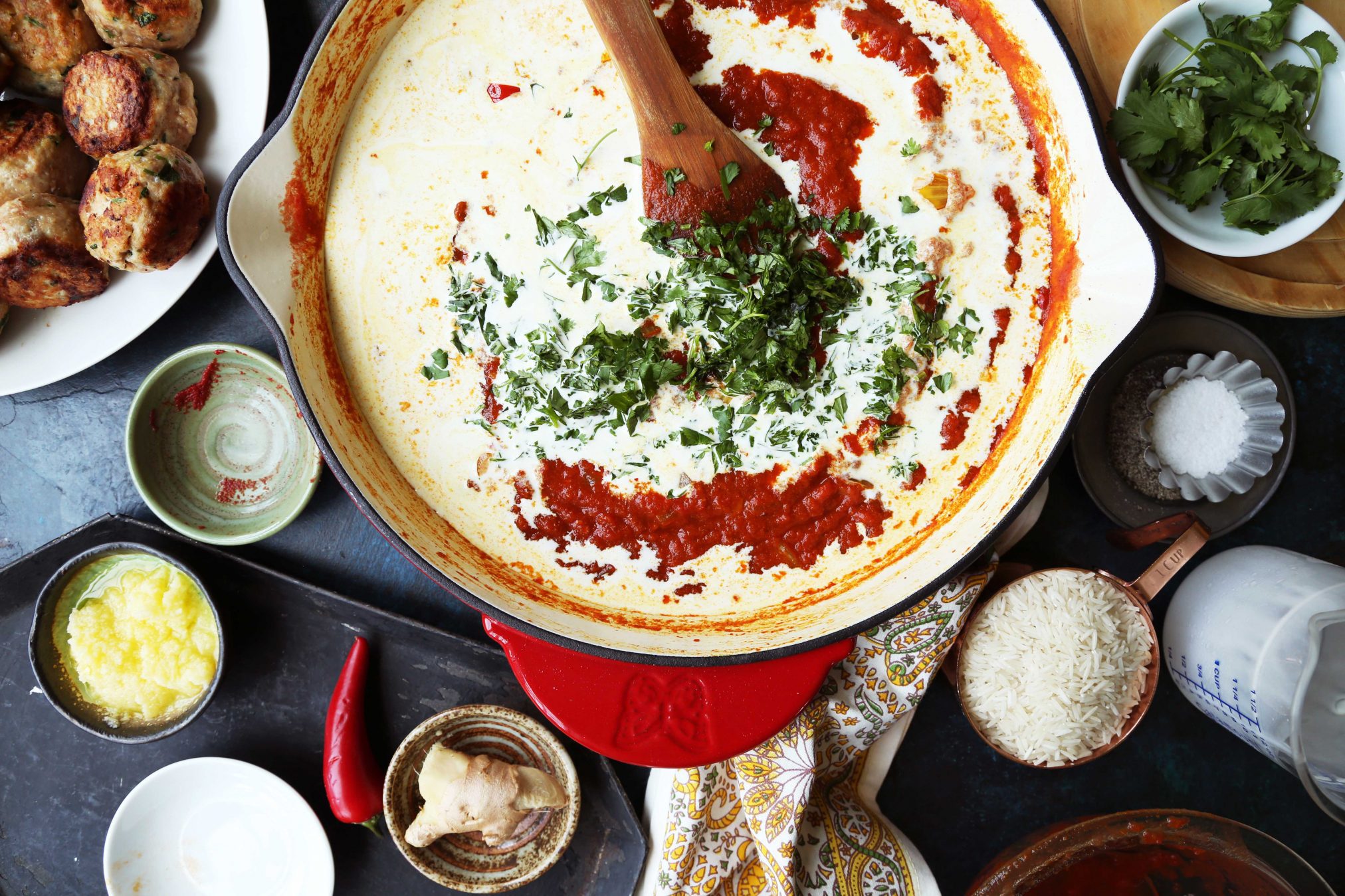 Place the meatballs back into the sauce, making sure they’re in the sauce in an even layer. Cover and cook until the sauce has slightly reduced, thickened and the meatballs have cooked through, about 30 minutes. 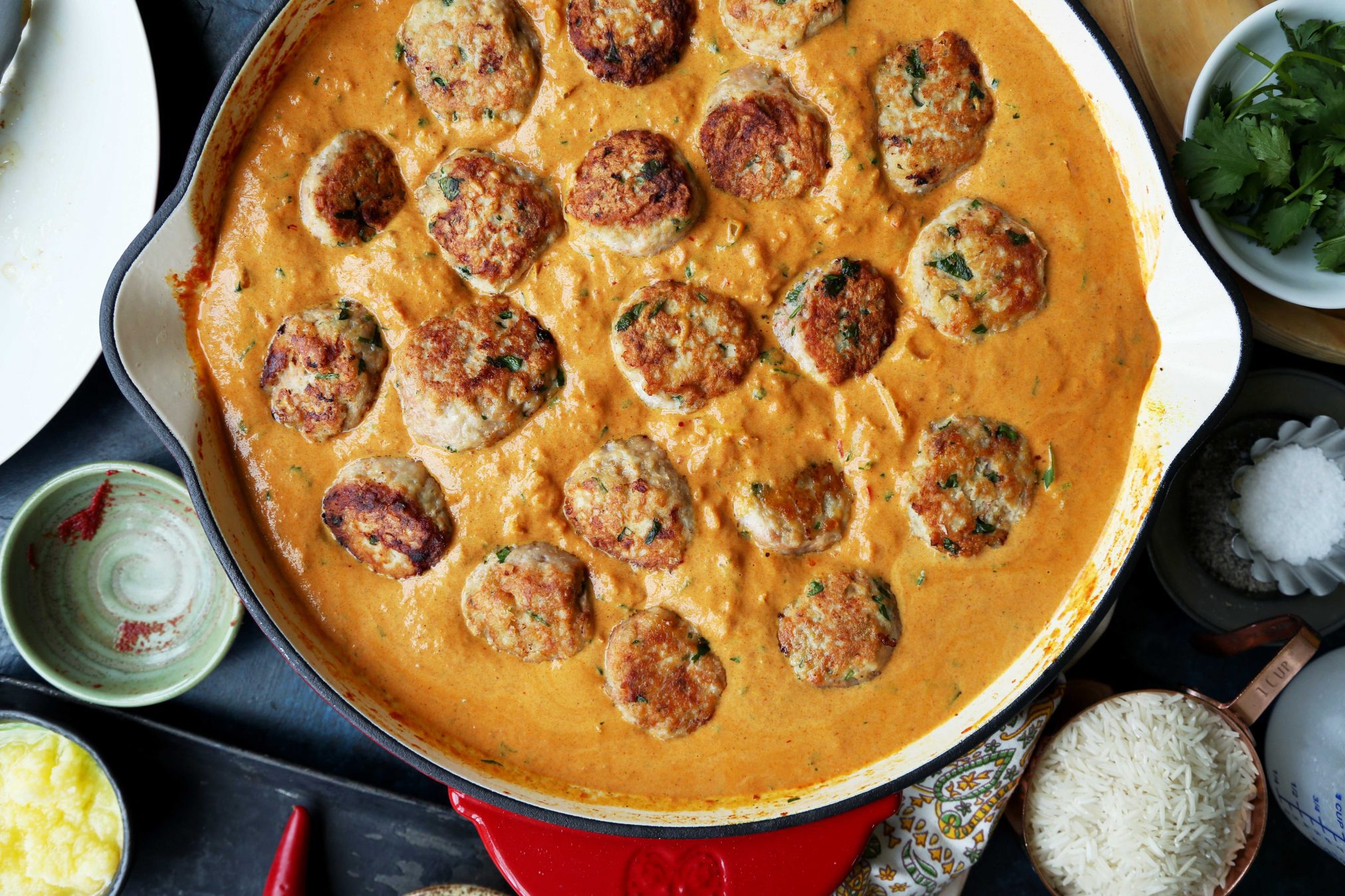 Make sure your skillet has a tight filling lid because that’ll create steam and help reduce the sauce and cook the meatballs through. 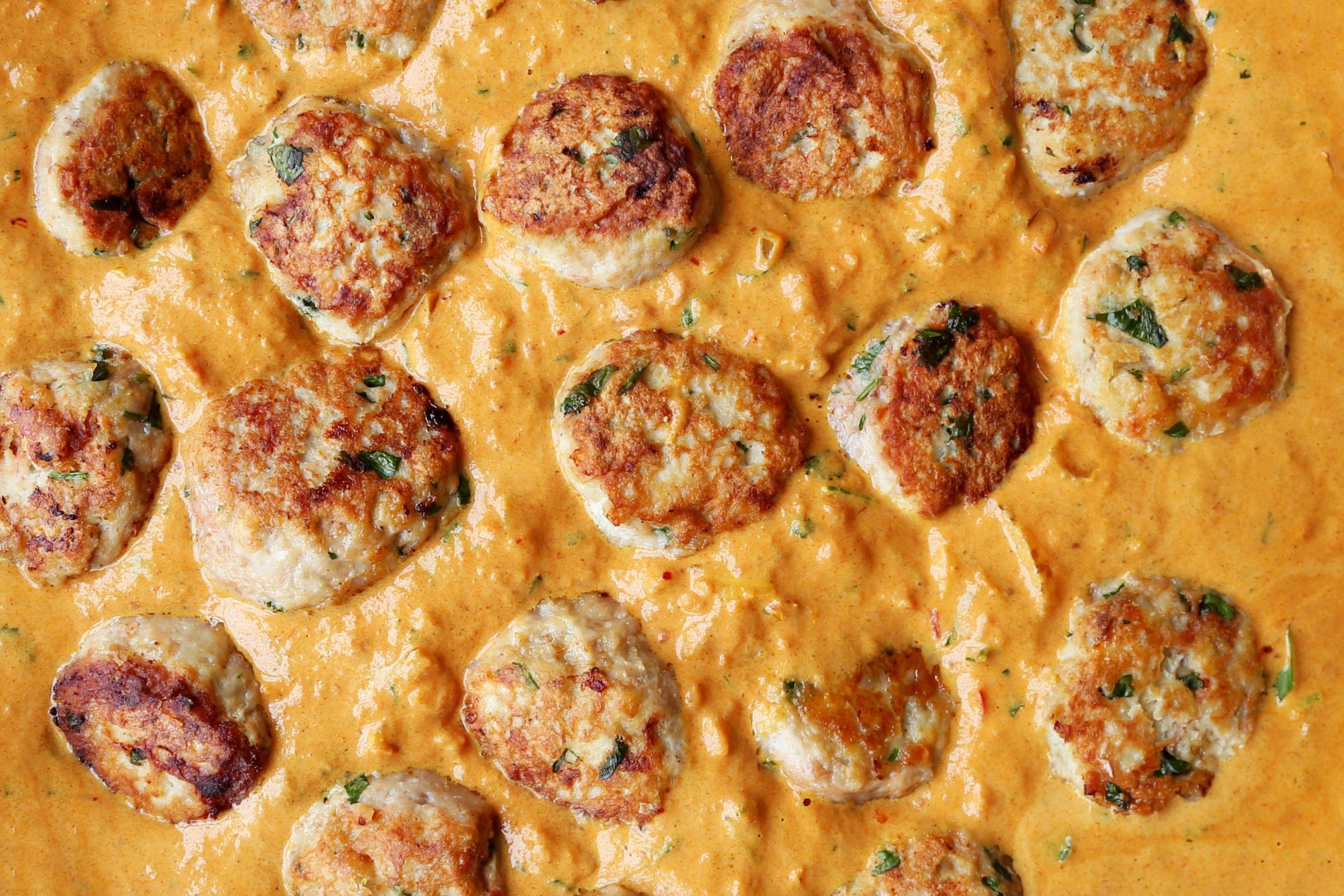 Make sure that you give the sauce and meatballs a gentle stir every one in a while during cooking so that the bottom of the skillet doesn’t burn. If you don’t stir it, the sauce or meatballs might stick to the  bottom, of the skillet and then flavor the rest of your tikka masala. 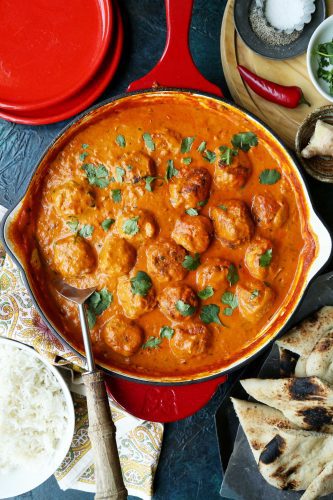 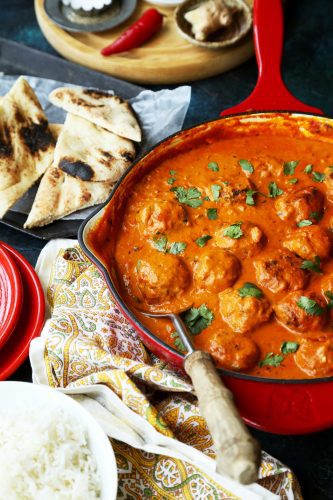 Once the meatballs are done, you can uncover the pan and sprinkle the top with a bit of fresh cilantro and call it a day. So the cilantro works double time in this recipe because it’s of course for a bit of flavor but also it adds a pop of color to an otherwise monotone color of a dish. 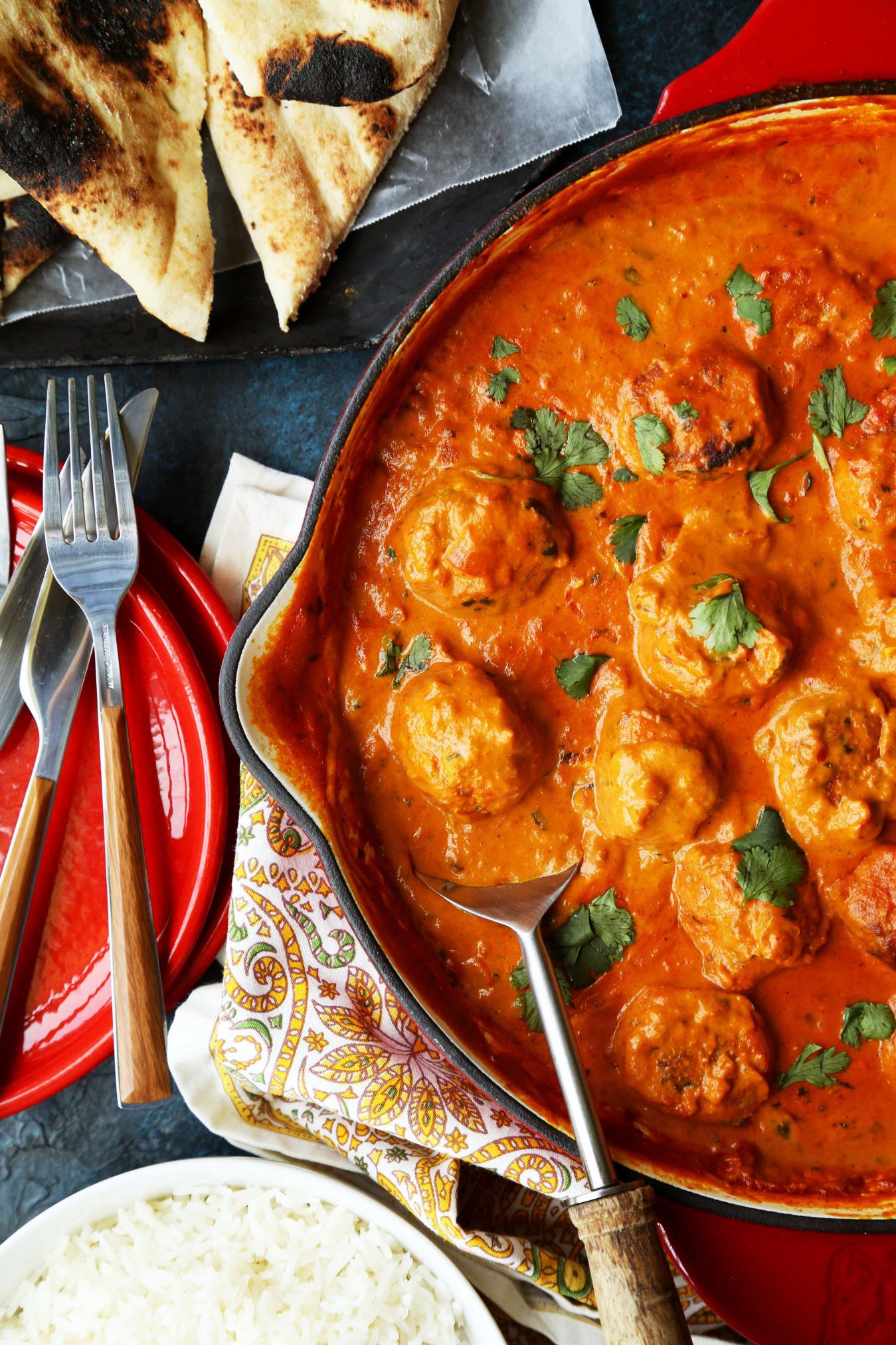 I like to serve these meatballs with soft fluffy basmati rice on the side and of course a bit of garlic naan on the side to help us mop up that delicious sauce. It’s a 100% must when you’re having tikka masala. 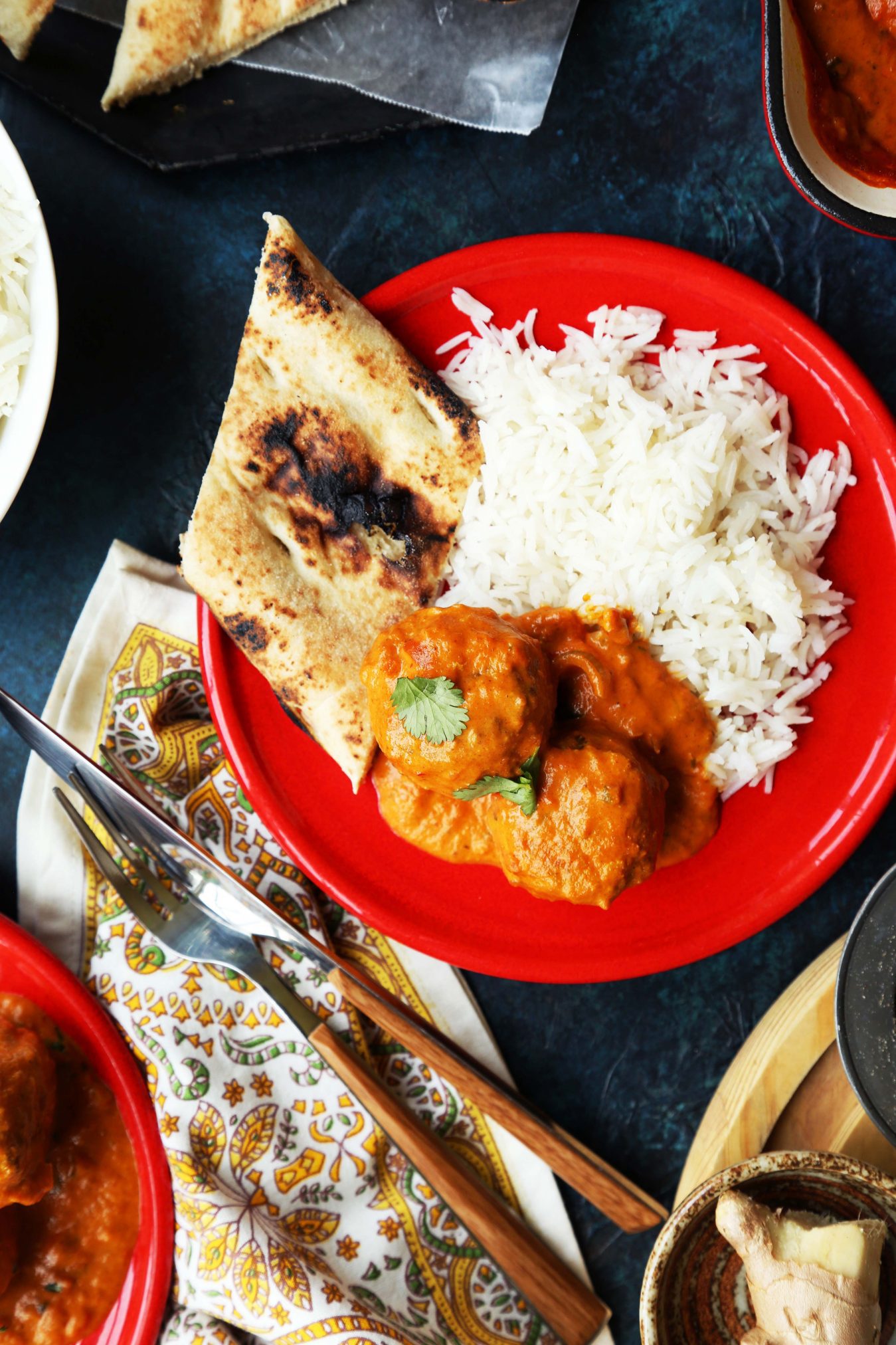 Make sure you earmark this recipe and give it a try as soon as possible. More so if you’re looking to eat more vegetarian friendly meals during the week when you’re busy at work and don’t have much time to put a home cooked meal on the table. It’s also great if you want to expand your horizons a bit. 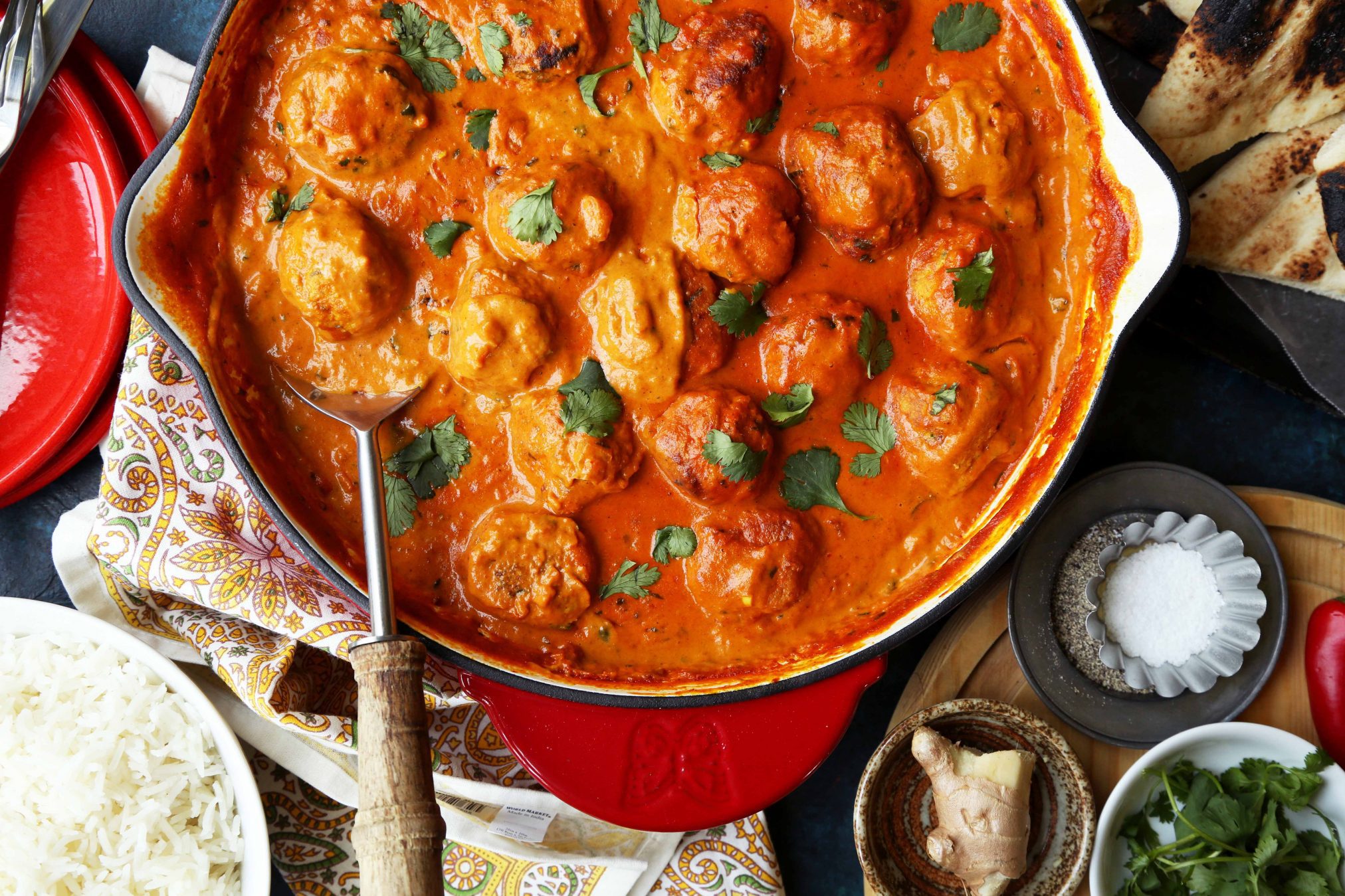 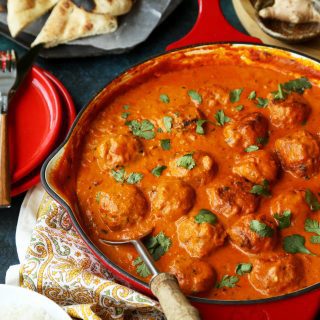