Home » Cheers To The Weekend » Cheers to the Weekend: Toasted Meringue Banana Pudding 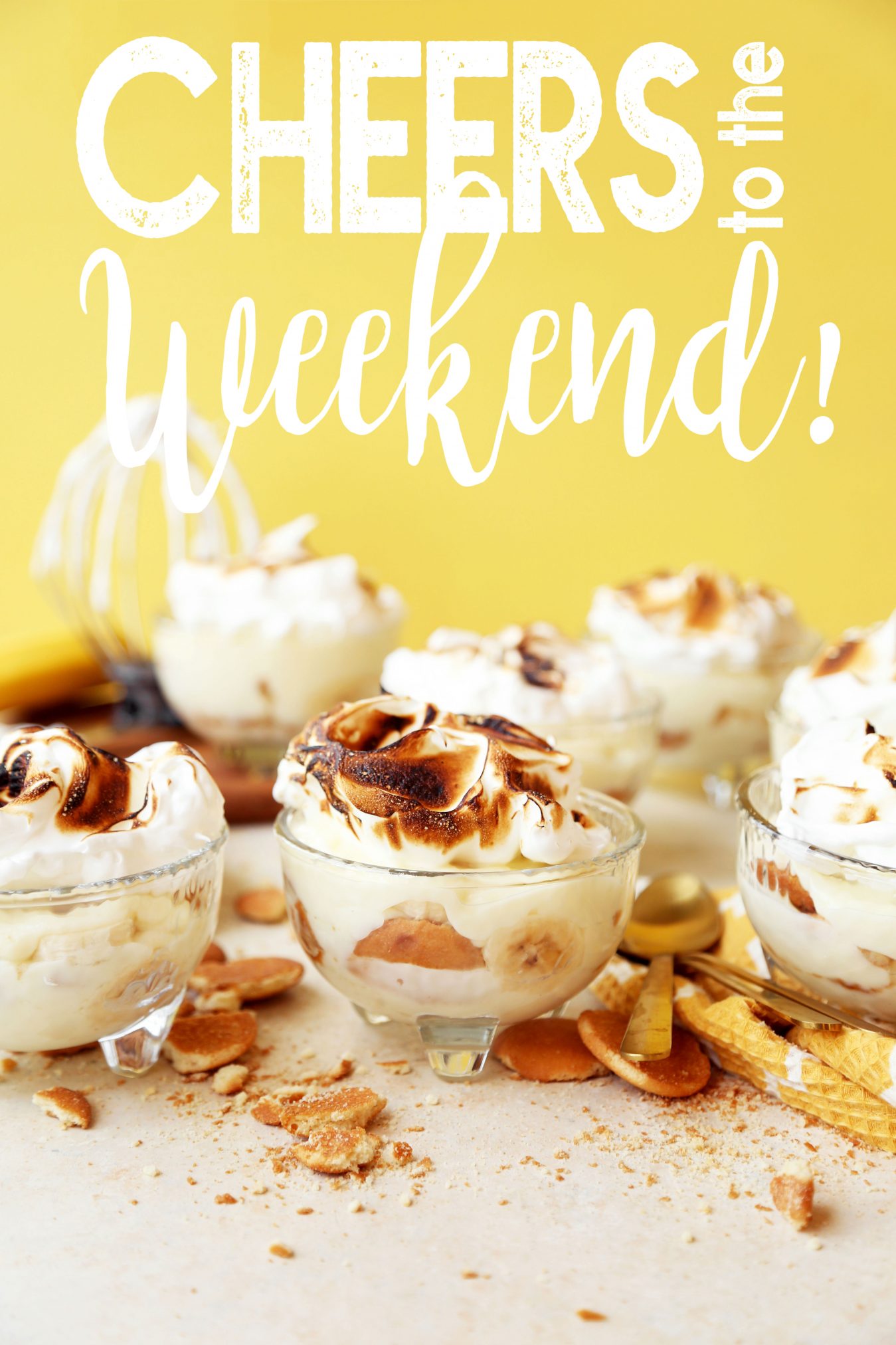 Banana pudding is one of those desserts that I will never tire of. It’s nostalgic, incredibly easy to make and yet it still manages to be a show-stopping dessert that takes people’s breath away (or at least mine). Over the years, I’ve shared a few banana pudding inspired recipes on the blog, and I hold each and every one of them close to my heart. There was that one time I turned it into ice cream and I’m still dreaming about it. How can we forget about this decadent Banana Pudding Cake? One of the most popular posts in the archives, from way back when I first started blogging, is this Bourbon Banana Pudding Cheesecake and I can easily say it’s a dream come true. Last but not least, there was that time I combined my love of banana pudding with rice pudding and the result was beautiful as it was delicious. Recently, when I was looking back at the banana pudding recipes on the blog, I realized I didn’t have a classic recipe. As some of you know by now though, I can’t always do simple and classic, so of course I decided to make a classic banana pudding but with a bit of a twist. This one is topped with homemade meringue that is toasted, giving it a marshmallowy/camp-fire taste to it that I think makes it perfect for summer. Let’s Cheers to the Weekend with a giant spoonful (or two) of this classic dessert. 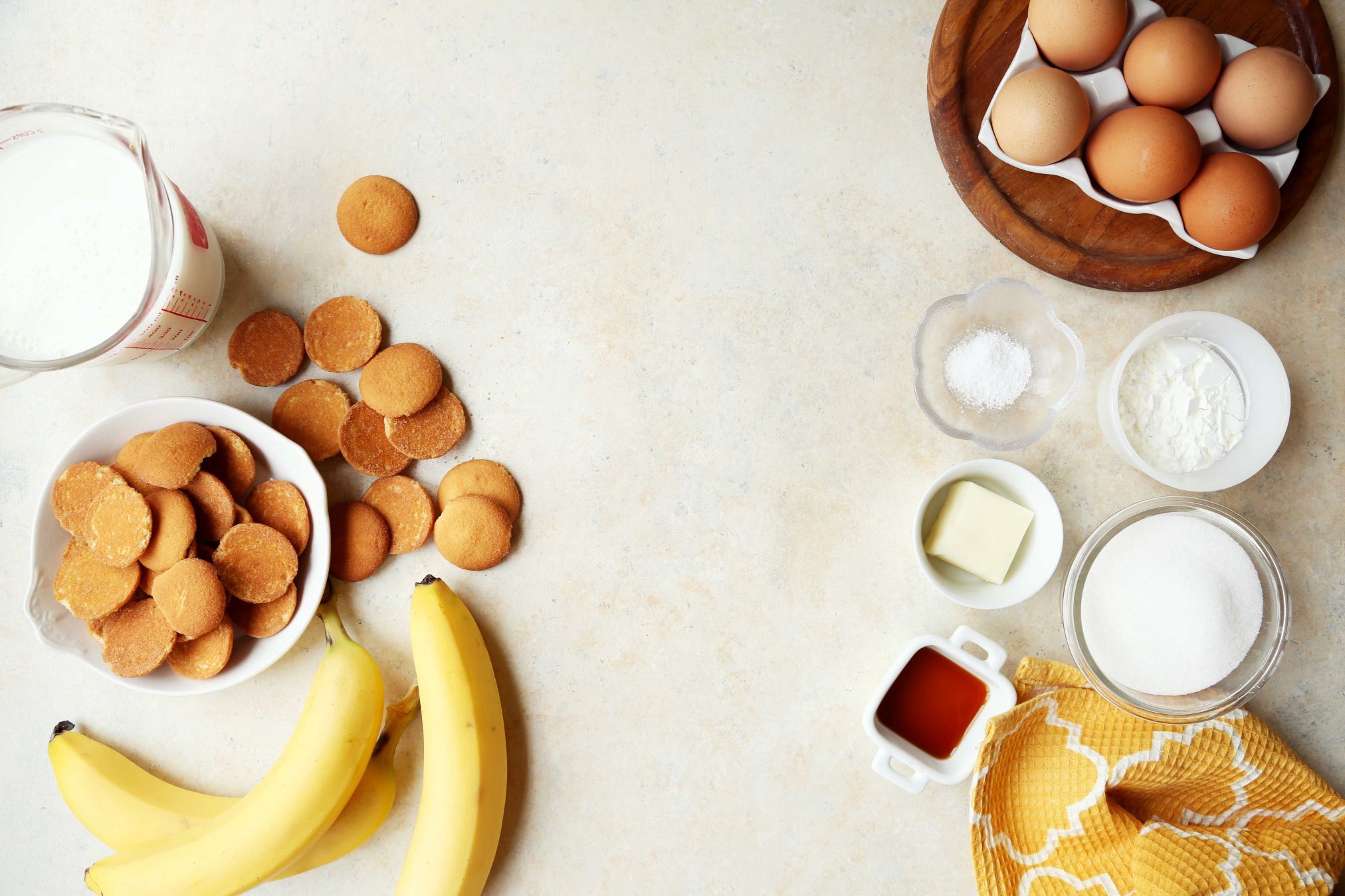 Let’s start by making the pudding. This is a basic vanilla pudding that I use for several recipes. It’s great for whenever you need custard for a dessert! In a saucepan whisk together the sugar, cornstarch and salt. 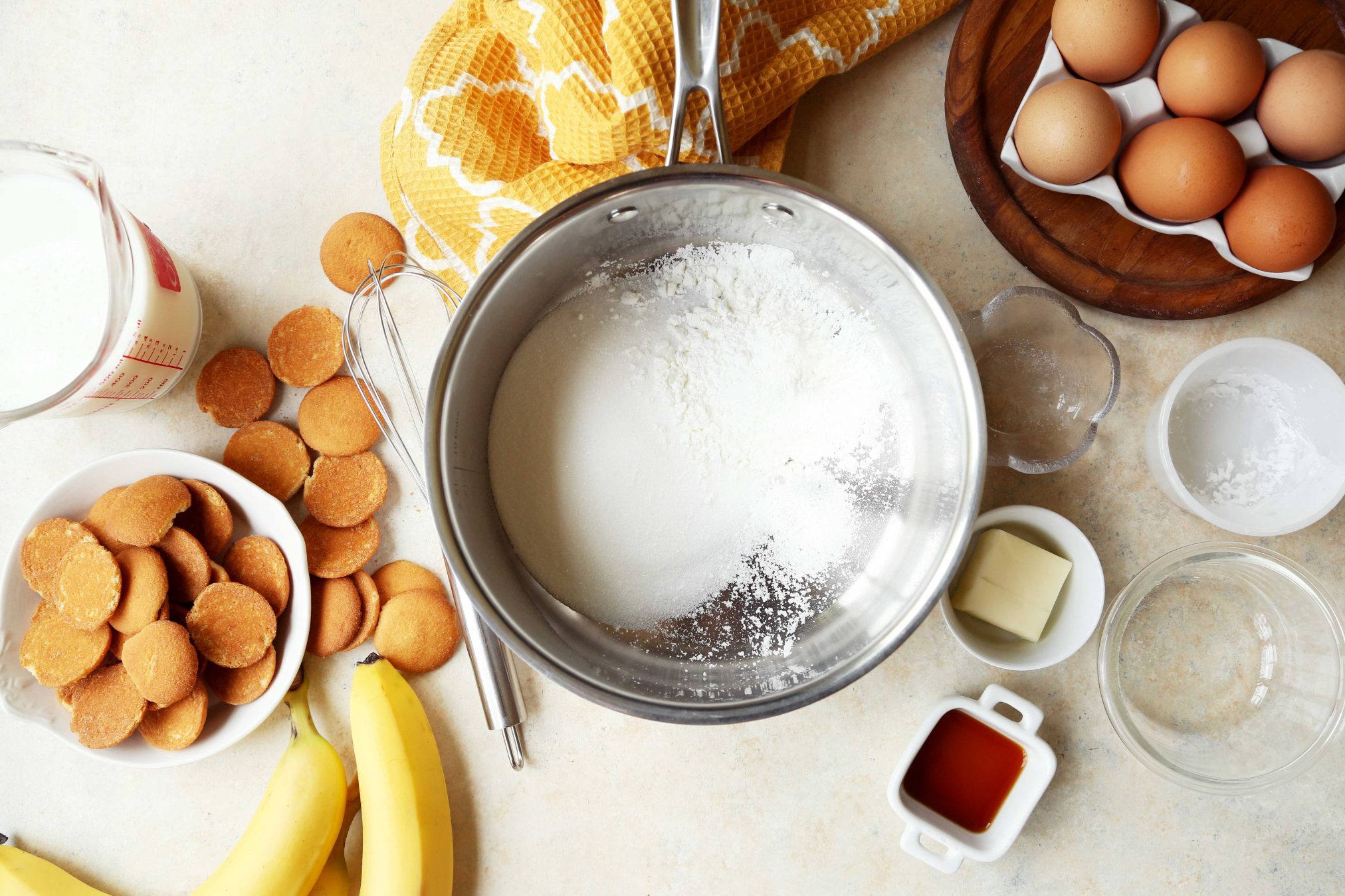 Slowly stream in the milk while whisking constantly until smooth and well combined. Then place over moderate heat and cook until just warmed through.

**Note: Keep a close eye on the milk because it’ll bubble over and make a mess in a flash if you don’t watch over it.** 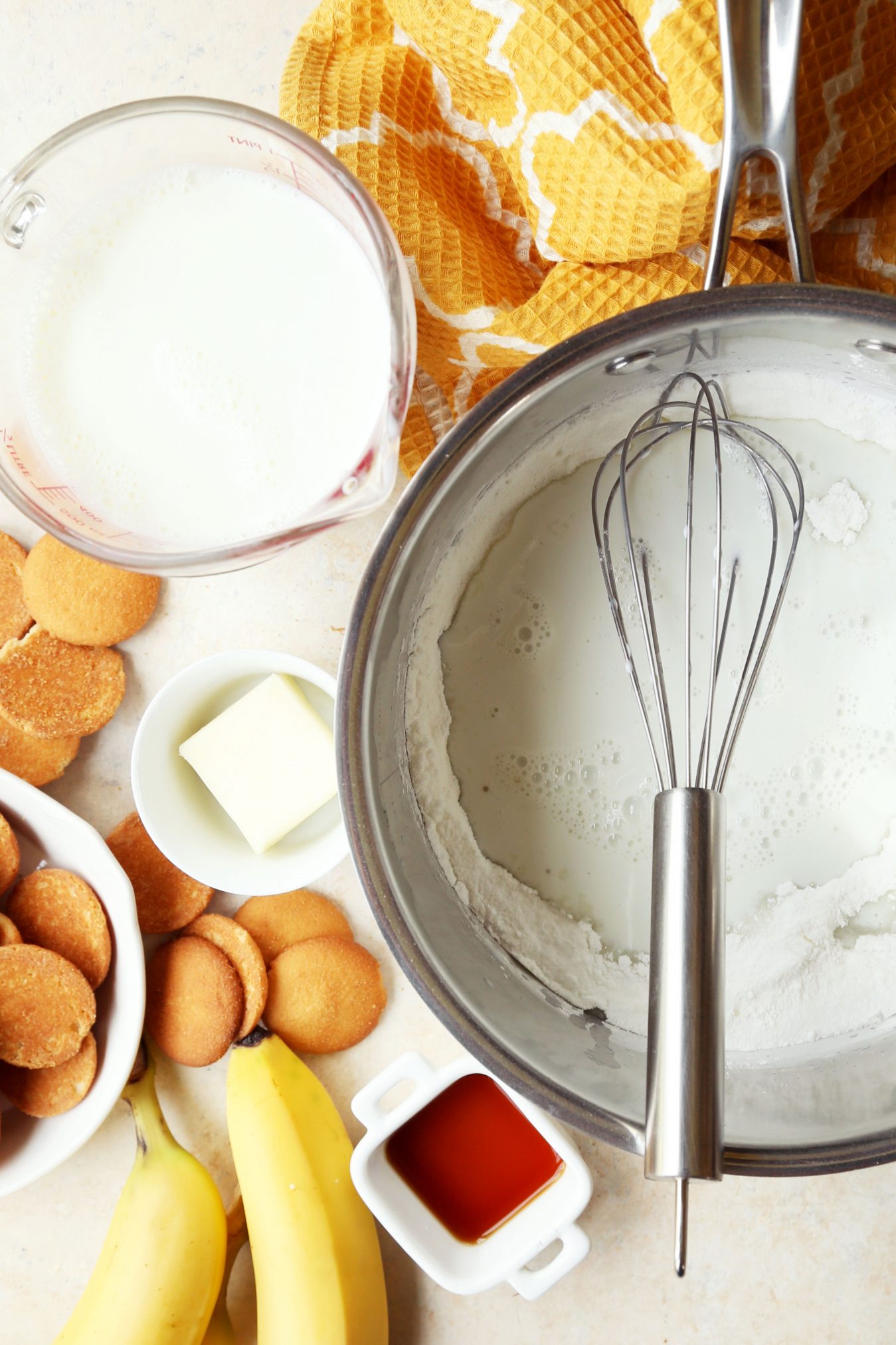 In a medium bowl, whisk the eggs until smooth. 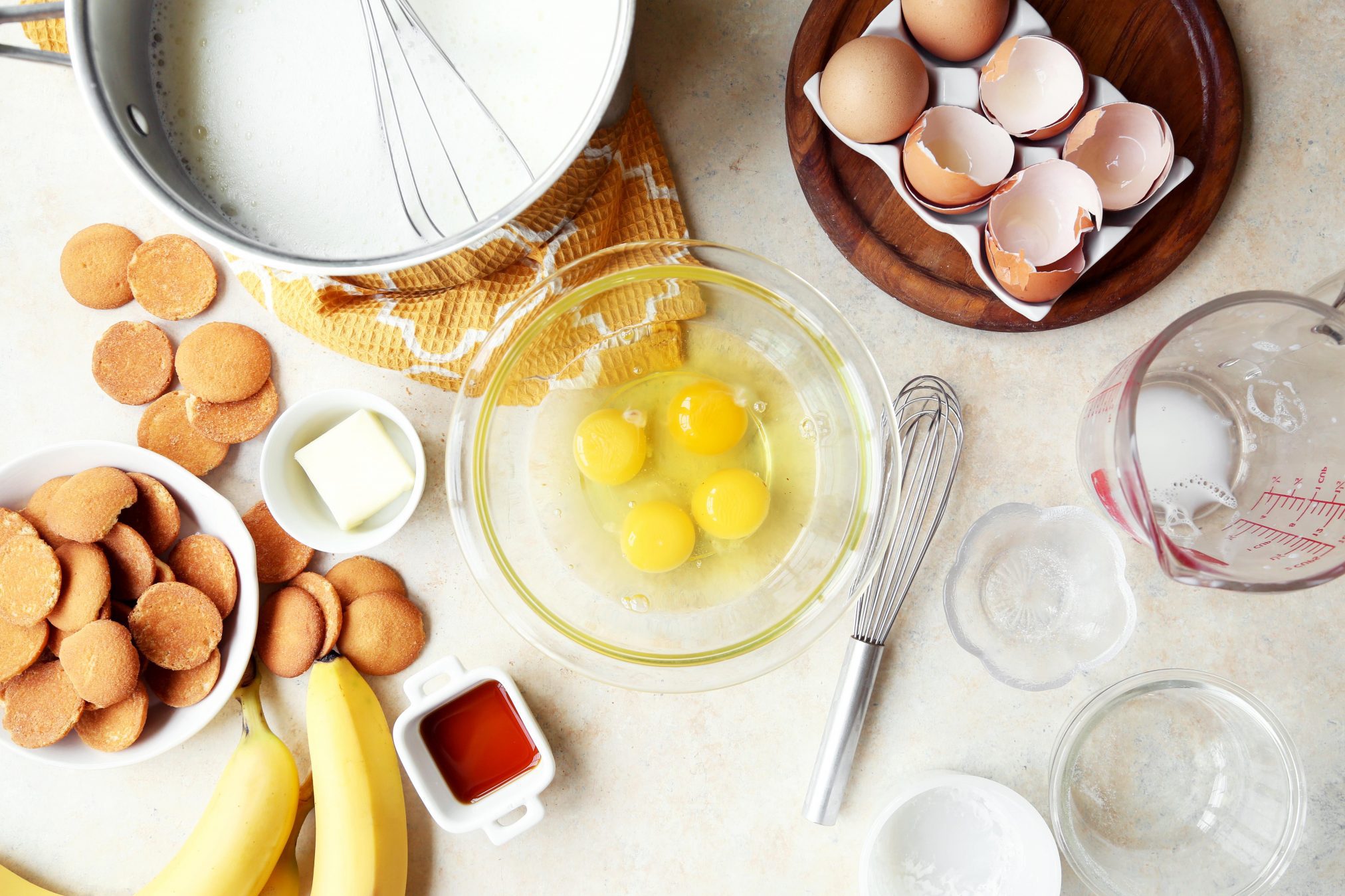 Temper the eggs by slowly whisking half of the warmed milk into them. Make sure to add the warm milk in a slow steady stream, all the while whisking so that the eggs don’t scramble.

**Note: If you add the eggs to the hot milk, or the milk to the eggs all at once, you’ll end up with scrambled eggs and that’s no good for any type of custard!** 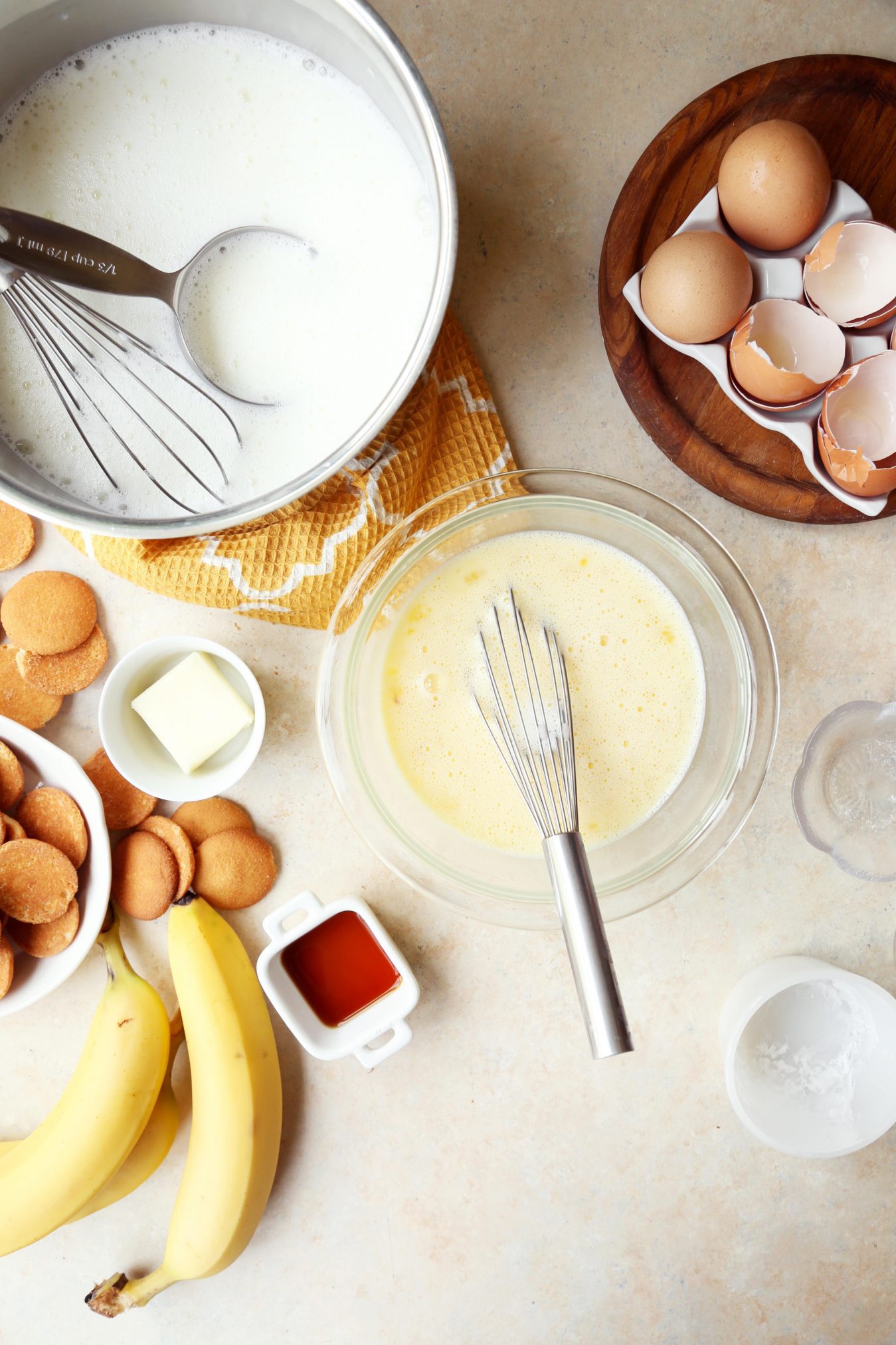 Pour the egg/milk mixture back in the saucepan and return the pan to moderate heat. Cook, whisking constantly, until the pudding begins to bubble and has thickened, about 8 to 10 minutes. 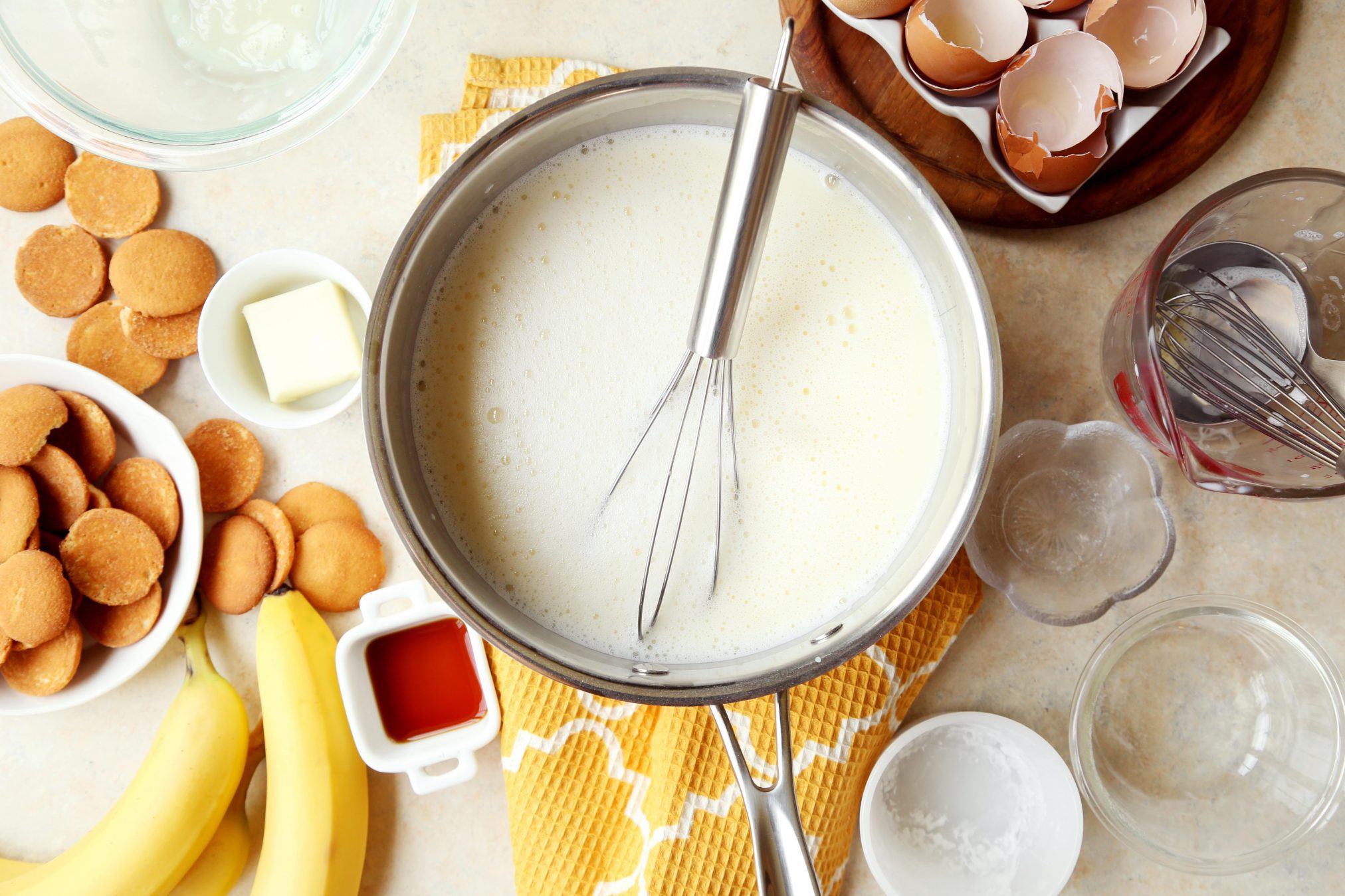 Remove the pudding from the heat and whisk in the butter and vanilla until melted through and well combined.

**Tip: I like to add the butter at the end because it just gives the pudding a nice rich taste and texture. I also add the vanilla at the end so that the flavor doesn’t just cook off while the pudding cooks.** 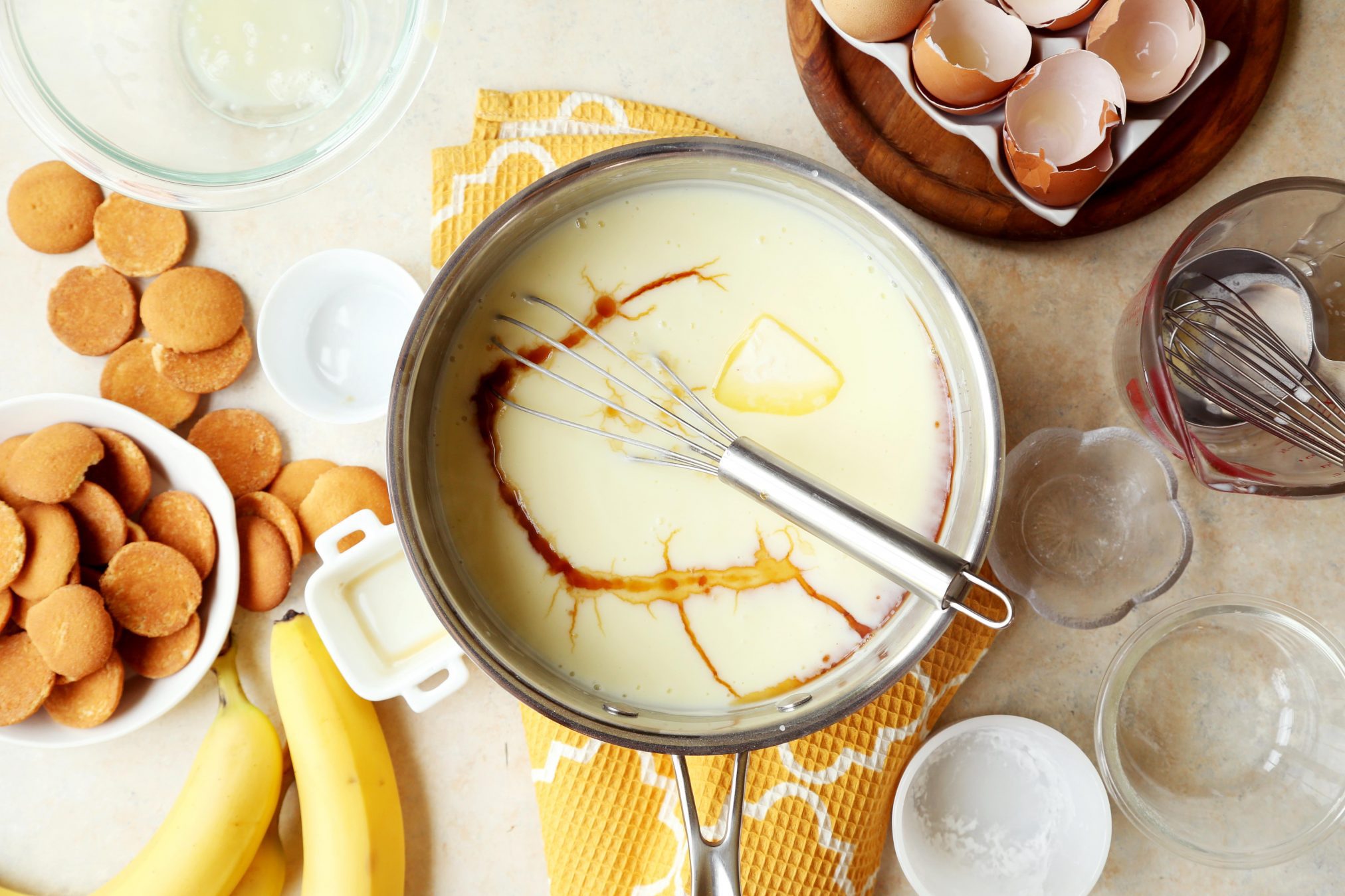 Pour the pudding into a large bowl, through a fine-mesh strainer to remove any lumps that might’ve formed. This is just a preventative measure because you want a very smooth custard. Cover with plastic wrap and chill for at least 2 hours, or overnight.

**Tip: I like to place the plastic wrap directly onto the surface of the pudding because this prevents a film or skin from forming. Then I cover the bowl tightly with a separate piece of plastic wrap.** 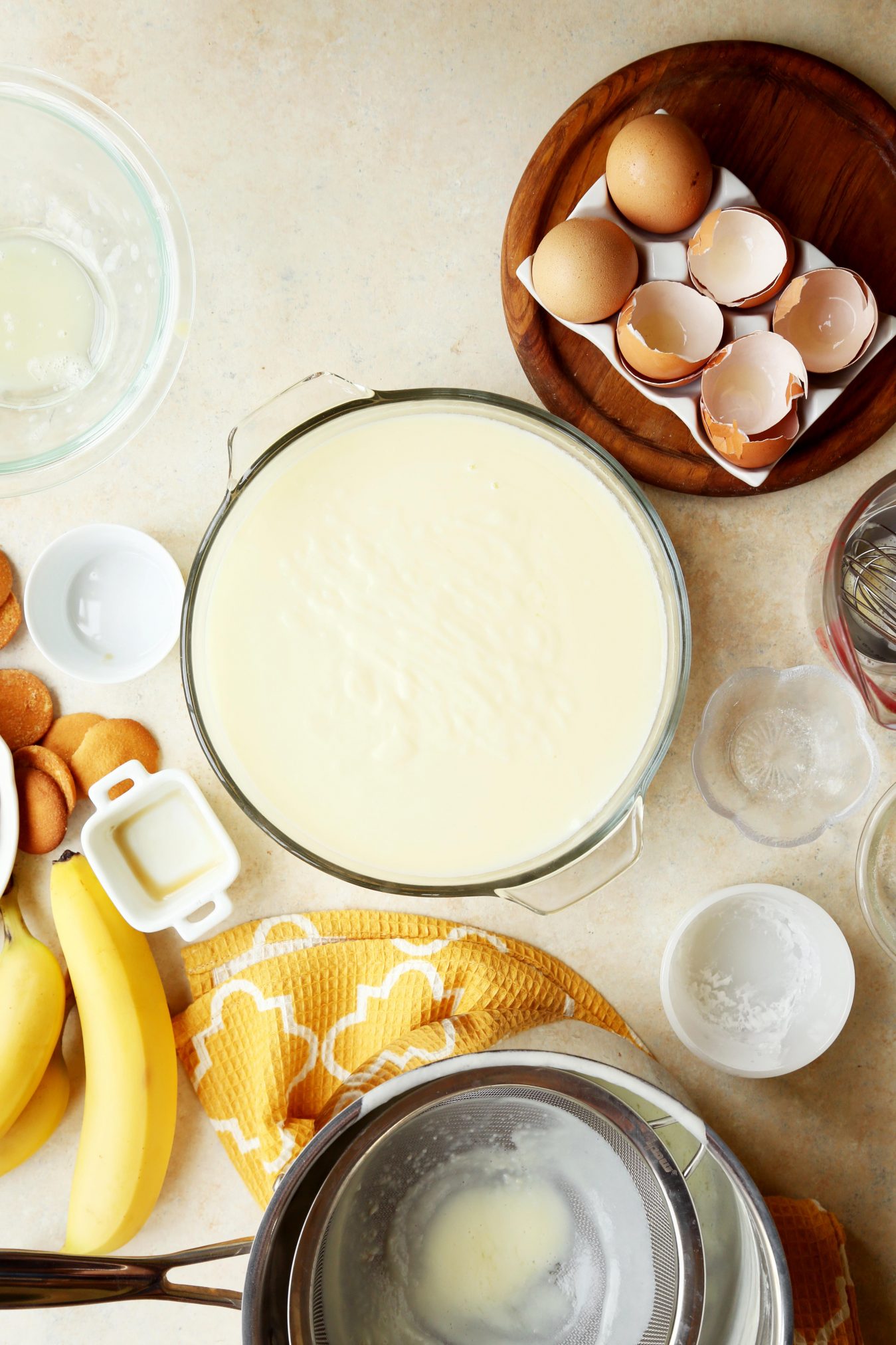 To assemble the pudding start by placing a bit of the chilled custard at the bottom of your dishes. Then top with some crushed up vanilla wafer cookies and a few banana slices. Repeat with more custard and more cookies and bananas and so on and so forth until all of the ingredients have been used. You want your last layer to be pudding, so keep that in mind. Cover the pudding with plastic wrap and chill for at least 1 hour.

**Note: This chilling time allows the pudding to set and the cookies to soften a bit, which is my favorite part of any banana pudding!** 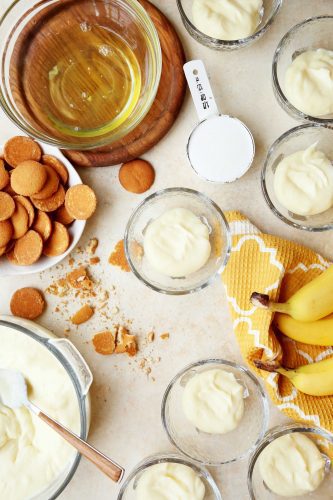 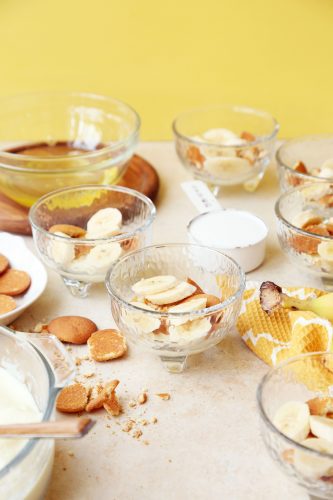 To make the meringue, combine the egg whites, salt and cream of tarter in a very clean bowl of a stand mixer. Beat on medium speed until frothy and just beginning to double in size. Then slowly stream in the sugar as the egg whites are begin beaten. Increase the speed to high and continue to whisk until glossy and stiff peaks form.

**Tip: Whenever you beat egg whites, it’s crucial to make sure the bowl and whisk are completely clean and completely dry. You also want to make sure no yolk bits whatsoever are present in the whites, as these factors could prevent your whites from being beaten properly.** 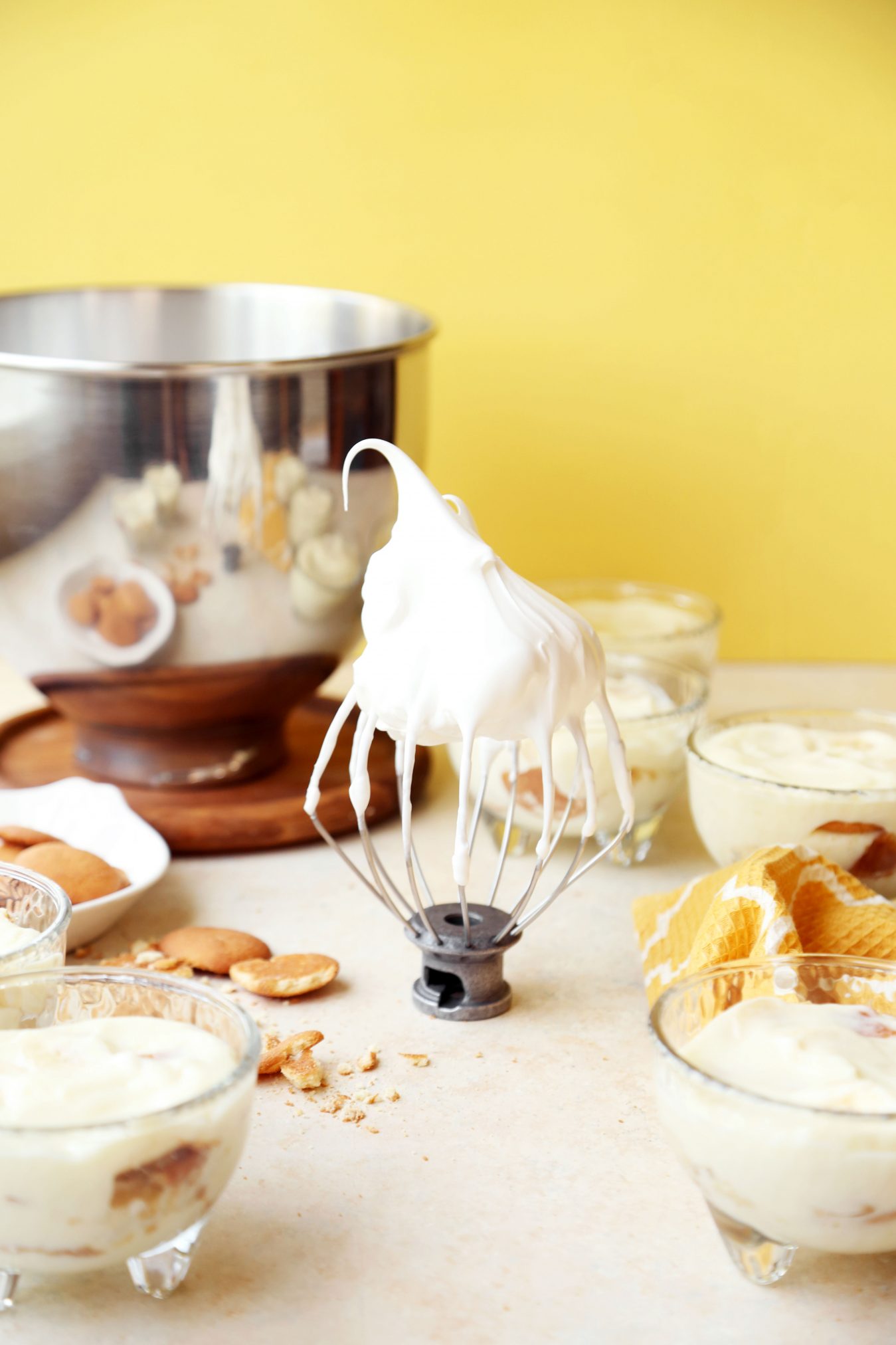 Top the pudding with the meringue and then make some swirls with a small spatula or the back of the spoon. This helps both in presentation and with the toasting part. 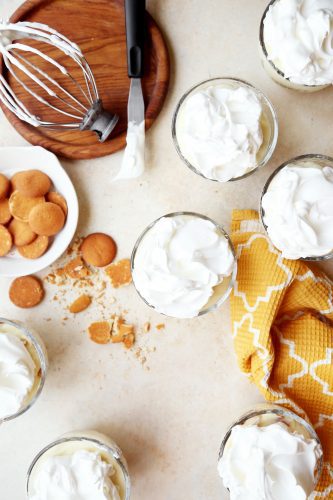 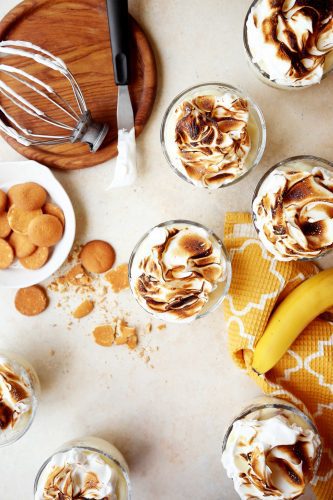 Using a small kitchen torch, toast the meringue as much or as little as you like. I love when bits of meringue are almost on the brink of burning. It reminds me of burnt marshmallows.

**Tip: Speaking of which, if you don’t want to make meringue then you can top with jumbo marshmallows and toast those or you can make fresh whipped cream and top it with that (without torching it) and you’ll have a classic banana pudding.** 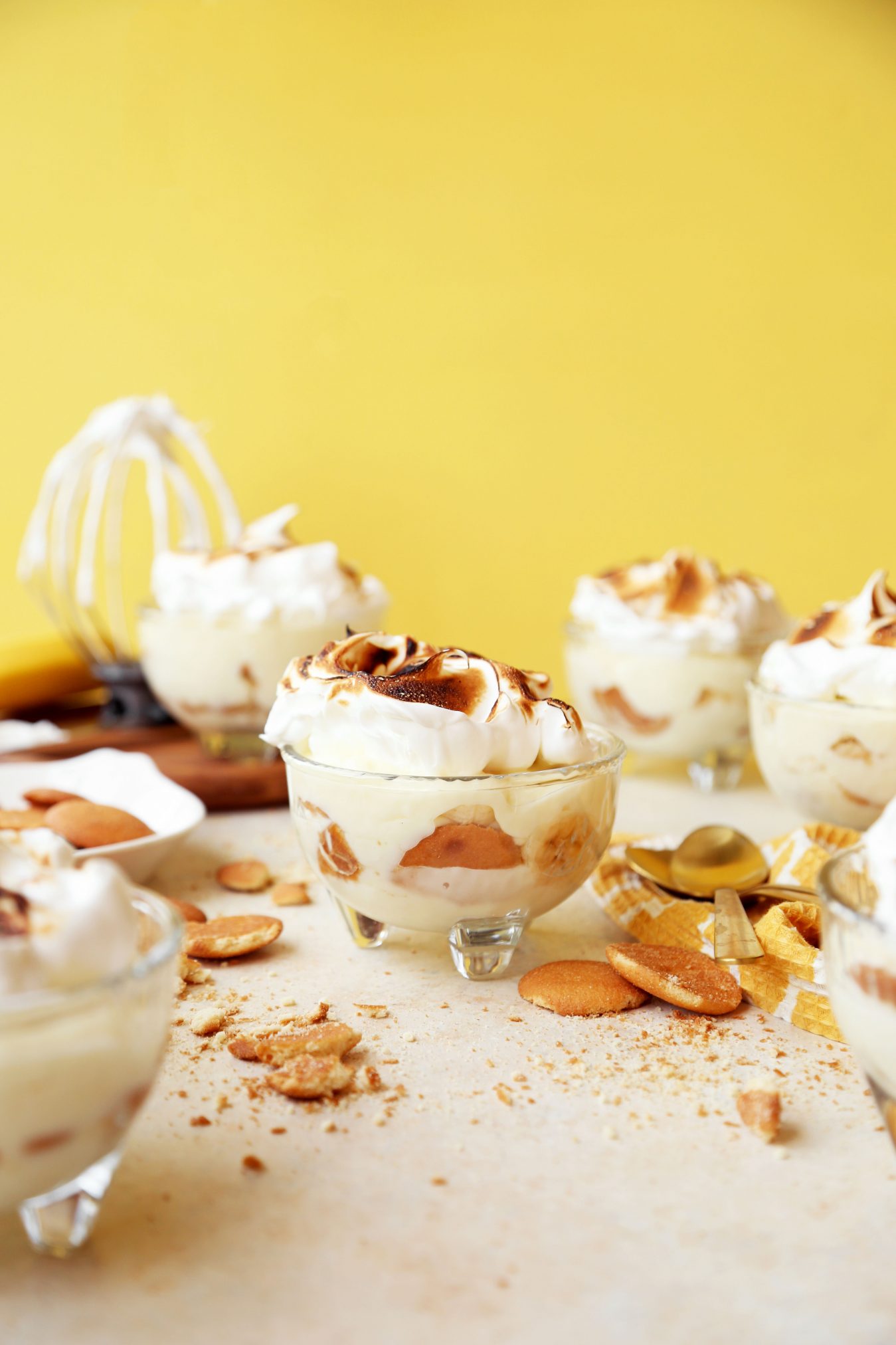 I love having a kitchen torch specifically for this reason and so I highly recommend to get one if you don’t have one already. You don’t have to break the bank though, this one from Amazon is great! Don’t forget to purchase the butane gas separately. 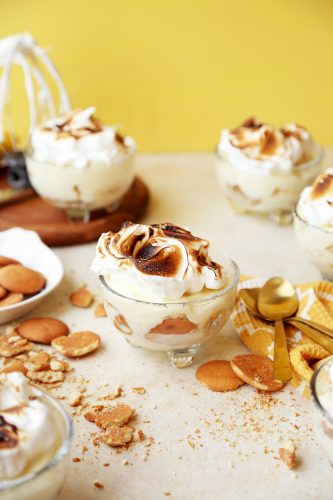 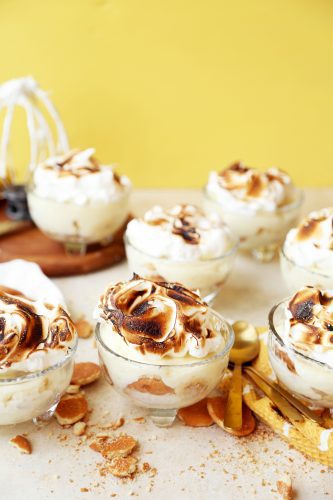 You can make this pudding as individual servings or in one large dish. I like taking the individual route as it’s a lot easier to serve and a lot cleaner looking, but it’s completely up to you! Either way the pudding will be delicious. 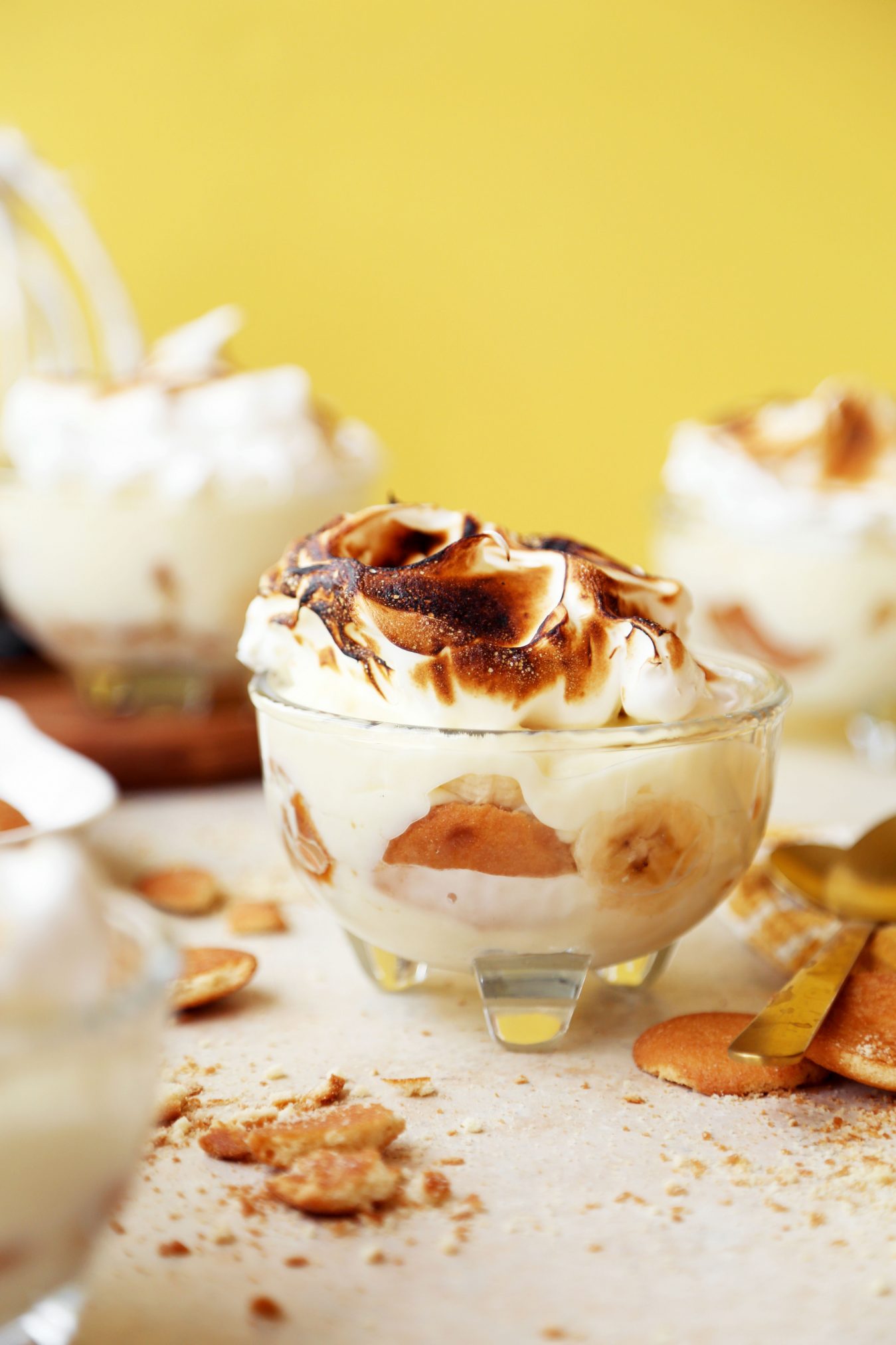 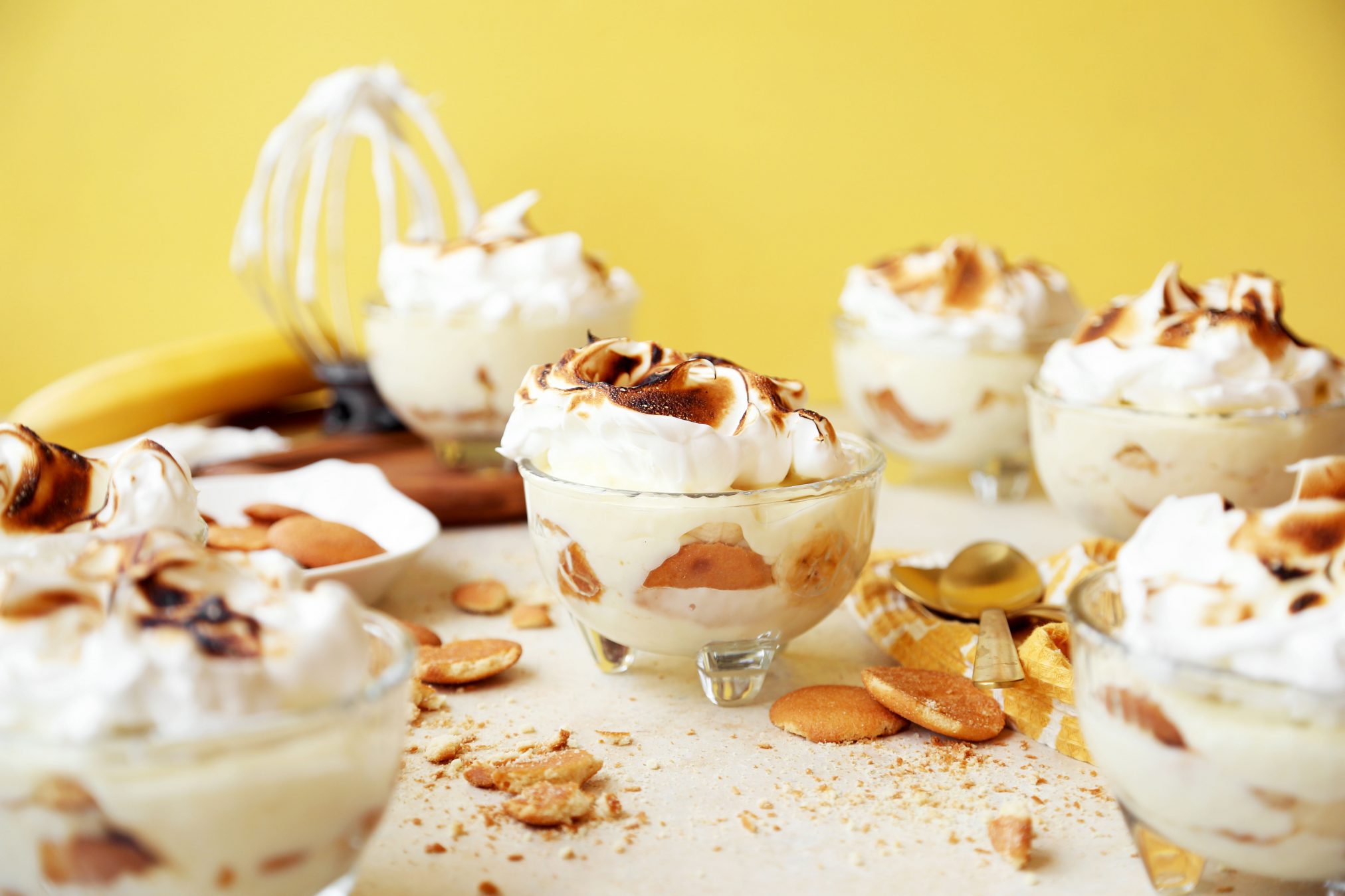 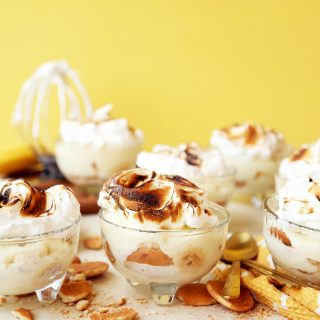