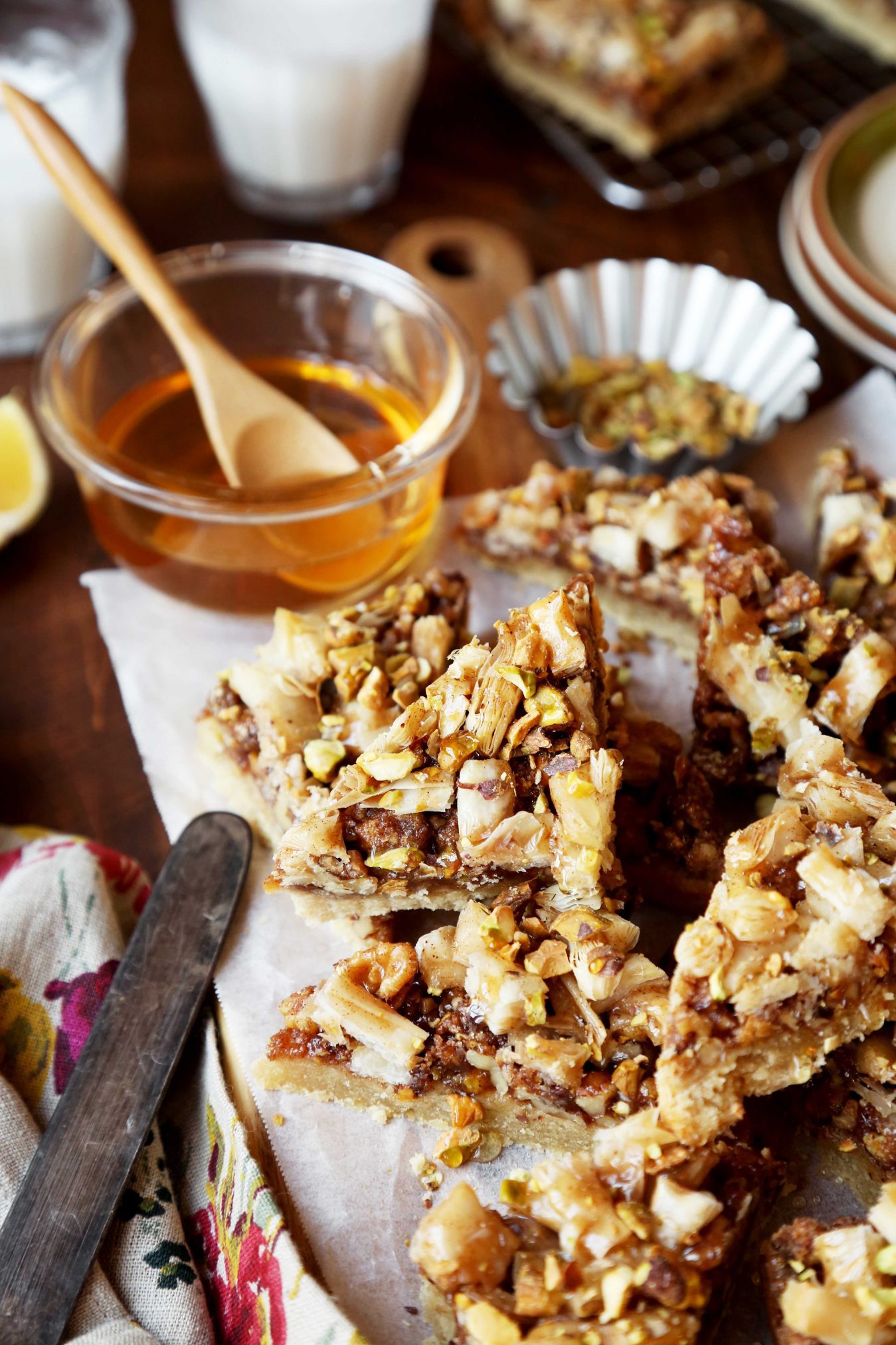 These Baklava Shortbread Cookie Bars are a great alternative for those of you (aka me) who need a holiday treat, without all the hard work or any of the effort. Traditional baklava is a Middle Eastern dessert that is typically made by layering a bunch of phyllo sheets together with butter, chopped nuts and sugar and then sweetened with syrup or honey. It’s nutty, flaky, sweet and insanely delicious. It also happens to be a pretty labor intensive dessert, and while all the hard work does payoff, you sometimes just don’t have the time or the patience to pull it off. So in honor of that holiday laziness that is sure to hit us around this time of year (I’m already feeling it) I’m sharing another super easy holiday “cookie” recipe on the blog. These bars taste like baklava and are 100 times easier to make than the traditional variety. Be sure to give it a try this week, or next week, and hand it out as gifts to all the adventurous eaters in your life. They’ll be so thankful you did. 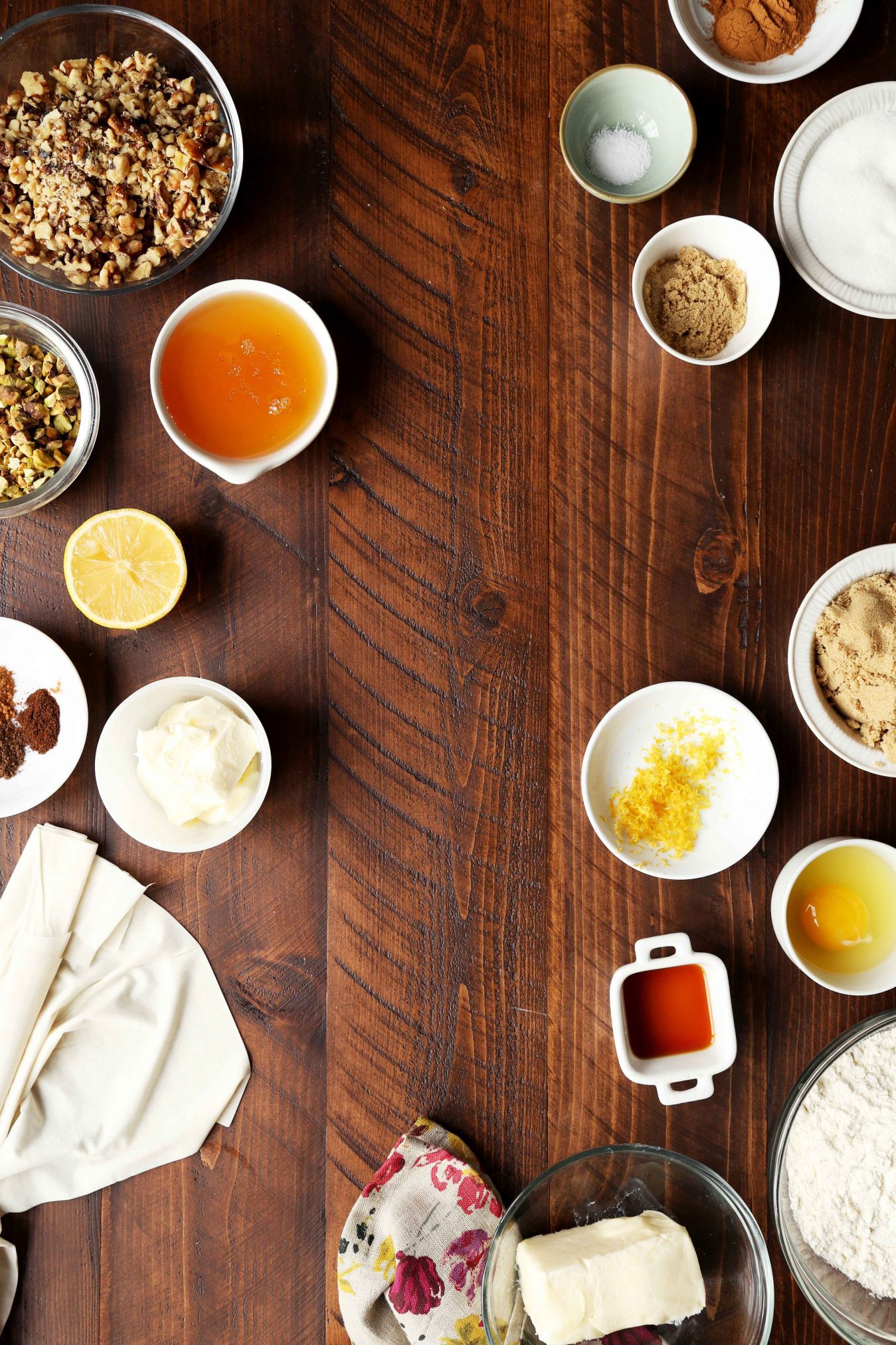 Let’s start by making the shortbread base for these bars. It’s pretty simple to put together. Cream together the softened butter and brown sugar until light and fluffy. Then add the vanilla, lemon zest and egg and stir until well combined. Stir in the flour until just combined.

**Note: The mixture should be like a stiff sugar cookie dough. It shouldn’t be too wet, nor too stiff. It will be sticky, that’s okay.** 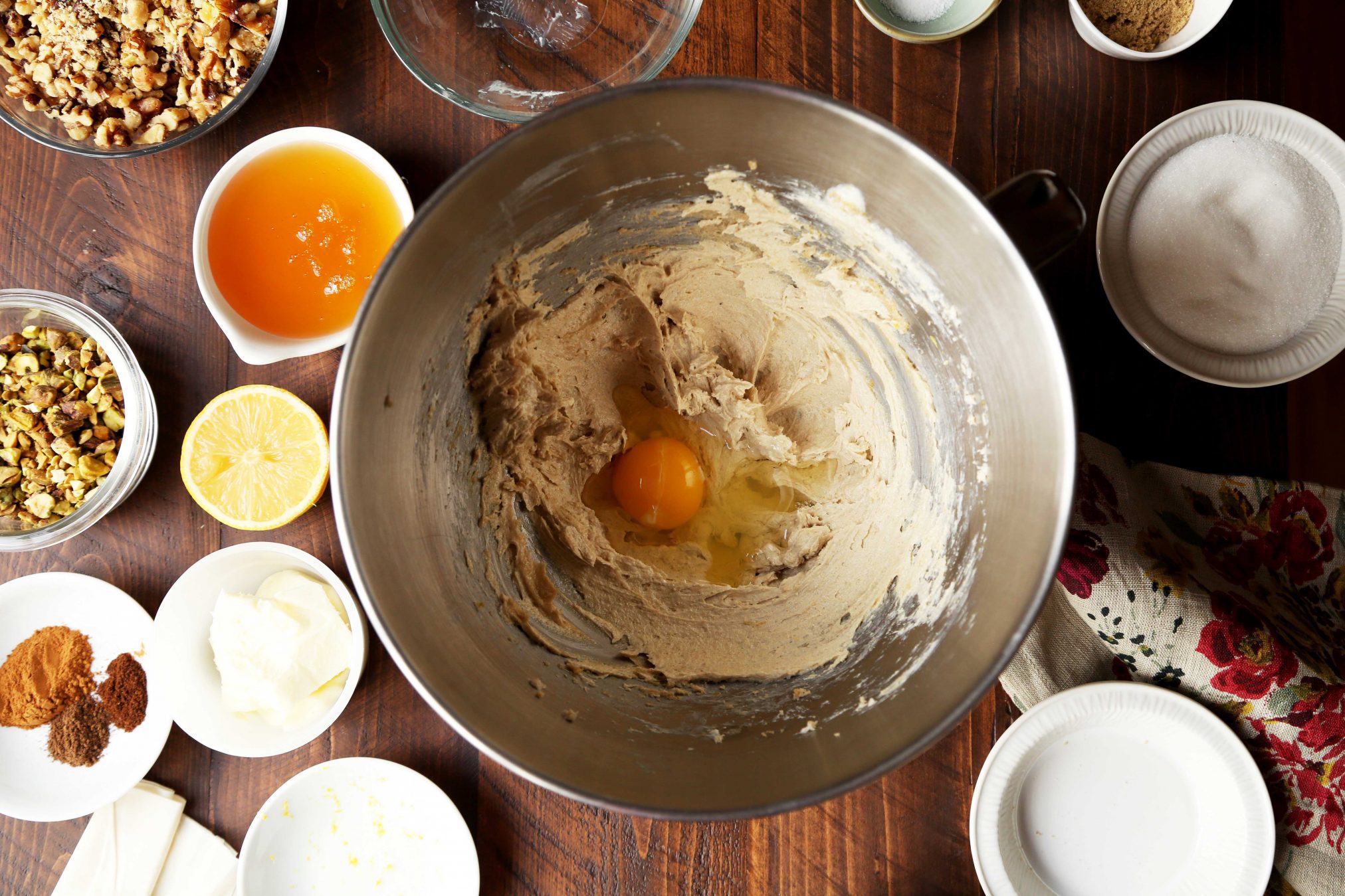 Transfer the mixture into a 9-inch square baking pan, lined with parchment paper. Then press down onto the bottom of the pan in an even layer using your hands. Bake in a preheated 350 degrees F oven for about 10 minutes, or until lightly golden brown around the edges.

**Tip: Because the dough will be sticky, if you continue to dust your hands with a bit of flour, it’ll prevent the dough from sticking to your hands and allow you to press down the dough evenly.** 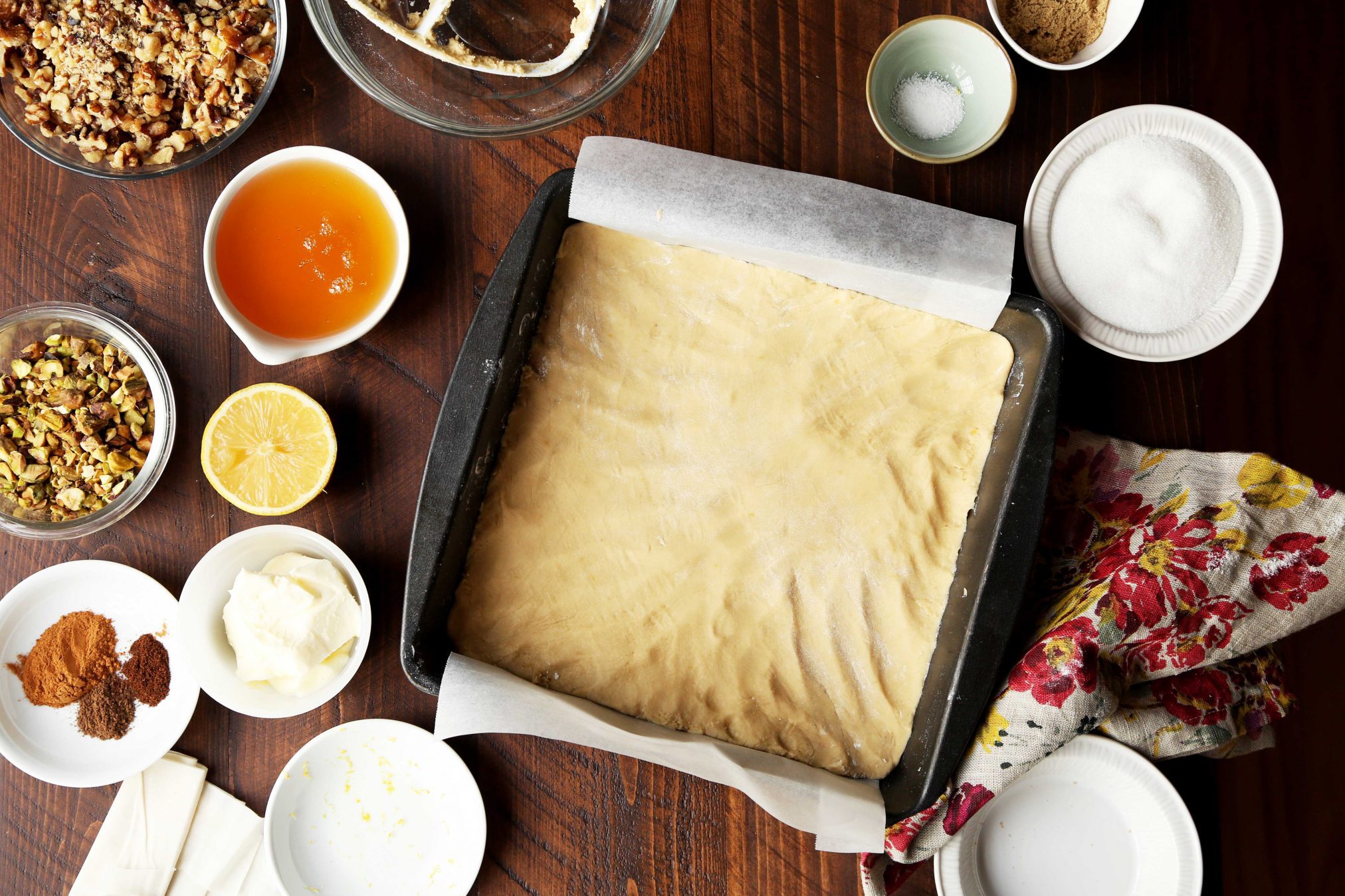 Once the crust pre-bakes slightly, remove the pan from the oven and allow it to cool while you prepare the filling. In a large bowl, combine the walnuts, pistachios, sugar, cinnamon, and salt.

**Note: You want the walnuts and pistachios to be chopped through, but not too fine. Feel free to give them a rough chop, leaving some pieces larger than others. Also, feel free to add other nuts, according to your taste preference.** 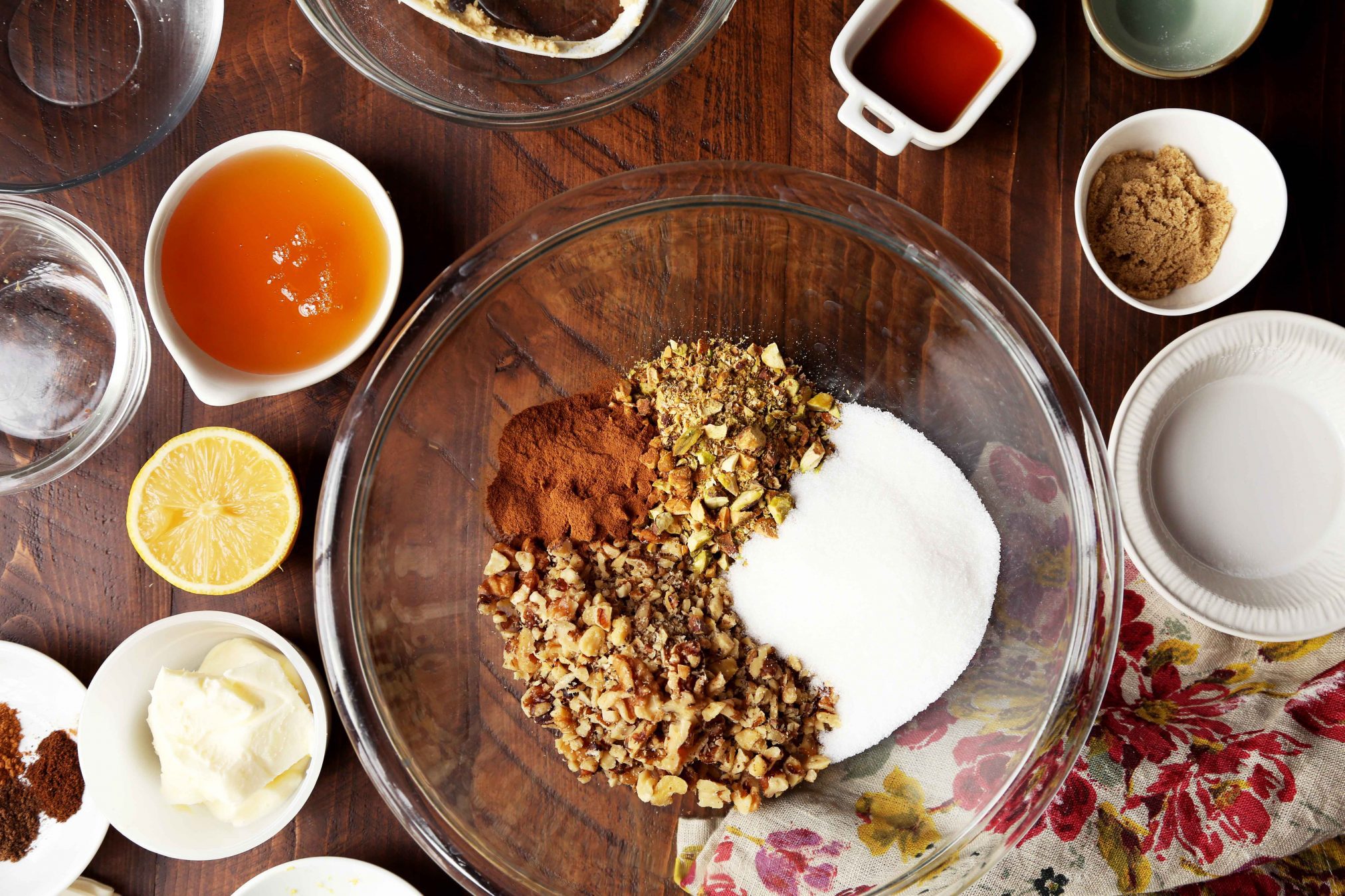 Stir in the softened butter into the mixture. It might seem like the mixture won’t come together, but keep stirring with a fork until the butter mixes into the nuts and forms a coarse mixture. Set it off to the side. 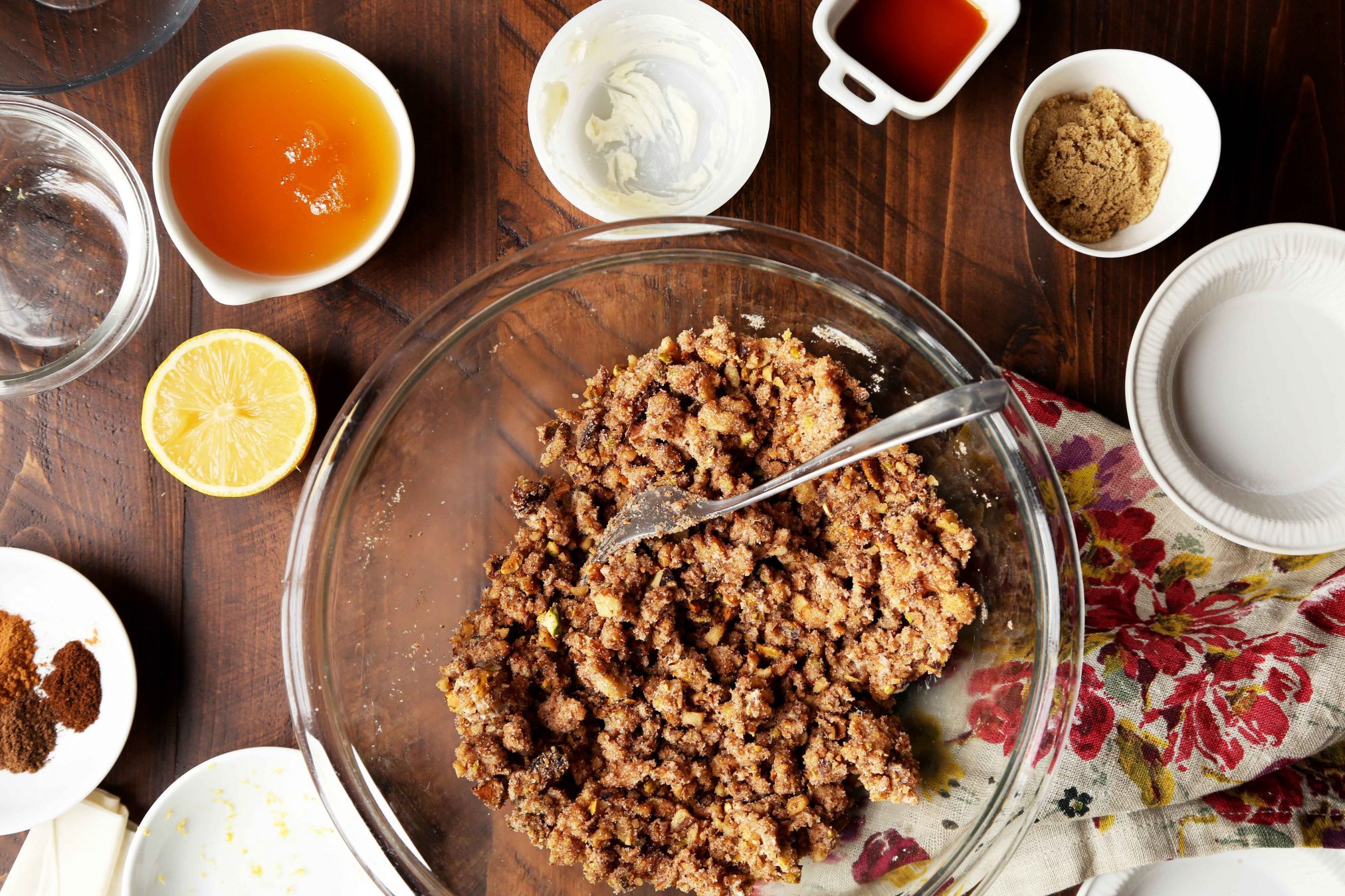 Okay, you can’t have baklava (or call something baklava) without incorporating phyllo dough in some way, shape or form. So we’re going to put together a few layers to sprinkle on top of the bars. So to do this, thaw out some phyllo dough and lay one piece on a cutting board. Brush it with melted butter. Then lay another sheet on top. Then brush again and repeat until you have 6 layers. Then using a pizza cutter, cut into thin strips and squares in different sizes. 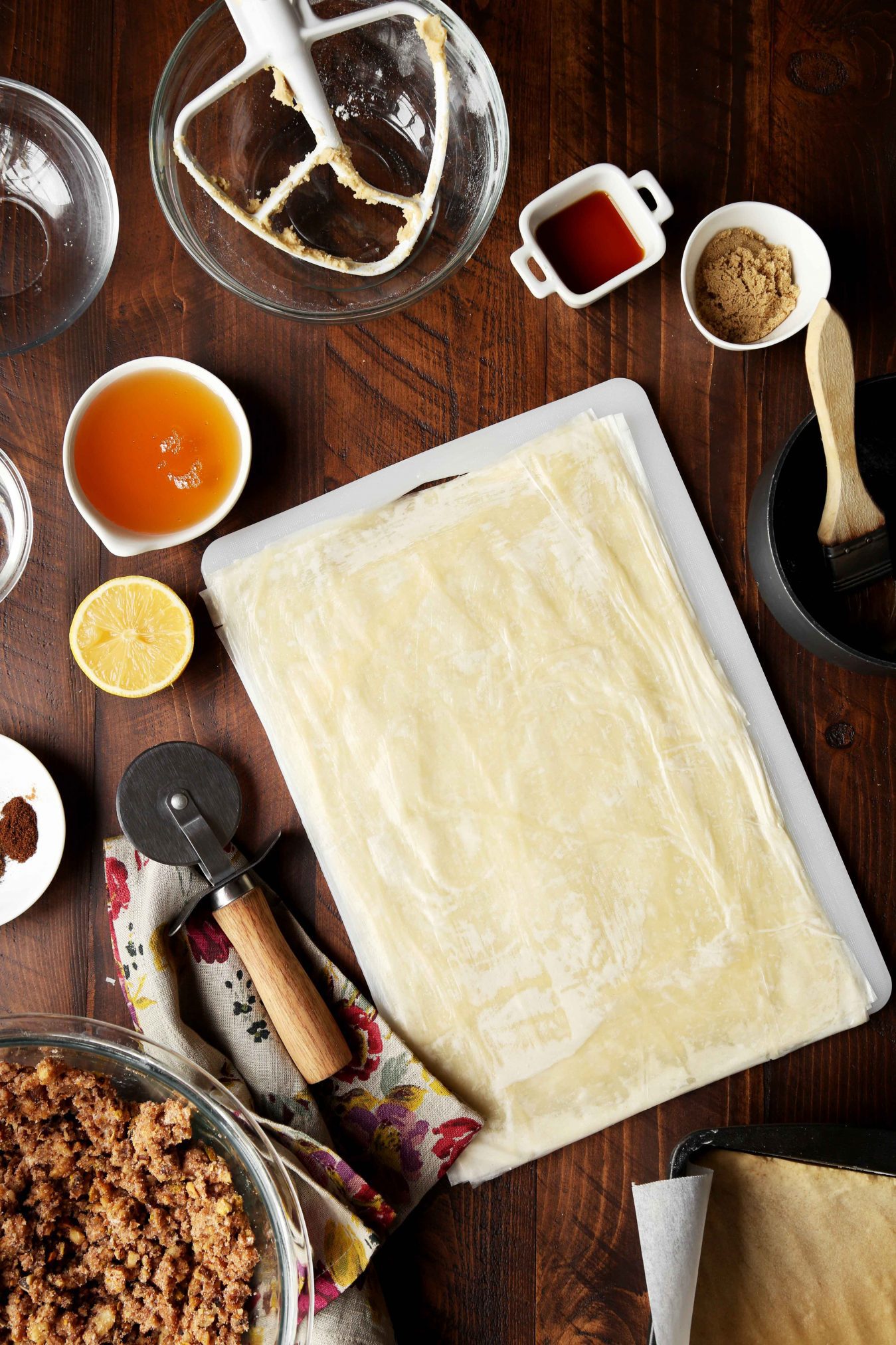 Pour the nut/butter mixture on top of the cooled par-baked shortbread layer, and spread out evenly. 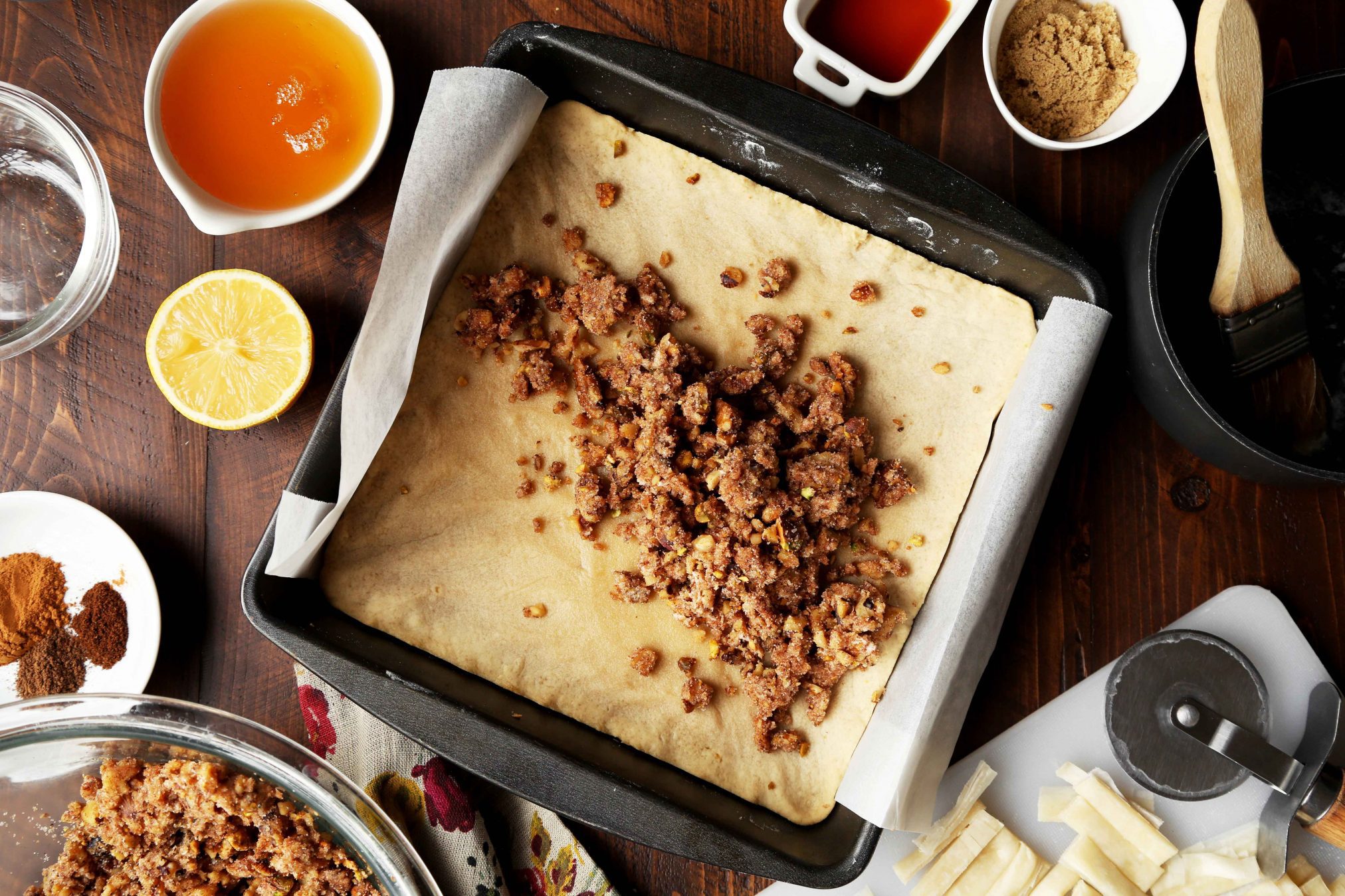 Sprinkle the top with the sliced up phyllo dough, covering up most of the nut layer. The phyllo will get golden brown and flaky, giving these bars that texture and taste baklava is known for, and it was a lot easier than actually doing all of the layering and sprinkling and layering of the traditional! 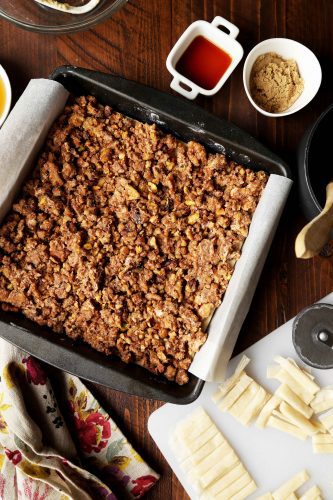 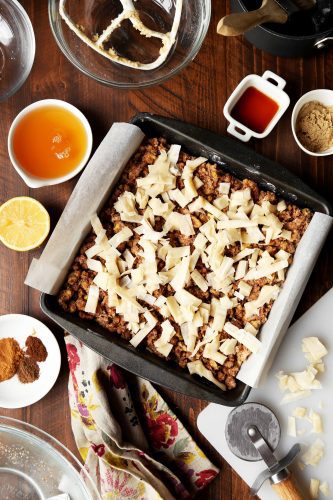 While the bars bake, let’s focus on the honey butter syrup that we’re going to pour over the baked bars. Again, this is a necessity in making baklava. In a medium saucepan, combine the butter, brown sugar, honey, lemon juice, cinnamon, all-spice, cloves, and nutmeg. Cook over medium heat until everything melts together and comes to a low simmer. Remove from the heat and stir in the vanilla. 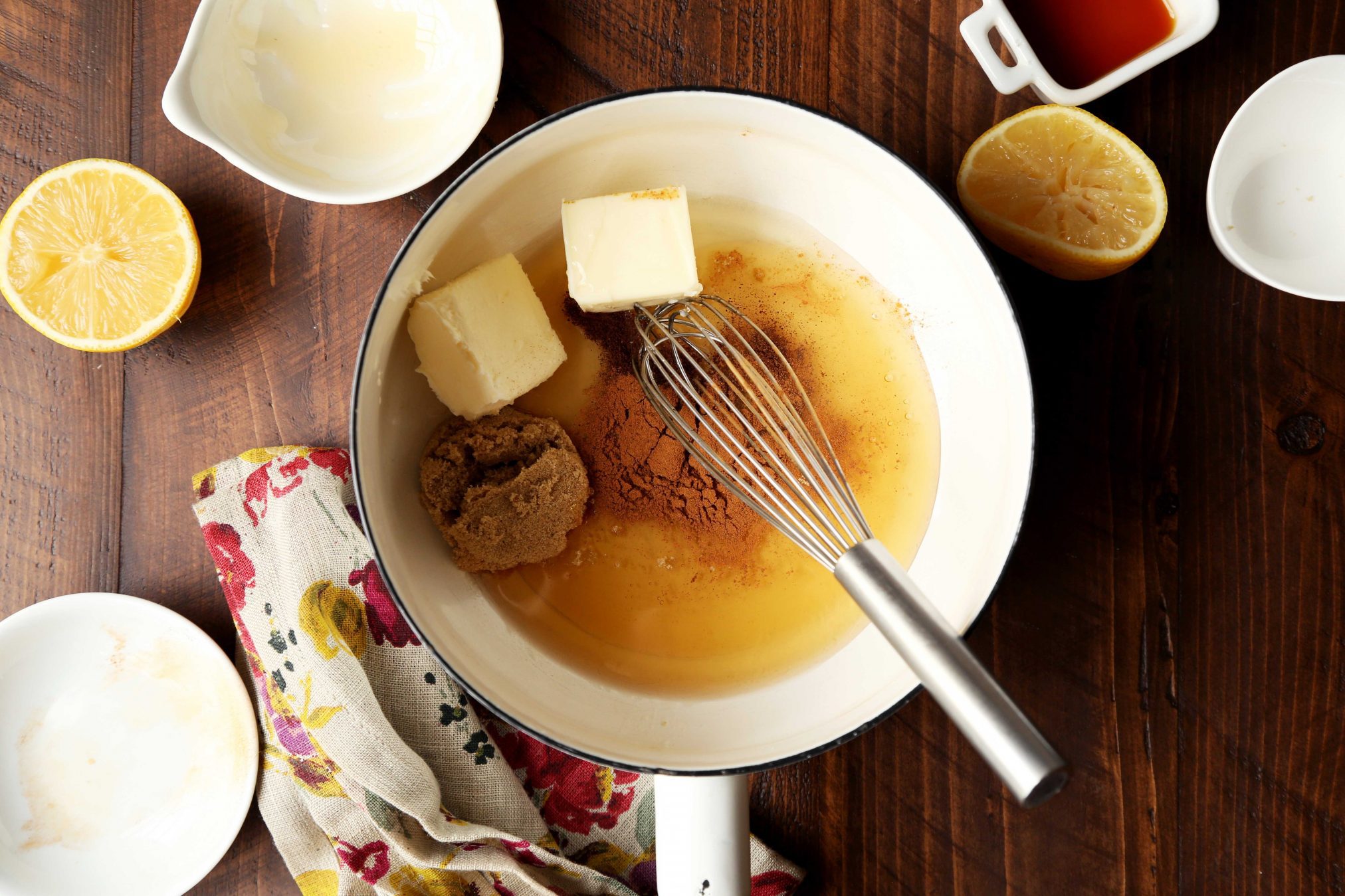 Once the bars are done, remove from the oven and then immediately pour the syrup over the top, doing your best to drizzle evenly as possible.

**Note: It’s important to pour the glaze over the top, while the glaze and the bars are hot, because the syrup will melt into the bars better.** 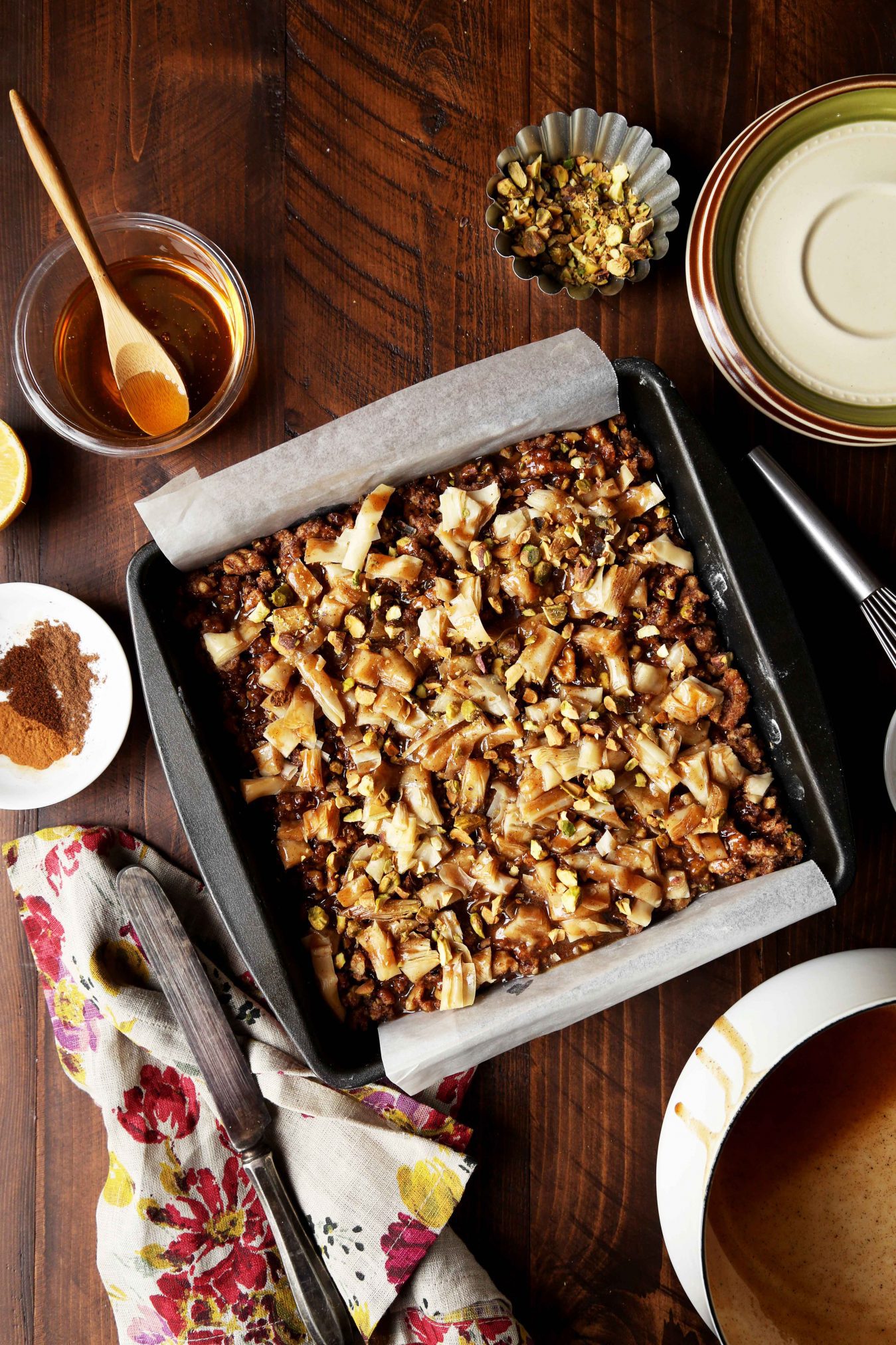 At this point, allow the bars to cool completely at room temperature, at least 4 hours, before removing from the pan and slicing.

**Tip: If you want to speed the cooling process, you can allow the bars to cool slightly and then move the pan into the freezer and chill until completely cooled. It’ll cut the time in half.** 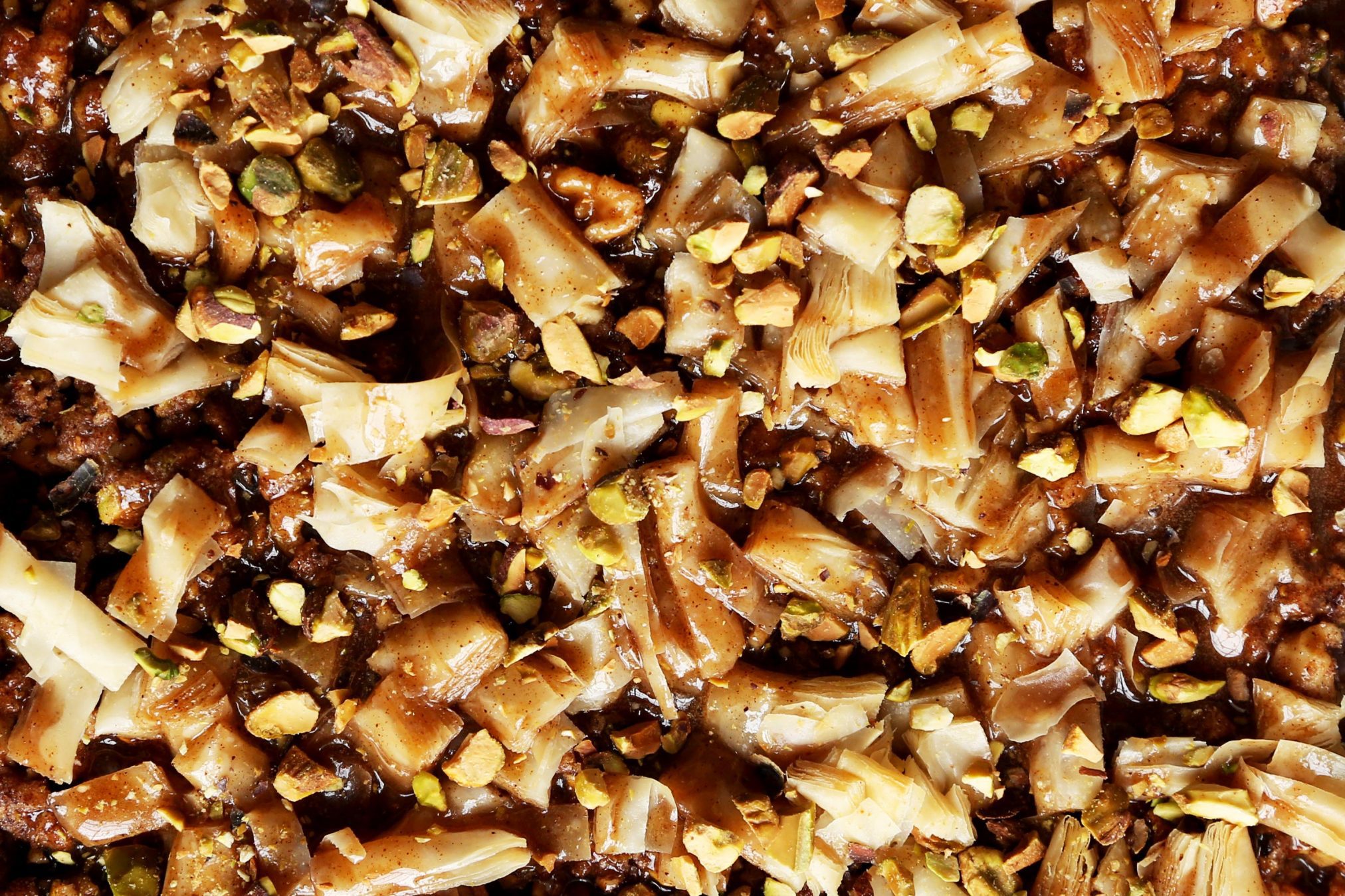 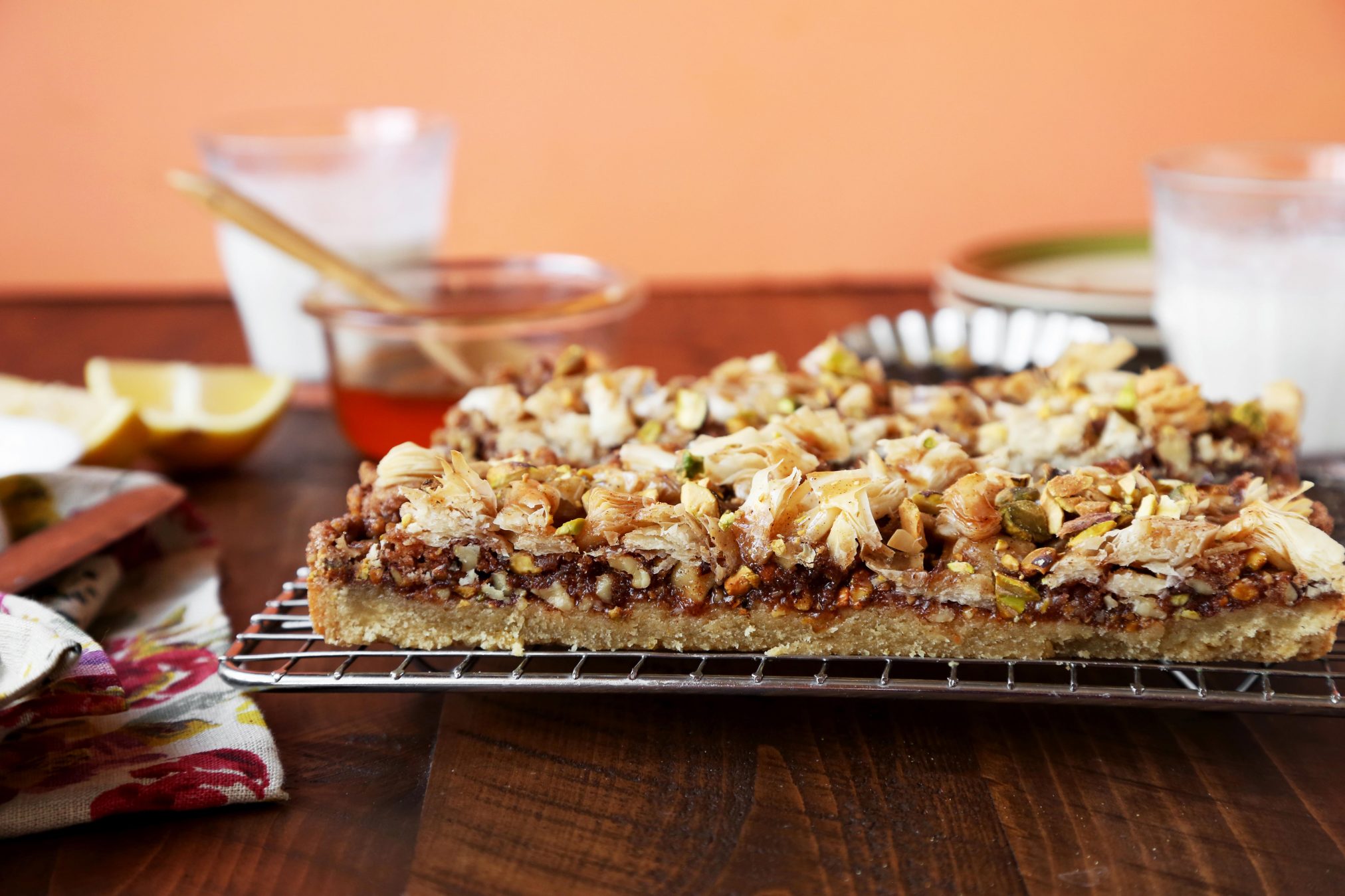 Serve the bars immediately with an extra drizzle of honey over the top and sprinkle with more chopped pistachios for added taste, texture and presentation as well. 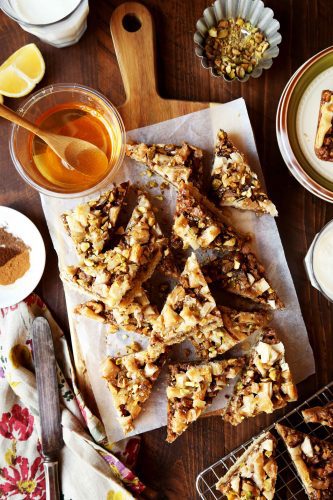 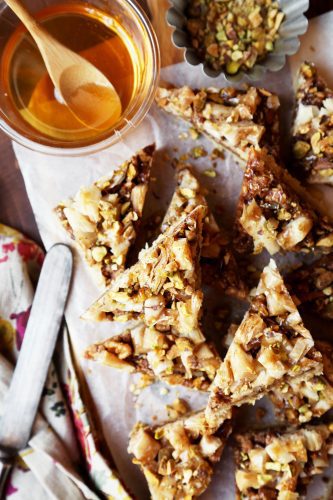 You can store any leftovers in an airtight container, or in a dish wrapped in plastic, at room temperature for up to 2 days. You can also store them in the fridge for up to 4 days. Just allow them to come to room temperature before serving or eating. 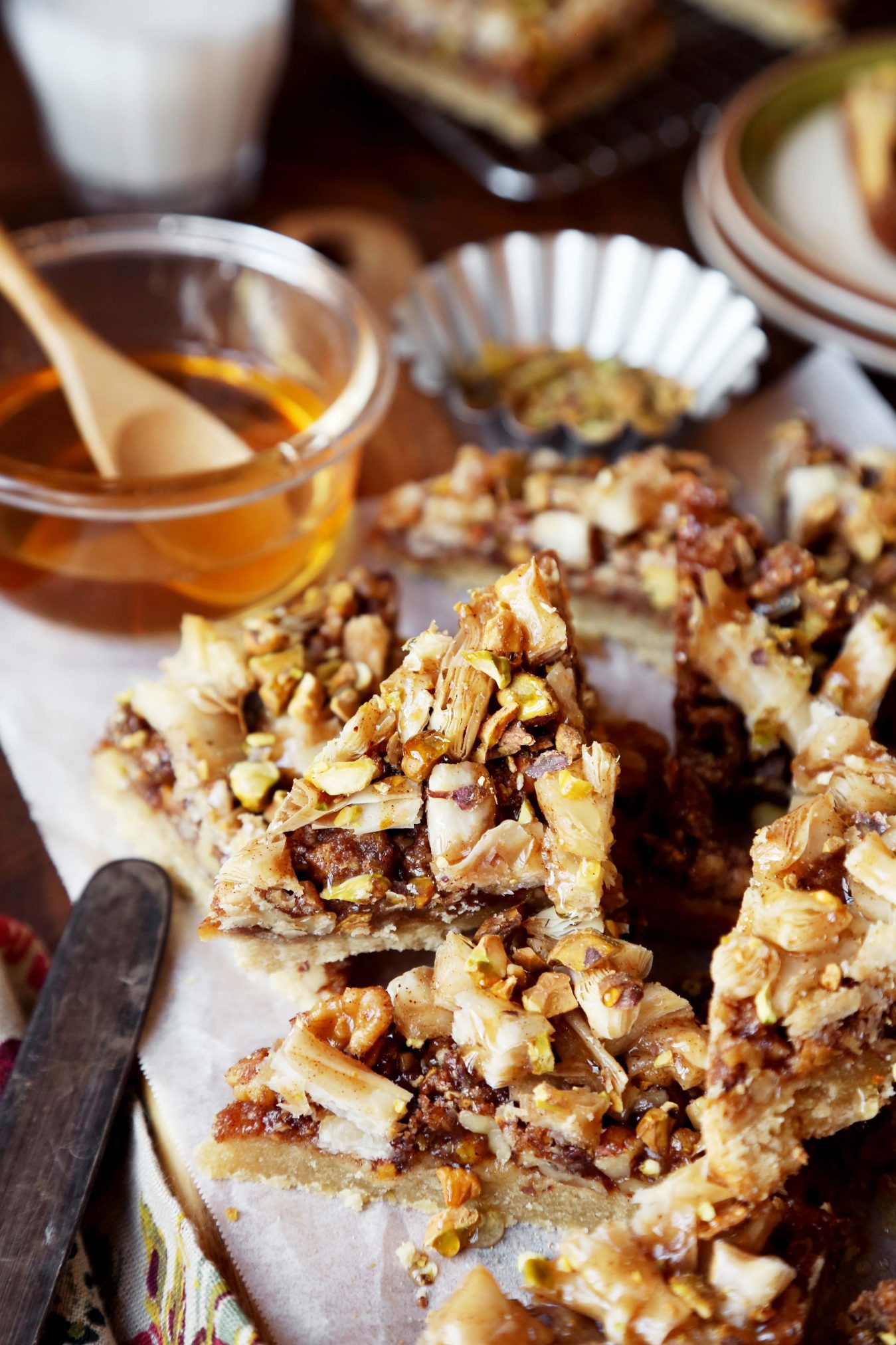 These are great to make this holiday season because they’re different and a little “out there” for most traditionalists. If you’re attending a cookie swap or need to bring a sweet treat to the office for a pot luck, then these are the way to go because they’ll intrigue people and they’ll be the first to go! 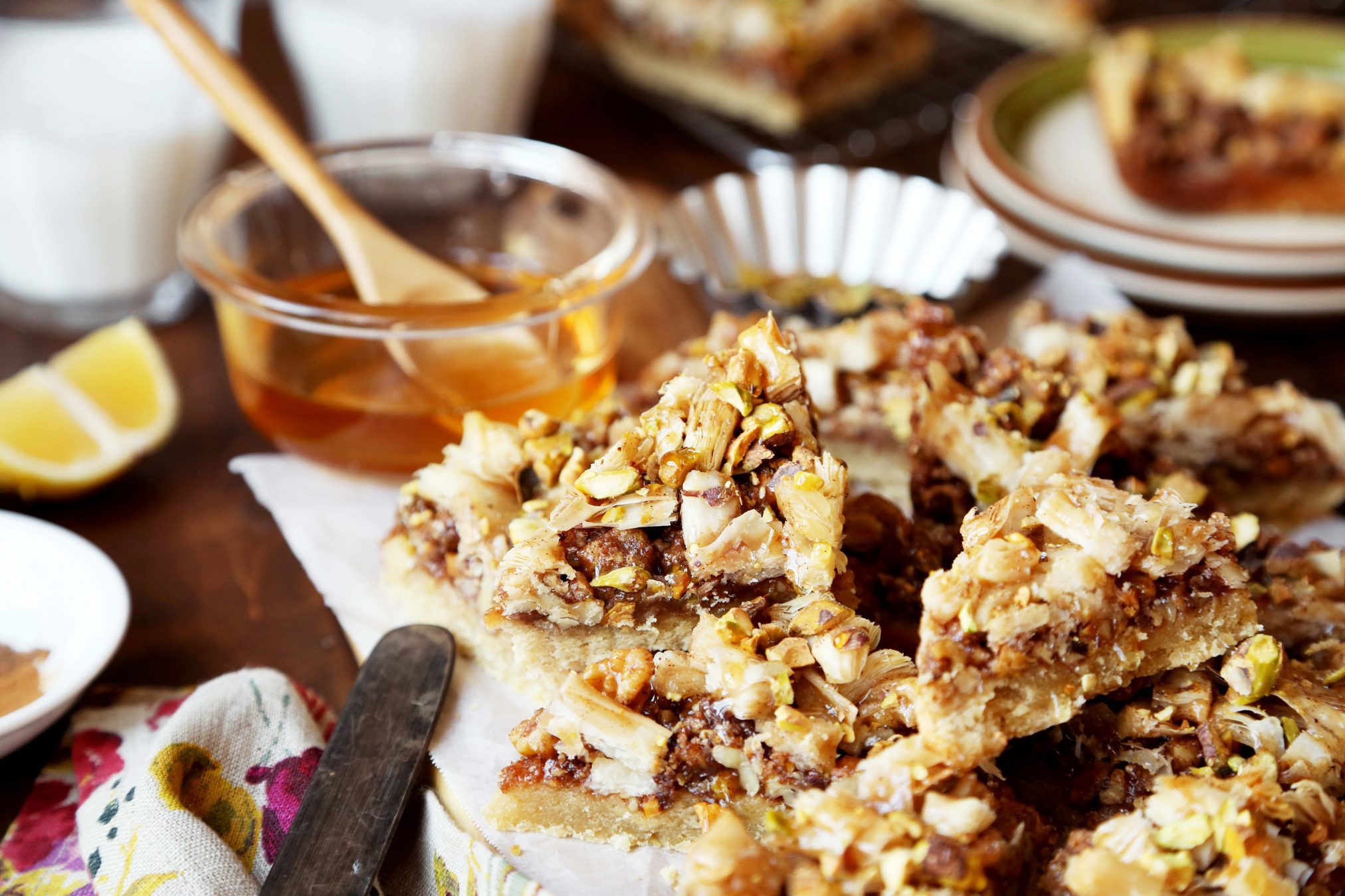 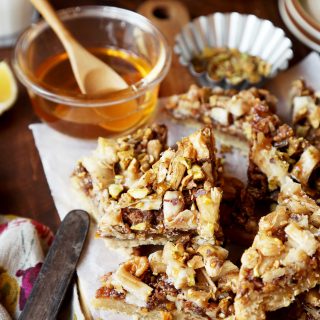