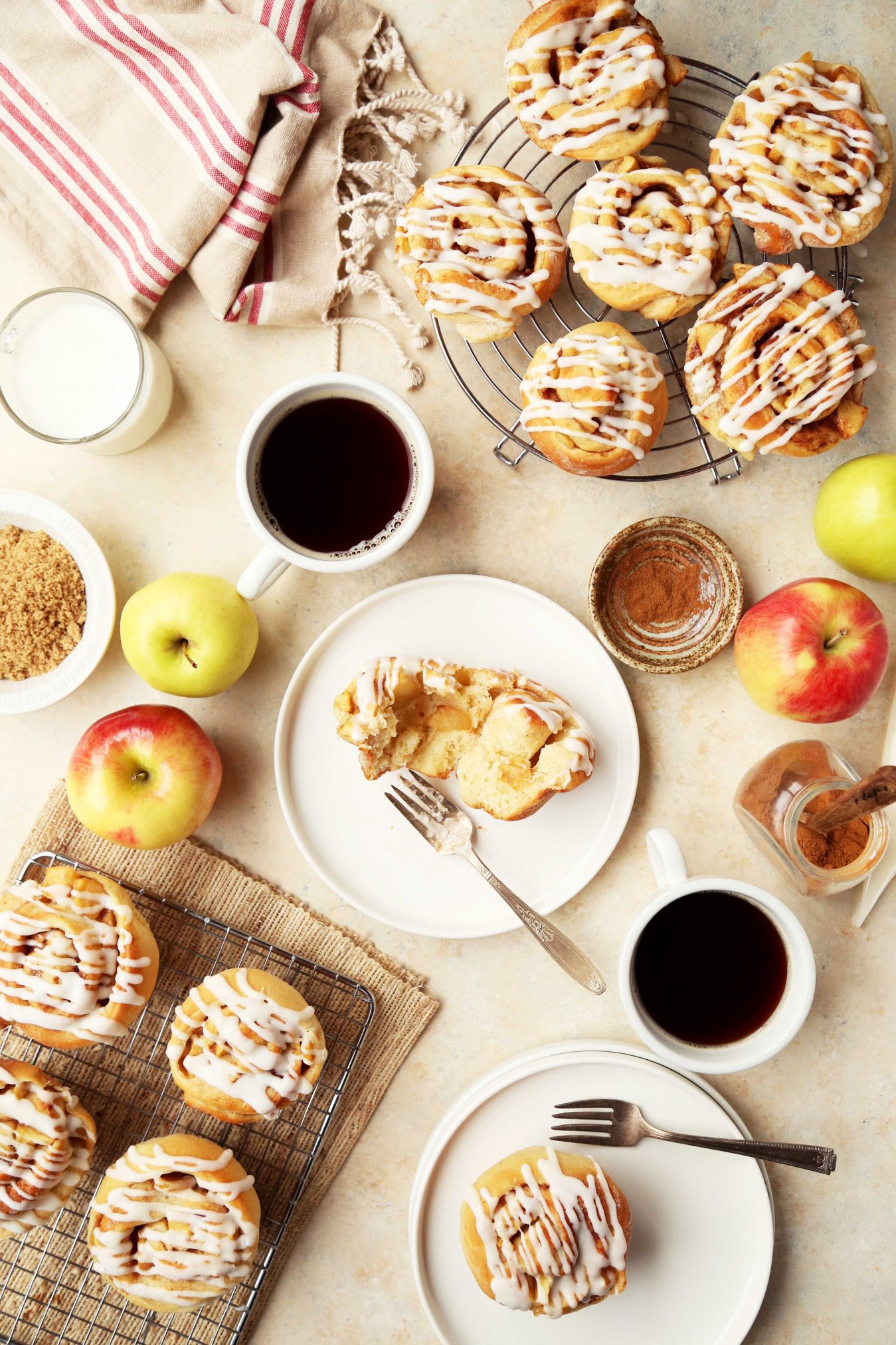 I felt the need to make cinnamon rolls in muffin form and then I filled them with sautéed spiced apples A) because it seemed like the right thing to do and B) because we all know that muffins and apples are both necessities first thing in the morning. I’m not saying that these would make for a healthy breakfast, but I’m also not saying they wouldn’t. These Apple Cinnamon Roll Breakfast Muffins are a sure fire win for everyone. I mean it’s got the word breakfast built right into them, right there in the title, so how can we go wrong? We’re only making right decisions in life from here on out. Making these muffins for yourself today is one of those right decisions.

The best part about these cinnamon roll muffins, aside from the apple surprise in the middle, is the fact that because they’re baked in a muffin tin, they all sort of become the “edge piece.” Let me explain, while everyone is raving about and fighting for the soft middle pieces in a pan, I’m always the one going after one of the crusty edge pieces. So if you’re like me, no you don’t have to worry about having enough because they’re all perfect crusty around the edges, but soft in the middle. It’s the perfect situation. 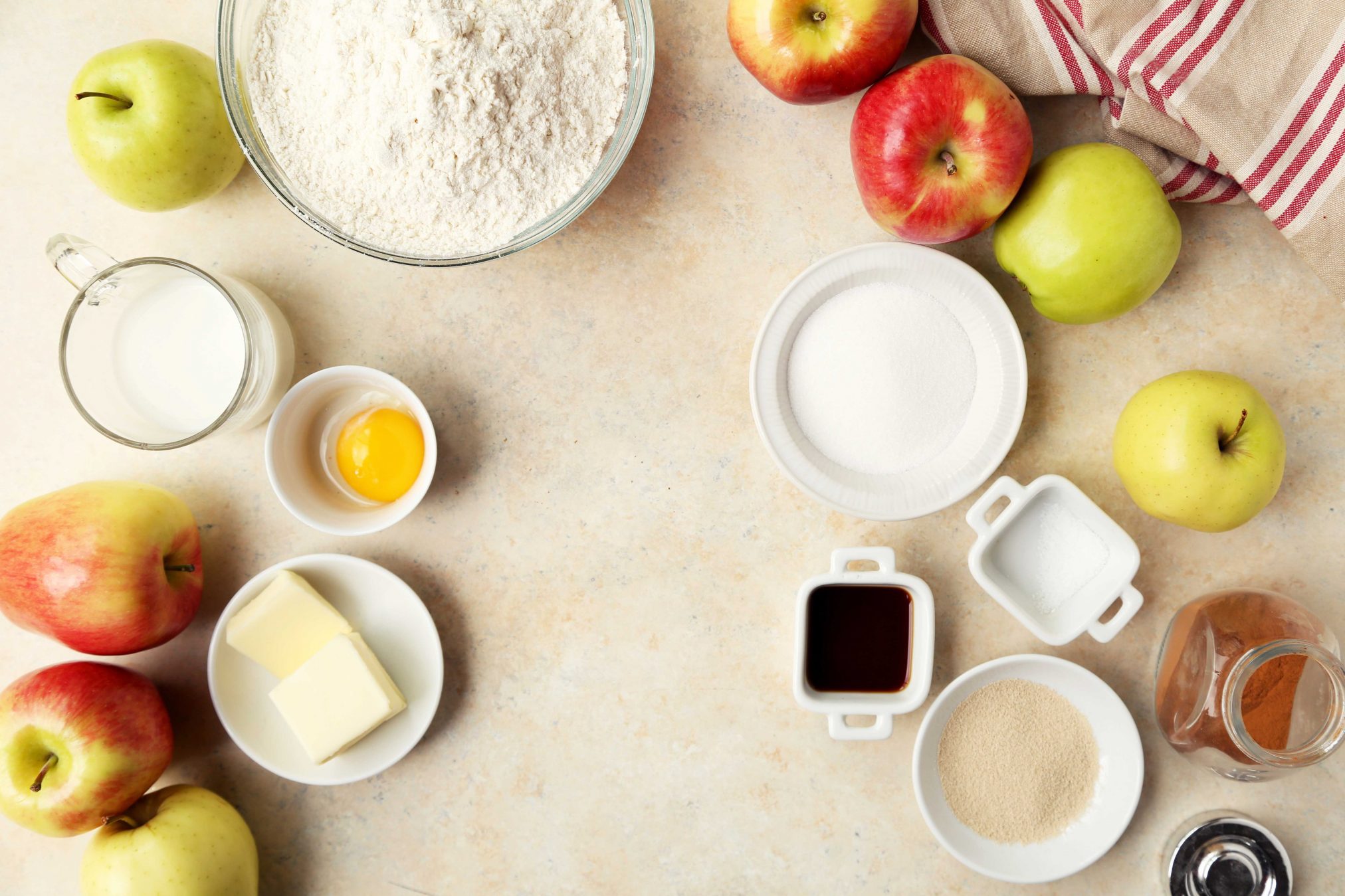 Let’s get started with the dough since it has to rest for a bit. This is your basic run of the mill, everyday, sweet yeast dough. It’s a good recipe to have on hand because you can customize it a thousand different ways. Warm the milk, water and butter over low until the butter has started to melt and the milk is warm to the touch, not hot. Remove from the heat and sprinkle in a pinch of sugar and the yeast. Let sit until foamy and frothy, about 10 minutes.

**Note: This stage is very important to any yeast recipe, if you’re using active dry yeast. It’s important to have the temperature of the milk or water just right so as to wake up that yeast. If it doesn’t foam and froth, then toss it and start over.** 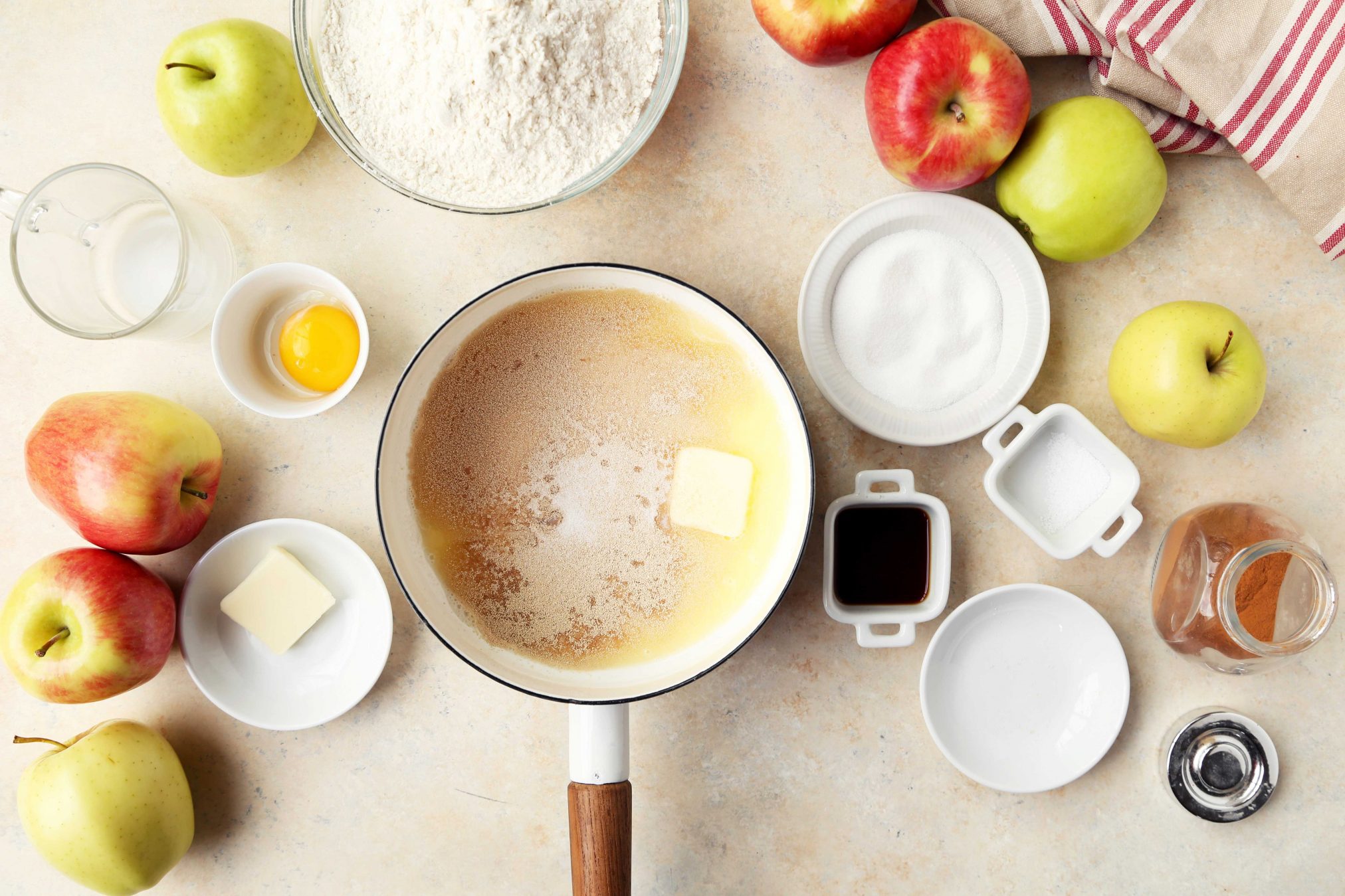 Transfer the mixture to the bowl of a stand mixer, and add in the egg yolk, vanilla and cinnamon.

**Note: If you don’t have a stand mixer, you can definitely do this the old fashioned way, with a bowl and a trusty wooden spoon.*** 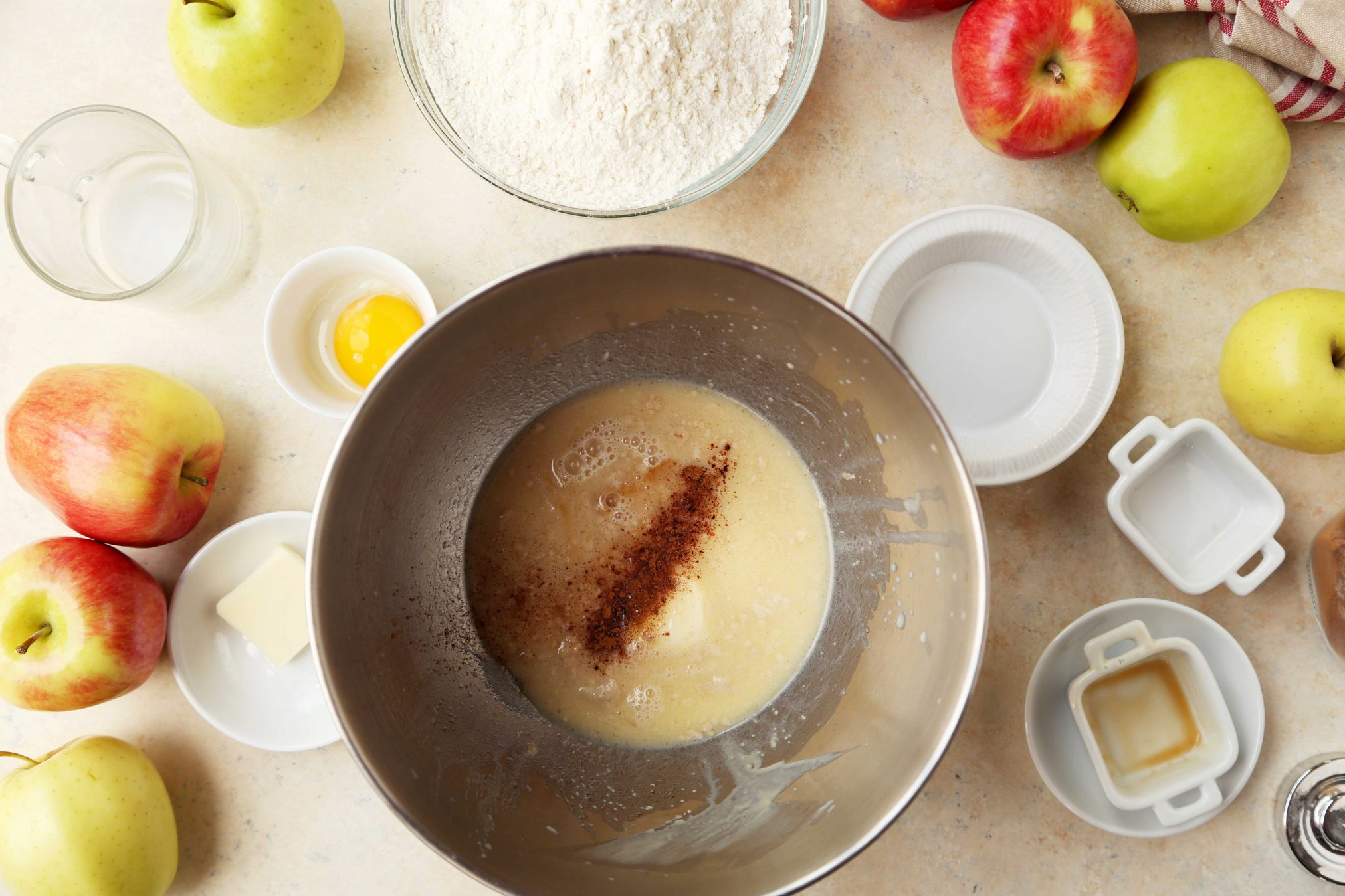 Add in the flour, salt, and sugar. Mix on low with the dough hook, until the mixture comes together to form a rough dough. Increase the speed to medium and knead until soft, about 6 minutes. The dough should be somewhat sticky, but soft. 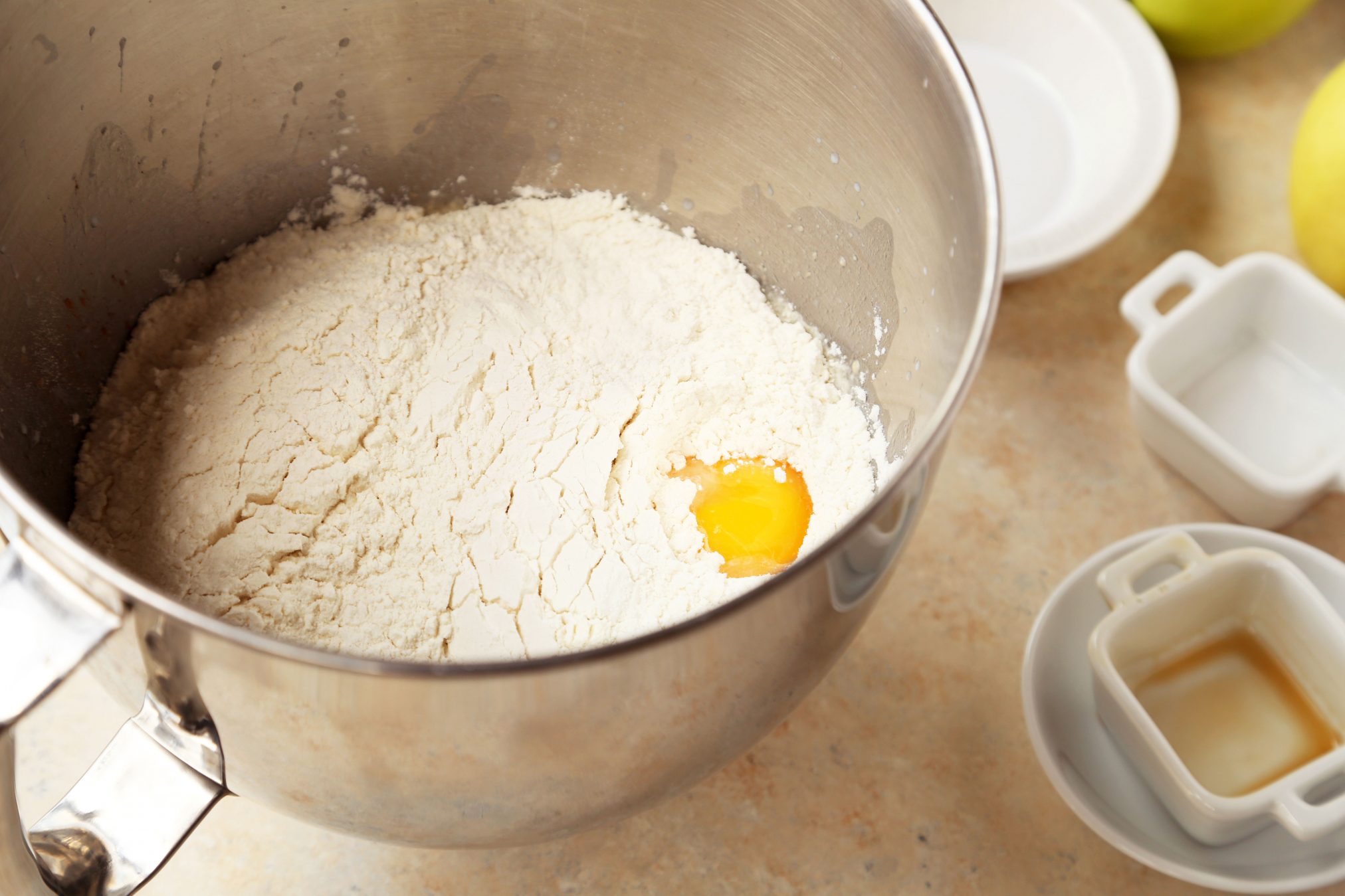 Transfer the dough to a greased bowl, or you can use the same bowl you mixed it in, turning it over to coat both sides. Cover loosely with plastic wrap and a damp kitchen towel. Let rest in a warm draft-free spot until doubled in size, about 1 hour.

**Tip: I like to have my yeast doughs rest in the oven, turned off, because it’s warm enough and draft-free. You can also try the top of your refrigerator.** 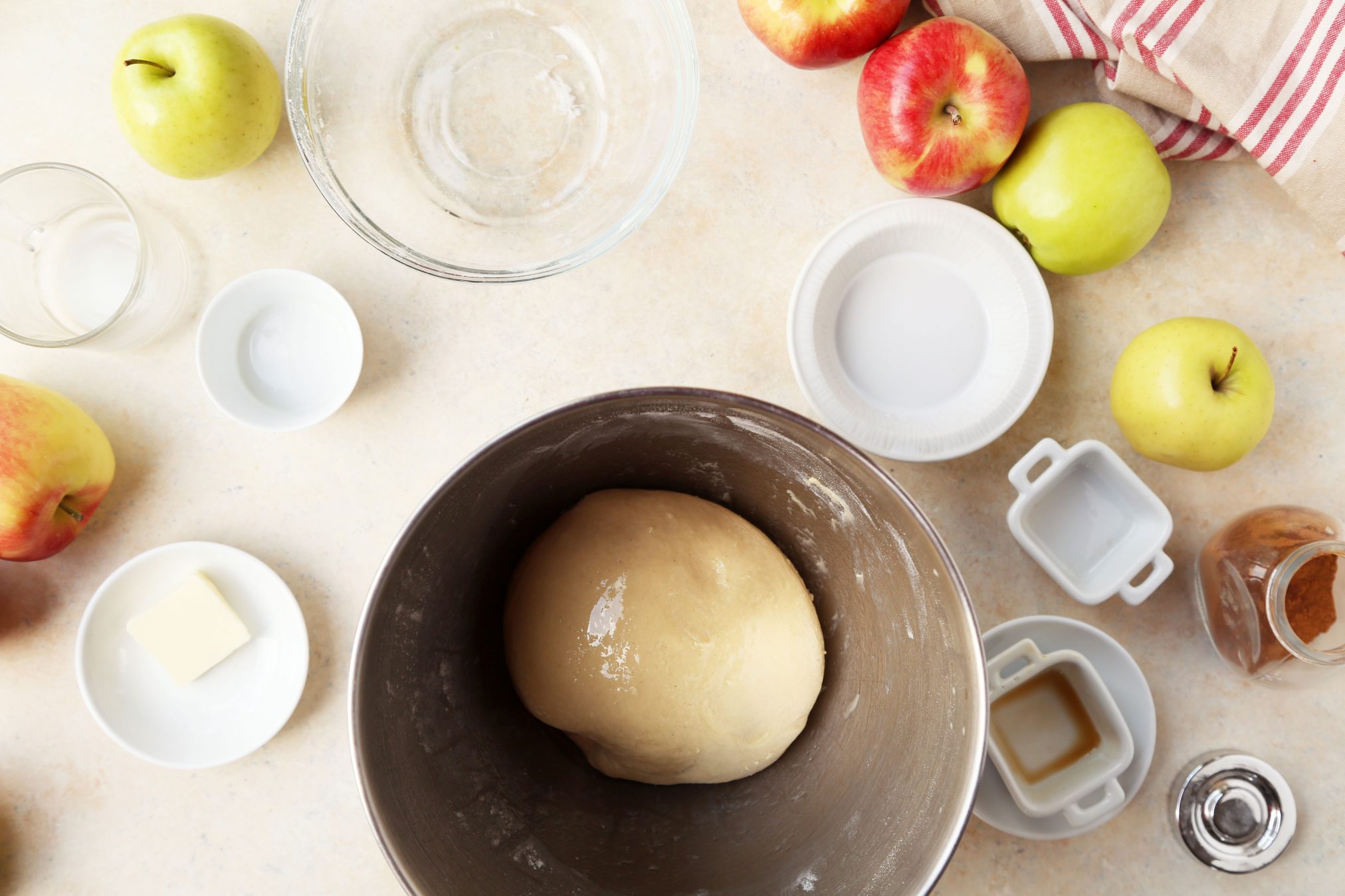 In the meantime, let’s work on the apple filling. Melt some butter in a skillet and then add the thinly diced apples, cooking them for about 2 minutes.

**Note: You can use whatever apples you love for baking. Keep in mind that some apples are juicier than others and some lend themselves more to baking. I like a mixture of Granny Smith and Honeycrisp because they’re the perfect blend of flavor and texture!* 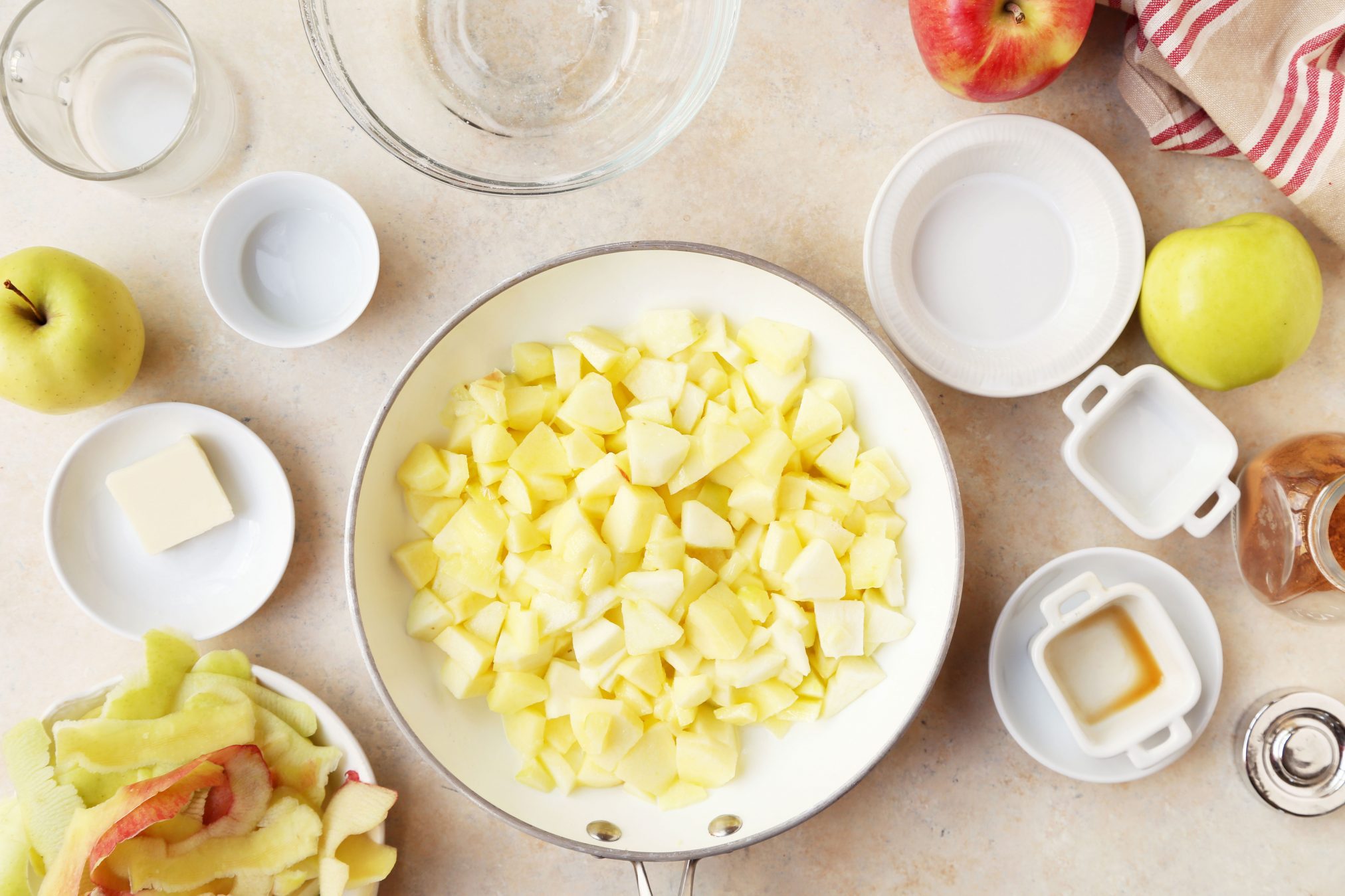 Sprinkle in the spices (cinnamon, nutmeg, ginger, and cardamom) and brown sugar. Cook, stirring often, until the apples have softened and “caramel” has developed. Remove from the heat and let cool completely. 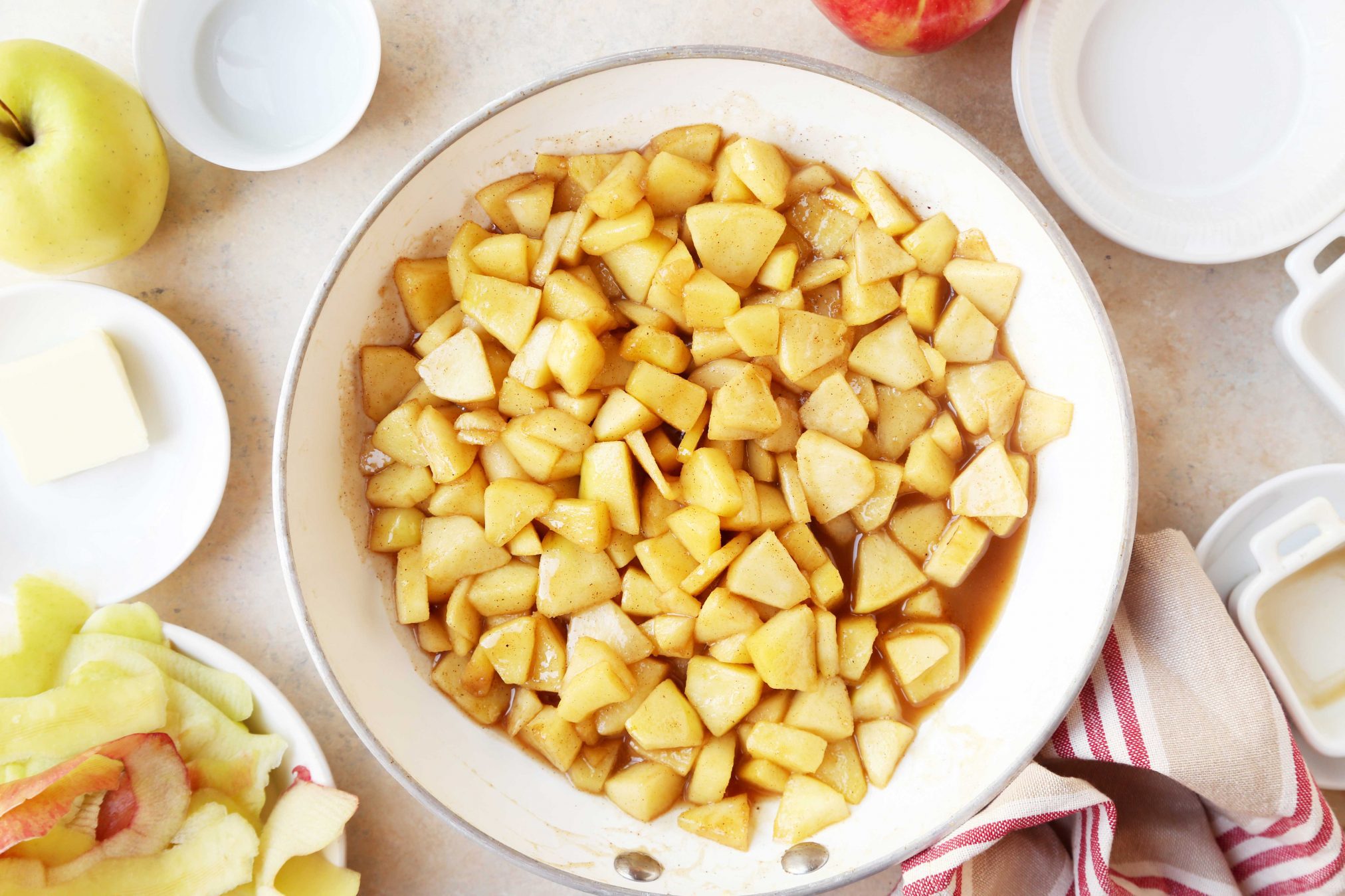 Once the dough has risen, punch it down and then transfer to a well-floured work surface. Roll out to a large rectangle, about 1/4-inch thick. It doesn’t have to be a specific size, just roll it out into somewhat of a rectangle as best you can. 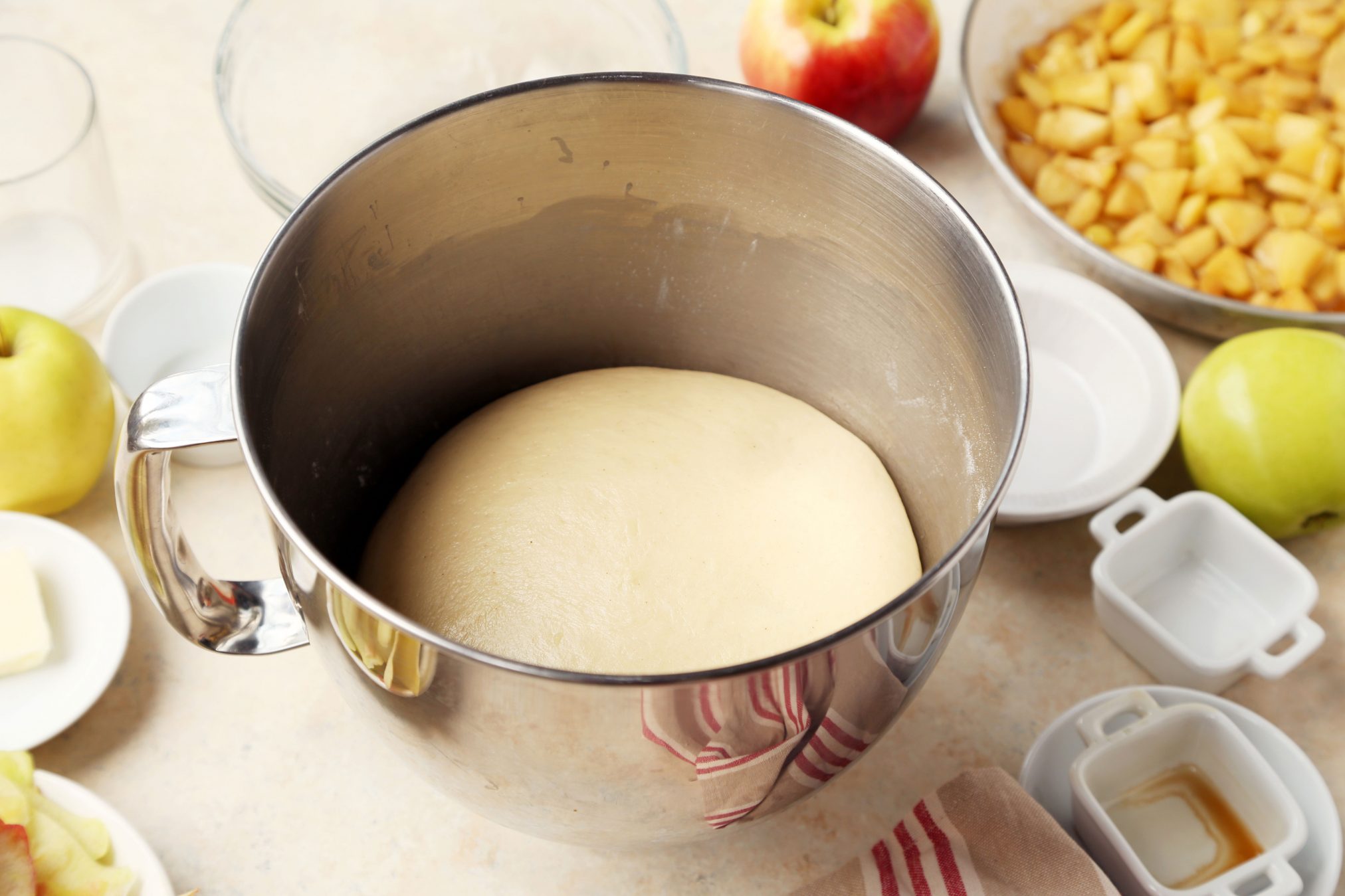 Brush the dough with softened butter and sprinkle with cinnamon sugar. Just a simple mixture of granulated sugar and ground cinnamon. Then spoon the apples (with some of the caramel) over the dough in a single layer, making sugar it’s all evenly distributed.

**Note: Don’t add all of the caramel that the apples cooked in because that’ll add too much moisture to the dough and you don’t want to end up with soggy muffins.** 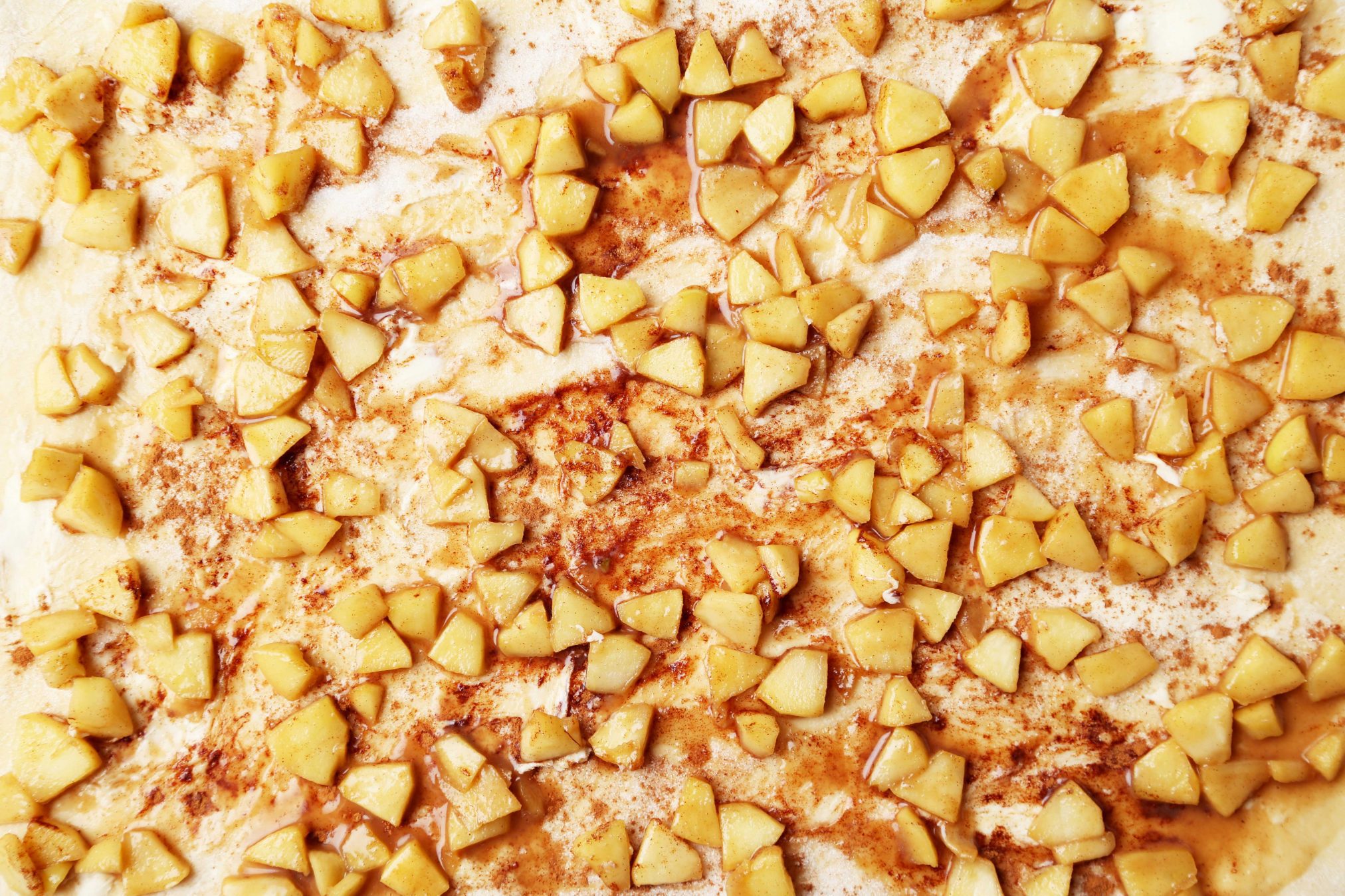 Roll in to a tight log, lengthwise, trim the ends and then cut into 12 even pieces. I like to cut the log in half, and then each half in half and then each half in half again. That way I know I end up with even pieces of dough. Place each piece in a well-greased muffin tin. I like to press them down a bit once I put them in. Cover with plastic wrap and a damp kitchen towel and let rest until doubled in size, about 30 minutes to an hour. 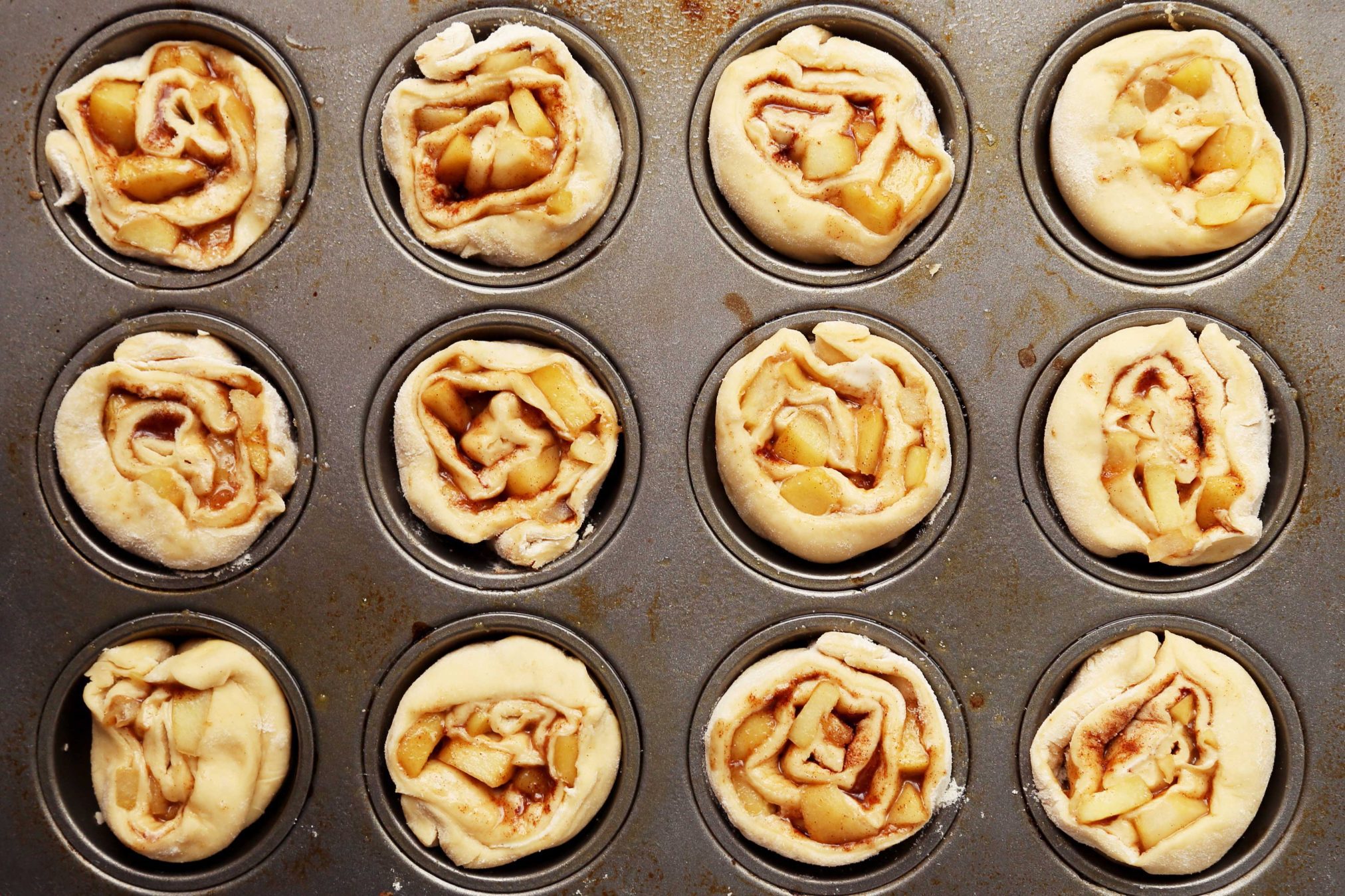 Bake in a preheated 350 degree oven until puffed and golden brown, about 25 to 30 minutes. Remove from the oven and let cool in the pan for about 10 minutes before inverting onto a wire rack. They might need to be coerced out of the pan with a butter knife. 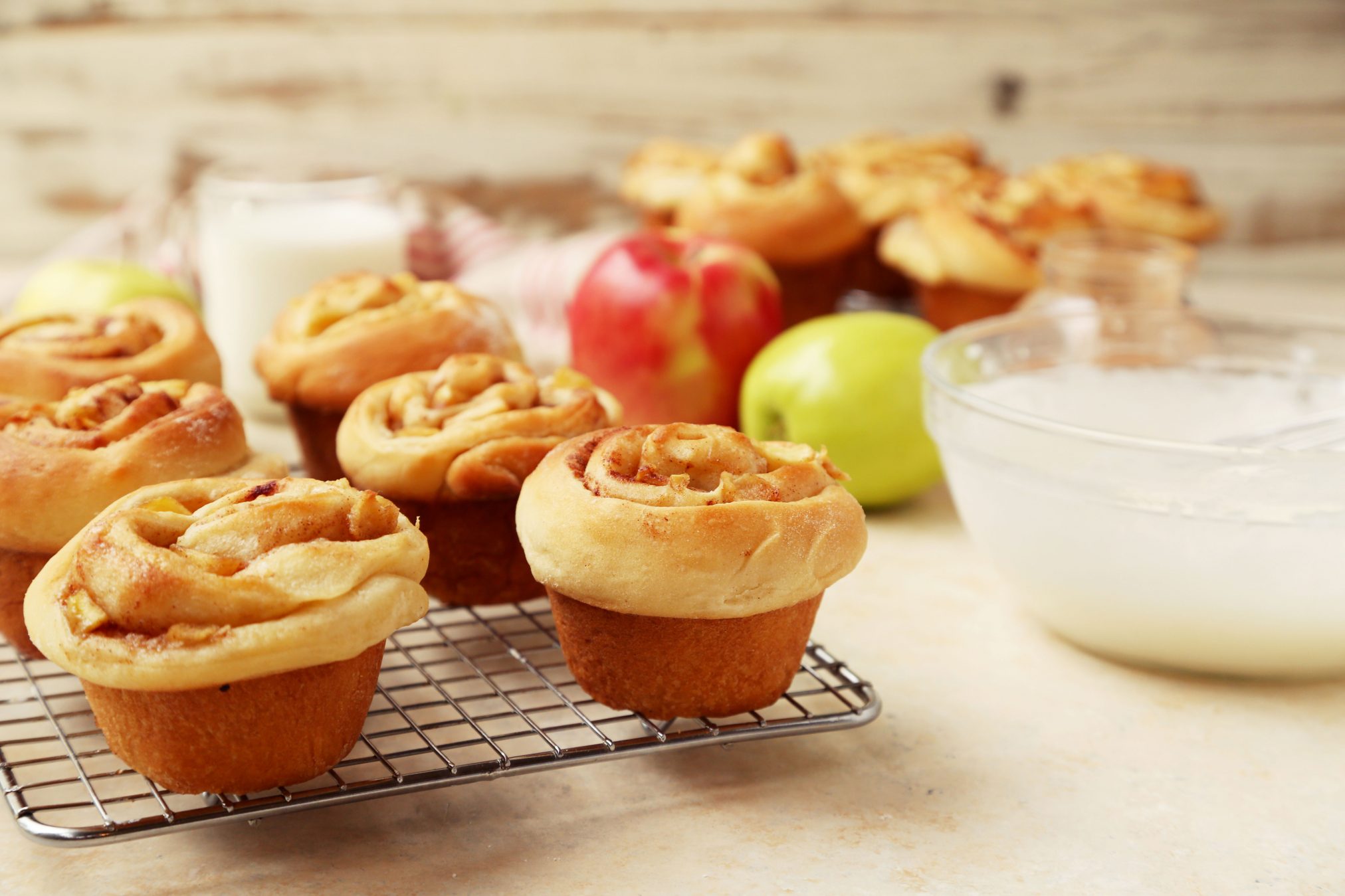 To make the glaze, in a medium bowl, whisk together the powdered sugar, butter, vanilla, salt and enough milk until a spreadable consistency is reached. You want it somewhat thick so that it doesn’t just roll or melt away.

**Note: You can spread the glaze over the warm bun muffins or you can transfer the mixture to a sandwich bag with the end snipped off, and pipe the glaze on top.** 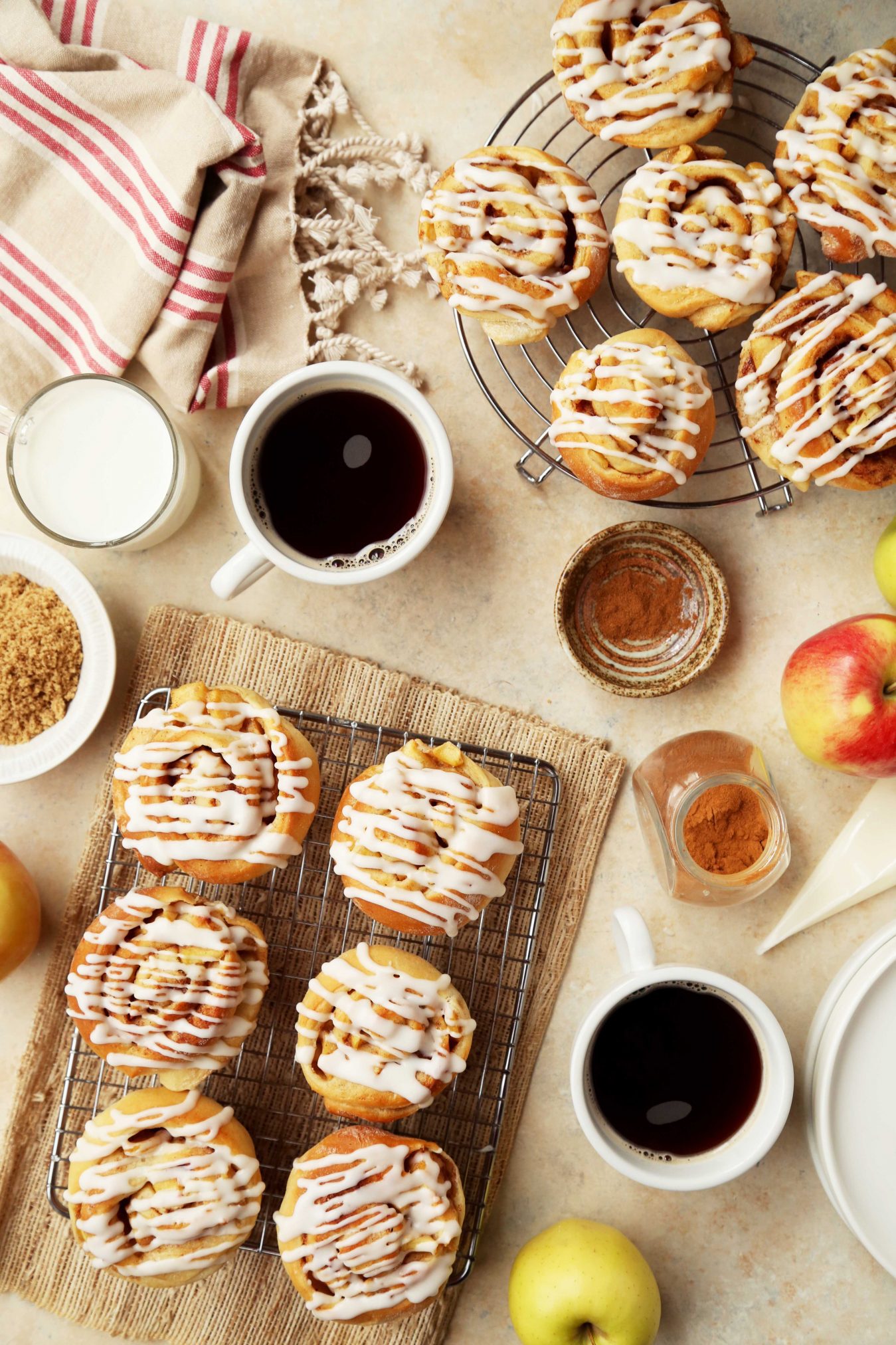 As with most cinnamon rolls, these are best eaten the day of and warm, but if you can’t down 12 muffin buns all in one day by yourself or don’t want to share, then you can wrap them in plastic wrap and keep them at room temperature for up to 2 days. 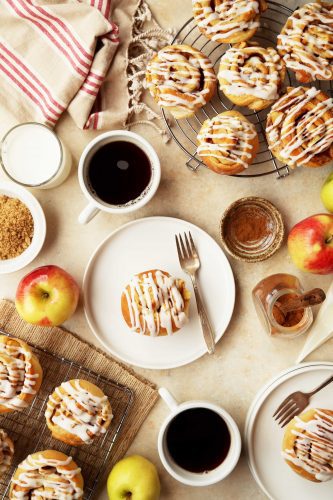 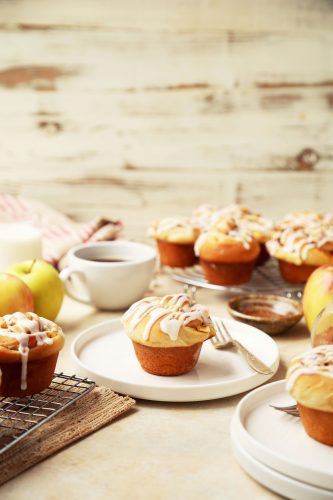 If you plan on freezing these muffins, don’t glaze them. Allow the muffins to cool completely after they’ve baked and then place them in a freezer bag. Keep in the freezer for up to 3 months. When you’re ready to serve them, just rewarm them in a 350 degree oven for about 5 minutes. Make the glaze and frost them then. 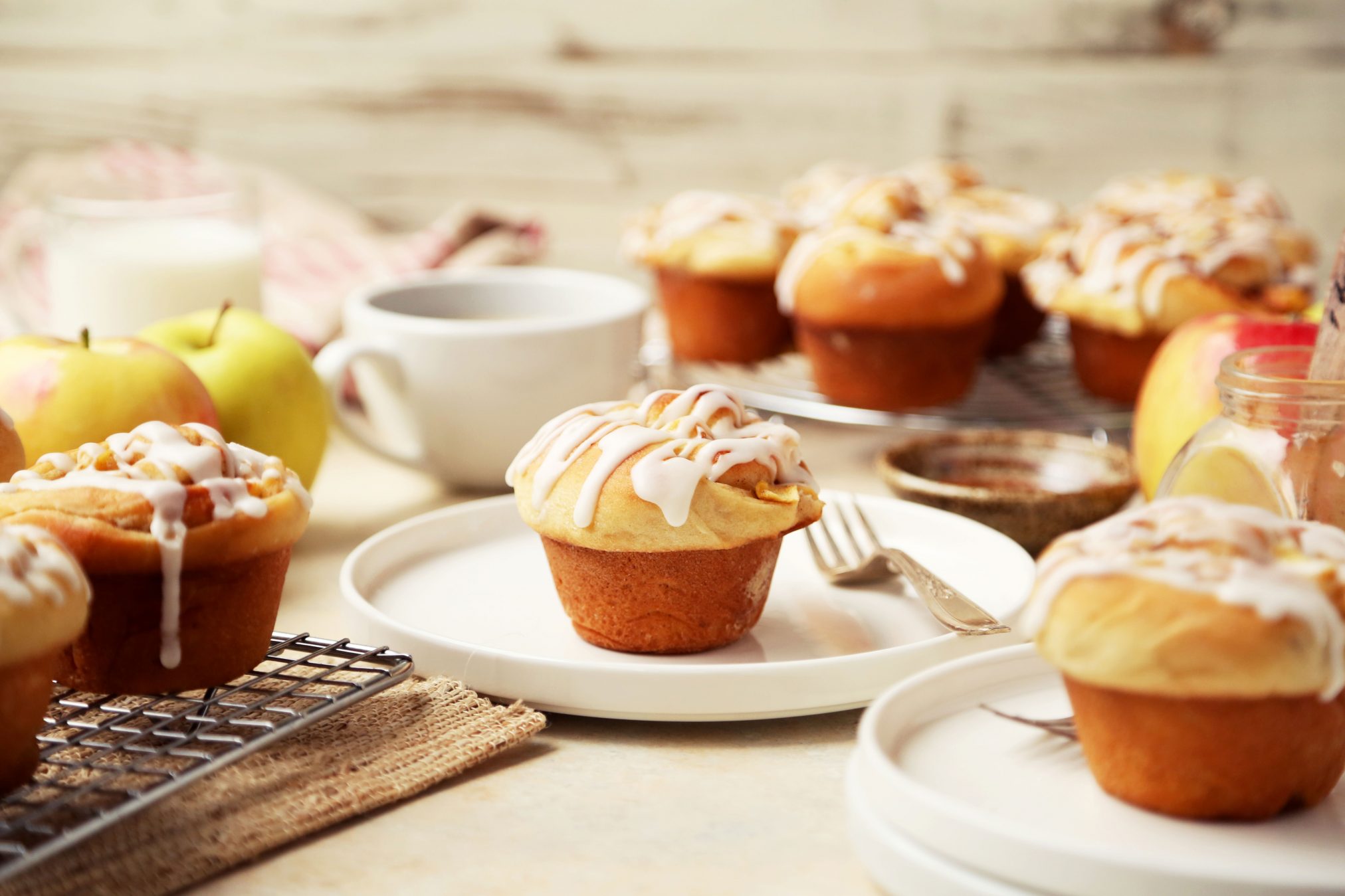 Feel free to add some raisins or nuts to these muffins with the apples. I would but there’s nothing worse for me than finding a raisin in my cinnamon rolls. Talk about pure evil. I love raisins in everything and anything, and even by themselves, but just loathe them in my cinnamon rolls for some reason. 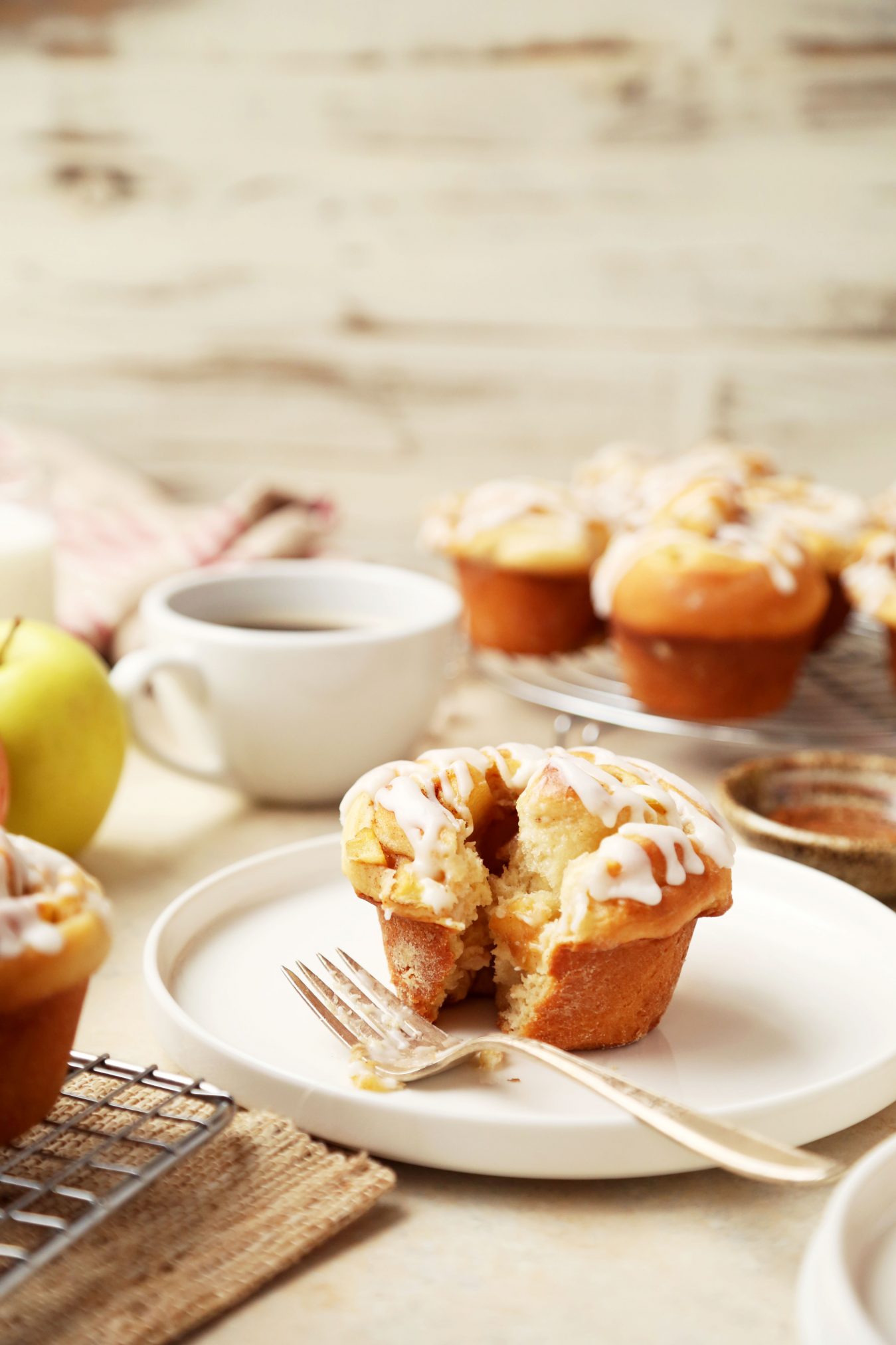 Keep these on hand for breakfast, since they’re muffins they are most definitely a breakfast food. Apples in the morning, rolled around inside of bread and then drizzled with a glaze just seems like the right thing to do first thing in the morning. 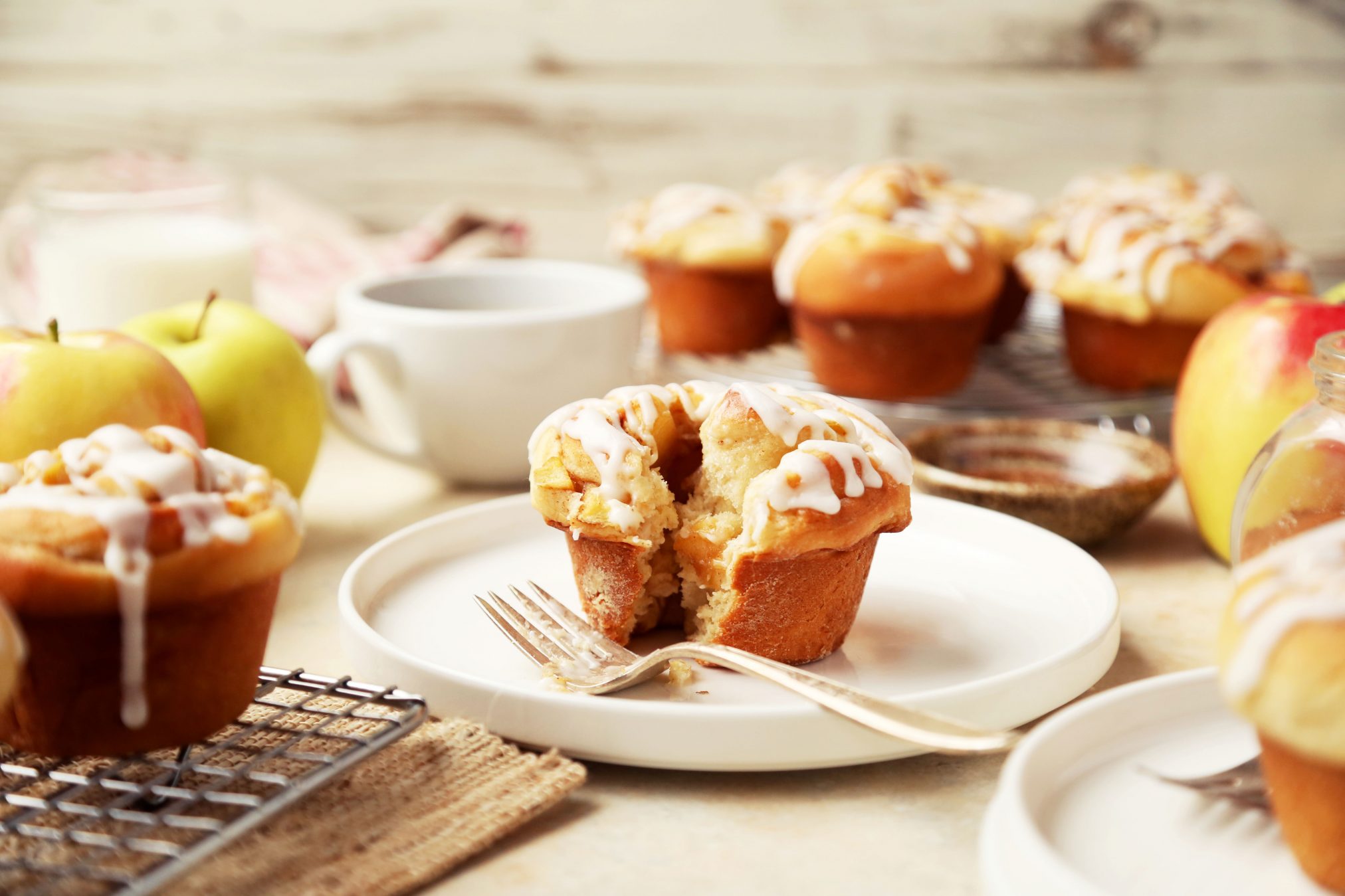