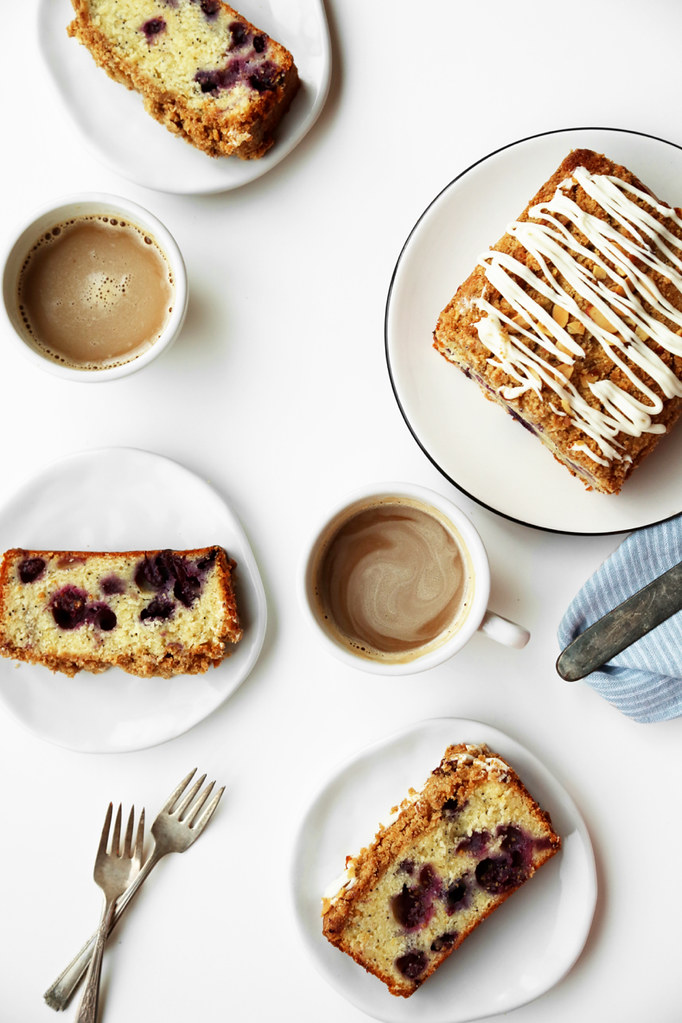 Okay, so the honest truth is that I had to make this cake a total of four times. Yes, you read that right. Four times before I got it right. I was ready to scream, pull out my hair, denounce pound cakes for life and give up on everything because a little ol’ pound cake was defeating me. This is why I never make pound cake by the way, because I feel like they’re always so difficult, for some unknown reason. It’s not like they require a lot of ingredients or attention for that matter. In theory, they’re kind of simple to make. Yet it’s my baking kryptonite. For those of you that think I never mess up in the kitchen, think again. Even I, with all of the baking experience I have, still make mistakes from time to time. It’s totally normal. In fact I’d be worried if I didn’t mess up because those little hiccups humble me and make me a better cook/baker. So don’t be hard on yourself if things don’t always come out right the first time. Just keep trying.

The very first attempt of this cake, I forgot to toss the blueberries in flour so they all sank to the bottom of the loaf pan, causing a not-so-pretty wet mess at the bottom, forcing me to lose half of the cake to moisture. No good. I clapped my forehead and called myself a dummy for forgetting such a crucial step. Sure I was disappointed, but I started all over again without thinking twice about it. So off Julian went to the grocery store for me and got more blueberries and cream cheese and almonds so that I could go in for round two. I made the cake again, this time a bit faster since I didn’t have to photograph it step by step. I was thankful for that. The second time was also a failure. When I removed my precious pound cake from the oven, the center had completely caved in. I started laughing (masking the irritation) because I haven’t had a cake cave on me in many years since I started baking. I don’t know what happened, maybe I opened the door too soon or maybe there was a movement or loud bang by the oven at some point and it scared my cake into ruin? Who knows. Anyhow, I was ready to give up at this point but Julian (and my mother, through various frustrated phone calls all made by me to her) kept telling me to try again. Believe me I didn’t want to. So there I went off again to the grocery store to buy yet another box of blueberries and cream cheese and almonds and butter this time around and I got home and did it once again. Mind you it’s like 11:30 at night at this point and I’ve made this cake for a total of three times now.

This time around I felt really confident. I told myself this was it, this time it would work. So I made it all again (with my eyes closed practically), poured the batter into the pan, topped it with the streusel and popped it into the oven. I even kiss the pan and said a little prayer before closing the oven door. I crossed my fingers and continued with some other work. I made sure to not make any sudden movements by the oven door, tip-toeing when I needed to, nor did I open it prematurely. This time around, I waited until the time was up. I open the oven door and all I saw was horror. Complete and utter horror. Low and behold, it was the biggest disaster of my entire career. Not only did the cake batter bubble over out of the pan and onto the baking sheet, but it also caved in (big time) and the blueberries sank once again. The trifecta of cake mishaps. I threw the cake away, with the pan, slammed everything shut and went to bed. I lost hope. I started looking at other jobs, getting ready to stop blogging and photographing and baking and cooking altogether—I exaggerate for the effect. Before bed Julian (and through one last phone call with my mother) convince me to not give up and just try again. Take it slower and do it carefully, they said.

If it wasn’t for the fact that I already shared some photos of the process and got you all excited about this cake on instagram, I would’ve just scratched the entire idea and done something else. I realized though, that I couldn’t just leave you guys hanging. I promised you a blueberry pound cake and by George I was going to deliver one. So I woke up super early the next morning, took one last trip to the grocery store for some more blueberries—which I single handedly have kept the blueberry growers rich—and more cream cheese and almonds and a lemon. I get home and start for the fourth time. Although this time around I changed the recipe a bit by removing an egg, adding more butter, losing the baking powder and baking soda and calling it good, making sure to toss those blueberries in flour. I poured it into the pan, topped it with streusel and put it in the oven without much hope. One hour and a half later I had the most perfect pound cake I have ever made/seen. I let it cool (in a kitchen cabinet above the sink because Napoleon has gotten into the bad habit of trying to eat anything in sight) and did the biggest celebratory dance ever known to mankind. That is the story of my adventure of making four pound cakes in less than 24 hours. I have to say though, it all paid off. This cake is pretty epic.