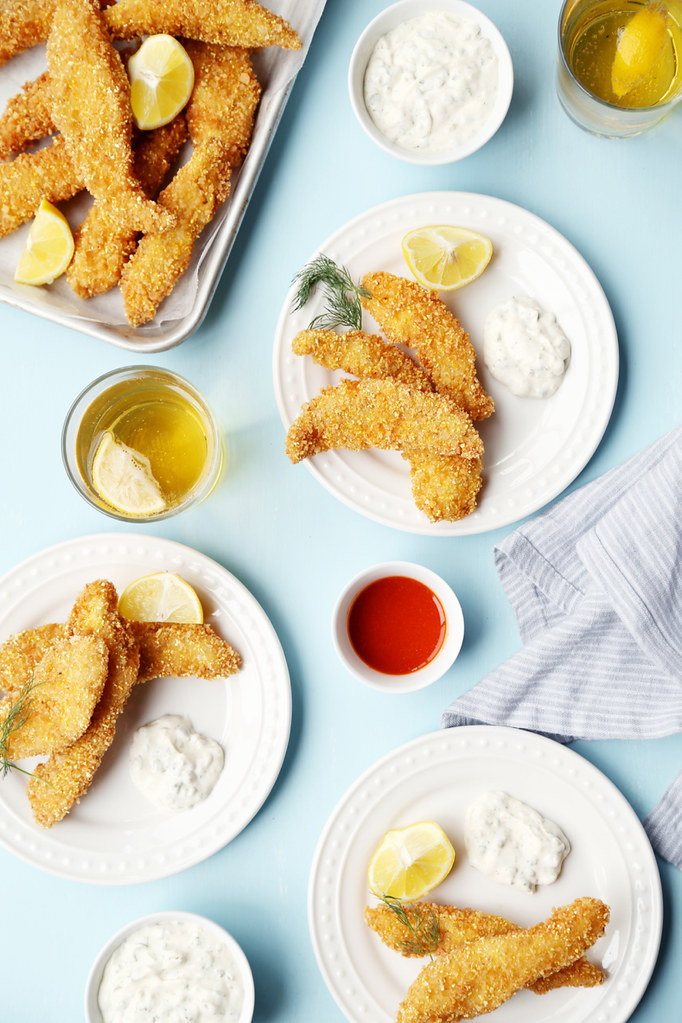 I have to admit that I hated fish sticks growing up as a kid. I wasn’t a fan, sorry mom. We had a lot of frozen fish sticks when I was a child. I think this was because my sisters really loved them and also because it was easy on my mamma who had to work a lot. I’d have to drown them in lots of lemon juice and ketchup just to make them vanish from my plate quickly. Yes, I ate my fish sticks with ketchup, don’t judge me. I was a weird kid what can I say? My mamma usually served the fish sticks with a side of white rice. I loved the rice part of the meal. Always. I could eat rice every single day of my life. I’d more often than not eat the rice first and leave the fish sticks for last. That’s how much I despised them. The funny thing is that when I got older, in my late teens and early twenties, something inside me just switched automatically. I’ve since grown to love them actually. I still get a craving for frozen fish sticks every now and then and every time I eat them, they remind me very much of my childhood. My mamma likes to rub it in my face now, never letting me forget just how much I hated them as a child and how vocal I was about it. That’s what moms are for, right? Laying that guilt trip on us. Thanks mamma.

I thought these crunchy fish sticks were the perfect start for my Seafood Week on the site because of my history with them as a child, but also because they are easy to make and don’t require too many complicated steps. I also wanted to listen to my mamma’s suggestion of adding more seafood dishes to the site because she’s right, it is time, and yes a lot of people are searching for seafood recipes on Fridays, especially now because of lent. I realized that if my mamma is searching for seafood recipes then other people must be searching for them as well. I needed to fix it and spice things up on the site.

So of course, as luck would have it. I’m now obsessed with fish sticks. Both the homemade version and the frozen variety I had and hated as a kid. Every now and then I’ll get a craving for frozen fish sticks though, and so I’ll buy a box from the freezer section of the grocery store and I’ll instantly think about the tantrums I’d throw as a child whenever I’d hear that fish sticks were on the menu. Of course now, I’m able to make them at home on my own so things are a bit different these days, but it’s still sort of the same thing. I’ve been whipping up batches of fish sticks and keeping them in the freezer at home for an easy dinner during the week. That way whenever I get a craving I just make a pot of rice and pour some ketchup into a small bowl for dipping—sure, I’ll make tartar sauce for dipping also, but somehow I can’t shake off the ketchup—and I’ll reheat my homemade frozen fish sticks and call it dinner. No regrets. So just in case you have the same love/hate relationship with these as I did, I thought I’d share my favorite recipe for Seafood Week. Stay tuned for the other recipes, they’re a bit healthier I promise. I just couldn’t resist a good fish stick fried until golden brown. Let’s eat more fish y’all!