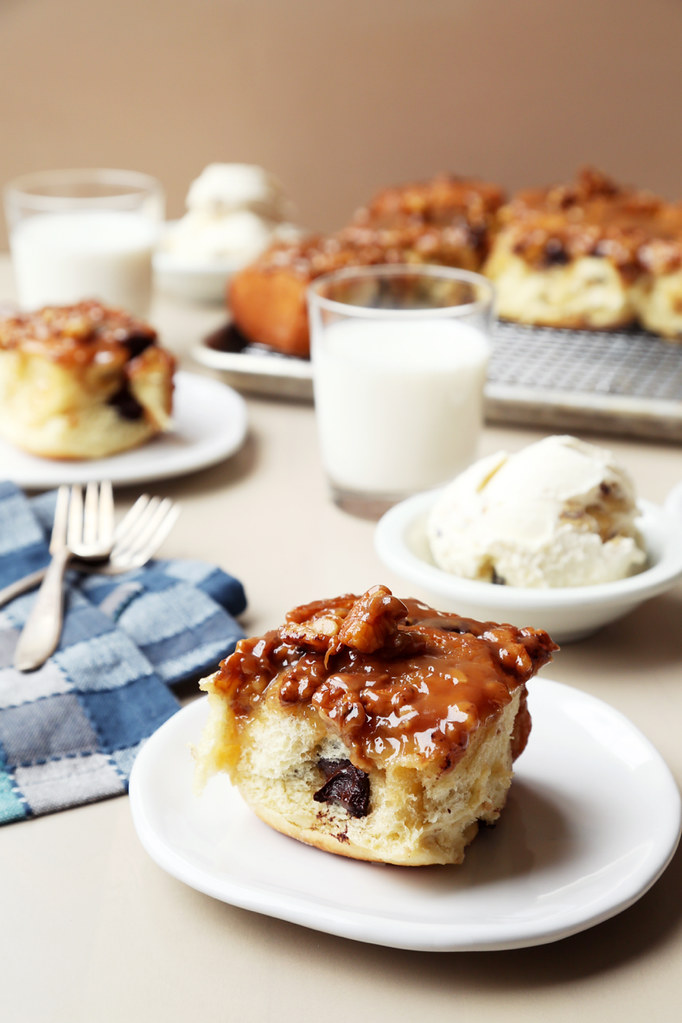 I’d never tried Ben and Jerry’s ice cream until I met Julian a couple years ago. It’s his favorite ice cream of all time. I don’t know how I went through my entire 26 years of existence without trying this deliciously irresistible treat. I guess you can say I was missing out on something incredible, on both aspects of my life. Needless to say, when I took that first bite of Ben and Jerry’s, I became hooked, instantly. Obsessed isn’t really an appropriate word to throw around. I feel like that doesn’t adequately describe my feelings for this icy cold dessert, so I won’t call it an obsession. I change my mind. Instead, let’s refer to this newfound love affair of mine as an admiration. I think that sounds better, don’t you? I still remember that first flavor I tried, Cinnamon roll. I picked it out of the crowd because cinnamon rolls are one of my favorite desserts, so I thought to myself, “Why not try a cinnamon roll flavored ice cream, Jonathan?! That sounds like the greatest thing ever invented.” So I picked it up and never looked back. After eating the entire tub in less than five minutes, I remember thinking I found my new favorite ice cream flavor, and nothing could change my mind. Nothing. As far as I was concerned, I’d only ever have eyes for that cinnamon swirl and no other ice cream could make me think otherwise. Then one day I needed to get my fix so I took a trip to the grocery store and the most horrible thing happened. All of the cinnamon roll Ben and Jerry’s was gone. GONE. Nowhere to be found. I almost cried. Okay, I cried. After I gathered myself together, I picked up chunky monkey instead (thinking ugh, what a subpar choice) and I instantly forgot about the other one. What was it again? I can’t even name it anymore. It isn’t worth it. Chunky monkey is life.

Confession time: This is actually the first time in my life that I’ve ever made sticky buns before. I know I know, I’m over here going on and on about sticky buns as if I’m some sort of sticky bun expert or something. Is it possible to become an expert after only making something once? Yeah I think so. Maybe I’m just saying this because I wan’t to be referred to as an expert of some sort. It’s been a life goal of mine and I think with this post I’ve earned it. (Humble brag). I’ve been wanting to attempt a sticky bun recipe for a very long time now, but something kept me from it. I think it’s the whole making of the caramel and inverting of the buns that really scared me. I still get nightmares every now and then. Plus I kept reading all these scary reviews online of people and their horror stories involving dry buns. That’s tragic. I remember thinking, how can sticky buns be dry? I didn’t have the strength or the courage to overcome that fear so I just kept putting it off. Until the other day when I was trying to figure out what to make and photograph for my post, to share with you guys. I started brainstorming all sorts of different ideas and this one crazy idea just wouldn’t go away. All of a sudden I was envisioning some sort of chunky monkey dessert. Mainly because I was really craving a pint of chunky monkey, but also because I love the flavor profiles, which deserve to be showed off all day every day.

Too many sticks of butter, a couple pints of heavy cream and a lot of brown sugar later, I came upon the ultimate sticky bun recipe and still wasn’t sure if it would go over well. I shared a few photos on instagram and it’s almost like you guys read my mind because you reassured me that everything was going to be alright. Y’all went nuts over a vision I got in passing and it made me realize that I should really listen to my instincts more often. It’s like my mamma always says, “You should always go with your first choice.” And so from now on that’s what I’m going to do, although sometimes my first instinct is to deep fry everything and somehow that doesn’t seem right…or healthy. So maybe I’ll practice this new rule in moderation. One thing that I won’t censor and moderate are these Chunky Monkey Cinnamon Rolls because I’m now convinced that this would be my last meal on earth. An entire pan right out of the oven because there’s nothing better than this in the entire world. Nothing.