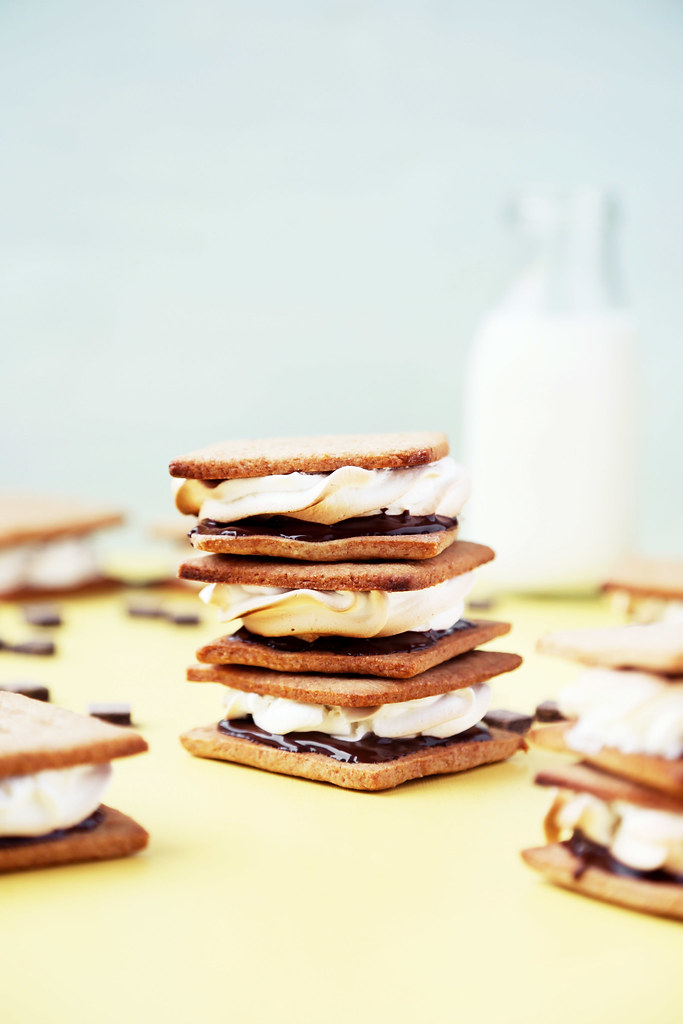 You know it’s summer when everyone on the internet starts talking about S’mores. All of the s’mores treats come out of the woodwork and I couldn’t be happier. It’s the one thing to look forward to during this time of year. It almost makes the hot days, with the sun beating down on you, bearable. Almost. Hey guess what…it’s officially the start of summer this weekend and I think we all should be celebrating this grand occasion with s’mores cookie sandwiches. It’s what the founding fathers of America would’ve wanted for us. In fact, they founded this country specifically so that later generations, ie you and I, would enjoy cookie sandwiches during the unbearably hot summer days. (Nope). Legend has it that Benjamin Franklin loved s’mores. They were his guilty pleasure! (Not really). So why don’t you and I be like my good pal Ben Franklin and eat s’mores all weekend long. We’d make him super proud, and I’m all for eating cookies and marshmallows and chocolate all warm and gooey, pressed together into a sweet sweet treat. I’m also all about making Mr. Franklin proud.

Aside from the beginning of summer, this weekend also happens to be Father’s Day. I know for a fact that fathers (and some mothers too who happen to do the job of both parents all by themselves, thank you very much) would go crazy for these cookie sandwiches. It’s like I always say, if they’re good enough for Ben Franklin, then they are certainly good enough for your dad. (I don’t really). So if you’re still in a panic, about to pull out your hair because you don’t know what to get your papa, I can help you out. Well first off, stop panicking. That’ll get you nowhere fast. Believe me I know. Get yourself in the kitchen and start making your old man these cookie sandwiches because they’re probably a hundred times better than any gadget you’ll find at the mall that your dad probably won’t ever use. Give him something he can actually enjoy.

Along with the start of summer and Father’s day, this weekend is also Summer Solstice (which makes sense because it’s what signifies the start of the season). It also happens to be the longest day of the year. You know what that means don’t you?!?! We have even more time to stuff our faces with all of the s’mores. All of them. Every single one. If that isn’t a miracle to end all miracles, then I don’t know what is. So this weekend I’ll tell you what you do. You grab your dad (and mom), sit out back, enjoy the summer, and celebrate the longest day of the year by eating s’mores all day and all night long. It’s what Ben Franklin would’ve wanted. (Probably not). 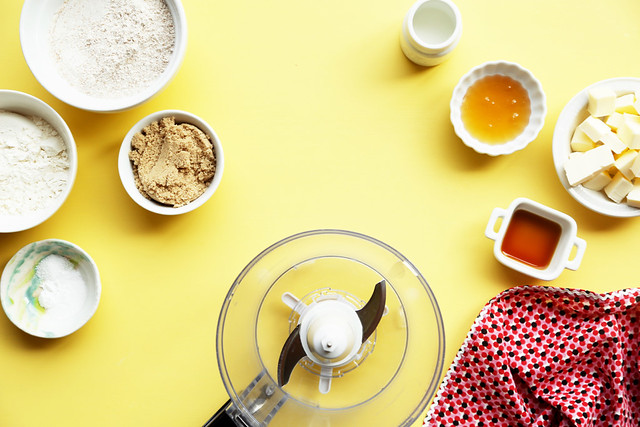 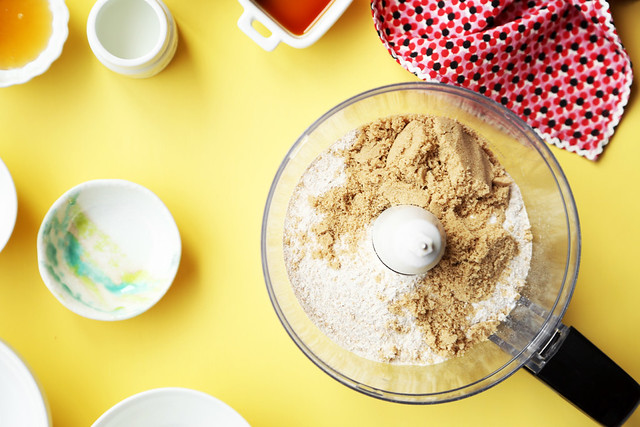 Start by pulsing the dry ingredients (flour, whole wheat flour, salt, baking powder and baking soda) in a food processor, or electric mixer, until well combined. Then add in the cold cubed butter. 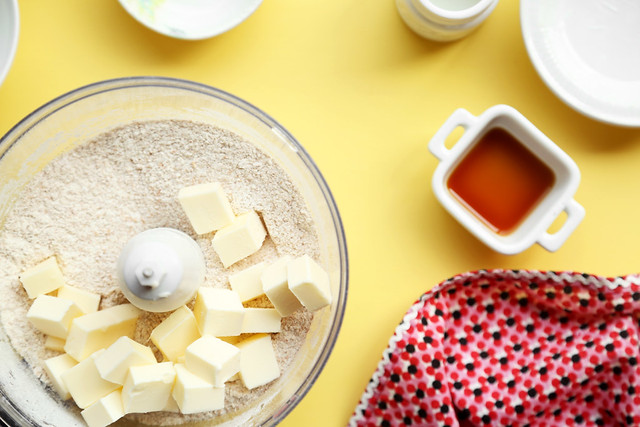 Pulse about 6 to 8 times, until the butter resembles coarse crumbs the size of peas. Add in the vanilla, milk and honey and blend until the dough comes together into a dough.

**Note: If you don’t have a food processor, don’t worry about it. Just use a mixer fitted with the paddle attachment. You can do it by hand, but it might take some elbow grease!** 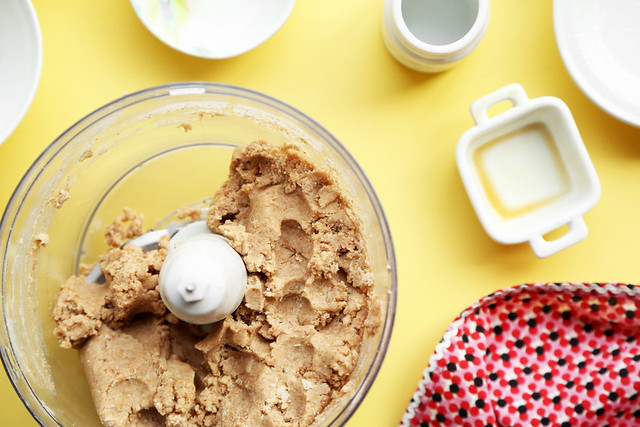 Wrap the dough in plastic wrap and place in the fridge until chilled, about 1 hour. You can do this overnight and allow to come to room temperature a bit the next day, before rolling out. Divide the dough in half, returning the half of it to the fridge while you work with the first half, and place on a lightly floured work surface. Roll out into a large rectangle about 1/2 of an inch thick. Using a pizza cutter, cut into 4×4 squares.

**Note: You can cut them as big or as small as you’d like depending on what size sandwiches you plan on making!** 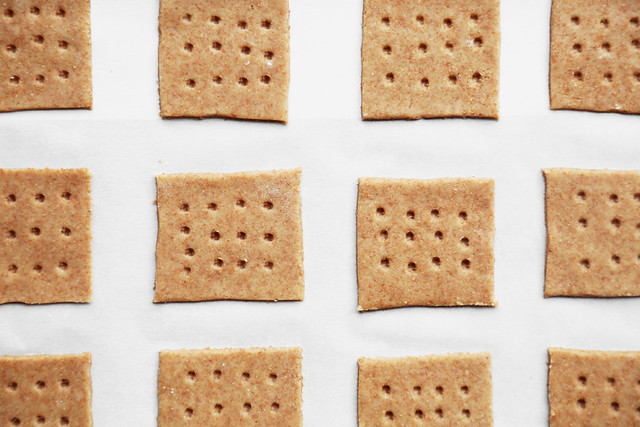 To give them that authentic “store bought” feeling, I used a large wooden skewer (the kind you use for kabobs) and poked holes on top of each cookie. Repeat with the second half of dough.

**Note: You don’t have to poke all the way down into the cookie. Small indentations are enough! Also, this step is totally optional, so don’t feel like you have to do it.**

Bake in a preheated 350ºF oven until lightly golden brown around the edges, about 12 to 15 minutes. Remove from oven and allow to cool down completely on a wire rack. 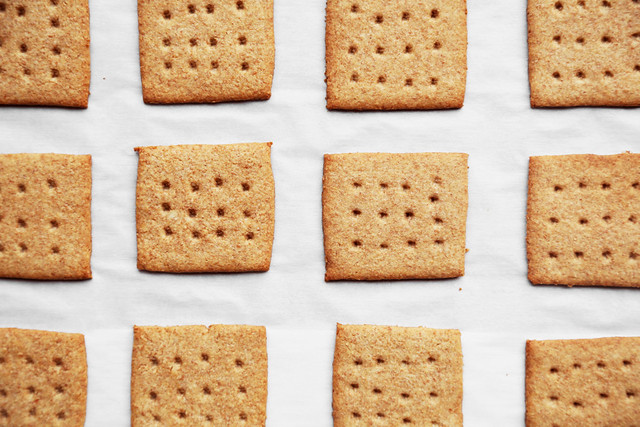 While the cookies cool, let’s make the toasted marshmallow frosting. Place the egg whites, sugar, cream of tartar and salt in a super clean bowl of an electric mixer.

**Tip: It’s important that your eggs whites be at room temperature as it’ll allow them to fluff up properly when beaten. Also, make sure your bowl is super clean and dry before adding the ingredients. Any dust or particle might affect the egg whites.** 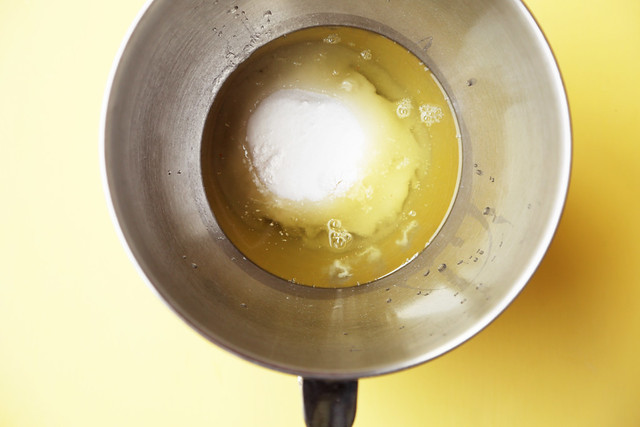 Place the bowl over a pot of simmering water, making sure that the bottom of the bowl doesn’t touch the water, and cook until the sugar has dissolved, about 6 minutes.

**Note: Make sure to whisk constantly at this stage. You don’t want the egg whites to start cooking. We’re just looking to warm the mixture slightly and dissolve the sugar!**

Remove the bowl from the pot and place on your stand mixer. Whisk on medium until frothy, about 1 minute. Then turn the mixer to high and beat until stiff, glossy peaks form, about 5 minutes. The frosting should stand on its own when you lift the beater upside down. Add the vanilla and mix until combined. 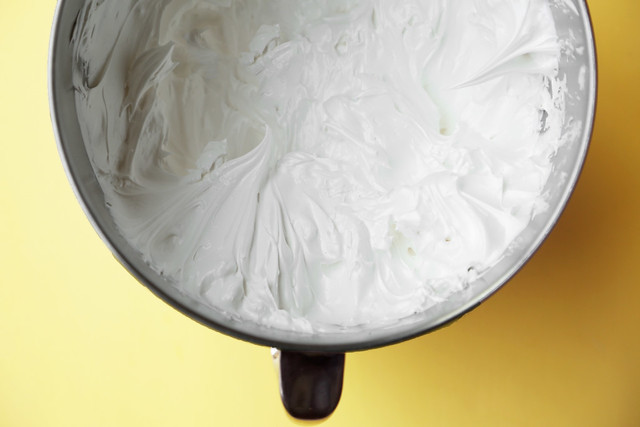 Once the graham crackers have cooled, let’s turn our attention to the chocolate. I just melted some dark chocolate over a double boiler. Nothing too fancy. Fill a pastry bag, fitted with a large star tip, with the marshmallow frosting and pipe out some of the frosting onto half of the graham crackers. 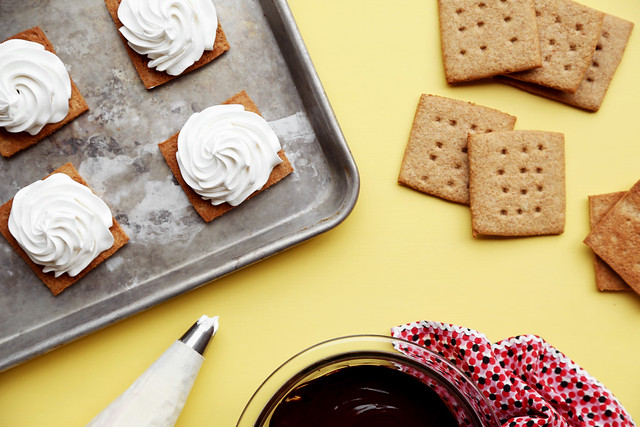 If you have one of those small kitchen blow torches, toast the marshmallow frosting until golden brown and dark on top.

**Tip: If you don’t have a torch, just place the cookies under the broiler for about 30 seconds or so. Make sure you watch it the entire time as it’ll burn fast.** 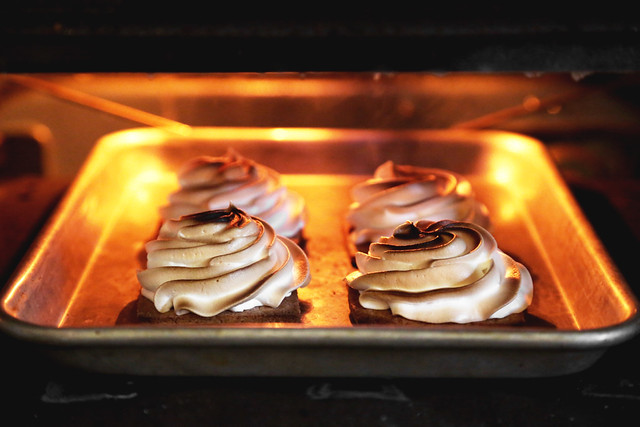 Carefully remove the tray from the broiler and allow to cool slightly. Spread the other half of the graham crackers with the melted dark chocolate. 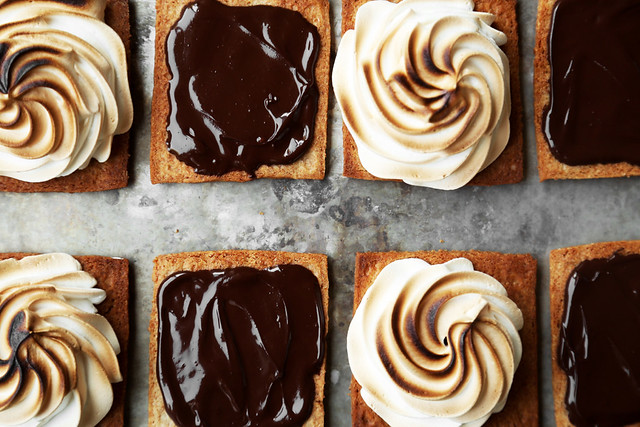 Sandwich the two sides together and devour immediately because as we all know, s’mores are most delicious when they are warm! 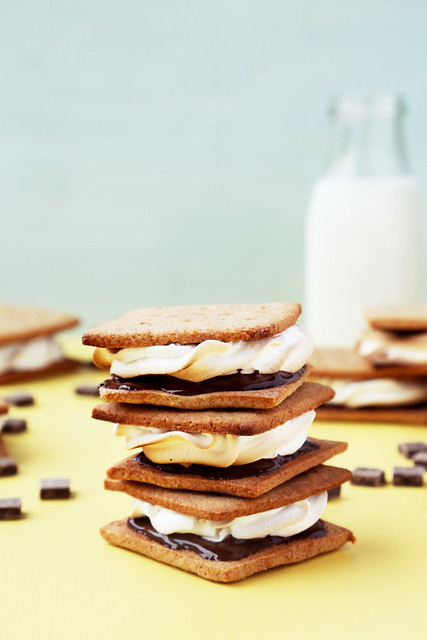 Any leftover cookies can be well wrapped or placed in an airtight container and kept at room temperature for up to 2 days. You can place them in the fridge for up to 4 days.

**Note: As the sandwiches sit in an airtight container or wrapped in plastic, the moisture from the frosting and chocolate will cause the graham crackers to soften. That’s okay. You’ll just have soft cookie sandwiches. One way to prevent this is to eat ALL of the cookies all at once.** 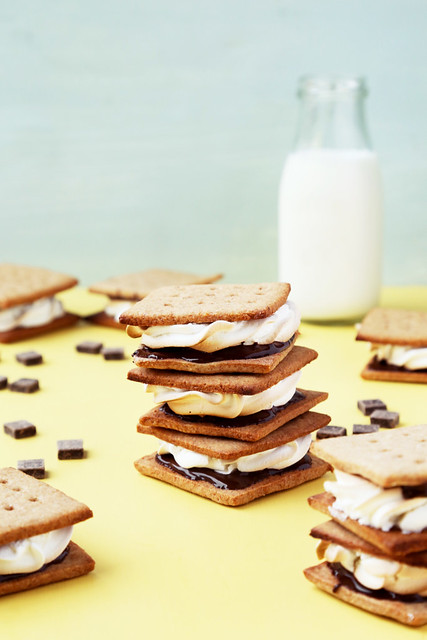 You can make the graham crackers a few days in advance, if you want to make it easier on you. That way the cookies will be ready on the day you plan on serving/eating them. 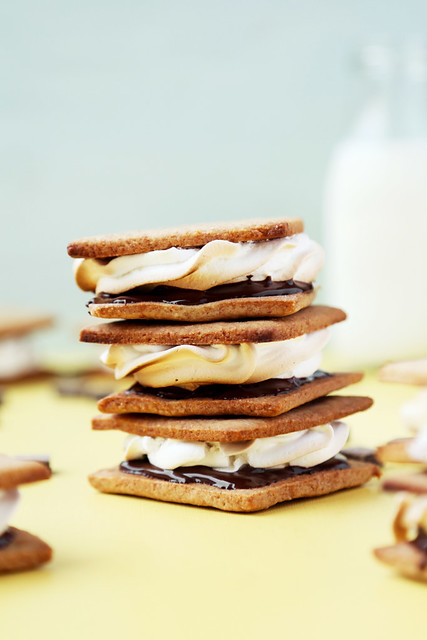 You can also dip half of the sandwich into the melted chocolate and sprinkle the top with toasted almonds. It’ll take them over the edge, but sometimes we need over the edge desserts to make us feel better. Nothing wrong with that. I say go for it. 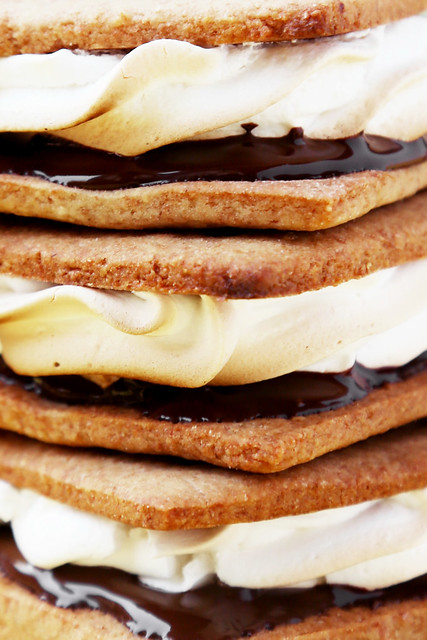 This summer no matter what you do, no matter how many drinks you drink or how many times you BBQ outdoors, there’s one thing you just HAVE to do, and that’s make these s’mores cookie sandwiches. You’d be doing yourself a disservice if you don’t. You’d be doing your country a disservice….okay maybe not. Just make them, okay? Get in the kitchen and make some cookie sandwiches to celebrate summer. And if you happen to eat all of them, so be it. That’s what summer is for. Enjoy! 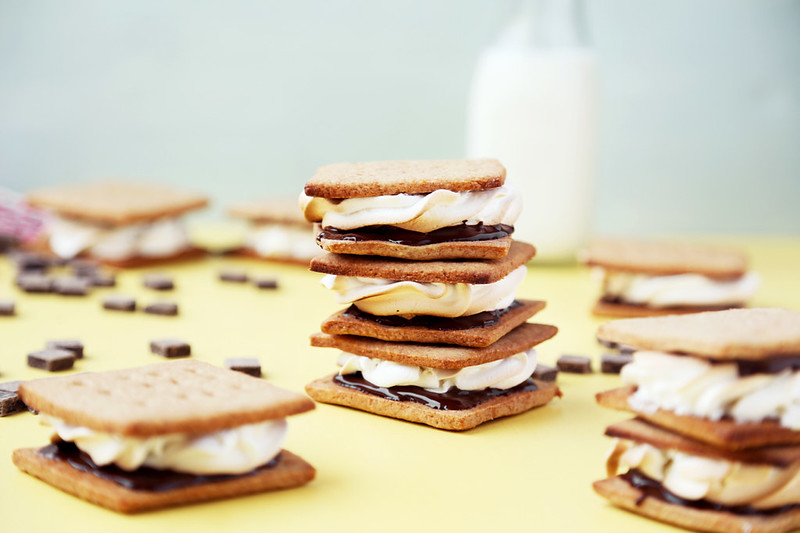 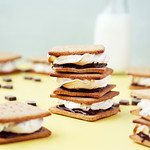