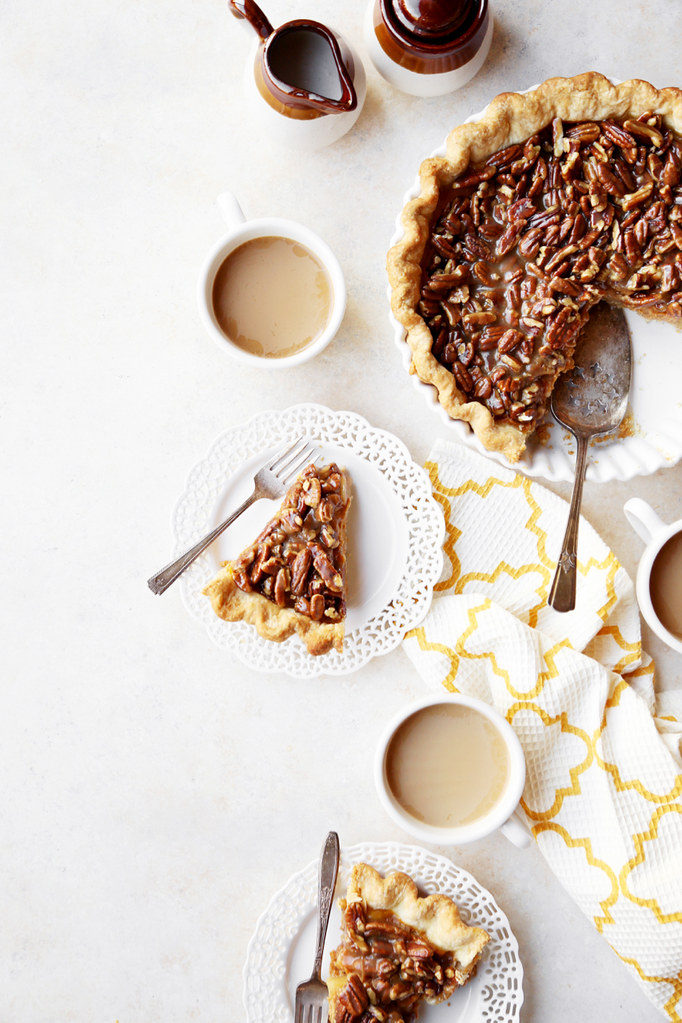 Let’s talk about the ULTIMATE Thanksgiving pie. I don’t know if any of you are like me and are sometimes plagued with doubt and uncertainty when it comes to pie. I never know what pies to make for Thanksgiving. I always make a pumpkin pie for sure. That’s a hands down, a given. Where I really struggle on making a decision is the second pie. I ask myself questions like, should I just make another pumpkin pie? Should I go classic Americana and do an apple pie? Should I turn to my imaginary Southern roots and make a pecan pie y’all?! I never know! Each year I’m pulling out my hair, asking everyone I know (and even random strangers at the grocery store) what kind of pie should I make this year?! I’m grabbing them by the collar and shaking them for an answer. When I come to, I realize I’ve just scared the life out of this helpful grocery store patron. Something has to be done.

This year I promised myself I wouldn’t hop on that crazy emotional roller coaster again. Never again! What can I say? I take my Thanksgiving pies very seriously. Is that weird? Anyhow, so the only logical answer to my dilemma was to bring three classic pies together into one mega super pie. A pie to end all pies. This pie starts with a layer of spiced caramel apples topped with a layer of pumpkin pie and finished off with a pecan praline layer. It seriously doesn’t get any better than this. So this year as you’re mapping out your recipes for the big day, consider blowing everyone of your guest’s minds with this pie. They’ll go home and tell everyone about it, and you’ll be the greatest Thanksgiving Day Hero in history. So go on and be the Thanksgiving Day Hero I know you can be. 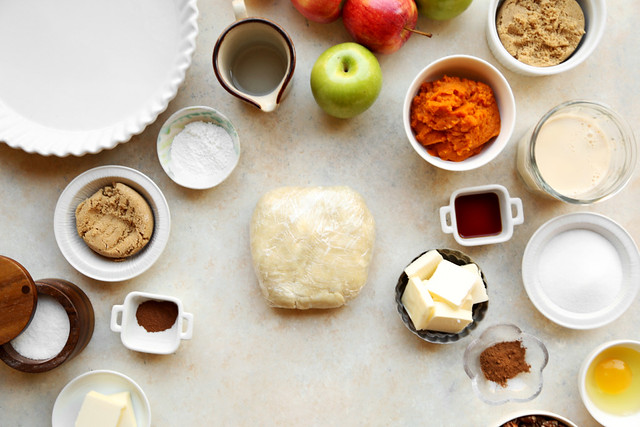 There are quite a few steps in this pie, let’s just get that out of the way now. I want to be honest with you right from the beginning. With that being said, however, it’s not necessarily a hard pie to make, there are just a few steps to get through before we get to devour the pie. The first one is to make pie dough. Any basic pie dough recipe you have on hand. If you’re in need of a great flaky pie dough recipe, you’re in luck because I happen to have one that I’ve used numerous times, like in this Shepherd’s Potato Pie recipe.

**Note: If you don’t have time to make pie dough from scratch, or you just don’t want to because you already have a million and one things to do on Thanksgiving, just grab some store bought dough. I won’t tell anyone.** 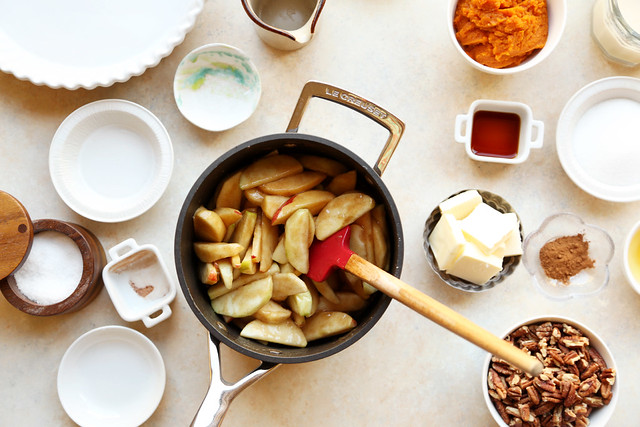 Let’s start with the apple layer. In a medium saucepan, combine the brown sugar, cornstarch, cinnamon, salt, water and Real Butter. It has to be real butter. Promise me. Bring to a simmer, stirring until fully incorporated. Add the peeled and sliced apples and simmer until tender, about 4 minutes. Remove from the heat and set aside to cool.

**Tip: You can use whatever tart apples you like. I love mixing tart and sweet apples for that complex flavor combination. Try using Granny Smith and Fuji for this pie!** 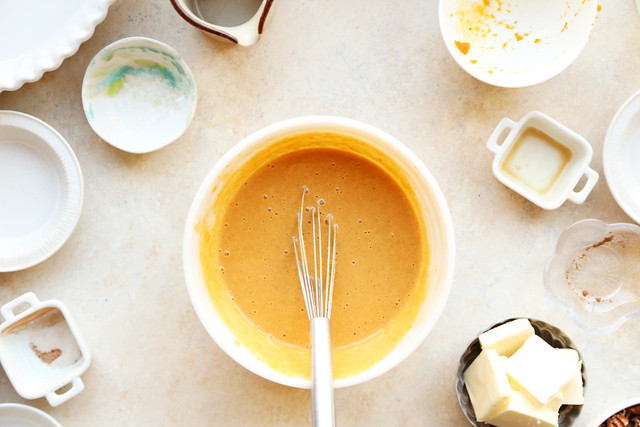 Roll out the pie crust and lay it into a pie plate. Trim the edges and then crimp them to make it look good because we’re not animals. If you don’t know how or can’t crimp, then just grab a fork and make a little pattern design around the edges. 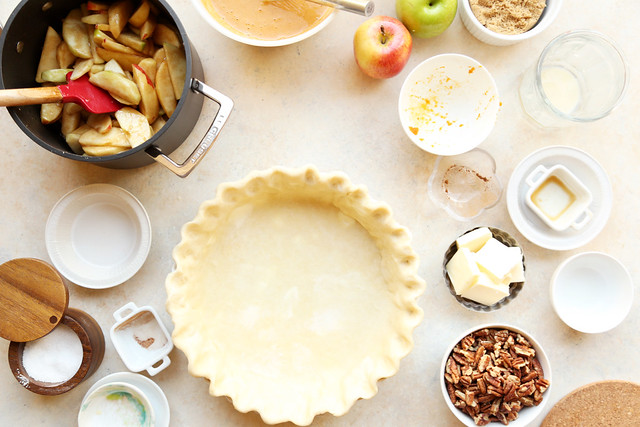 Pour the apple layer into the pie crust and then spread them out into an even layer, as best you can. 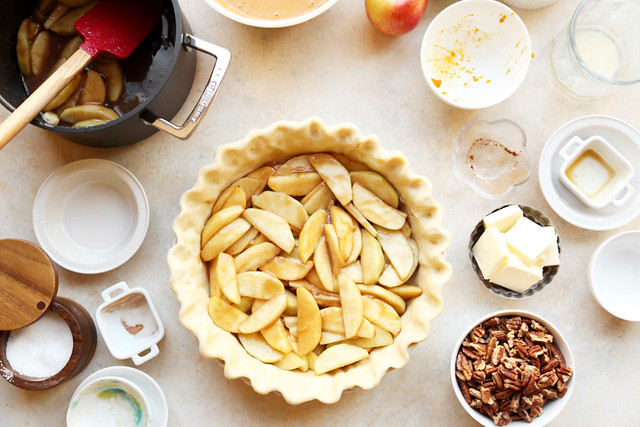 Then pour the pumpkin mixture over the apples. You might have to lift a few apples here and there to make sure the pumpkin gets into all of the nooks and crannies. 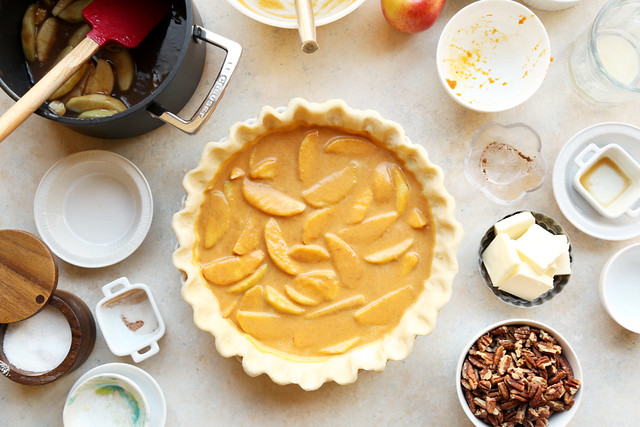 Bake the pie until golden brown and set in the middle, for about 40 to 45 minutes. Depending on your oven, it might be a little less or a little more. It’s tough sometimes to determine because oven temperatures can be vastly different.

**Tip: If you notice that the crust is getting too brown before the center is fully cooked, you can cover the pie with foil!** 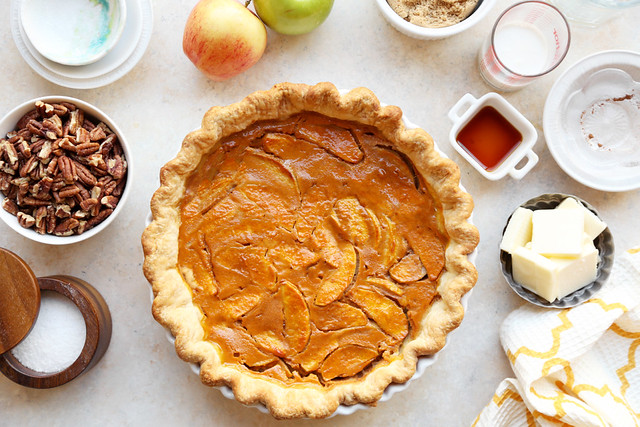 Remove the pie from the oven, set on a wire rack, and let cool completely before proceeding to the next step.

**Note: The Pie will look a little crackly on top. Yes, crackly. That’s okay. You might not understand that right now but when you make it and see your crackly pie, you’ll be like “Oh! This is what he meant by crackly!”** 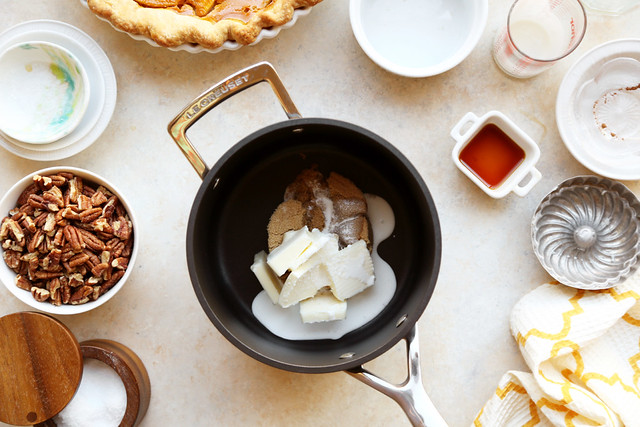 While the pie cools, let’s turn our attention to the pecan pie layer. Let’s make a quick caramel-like mixture. In a medium saucepan, add some more real butter, brown sugar and heavy cream. All the fats. Stir and cook until melted and bubbly. Let cook untouched for about 5 minutes. Remove from heat and stir in the salt, vanilla, and chopped pecans. 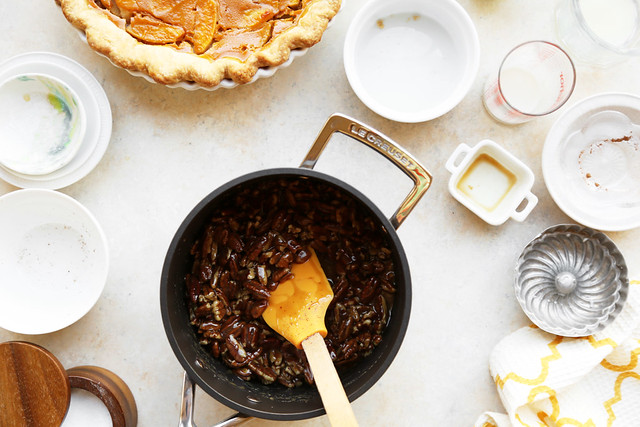 **Note: Don’t chop down the pecans too much. Leave some whole, and chop about half of them. I think it looks nice when there’s a mixture of both.**

Pour the pecan layer onto the cooled pie and spread it out into an even layer. Allow to set before cutting. I pop my pit into the fridge at this point because I LOVE LOVE LOVE my pumpkin pie chilled. It’s the only way I eat it. Plus, it makes it easier to cut and serve when it’s cold. 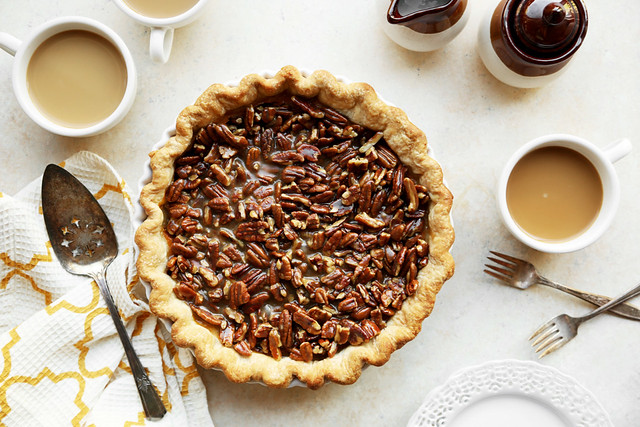 Thanksgiving is hectic enough as it is, what with all of the cooking and what not. I recommend that you make your life easier by baking your pies/desserts the night before! One less thing to worry about. Make this pie the day before, pop it in the fridge and keep it there until ready to serve after feasting on turkey and sides and bread. 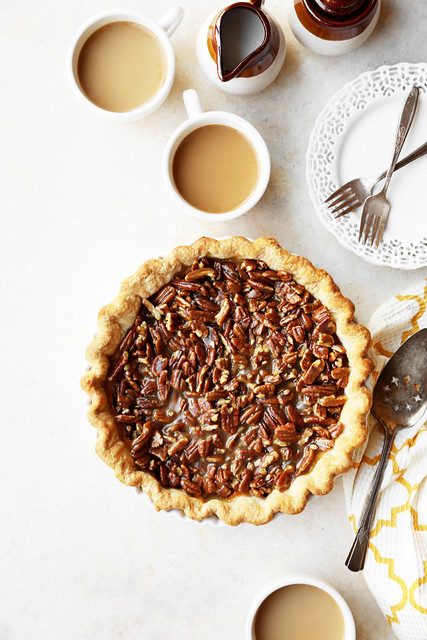 If you want to go all the way and serve the pie with ice cream or a maple cinnamon whipped cream or something like that, who am I to stop you from doing that?! I say go for it because why not?! You only live once. Plop that whipped cream on top of your second slice of pie. 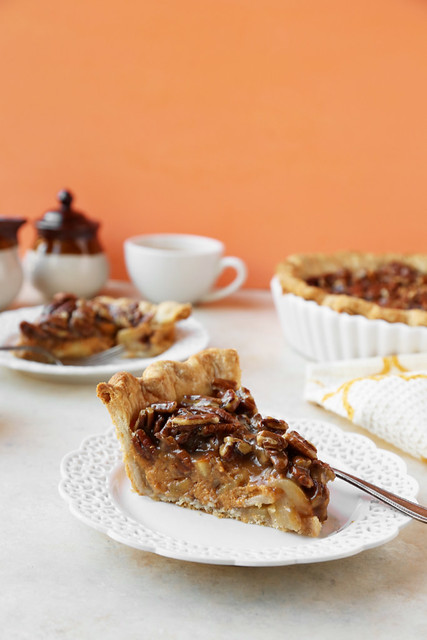 To get the recipe for this delicious pie head on over to the GO BOLD WITH BUTTER site! Follow them closely, if you’re not already, because I contribute 2 recipes a month to the site. I don’t usually share the recipes on my blog, but in this case I had to because this pie is a dream! A DREAM I TELL YOU! Click here for the recipe, go out and buy all the butter and get to baking! What are you waiting for?! 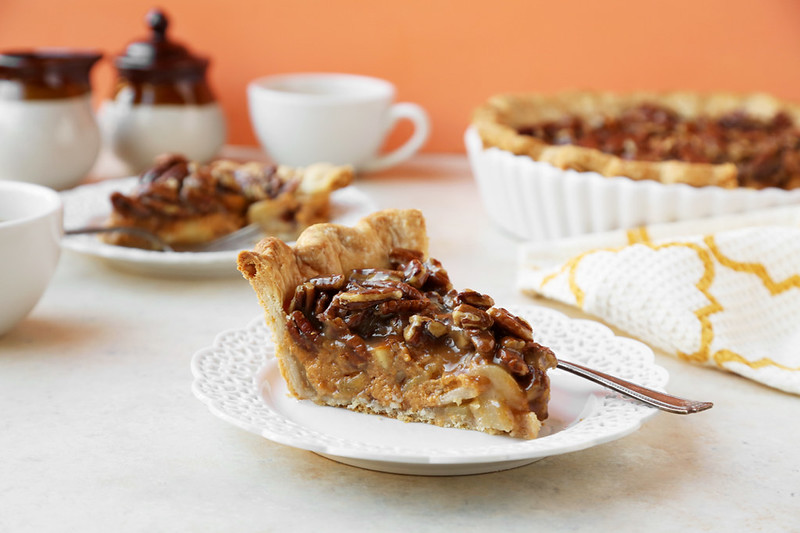 Thank you for supporting sponsored posts like this one right here, they help keep the site going so that we can continue to have fun together and gush over things like butter, cheese, potatoes and doughnuts! All opinions are my own, and I take great measures to make sure my partnerships are meaningful and true to me.